City of Departure From Ireland For Thomas Campbell April 1, 1807
And Alexander Campbell September 21, 1808 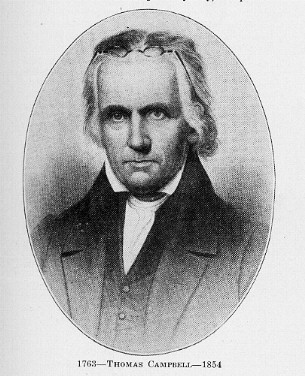 When Thomas Campbell left Northern Ireland for America in 1807, he departed from Londonderry on the shipping vessel, Brutus. An excerpt of its reference is noted below from Memoirs of Alexander Campbell. Alexander, his mother, Jane and siblings followed in September, 1808 from the same harbor. The river Foyle, flows from south to north, entering the Irish Sea at Magilligan Point.

In 2011, your web-editor and family visited in Ireland for two days. Traveling 750 miles, many of the sites mentioned in the writings of Alexander Campbell in reference to his youth were hotspots on the journey. This page shows some of those sites. 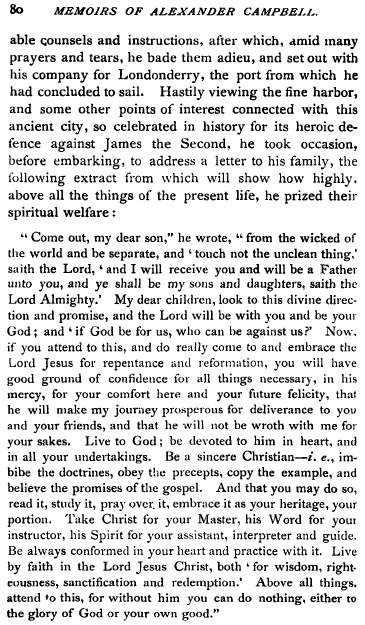 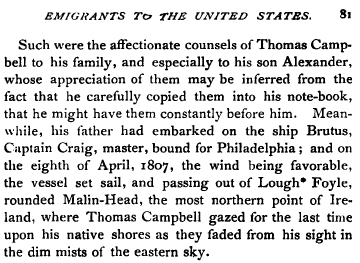 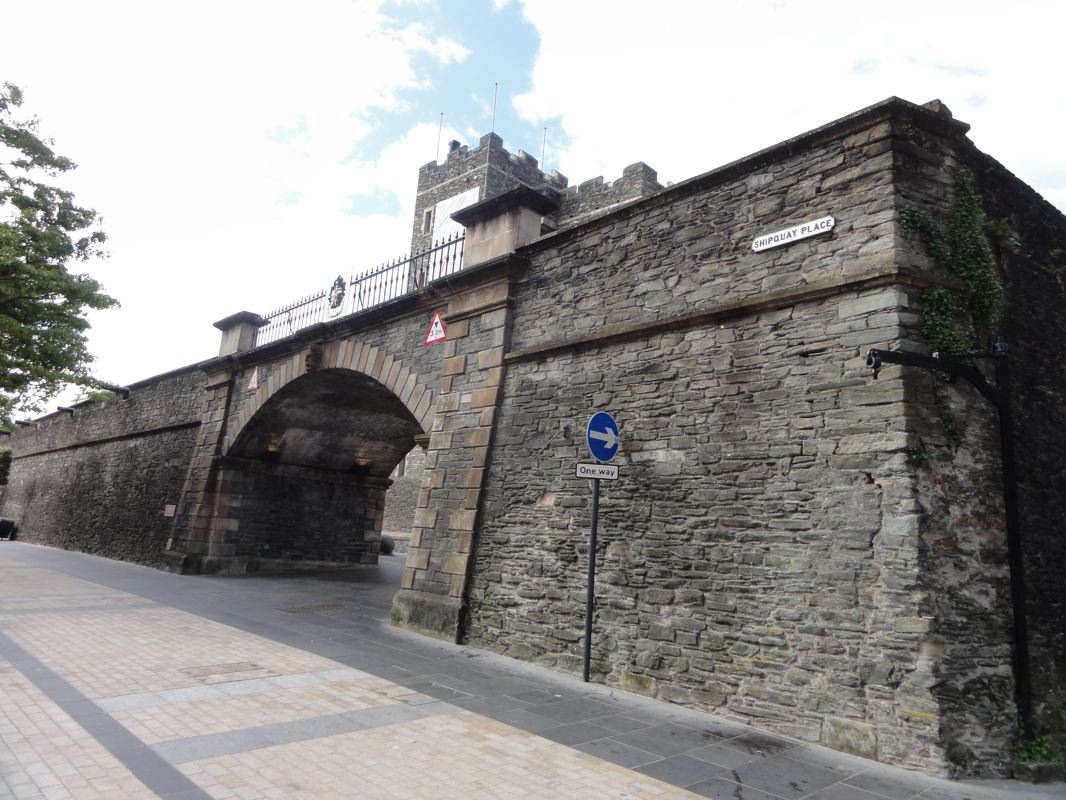 The Old Walled City of Londonderry

Panoramic View of Gate To Old City
Click on picture to zoom in! 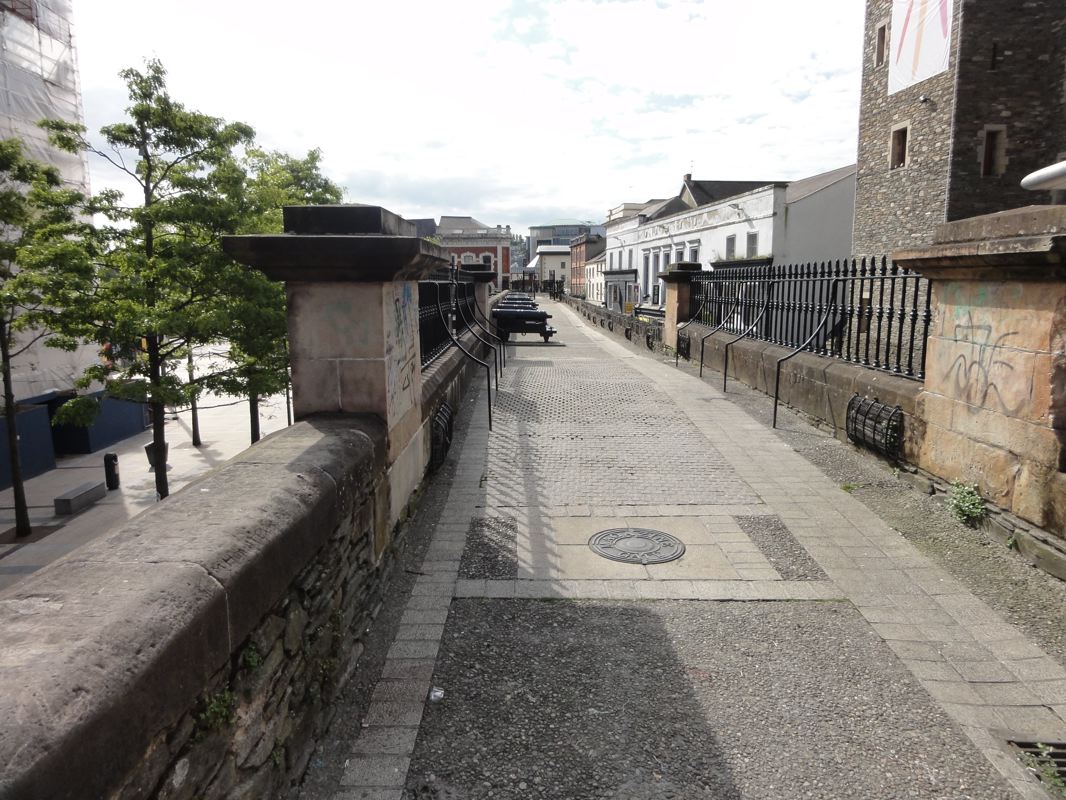 On Top Of The Walls Surrounding Old Londonderry, Northern Ireland 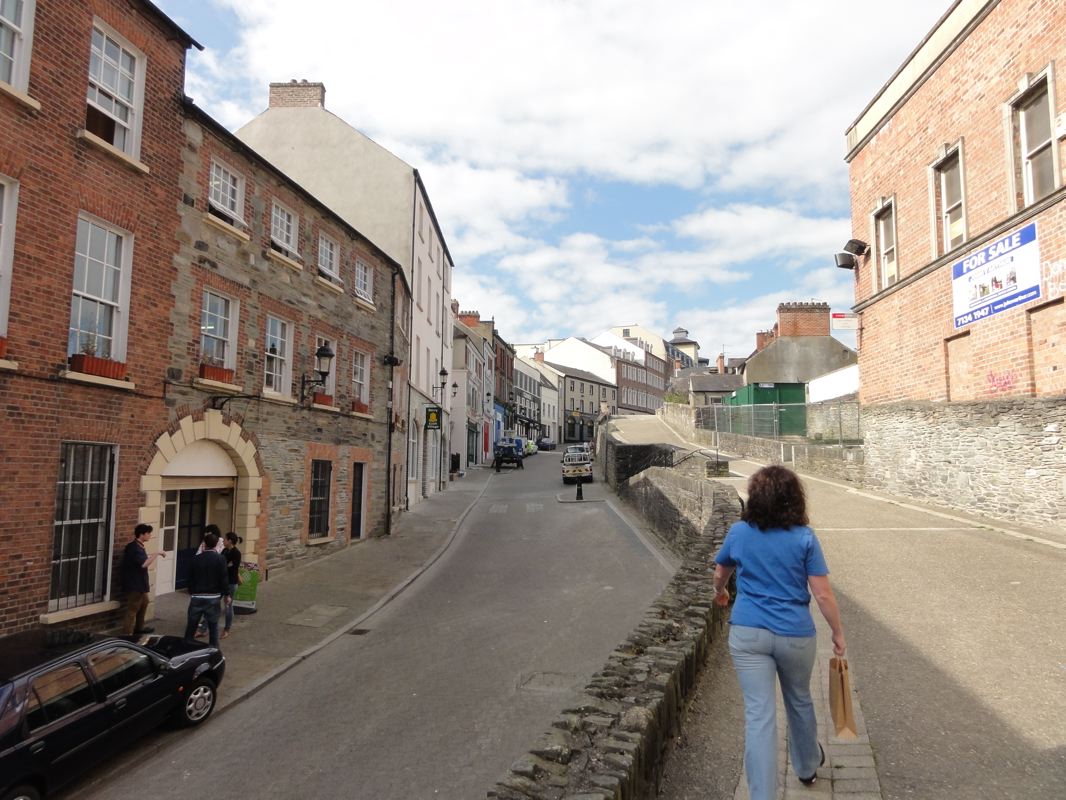 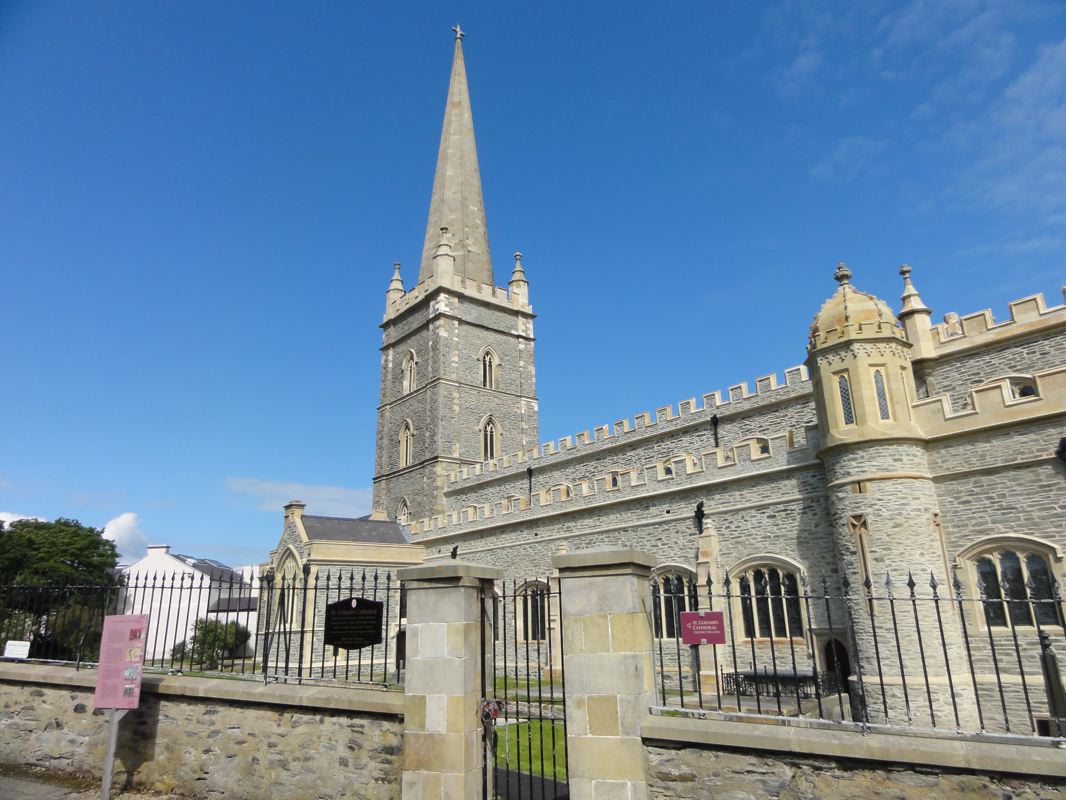 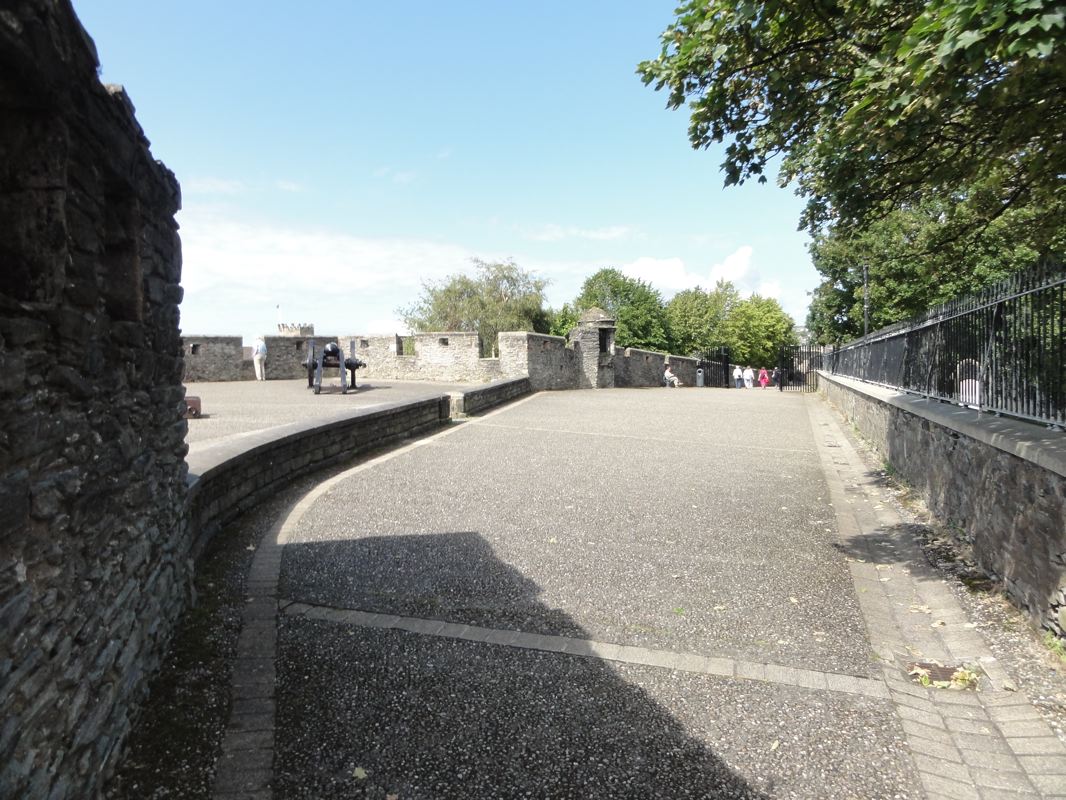 21 Year Old Alexander Campbell Visited Londonderry To
Prepare For Passage Of His Mother And Siblings, Summer, 1808

As soon as all were convalescent, preparations for departure were resumed, but it was August before they were completed. On the 20th of this month Alexander set out on horseback for Londonderry, to make arrangements for their embarkation. The distance being sixty miles, he was occupied two days in making the trip, greatly admiring, as he passed along, the beauty of the scenery, now enhanced by the contrast of the golden grain-fields with the green-meadows and pasture lands. Upon reaching the city, he stopped at an inn belonging to a Mr. William Wilson, merchant, and proceeded to make inquiry in regard to vessels for America. He took this opportunity to visit also those parts of the city and its vicinity which had been rendered interesting by the memorable siege. The place was shown where Lundy, the treacherous governor, who was disposed to surrender the city, let himself down from the wall by the assistance of a pear tree, and made his escape to the enemy, to avoid being torn to pieces by the citizens. Upon his departure, Baker and Walker were elected governors, and the most vigorous measures adopted for de fence. For many weeks all the efforts to take the town by storm were gallantly repulsed; upon which the siege was changed into a blockade, and all the avenues of assistance carefully secured. The supplies in the city were short, yet the people manfully held out, even when they had to assuage their hunger by gnawing salted hides, when rats became dainty fare, and dogs, fattened on the blood or the slain, were luxuries that few could purchase-– the price of a whelp’s paw being, as Macaulay informs us, five shillings and sixpence. At length, at the end of one hundred and five days, the boom stretched across the Foyle, a mile and a half below, was broken by ships bearing provisions, and the city, which by no art could have held out two days longer, was happily saved. Alexander found the walls very high, especially next the sea, and so broad at top that a coach and four could be driven upon them, though, At the time of the siege, the defences were in a very poor condition. He was pleased with the wide streets, the old-fashioned houses, and particularly with the fine public square, upon which fronted some of the best houses in the city. He visited the place where the great boom had been stretched across the Foyle, and saw the rugged mass of rock to which it had been attached upon the left bank by a cable a foot thick. Near by was also the well from which the besiegers drank, and the burial-ground where they laid their slain, and where the spade of the gardener occasionally still turns up some of their mouldering bones. Having completed his examinations, and visited the vessel in which he expected to sail, he made a conditional engagement with the captain, and returned home after what was to him a very pleasant excursion. 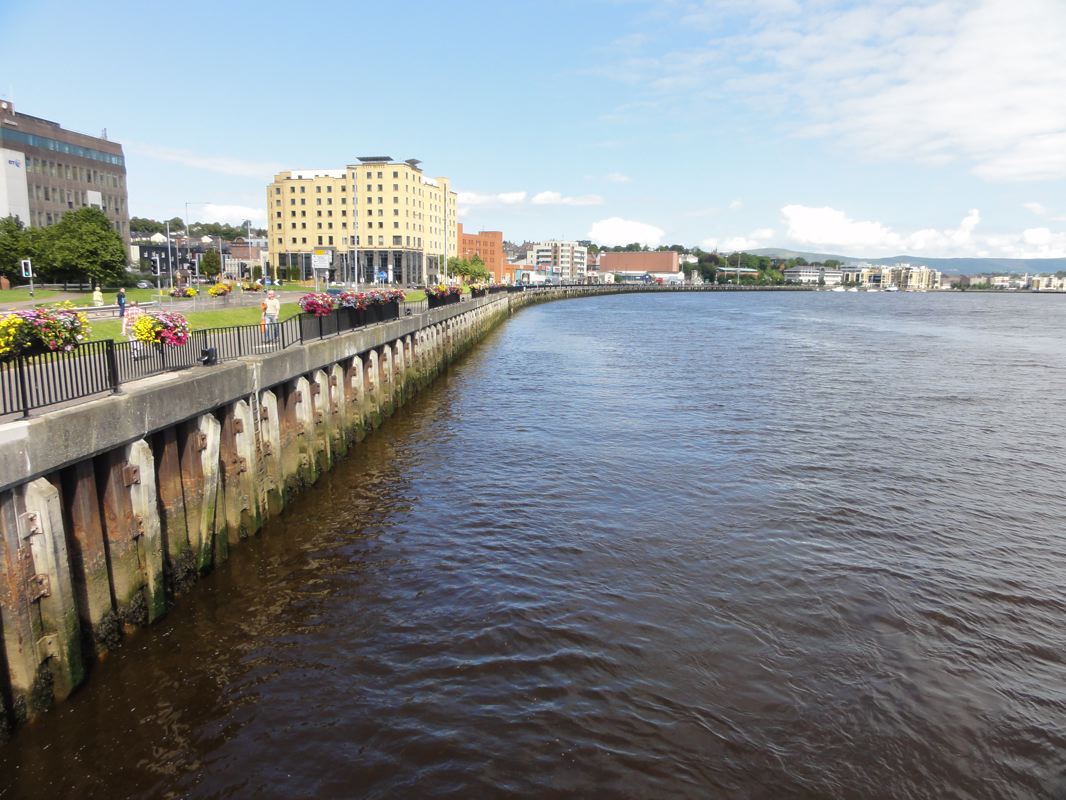 Thomas Campbell boarded the Brutus, Sailing vessel on 8.04.1807 From This Wharf
Alexander, his mother Jane & his siblings leave this same wharf in September 1808
Little did they know that they would be ship-wrecked within days.

No ships leave this harbor for the new world as they did in the early 18th and 19th centuries. This new walking bridge was
opened in July, 2011, just days before our arrival. However in the old days, ships were all along the wharf you see here. 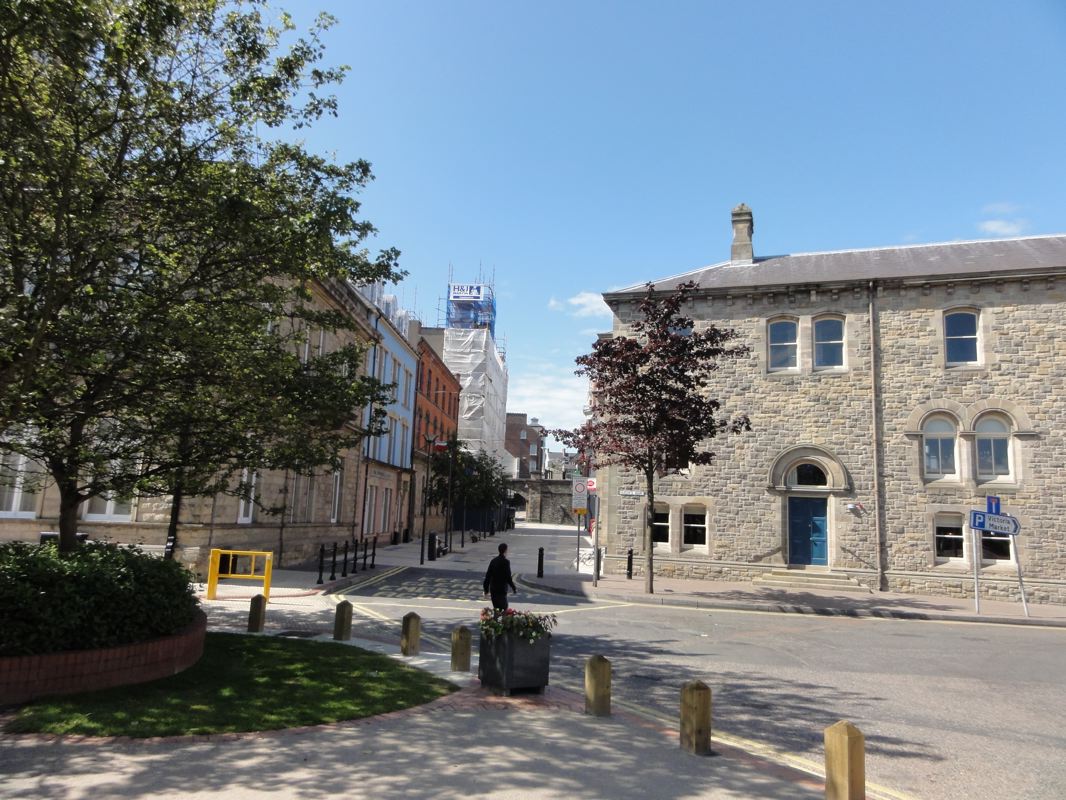 Entering Toward City Walls Of Londonderry From The Wharf 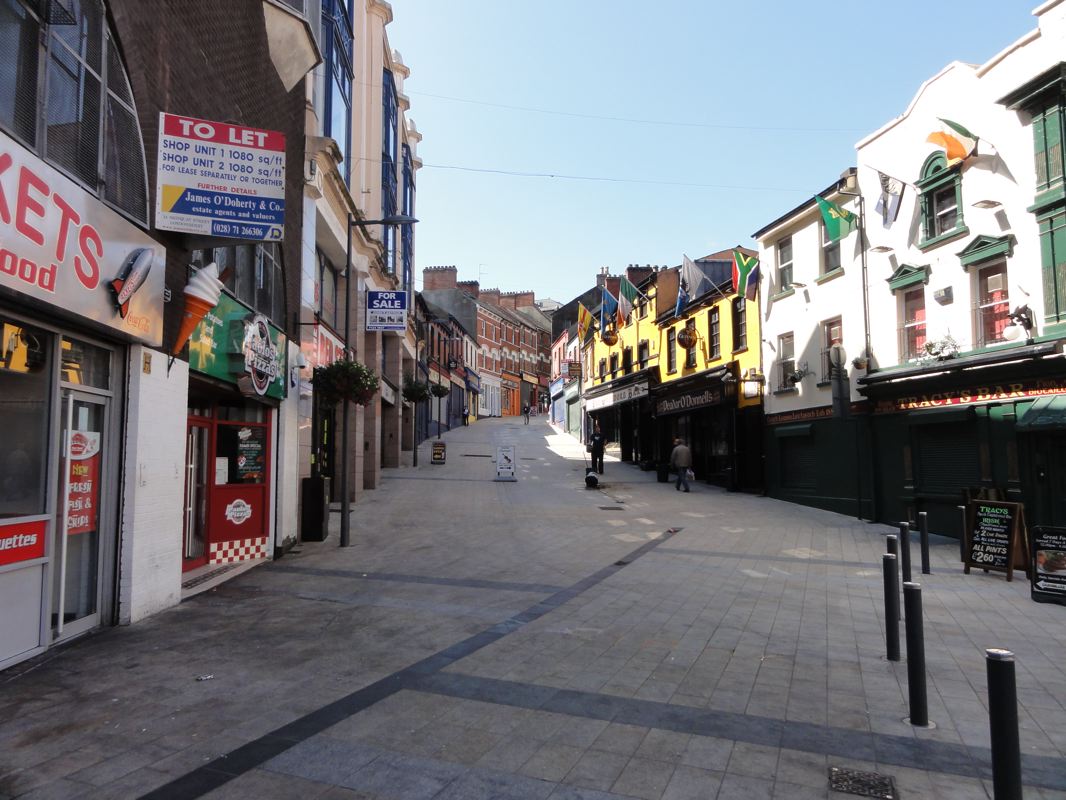 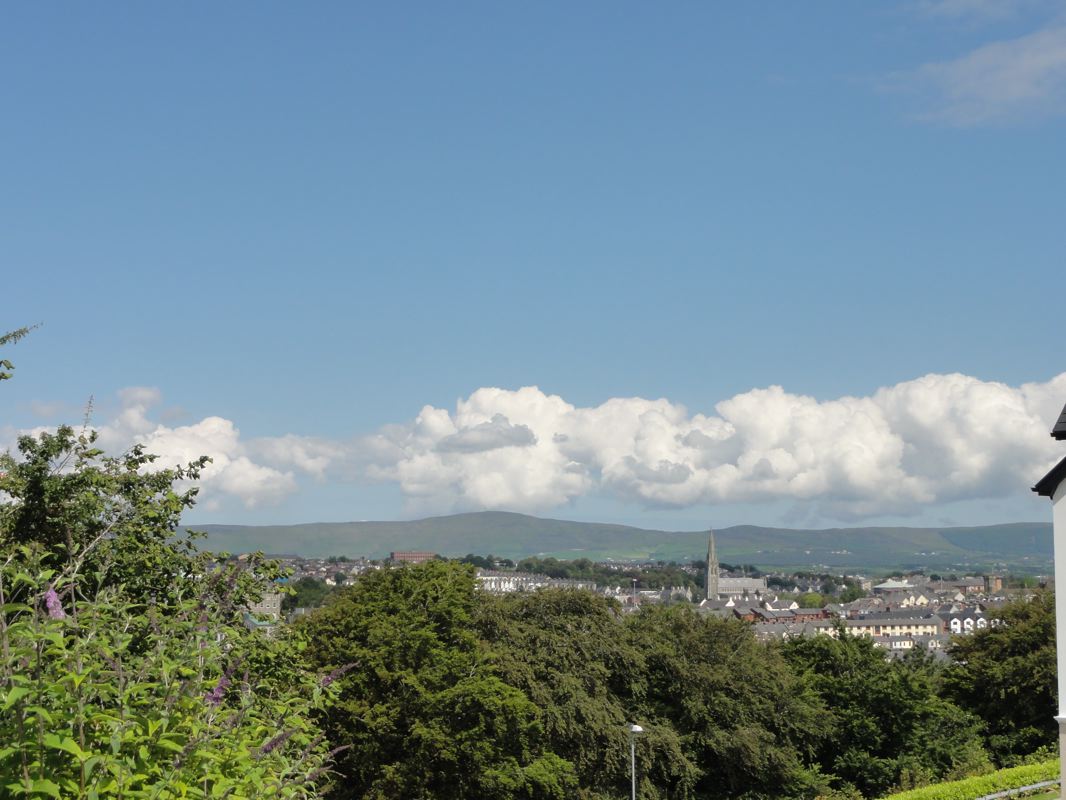 Londonderry From A Distance In The South

Plans For Departure From Northern Ireland By Alexander Campbell

After a week's visit to Dublin, Campbell returned home to ready the family for their trip in September, 1808. Note the following: 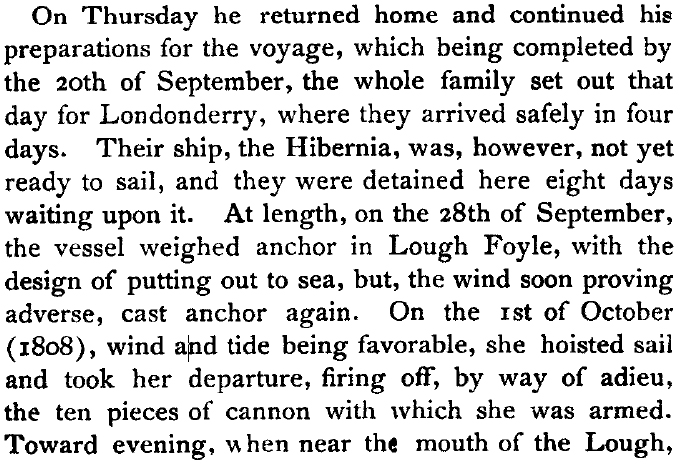 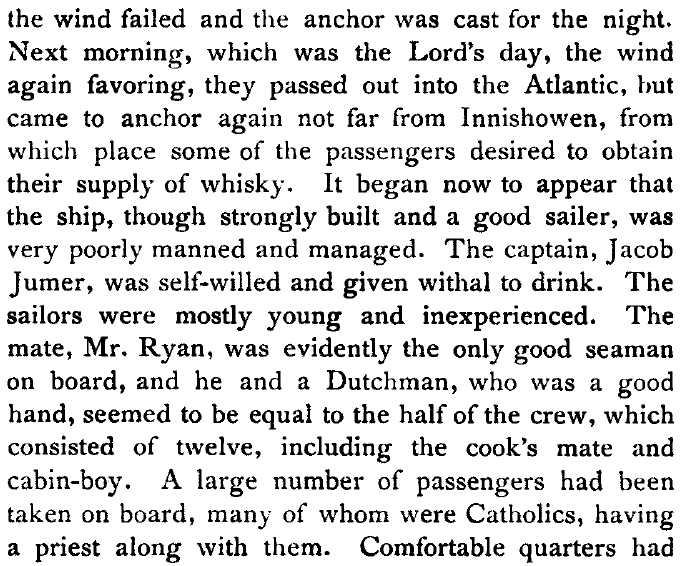 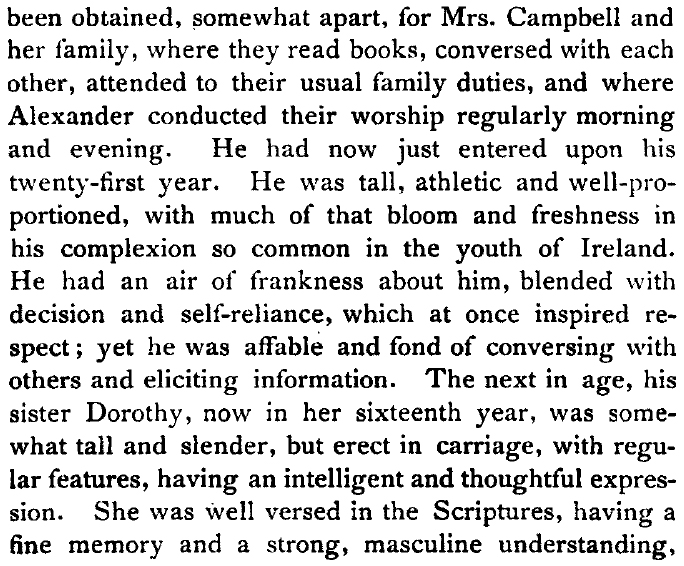 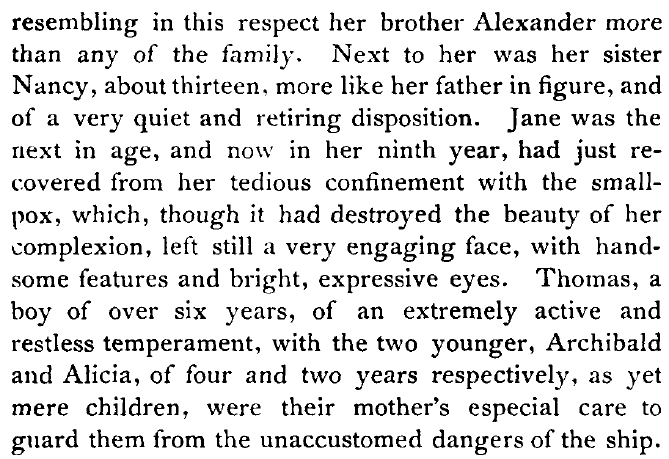 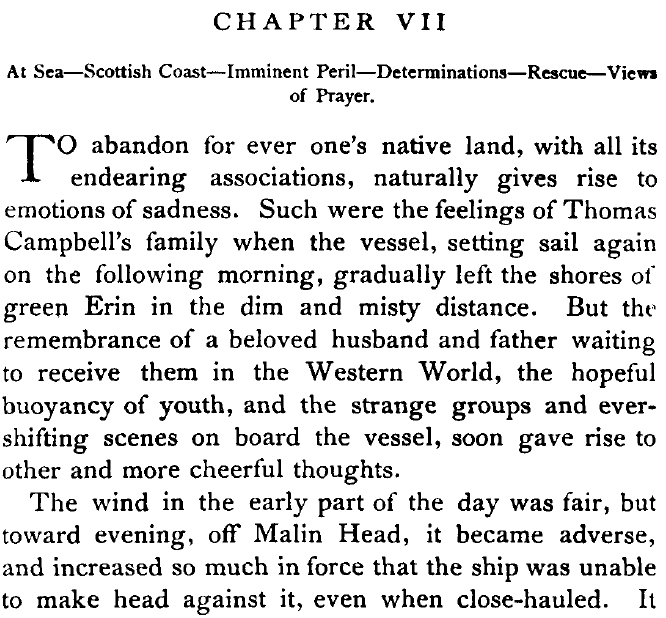 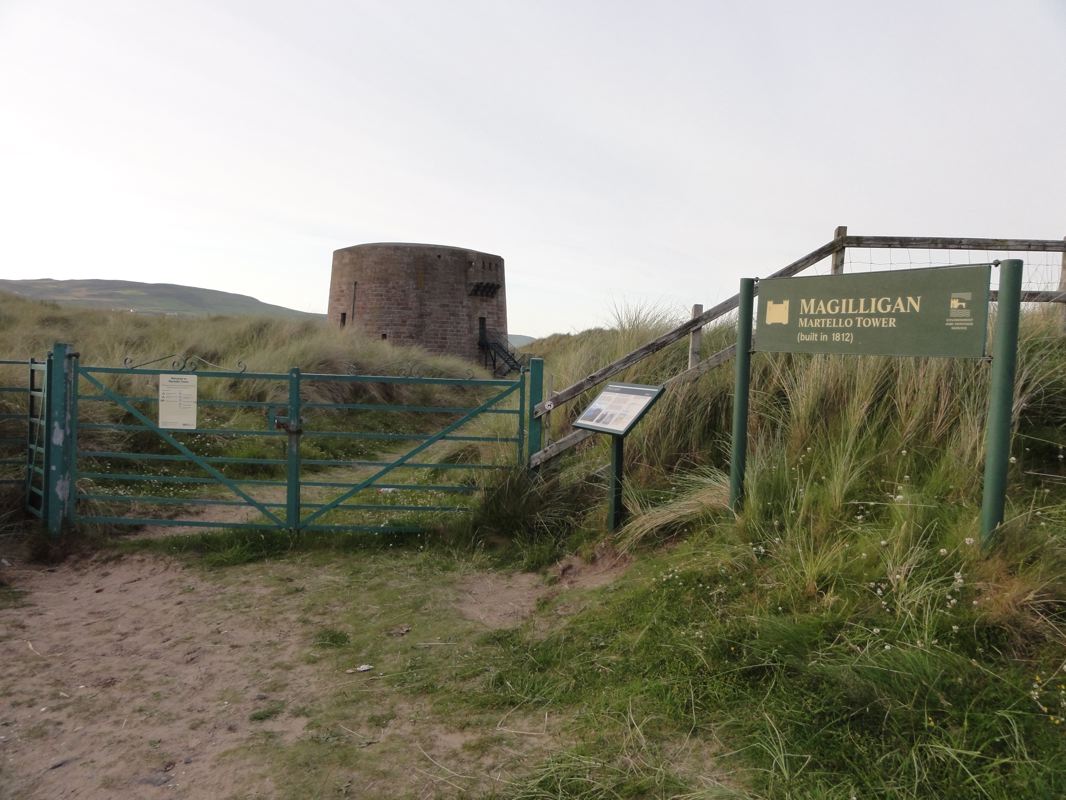 Magilligan Martello Tower, leading to Magilligan Point Where The Campbells sailed out of Ireland in 1807 and 1808 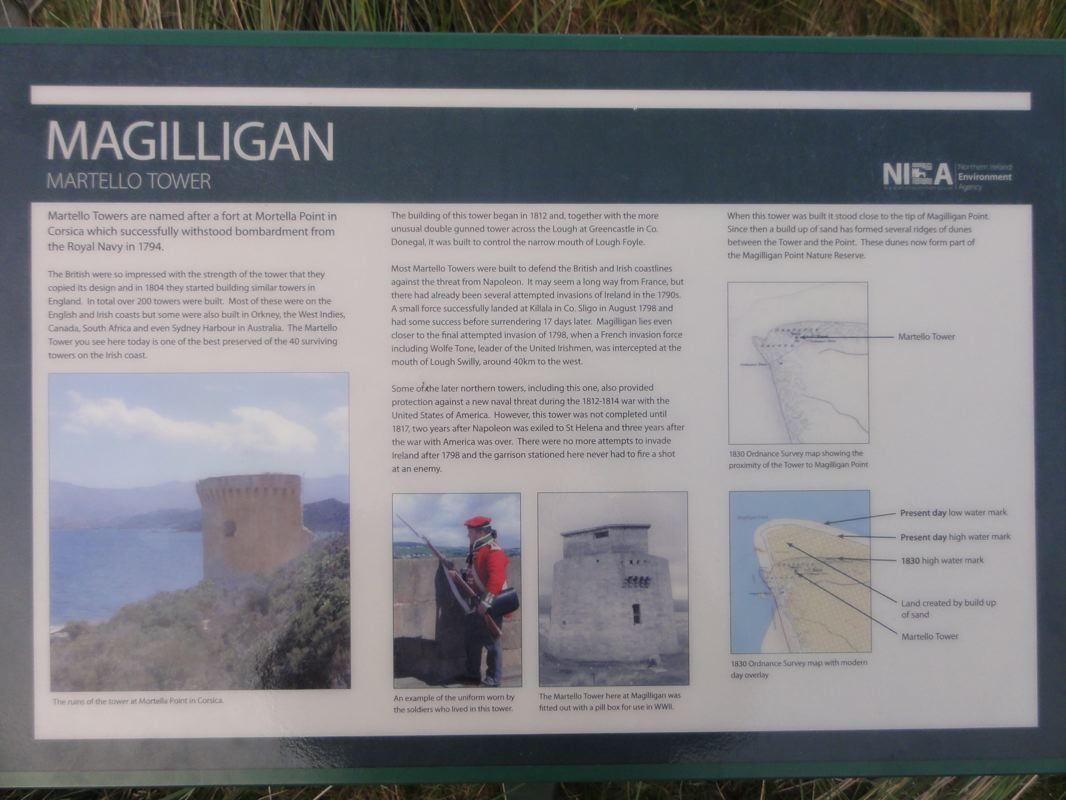 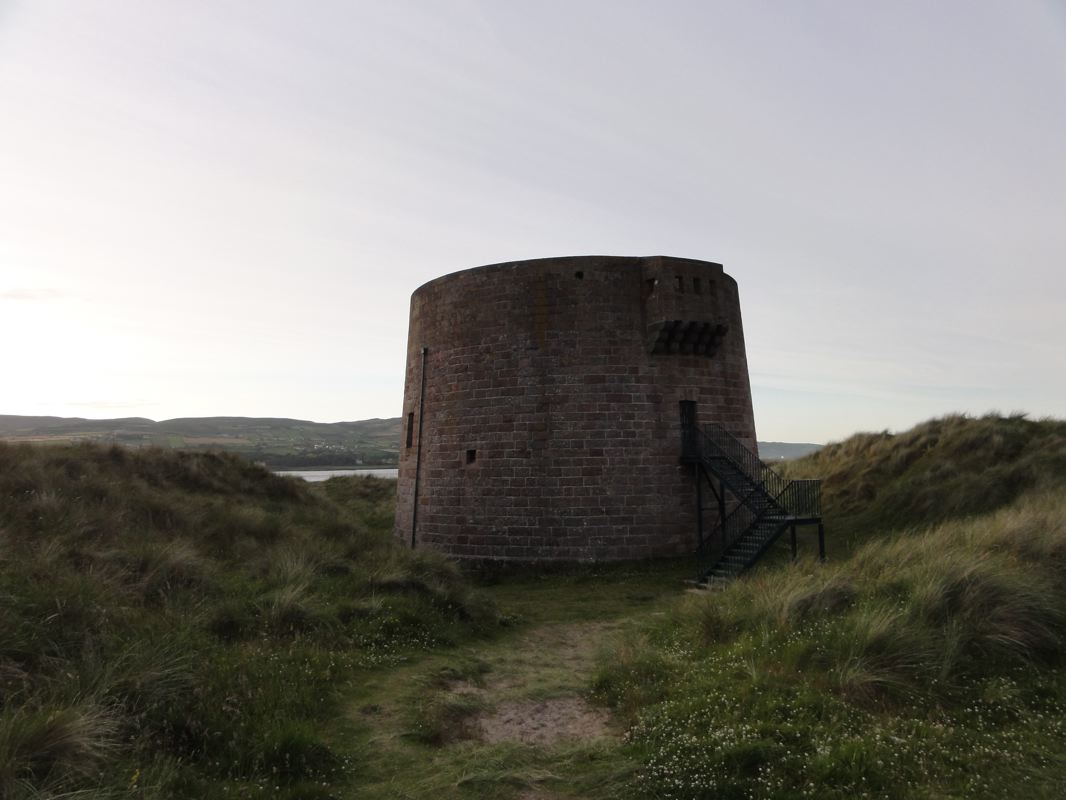 Magilligan Martello Tower, At Magilligan Point, was built four years after the Campbells left Ireland in 1808 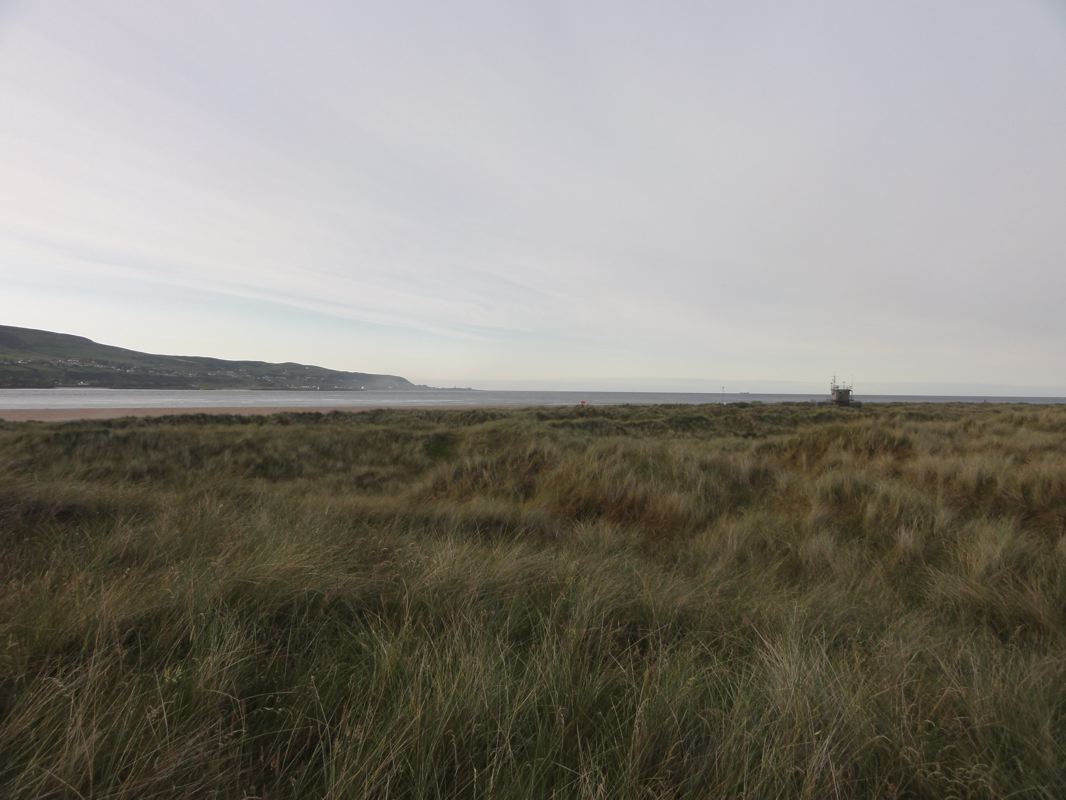 Magilligan Point, Where River Foyle Enters The Irish Sea
Thomas, and later the rest of his family sailed out of this channel to go to America in 1807 & 1808