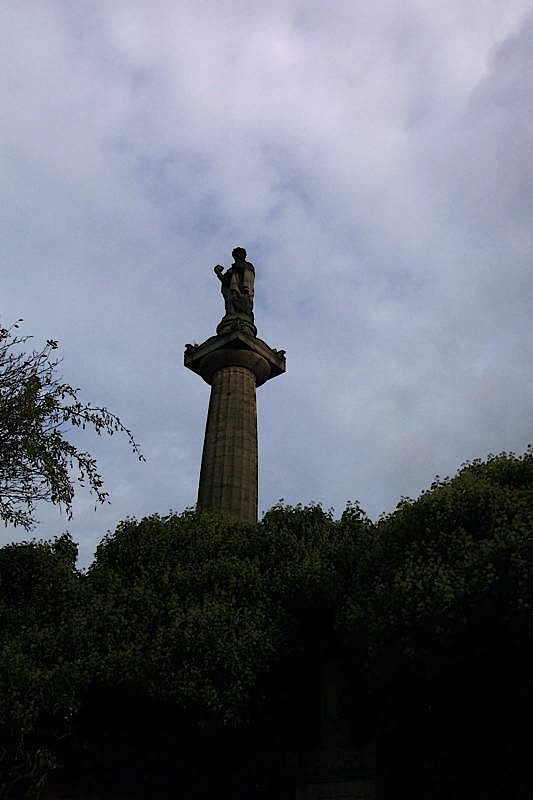 Alexander Campbell was a student at the University of Glasgow in the fall of 1808 and spring of 1809. While there he often wonder across from the university into the old Glasgow Necropolis where many of Glasgow's dead were lain. The twenty year old often contemplated much about life, and what was ahead of him when he, his mother and siblings finally went to America. He visited the old cemetery again in November, 1847 on a visit back to his home. The day following his visit, he was arrested having falsely been accused of being a proponent of slavery.

In the large old cemetery, at the pinnacle of the hill, and behind the old cathedral, is the monument to John Knox and the reformation. Each side of the monument expresses the long fight for religious freedom in the country of Scotland citing the sacrifices of men like Patrick Hamilton, George Wishart, and of John Knox. If you every visit the old city, a visit to the Glasgow Necropolis is a must. In so doing, you will walk where many great men in Scottish history trod, and now in which they rest.

Something very odd about Scotland's resolve to remember their fallen Mr. Knox. When he died in 1547, he was buried behind the church in Edinburgh where he preached. Today that grave location is marked by a brass plate in what is now a city carpark, behind the church.

Location of the Glasgow Necropolis

The Glasgow Necropolis is located in the old part of the city of Glasgow, just behind the Glasgow Cathedral. While there be sure to visit the cathedral, where the great Scottish reformer, Robert Haldane is buried. 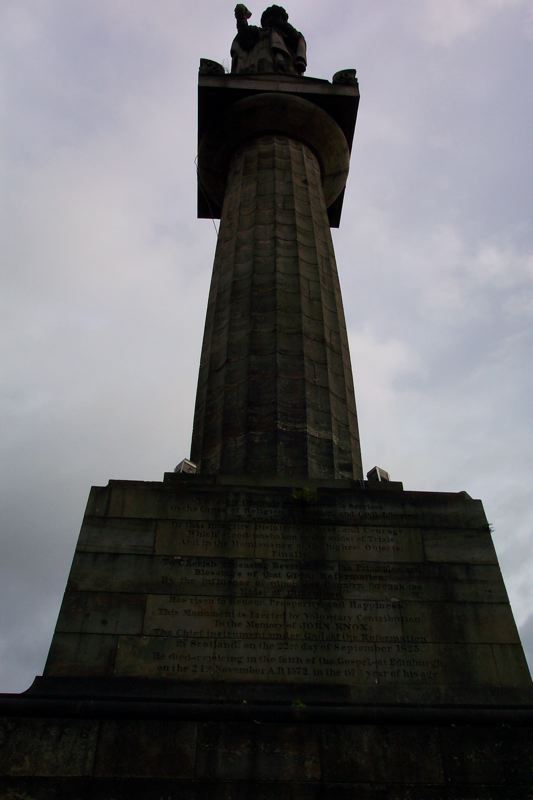 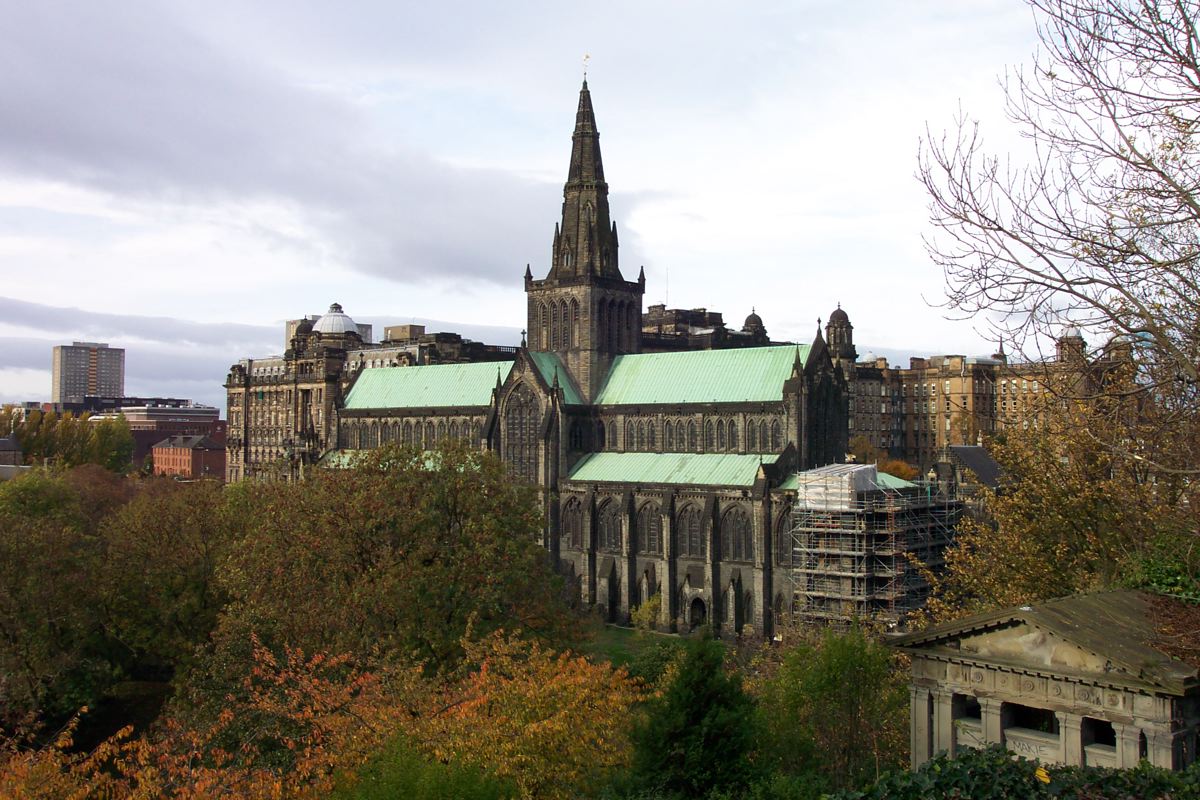 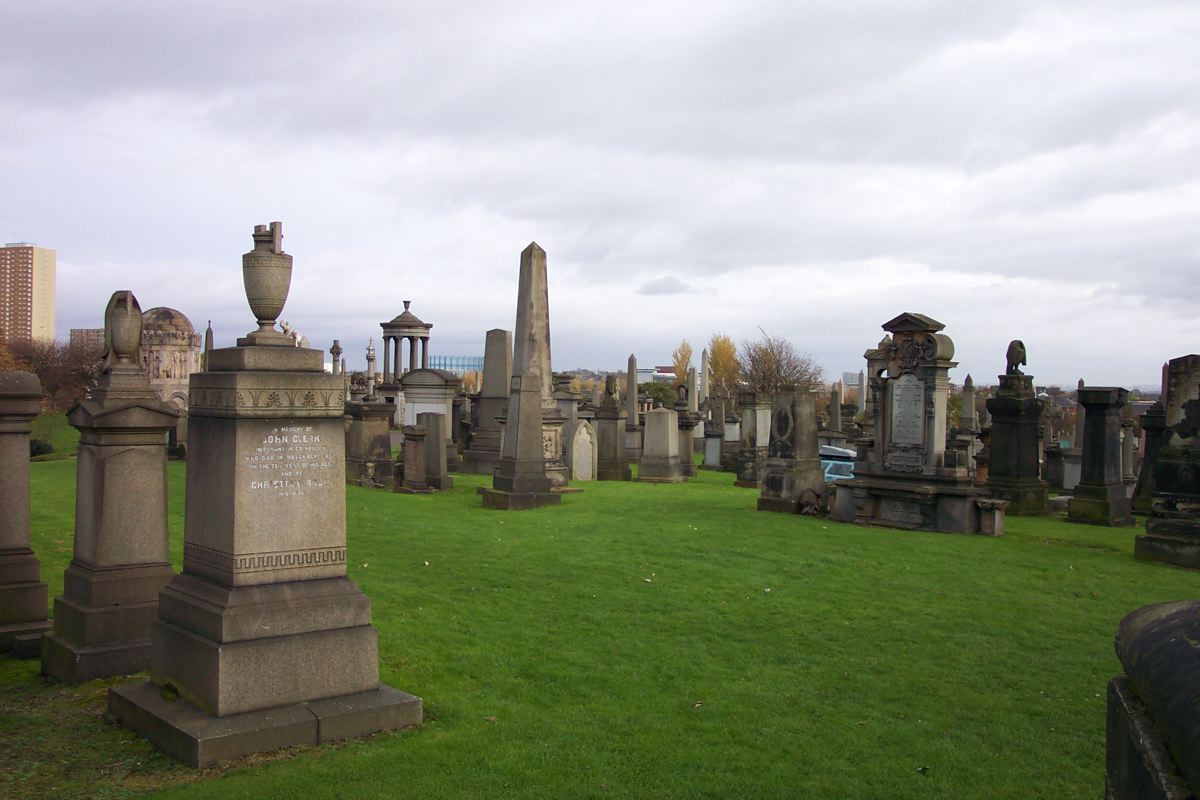 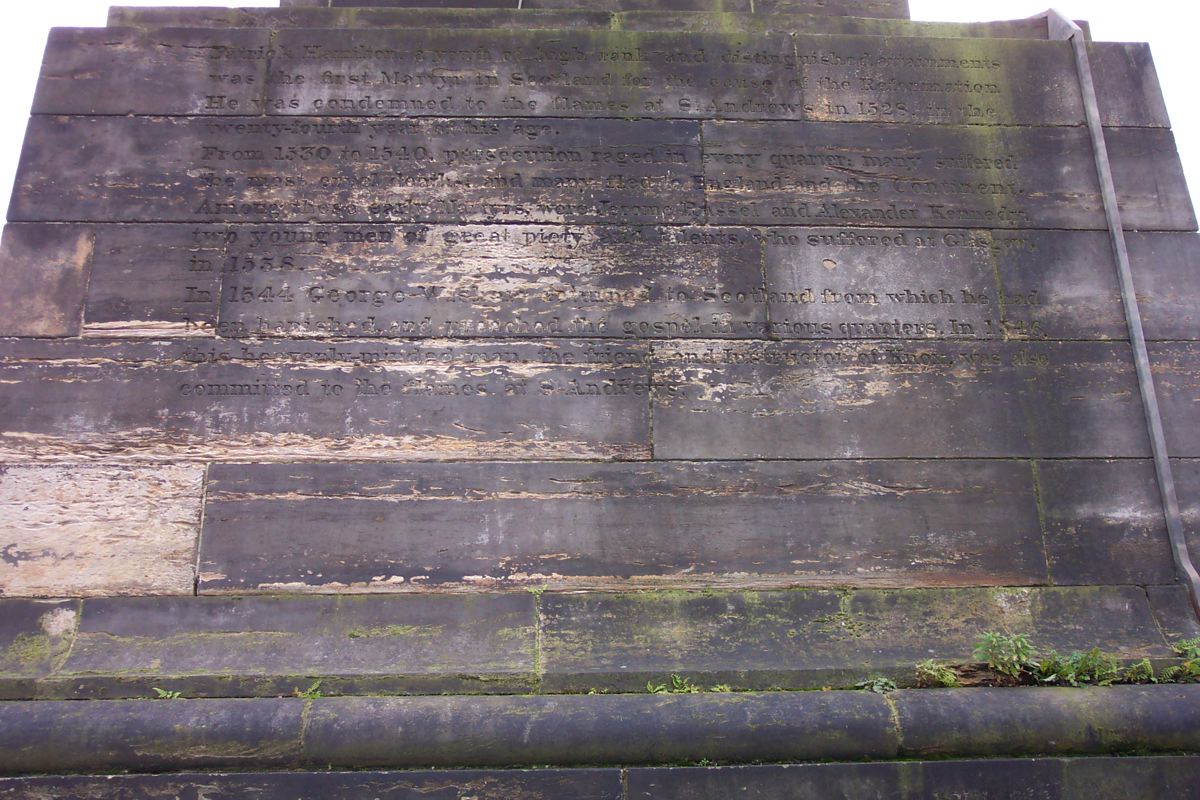 Patrick Hamilton, a youth of high rank and distinguished attainments
was the first Martyr in Scotland for the cause of the Reformation.
He was condemned to the flames at St. Andrews in 1528, in the
twenty-fourth year of his age.
From 1530 to 1540, persecution raged in every quarter: many suffered
the most cruel deaths, and many fled to England and the Continent.
Among these early Martyrs, were Jerome Russel and Alexander Kennedy,
two young men of great piety and talents, who suffered at Glasgow
in 1538.
In 1544 George Wishart returned to Scotland from which he had
been banished, and preached the gospel in various quarters. In 1546,
this heavenly minded man, the friend and Instructor of Knox, was also
committed to the flames at St. Andrews. 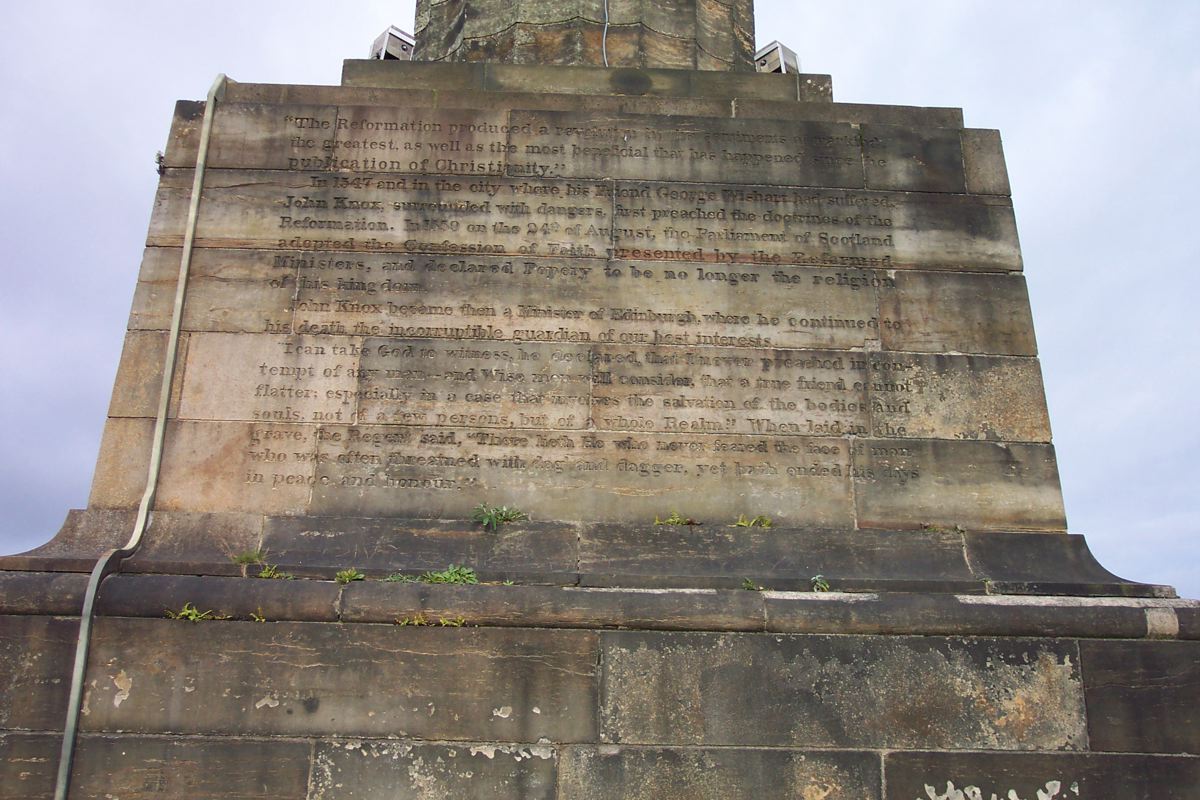 The Reformation produced a revolution in the sentiments of mankind,
the greatest as well as the most beneficial that has happened since the
publication of Christianity.
In 1547, and in the city where his friend George Wishart had suffered, \
John Knox, surrounded with dangers, first preached the doctrines of the
Reformation. In 1557, on the 24th of August, the Parliament of Scotland
adopted the Confession of Faith presented by the Reformed
Ministers, and declared Popery to be no longer the religion
of this kingdom.
John Knox became then a minister of Edinburgh, where he continued to
his death, the incorruptible guardian of our best interests.
'I can take God to witness, 'he declared,' that I never preached in
contempt of any man; and wise men will consider that a true friend cannot
flatter, especially in a case that involves the salvation of the bodies and
souls, not of a few persons but of a whole realm.' When laid in the
grave the Regent said, 'There lieth he who never feared the face of man,
who was often threatened with dag and dagger, yet hath ended his days
in peace and honour.' 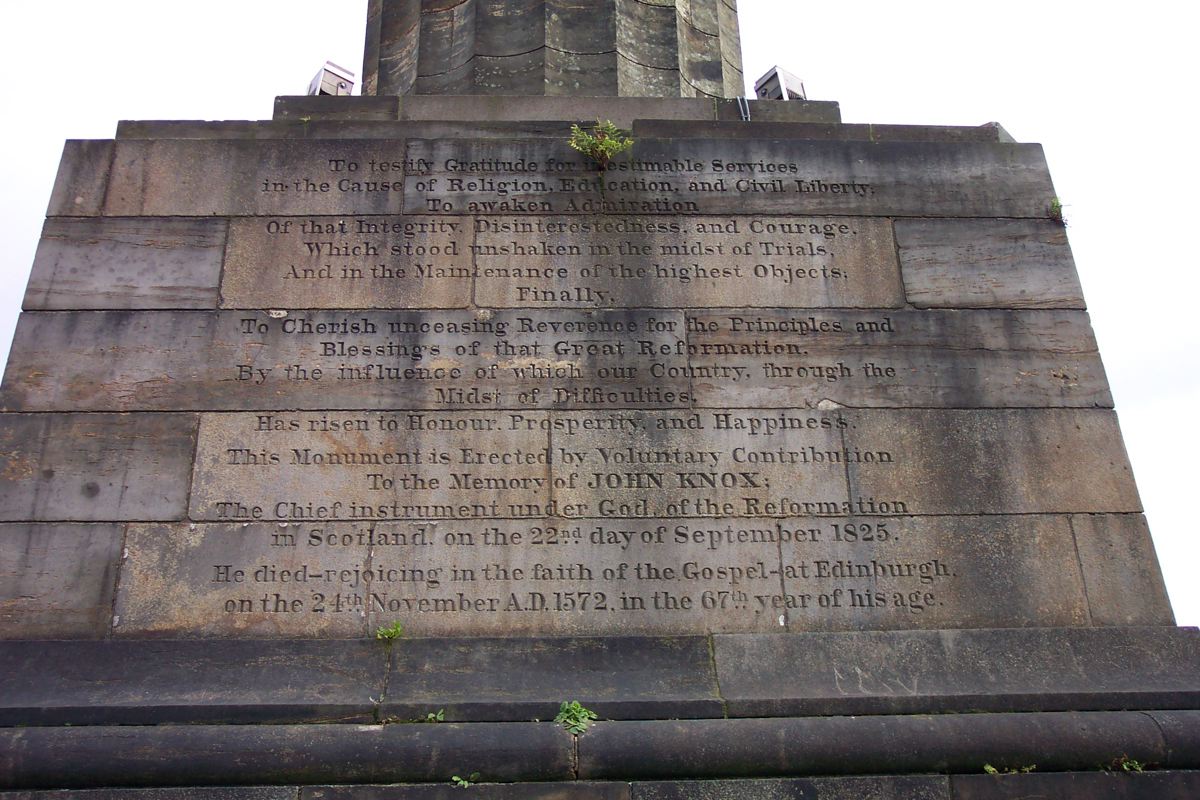 "To testify gratitude for inestimable Services
in the cause of Religion, Education, and Civil Liberty;
To Awaken Admiration
Of that Integrity, Disinterestedness, and Courage,
which stood unshaken in the midst of trials,
and in the maintenance of the highest objects;
Finally,
To cherish unceasing reverence for the Principles and
Blessings of that Great Reformation,
By the influence of which our Country, through the
Midst of Difficulties,
Has arisen to Honour, Prosperity, and Happiness:
This monument is erected, by voluntary contribution,
To the memory of John Knox,
The Chief Instrument, under God, of the Reformation
Of Scotland on the 22nd day of September, 1825.
He died, rejoicing in the faith of the Gospel, at Edinburgh,
on the 24th of November, A.D.1572, in the 67th year of his age. 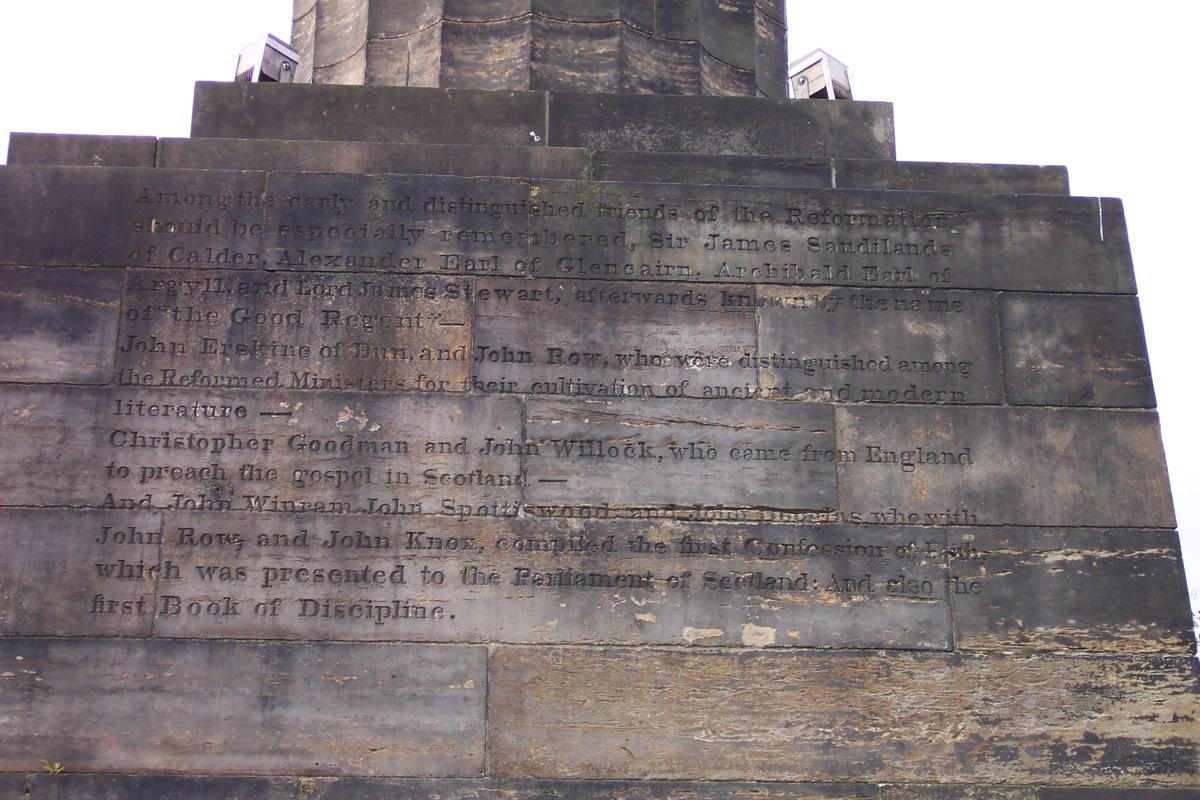 Among the early and distinguished friends of the Reformation
should be especially remembered Sir James Sandilands,
of Calder; Alexander, Earl of Glencairn ; Archibald, Earl of
Argyle; and Lord James Stewart, afterwards known by the name
of 'The Good Regent'-
John Erskine of Dun, and John Row, who were distinguished among
The Reformed Ministers for their cultivation of ancient and modern
literature-
Christopher Goodman and John Willock, who came from England
to preach the gospel in Scotland-
And John Winram, John Spottiswood, and John Douglas, who with
John Row and John Knox, compiled the first Confession of Faith,
which was presented to the Parliament of Scotland; and also the
first Book of Discipline. 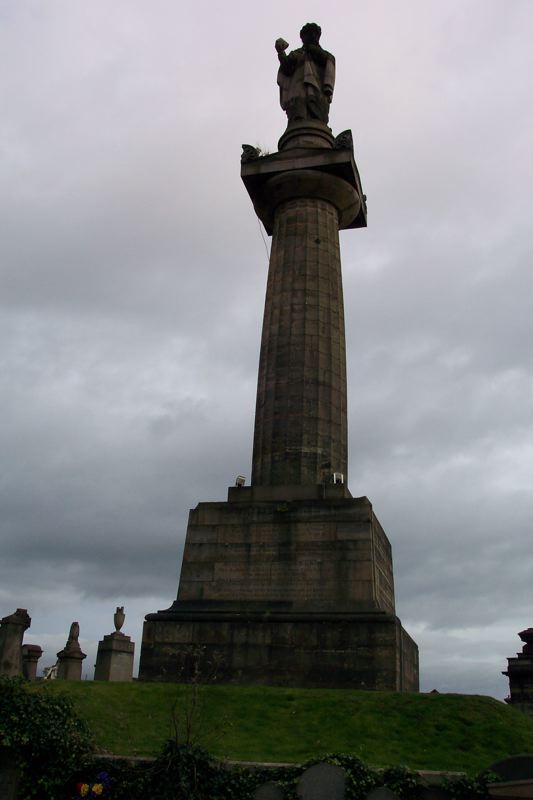 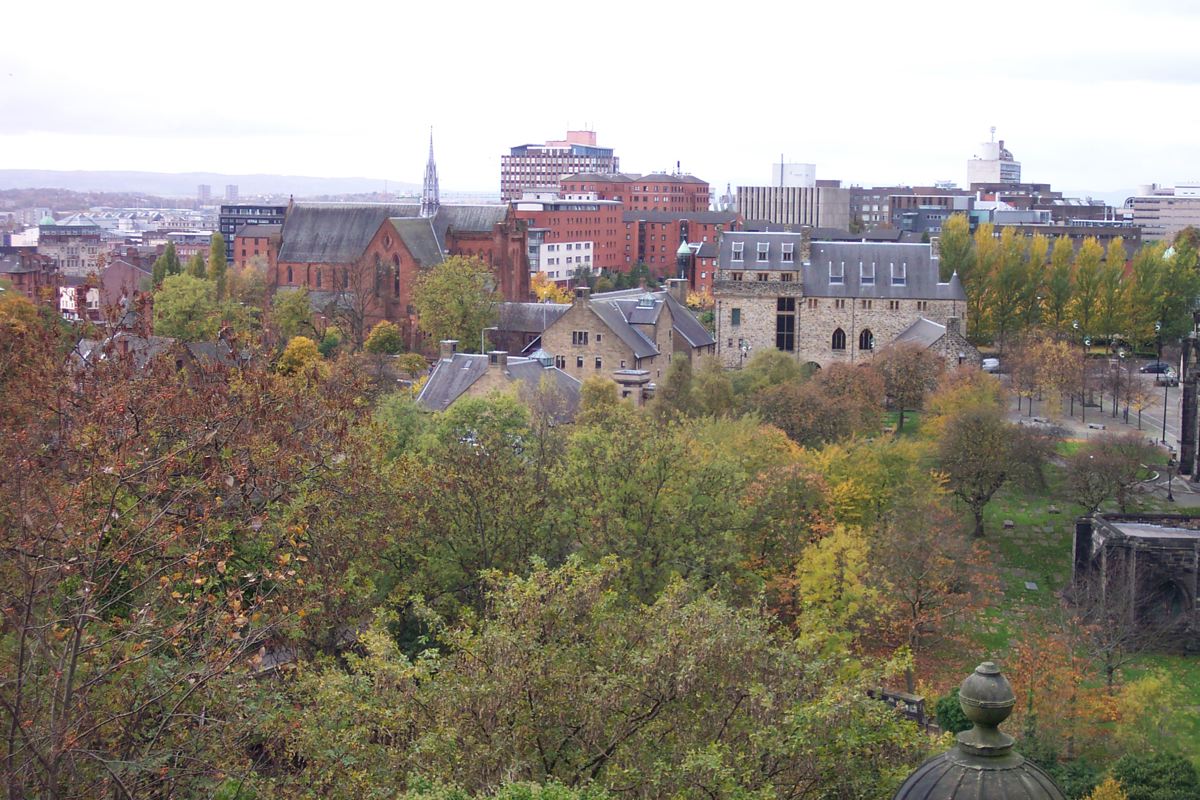 Glasgow From The John Knox Monument In The Necropolis 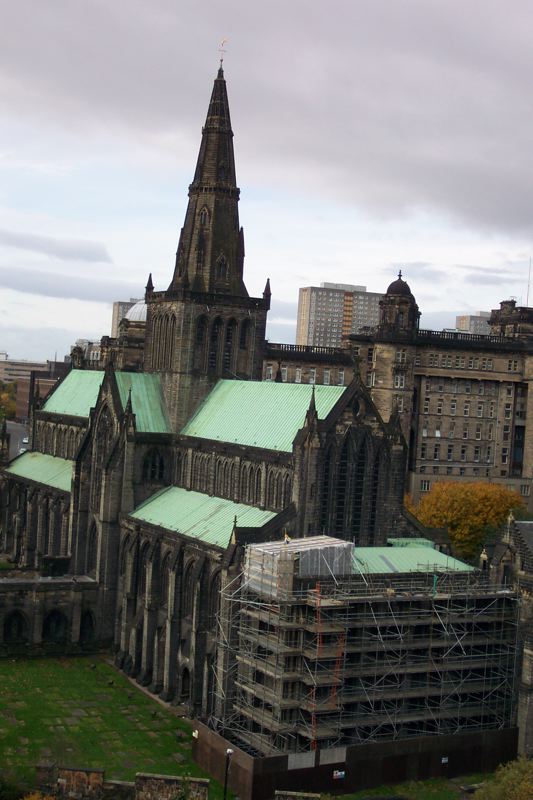 Special Thanks to Graham McDonald, Scottish preacher who ushered your web editor, Scott Harp, and his wife, Jenny, to locations around Scotland in November, 2006. Also to Richard Harp, our son, who is a missionary in Scotland with his wife, Mary and our grandson, Gabriel. They made it possible to take the photos you see on this page.