When we investigate the links and associations of a family, we often learn more about their relatives, friends, and acquaintances. Such is certainly true of the family of John Favor, Sr. in connection with Barton W. Stone, though they were physically separated by hundreds of miles.

John Favor, Sr’s first marriage and early life in Virginia and Kentucky before his move to North Alabama in the very early 1800’ surely brought him and his wife into a circle of friends and acquaintances to which we are not now privy, but we are forced to wonder whether he might have heard some of the early preaching of Barton W. Stone. Born nine years after Favor in Maryland, in 1772, Stone later spent time in North Carolina, Virginia, and Tennessee, before going to Kentucky, where a “revival” was in the making. Knowing the possibilities, Stone stayed in the area near Paris and Cane Ridge, where the rest is history. In the years following, as Stone was speaking out concerning the gospel’s universal scope of salvation and its requirement of faith in the sinner as a condition of his salvation––both principal aspects of his early teaching being in conflict with the creeds and teaching to which he had formerly held and most still held, was it not possible that John Favor, living not far away in the Lexington area, at least heard about this new message. No, he did not accept it this early; but he later accepted the gospel message, stood for it, and and began proclaiming it in his new Alabama home. Might it not be possible that his earliest consideration of this “new message” came during his Kentucky sojourn? Regardless of the reality of such early Stone influence on Favor, other Stone representatives were soon to begin molding Favor’s thinking.

Joshua Kennerly Speer, born and raised in North Carolina, moved to middle Tennessee in 1818, where he began preaching in 1823 and continued all over that section of his state and into North Alabama until his death in 1858. It was inevitable that the influence of Barton W. Stone, working next door in Kentucky, would soon work its way into Speer’s area of the Volunteer State, through gospel preachers’ coming there, so that Speer himself must have been thereby influenced. It was Speer who came from Maury County, Tennessee, to Limestone County, Alabama, in 1833 to preach, as reported in Campbell’s Millenial Harbinger: Jan. 1834 MH, pg. 45 Cannons Creek, Maury county, Ten. December 4, 1833.

"I attended a four days meeting (including the 4th Lord’s day in October last) at Poplar Creek, Limestone county, Alabama; where I had the pleasure of declaring the glad tidings concerning the kingdom of God and the name of Jesus Christ, for two hours on each day, to an attentive audience. Eight persons confessed that Jesus Christ is Lord by submitting to the institution of immersion for the remission of sins. We had, truly, a time of refreshing from the presence of the Lord. The reformation has made a very fair beginning in Limestone county, having amongst its advocates several, of the more intelligent part of the community, a number of whom have shared largely in the honors of this world, but are now willing to seek “the honor which comes from God only.” Joshua K. Speer.

In this visit by Speer and his preaching of the gospel, it is almost certain that the influence of Barton W. Stone continued its impact on both the family of John Favor and others in Limestone County. In October of 1834, John Favor, Jr. reported in Campbell’s paper that two other preachers had just completed their preaching work at the new Limestone County congregation which the Favors had begun after severing all ties with the Baptists: We have been meeting for worship on the first day of the week for more than two years, and can confidently say that the doctrine is of God. At a 3 days’ meeting, held at Mount Pleasant, including last Lord’s day, attended by brethren Anderson and Griffin, 10 confessed the Lord and were added to the congregation. The opposition is raging; but the truth is mighty and will prevail. John Favor, Jun.

According to Stone’s Christian Messenger, James C. Anderson had already been on a preaching tour in Limestone County (confirmed according to the Limestone County Marriage Book in October 1829), had been among Alabama, Tennessee, and Kentucky preachers attending a conference in Jackson County, Alabama, in 1827, and had also served as an agent for Stone’s paper in 1831. The influence of Stone through men whom he had taught and through the paper that he published, surely made its way again into Limestone County. Thacker Griffin traveled with Anderson on a tour through South Alabama for a few months in 1834, before their arrival at Mount Pleasant, the new congregation which the Favors and their former Baptist associates had begun, in October of that year. Who could doubt Stone’s sway in the preaching of these two men?

The incorporation statement of the Poplar Creek Baptist Church of Christ (here also in the 1870’s was the heresy trial of R.W. Officer, a wonderful story of dedication to the Biblical pattern over the creeds of men), declaring the intent of forming a church on July 12, 1827, and recorded by the Clerk of the County Court on August 10 following, contains quite interesting information about some connections of the Favor family. Among those separating from the Round Island Church and forming the Poplar Creek Church in 1822 were the Favors and the Biards (sometimes spelled Baird). Biards in this group were Archibald Biard, Pleasant Biard, and Rebecca Biard. Just a few years later in September 1826, Biards and Favors again separated from Poplar Creek to begin the Independent Baptist Church of Christ at Poplar Creek. Elder John Favor, Jr. was recognized as their pastor, Pleasant Biard as one of the two deacons, John Favor, Sr. as their clerk, and John Nelson Biard as one of two trustees. This combination of names begins to take on new appeal when we understand that the Biard family was related to Barton W. Stone through John N. Biard, whose wife was Rebecca Stone Biard, a niece of Barton W. Stone *(She was daughter of Barton’s older brother Ezekiel), The Biards had moved to Limestone County to live in the Ripley community in 1818, the year when Limestone became a county in Alabama Territory (Statehood arrived in 1819). After John Nelson Biard was killed on January 6, 1839, in the first work done on the Tennessee River by the U.S. Government at Muscle Shoals, and then buried in the Ripley Cemetery in Southwest Limestone County, in 1847 Rebecca moved her children to the area of Paris, Texas, where she was buried. Lamar County. Texas still has its Biardtown community.

This Stone-Biard connection is significant for two reasons: (1) All of the early Biard family members were baptized by either Barton W. Stone or Alexander Campbell, according to Biard family information in the writer’s possession, thus necessitating the kind of influence which this article affirms; (2) The same information states that Barton W. Stone was an accomplished linguist who came to the section now known as Limestone County, Alabama, even before its becoming an Alabama county, and preached to a group of Cherokee Indians in what was then part of the Cherokee Nation. The Biard family’s information also says that there was an eight-sided log church building in the settlement on the Tennessee River in Southwest Limestone County, where Stone preached to the Cherokees. It is thought that his visit took place in the 1820’s. While Stone’s writings apparently do not mention this visit to Limestone County (nor do Campbell’s writings record the visit here claimed by Biard family information), the details in the family history are sufficiently specific and credible in view of other known history as to beg acceptance as really occurring.

Most students of North Alabama Restoration History usually contend that Barton W. Stone’s influence was more profoundly felt in North Alabama than that of Alexander Campbell. In view of this writer’s study of early church history in Limestone County, Alabama, he would also make that contention concerning this one county. Stone’s influence reached Limestone County early through more representatives that did that of Campbell. Early Christians in Limestone County, though sometimes called Campbellites in derision, would more properly have been termed “Stoneites” by those wishing to ridicule them. 9

-Made Available by C. Wayne Kilpatrick

John Nelson Biard was named Nelson for his mother's family. She was said to be related to Thomas Nelson, the Signer of the Declaration of Independence. He was born in Buckingham Co., Va., but went with his parents to Halifax Co., and later to Blount Co., Tenn. There he married and lived until he had three children, then moved to Bledsoe Co. In 1818 he moved with his wife and five children to Limestone Co., Ala., where he reared his family and where they all married.

In 1839, when the first Government work was done at Muscle Shoals on the Tennessee River in Alabama, and near his home, he went there to work and was killed. His body was carried home and buried on his farm. Years later, his sons in Texas bought a monument, had it shipped there and put up over his grave. It is still there, on the Black or Ripley farm near Ripley school. (1950).

After the death of her husband in 1839 Rebecca Stone Biard came to Texas with her children. She died of pneumonia 2-18-1848, at the home of her daughter Minerva Jane Stephenson in Biardstown, and was huried at Antioch Cemetery, being the first body interred there.

Directions To The Grave of John N. Biard

J.N. Biard is buried in the Ripley Cemetery in Limestone County, Alabama. Located on County Rd. 34 it lies about one mile NE of the Tennessee River. From Athens, Alabama head west on Hwy. 72 toward Florence. Head about five miles and turn left on Shaw Road. You will pass Ripley Road. DO NOT turn. Stay straight another quarter mile and turn right on Friend Road (CR34). The cemetery will be less than a half mile on the right. The old grave is in the center front of the cemetery. GPS Location of the grave 34°45'20.3"N 87°08'05.9"W / or D.d. 34.755631,-87.134958 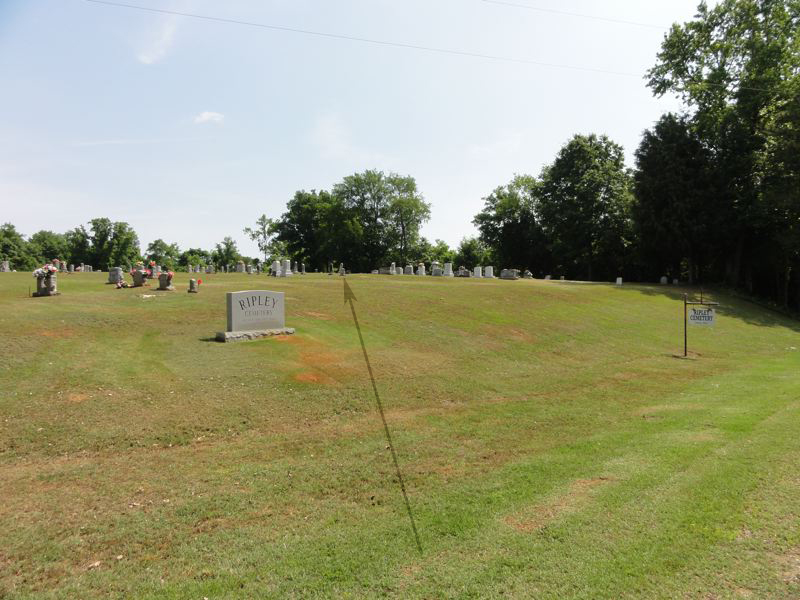 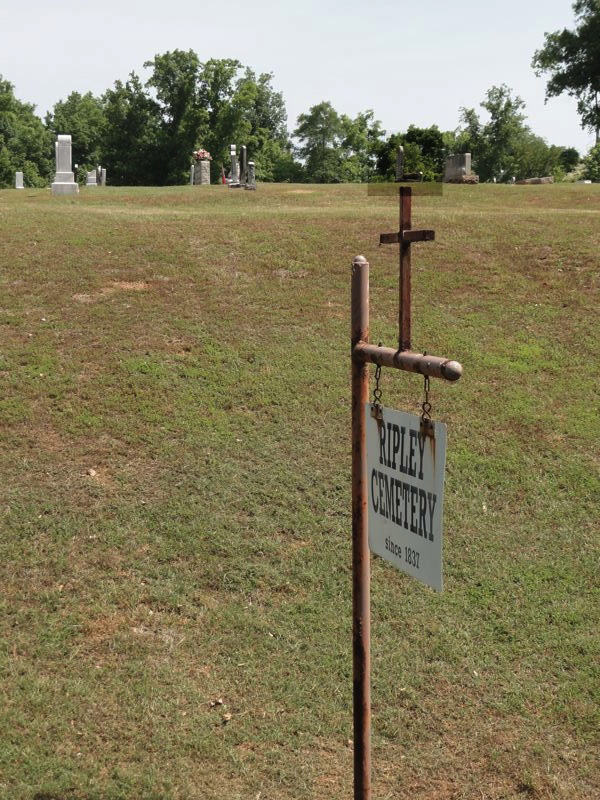 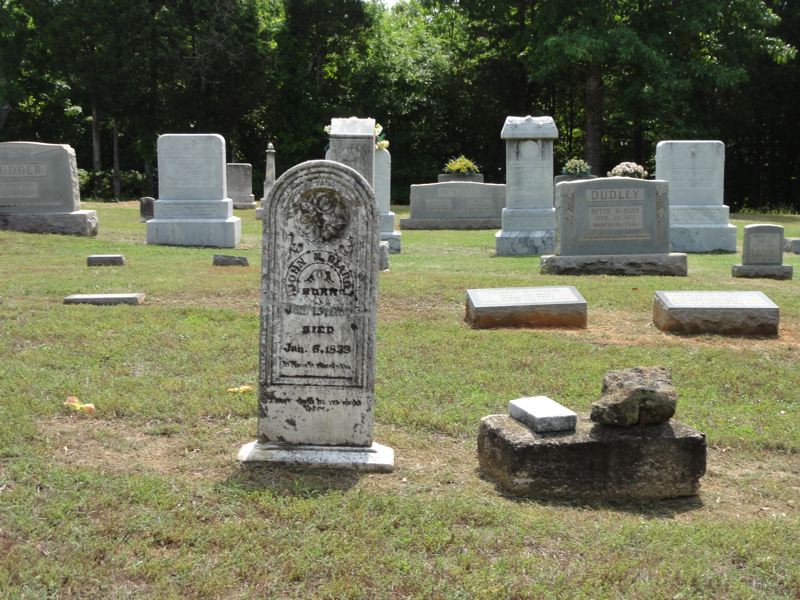 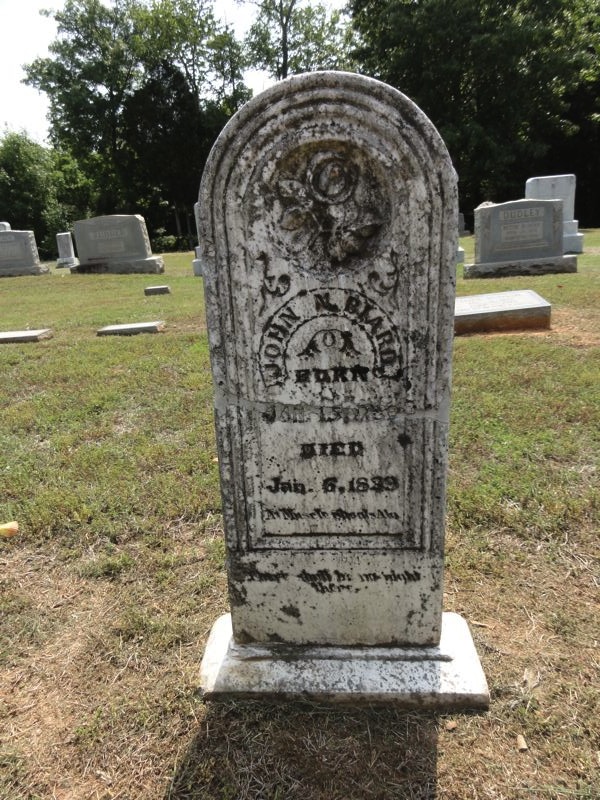 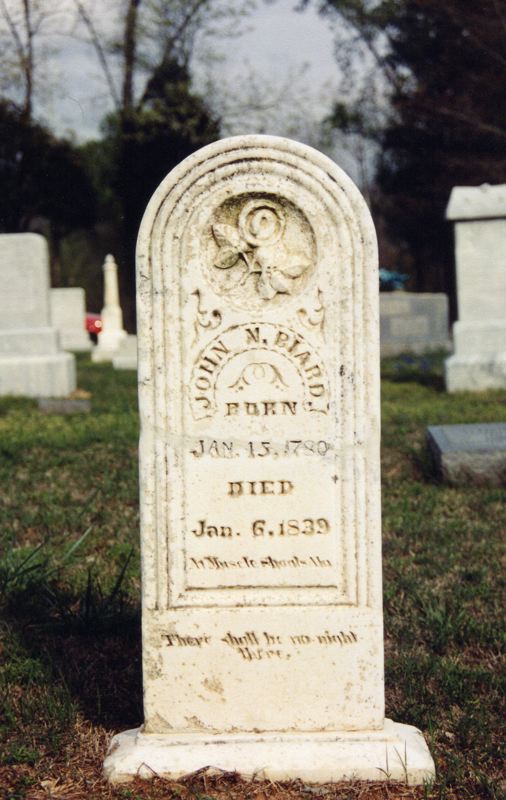 In May, 2010, C. Wayne Kilpatrick, Tom L. Childers, and Scott Harp, did a trip through Limestone County, Alabama to located graves of gospel preachers of yesteryear. We visited the grave on this site thanks to Wayne's research. Special thanks to these fellows for the photos as well as Wayne's provision of information. Also thanks to Bobby Graham for the fine piece presented in Alabama Restoration Journal.