Biographical Sketch On The Life Of C.E. Fulmer

Clyde Edward Fulmer was born January 15, 1912, at New Matamoras, Ohio. He was the son of Henry A. and Myrtle (Edwards) Fulmer. He attended Marietta High School in Marietta, Ohio. To further his education, he attended David Lipscomb College and Harding College. At David Lipscomb College, he served as editor of the school paper, The Babbler.

Fulmer was baptized by Oliver Johnson in March, 1927, and began preaching in 1929 in Marietta, Ohio, at the age of seventeen. He preached his first gospel meeting at Rich Fork, Monroe County, Ohio, at age eighteen. In 1933 he preached at Clarington, Ohio. Places where he did full time local work were Nacogdoches, Texas; Kirbyville, Texas; Mt. Enterprise, Texas; E. Tallahassee, Alabama, 1936; and Capital Heights in Montgomery, Alabama (he preached in Montgomery, Alabama, for 40 years). States in which he held meetings were Ohio, Mississippi, Alabama, Florida, Texas, Georgia, West Virginia, Louisiana, and Arkansas. In his lifetime he was instrumental in helping to start many congregations.

Fulmer worked at the General Delivery window at the U.S. Post Office for 40 years. He received several awards from the Postal Service for helpful suggestions.

In addition to the places where he did full time local work in the States, he also did mission work in Aylesbury, England.

Though Fulmer held a full-time position with the U.S. Post Office Department, no gospel preacher in Montgomery visited more sick people in their homes and in the hospitals, or conducted more funerals or performed more weddings or held more gospel meetings within a 75 mile radius of Montgomery than did he.

In all of the 50-year ministry, there was never a question raised against his moral character, or against his sincerity of purpose, or against the doctrine which he proclaimed.

One of his greatest contributions to the cause of Christ was his work as a radio evangelist. For twelve years, he conducted a 30-minute Sunday morning program called "Words Of Life" over WBAM, a powerful 50,000 watt station. Every sermon that he delivered over that station was carefully prepared, and the visible results testified to the effective teaching that he did. Only eternity can reveal the total results.

He also conducted, for a five-year period, a 5-minute devotional program over station WCOV, entitled "Into My Heart." He also had radio programs on WAYS in Charlotte, N.C. and WFMC, Monroeville, Alabama. 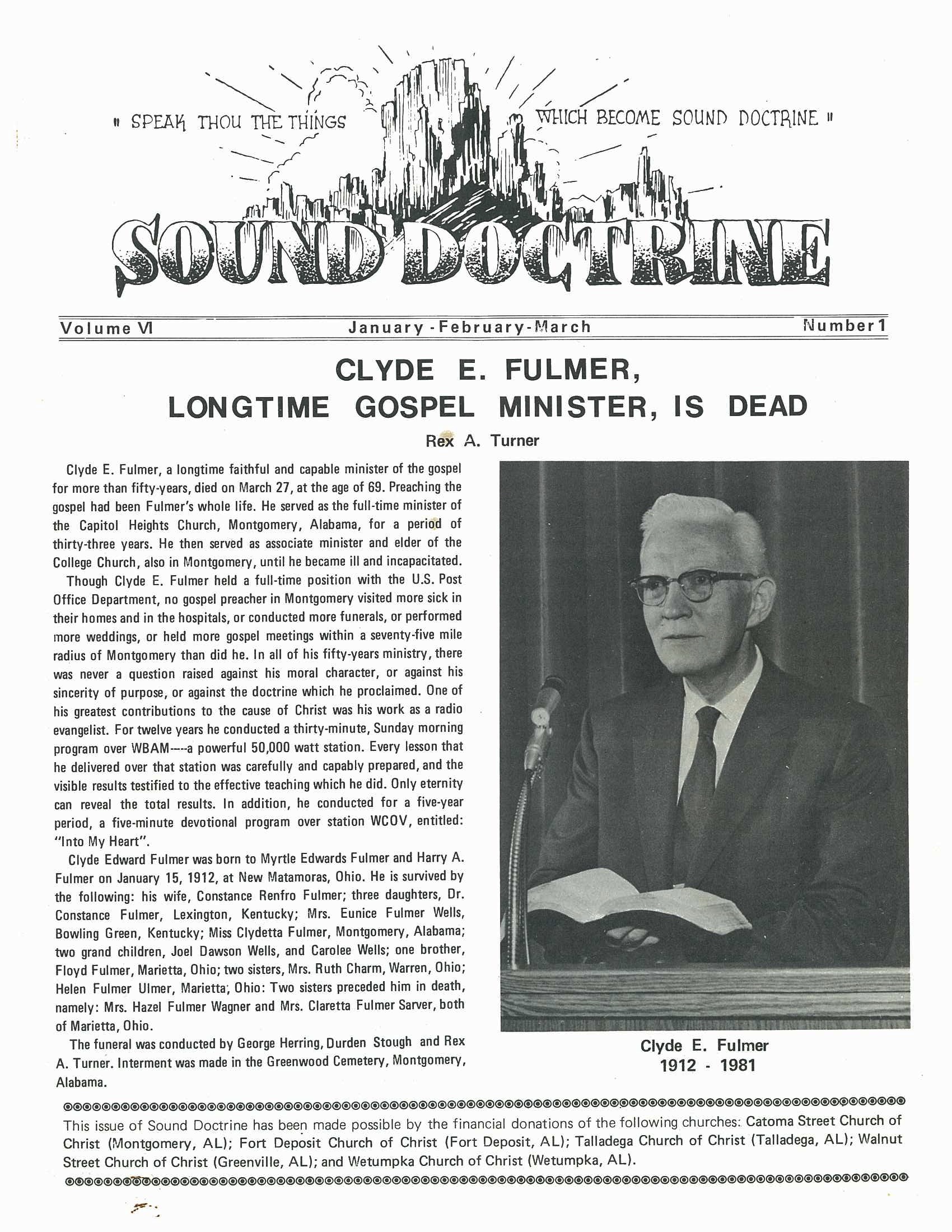 Directions To The Grave Of Clyde E. Fulmer

Clyde Edward Fulmer is buried in the beautiful Greenwood Cemetery in Montgomery, Alabama. Just east of central Montgomery, take I-85 to Exit 3, Ann St. Exit, and go north. Go five streets to Highland and turn right. Go to the stop sign and you will be facing the entrance to Greenwood Cemetery. Enter the cemetery and go to the top of the hill. As you go up the hill you will bear to your left at the second turn. Continue up the hill bearing to your left until you dead end into Section One. Turn right and note that Section 4 is on your right. Bro. Fulmer's grave is located in the center of Section 4 in the Renfro/Fulmer Section. His father-in-law Guy I. Renfro, was a gospel preacher. He is buried in the same plot as the Fulmers. Other preachers of note buried at Greenwood are J.M. Barnes, and Rex A. Turner, Sr.