Biographical Sketch On The Life Of G.M. Haley

Green Haley was born March 13, 1820, and thought to be from Kentucky. He moved into the Northwest part of Alabama in the early 1840s and purchased about 1000 acres of land on the Buttahatchee Creek for 10 cents per acre. Various accounts explain different ways in which Haley became a Christian, Some say that early in life he came under the influence of Barton W. Stone and Alexander Campbell, and that when he came to Alabama, he brought his faith with him. Later evidence has shown that he came under the influence of John Taylor after arriving in the area, and the Taylor was already preaching in the area when the gospel was introduced to him, and he obeyed it. A congregation was establishing on on a tract of land on his property. The little church became known as the Whitehouse Church of Christ. It was called the Whitehouse because it was a wood building that was painted white, and large enough that it was a focal point in the community. It was in the community as the Whitehouse church. Haley was a horse man by trade, buying and selling. This provided the income he needed to pursue his greater interest, the souls of the lost in North Alabama.

During the Civil War, the area of Marion and Winston Counties held strong support for the Union. Many thought that the confrontation between north and south was a rich man's war. People from this area were generally poor, having no slaves to work their small farms. Haley did own slaves until the Emancipation Proclamation by President Lincoln. Though earlier in life, he was an avid supporter of slavery, his conscience had been admonishing him to changes his way of thinking. The Emancipation proclamation facilitated him the opportunity to clear his conscience by freeing his slaves.

It was commonly known in the community that Haley's sympathy laid with the union. He was only forty years old when the war began, but he never donned the blue or the gray uniform. Books, such as, Southerners In Blue, by Don Umphrey and Tories Of The Hills, by Wesley S. Thompson, histories of the area, recount the colorful involvement of Green Haley fighting against the rebellion of the south. He found volunteers to join the union forces. Because of his successful business, he then provided sustenance to wives and children of volunteers who were left behind. He was nearly put to death for "treason" on different occasions during the conflict, but the Confederacy.

After the Civil War, he continued to preach and work with the little church at the Whitehouse as long as his health would allow. He passed from this life in November, 1882 at his home, and is now buried in small family section at the southern end of the Community Cemetery at the Whitehouse.

The Conversion Of Green Haley

Green M. Haley was an old man nearing the end of his life when F. B. Srygley first met him on a preaching journey with “old Brother John Taylor” in 1880. Srygley and Taylor traveled through Franklin, Marion, and Fayette Counties in Northwest Alabama preaching in places where Taylor had labored in the gospel for many years. Chester Estes, a native of Marion County, in a letter to Srygley in 1930, mentioned Green Haley in reference to the old White House church of Christ. The White House church is located ten miles southwest of Haleyville, Alabama, a city named, it is said, for one of Haley’s sons. Estes said the White House church, the oldest in the county and one of the oldest in the state, had been started through Taylor’s efforts. Srygley replied: “I remember well the meetinghouse near Buttahatchee River. Brother Taylor and I held a week’s meeting in the White House on that same trip of which I spoke in my first article about John Taylor. Brother Green Haley was living then, but he was in feeble health and was able to attend the meeting only a time or two.” (Gospel Advocate, May 29, 1930.)

Haley was born March 13, 1820, in Kentucky it is believed. He came to Marion County in the 1840s and bought a large tract of land, about 1,000 acres, on Buttahatchee River near the site of the White House church and at the place later known as Haley’s. There are conflicting accounts of Haley’s conversion to New Testament Christianity. One says he was a Christian when he came to Alabama, and that he established a congregation on the corner of his property, which is the White House church. Another account is given by J.Waller Henry, which he no doubt heard from his father, Dr. A. C. Henry, who preached in Northwest Alabama in the last two decades of the nineteenth century. The younger Henry said of Haley that he was “converted Green Monroe Haley under (T. W. Caskey) and the Kendricks (Allen and Carroll) “Who were pioneer preachers in that region in earlier times. (Alabama Christian,, March 1906).

However, Srygley gives a different account of Haley’s conversion, which he learned from John Taylor, who was the preacher that converted him. After telling about Haley’s feeble condition about two years before his death, Srygley said “Brother Taylor told me of Brother Green Haley’s opposition to the truth as preached by him”. Taylor began his ministry in Marion County, not far from New River in the 1830’s before Haley came to Marion County. He, Jeremiah Randolph, Matt Hackworth, and others were preaching the gospel plan of salvation in that country before they had ever heard anything about the work of Barton W. Stone or Thomas Campbell and Alexander Campbell.

Srygley writes: “Brother Taylor said that many years before (that journey) he was preaching in that community when Sister Haley, the wife of Green Haley, made the confession, and they set the time for her baptism on the afternoon following her confession. At the meeting next morning, Mrs. Haley told Brother Taylor that Green said he would shoot the preacher that tried to baptize her. He was so prejudiced against what he called ‘Campbellism’ that he felt that he would be justified in killing anyone who would dare undertake to baptize his wife.

Mrs. Haley asked Brother Taylor to go home with her and try to persuade Green to allow her to be baptized. “The old man went, and he said that when he got there he ‘found Green sitting on his back porch with his gun near him, reading his Bible.’ The old man said that Green never came near him, neither did he come to the table to eat his dinner. Mrs. Haley and Brother Taylor sat down to the table and ate their dinner. Soon after dinner the time came for the preacher and the frightened wife to go to the water to attend to the baptizing. 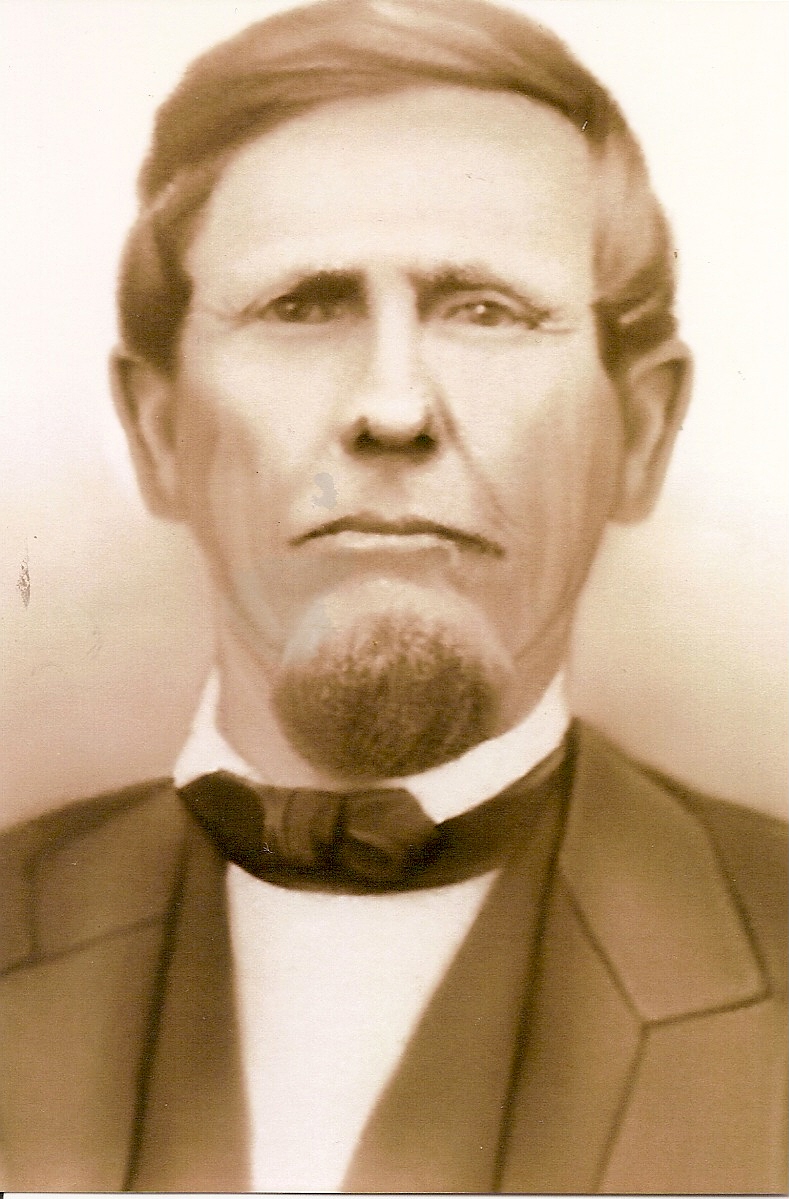 Brother Taylor said he went out where Mr. Haley was still reading his Bible, and said: 'Green, you do not propose to stand between your wife and a command of God, do you?' Green Haley did not answer him, but called his wife and asked her if she believed that the Bible commanded her to be baptized, and she said: ‘I most certainly do, Mr. Haley.’ Then he said: ‘Go on, then, and do it.’” The rest of the story, as Srygley related it from John Taylor’s own account, has a happy ending. “They left the house together, but left the husband still reading his Bible. As I remember it, before the meeting closed he came and demanded baptism upon a confession of his faith. Green Haley afterward became a preacher of the gospel, and Brother Taylor told me that he was one of the most logical men he had ever heard in debate. He was brave as a lion and was always ready to defend the truth with any adversary. I am certainly glad to know that his descendants stand for the faith which was so dear to their father when he learned it from the New Testament.” (Gospel Advocate May 29, 1930)

Green Haley was associated with and was encouraged in his preaching by Caskey and the Kendricks, who were preaching in Alabama near the beginning of his ministry. Henry said that Green Haley “became a great preacher and a powerful influence for good in the Northwestern section (of Alabama) planting many strong congregations” (Alabama Christian, March, 1906). He was a successful businessman, buying and selling horses, which provided his support while he preached the gospel.

The little church at Buttahatchee River near Haley’s home was one of John Taylor’s preaching stations well before and for many years after the Civil War. In an item in the Gospel Advocate, written on the eve of the war, Taylor stated that the congregation at Buttahatchee had a “very efficient preacher in the person of Green Haley.” (Gospel Advocate, September, 1860).

Through their joint efforts thirty persons were added to the church there in 1860. The two preachers became close friends and one of Taylor’s sons was named Haley, evidently after Green Haley. Taylor also named another son after Jeremiah Randolph, another of his early companions.

Scott Harp adds some significant side lights about Green Haley. He writes “During the Civil Was the area of Marion and Winston Counties held strong support for the Union. Many thought that the confrontation between North and South was a rich man’s war. People from the area were generally poor, having no slaves to work their small farms. Haley did own slaves until the Emancipation Proclamation by President Lincoln (September 23, 1862). Though earlier in life, he was an avid supporter of slavery, his conscience had been admonishing him to changes in his way of thinking. ”The Emancipation Proclamation. facilitated him the opportunity to clear his conscience by freeing his slaves.“ It was commonly known in the community that Haley’s sympathy laid with the union. He was only forty years old when the war began, but he never donned the blue or the gray uniform. Books, such as, Southerners In Blue, by Don Umphrey, and Tories Of The Hills, by Wesley S. Thompson, histories of the area in time of histories of the area in time of the war, recount the colorful involvement of Green Haley fighting against the rebellion of the south. He found volunteers to join the union forces. Because of his successful business, he then provided sustenance to wives and children of volunteers who were left behind. He was nearly put to death for ‘treason’ on different occasions during the conflict.” (Scott Harp, Green M. Haley. TheRestorationMovement.com.) Such were the men who pioneered apostolic Christianity in the mountains of Northwest Alabama in the years preceding, during and after the Civil War. The area is to this day a stronghold for the ancient order of things….

Note: Special thanks goes to Larry Whitehead of Fayette County, Alabama for providing pictures of Green and Juliet Haley.

Directions To The Grave Of Green M. Haley

The Whitehouse community is located in Northwest Alabama, in Marion County. The small rural community lies along Hwy 278 about twenty miles east of Hamilton, and about twelve miles west of the city that bears his name, Haleyville, on Highway 129. (Haleyville was actually named after a child of Haley who owned a business in the town now bearing that name). Just west of where Highway 129 crosses Highway 278 take your first left (south) into the Whitehouse Cemetery. (If you were to take the first right you would go into the church parking lot.) Enter the cemetery on the little road and proceed to the rear of the graveyard you see. Go out the back of the cemetery on the little dirt road and go down a hill. Off to the right is a small family cemetery where Haley and some of his descendants are now buried. 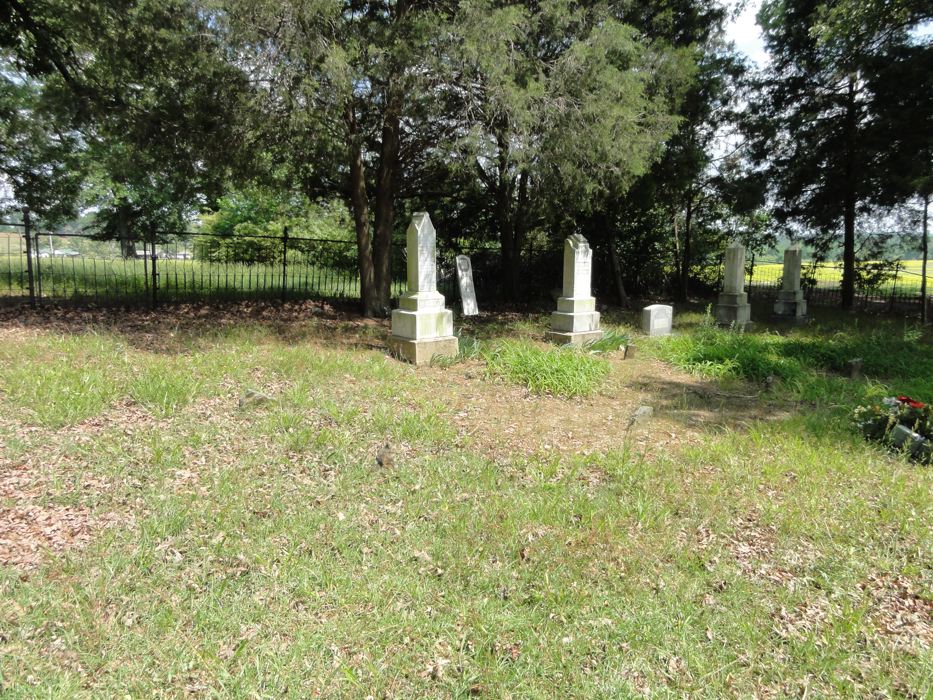 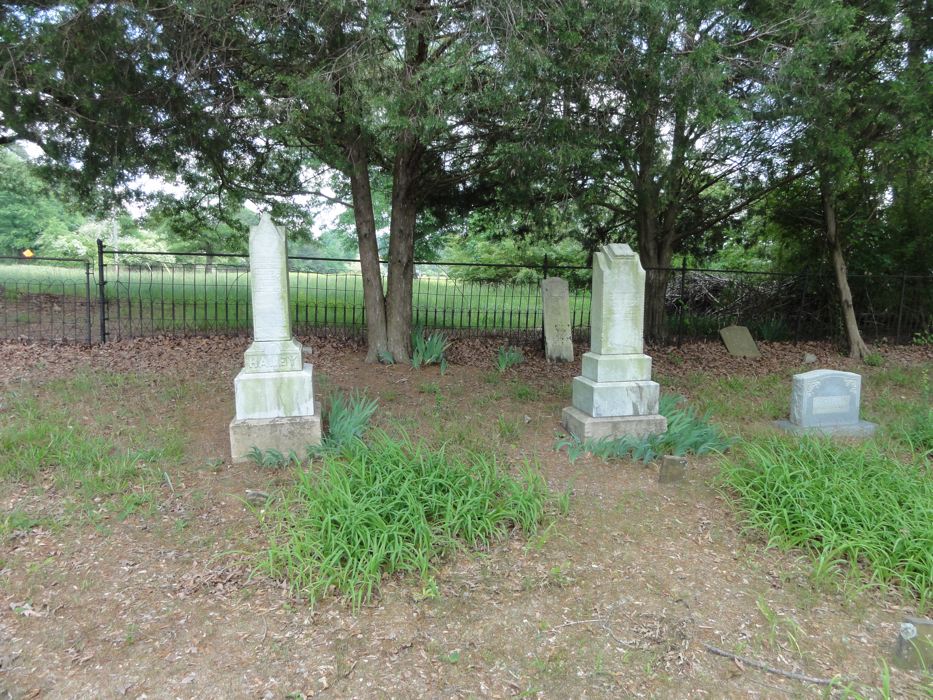 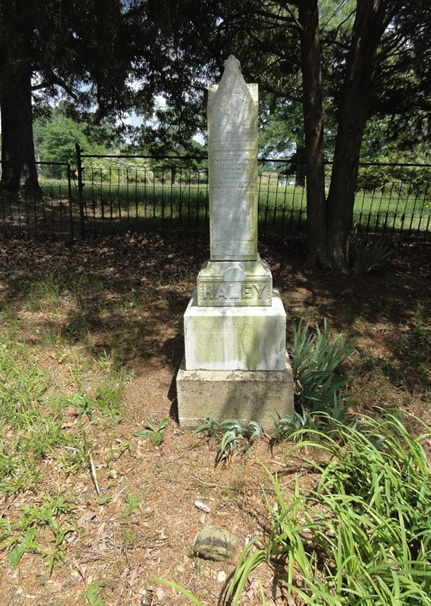 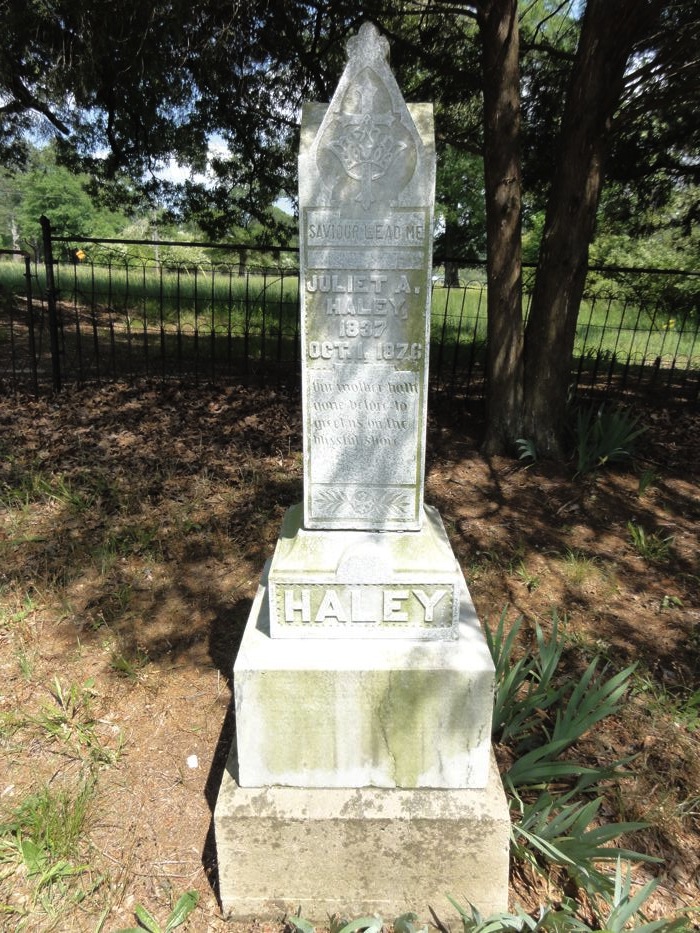 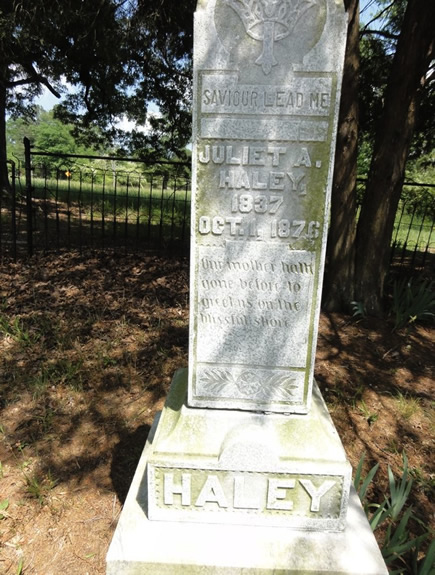 Saviour Lead Me
Juliet A.
Haley
1837
Oct. 1, 1876
Our mother hath
gone before to
greet us on The
blissful shore 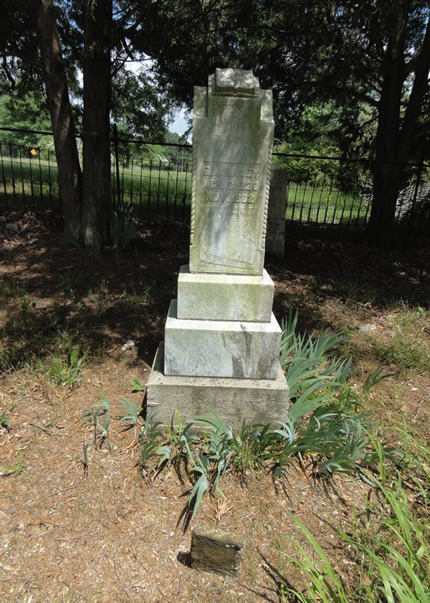 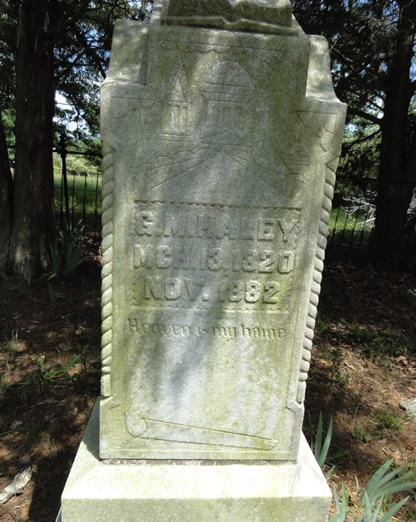 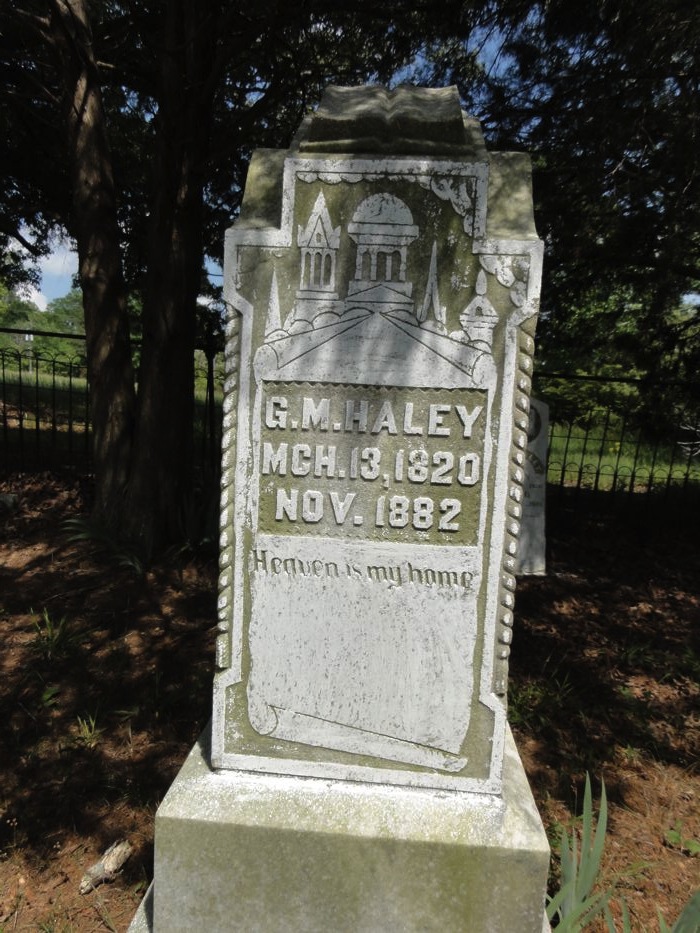 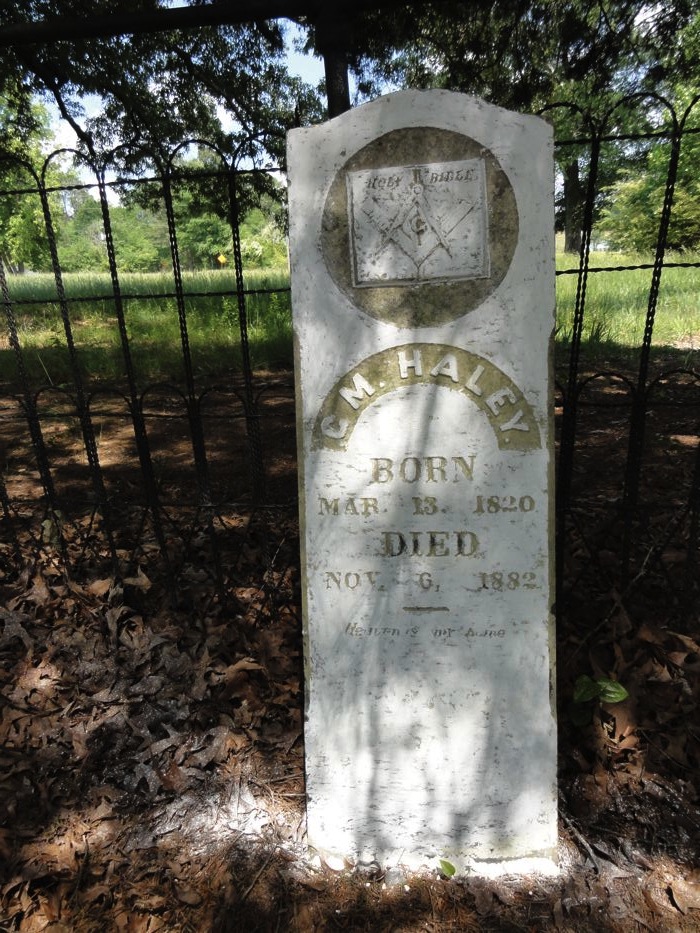 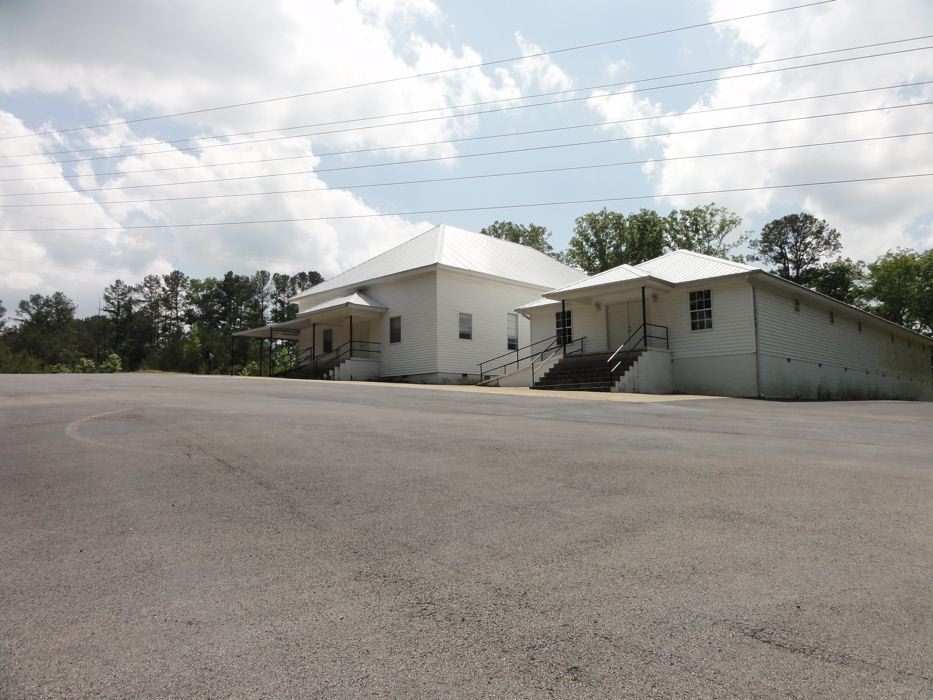