Note: These are timed pieces. Some of those enlisted as living are now deceased.

W. J. Haynes was born near Highland Home, Alabama, in 1858. He was married to Nettie Keener. To this union was born seven children; three boys and four girls, all of them are alive. Sister Haynes truly helped Brother Haines in his great work, her part being that of looking after the home and caring for the children. She was always ready to bear the hardships which every gospel preacher's wife must share. She preceded him to the grave many years. Brother Haynes was later married to Miss Georgia Roberts of Valdosta, Georgia.

Brother Haynes was instructed in the public schools of his section, later attending school at Strata, Ala. There he took high ranking as a student. He was blessed with a brilliant mind and easily mastered a thorough knowledge of the fundamentals of education. Brother Haynes was recognized as one of the leading teachers of this section. His home was at Grady, Ala., where he taught possibly mare than twenty-five years. He taught school in Dozier, Ala. and was Principal of the Jackson Bible School in Valdosta, Ga., for two years. He then returned to Grady and ran a private school known as the Grady Bible School. His last teaching was done at Casey, Ala.

Brother Haynes attracted pupils from many parts of the country who came as boarding pupils. Many of these are successful in their respective lines of work. Though ranking high as an educator his real mission and greatness was as a gospel Preacher. While a student under J. M. Barnes his first effort was made at Old Cross Roads Church in Lowndes County. Brother Barnes introduced the young preacher who read the 4th chapter of Ephesians intending, after prayer to re-read and comment on same, but as he read he could see no need of any comment and closed with the last verse after which he asked Brother Barnes to take charge. Many of the older brethren felt and stated that Brother Mac had made a mistake in selecting this preacher.

Brother Barnes stated Will had preached the best sermon he had ever heard for there was no addition nor subtractions made, and urged the young preacher to study and hold to the same principle and God would be pleased. Brother Haynes returned to Old Cross Roads a few years later and preached on the same chapter and convinced them that in every verse there was a great sermon text.

Brother Haynes was not blessed with wealth like Brethren Barnes and Jordan, but he went truly into almost every section of South Alabama preaching the gospel. Thousands of people obeyed the gospel under his preaching. Many congregations were established by him. I have never heard a man with more ability as an Evangelist. He was a plain clear spoken man easy to be understood, persuasive, logical and forceful with a burning love for the truth.

Brother Haynes was an outstanding debater having debated almost all the denominational preachers. Possibly his greatest debate was with Mr. Burroughs, Universalist preacher of very wide reputation.

Many preachers of the church thought Brother Haynes too young and inexperienced to meet him. The last day Mr. Burroughs with tears in his eyes advised all that it would be safe for them to obey the gospel as preached by Haynes and failed to make his last speech.

Brother Haynes not only preached in Alabama but labored extensively in Florida, Georgia and Texas. He now rests from his labor and truly his works do follow him. He "being dead yet speaketh." Brother Haynes was to me what Paul was to Timothy and Titus, a real Father in the gospel.

As the thousands who knew Brother Haynes read these feeble lines you can realize that it is indeed impossible to write his life as well as he lived it. How earnestly he pleaded for the truth of the gospel. May this feeble article cause all to awake from sin and be more faithful.

Gospel Preacher From South Alabama In The Late 1800s

Haynes - Truly great men are those who render the greatest service possible for the good of mankind. Such was brother W.J. Haynes of Grady, Alabama. Brother Haynes was born in the year 1858 and died March 20, 1925. He obeyed the gospel under the preaching of Brother Samuel Jordan of Highland Home, Alabama. In his youth, under adverse circumstances Brother Haynes received the best education that the schools of the country could give fifty years ago. He began to preach the gospel when he was 22 years of age. His life work thereafter was teaching school and preaching. He taught for number of years in his own private school at Grady, his home. He taught the Bible daily to all who came under his tutelage. Many young men went out from his school inspired to preach the word of the Lord as a result of having been taught and encouraged by Brother Haynes, but his greatest work was that of an evangelist. He traveled over portions of several Southern States laboring to build up the kingdom of God. As he was an able preacher, an excellent singer, and above all a good man, his labors were fruitful of much good. Thousands of people were lead(sic) to Christ by his ministry and hundreds of congregations were established throughout Alabama, Georgia, Florida, Mississippi and Texas. He fearlessly but very lovingly set forth the terms of salvation with convicting effect. He knew the Bible thoroughly. Very few could quote more of the Bible from memory than Brother Haynes. His ministry was one of love, for he went out without any assurance of monetary reward. He held meetings many times at his own expense. The true greatness of the man can be estimated when it is an evident fact that his own community loved and appreciated him best because they knew him best. He reared a family of several children and provided for them well. Was married the second time and spent the last years of his life at his him at Grady, Alabama. The last four years were inactive because of failing health.

In the death of William J. Haynes another great hero in the conflict for truth and righteousness has fallen. Brother Samuel Jordan preached the funeral at Prospect cemetery, near old Strata church, where loving friends and relatives paid their last earthly respects to his remains. He, like Abel of old, still speaks though he is dead.

-Fred M. Little, Firm Foundation, Tuesday, June 16, 1925, page 8 / Note: This is a timed piece. Some of those enlisted as living may be now deceased.
Note: The Dozier school was located in the southern part of Crenshaw County, Alabama. He ran this school from 1906-1909.

A great woman has fallen. What makes people great? Is it doing right in the name of the Lord? Phebe was great because she succored Paul and many others. Mary was great because she bestowed much labor on Paul. Mary Magdalene was great because she and Joanna, the wife of Chuza, and Susanna ministered of their substance unto the Lord. Ella Annette Haynes was great because she ministered to, succored, and bestowed much labor on one of the Lord’s ministers for thirty-five years. She took pleasure—yea, infinite delight—in so managing things at home that Will could go and tell lost sinners that Jesus died for them and invited them to be saved. The mother of seven children, she was always willing for her husband to go. Sometimes under the most adverse circumstances he went. All good wives are great women. She was the wife of W. J. Haynes. She was born on December 28, 1861; was baptized in 1879; died on December 21, 1909. How empty must the home be when robbed of a companion as nearly perfect as human beings attain in this life of sorrow! Is it not blessed that we have the promise of meeting again?

Death, the grim reaper, who calls alike the high, the low, the rich, the poor, has visited our town and called away one of our beloved citizens, Mrs. M. A. Haynes. Mrs. Haynes was born in 1841, and died on June 7, 1923, in her eighty-second year. She was the wife of W. A. Haynes, who died several years ago. She was a faithful member of the church of Christ fifty-five years. Three children survive her—W. J. Haynes, of Grady, Ala.; Mrs. M. L. Redmond of Montgomery, Ala.; and Mrs. G. L. Harris, of Grady, Ala., with whom she made her home; also, a large number of grandchildren and greatgrandchildren.

W.J. Haynes is buried in the Fair Prospect Cemetery in southern Montgomery County, Alabama. If heading south on I-65 proceed past the I-85 interchange and take Exit 168 (Hwy.80) and go east (left if traveling south). Signs on this exit will also direct you toward Hwy 331. Go east about one mile and turn south on Hwy 331. Travel 28 miles south to mile marker 77. You will come up on County Road 68 (Naftel Rd.) on the left. Don't turn there. Less than 100 yards past the Naftel Rd. turn off on the right hand side is a driveway. The mailbox numbers showed 24730 & 24680, Hwy. 331. Note a little dirt road that heads back north up into a wooded area. At the end is the Fair Prospect Cemetery. In the middle of the cemetery you will find the grave of Thomas J. Golson.

Also buried at Fair Prospect: Thomas J. Golson, Bartlet Hilliard, J.V. Davis, Col. M.L. Kirkpatrick. Kirkpatrick, along with J.M. Barnes and Samuel Jordan started a school together in 1881 called, Highland Home College. Kilpatrick was the brother-in-law of J.M. Barnes and co-proprietor in the college for a period of time. It was a school that served the brotherhood for many years. See more on this school HERE! 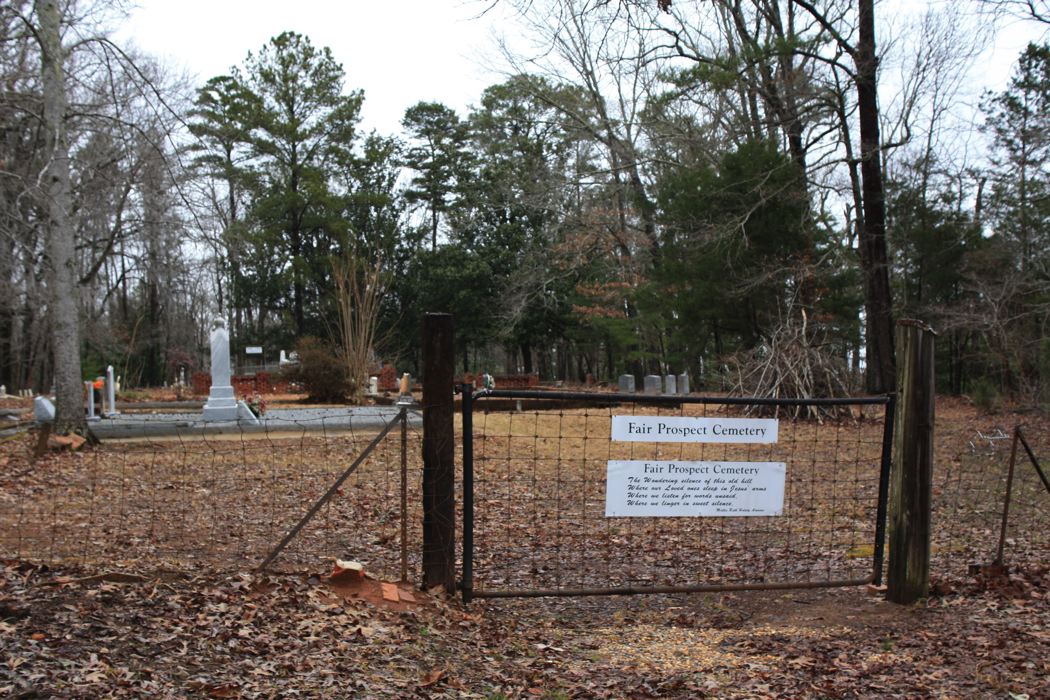 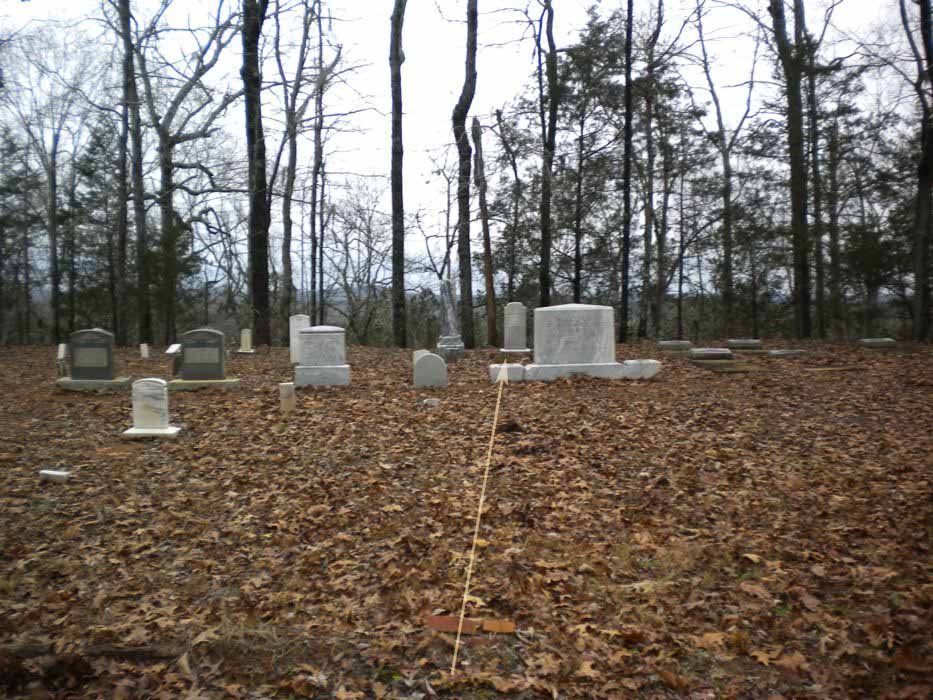 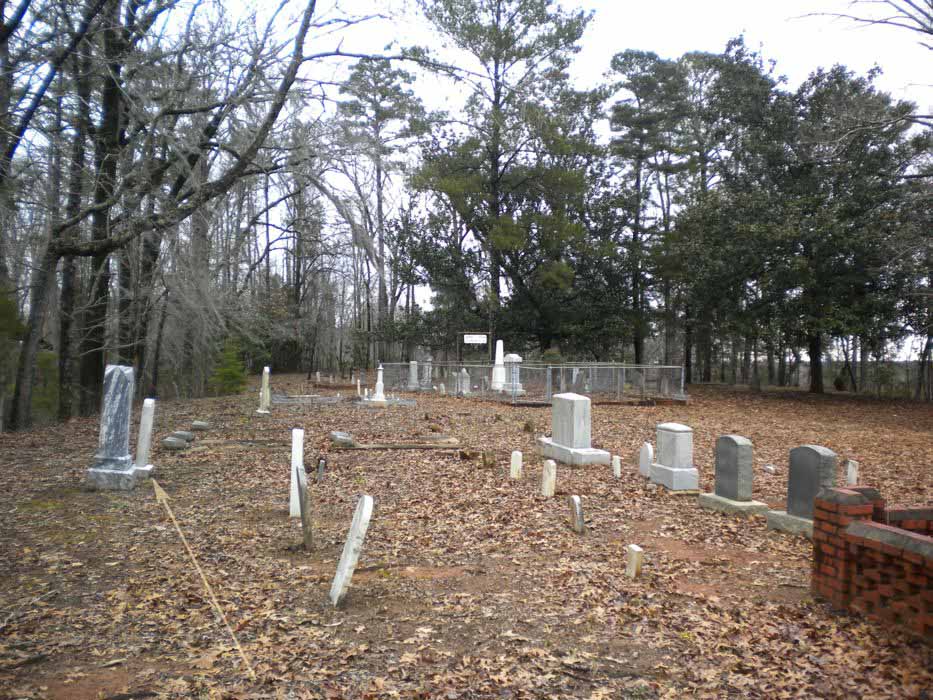 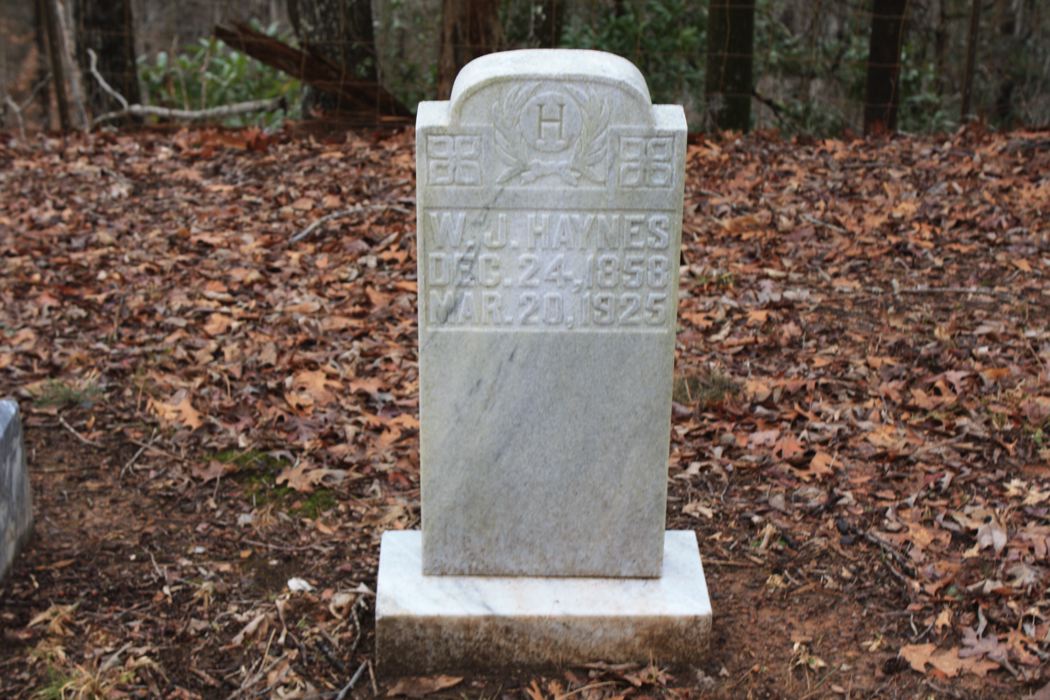 Special thanks are extended to C. Wayne Kilpatrick and Tom L. Childers. In March, 2010 while visiting in Montgomery, Alabama, a day trip was taken to visit some of the restoration related sites in south Alabama. The end of the trip involved a visit to Fair Prospect Cemetery in southern Montgomery County. The photos you see on this page were taken by them and your web editor.