Charles spoke on the 1980 Freed-Hardeman College lectureship. Here is the bio listed in the book: CHARLES McDONALD is serving as the minister for the Columbia Avenue church of Christ in Glasgow, Kentucky. He received his education from Freed-Hardeman College and has had 29 years of experience in preaching the gospel. He is presently a member of the F-HC Alumni Board of Directors and has served on the Preacher's Advisory Board at F-HC. He is married to the former Nancy Fesmire of Jackson, Tennessee and they have two children.

Obituary from the Jackson (TN) Sun, June 2, 2010: Charles E. McDonald ---Funeral services for Charles McDonald, age 77, will be held 2 p.m., Thursday, June 3, 2010 at Arrington Funeral Directors with Charles Chandler and David Powell officiating. Graveside services will be held 1 p.m., Friday, June 4, 2010 at Winfield City Cemetery in Winfield, AL. Mr. McDonald died Monday, May 31, 2010 at his residence. He was born February 19, 1933 in Winfield, AL, the only child of Felix N. and Lucille Stephenson McDonald. His early childhood was spent in Winfield and Birmingham, AL. He began school at Winfield, attended school in the Tri-City area (near Sheffield), in Jasper and in Birmingham, graduating High School at Winfield in May of 1950. Charles began preaching in November of 1950, while attending Freed-Hardeman College (now Freed-Hardeman University). After a little less than two years as a student (Bible Major) at Freed-Hardeman, he entered the mission fields of New England by a New England congregation in restoration history. He has done local work with churches in Springfield, VT, Munford, AL, Childersburg, AL, Greenville, AL, Clarksville, TN, Jackson, TN, Glasgow, KY and Maury City, TN. Charles has preached in meetings in nine states and Canada and did regular radio work in Vermont, Munford and Greenville, AL, Clarksville and Jackson, TN. He was a founding director and contributing writer of the North Atlantic Christian Magazine. He has written for Power for Today, The World Evangelist and Words of Truth. He has worked actively in Christian youth camps. He worked at Ganderbrook Christian Camp in Gray, ME, was a founding member of the board of directors for Lylewood Christian Camp near Clarksville, TN. He taught annually, for almost seven years, at Mid-South Youth Camp near Henderson, TN while working at what was at the time Allen & Edgewood congregation in Jackson (now North Jackson Church of Christ). He has been active in civic organizations. Charles was a charter member of the Hilldale Civitan Club in Clarksville, TN and served as Chaplain of the Club, later as Lieutenant Governor of Valley District for that Zone of Civitan. After moving to Jackson, TN, he was active in the Jackson Civitan Club serving as Chaplain, Vice-President and President. While living and working in Childersburg the second time, he was active in the Kiwanis Club serving as Vice-President and President of the club. He served in the community of Childersburg as a member of the Beautification Council and a Director of the Area Cheaha Mental Health Service Organization. Charles has served as a member of the Alumni Board of Directors at Freed-Hardeman University, as a member of the Presidents' Preachers Advisory Committee of FHU and is presently a member of the FHU Advisory Board. He was listed in the 1974 Personalities of the South, 1975-76 Bicentennial Edition and the 1976 Edition of Outstanding Americans during the Centennial Era and the Dictionary of the International Biography, 1976 Edition, published in Cambridge, England. Charles' goal through his years of preaching has been to build strong local congregations. Thus, most of his efforts were given to pulpit preaching and Bible Class instruction and Personal Evangelism. During more than fifty years of preaching, a considerable amount of personal and family counseling was done. In April of 2000, at the end of seven years with Maury City Church of Christ, Charles gave his resignation and retired from full time local work reaching 50 years of preaching. He has continued since to do interim preaching for several congregations. He is survived by his wife, Nancy McDonald of Jackson, TN; son, Keith McDonald and wife Patty of Bartlett, TN; daughter, Charlene McDonald of Birmingham, AL; two grandchildren, Ryan McDonald and wife Carrie, Brooks McDonald and wife Cari Beth; three great grandchildren, Dylan, Conner and Brody McDonald. Charles was preceded in death by his first wife, Nell McDonald. In lieu of flowers, the family request memorials be directed to North Jackson Church of Christ; Freed Hardeman University; or The West TN Children's Home. The family will receive friends on Wednesday June 2, 2010 from 4-8 p.m. at the funeral home. --- Arrington Funeral Directors, 148 W. University Parkway, 731-668-1111.

Directions To The Grave of Charles E. McDonald

C.E. McDonald is buried in the Winfield, Marion County, Alabama in the Winfield Cemetery. From downtown, on Hwy. 118, go north on Ashwood Dr. When getting to the cemetery on the right, go to the second entrance and enter to your right. The McDonald plot will be on your immediate left. 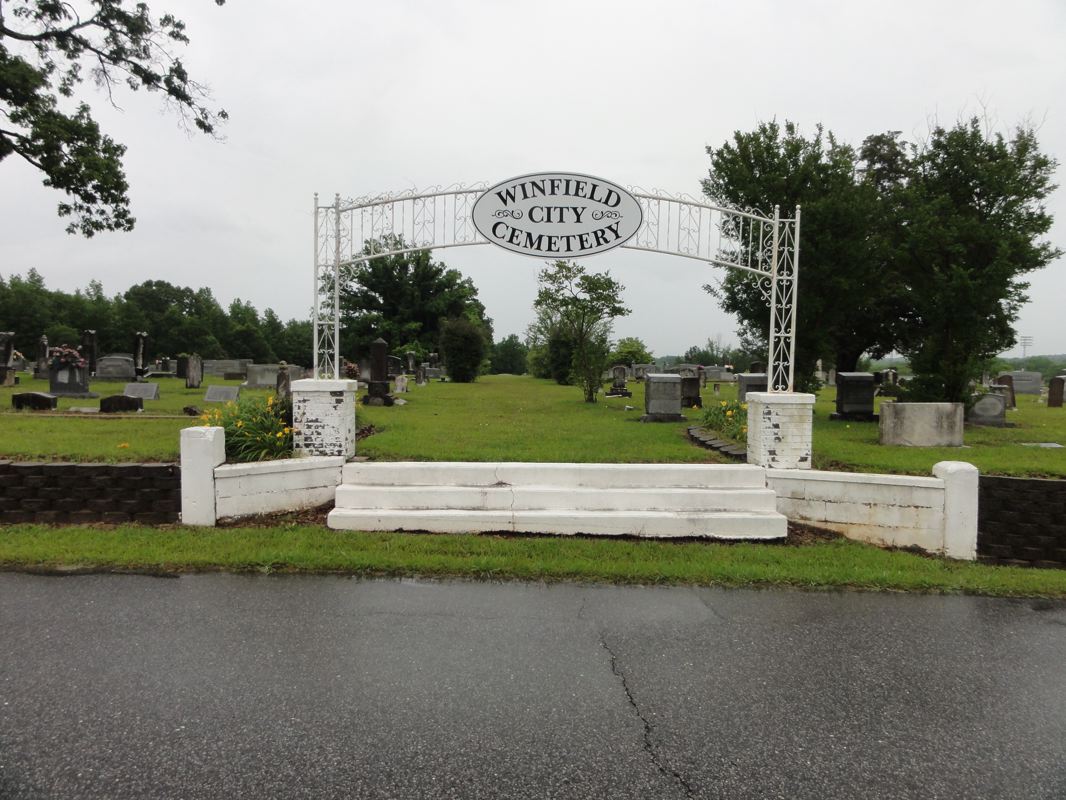