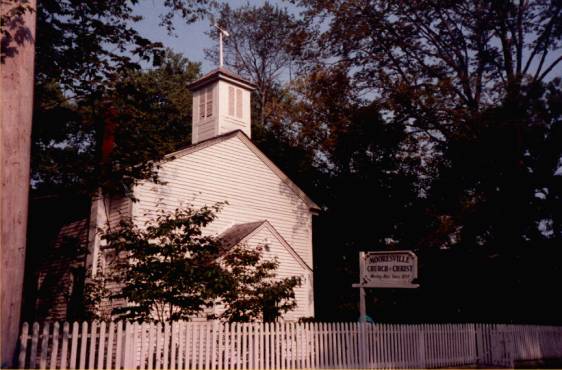 THE CHURCH OF CHRIST AT MOORESVILLE, LIMESTONE COUNTY, ALABAMA

Mooresville is a beautiful village that sits on the Tennessee River in southeast Limestone County, Alabama. When one enters this small village, it is as though he has taken a step back a hundred years in time. The people of Mooresville themselves have had great interest in preserving the village, intact, for posterity.

It was in this beautiful village that J.H. Hundley began reading the writings ofWalter Scott's journal, The Evangelist. By August 1839, he was convinced that he should be "immersed for the remission of sins."[1] He wrote a letter to the brethren in Tuscumbia, requesting that they send someone to Mooresville to immerse him. They sent Carroll Kendrick[2] who preached several sermons there and by May 1, 1840, had helped the Mooresville congregation to form and grow to seventy in number. The work continued to thrive at Mooresville until 1844 when the followers of Dr. John Thomas began to take their toll upon the small band. The Thomasites, as they were called, believed in new revelations from God, thus they were sometimes called the "New Revelation Sect."[3] Tolbert Fanning stopped at Mooresville on September 19, 1844 and preached to the brethren.[4]

Up until 1846, the Mooresville church had been meeting in a "free house of worship," a building built for all religious groups to use. Sometime in the early spring the Presbyterians had shut out brethren from the building.[5] By this time the church was in a deplorable condition at Mooresville. One reason the church was in a sad condition was the fact that there was no regular minister at Mooresville. By 1849, J. H. Dunn had moved into the county, near Athens, and was now frequenting the Mooresville brethren with preaching visits.[6] He tried to solicit a preacher who could teach in the community school, the idea being that the preacher could support himself while he preached at Mooresville, since the brethren could not support him. Fanning tried to make the situation look appealing by pointing out that the school patronage and aid of the churches would doubtlessly give a "handsome support."[7]

For the next two years the brethren struggled along without the aid of a full-time preacher, depending solely upon Brother Dunn's visits and a frequent visit from some brother passing through. One such visit came when J. J. Trott stopped and preached at Mooresville in May of 1851.[8] He wrote concerning the work in that place:

They have a very good brother for an overseer, but have suffered much for want of 'regular preaching.' We could not stay long enough to do much good. Nothing less than two or three continued efforts, in my judgment, can bring about a reaction for the better.[9]

Another reason the brethren were suffering was because they had no regular place in which to meet, except the member's homes. They were in the process of raising funds for a meetinghouse to be shared with the Sons of Temperance. Later that year on December 14,1851, Trott stopped, while on his way back to Nashville. He fully intended to preach several times, but, after one sermon, he returned to Nashville because of cold weather.[10] In the months of November and December of 1852 J. H. Dunn baptized nine persons at Mooresville.[11]

For the next two years growth was slow but Dunn kept encouraging the brethren in their work for God's kingdom. They managed to build a building by 1854. The land had been purchased in October 29, 1851 for a sum of $20.00 from James Clement.[12] They shared their meetinghouse with the Odd Fellows and Sons of Temperance. November 22, 23, and 24, 1856, J. H. Dunn preached three days, Saturday, Sunday and Monday to the Mooresville church. One was restored and six were immersed.[13] He was joined in this effort by Crockett McDonald of Moulton. In the last week of May 1857 he held a three-day meeting and four more were added to the Mooresville church. At this point several members of the Presbyterian Church had united with the brethren. No wonder the Presbyterian minister said that the church of Christ down on the corner was hatched out under the mud sills of Hell, from an egg laid by the Devil."[14]

On Thursday, November 26, 1857, Tolbert Fanning came and preached four sermons and left the following day.[15] One person was baptized at this time.

While Fanning was at Mooresville, he had to deal with an unpleasant situation. The brethren felt that they could not worship God unless the service was conducted by "officers."[16] The brethren finally agreed to attend their own worship as "Christians," and to dispense with "official service." The leading figure at Mooresville was J. H. Hundley, its first charter member, and the man really responsible for the establishing of the Work at this place. It was upon his insistence that Carroll Kendrick came to baptize him. His baptism made him the first Christian in Mooresville. Brother Hundley wrote a book, The Plan Of Salvation, in 1858.[17] The book contained eighty-eight pages and was acclaimed to be one of the best on the subject. It was Hundley who had guided the congregation thus far. One is only left to guess what the source of trouble at this congregation was; but, in spite of Fanning's teaching on the subject and Hundley's leadership, the old problem was at work again. In July of 1860, 0. P. Miller of Washington, D.C. had come to hold a meeting. At the very outset of the meeting trouble arose. Miller, being a mature minded gospel preacher, dealt with the problem and continued his meeting for ten days. Ten souls were added to the church, some of whom were "the influential of the community."[18] The meetings, according to Miller, were well attended and the whole community seemed "ready to hear the truth."[19]

Shortly after this meeting, the Devil was at work at Mooresville once more. The Old "official worship" question came about again. On October 2, 1860, Fanning came back and confronted the problem again. The older members seemed inclined to believe the need for "officials" in the service. Fanning said most of his time was spent restoring peace.[20] Fanning did baptize a "Baptist friend" who wanted to be baptized for remission of sins, while at this place. The year of 1860 had been one of the better years for Mooresville.

The year of 1861 brought sorrow in two ways. The Civil War would come to this area and one of the younger members, Johnny Tucker died in the prime of life. He was nearly twenty-three and had been a Christian for four years.[21] It was in the younger men like him, that the hope of the future Mooresville church lay. The war brought much hardship upon this area around Mooresville. Union soldiers camped near here and often made forages into the village, seeking food, horses and anything else they could take. During the Union encampment, James A. Garfield, a Union general and gospel preacher was invited to come preach to the Mooresville brethren. In a letter to his wife he wrote:

"There is a church in the village of Mooresville near by and they have sent up inviting me to speak to them on Sunday. If I am not to unwell I have a notion to speak to them."[22]

Apparently he was well enough to speak. The brethren of Mooresville boast, even today, of him having spoken in their building. One can even look upon the Bible, said to have been used by Garfield.

After the war, J. M. Pickens came to north Alabama to work. In September of that year he was called upon by the brethren at Mooresville for a meeting.[23] He found a handful of war weary Christians. They had lost most of their money, food sources, and other things that make life livable. The congregation had gone into the war with twenty-five members,[24] even after the good year of 1860, in which they increased in number. It was these sad conditions that prompted J. M. Pickens to write: "There is great destitution and want among many of the people of North Alabama."[25]

Mooresville was truly in destitution, both spiritually and physically. For five years, silence seemed to fall upon the Work in this place and no reports were made during this period concerning the work there.

Finally the silence was broken on April 17,1872, by a brother W. G. Martin in a letter to David Lipscomb. The question of a woman leaving her husband over mistreatment had arisen at Mooresville.[26] Lipscomb promptly pointed the brother to Matthew Chapter 19. For nearly two more years silence once again fell over the Work in this place. Then in the last week of June 1877, T.B. Larimore held a meeting at Mooresville, resulting in eleven additions to the church.[27] He paid the small band a very high compliment in writing:

"When they invite a teaching brother to visit them, the understanding is not that he is to labor 'for' them, but 'with' them. They work while he works and sometimes they work while he sleeps."[28]

In the first week of July 1880, E. A. Elam, who had just been graduated from Burritt College a year before, came and held a four day meeting with three additions.[29] After Elam's meeting nothing further is written concerning Mooresville until October 27, 1888, when A. R. Moore reported that he was to hold a meeting at Mooresville but was prevented from holding it due to a yellow fever epidemic, six miles away at Decatur.[30]

Looking back, one wonders how the work at Mooresville endured, since they have never had a fulltime preacher. Their problems over "official service" and the taint of the "New Revelations" sect hindered their growth at times when other churches were growing. The opposition from their Presbyterian neighbors never was a major problem, but did cause some concern at times. They did manage to survive however, even when other surrounding churches were dying during the Civil War. With the determination to survive without permanent preaching, one is left to wonder how the Work would have grown with a fulltime preacher.

Today, the brethren are a small group, still proud of their heritage and still meeting in their original building but not growing enough to have fulltime help. Their help has come from the surrounding churches in recent years. The brethren at Beltline in Decatur have helped in the last few years, considerably. We can only resort to wishful thinking, but wouldn't it be great to see the Mooresville brethren increase and become strong numerically again?

The small village of Mooresville, lies just west of Huntsville, Alabama off I-565, about two miles east of I-65. The Mooresville exit will be the first exit nearest I-65 toward Huntsville. Follow the signs into Mooresville. The little town of Mooresville itself is as much worth a visit as the old Church of Christ building that is located there. The setting of the town is from the Ante-Bellum period. Most all the homes there are well over 100 years old. Mooresville has the oldest continuously used Post Office in the state of Alabama. Many stop at Mooresville just to get a letter stamped. Be sure to get out and walk the streets of this village that was once the set for the Disney movie, The Adventures Of Huck Finn.