A Messenger Is Gone But The Message Goes On

These words of the apostle Paul to the Corinthians, come to my mind when I think about the life of brother Jimmy Vest. The letters of Paul were some of Jimmy’s favorite passages and so it is no surprise Jimmy’s life reflected Paul’s teachings.

Brother Vest passed from this life June 10, 1991 at the age of 50, from a heart attack while in his sleep. He had served as the minister of the Jackson Heights Church of Christ in Florence, Alabama since March 4, 1979, after leaving the Chestnut Drive Church of Christ in Atlanta, Georgia. He is survived by his wife, Joyce Cowger Vest, Florecne; a son, Jim Vest and his wife, Melanie, of Florence; a daughter, Beth Vest, Lexington, Alabama; parents, Mr. and Mrs. Raymond Vest, New Albany, Mississippi; a brother, John Vest, Nashville, Tennessee and a sister, Betty Young of New Albany.

Over 1,000 friends attended the visitation at the Elkins Funeral Home in Florence and the Jackson Heights auditorium was filled beyond its 700 seat capacity for the funeral service. Ray Hawk of Jackson, Tennessee; James Segars of Tupelo, Mississippi;and this writer had the honor and privilege of speaking at the funeral of this great gospel preacher. Congregational singing was led by Wayne Lewis of Jackson Heights. Burial was in the Tri-Cities Cemetery in Florence.

Brother Vest began his preaching career while still a student at Freed-Hardeman College in 1965. He had given up a very lucrative position in Washington D.C. to attend FHC. After marrying Joyce in 1961, Jimmy worked for the Federal Bureau of Investigation in Washington. In 1963, Jimmy went to work as a clerk for United States House of Representative Rep. Harry R. Shepherd, From California. After working a year with Rep. Shepherd, Jimmy and Joyce left Washington for Henderson, Tennessee and Jimmy attended classes at FHC in January, 1965. He attended year round and finished in June of 1967 after completing the three year Bible Study.

Jimmy was awarded a full scholarship through Johnnie Donaghey Wallace Foundation in 1966.

While in school, Jimmy began preaching in Finger, Tennessee and later preached in Kewanee, Missouri. His first full-time work was in Charleston, Missouri in 1967. After three years, Jimmy and his family moved to Gadsden, Alabama, where he became the minister of the Rainbow Drive congregation. In the mid-seventies, the Vests moved to Atlanta, Georgia to work with the Chestnut Drive Church of Christ.

It was also in the 1970’s that Jimmy continued his education. He earned a Bachelor’s Of Arts Degree from Samford College in Birmingham in May, 1974 and a Masters of Arts Degree from the Alabama Christian School of Religion in Montgomery in August, 1978.

In March, 1979, the Vests moved to Florence and Jimmy soon had made an impact on the northwest corner of Alabama. Jimmy began to hold gospel meetings throughout the area, averaging six per year and had meetings already scheduled into 1994. He appeared one week a month on the television program, Televisit With The Bible, on WOWL-TV in Florence.

Over the next 12 years with Jimmy serving as minister at Jackson Heights, the congregation increased to the point that the auditorium had to be enlarged by 250 seats. An activity building was constructed to host fellowships, devotionals and to be used as a reception hall for weddings. Jimmy taught a Ladies Bible class weekly, a Sunday morning class, a Wednesday night class, delivered two sermons on most Sundays and once a month, preach the five daily TV sermons.

Jimmy Vest was, “ . . .steadfast, unmoveable, always abounding. . .” Certainly as a Christian, Jimmy stood firm in his convictions. These convictions were based on Bible authority and truth. Jimmy would not allow his convictions to be moved. He had a love for God and a love for God’s Word, as strong as anyone could have. He believed in Jesus Christ as the Son of God and devoted 25 years of his life spreading the gospel message.

Jimmy got involved in people's lives, sharing both the good times and the bad. One could count on Jimmy to be by the bedside of the sick, to be at the home of the bereaved, to share the joy of a newborn baby or to enjoy being around the people he knew and loved so dearly. Jimmy stayed on top of the issues of the day, to know what was going on within the brotherhood and he remained steadfast in defending the truth.

Jimmy had an ability to analyze certain situations, to see possible problems and try to head them off. Jimmy loved the church and longed for it to grow and prosper. Less than two weeks before his death, Jimmy taught a class on how to teach the Open Bible Study by Ivan Stewart.

Concluding the session, Jimmy said, "We can win people to Christ. We have to have a good, willing attitude." Jimmy had a good willing attitude, an attitude which would not allow him to accept anything less than the best he had to offer.

As a hobby, Jimmy participated in marathons and triathlons. He often competed in local races as well as annually in the Peachtree Run in Atlanta. In 1987, Jimmy qualified and ran in the 91st annual Boston Marathon, finishing the 26 mile course with a time of 3:26:06. He always completed the course, regardless if it was his hobby or some matter of the church or a situation involving one of the members.

Jimmy will be missed by all of us. Countless numbers of living have been affected by the life of Jimmy Vest. He loved to preach the gospel and would spread the word of God any opportunity he had, whether in the pulpit, running in a race or eating at a restaurant.

Jimmy was encouraged by seeing the positive effect the gospel had on people and their lives and he was glad to be a child of God. He would be pleased that so many people are remembering him now and the work he did while on the earth. But he would much rather have all of us remember the teachings of Jesus and what the Lord has to offer us. He cared about lost souls and he determined in his life to do all he could to help individuals to spend eternity in heaven.

We must keep Jimmy’s death in its proper perspective and remember, a messenger is gone but the Message goes on.

Directions To The Grave of Jimmy Vest

Jimmy Vest is buried in the Tri Cities Memorial Gardens in Florence, Alabama. It is located at 2601 Florence Blvd., Florence, Alabama. The office number is 256.764.7542. He is buried in the Garden Of The Apostles, at the front-center of the cemetery. While in the cemetery, be sure to visit the grave of another gospel preacher of yesteryear, A. R. Hill. 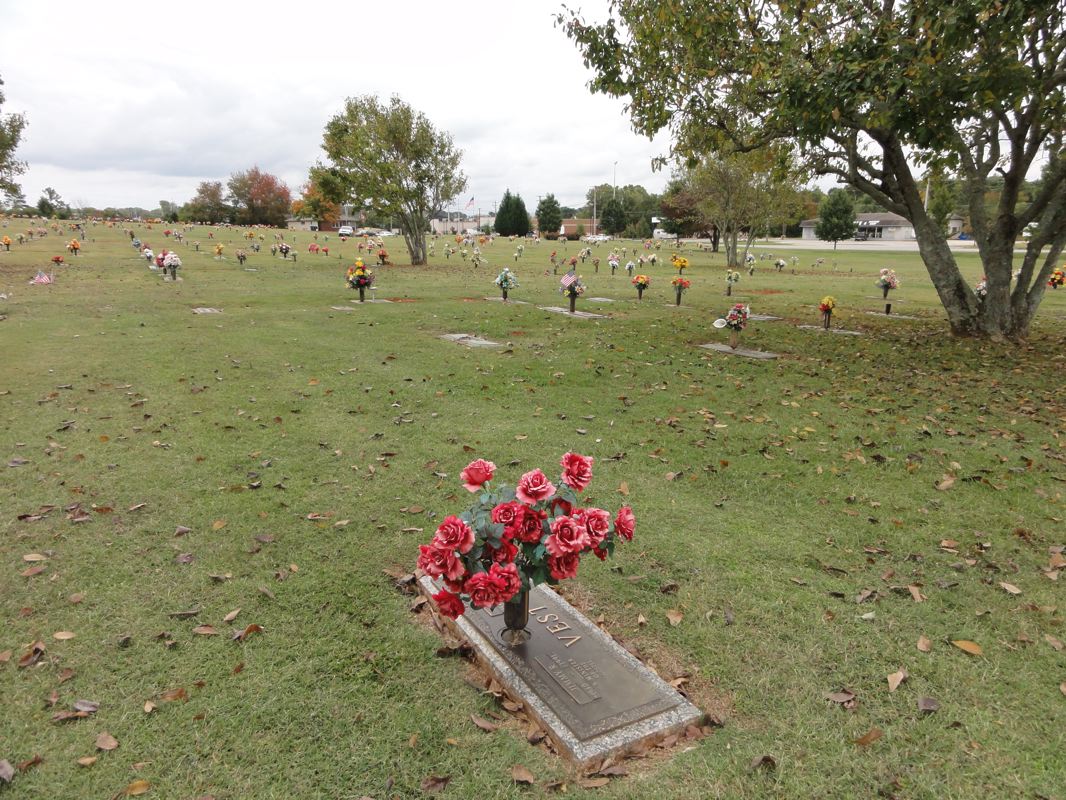 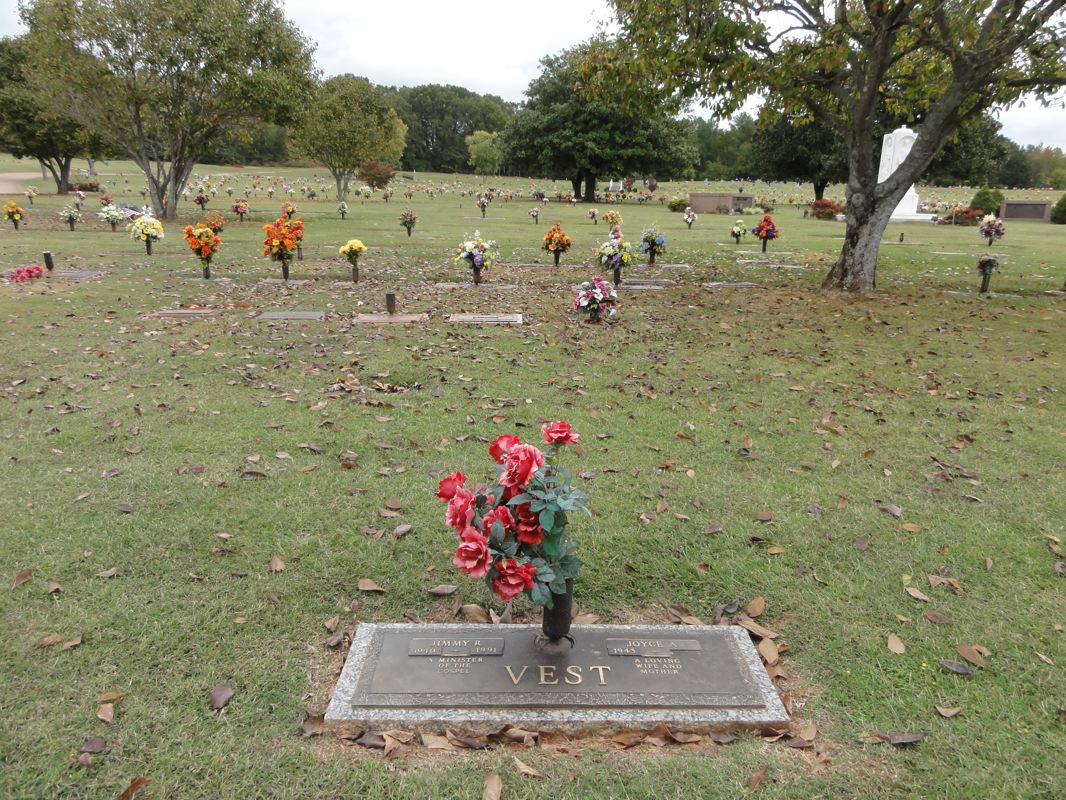 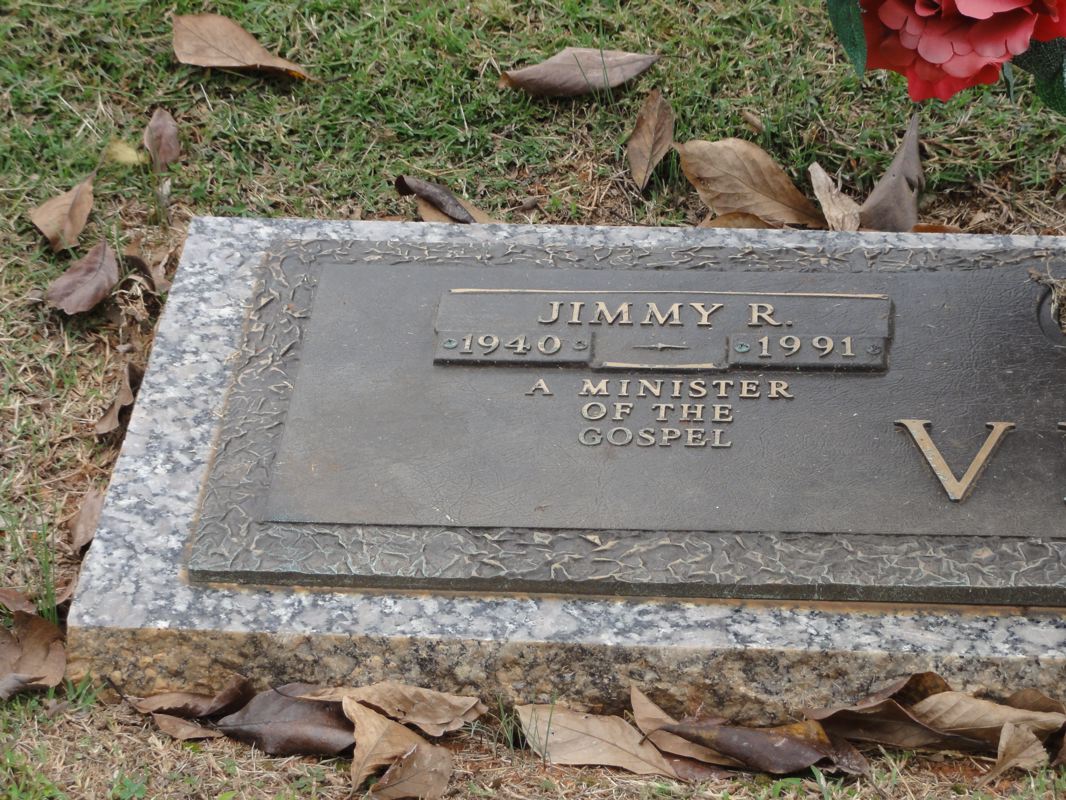 Editor's Note: It has been my privilege to know the Vest family through the years. When I was in High School at Greater Atlanta Christian School in the 1970s, the Vests lived in the metro Atlanta area. Both Jimmy and Joyce taught at GACS, and their children attended school there. Later while my family were in the Shoals area of NW Alabama attending Heritage Christian University (IBC then), Jimmy was preaching at Jackson Heights. During that time, Jimmy was a great source of encouragement to me as a young preacher of the gospel. I'll never forget an occasion when I ran into him in a grocery store one evening. We stood for over an hour talking about a particular problem. He was so attentive to my concerns, and his advice was so fatherly, filled with godly wisdom. Jimmy was a true friend to me and my family. Jenny and I had left the Shoals area, living in New Zealand, when we heard the shocking news of Jimmy's unexpected death. We were so sorry to hear of his passing, and knew that his gain was truly our loss. His family, the church, and the world was robbed of a truly marvelous person. His departure to be with the Lord only makes heaven more attractive, as it gives us the hope of a greater reunion some day. Special thanks to C. Wayne Kilpatrick for the photos of the grave of above, and Basil Overton for printing the great tribute to Jimmy in his magazine back in 1991.