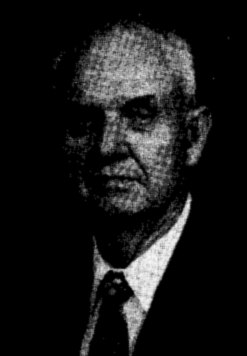 A great tragedy took place at 9:30 p.m., July 17, 1992 about two miles from his home, when a drunken driver veered into the left lane and struck head on at the left headlight of Luke Williams' Toyota. The steering column was driven with great force into his chest, and the seat was pushed completely to the rear of the car. Luke died instantly, but his wife, Mullis, was spared with only cuts and many bad bruises.

"Luke," as we all called him, was born July 23, 1921, in Cullman County, Alabama, about six miles from Jones Chapel where he was the regular preacher when he was killed. He was born into a good moral family. His folks were all Baptists, and both his father and grandfather were Baptist preachers naturally, he became a Baptist.

At age eighteen, Luke entered military service. He served with distinction in World War II, mostly in the European theater. After he served in Guam, Okinawa, and Korea. While stationed at Brookly Air Force Base in Mobile, Alabama, he attended the old Holcomb Avenue Church of Christ (now Pleasant Valley) with his wife, Mullis. I moved to that congregation as minister in August, 1957, and my wife and became close friends with Luke and Mullis. I studied many time with Luke, and he learned the way of the Lord more perfectly in the spring of 1958, it was my happy privilege to baptize him for the remission of his sins. (Act 2:38.)

Luke took his religion very seriously, and he continued to study the Bible. We worked together in personal evangelism and converted a number of people. As his twenty year retirement time approached (September, 1960), he was still a relatively young man, and I suggested to him that he spend the remainder of his life preaching the gospel. He had a very logical mind and a good knowledge of the Bible. After attending a lectureship at Freed-Hardeman College, Luke made up his mind to preach. After moving back to his home area in Cullman County, Alabama, he preached his first sermon on December 25, 1960. For the first year, he preached by Sunday appointment at Prospect, Wheeler's Grove, Chance's Crossroads and perhaps other placed. In December, 1961, he began his first full-time ministry at Jones' Chapel, about 15 miles west of Cullman, and this continued for four years. His next work was a Midway in Lawrence County, where he served eight years. Then he moved to Eva, in neighboring Morgan County where he preached ten years. His again at Jones Chapel. During this tenure, Terry Michael and Larry Pruitt shared the pulpit with him for eight years.

Luke was a dedicated student of the Bible. His sermons were filled with scripture, and he always preached without fear or favor. He truly tried to please God and not man. Luke and Mullis were excellent personal workers. They were loved dearly every place they labored. They were great supporters of mission work, and very generous in their giving. There was no sham or facade about Luke. There was not a hypocritical bone in his body. What you saw in Luke was what you got.

The way Mullis adjusted to this tragedy amazed us all. On Sunday, from 3 p.m. until 9 p.m.. she stood at his casket comforting the estimated one thousand visitors who came. She used the occasion to teach the unfaithful and the non-Christians, to use his sudden death as an example to be ready to meet the Lord at a moment's notice. The funeral was held on Monday, July 20, at Moss Funeral Home in Cullman. About thirty preachers were in attendance, and the funeral director said it was the largest funeral he could remember in his experience. The congregation sang, "Living By Faith," "I'll Walk with the King," and "In Heaven They're Singing." The speakers were Terry Michael (Addison, Alabama), Jeff Jenkins (Montgomery, Alabama), and I. All the preachers served as honorary pallbearers.

Besides his dear companion, Mullis, Luke is survived by two brothers and two sisters. Luke made his mark in the kingdom, and all his good work will follow him to the judgment. (Revelation 14:13.) He has gone to his "long home." (Ecclesiastes 125.) We all will soon follow, prepared or unprepared. His body, awaiting the resurrection, was laid to rest in the beautiful mausoleum in Memory Gardens, Cullman, Alabama.

Directions To The Grave of Luke Williams

Luke Williams is buried in the mausoleum at Memory Gardens Cemetery in Cullman, Alabama. North of Birmingham, take I-65 toward Cullman and get off at Exit 304/Hwy. 69 and head toward town. After a couple of miles turn right just after the Walmart Store on Swafford Rd. This road will dead into Hwy. 31/2nd Ave. Turn right. Go one block and turn left on Beech Ave. SE. Then turn right on Old Bolte Rd. Go out Bolte Rd. about one mile. Enter the second entrance. In the distance you will see the chapel/mausoleum at the top of the hill. Drive up to it and go in. As you enter into the rear of the chapel look to the wall on your left side (East Wall). Count four columns in the mausoleum wall from the rear. The second one from the top will then be William Luther Williams. 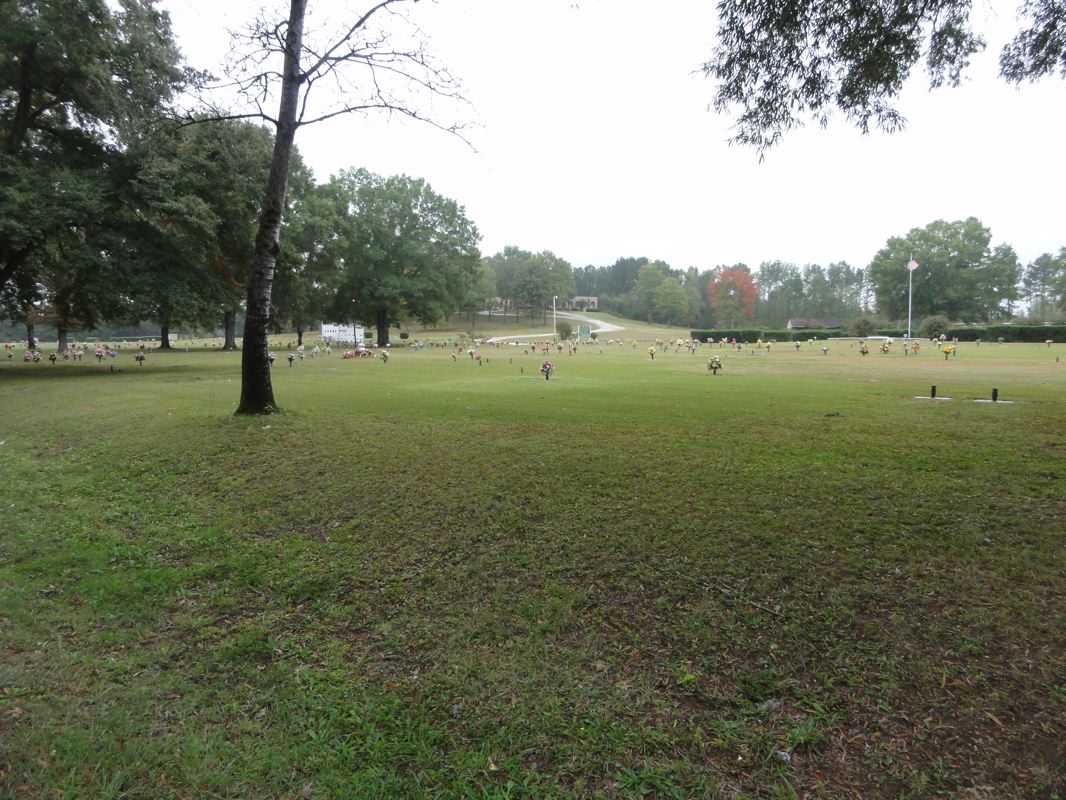 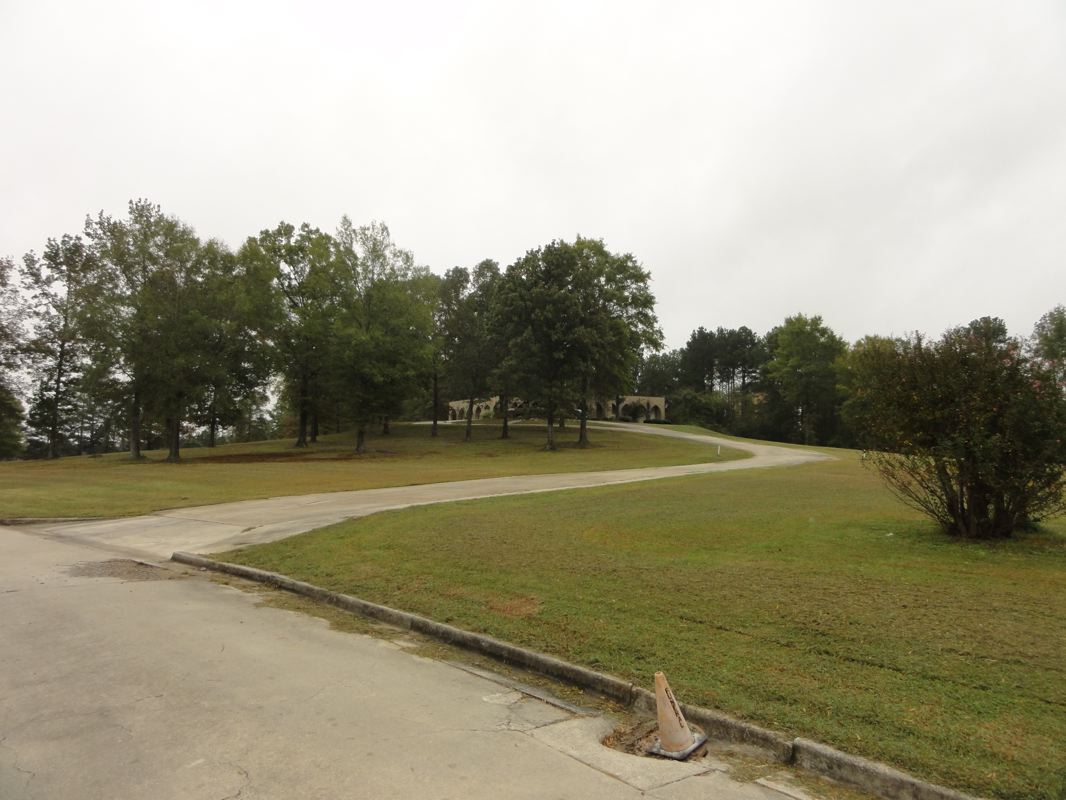 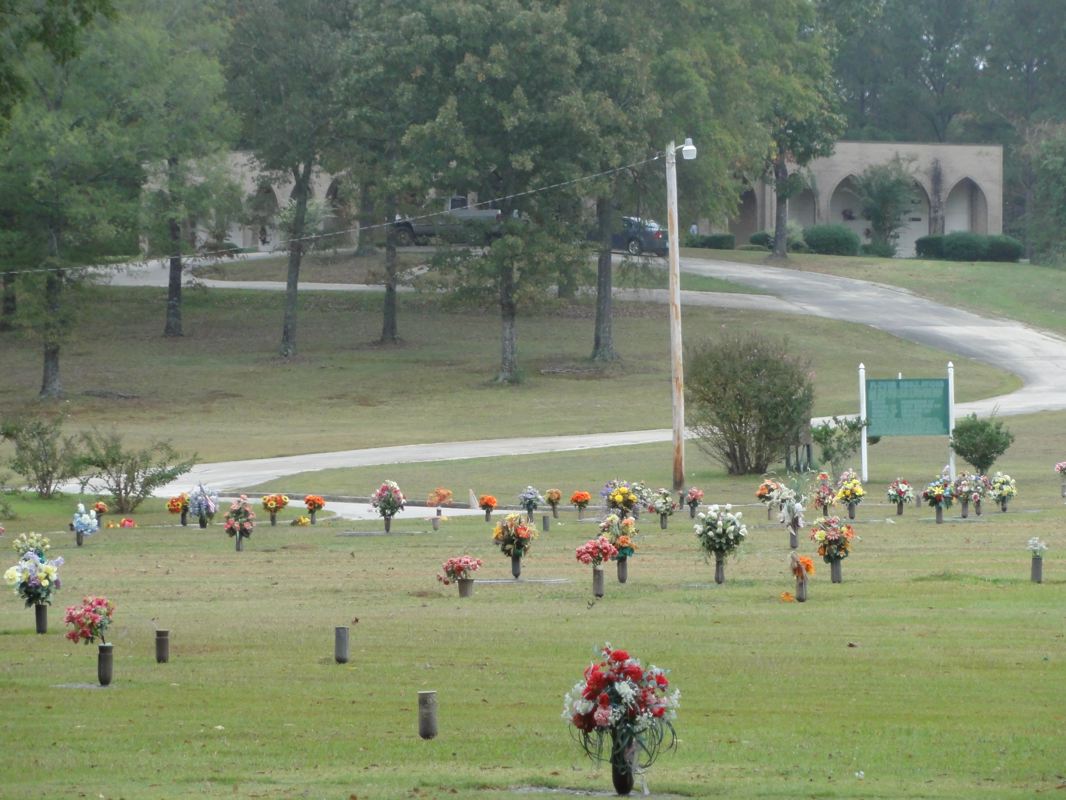 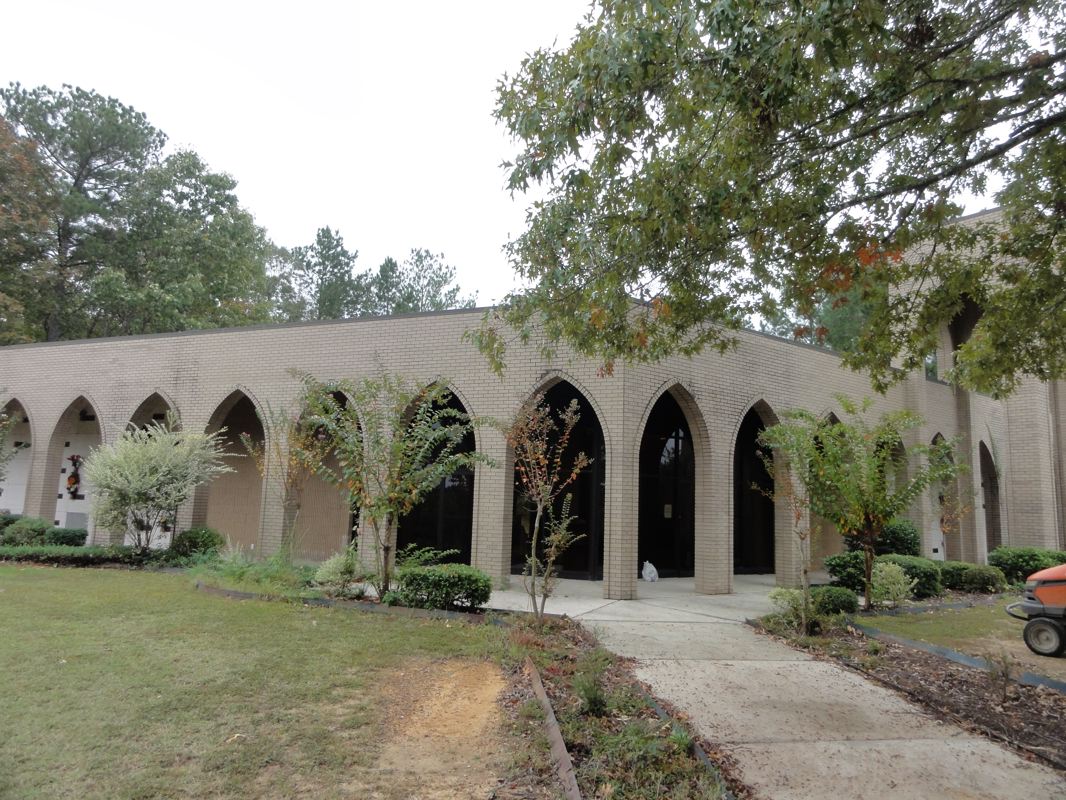 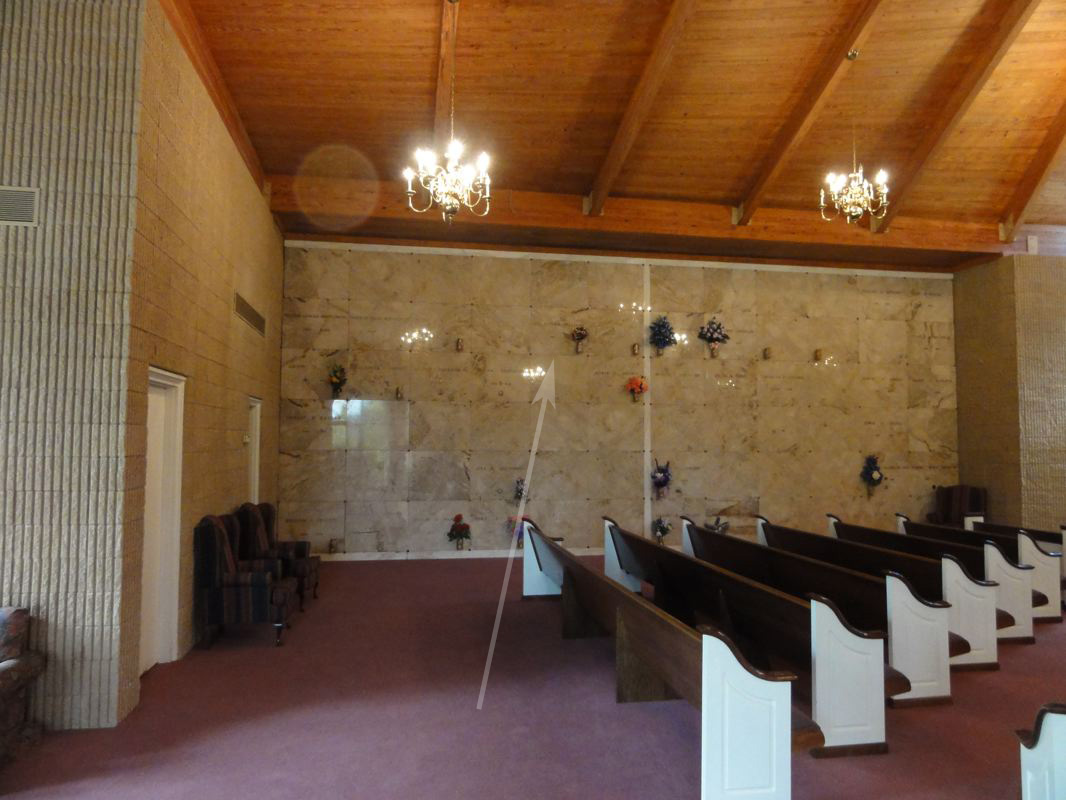 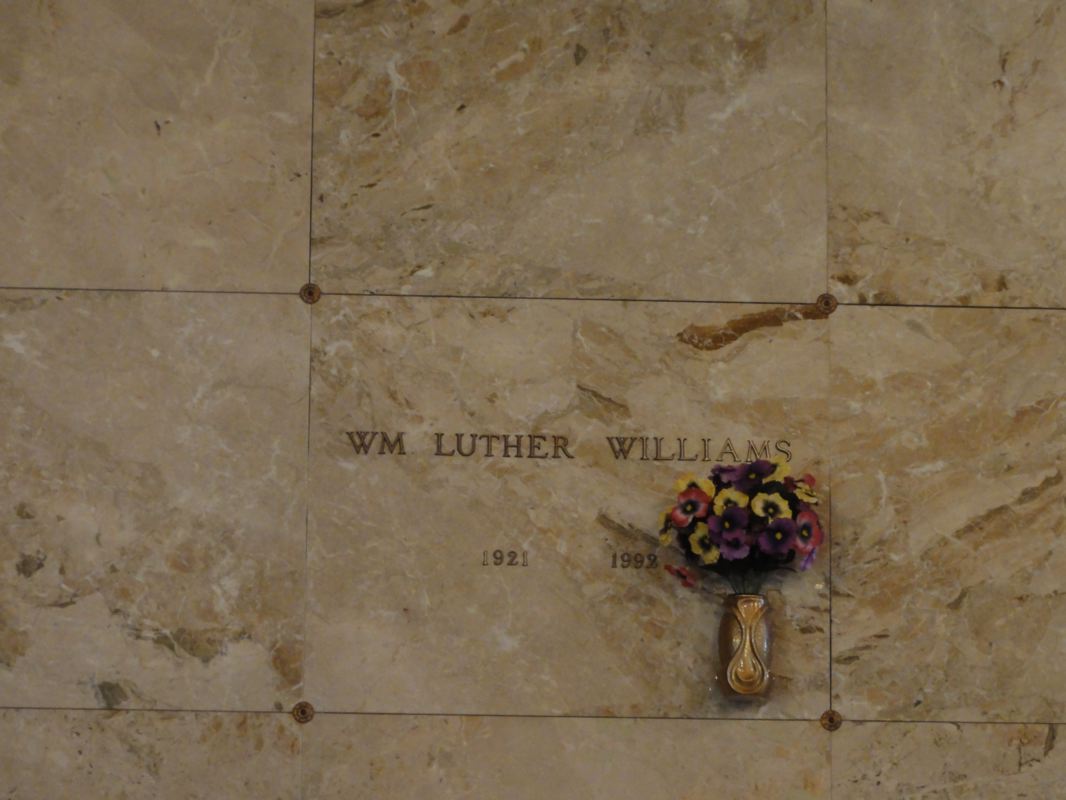 Special thanks to Tom. L. Childers who assisted me in locating the grave of William L. Williams. We spent a day together in October, 2011 looking for burial locatons near Cullman, Alabama