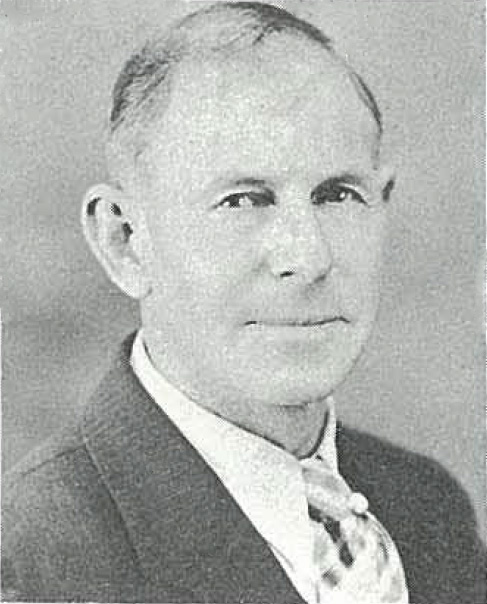 This lovable minister of God's word endeared himself to a host of the Lord's people with his self-forgetful service. Known far and wide as Bro. Frank Eldridge, his name was not Frank at all but Marion Francis Eldridge. His friends soon shortened the given name of Francis to Frank. Even his credentials were recorded in this name.

Marion Francis Eldridge was born May 22, 1873, in Franklin, Kentucky. As a young man he came to Williford, Arkansas, where he worked and started teaching music. He was a Methodist and began preaching for them in the area.

Miss Rosa Rader saw him going down the road in a buggy one day and laughingly remarked, "He's mine if I never get him." She lived at Hilltop, near Williford in Sharp County. She did get him in 1901, when they were married and made their first home at Hilltop.

A hard student of the Bible, he heard Bro. Bynam Black and was greatly moved by the simplicity of the gospel. The particular point was a lesson on the plan of salvation, where Faith, Repentance, and Confession are 'unto' salvation but baptism puts one 'into' Christ. He said he didn't know why he had never seen that before.

Consequently on Sunday morning he went to the Methodist Church, where he preached and announced to the astonished congregation that he was just wrong and he was going that very day and be baptized into the Church of Christ. Evidently he knew where Bro. Black had a baptism scheduled; for that afternoon Bro. Eldridge's wife asked to go to the baptism and if he would go to the house and get her a dress. He thought she just wanted the dress to wear but he knew better when she stepped forward with him at the water's edge and demanded baptism. This was soon after their marriage and their home became a Christian home.

Being an excellent singer and Sunday school teacher, his services came to be in demand and as confidence in him grew among the churches he was called upon often to preach and soon hfs time was filled. There existed a strong congregation in those days at Oconee on Dry Creek, where it runs into Eleven Point River. The congregation now has been dissolved into the McIlroy church. The Oconee-church ordained Bro. Frank Eldridge on March 16, 1909, as a gospel preacher and gave him the following recommendation as credentials of a gospel preacher:

Oconee, Arkansas
TO THE CHURCHES OF CHRIST
Greetings:

This is to certify that Bro. Frank Eldridge is a member ofthe Church of Christ, that he is a true Christian in every way; and we recommend him to the brethren as a preacher of the gospel of Jesus Christ and bid him Godspeed in this glorious work.

The preaching associates of Bro. Eldridge were strong men being John L. Fry, Jesse B. Lashlee, and Bynam Black, who all lived in Randolph County. at the time on 'Nubbin' Ridge.' Bro. Eldridge was an apt pupil and very soon became a strong preacher of the faith. Near the time of his ordination he moved to Williford, where he worked in the rock quarry and preached allover Sharp County. It is reported that he just about baptized everyone between Evening Shade and Williford. In 1912 he held a meeting at Bettistown and baptized sixty in the one effort. Quite a few still live, who were baptized then. During this period (about 1910), he baptized Caleb Higginbottom, who became an outstanding gospel preacher.

In 1915 he moved to Evening Shade where he labored for two years. In 1917 he moved to Black Oak, Arkansas, where he farmed on Bro. Ed Crisso's place and worked for Frank Smith as a clerk in a general store. For two years he preached and taught music and worked until 1919 when he moved to Mangrum community just out of Black Oak, five or six miles. He farmed there for five years and would walk often to Black Oak and preach, Sunday and Sunday night and back to Mangrum and work the next day.

I heard him tell a beautiful story of these days, a quarter of a century later, and the tears flowed down his cheeks as he told it. He was holding an open air meeting on Upper Poplar Ridge in the East bottoms of Craighead County. Bro. Eldridge was telling this story to emphasize the effect of the gospel on the lives of men. He told how a tramp and his wife appeared one night at the meeting and took a back seat. They were both ragged and dirty. They listened and came back. Two or three nights later they were a little closer, had washed up some, and repaired and laundered their clothes. Gradually they worked up to the middle section of seats. One of the brethren asked the preacher, Bro. Eldridge. if that tramp and his wife came up to be baptized, would he do it. Bro. Eldridge replied, "Of course, and if I'm any judge of human nature, they are going to come up before the meeting is over." And they did and he baptized them. A few years later he was preaching at Red Onion, Missouri (on the state line, just north of Monette, Arkansas and a nice looking man, dressed neatly in kaikas, came forward after services to talk to him. The man carried a fine baby in his arms. The man said, "Bro. Eldridge, do you know me?" He answered, "No. If I have ever met you before, I don't know of it!! The man said, "Do you remember baptizing a bum and his wife on Upper Poplar Ridge." Bro. Eldridge said, "I do." "Well," the man said, "I'm that fellow. And Bro. Eldridge, we now have twenty acres of land here in Missouri, we have a little Ford car out in the yard, and it is all paid for, and we have this fine baby. And Bro. Eldridge, I want you to know the gospel has done that for us." The tears flowed freely as the old preacher concluded his story.

In 1924 he moved to Red Onion and preached two years, then he returned to Black Oak in 1926. In 1927 he was called to Huntsville, Alabama to hold a meeting. Posters advertising the meeting were printed and posted. A lady saw one and said, "I know that's my brother." She said nothing to anyone at the meeting until she had sat through the services and then she went up to see her brother. It was a happy reunion after twenty-two years as each had lost track of the other. Her name was Maggie Ramsey.

Bro. Eldridge had developed skills as a handyman. 'Jack-of-all-trades' was the name in those days. He was a good carpenter and paper-hanger. In 1928 he moved to Nashville, Tennessee, so he could drink water from the sulphur wells there, to aid his failing health. He plied his skill of carpentry and paper-hanging for a livelihood and preached often as the opportunity afforded itself.

In 1940 he retired at sixty-seven and came to Trumann, Arkansas to live with his son, Bynum. He had ten children, six boys and four girls, and had named one James Francis, part of his own name, one for Bynum Black, one after Andy T. Ritchie, and one after E.M. Borden, thus honoring his contemporaries. Two of the girls bore the Bible names of Ruth and Naomi.

When one of his sons died, he went to Caraway to live with and help Juanita, his daughter-in-law. She was very good to the now aged man. She gave him a dinner on his ninetieth birthday, which pleased him very much.

The last year of his life old Bethany Church in Randolph County which in earlier days he had known as old 'Dirt-dobber,' invited him to speak at their homecoming. He did and conducted his last service in the area where he had preached so much of his life. Often he had held meetings, where his only pay was produce or canned fruit and once some chickens.

Shortly before his death he left detailed instructions for his funeral service. He had a stenographer at the Bank of Caraway type it up and then he gave it to Bro. Mutt Bray. He named Bro. Leonard H. Fielder and me as speakers and had named his pall-bearers and honarary pall-bearers. He had chosen Bro. Arlie Crisco as song leader.

On May 3, 1964, he fell asleep in Jesus, just a few days short of ninety-one years of ag.. His funeral was conducted according to his wishes on May 5, 1964, at the Caraway Church of Christ. Burial was in the Caraway, Ark. cemetery.

Marion Francis Eldridge was born May 22, 1873, in Franklin, Kentucky. He grew up under Methodist influence and when old enough began preaching for the Methodist Church.

After he moved to the Williford, Arkansas, area, he married Rosa Rader and heard the powerful Bynum Black preach on the plan of salvation. The very next Sunday he renounced his Methodist affiliation before the church and announced that he was going to be immersed by Black and become a gospel preacher.

The Oconee Church of Christ in Randolph County issued credentials to him on March 16, 1909. J.A. Pruett, James G. Fry and J.S. Fry, Elders of the church, signed his docwnent. Evidently Eldridge was well known in that region of the country as a faithful gospel preacher. In later years he would preach often for Bethany, Mcilroy, and other churches in the county, as well as in surrounding counties and other states.

His death occurred on May 3, 1964, and his memorial service was held May 5 at the Caraway Church of Christ with Leonard Fielder and
Boyd Morgan officiating. His body awaits the glorious resurrection in the Caraway Cemetery.

-Dr. Michael L. Wilson, Arkansas Christians: A History of the Restoration Movement in Randolph County, Arkansas 1800-1995, c.1997, page 190. Note: This is a timed piece. Some of those enlisted as living may be now deceased.

Directions To The Grave of M.F. Eldridge

The little town of Caraway, Arkansas is just slightly N-NW of Memphis, Tennessee. From Memphis make your way toward Jonesboro, Arkansas. Head up I-55 and take the Hwy. 63 turnoff toward Jonesboro. Just as you are about to get into Tyronza, turn north (right) on Hwy. 135. Go through Lepanto. The road will finally come into Caraway. When you get to Hwy. 158, just cross it and continue on Cemetary Rd. The cemetery will be on the left. Enter the first entrance you come to. Head toward the rear and stop the car. Enter to your left (south) and head toward the fence line. You will see two or three Eldridge family markers. Frank Eldridge's grave will be among them. 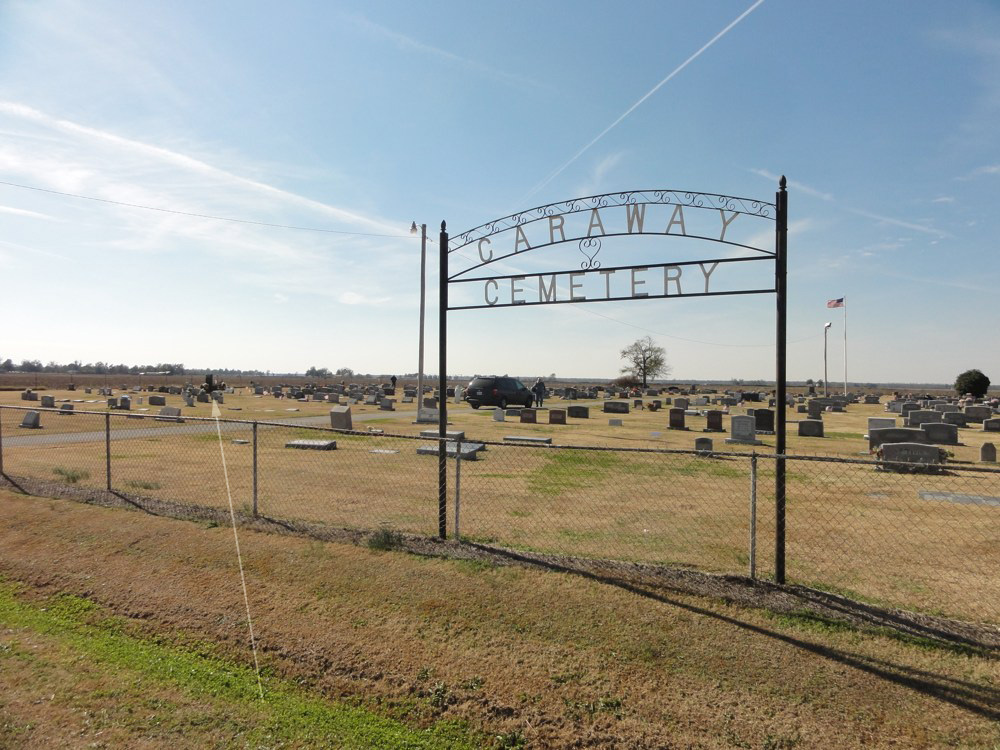 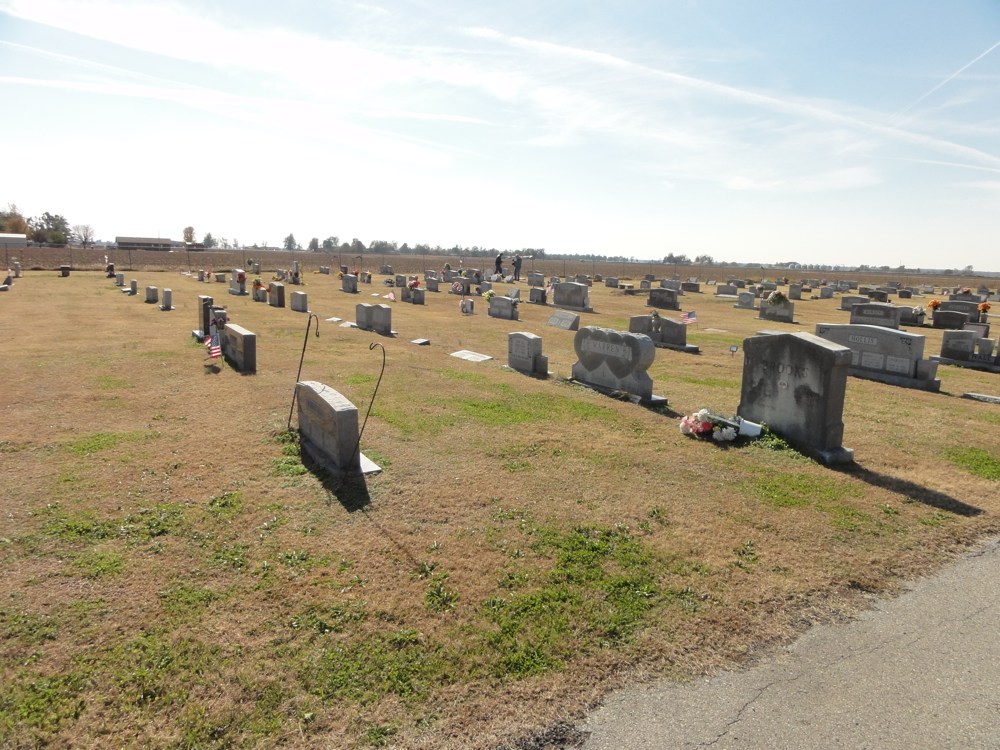 Location of Eldridge plot in distance Where Tom L. Childers and C. Wayne Kilpatrick are standing 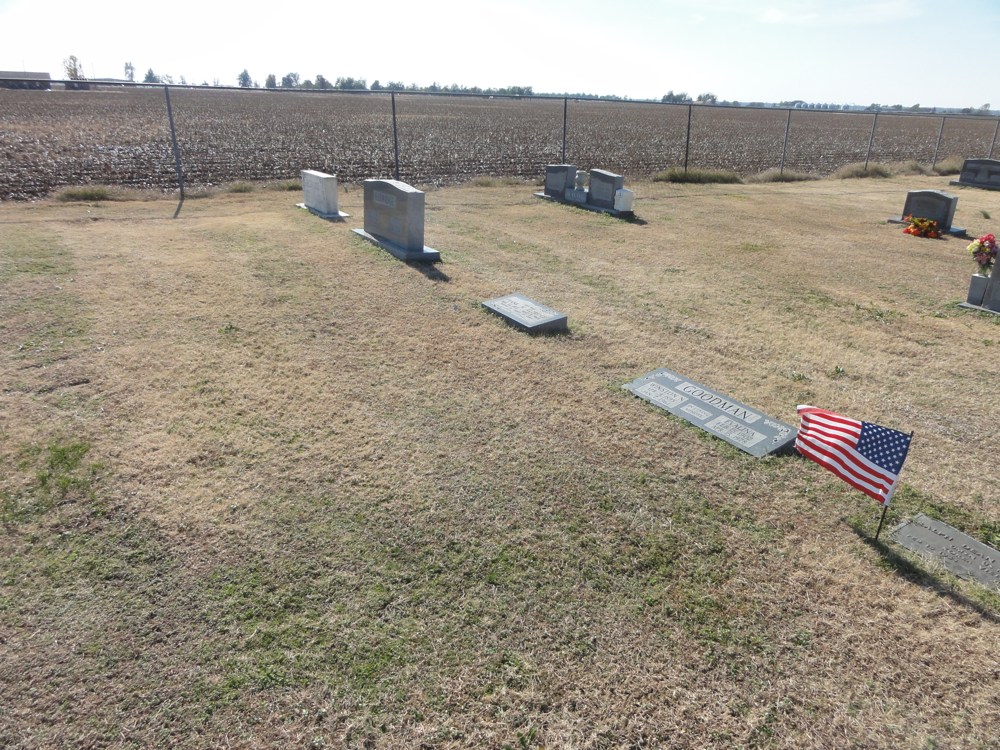 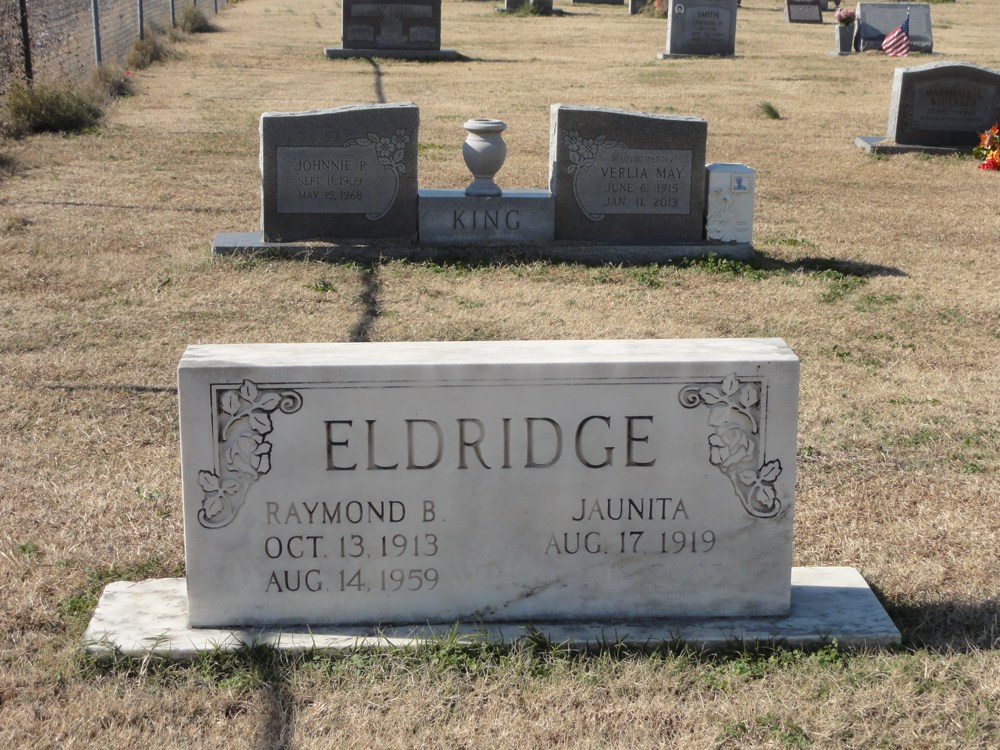 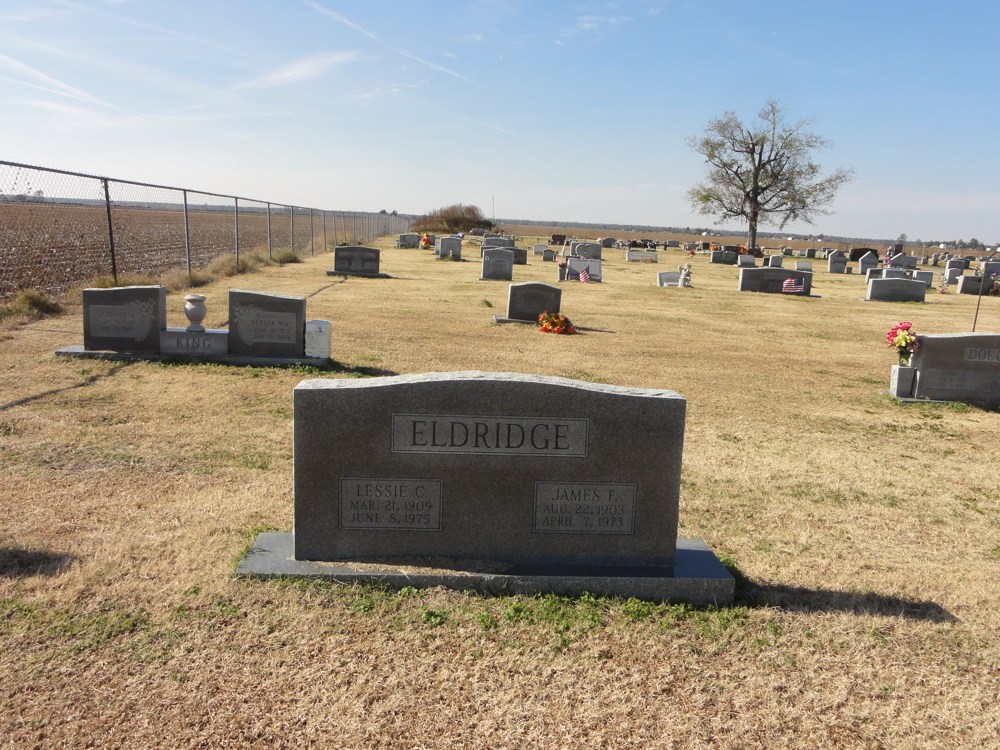 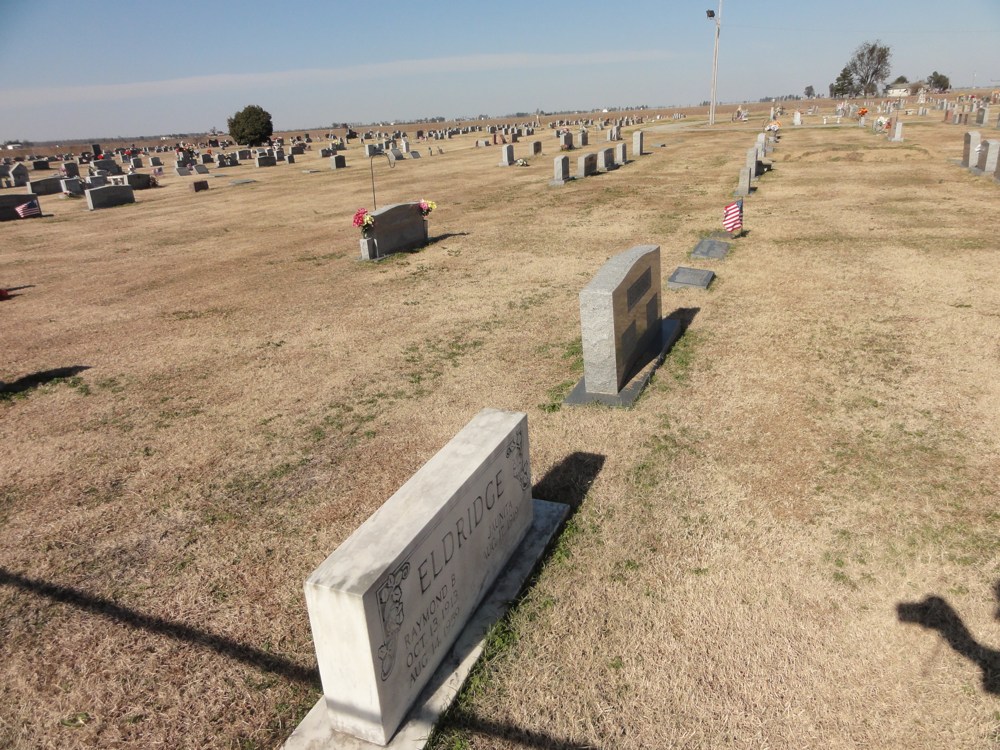 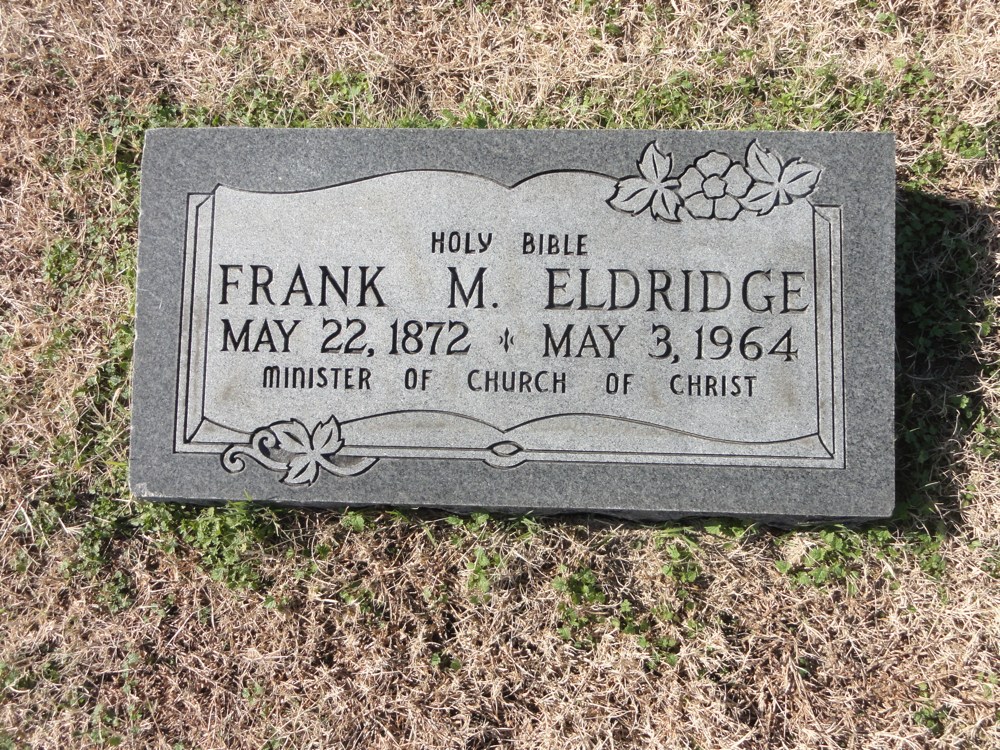