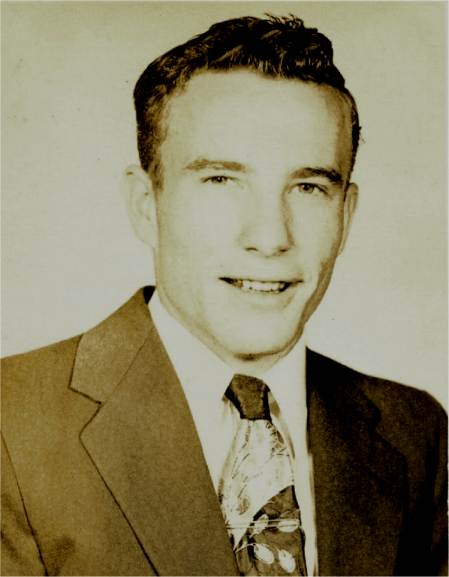 Biographical Sketch On The Life Of Sam A. Griffith

Samuel Austin Griffith was born in Vilonia, Arkansas, April 27, 1936, to Austin and Ardena McHenry Griffith. His uncle, Emmitt Griffith, who was a gospel preacher, took him to services with him often, where he learned about the gospel. He attended schools in the Liberty and Vilonia communities. He met his future wife, Clarice Boardman, in high school at the Vilonia High School. After graduating from high school, they married on December 24, 1954. After two years of worshiping with the Liberty church of Christ, near Conway, Arkansas, he was baptized into Christ at the age of 20. Although he never received college training, he had a zeal to study God's Word and share it with others. He became very involved in personal evangelism. In March 1957, he and Clarice moved to Whittier, California, where he had two sisters living, to "seek their fortune" as he put it. He and Clarice attended the Whittier church of Christ, where they became involved in the "Cottage Meetings" program. He dedicated himself to teaching the Word and baptizing those believers into Christ. During this time, he was employed with U.S. Postal Service, as a mail carrier. He loved people and brought several to Christ.

In 1959, he had an opportunity to transfer back to Arkansas with the postal system. They moved to Jacksonville, Arkansas in March, 1959. Sam and Clarice worked as a team and immediately threw themselves into work of the church. The church grew rapidly from about 125 to 500. Almost every evening cottage meetings were conducted in homes and there were weekly baptisms. He involved many members in "door knocking" to set up cottage meetings He had the desire to learn and grow and attended every lectureship and seminar that he possibly could. As a result of the growth, a new brick building was built on Bailey Street in Jacksonville. Brother LeRoy Wood was the minister. Sam was willing to make many sacrifices to preach and teach the Word. The Little Rock Air Force Base was located in Jacksonville, which made the opportunities for teaching tremendous. He had a continual training class for those interested in teaching others. Many of the military young men and families were eager to seek and save the lost and were faithful to train in methods of teaching the Word. He used many teaching tools, such as the Jule Miller filmstrips and the training of Brother Jack Exum in his book, The Glory of the Ordinary. He also became very interest in the teaching tool of Brother Ivan Stewart's, "Open Bible Study." It was successful and from that training, many transferred to other air bases and continued to teach and train. Sam took advantage of every opportunity to share the gospel and as a result, he brought dozens to Christ. He conducted many workshops all over Arkansas, training Christians in an effective way to reach others.

In 1964, Sam and Clarice started their family by adopting a daughter, Trudy Smith. Many of the brethren encouraged him to enter into formal training and become a full-time minister of evangelism. In 1971, he and Clarice had a daughter, Jill Farris.

In 1975, after struggling with the idea of leaving the postal service and going to evangelism school, they decided this was the time if they ever would. They moved to Eldon, Missouri, where Sam preached and taught for a congregation that was struggling. The attendance was about 40 and after a year of hard work and prayers the congregation reached about 100. It was in a rural area and the families were scattered about. But, the congregation was strong and sound.

In 1975, the Coleman Avenue church of Christ, in Memphis, Tennessee, where Brother Bill Simpson was preaching, asked Sam if he would come there and work to build up the congregation and after a year, attend the School of Personal Evangelism in Arlington, Texas, with the intention of coming back to Memphis to establish a school of personal evangelism. Brother Simpson referred to Sam as a "self-starter," meaning that he used what he had and with enthusiasm reached out to others with the gospel. This had been Sam's long time dream and he agreed to it. In 1978, after working a year with the congregation and training many members, he went to Arlington to attend the school that was a one year program. While at the school, he worked in 4 campaigns for Christ, where he went to several states and the islands of St. Lucia and St. Thomas in the Carribean, plus local campaigns on a weekly basis. Many were baptized into Christ as a result. In 1979 he graduated at the top of his class and went back to Memphis to establish the school. The school, which was also programmed for one year, began with 8 students. Local campaigns, were conducted in that city. Many Christians came for workshop training every Saturday throughout that year from Memphis and surrounding states.

In 1981, after two years of directing the school, because of family needs, he resigned to go back to the Little Rock area, and go back to work for the post office. The post office did not hire him back and he went to work, preaching for the Morgan congregation in North Little Rock. The attendance there was about 35. The congregation grew and an educational wing was built on to the main building and the attendance grew to about 120. While working with Morgan congregation, he had a weekly radio program for 5 years. He preached there until June, 1992.

He started preaching for a small congregation in Mayflower, near Conway, Arkansas, in the fall of 1992. It was a struggling congregation of about 30 in attendance. There were no elders and they had the desire and love to work toward building up the church and after about a year, the attendance was around 80, with several coming to Christ. Sam worked with this congregation until June, 1997. The congregation continued to grow and reached about 120. His intentions were to semi-retire from preaching and continue to teach on a one on one basis.

In the fall of 1997, he was invited to work with the Oak Grove congregation in rural North Little Rock, as a part-time preacher. The attendance, at that time, was about 35. He worked part-time as a merchandiser for several companies and preached for this congregation and saw it grow spiritually and numerically. After 3 years, he decided to again, to retire. He officially retired in June 2000, but worked to help keep the congregation growing. In September, 2004, his health began to decline. He was diagnosed with pancreatic cancer on December 31, 2004. After 8 months of surgeries and treatment, he passed away on August 29, 2004.

He was truly a "man of God." He was, also, a people person. He loved the souls of men and did everything he could save even one. He was a a very emotional man who would tear up when preaching about his Savior and try to persuade men. He spent so much time encouraging others and gave everything he had to bring them to Christ.

My husband passed away on August 29, 2004. Needless to say, I was devastated. On the day of his burial, at the cemetery, during the service, a beautiful fawn trotted up to the area where we were, within a few feet, and observed what was taking place. After a few minutes it trotted off into the woods. It was completely alone, no other deer around. This was so unusual to everyone. I didn't sleep that night and early the next morning, I made my coffee and went outside to watch the sunrise and try to find some comfort. As it became daylight a large beautiful blue butterfly flew up beside me and sat down by my chair. It sat there for the longest time, opening and shutting its wings. It gave me such a sense of peace and comfort. I just felt the presence of God. Every day for 7 days, this butterfly came and visited me, and then it was gone. After two weeks, I went out one morning, and there on the floor of the carport was a blue butterfly, its wings spread flat.

I knew it was dead. I gently picked it up and carefully put it in a frame along with a picture of my husband. It is a wonderful reminder of God's love and presence in our lives.

I had the opportunity to visit the great Mabelvale Church of Christ along with my good friend, Graham McDonald of Scotland. The church has been a supporter of his work for many years. While reporting on his work in October, 2004, I accompanied Graham on his visit to the church. The Sunday service was wonderful. After visiting with so many of the wonderful people there, we were just about to leave when one of the members, Jill Farris, introduced herself. In the course of visit she explained that her father, Brother Sam Griffith, had recently passed away. I told her that I would be honored establish a website in his honor. Since then I have been in continuous contact with Jill. She has worked greatly to collect all the material you see here on this site. We greatly appreciate the work that she has put into gathering this information to honor a truly gifting and faithful man of God.

Directions To The Grave Of Sam Griffith

North from Little Rock, Arkansas, go to Conway on I-40, and take exit 127. At the light take a right onto Hwy 64, East Oak Street. Go 5 miles to the Crestlawn Cemetery. Pull into the first driveway. Follow around to the right then to the left. Grave marker is by the walkway. 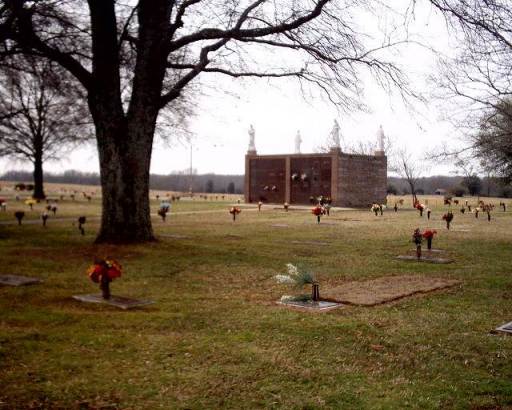 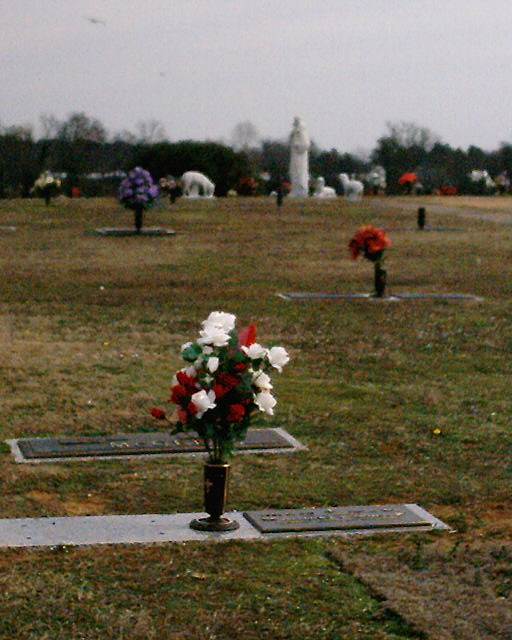 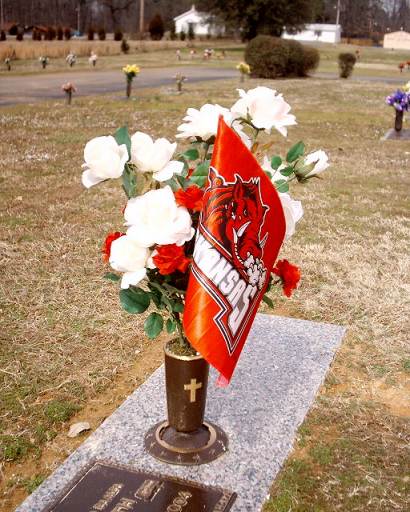 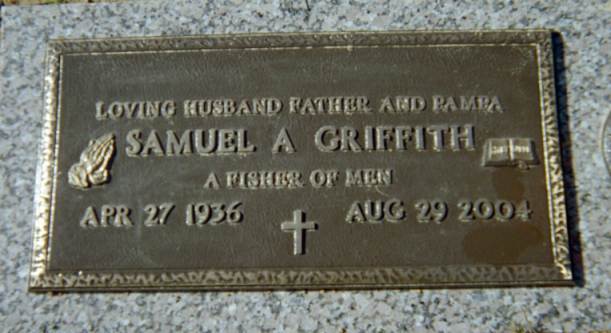