On the evening of January 1, 1938, John T. Hinds, editor of the Gospel Advocate, entered upon his rest, following almost four months of intense suffering.

At the time of going to press only the fact of his death was known here, and that the funeral services would be conducted at Roqers, Ark., Tuesday afternoon. Leon B. McQuiddy, publisher, and L. O. Sanderson, business manager, of the Gospel Advocate, left Monday for Rogers. Brother Sanderson is to conduct the funeral services.

Brother Hinds was seventy-three years old when he suffered a cerebral hemorrhage here on September 7. The strokecame upon him at the evening meal at his boardinghouse. He was not expected to live through the night, suffering sixteen convulsions, and going as long as one and a half minutes without breathing. The following morning he was removed to the Protestant Hospital, where his recovery was rather remarkable. When he left Nashville on October 12, both Brother Hinds and his family felt confident that he would be able to return within a couple of months to resume his work with the Advocate.

Later, however, he suffered a second stroke, and was for a period under treatment in the Sparks Memorial Hospital at Fort Smith, Ark. Later he was removed to Oklahoma City for treatment under a brain specialist. It is not known here whether he died at Oklahoma City or at his home. The news of his passing came from Rogers, Ark.

Brother Hinds became editor of the Advocate with the issue of April 12, 1934.

On February 23 of last year an accident occurred in Tucson, Ariz., which resulted in the death of his daughter, Miss Leta Hinds, and the serious injury of his son, Hubert Hinds, when their new home was wrecked by a gas explosion.

Brother Hinds is survived by Sister Hinds; his son, Hubert, who is head of the husbandry department of the University of Arizona; and his daughter, Mrs. Phillip Rice, of State College, Pa.

A fuller account of his passing will be given in later issues of the Advocate.

Some seventy-one years ago John T. Hinds was born. This was during the troubled reconstruction period following the Civil War. Under the most adverse circumstances and by the dint of hard labor and sacrifice he obtained an education far in advance of most of his generation. He was a product of the College of the Bible, Lexington, Ky., a pupil of J. W. McGarvey. In Bible knowledge and understanding Brother Hinds had few equals and no superiors. Among his widelyread writings are: "Christ on David's Throne," an unanswerable tract, and "Instrumental Music in the Worship." His last work, a commentary on the book of Revelation, is an outstanding work in scholarship and accuracy. Brother Hinds was a real friend to the writer and to the Bentonville congregation. When gloom was deepest and the burden heaviest with me, the calm, safe counsel of Brother Hinds came to soothe and give renewed courage. His friendship was not limited to advice. With the exception of Sister Johnson, of Fort Worth, Texas, Brother Hinds gave the largest contribution of any individual to the building of a church home here. Sister Hinds and children have our deepest sympathy in their loss. Brother Hinds laid down a full and useful life for the Lord to take up a more full and complete one with him.
-George B. Curtis., Bentonville, Ark., Gospel Advocate, March 31, 1938, page 310.

Location Of The Grave Of John T. Hinds

John T. Hinds is buried in the Evergreen Cemetery in Fayetteville, Arkansas. Heading north out of Fort Smith on I-540 go to the city of Fayetteville, home of the University Of Arkansas. Take the W.6th St. Exit and go east toward town. Just past the university turn left on S. Virginia Avenue. Take the second street to the right on S. California Blvd. Go to the third street to the left on N. University. You will see the cemetery on your left. There is an iron fence all around. There is an entrance on N. University. Turn in and go to the first street in the cemetery to the left. Now begin looking to your right as you travel about 30 meters. (The "HIGHT" marker on the left is a good place to stop. The Hinds marker is on the right though.) The Hinds monument is faced away from you so you can't tell it from the drive, but it is in the plot about four rows in. It should be easy to find. 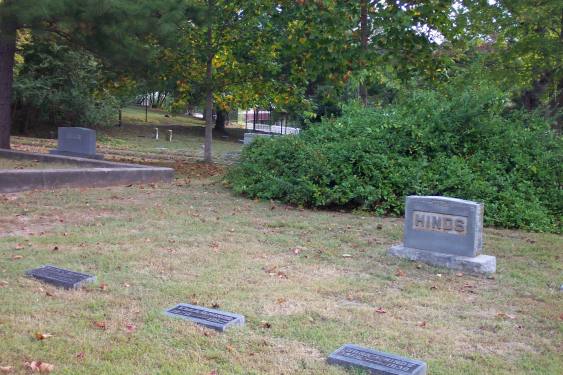 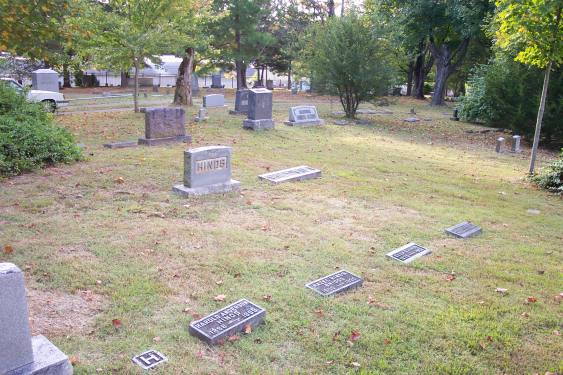 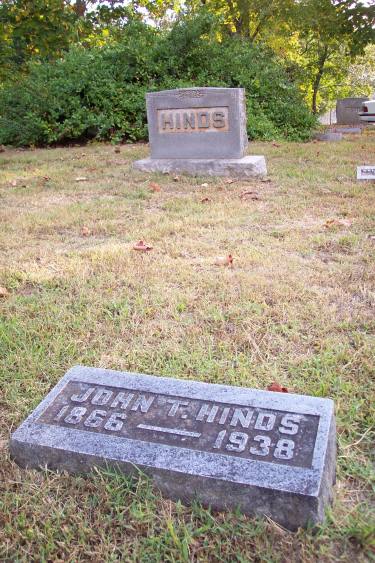 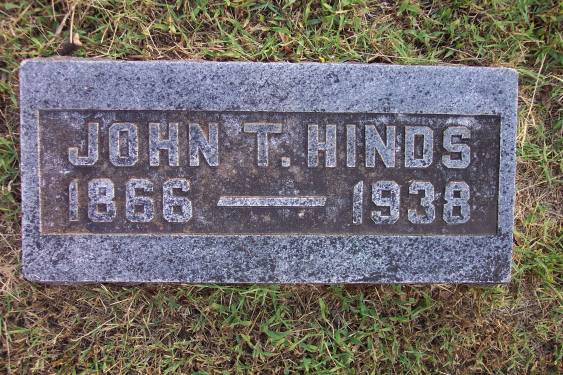