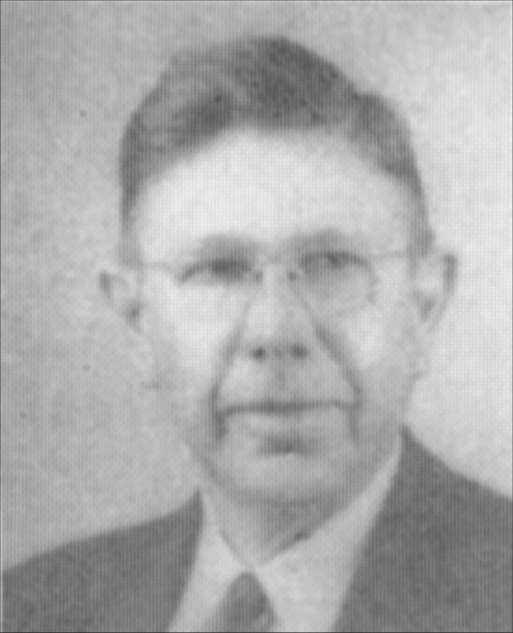 Biographical Sketch On The Life Of W. Curtis Porter

W. Curtis Porter was born in Myrtle, Mississippi, on February 26, 1897. He had lived in Monette, Arkansas from 1942 until his death. He was baptized by Jesse T. Lashlee when he was 14 years old, July, 1911. He began preaching at Mangrum, Arkansas in 1914 at the age of 17. He received formal training at Monea College, Rector, Arkansas. He preached for the Oak Park church in Sacramento, California from 1933 to 1934. He then served at the South Main Street congregation in Weatherford, Texas from 1935-1938. He was at Tenth and Rockford in Tulsa, Oklahoma from 1940-1942.

He had a great passion for writing. He wrote for a number of journals, including the Gospel Guardian and served as Associate Editor of the Christian Worker. He also wrote articles for the Firm Foundation and the Gospel Advocate.

In 1935 he wrote a book called, Divine Healing, published by the Firm Foundation. In 1947 he wrote Ask Your Preacher, released through the Cogdill Publishing Co. Later in 1952 the same publisher would release another volume he wrote called, Dissolving A Few Baptist Aspirins.

He was a unique man in many ways. He possessed great wit, a sense of humor, humility, courage, knowledge of God's Word, and one of the greatest analytical minds. He could detect the fallacy of an argument before it was completed and immediately knew how to reply effectively. Although his ability as a preacher was great, his greatest work was in the field of polemics. That is why he was called by brethren, far and near, to defend the truth against any and all error. It made no difference what the error was. In all he had 77 debates in his lifetime.

Some of his debates included: Porter-Tingley Debate on The Plan Of Salvation - 1947; Porter-Jackson Debate on Salvation and Apostasy - 1946; Porter - Canada Debate on Baptism and Miracles in 1951.

In 1942 Bro. Porter was stricken with Polycythemiavera, a rare blood disease, usually fatal within two years. Atomic isotopes were used to extend his life. He lived for another eighteen years, during which time he preached and taught the masses.

Porter believed in God, His Word, and His church. Although he possessed no gift of prophecy, it is our view that few men will be as frequently quoted in the future as will W. Curtis Porter. Through his sermons, articles, debates, and material yet unpublished, his influence will be felt for many years to come. As God said of Abel, "He, being dead, yet

Porter died in a Memphis hospital on July 5, 1960, at the age of 63 years. He was survived by his wife, Mary; three brothers, E. Lacy Porter of Benton, Illinois, Kyle Porter of Black Oak, Arkansas, and Reuben Porter of Wilmington, California. The funeral service for Porter was conducted in Monette, Arkansas, on July 7, 1960, by Paul Keller, Edgar Dye and Eugene Britnell.

July 7, 1960, was a beautiful day in Arkansas but for many who had heard of the passing of Porter it was a day of sadness as this great man was laid to rest. Brethren and friends began arriving at his home in Monette during the night, July 6, and early morning of the 7th. Many had driven from other States to be present for the funeral. Dozens marched silently and reverently by his body in the funeral home during the morning. The building could not hold all who were present for the funeral service.

Each of the three men who presided in the funeral service spoke words of praise and honor for the servant of God. Eugene Britnell spoke first by reading the obituary and closed with the appropriate statement from the "Book of God" (as Porter frequently referred to the Bible): "Know ye not that there is a prince and a great man fallen this day in Israel?" Ed Dye spoke next and worded the prayer. He read and briefly reviewed many Scriptures describing the faith, character, work and hope of Porter. Paul Keller delivered the principal address which was greatly appreciated by all who loved and appreciated W. Curtis Porter. Porter was conscious until a few hours before his death. He talked of death calmly and with great hope. He planned his funeral.

Along with Job of old, few men on earth have suffered as did Porter. For some 15 years, he had suffered from a rare blood malady, along with other complications. Surely, for him to "depart and be with Christ, is far better." He continued to schedule meetings, debates, and speaking engagements until a few days before his death. He was truly "faithful unto death."

As the sun was sinking into the West, amid the beauty and fragrance of the green grass, stately trees, and beautiful flowers of the Monette cemetery, the body of W. Curtis Porter was laid to rest and awaits the call of his Master at the last day. A beautiful double monument-with flowers, an open Bible, and the names and dates carved on it stands at the grave today. It bears an epitaph written by Porter with his personal signature carved below, which reads:

"Along the crystal river,
With angels standing by;
We long some day to wander
My ransomed wife and I. "

A man of "exceptional attainments,"(Rue Poner made this observation about Curtis Porter, the polemicist, in 1932. See: Deffenbaugh, p. 140.) W. Curtis Porter was born near Myrtle, Mississippi, Feb. 26, 1897, the second son of Benjamin and Laura Privett Porter.

His family moved to Craighead County, Arkansas, in 1898, and "Curtis" (as he was generally known) remained there most of his life. When Jesse T. Lashlee conducted a meeting at the Mangrum Church of Christ in July, 1911, fourteen year old Curtis was baptized.

His formal education was received in the public schools of Arkansas and one year was spent at MONEA College in Rector, Arkansas. Porter's education was continued and enhanced by his own diligent and systematic study of the Bible and related subjects throughout his life.

Curtis began his long preaching career in 1914 at Mangrum, at the age of seventeen. One year later he conducted his first debate with D.N. Jackson, Baptist, at Hancock near Mangrum. Porter continued to preach in the area until 1923 when he and his wife, Jessie Winstead (whom he married in April, 1917), moved to Springfield, Missouri, to work fulltime with the Johnson and Dale congregation. He had served five congregations by the time his health failed in 1942.

Curtis decided to return to Craighead County, settling in Monette. During the next eighteen years, Porter continued to preach, debate, write and battle the rare blood disease that eventually took his life, July 5, 1960. At the funeral of 63 year old W. Curtis Porter, Eugene Britnell, Ed Dye, and Paul Keller noted that this Christian soldier had written several books, contributed articles to the Christian Worker, Firm Foundation, Gospel Advocate, Bible Banner, co-edited the Gospel Guardian, participated in seventy-seven debates (several of which were published), and had preached in every state of the union.

W. Curtis Porter preached for several congregations in Randolph County and baptized many. He is remembered as one who possessed great wit, a sense of humor, humility, courage, knowledge of God's Word, and an impressive analytical mind.

The mortal coil of W. Curtis Porter was laid to rest in the Monette Cemetery, July 7. A lovely double monument - with flowers, an open Bible, and the names and dates carved on it - was erected at the grave. It bears an epitaph written by Porter with his personal signature etched below, which reads:

Along the crystal river,
With the angels standing by,
We long some day to wander
My ransomed wife and I.

Alan E. Hlghers, Memphis, Tenn., July 7: "W. Curtis Porter passed away July 5 in a quiet hour here at the Baptist Hospital in Memphis, and was burled today at Monette, Ark. He knew his condition fully and discussed It freely. He remained conscious almost to the last. Death came as a result of leukemia and a cerebral hemorrhage."

Location Of The Grave of W. Curtis Porter

W. C. Porter is buried in Monette Memorial Cemetery in Monette, Arkansas. From West Memphis, Arkansas take I-55 North to Blytheville. Take Exit 67 and go west on Highway 18 Continue through town and stay on Highway 18 to Monette. On Hwy. 18 in Monette, turn left onto Reeves Street (County Rd. 210) next to the high school and across the street from the church of Christ building and go three blocks south. Turn left on Hogan Ave. You will be passing by the cemetery on your right. Stop the car at the rear of the cemetery. The third row from the back, and second monument from the street is the grave of W. Curtis and Jessie Winstead Porter. 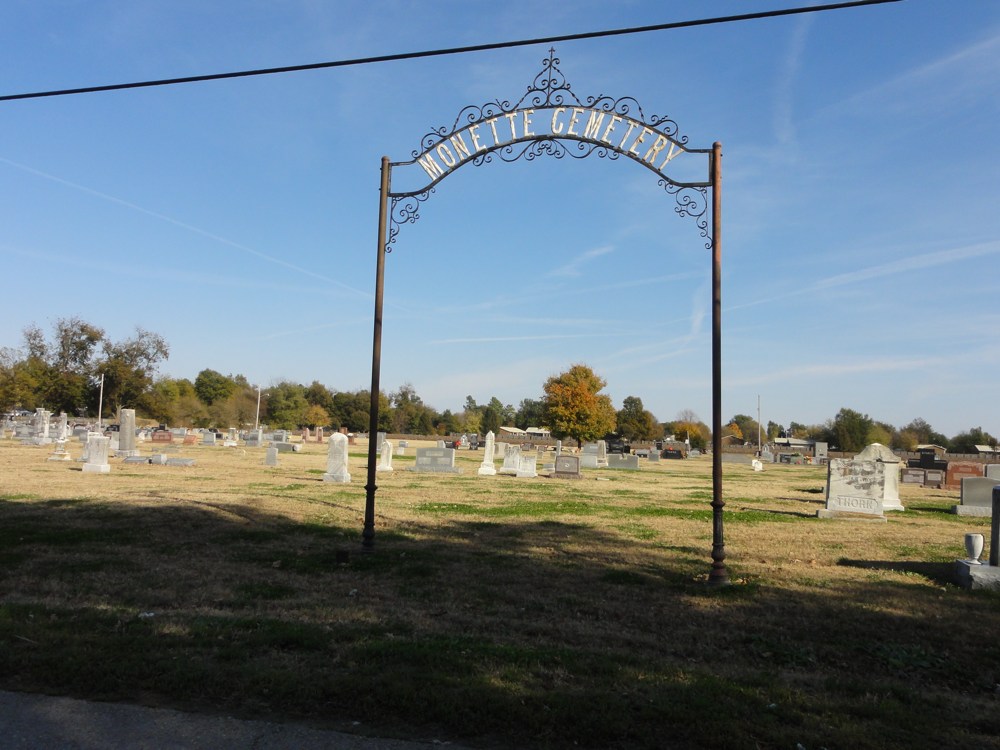 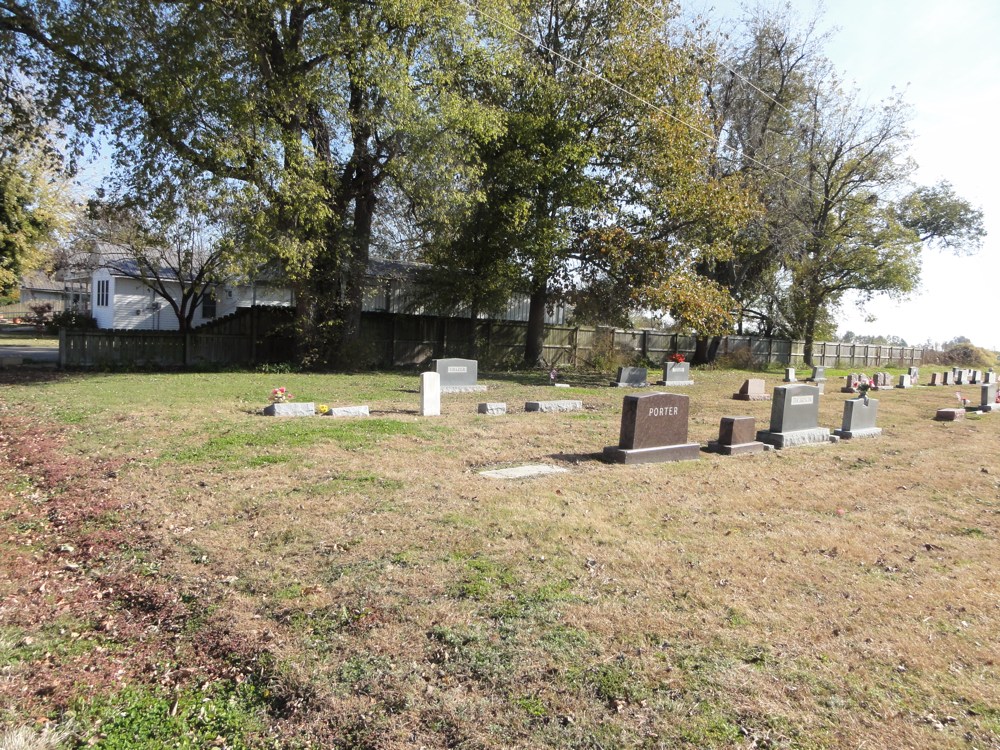 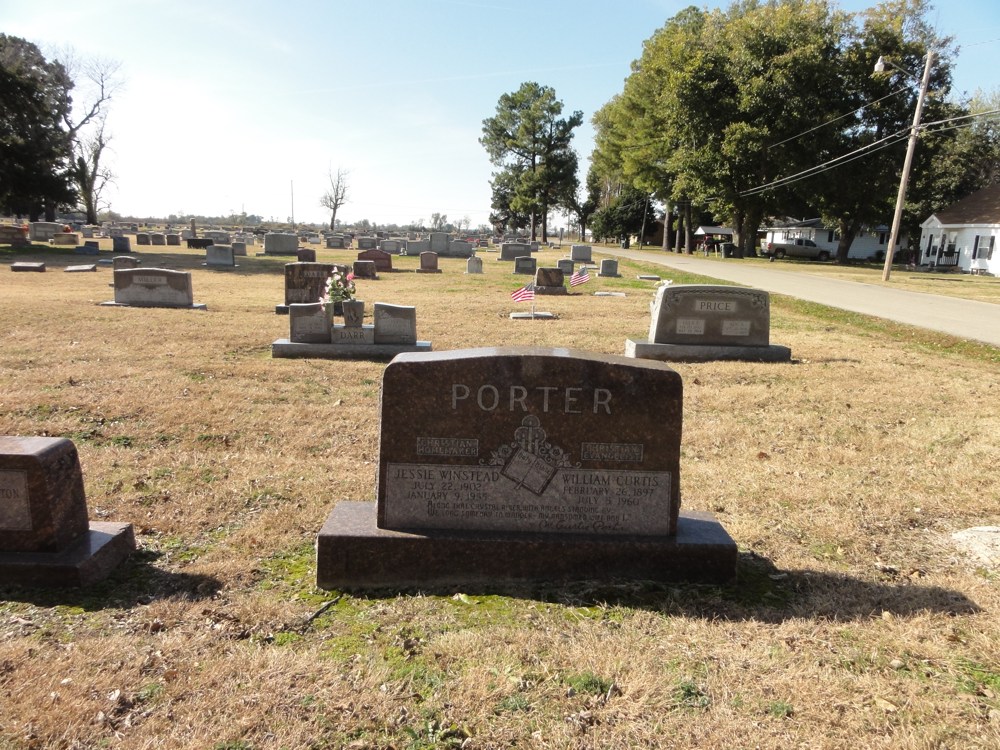 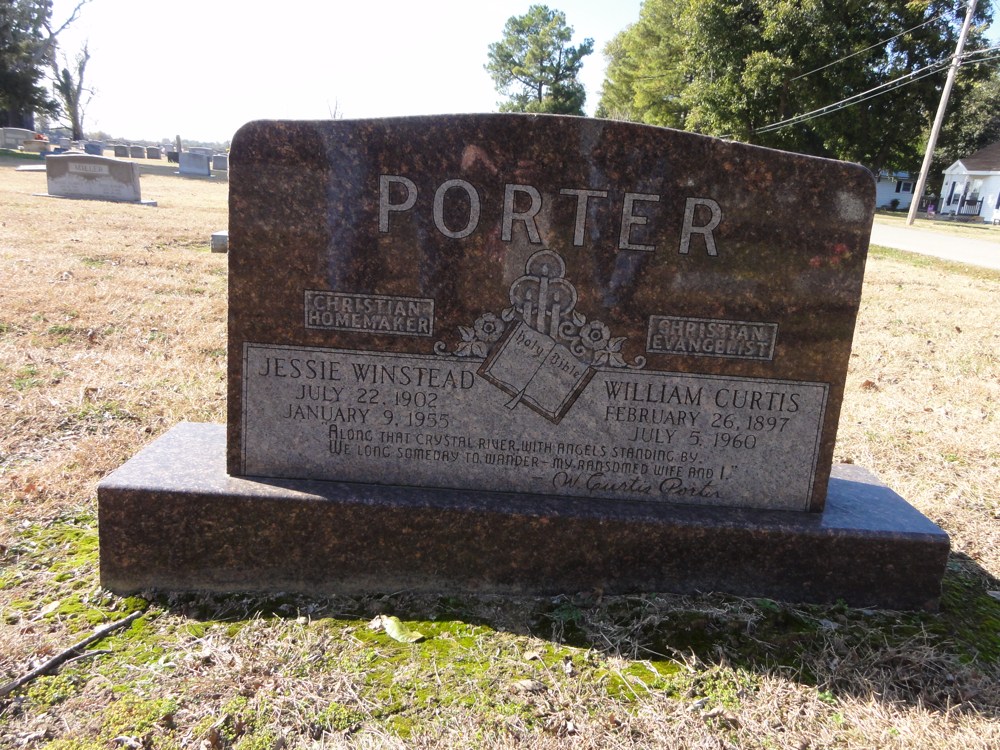