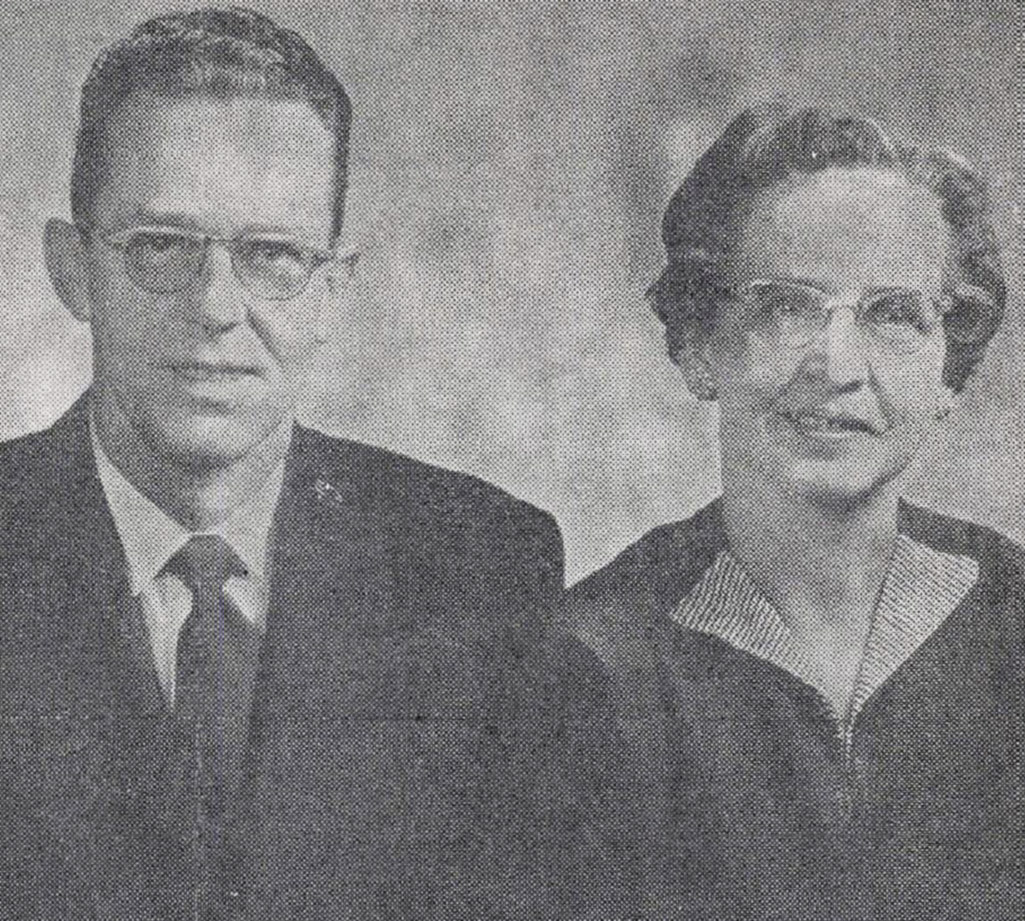 The Life and Work of Elmer Shackelford

Robert Elmer Shackelford was born the 9th of May, 1910 in Kansas City, Missouri. His parents were Robert David and Jeanette Aiken Shackelford. Some of his growing up years were in Delaware, Oklahoma and in the town of Ottawa. On the 4th of November 1931 he was married to Iona Lenore Davis. They had two children, a daughter, Doris Jane, and one son, Robert Don. Elmer spent part of his growing up years in the church at Miami, Oklahoma. At a young age he determined to preach the gospel of Jesus, and preached some of his first sermons for his home congregation. In future years, he would always be a favorite-son for the congregation there.

Brother Shackelford preached for a time for the church in Gage, Oklahoma. In October 1946, after preaching for his home church in Miami, the family moved to Leedey, Oklahoma to work with the church in 1946. In 1947, the Shackelfords and many of the members at Leedey suffered total losses due to a tornado that came through that region. (GA, 06.12.1947, p.413-reports below). He reported to have lost everything in the storm.

In June 1954 he began preaching for the Fifth and Oklahoma congregation in Woodward, Oklahoma. In the summer of 1957, Elmer made a preaching trip to the island of Oahu, Hawaii, where he preached for, at that time, all five congregations on the island. In a report sent to the Gospel Advocate, he spoke of the congregations needing located workers. (GA, 09.26.1957, p.621). In 1962, the Shackelford family answered that call by moving to Oahu Island, Hawaii, where they began working with the Wahiawa congregation. A relatively new work, the main focus was to evangelize on nearby military bases as well as among the local cultures. At the end of 1966, the Shackelfords departed for the mainland, moving back to Oklahoma, where Elmer began preaching for the church in Wagoner. The three-year work in Hawaii had produced sixty-three baptisms, and eighty-four restorations, as well as helping to settle the work at Wahiawa. After six years, it was to Seneca, Oklahoma the family went to begin working with the church there.

In 1964, Iona wrote a small book entitled, "Illustrated Bible Stories" that presented "sound Bible teaching from both the Old and New Testament stories." (FF, 10.14.1986, p.29[621]) It was released through Gospel Teacher Publications.

As mentioned above, Elmer and Iona Shackelford were the proud parents of two children. Their son, Don, was a well-known and beloved missionary, educator, and preacher.

In his lifetime, brother Elmer Shackelford conducted meetings in Oklahoma, Texas, Kansas, Missouri, Tennessee, Alabama, Colorado, Hawaii, California, and Arkansas. The last years of Don and Iona's lives were spent in Searcy, Arkansas. And, on the 12th of June 1989 Don passed from this life. Burial followed at Oaklawn Memorial Gardens in that city to await the coming of the Lord. Iona lived another seven years before passing on the 3rd of July, 1996. She was buried beside her husband. The Shackelfords are buried among many great heros of the Restoration Movement in Arkansas history.

-Scott Harp. 11.12.2019
Sources: Gleanings from reports sent in to Firm Foundation and Gospel Advocate, Ancestry.com, among a few other sources. 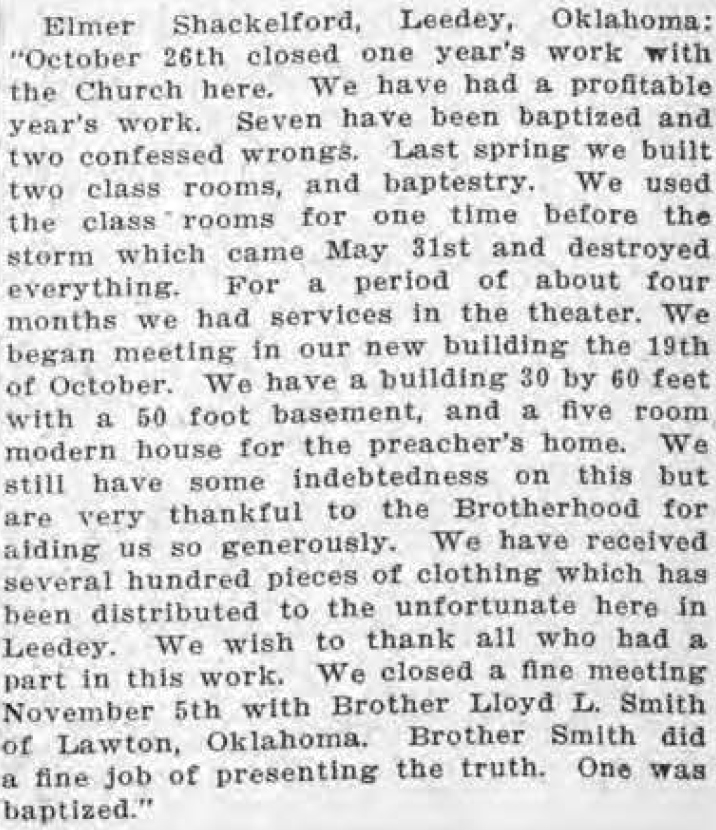 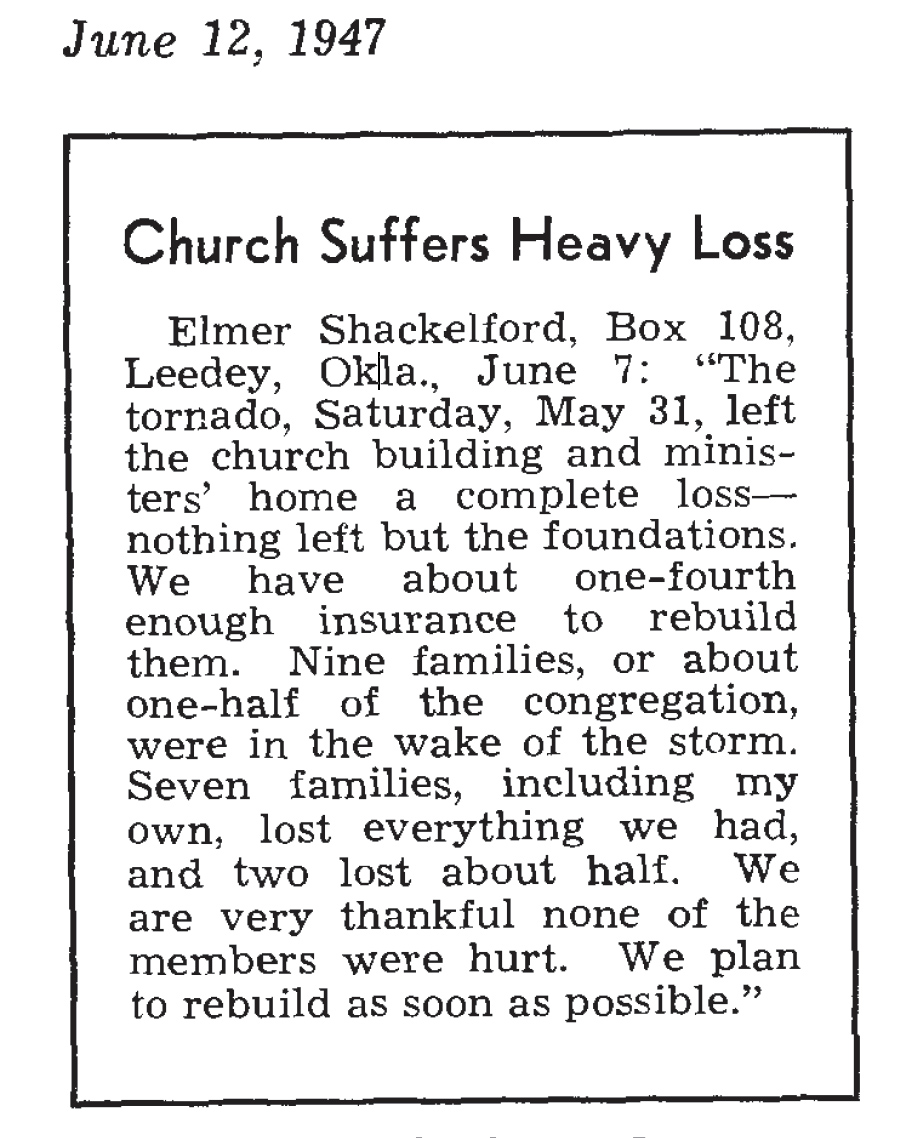 Oak Grove Cemetery in Searcy, Arkansas. Oak Grove is the oldest cemetery in Searcy and is located in the north central part, near downtown. If looking at a map, the location is on E. Moore. If traveling from Main Street turn north on N. Horton and it will dead end into E. Moore with the cemetery straight ahead. At the rear of the cemetery you will enter the new section of the cemetery called Oaklawn Memorial Gardens. The Shackelford plot is in the first section on your right. 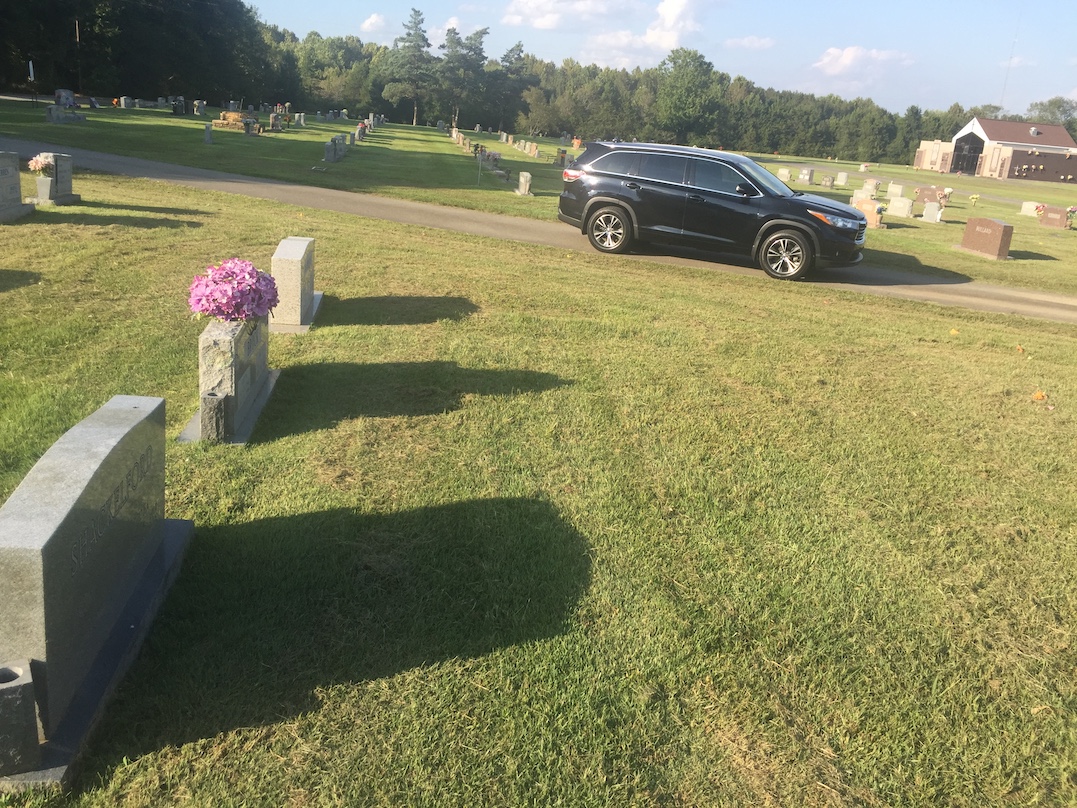 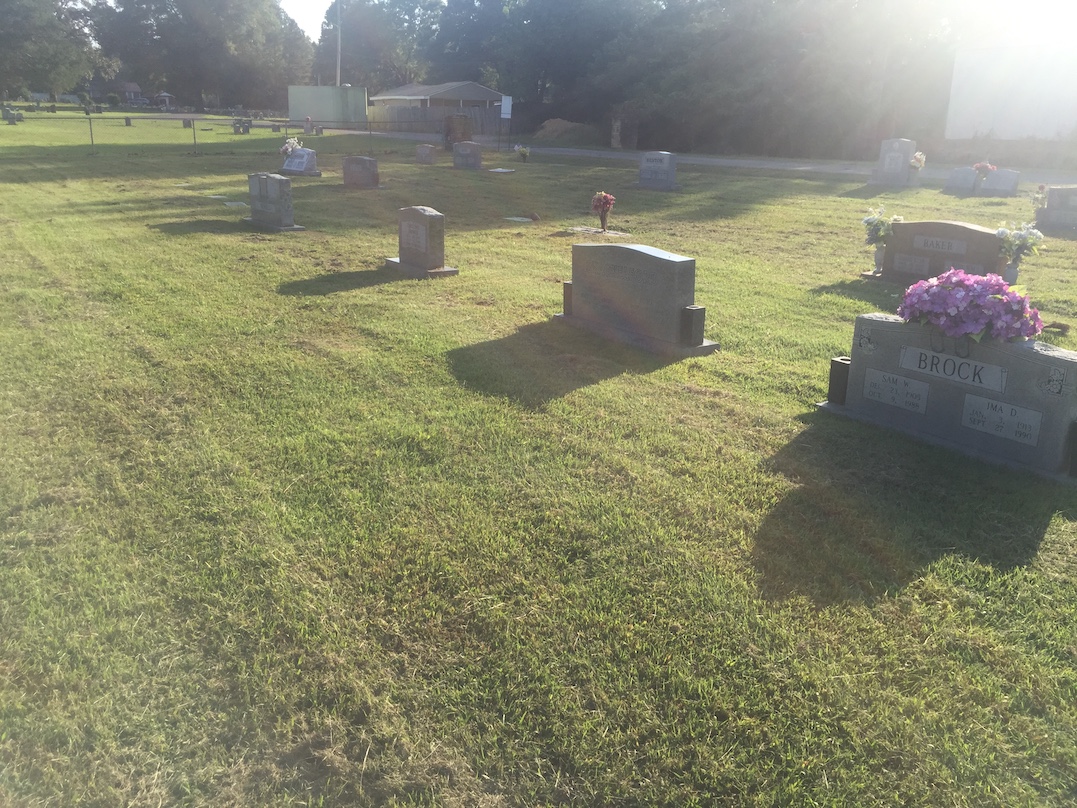 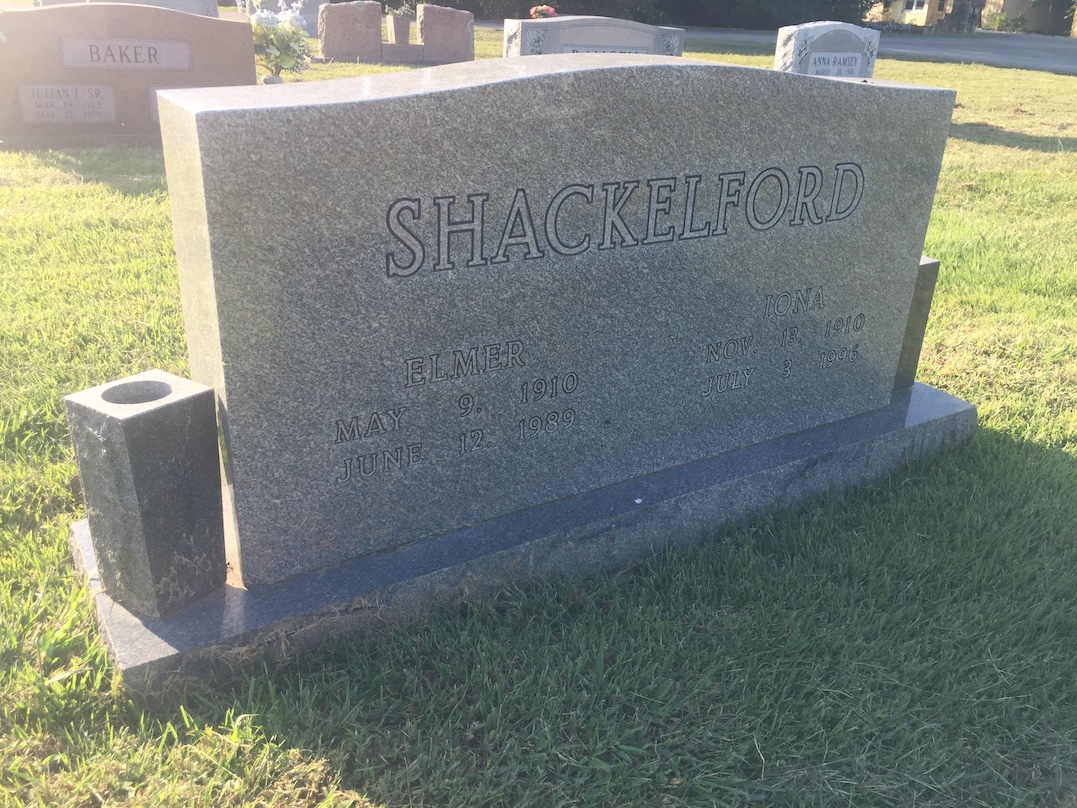 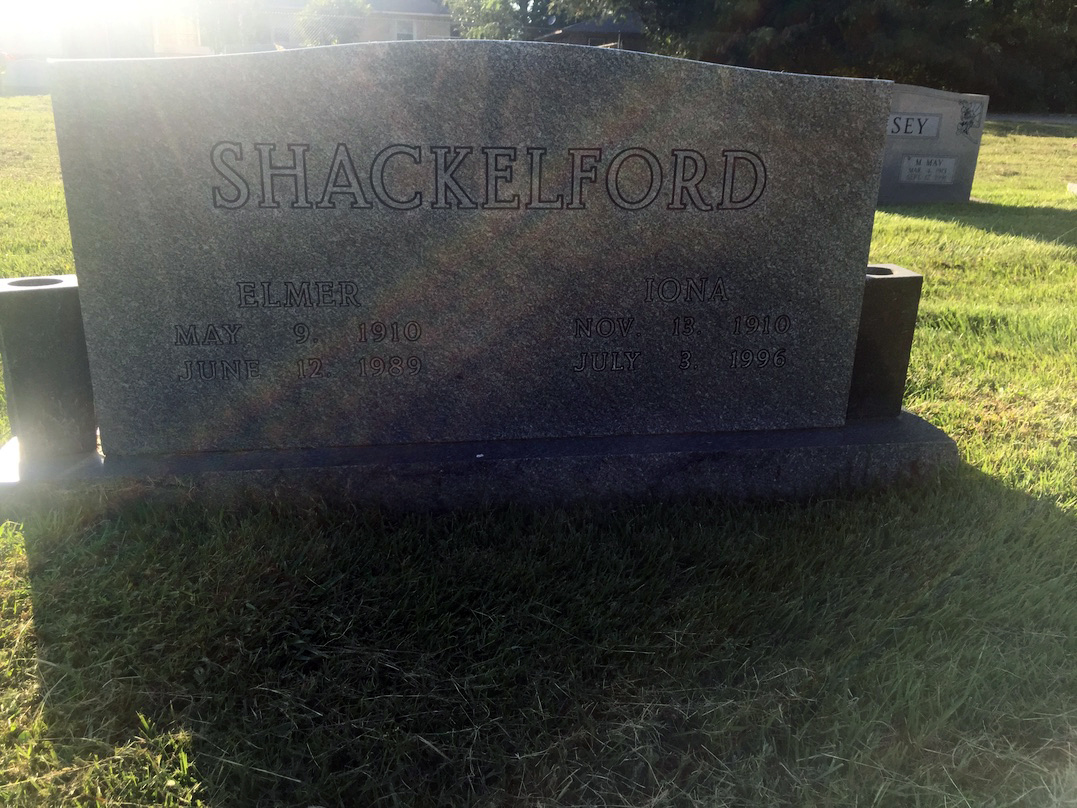