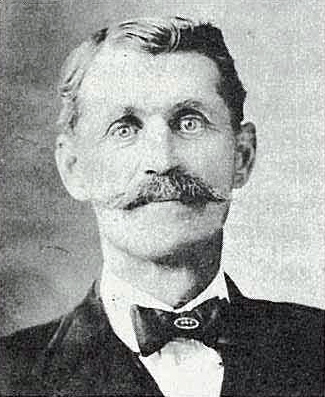 To properly know the story of these old pioneer ministers of the Word, the reader somehow must be made to know that they, each and everyone, were individualists. They were not cut to form, nor shaped to a strict pattern of conformity. They were not 'run-of-the-mill' products. These men found faith and convictions by a careful, meticulous study of the will of God as He revealed it in His word. I am happy to count this preacher as a dear friend, and was honored to know that when he closed his long life at the age of 92, that he had chosen me to deliver the memorial address at his funeral service conducted at the Fisher Street Church of Christ, Jonesboro, Arkansas, where he lived and attended for so long.

Known to his intimate friends as “Frank,” Brother Strickland  was christened Francis Marion at his birth September 16, 1864 at Pilot Knob, Missouri, a town near Ironton. Most of his education was obtained reading McGuffey's Reader while riding a log wagon behind a yoke of oxen he drove. He probably attended school for 6 or 8 months altogether in his life. During these few months he completed the fourth grade. This is not to say that he had no education, for he educated himself and won a prominent position among his contemporaries as one letter I will give will show.

Probably no other preacher ever experienced a greater struggle in his conversion. As soon as he learned to read, the Bible became his favorite book. Affiliated with no religious group, he found someone to baptize him but joined nothing. His baptism, he was to learn, was not Bible baptism. He left Missouri and came to Arkansas soon after he was twenty. In Jackson County he met and married Mollie Covey Foster. The marriage was at Old Jacksonport, Arkansas, June 9, 1887.

His first credentials as a minister of the Gospel were recorded in Jackson County and are dated August 17, 1895. They are recorded in Book A, page 30. He began preaching when around thirty years of age. Because of his lack of religious affiliation, his wife, a Methodist, did not respect his preaching, and allowed their small daughter to run over the rostrum, pull at his leg and in general be a nuisance to him while preaching. He had been preaching for two to three years when two gospel preachers, whose names I do not know, heard him and began to teach him the 'way of the Lord more perfectly.' The big problem to him was that Ephesians 4:4 taught one baptism, and if he was baptized again that would be two, and he believed it would be unscriptural. One night one of the gospel preachers went home with him, and stayed until midnight and convinced Bro. Strickland that his previous immersion was not Bible baptism at all, and that he would have to have Bible baptism to have the one baptism. The next morning they broke the ice, literally, as it was winter and Bro. Strickland was baptized. His wife, who had listened in, demanded and received baptism at the water. This was early in 1898. Among his effects kept by his daughter, Mrs. Jim Stevenson of Doniphan, Missouri is a paper dated June 12, 1898 of which enough is legible to determine that it is a recommendation from a local church of Christ as a minister of the gospel. This may have been new credentials as a preacher. At any rate he began preaching the gospel of Christ.

Meeting Brother E.M. Borden and conversing with him he found that they differed on three doctrinal issues. I regret that I do not know what they were. The two preachers met in friendly debate to try their understanding on the polemic platform. The discussion resulted in Brother Strickland giving up two of the issues and Brother Borden giving up one. Thus, both became more firmly grounded in 'the Faith'.

The Stricklands, moved to the coal fields of Huntington, Arkansas and both engaged in secular work. Sister Strickland kept boarders and allowed Bro. Strickland more freedom to preach. He worked in the coal mines until he obtained enough money to buy a tent for evangelistic purposes. But in 1908, after 21 years together she answered the call all must heed and passed away. Brothel" Strickland later married Lilly Wiseman at Hamman, Arkansas but they were permitted to live together only a short time as she died in 1914.

To F. M. Strickland goes the honor of establishing the church in Searcy, Arkansas. About 1912, with no members in Searcy at all, but with the help of a young brother named Honeycutt, who went with him and conducted the song services, they pitched the tent and began a series of meetings. The first night was spent at a hotel. An old couple who were present the first night commented, "That's just like we heard it." The second night they asked the preacher and singer home with them and commented again and again that the preaching was just like they had heard when they were young. They thought they had joined the Campbellites, however Bro. Strickland taught and restored them and baptized five others. One of those baptized owned a vacant store building, and donated it for a meeting house and the meeting closed leaving Searcy with a New Testament church of seven members and a meeting house.

In February of 1921, he married Ella Frakes who died only three years before him. I have visited their home many times and learned much from Brother Strickland. He taught me one of my most prized lessons on true fore-ordination and predestination. The visits were to my continuous profit.

Brother Strickland was a great debator. In the early 1920's, he met Ben M. Bogard at Lorado, Arkansas. At the close of the debate he challenged Mr. Bogard for another to be held at Jonesboro. Mr. Bogard refused. An old undated portion of a copy of the Firm Foundation carries this story about another debate.

"The Strickland and Baldwin debate is a thing of the past. It began March 5 at Center, Arkansas. Baldwin gave down in six and one-half days of the fourteen. Elder Strickland preached at the evening session. The Christian people claim a grand victory over the Latter Day Saints, Elder Strickland says he will meet any Latter Day Saints in debate, as he believes their claims are unfounded." The debate was actually at Flatwoods church in 1908.

Many years ago Brother Johnny Miller of Palataka, Arkansas told me a story of Bro. Strickland calling on a brother who had quit to try to restore him. Bro. Strickland asked him why he had quit. The man's answer amused the preacher very much. He told him that he hadn't quit for forever; that he thought that he'd "just tooken" out for a while.

Living at Steele, Missouri for a while he preached at the Bayour congregation about three miles out of Steele, and found the church divided on the question of women speaking up at all during classes. He settled the issue by announcing. "Now tonight we are going to have singing by the men only."

The last several years of his life he was in poor health. His health first failed in the mid 1920's and he went to Biloxi, Mississippi, for his health and finding no church there, set about establishing one. He succeeded and in 1927 established the first church in Biloxi in the old Civil War Veterans' Building.

I heard him preach just after his 80th birthday. Ill health necessitated him sitting in a chair to preach but he spoke for an hour. He spoke several more times after then, I am told. After his wife's death in 1954 he went to live with his daughter at Doniphan, Missouri, where at the age of 92 on March 2, 1957 he was wafted away to Abraham's bosom for the rest from his labors promised the faithful dead. His body was returned to his old Arkansas home and interred in Enterprise Cemetery near Jonesboro, Arkansas.

To indicate to the reader the position of respect afforded Bro. Strickland among his preaching brethren the following letter is pictured as he received it from that great debater, Brother Joe S. Warlick. This letter is now a treasured relic in the historical archives of Crowley's Ridge College, being presented by Sister Jim Stevenson. Brother Warlick died three months after this letter was written.

I have often thought of you and of your affliction and am trusting even still that you in a way recovered and have had less suffering than you contemplated having when I saw you last.

I have been wondering too., if you feel that you can spare that Greek Concordance you had when I was there; if you have no further use for it and will send it to me, I shall be glad to remit to you in money what may be required to parcel post it to me, and then send to you, prepaid, more than its value in books which I believe you will use more and which may be of better use and more comfort to you. I really need the book at this time, having on hand a debate with a Baptist which will make the book a great convenience to me.

I shall ever be thankful to you for the book and shall remember to give you credit, with me, for the good I make of it to the Master's cause.

I hope you and yours are contented and happy. Kindly remember me to all who may ask about me. Most Fraternally,

H.C. Green, 729 Avenue C, Port Neches, Texas, November 4: "From September 25- 0ctober 5 I was with N. G. Murphy and the church in Doniphan, Mo., in a meeting. Eight were baptized. Four were baptized and one restored on the following Lord's day. While in this meeting I met F. M. Strickland, who is bedfast in the home of his granddaughter. Brother Strickland was born September 16, 1863. His mind is still very keen, and his voice strong and steady. He has spent most of his long lite in preaching and debating in Arkansas, Missouri, Oklahoma, Mississippi, Texas, New Mexico, and Colorado. He was instrumental in establishing the church at Searcy, Ark., in 1914, and at Gulfport, Miss., and Long Beach, Miss., in 1928. He has been a contributor to such periodicals as the GOSPEL ADVOCATE, the Firm Foundation, the Christian Pilot, and others. He would appreciate hearing from those who remember him and his work, especially those of earlier years of his labors. Write him in care of Mrs. Warren Carman, Route 1, Doniphan, Mo."

Directions To The Grave of F. M. Strickland

F. M. and Ellen Strickland are buried in the old Enterprise Cemetery near Jonesboro, Arkansas. From Memphis, Tennessee travel north on I-55 to Hwy. 63. Head NE on Hwy. 63 for 48 miles. Take Exit 49, Dan Ave. and turn right. Then, turn left on CR333/Hasbrook Rd. Go 1.6 miles and turn right on CR348/Craighead Rd. Go .4 miles and the Enterprise Baptist church and Cemetery will be on your left. Enter the cemetery behind the building. Follow the ridge of the church toward the rear of the cemetery. In a row of graves in front of a tree you will find the Strickland family plot. 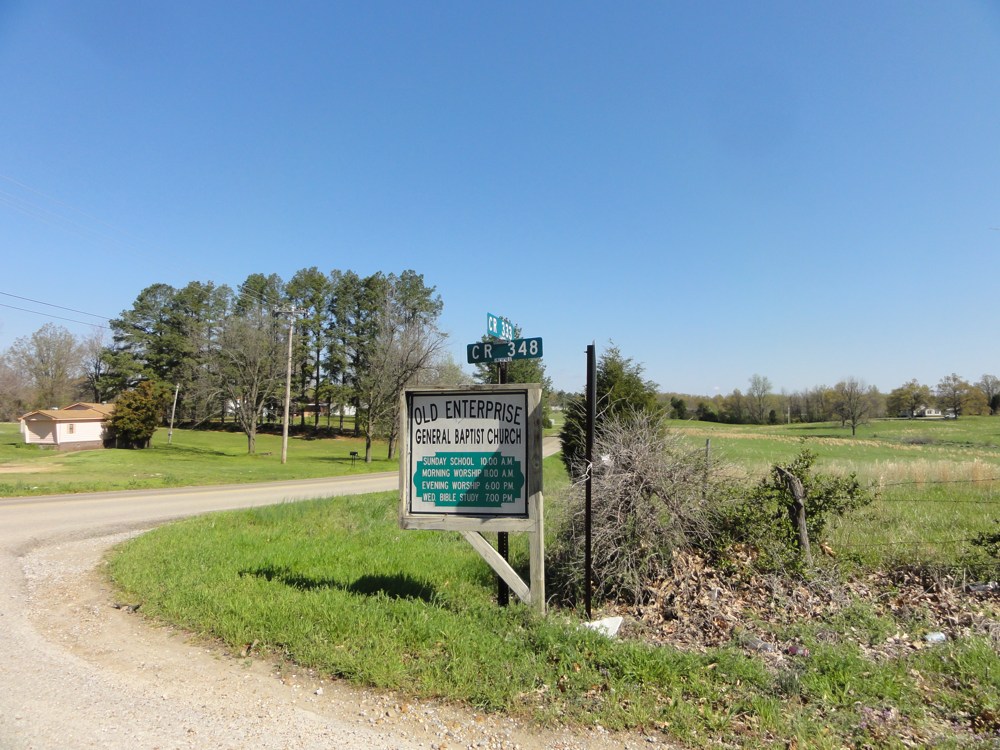 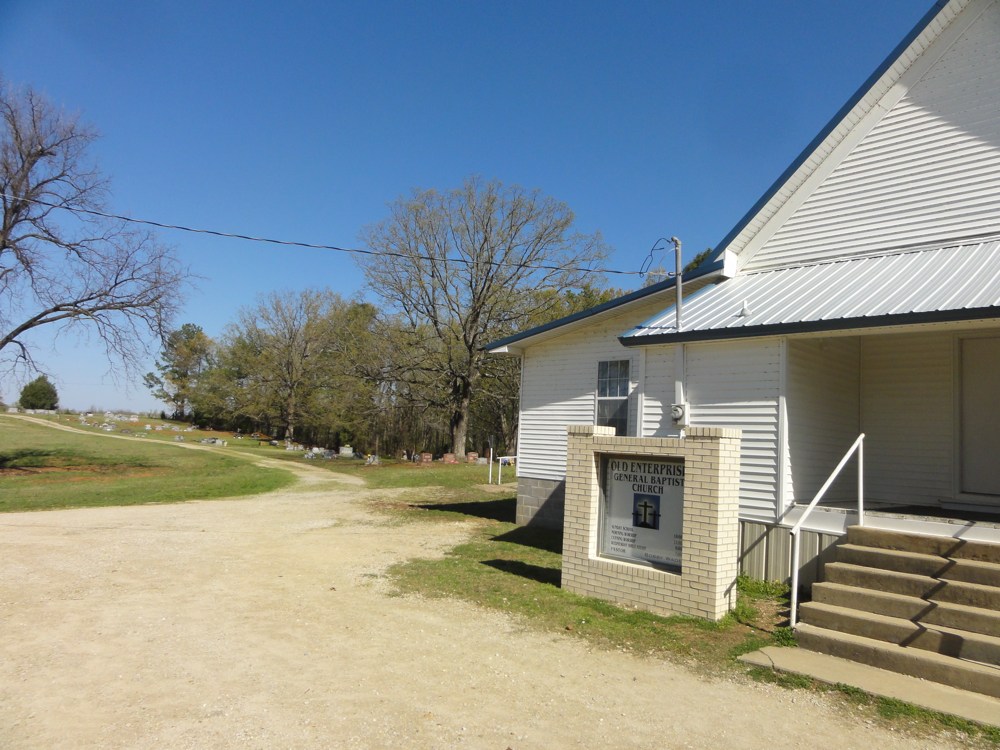 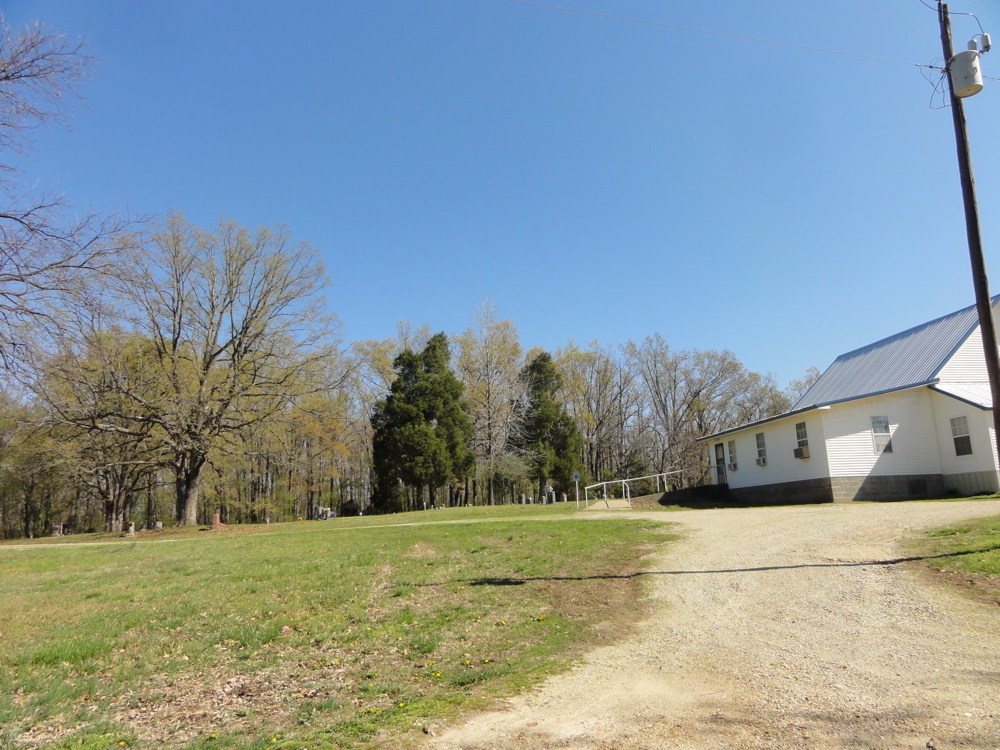 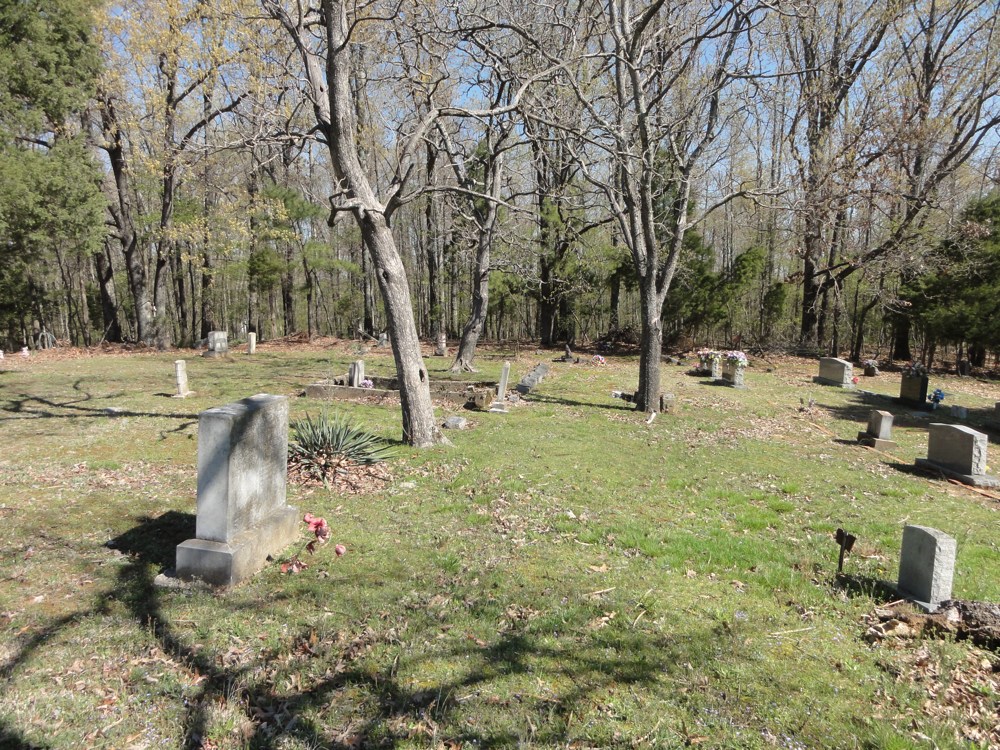 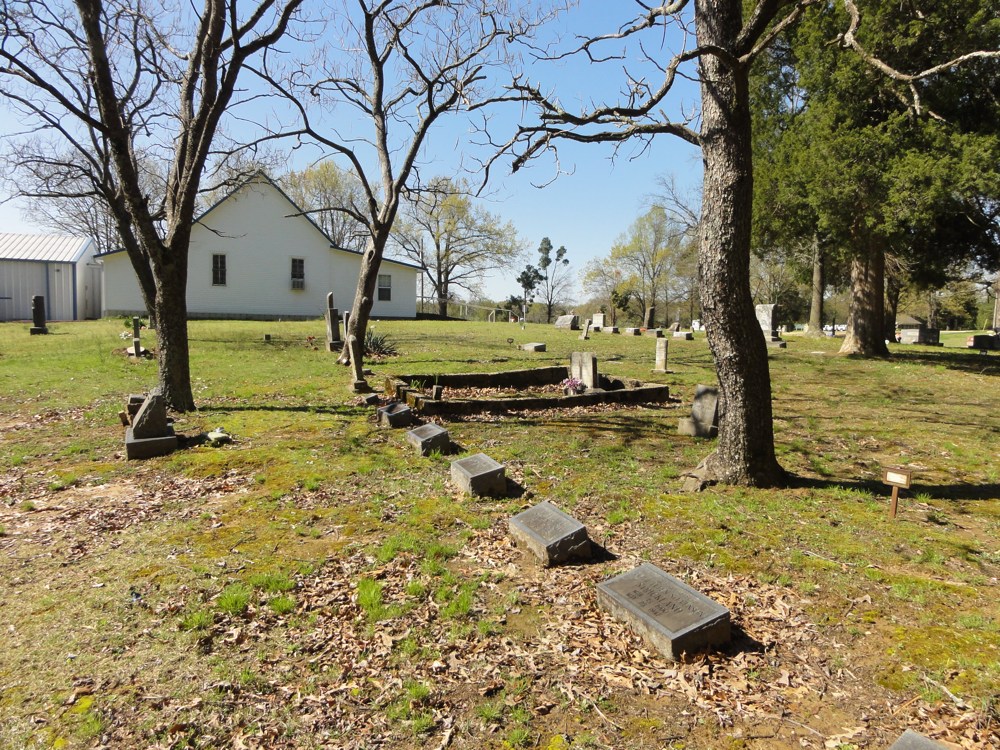 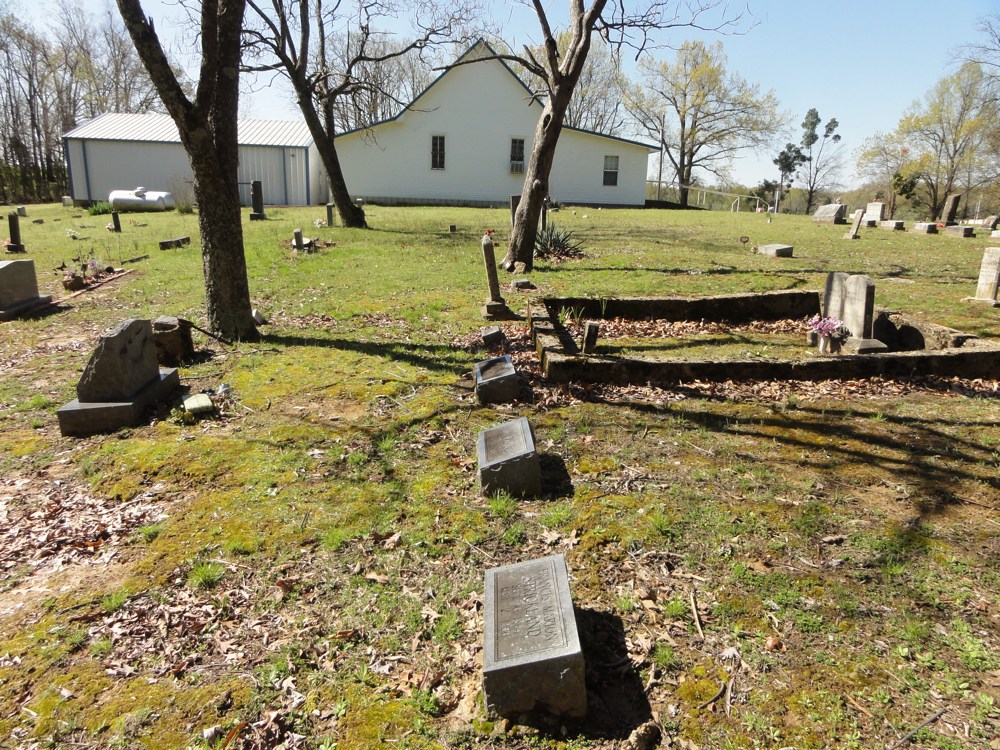 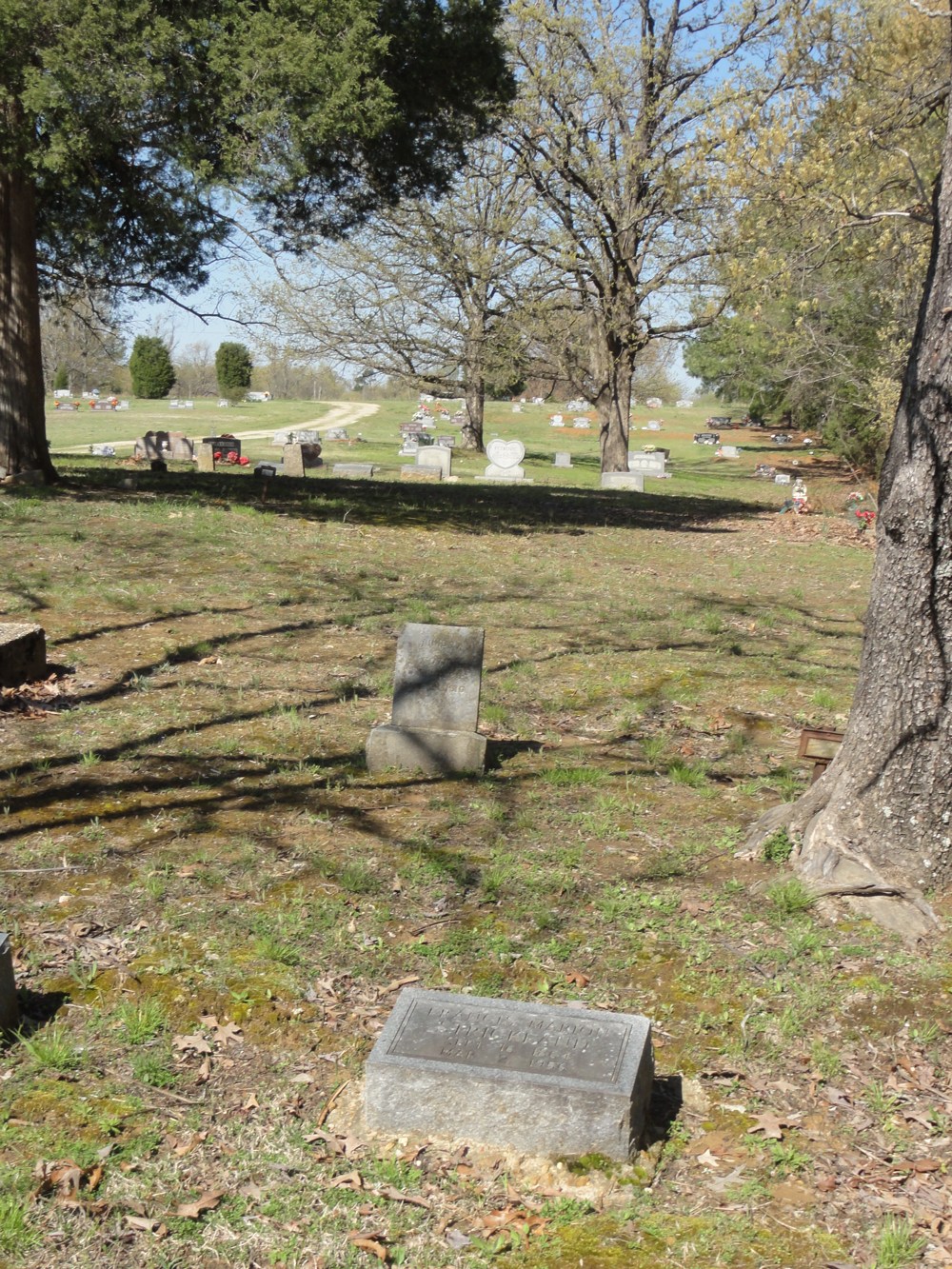 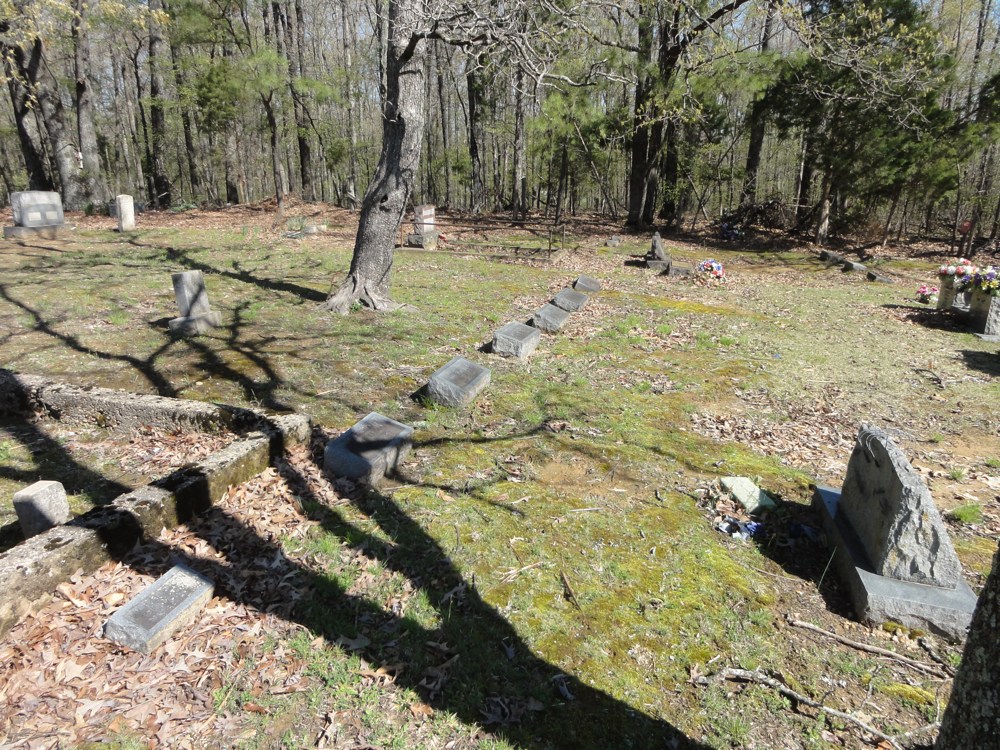 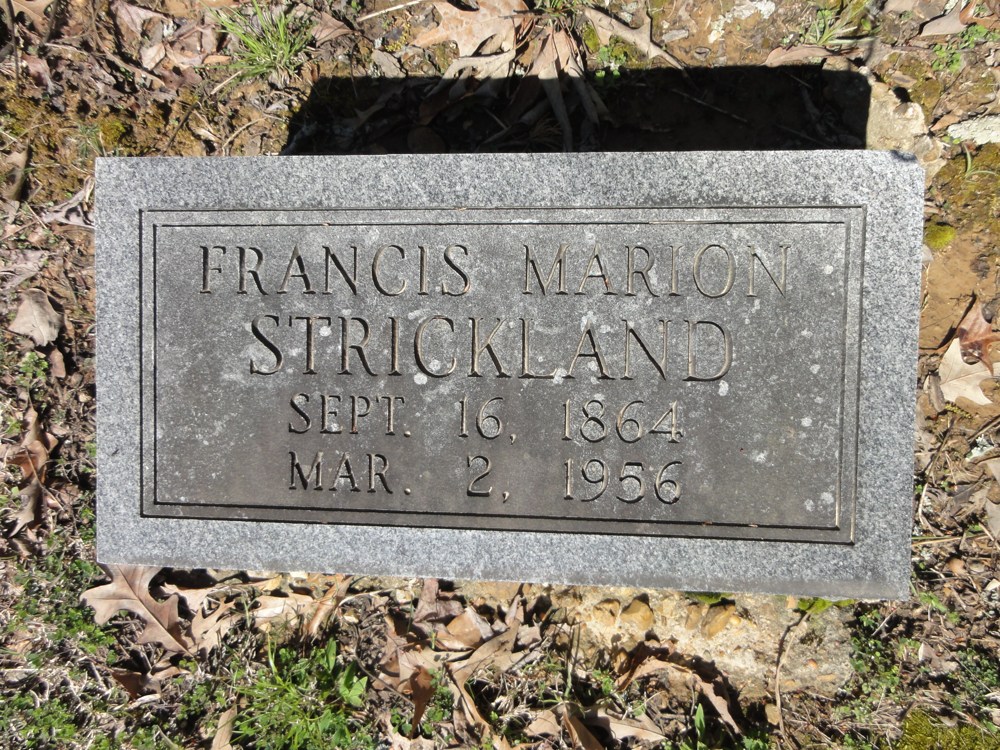