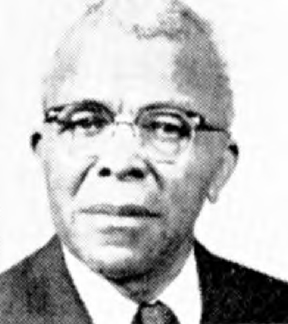 The Life Of A.L. Cassius

Amos Lincoln Cassius was born December 18, 1890 in the state of Iowa. He was the son of the great African American preacher and missionary, Samuel Robert Cassius*. He was baptized by a brother Weeks in 1910. He was married to Beulah Middleton in 1914.

A.L. Cassius began preaching in the city of Los Angeles, California in 1932. He attended Tuskegee Institute in Tuskegee, Alabama. For many years he served the church at 9512 Compton Avenue in Los Angeles. He conducted gospel meetings in Arizona, Oklahoma, Texas and New Mexico. He was a capable writer, contributing to the Southwest Advocates paper.

He helped to build three church houses in California, four church buildings in Oklahoma, and one in Arizona. He also helped in reconditioning other buildings for the purpose of housing the brethren.

Brother Cassius passed from this life in 1982 and is buried in the Lincoln Memorial Park Cemetery in Carson, Los Angeles County, California. Sadly, his grave has no grave marker. Such a great soldier of Christ, and servant among African American brethren should never be forgotten. Hopefully, someone or group of people will provide a marker for his grave someday.

A.L. Cassius: The Dean Of The West Coast

In recognition of his long years of faithful service to the cause of Christ, Pepperdine University recently conferred upon A.L. Cassius the Distinguished Diploma of Honor. The setting for this special event was a preacher's luncheon which conveners monthly on the Malibu campus.

Amos Lincoln Cassius was born in Sigourney, Iowa on December 18, 1889. His father, Samuel Robert Cassius*, was a well known gospel preacher who did most of his peaching in Illinois, Iowa, Oklahoma and Colorado. As a small child, S.R. Cassius* was privileged to visit the White House where he shook hands with President Abraham Lincoln.

A.L. Cassius grew up around Luther, Oklahoma. In 1908 he journeyed to Alabama to enroll at Tuskegee Institute. Booker T. Washington, the noted American educator, has been the president of Tuskegee Institute since its found in 1880. A.L. Cassius was pleased to be given a campus job at the president's house. In addition to this close association with Booker T. Washington, young Cassius had the unique privilege of studying under Dr. George Washington Carver, the famed agricultural chemist.

Although he attended Tuskegee Institute for nearly four years, A.L. Cassius did not received his diploma. Insufficient funds force him to drop out of school just one semester before graduation. (It was this unfortunate development which prompted Pepperdine University to award the deserving candidate an honorary diploma seventy-one years later.)

A.L. Cassius returned to Luther, Oklahoma in 1910 and obeyed the gospel there. He was baptized into Christ by a brother Weeks, but he had not yet decided to give all of his time to preaching the gospel. He devoted the next few years to developing his skills as a chef cook, and he served in this capacity in large hotels in Chicago, Dallas and Houston. He married Beulah Middleton, a member of the church of Christ in Mineral Wells, Texas, in 1914.

When the Cassiuses moved to Los Angeles in 1919, there was only one black church of Christ in the entire state of California. This was the congregation which had been established in Oakland through the pioneering efforts of a black evangelist named D.C. Allen. (By way of comparison, there are 56 congregations in the state with predominately black memberships.)

In 1922 A.L. Cassius, along with his wife and a few others, established the first church of Christ among blacks in Southern California. They met in the Watts area in the home of James Arnold, an ex-slave from Arkansas. The congregation eventually moved into a church building that was built by A.L. Cassius on 109th Street and Compton Avenue. By this time, brother Cassius had become a general contractor and was buying and selling real estate.

The growth of the Compton Avenue church led to the establishment of the 137th and Avalon church in 1957. The Compton Avenue church contributed two elders, two deacons, about 25 other members, and their preacher, A.L. Cassius, to the new work. Through the years, brother Cassius built church building in Statesville, South Carolina; Del Rey Beach, Florida; Clearview, Okmulgee, Wewoka and Tulsa, Oklahoma; Barstow and Riverside, California; Hobbs, New Mexico; and Nassau and Long Island in the Bahamas.

In addition to the Compton and Avalon churches, A.L. Cassius was instrumental in encouraging the establishing of several other churches of Christ in Los Angeles. Among these were: the 110th and Wilmington church in 1937 (now located on Figueroa Street); the West Adams Boulevard church in 1955; and the 64th and Normandie church in 1963. He also personally established congregations in Bakersfield and Riverside, California; Hobbs, New Mexico; El Paso, Texas; Phoenix, Chandler and Tucson, Arizona; and Denver, Colorado. Brother Cassius preached in 15 states and was a missionary in the Bahamas Islands for five years. In the mid 1960's he made four missionary trips to Jamaica.

This brief sketch of the life of A.L. Cassius would be incomplete without mentioning his unwavering support of Christian education across the years. He attended some of the first meetings in 1936 which resulted in the founding of George Pepperdine College in 1937. In recognition of his services to the college, Pepperdine gave him the Founder's Award in 1959 and the Christian Service Award in 1961.

A.L. Cassius and Marshall Keeble were close friends for over 50 years, and as a result of this deep friendship, brother Cassius helped to raise money for the Nashville Christians Institute from its very beginning in 1940. He has also maintained an interest in Southwestern Christian College in Terrell, Texas from its beginning in 1949.

"The Dean of West Coast Preachers" has truly been a blessing to the cause of Christ. Along with a grateful brotherhood, we salute you brother Cassius!

Directions To The Grave of A.L. Cassius

A.L. Cassius is buried in the Lincoln Memorial Park Cemetery between Gardena and Compton, California. Head south of downtown Los Angeles on I-110 to Exit 10, the Gardena Fwy. and head west. Get off at Exit 8 and turn left on S. Central Ave. The Cemetery will be on the left hand side. Enter the cemetery and bear to the left, and head toward the rear of the cemetery. At the rear, as you turn to the right, stop the car. There will be a little brick wall enclosure. To the left of the enclosure, head back to the fence, and the grave will be just to the left. Being that A.L. Cassius has no marker, it might be good to have the people at the cemetery go out and show you the exact location.

Efforts have been made over the last couple of years to encourage the brethren in the Los Angeles area to provide a marker to designate the grave location of A.L. and and Beulah Cassius. Hopefully such will take place soon and it can be reported on this site. Plot Info: Section G-38 Grave 21.

NOTE: The cemetery closes at 3:00pm. 9-3 are relatively short hours for cemetery visitation. Yet at 3pm the gates are locked. So plan to go early. 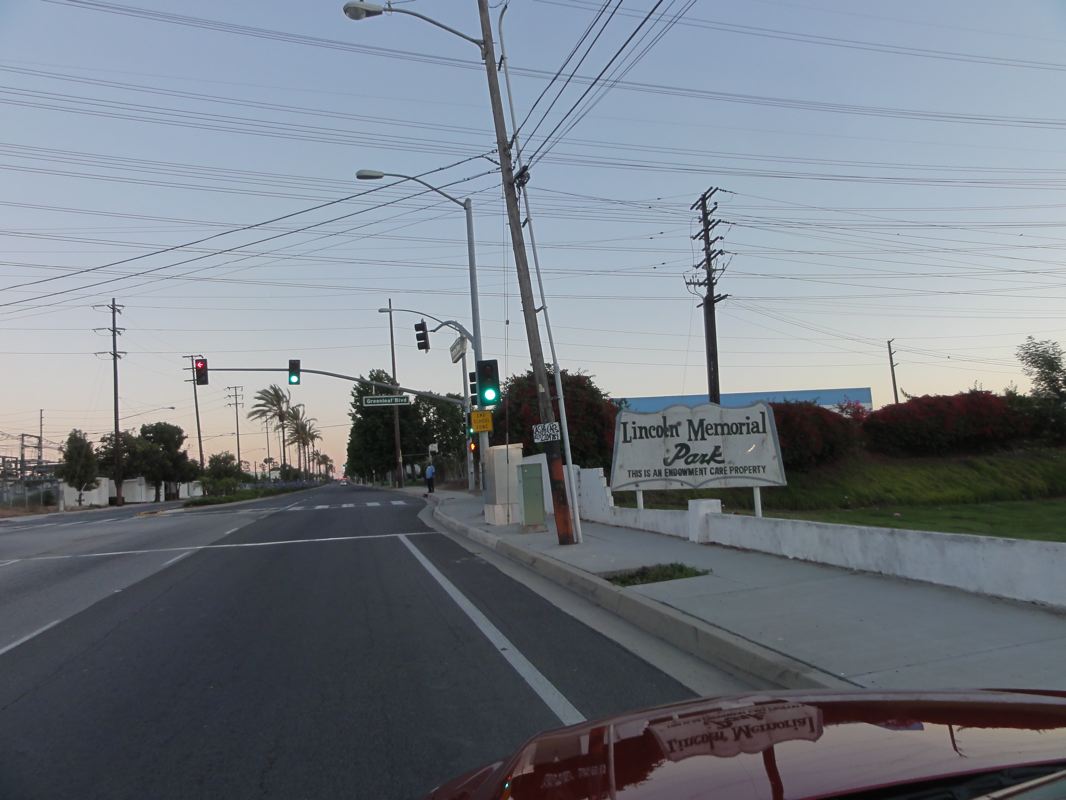 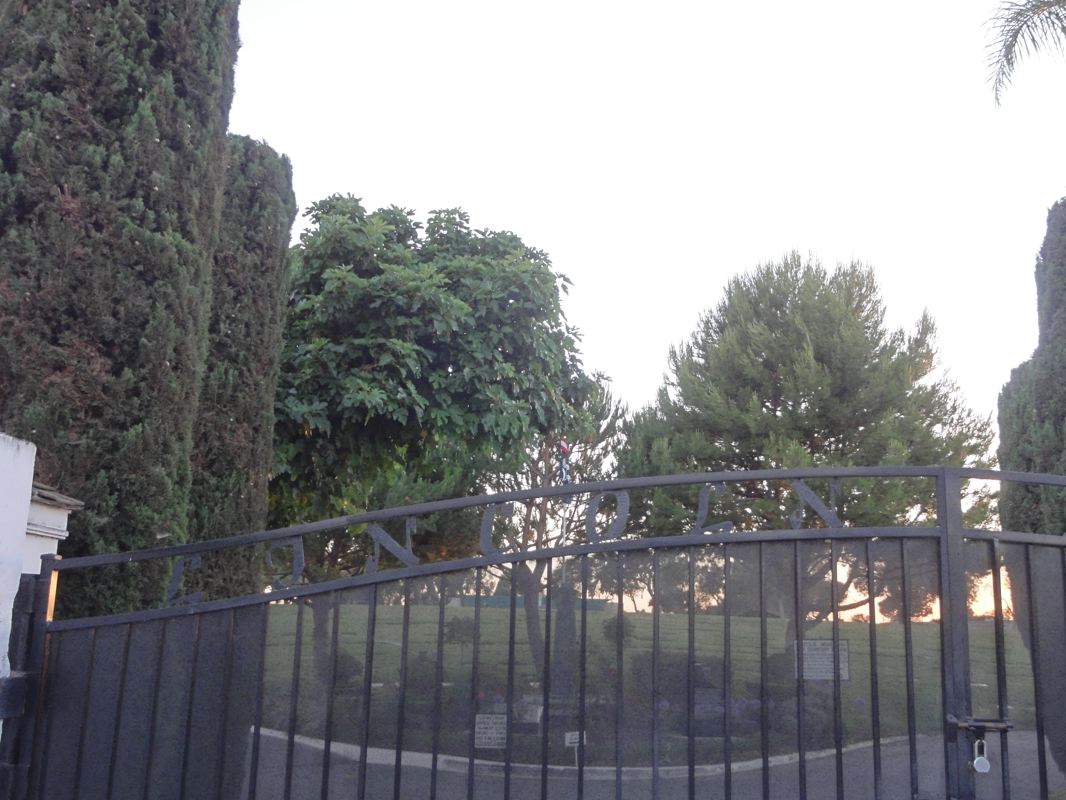 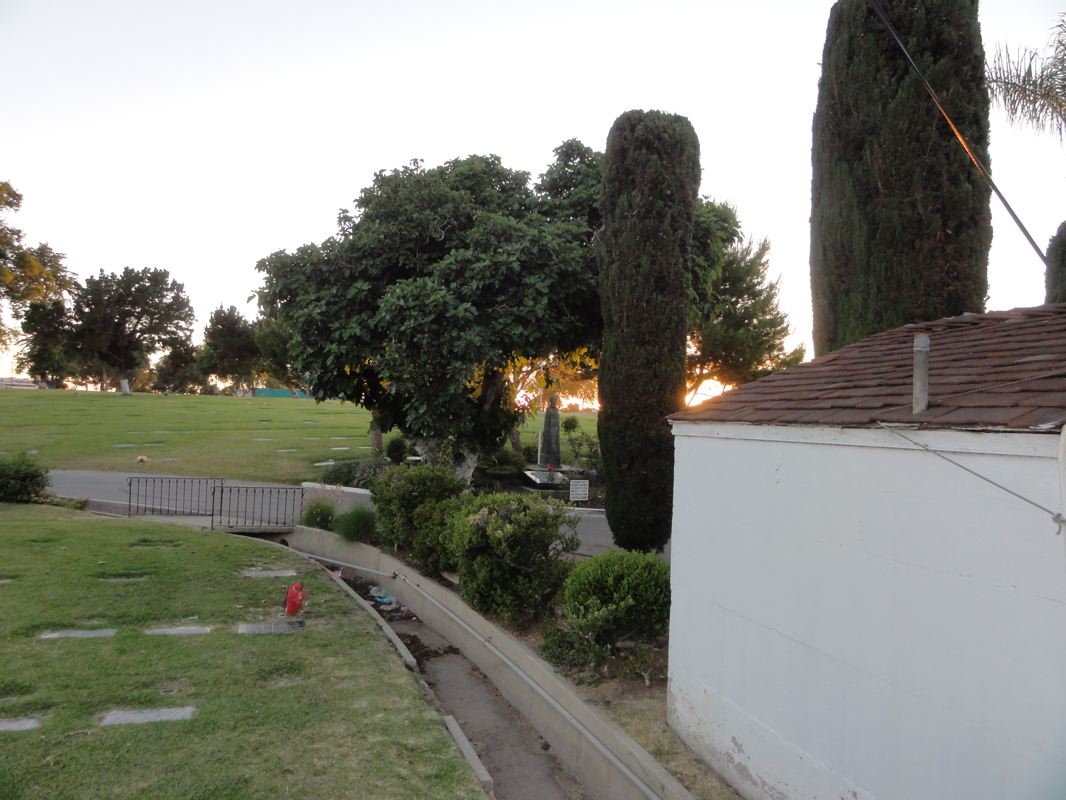 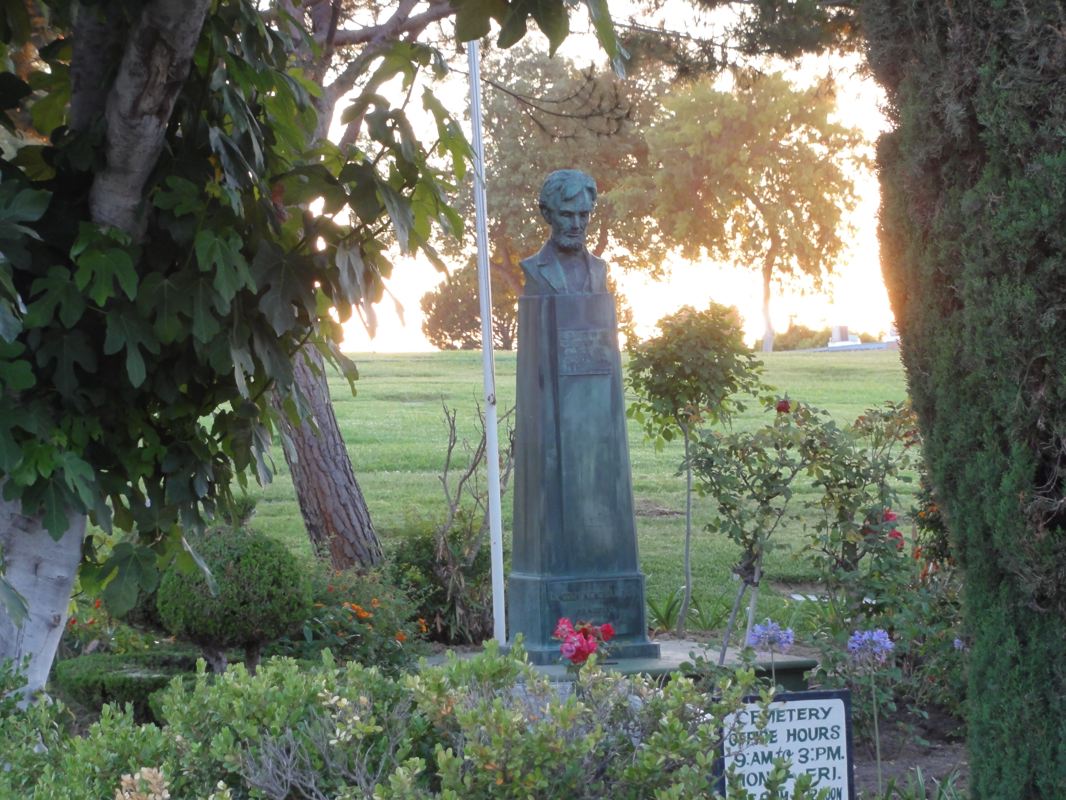 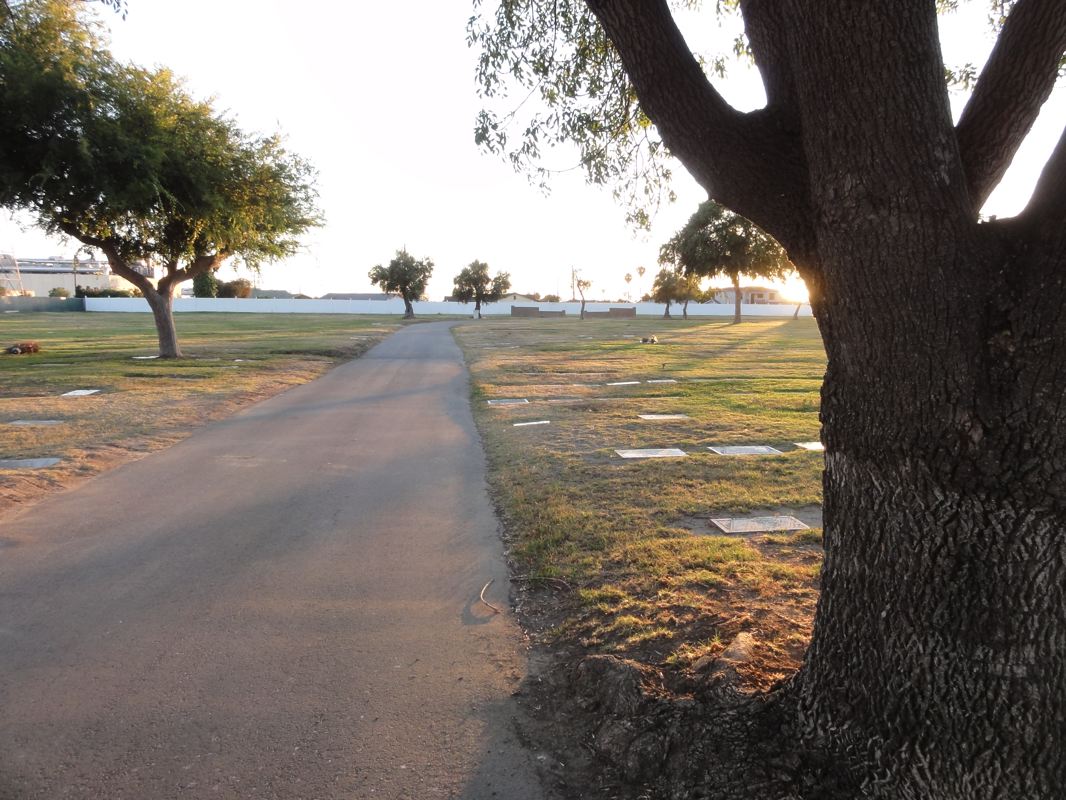 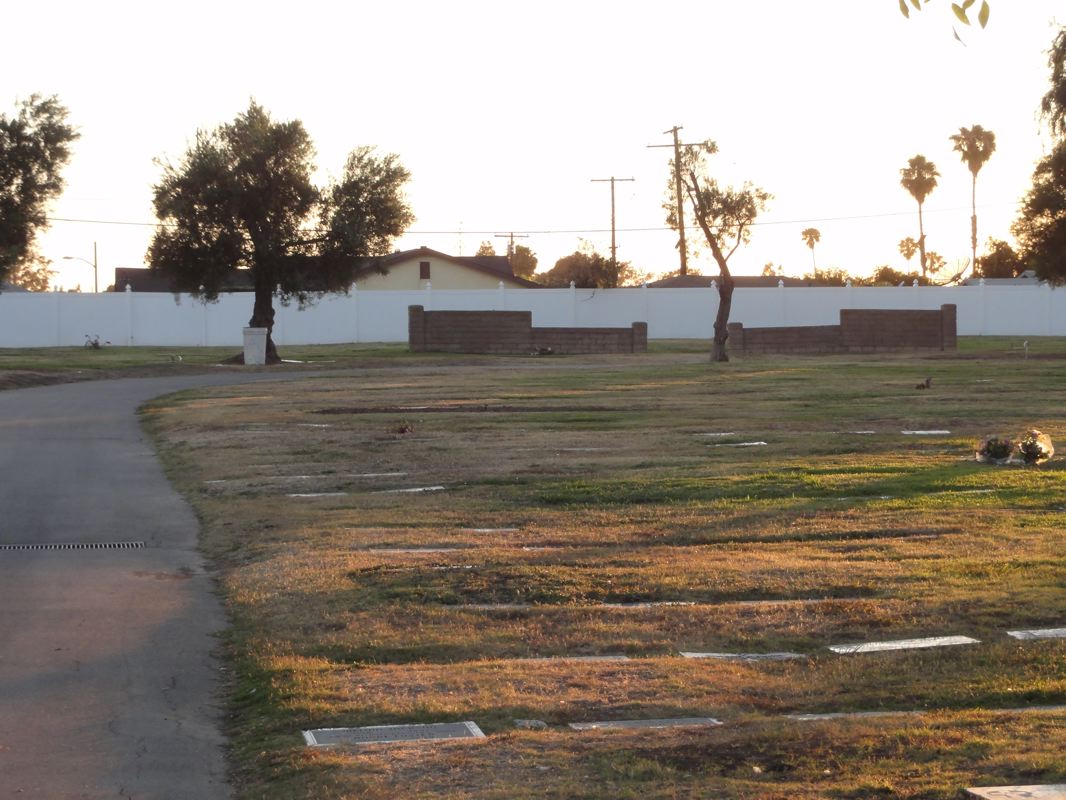 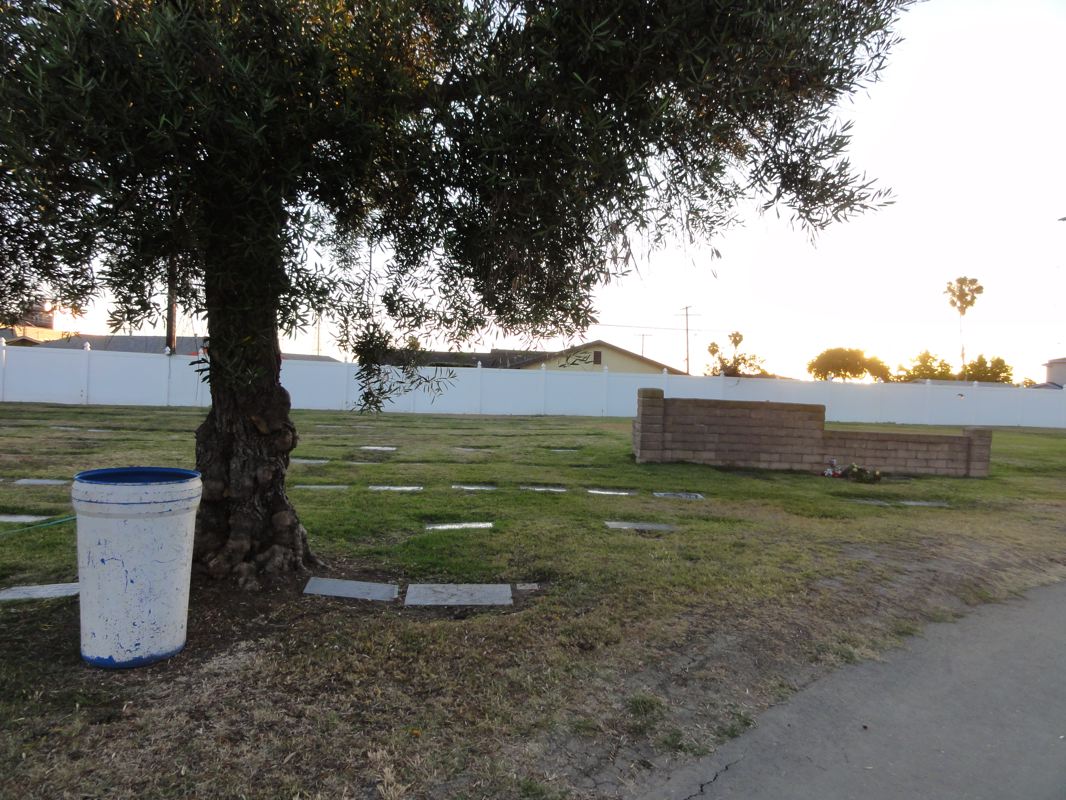 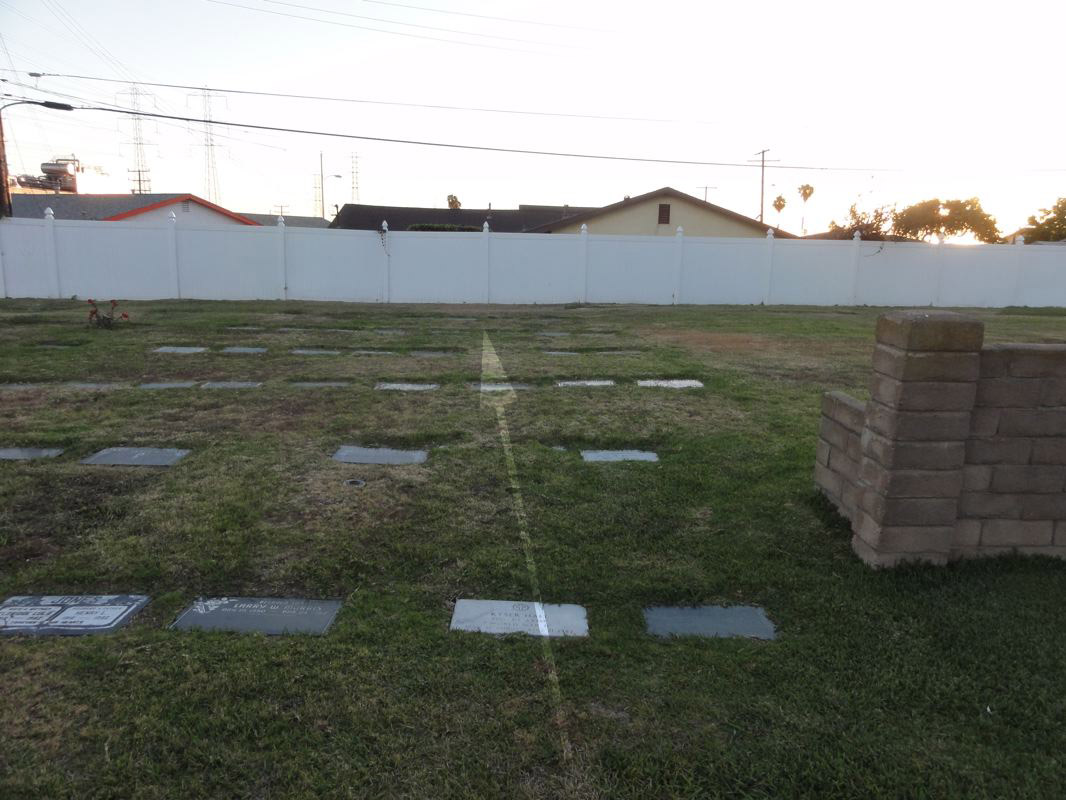 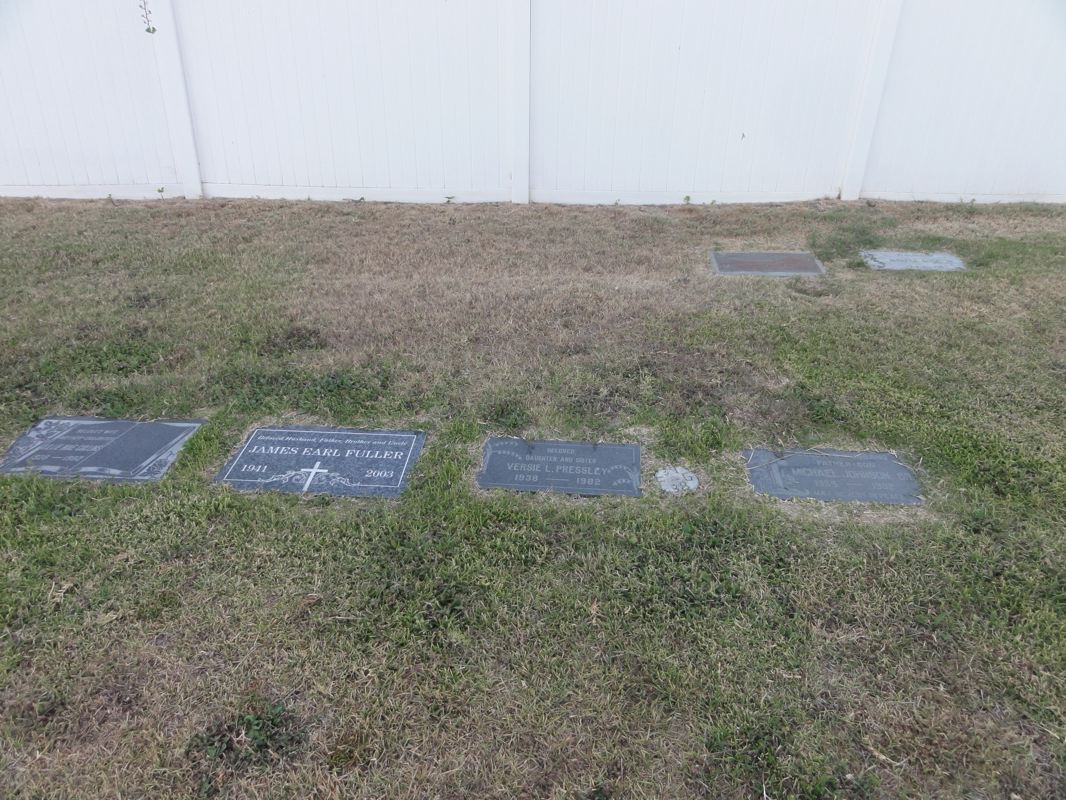 The Location We Deduce As Being Where A.L. Cassius Is Buried

Special thanks to Jake and Alice Lynch of the Compton Avenue church of Christ in Los Angeles, California for assisting me in locating the grave of A.L. Cassius. They have made diligent efforts to have a permanent marker placed in the cemetery at the plot of A.L. Cassius. They have visited the location and continue seeking to keep the memory this great man of God alive. Also, special thanks to Terry Rushford for information that he shared with your web editor from the article he wrote on the life of A.L. Cassius in the Firm Foundation many years ago.

**Good News! I received the photo above of the newly placed marker at the gave of A.L. Cassius. Special thanks to Jake and Allice Lynch and the leadership at Compton Avenue church of Christ in Los Angeles for their untiring efforts to see that a marker was laid to commemorate the life of A.L. Cassius

*Samuel Robert Cassius was one of the earliest and most beloved African-American evangelists. We are in search of his final resting place. We know he died in Colorado Springs, Colorado August 10, 1931. If anyone knows the whereabouts of the grave of S.R. Cassius, it would be a very significant find for researchers of Restoration History as well as for preservation for posterity sake.