“Use Me While I Live”

These words of Jimmie Lovell were on his lips often and expressed his complete dedication to Christ as a servant leader. Jimmie Lovell graduated from this life to the next on Sunday afternoon April 29, 1984. Bob Marshall and Reuel Lemmons expressed the feelings of multiplied thousands of friends in a service conducted Wednesday, May 2. His daughter, Patsie Trowbridge, also spoke, paying touching tribute to Jimmie's ceaseless devotion to God and family.

Jimmie was born in Portland, Tennessee, and was baptized into Christ as a young man. He married Vivian D. Peterman in 1925, and her loyal and steadfast love sustained and encouraged him for almost sixty years. They have one child, Patsie Lee Trowbridge, a practicing psychologist. Jimmie is survived by Vivian and Patsie, her husband Doug, and two grandchildren, Mark and Stacey. 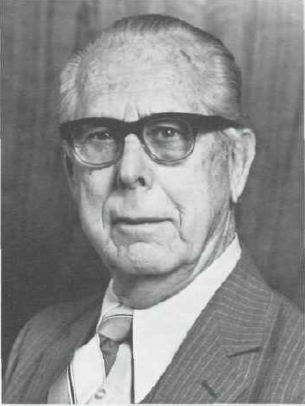 Jimmie worked for the Dupont Company in Denver, Colorado, as a professional shooter from 1923-28. He was a crack shot and a crack salesman and traveled in all the Western states, Canada, Mexico, and Central America for Dupont. In the early 1930's he moved to Los Angeles where he worked with the six large companies that built the Boulder Dam.

He started a magazine for the construction industry called America's Builders, published by Pepperdine College Press. Bill Youngs collaborated with Jimmie on this, and the bound volumes of these magazines honor the major construction people.

Jimmie also started a series of recognition nights on the campus of Pepperdine College. The first, on May 8, 1953, honored the builders of the Hoover Dam with Edgar Kaiser speaking and Ann Morrison receiving the Doctor of Laws Degree. In 1954 the builders of the Grand Culee Dam were honored. These annual events continued through 1959 when the Beavers, an organization of men in heavy construction, was started. This group has grown into the largest organization of heavy construction people in the world. Jimmie Lovell was a dear friend of George Pepperdine and encouraged him in starting George Pepperdine College. He was one of the early additions to the original five board members chosen by George Pepperdine. For thirty-five years Jimmie worked diligently to help guide the destiny of the school, to keep it related to the Churches of Christ, and to raise funds for its development. In 1957 he was very helpful to me as the incoming President. He got many of these top construction people interested in giving to the school. He continued his concern and work in building and strengthening Pepperdine until his death.

But Jimmie's first love through his life was the Lord and the Church. He was baptized by J. P. Watson in 1909 and began preaching in 1915. His family had been members of the Churches of Christ for 150 years. He was a missionary at heart. He edited the Colorado Christian, the California Christian, the West Coast Christian, and Action. Because of his vision and tireless efforts, over two million students have been enrolled in the World Bible School under more than 50 thousand teachers. This current year he estimated that 75 thousand baptisms resulted from that teaching.

He helped build many churches in the eleven Western states and helped directly and indirectly hundreds of missionaries. He was a charter member of the Park Hill Church in Denver, the North Shore Church in Chicago and the Vermont Avenue Church in Los Angeles. He was a special friend to thousands of preachers. He chose Reuel Lemmons to become the editor of Action and to take the lead in carrying on his great work with the World Bible School. He asked that contributions be given to this cause, instead of flowers being sent to his family.

Jimmie was a loyal and true friend to untold thousands of Christians. He believed that one should never give up on people who make mistakes. He often took unpopular positions because of his conviction that he should seek to please God rather than men. Pepperdine University honored him with a Christian Service Award several years ago, and at our last Lectureship, he was asked to speak in appreciation of his dear friend Reuel Lemmons at a special dinner honoring Reuel. We informed him that he was to be the honoree at the next testimonial dinner and he was most appreciative. He was honored with a dinner by the Sunset School of Preaching this year.

He lacked only a few months being 88 years old. But he never lost his vitality, optimism, and his love of the Lord. I count it a privilege to have been one of his close friends, and to have known and loved Jimmie, Vivian, Patsie, Doug, and their children. We will miss him, but look forward to meeting him in Heaven. Thank you, Jimmie, for all you have meant to so many, for your love of the Lord and your love of the Church, which have inspired and blessed us all. Truly you were used by God as long as you lived.

Directions To The Grave of Jimmie Lovell

The Lovells are buried in the southwestern part of the greater Los Angeles area. Heading south on the I-405. Go to the I-110 toward Lomita. Take Exit 3b. and turn right on W. Anaheim St. Then turn left on S. Western Ave. Enter Green Hills Cemetery on your right and turn right in front of the funeral home. Go up Green Hills Dr. to the second left, Avalon Dr. Stay to the left on Hillcrest Dr., and just before you come to the bank of mausoleums in the side of the hill, stop at #225. It should be written on the curb. Enter at the number and go up the hill about 10 or 12 rows toward the trees, and you will come to the Lovell plot. Info: Green Hills Memorial Park Rancho Palos Verdes Los Angeles County California, USA Plot: Memory Lawn, 257,B 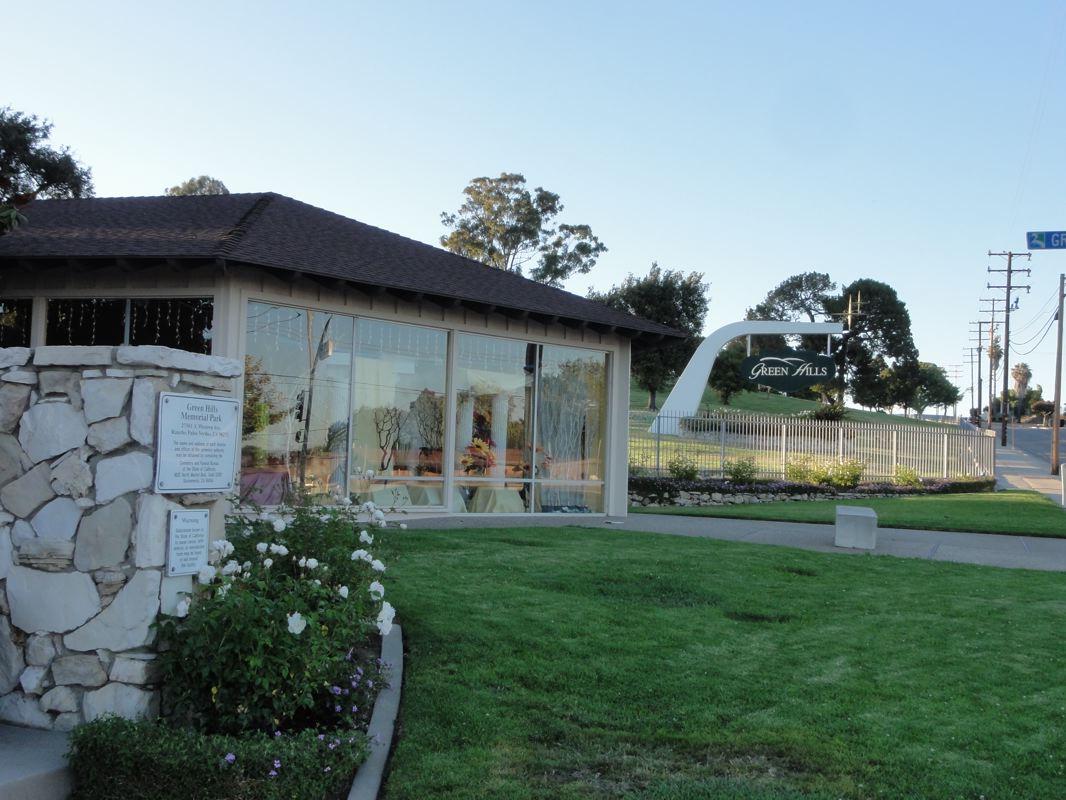 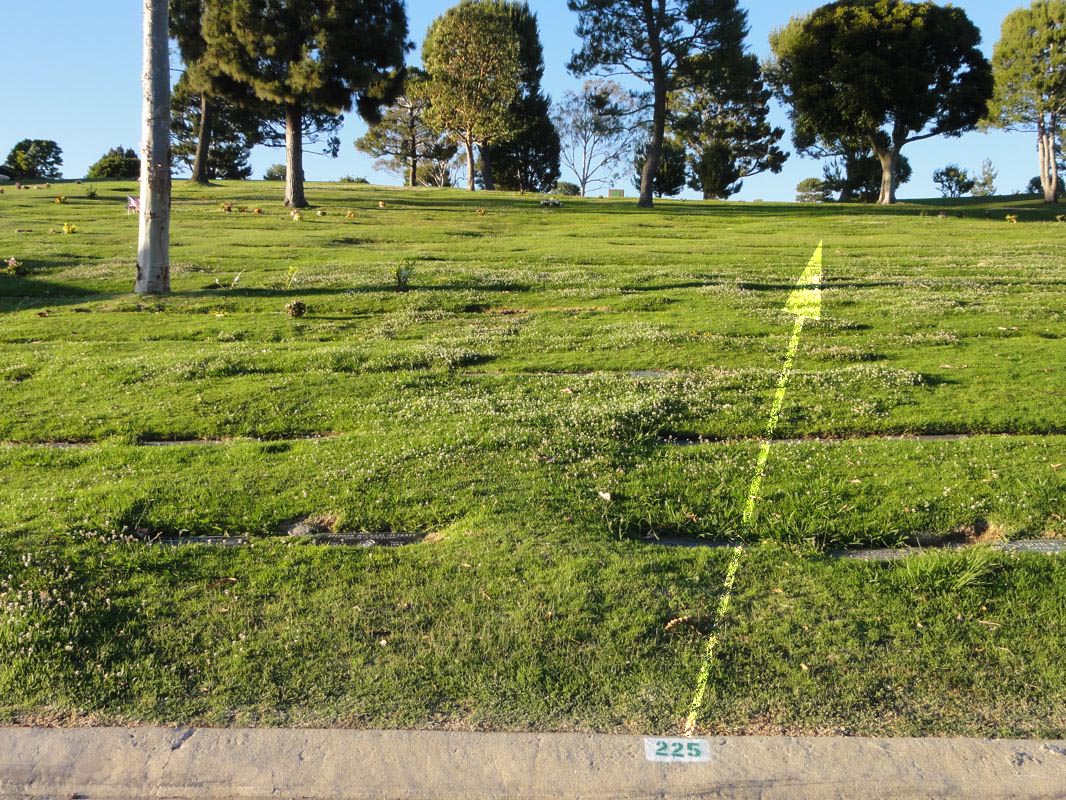 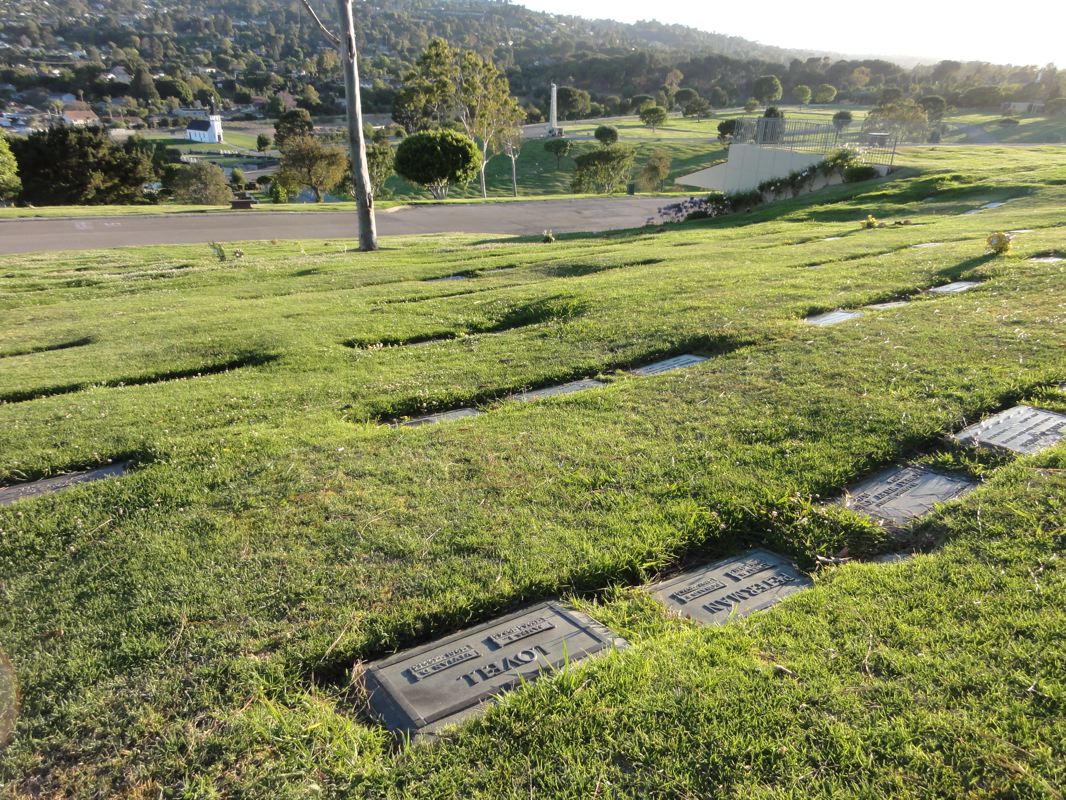 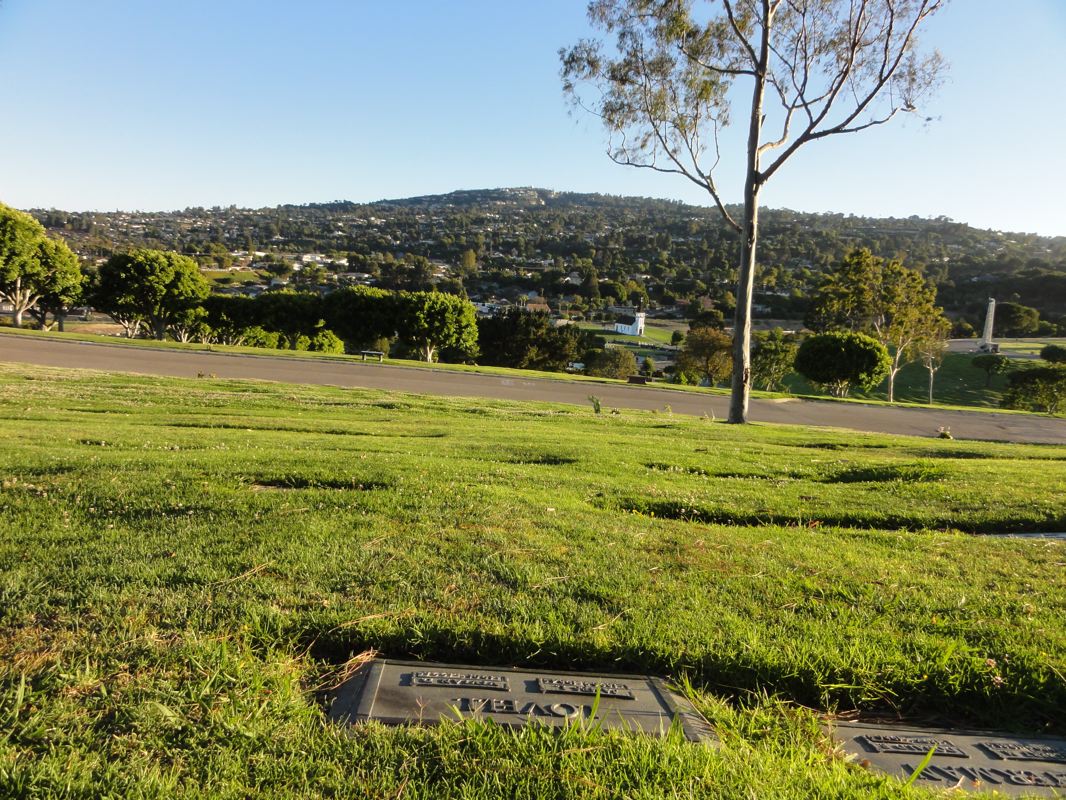 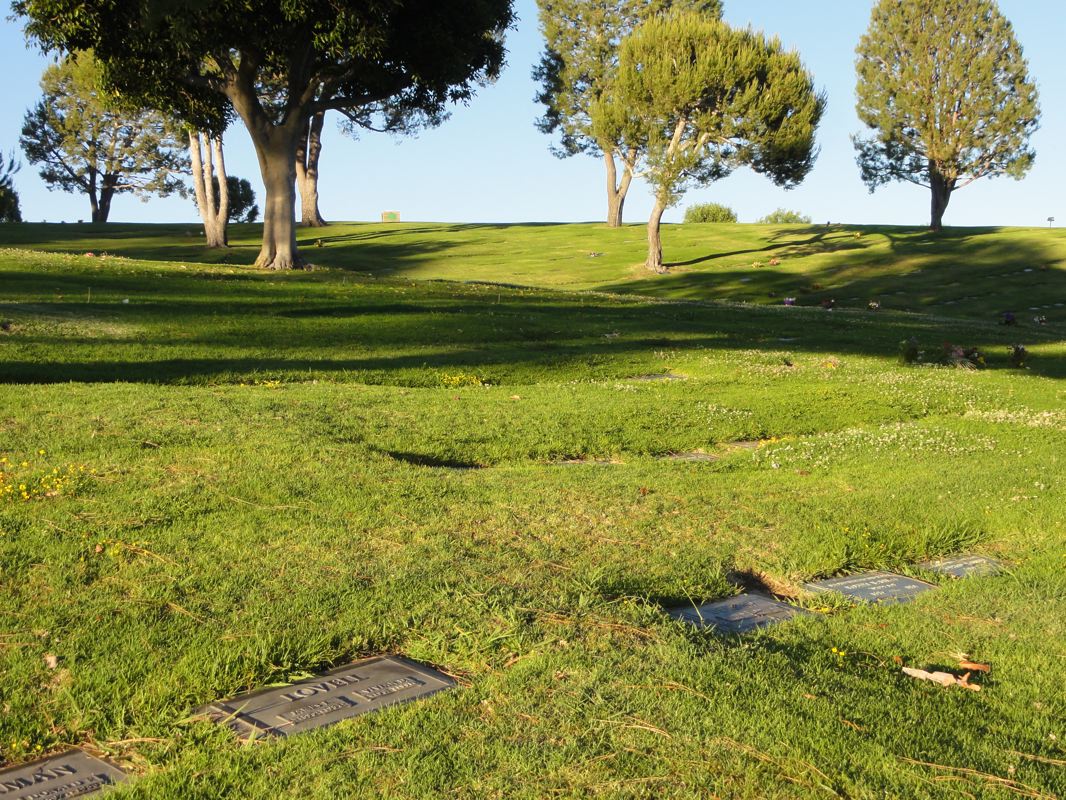 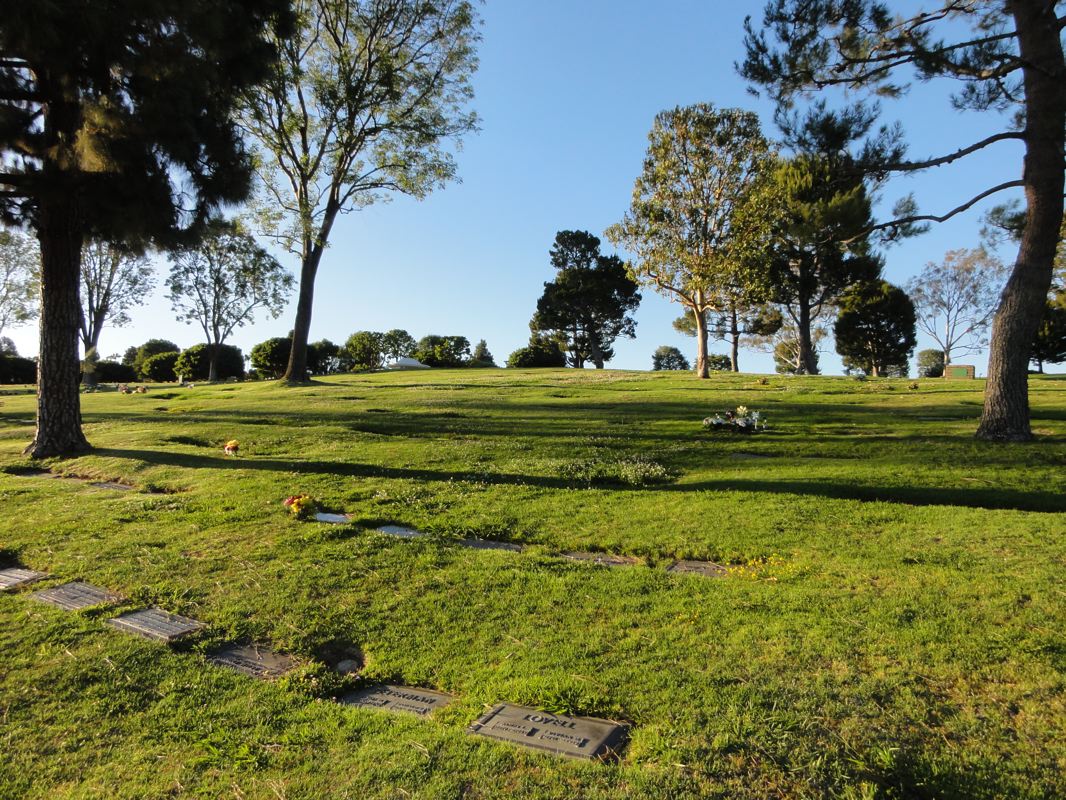 Facing North From The Lovell Plot 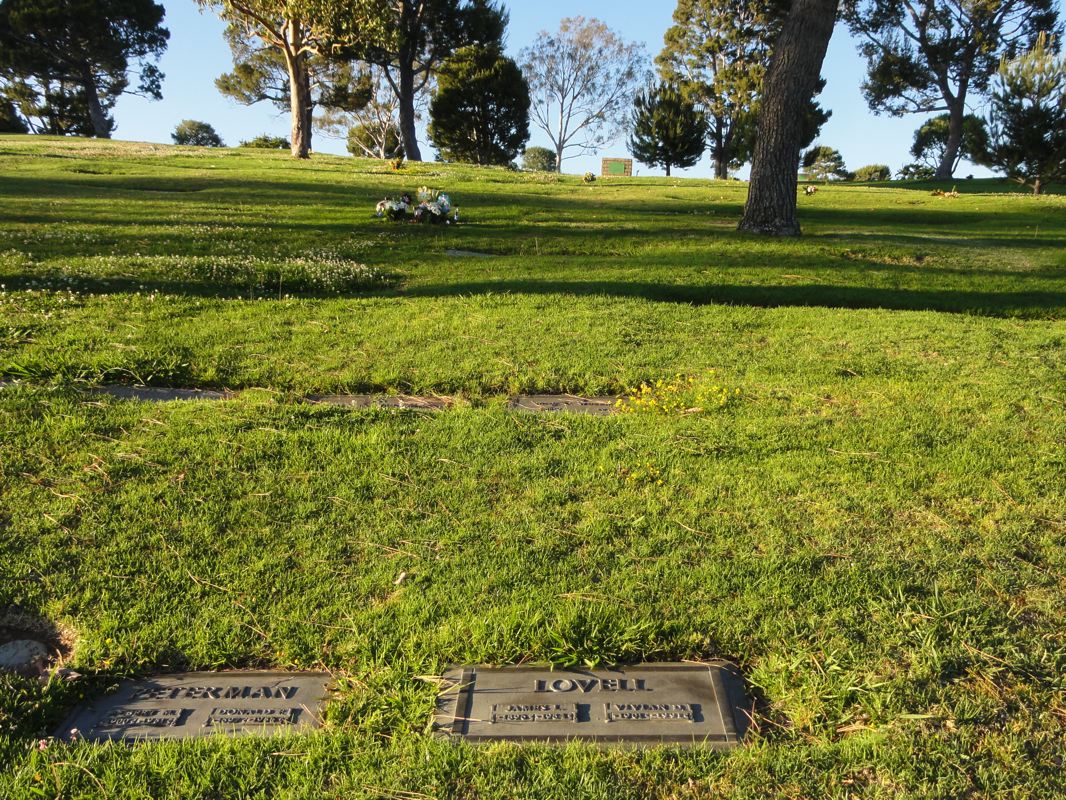 Facing Northeast up the hill from the Lovell plot 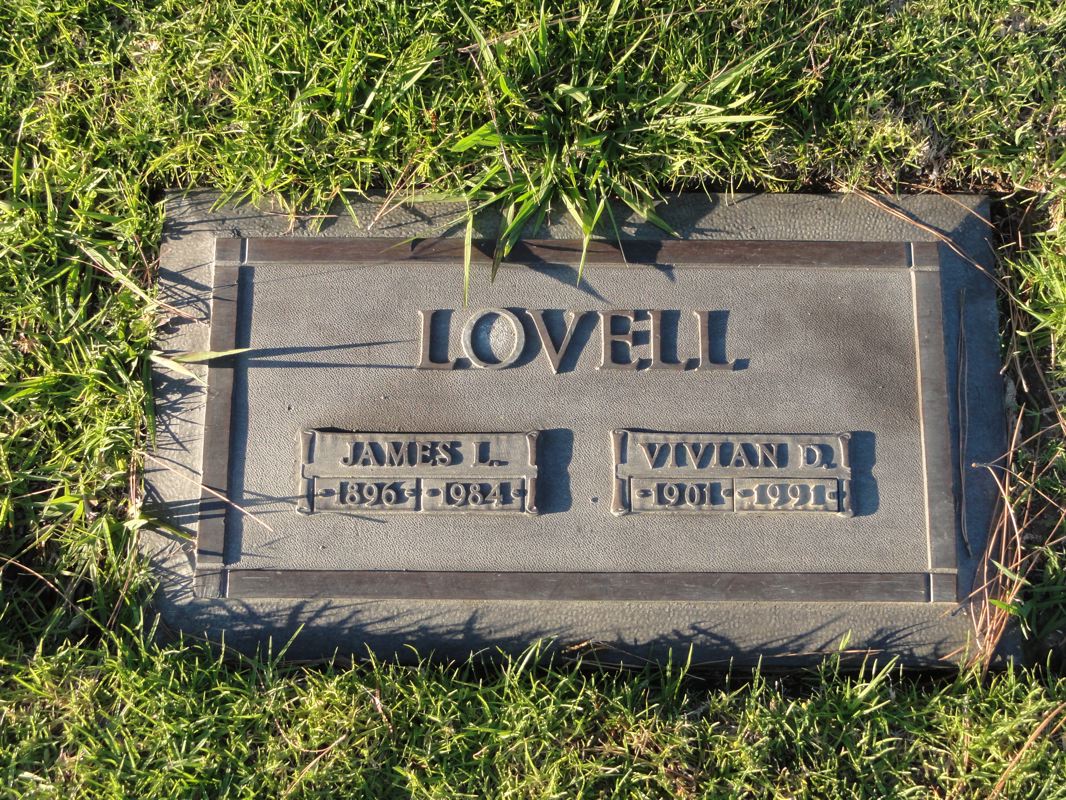 Special Thanks: To Jerry Rushford. I was able to visit in the home of Jerry and Lori Rushford in late June, 2012. I was just returning from a mission trip to the Fiji Islands, and had about a 30 hour layover in Los Angeles. The Rushfords were wonderful hosts, and Jerry was a great resource in assisting me in the finding of the grave of Jimmie Lovell. If visiting in the Los Angeles area, be sure to visit Pepperdine University in Malibu. Besides having a beautiful campus, be sure to visit the Church of Christ Historical Room, upstairs in the university library. Jerry Rushford has put much work through the years into preserving the history of the churches of Christ on the western coast of the United States of America.