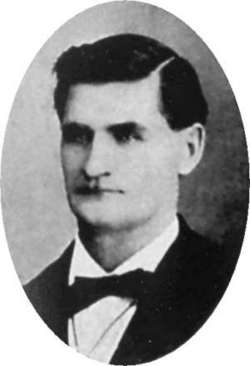 Daniel Webster Nay was bom June 26, 1854, in Edgar County, Ill.; departed this life at the home of his son, in Pasadena, Calif., September 30, 1944, at the age of ninety. He was the youngest of twelve children bom to Daniel and Mary Ann Nay. His father died when he was a small boy, and an uncle who was a minister of the church reared him, instillIng within him the desire to preach the gospel.

He was baptized in the month of May, 1867, at the age of thirteen; and five years later he migrated to Lone Tree, Neb., but retumed to Illinois in 1874. On January 19, 1875, he was married to Sarah J. Hinds at a church wedding at the Pleasant Hill Church, in Edgar County, Ill. To this union were born three children—Harvey E., who passed away In 1901; Pearly E., who passed away in 1909; and Noble E., who resides in Pasadena.

In 1882 Brother and Sister Nay went to Rush County, Kan., as homesteaders, and lived there until 1897, at which time they moved to Missouri, living in different parts of that state till coming to Califomia in 1919. For the past twenty-five years they have lived at Baldwin Park and in Pasadena, having spent the last seven years at the home of his son, where he died, being preceded in death by his devoted Christian wife, who passed last January.

Brother Nay preached his first sermon January 1, 1882. For almost sixty years, by God's grace, he has kept steadfast to this, his most solemn obligation. The records from an ancient family tree, dating back to Napoleon, show him to be a descendant of General Nay.

At the time of his death he was the oldest Nay on record. He leaves a son, eight grandchildren, and six great-grandchildren. Alton H. Wimbish and Paul Harper presided at the funeral, which was held in the meeting place of the church, corner of Walnut and Hudson Streets, Pasadena, Calif. I had known this venerable soldier of the cross for forty-seven years, Brother Nay having buried his father at the turn of the last century. They were associate elders when father died.

Righteousness In Christ
Chart Sermon By Daniel W. Nay, circa 1897

Directions To The Grave of Daniel Nay

Daniel W. Nay is buried in the Mountain View Cemetery And Mausoleum in Altadena, Los Angeles County, California. From downtown L.A., the I-5 north to the Glendale Fwy. Then take the Colorado Fwy. toward Pasadena. Then take the I-210 (Foothill Fwy.) North. Take the Lincoln Ave. Exit. Turn right onto Lincoln. Go a few blocks and turn right on W. Woodbury Rd. Turn left on N. Fair Oaks Ave. The Cemetery will be on your right. Enter from the N. Fair Oaks Ave. side. There are other entrances but they stay closed. Go into the office. There is a computer there in the foyer that you can use to type in the name of Daniel Nay, and tell it to print. It will print not only a cemetery map, but a section map as well; a great little invention. From the entrance, take your first left and stay to your left until you get to the rear corner of the cemetery. When the road takes a hard turn to the right, stop the car. Head into the section to your left, in the corner. There is a row of graves close to the road with hedge bushes beside them. Just behind will be some round, log shaped markers. Just behind them is the NAY plot. The physical address is as follows: 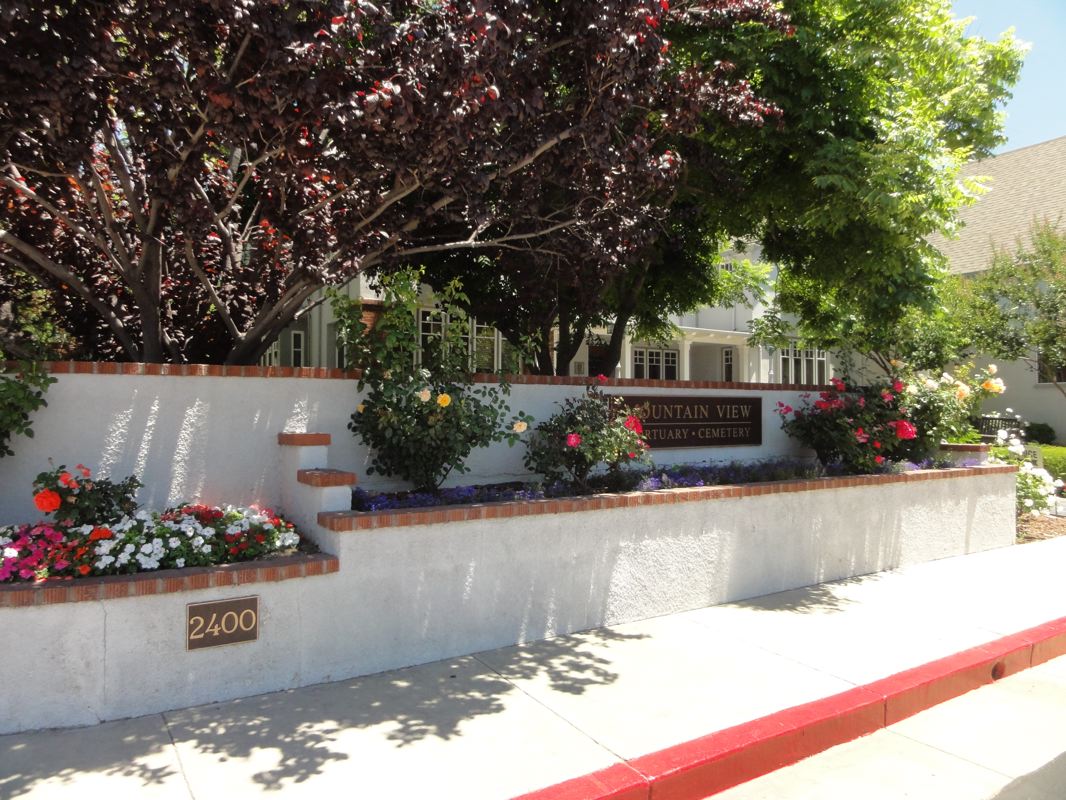 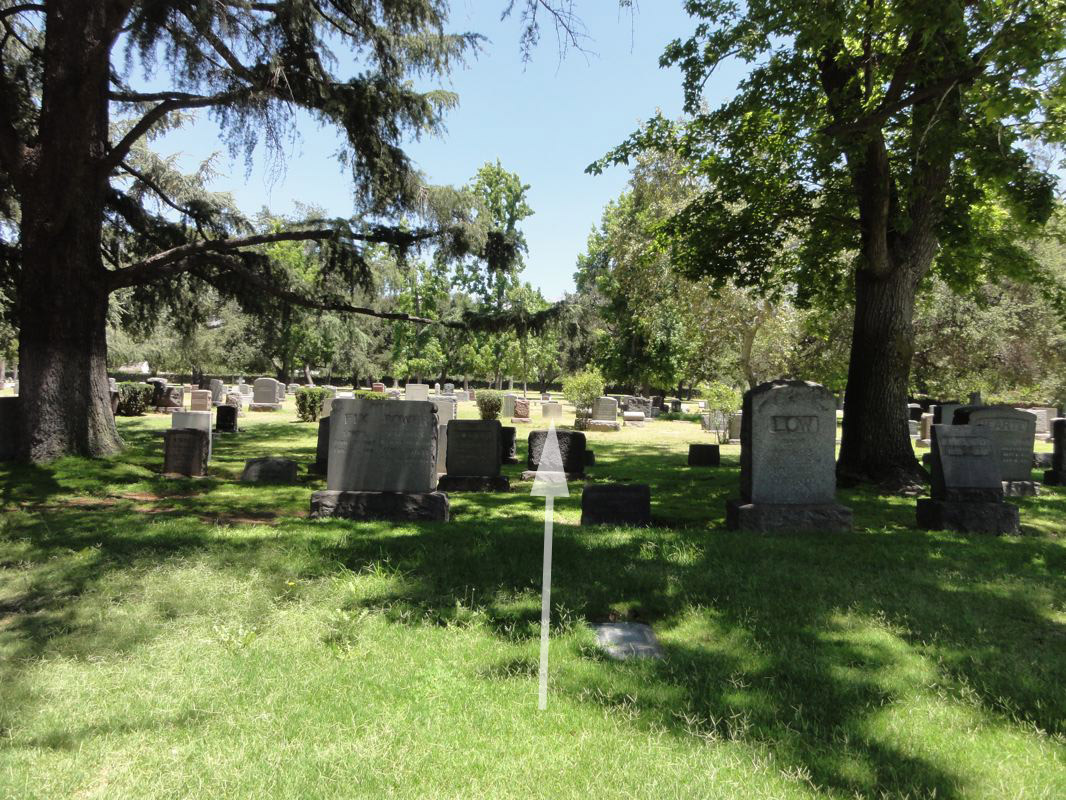 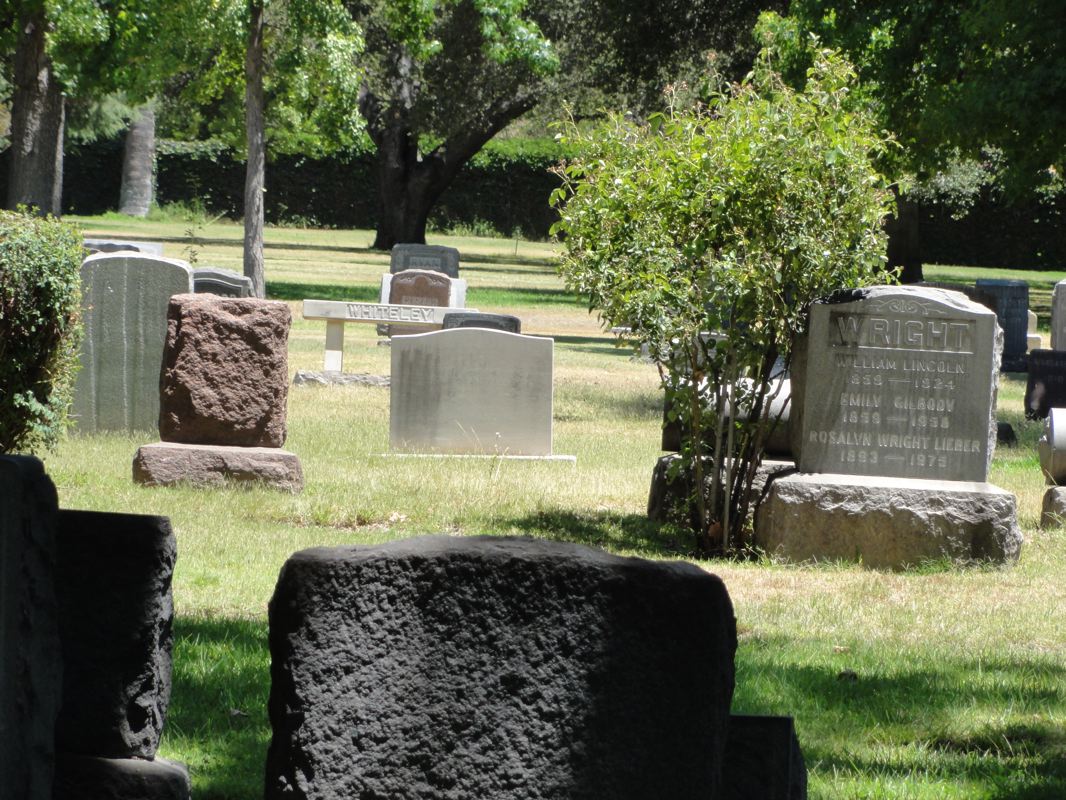 NAY plot in center above 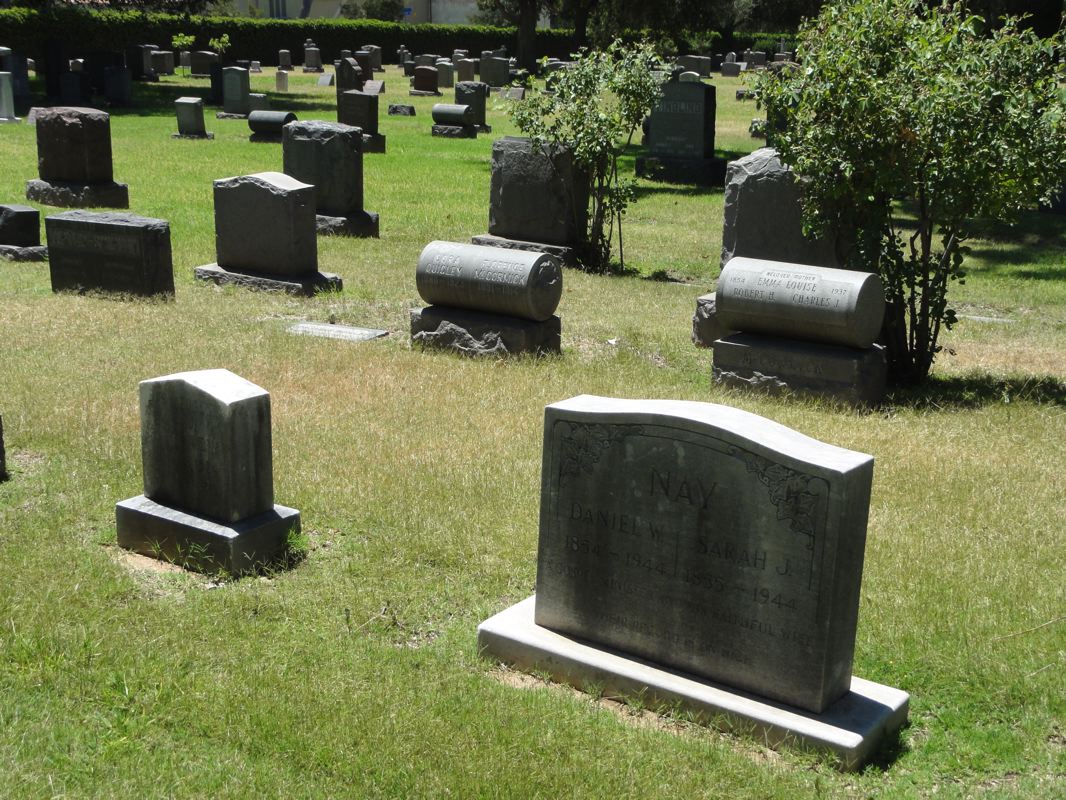 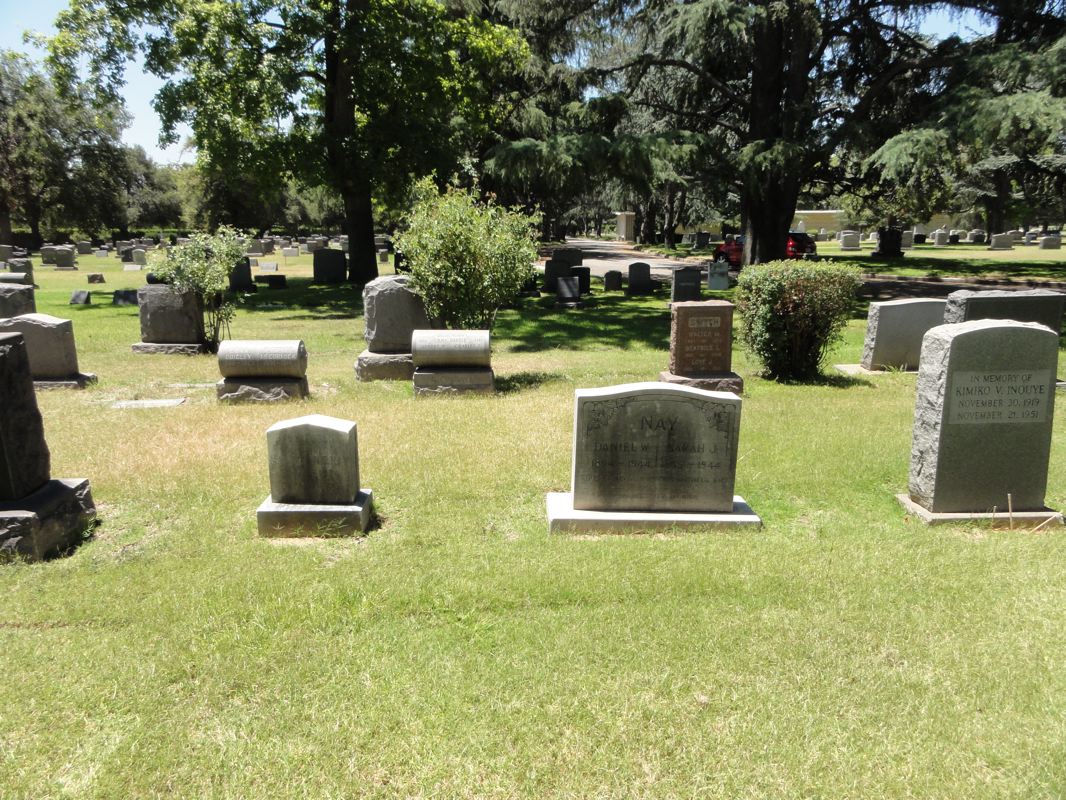 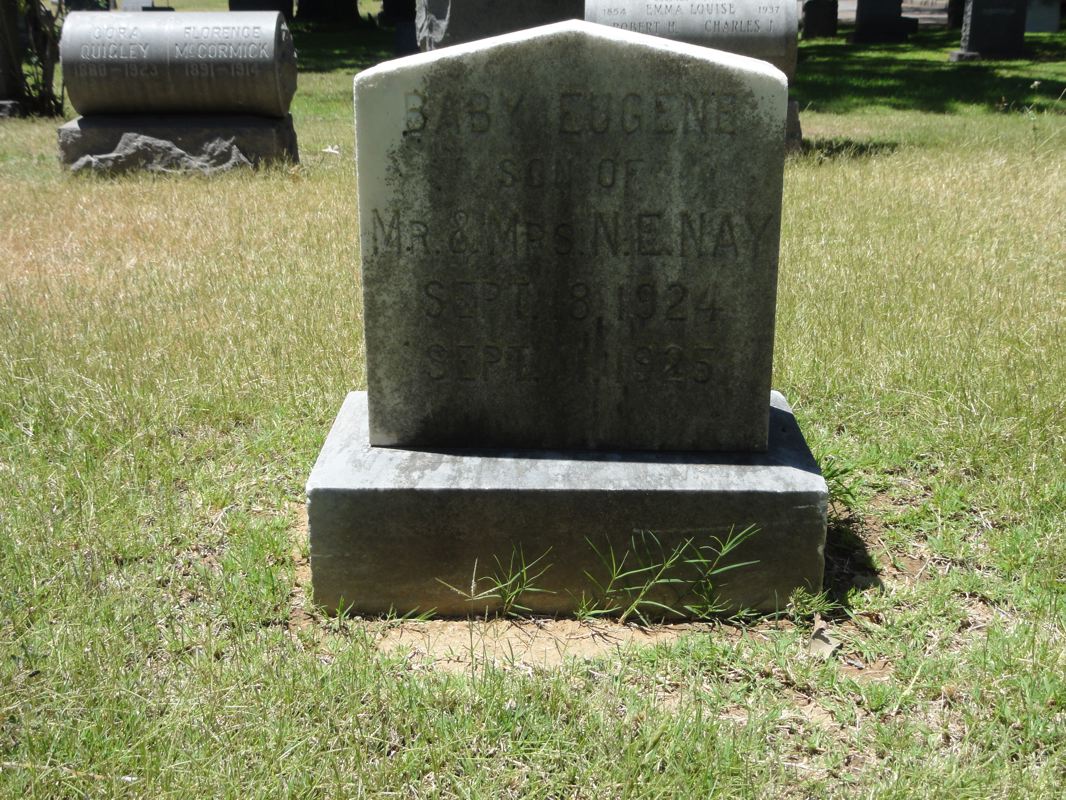 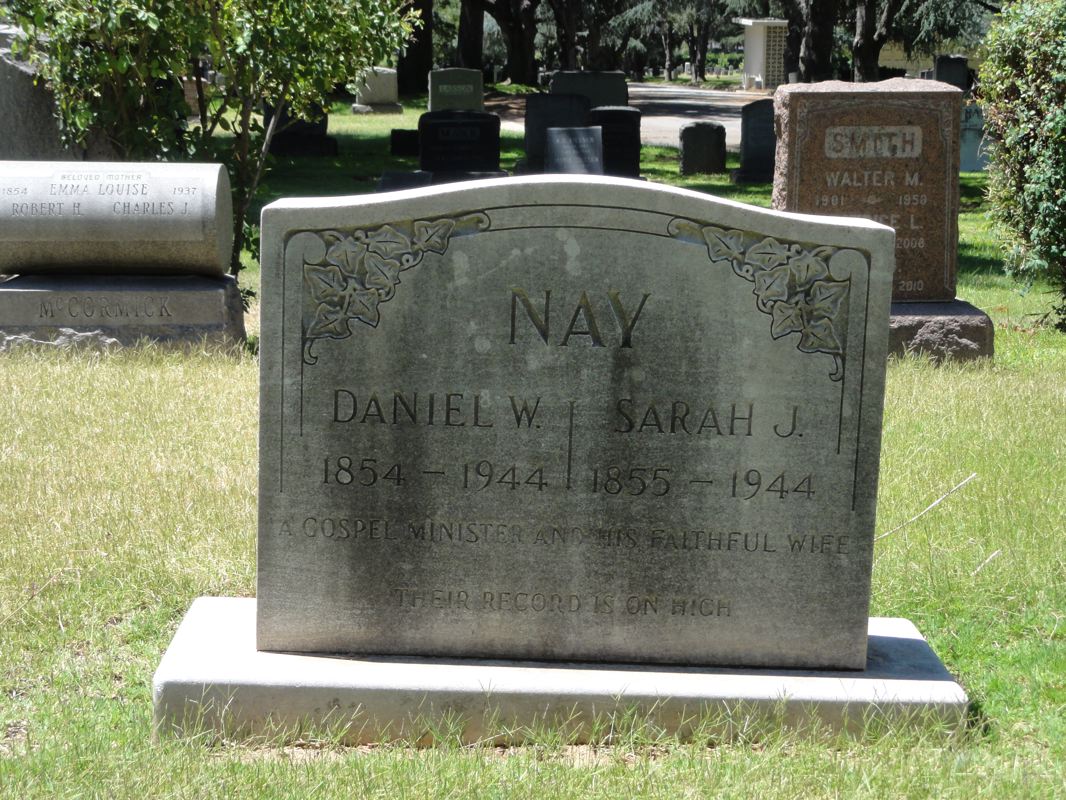 Special Thanks: To Jerry Rushford. I was able to visit in the home of Jerry and Lori Rushford in late June, 2012. I was just returning from a mission trip to the Fiji Islands, and had about a 30 hour layover in Los Angeles. The Rushfords were wonderful hosts, and Jerry was a great resource in assisting me in the finding of the grave of Daniel W. Nay. If visiting in the Los Angeles area, be sure to visit Pepperdine University in Malibu. Besides having a beautiful campus, be sure to visit the Church of Christ Historical Room, upstairs in the university library. Jerry Rushford has put much work through the years into preserving the history of the churches of Christ on the western coast of the United States of America.