"Remember them that had the rule over you, men that spake unto you the word of God; and considering the issue of their life, imitate their faith." (Heb. 13:7).

Brother Michael Sanders, who passed away in Los Angeles, Cal., September 23, 1915, was born in Pennsylvania a little over seventy-two years ago. While yet a youth he moved to Iowa, where he engaged in school-teaching and farming. There, forty-eight years ago, lacking a few days, he married Malinda M. McDonald, who survives to mourn his departure. Of this marriage two children were reared-a son and a daughter. The son survives, but the daughter passed away several years ago. From Iowa he moved to Kansas, where for some years he was engaged in the live-stock and other business. From Kansas he came to Los Angeles, where he lived for more than thirty years.

Brother Sanders was a soldier in the Federal Army during the Civil War and was wounded in the battle of Vicksburg, Miss. But years ago he became convinced that war and even an active participation in politics were inconsistent with Christian faith and teaching, and he acted accordingly. In business he was diligent, hones, upright, and just, and I believe he won the confidence and respect of many, if not all, of those with whom he had dealings. Recently I had occasion to meet some bankers and other men with whom he did business, and they all said, "He is a fine man;" and one of his business friends, writing from San Francisco, said he was one of God's noblemen and that the world would be greatly blessed if there were more such men.

The text of scripture which I read was written in reference to Christian teachers and leaders who had already died, and the living Christians were exhorted to remember them and to imitate their faith. I feel that this passage of scripture in appropriate for this occasion, and especially applicable to Brother Sanders, for he was a man of faith. He was our teacher and leader for a long time, and there was much in his faith and life worthy of imitation. In fact, there was scarcely anything in his faith and character that I cannot most heartily commend.

He was a man of decided positive convictions. He could not deviate from what he believed to be right. Although he was firm in his convictions, he was not obstinate; for he could and often did give way to the feelings and preferences of others when the sacrifice and preferences of others when the sacrifice of no truth or principles was involved. He believed that the Bible was an all-sufficient rule of faith and practice in the religion of Jesus Christ; and he believed in adhering to that rule strictly and was ever ready to maintain what he believed it taught.

In 1900, while on a trip in the East, he visited Nashville, Tenn., and the school I was attending. It was there that I first met him. For thirteen years of the time since then we have been intimately associated in religious work, and in all these years there was never a cross word nor the slightest disagreement between us. There was no occasion or need of it, for I have never known a man whose faith and convictions were more fully in accord with those of my own. Whatever good we may have accomplished during these years of association and work, I can trace to a single question-a question that often seems to me to have been providential; and I love to think of it as such. Having learned that he was from California, I asked him what kind of a place it was for a preacher. He said that the preaching was greatly needed, but that it was a poor place to get pay. I replied that I was not looking for pay, but a place to preach the gospel, and, if possible, a place where it had not been preached before. That was a casual question, but it led to my coming to California and changed, to some extent, the whole course of my life. And while it has separated me from my kindred and people, I do not regret it; because I believe it has been for good, and I know it has brought to me the friendship of some of the dearest and best people on earth. No man ever had a better friend than Brother Sanders has been to me, nor do I wish or hope for a better one. I never asked him for favors nor solicited his aid in my own behalf, yet he was a father to me.

A dominant trait of his character, and one worthy of imitation, was thoroughness. He was an orderly, accurate, careful, painstaking man. He acted upon the principle that whatever was worth doing at all was worth doing well. He could not slight any effort; he could not be satisfied with any task incomplete, nor rest content till the job was finished just as he thought it ought to be. He had a place for everything and everything in its place. If he had a tool or a receipt or anything else, he knew just exactly where it was; if he had anything to hang up, he had a certain place and a certain way to hang it; if he had anything to put down, he had a certain way and place to put it. This was a fixed habit of his life, and it clung to him till the last; for he kept his business in systematic shape and order and his books balanced even up to within a few days of his death. Thus he passed away with his affairs in perfect shape and order, just as he ever wished it to be. He gave directions concerning his funeral and burial, instructing his son as to the kind of casket he should buy. He did not wish to be laid away in an expensive shroud, but in a simple garment like one retiring to rest in the evening-"like one who, sustained and soothed by an unfaltering trust, wraps the drapery of his couch about him and lies down to pleasant dreams."

The habit of accuracy and thoroughness prevailed not only in business, but in his religious service and work as well. He was a diligent, careful, painstaking student and teacher in the Bible. And like Hezekiah, the good king of Judah, "in every work that he began in the service of the house of God, and in the law, and in the commandments, to seek his God, he did it with all his heart, and prospered."

Brother Sanders was the most faithful steward and the best example I have ever known in the right use of money. He believed he was responsible to God for the use he made of it. He would not, therefore, waste it upon himself in the luxuries, pleasures, and vanities of the world, as so many do. He often said that the Lord had blessed and prospered him, and that he wished to use his means to the honor and glory of God and lay up treasures in heaven. While he was economical, he was, nevertheless, quite free with his money in helping the poor and in the support of any worth cause. He believed in tithing, that he ought to give a tenth of all his income to the Lord, and he adhered to that conviction strictly. But his giving nearly always extended far beyond a tenth.

He was quite extensively known and loved for his liberal support of the gospel in both home and foreign fields. He frequently and freely donated to the missionary cause in Japan, and for the last two or three years he has supported a missionary in India to the extent of four hundred dollars a year; and as that missionary has converted several hundred people to the Christian religion, I dare say some of them will be "stars" in Brother Sanders' crown of eternal life.

Many of us know of the work he has done here in this State. Nearly every church of Christ in Central and Southern California is indebted to him, more or less, for help; while some of them, so far as many as can see, owe their very existence to his efforts. But for him, neither this congregation nor this house, which has been a comfort and an encouragement and help to hundreds of people, so far as i am able to see, would have had an existence at all. Besides, many poor people, both hearer and elsewhere, have been helped by him, and of whom the church does not know.

I do not like to think of his long, painful affliction, for he suffered for at least a year. But he bore it patiently-more patiently, it seems to me, than most people could have borne it.

We shall miss him; miss his counsel, his sound teaching and advice. His seat is vacant and can never be filled, for we hardly see his like again.

Directions To The Grave of Michael Sanders

is buried in the eastern part, near central Los Angeles, California in Evergreen Cemetery. It is in the Boyle Heights area. From America's longest Interstate I-10 in downtown take Exit 19a onto the I-5 south. Go to the 4th Street Exit. Then turn left. Head about ten blocks and turn left on N. Evergreen Ave. Head about five blocks to the cemetery on the right side. The address is 204 North Evergreen Avenue, Los Angeles, California. The office phone is #323-268-6714.

Enter the cemetery and pass the offices (on left). Take the first right and follow the road around until you see an old chapel and crematory. Pull to the left of it and stop just even with the steps at the entrance of the building. At the corner of the section look for the large monument to COULTER. The Garvin monument is smaller, but is locate behind it, almost in the same plot as B.F. Coulter. Also buried at Evergreen Cemetery is T.D. Garvin and Carroll Kendrick.

NOTE: Evergreen Cemetery is the oldest cemetery in Los Angeles, having been started in 1877. It is a beautiful old cemetery that is still interring people. The location is in somewhat of a rougher part of L.A. however. Some of the earliest of settlers of Los Angeles are buried there including some of the Van Nuyes family. Other notable individuals include Eddie "Rochester" Anderson (on the Jack Benny Program), and Matthew "Stymie" Beard, Jr., (of Little Rascals fame), are buried there. 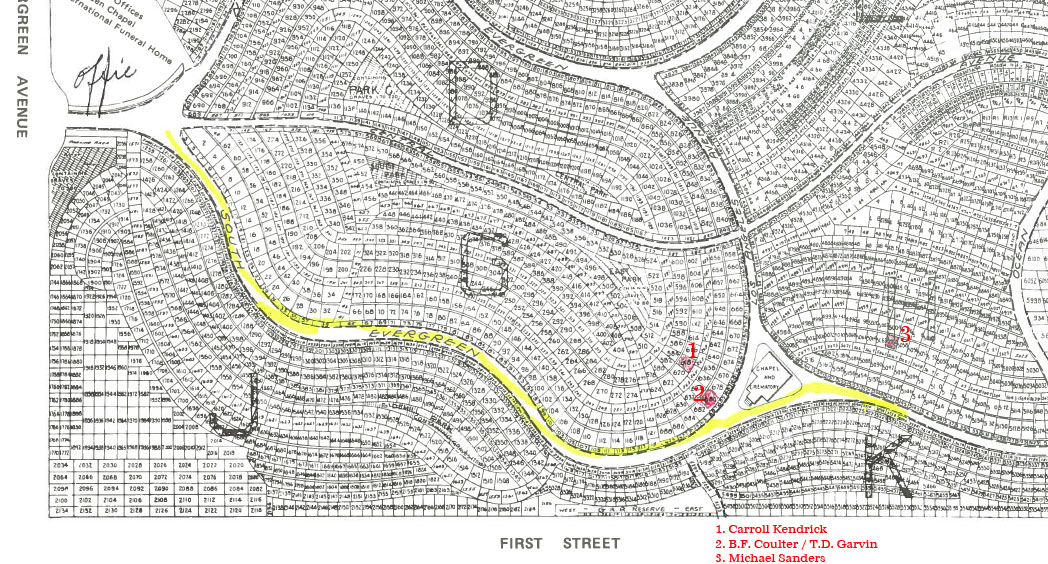 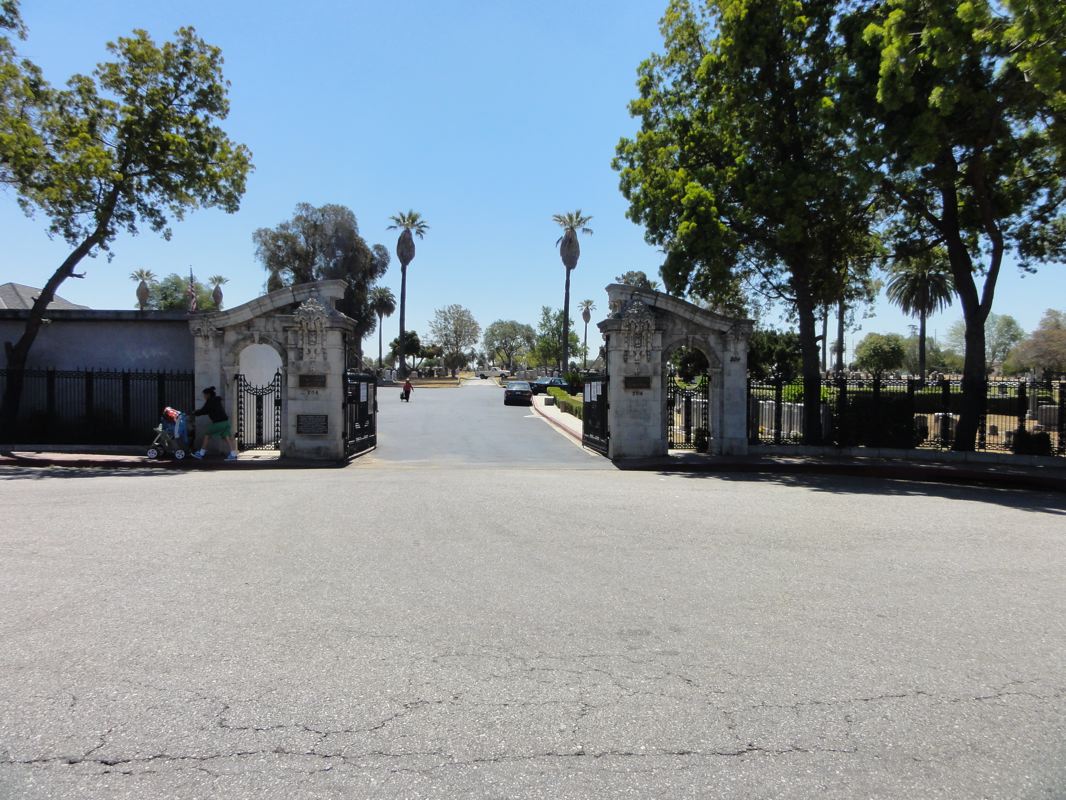 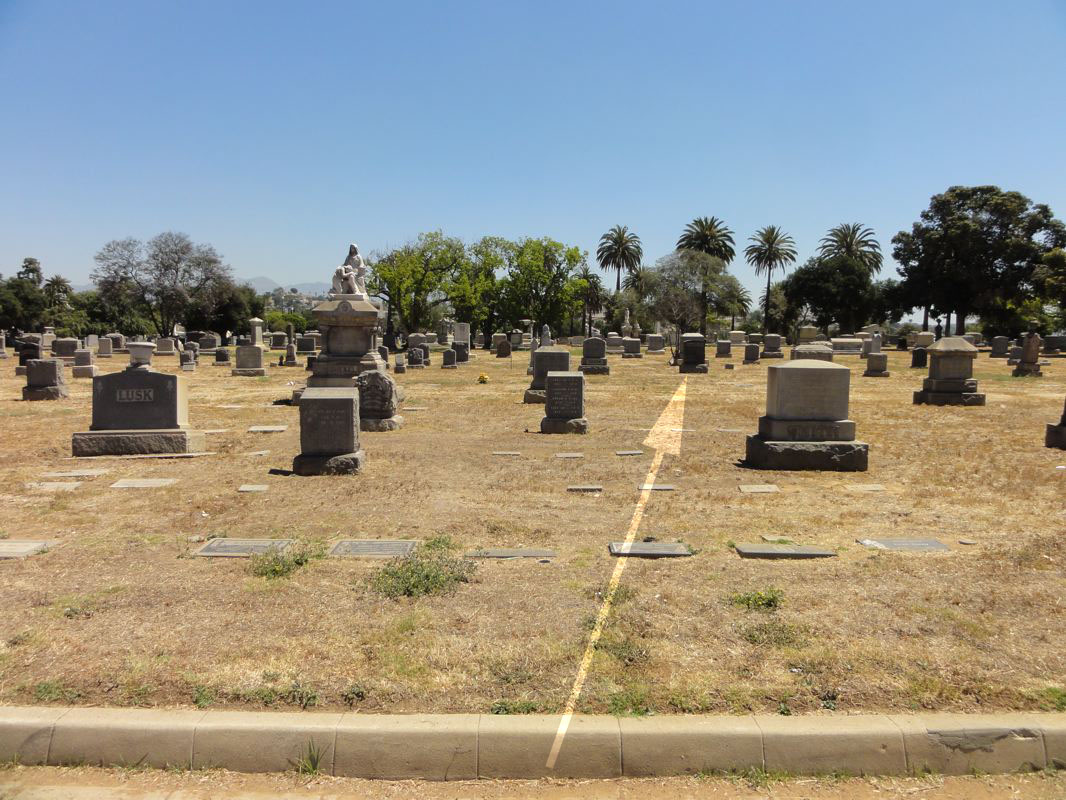 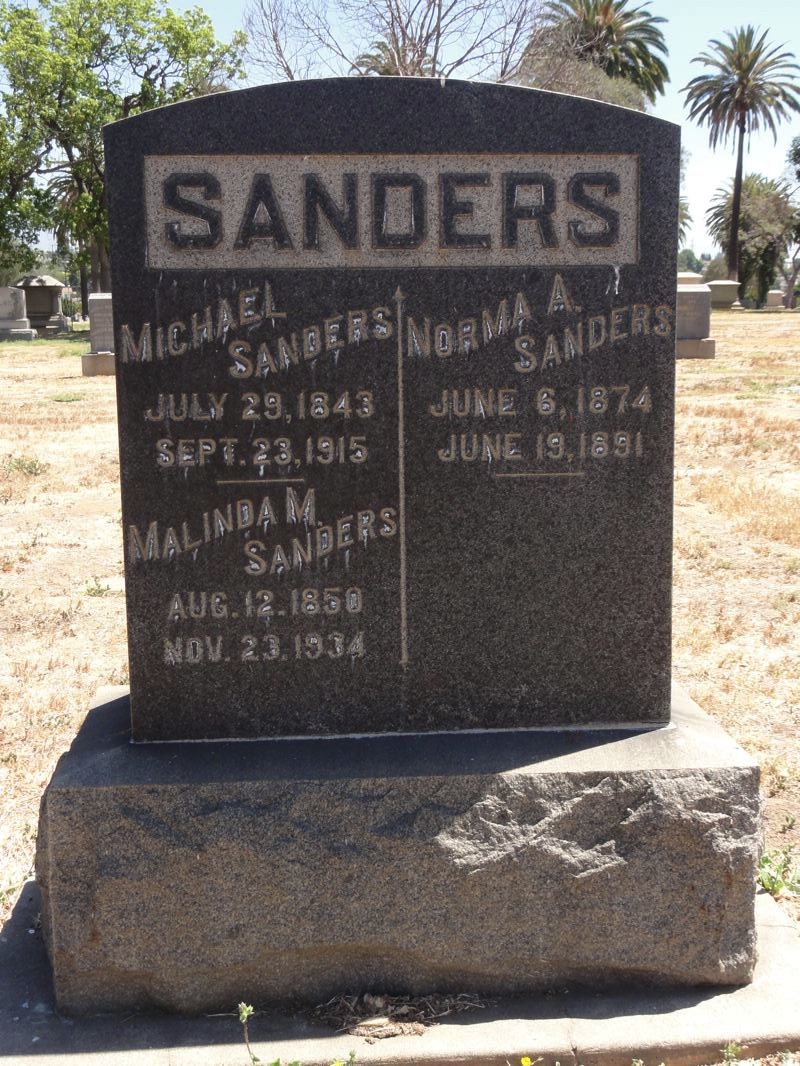 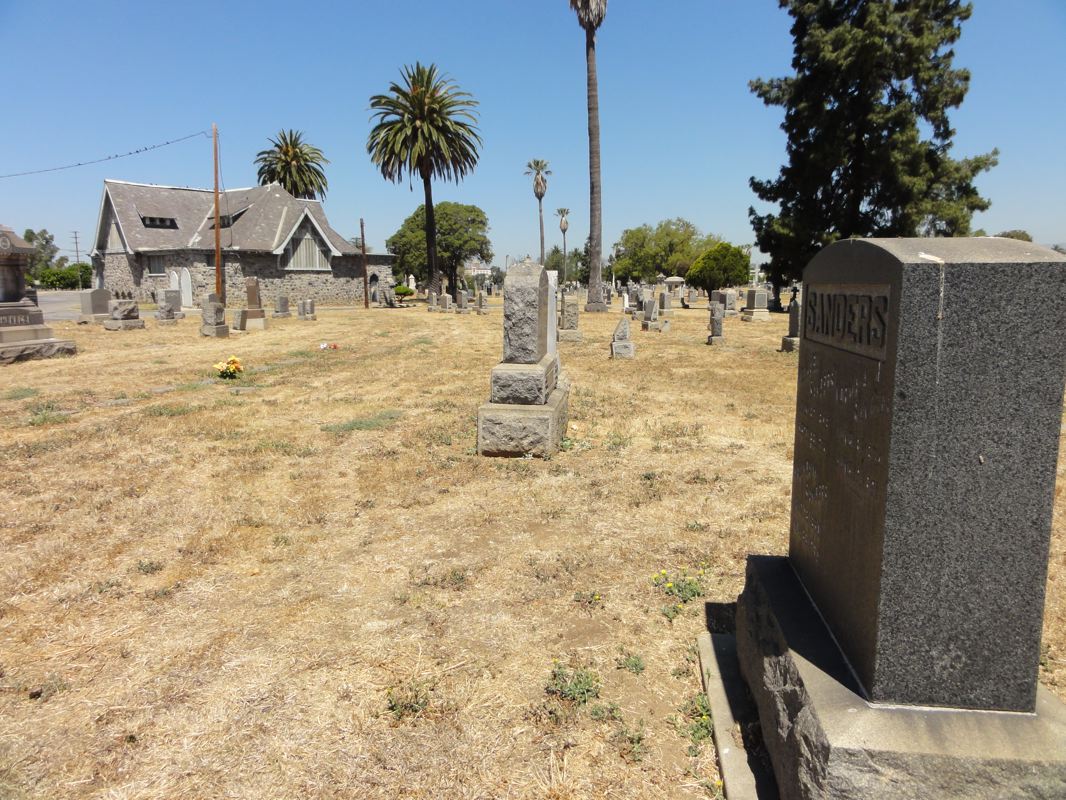 Special Thanks: To Jerry Rushford. I was able to visit in the home of Jerry and Lori Rushford in late June, 2012. I was just returning from a mission trip to the Fiji Islands, and had about a 30 hour layover in Los Angeles. The Rushfords were wonderful hosts, and Jerry was a great resource in assisting me in the finding of the grave of Michael Sanders. If visiting in the Los Angeles area, be sure to visit Pepperdine University in Malibu. Besides having a beautiful campus, be sure to visit the Church of Christ Historical Room, upstairs in the university library. Jerry Rushford has put much work through the years into preserving the history of the churches of Christ on the western coast of the United States of America.