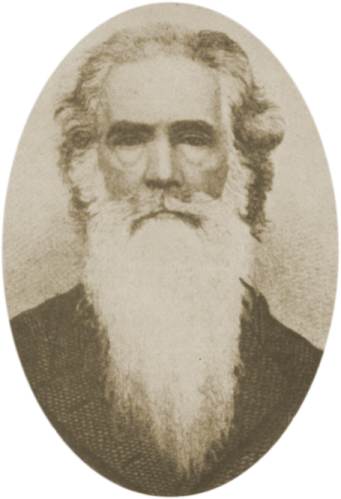 Tolbert Fanning once said: "It is wrong to idolize men; it indicates anything else but Christian regard; but to permit godly persons to pass from earth without reference to their good works is wrong." We should pay due respect to the works and lives of the living who have consecrated themselves to the Lord, but we should not forget to justly honor those who have so labored and loved in the vineyard of the Lord. Death does not end the influence and work of a good man; his works do follow him.

Henry T. Anderson was born in Caroline County, Va., January 27, 1812. His parents were natives of that State and were of the Baptist faith; however, they were liberal in their views. The early training of young Anderson was in harmony, in a large measure, with the simple teachings of the Bible. In his father's home the Bible was a daily textbook, and its teaching had a powerful influence upon the youthful mind of H. T. Anderson. At the age of twenty-one he confessed his faith in his Lord and was baptized by his elder brother. His brother had left the Baptist Church and was only a Christian. Henry T. renewed his prayerful study of the Bible and made rapid progress in developing his spiritual life. He began to preach in May, 1833, about ten months after his baptism.

He remained in Virginia and preached in his native county and surrounding counties until 1837, at which time he moved to Kentucky, and taught school for a number of years in Southern Kentucky. He never ceased to preach the gospel as opportunity was given him. He preached much in Christian and Todd counties. In 1841 he was invited to come to Nashville, Tenn. He accepted the invitation and labored with the congregation in Nashville for several months. Part of this time he made his home with Tolbert Fanning, who lived near Nashville. In 1847 he was called to preach for the Walnut Street Church, Louisville, Ky., and continued his work with that church for six years. After leaving the Walnut Street Church he resumed his teaching and taught successfully in various parts of Kentucky.

In 1861 he began the translation of the New Testament from the Greek into the English language. He gave the best part of his life to this work. He levied tribute on all of the resources of his classical mind and liberal education and gave all to the great task of translating the New Testament. This was the masterpiece of his life's work. He saw from the reading of the Authorized Version that there was a need for this translation, and with a consecrated heart he dedicated his all to the task. He speaks of his work as follows: "The work has been carried on under many adverse circumstances, but, by the good providence of God, it has been completed." He was about three and a half years making this translation. After he had completed it he breathed a prayer of thanksgiving to God for permitting him to finish the task. He sent his translation out with this prayer: "May it go forth, under the divine blessing, to establish and comfort the hearts of those who love the truth." Many scholars have pronounced this translation the best in the English language. Certainly it has many merits and is a monument to the love, scholarship, and prayerful work of a man who loved supremely the word of God. The brotherhood has been blessed and the literature of the disciples of Christ has been enriched by this very valuable contribution in the field of translation.

Henry T. Anderson had a strong mind which was adorned with classical training. His preaching was not so eloquent, but simple and practical. He was no pulpit orator and laid no claims to such, but he was a teacher both in the classroom and in the pulpit. He was no lover of money, but was contented with just enough food and raiment to live upon. Oftentimes, like many other faithful preachers of the gospel then, he struggled through much poverty and suffering. He was very poorly supported both as a teacher and a preacher. It is thought that the brotherhood generally did not know of his deep poverty and necessity of the simple things of life. He did not possess those winning traits of character which draw people very close to him. He was kind and gentle to all, but he was a student. He was so absorbed in his study that he had not time, as he thought, to make and retain friends. Possibly he saw this weakness, but his love for study caused him to neglect the cultivation of the society of his brethren and sisters. He suffered in poverty without complaint. He did not censure the church or his brethren for his poverty. He believed firmly in the word of God. He trusted in God to bring all things to Christ for his own glory and the salvation of his servant. He had firm convictions, and he had the courage to stand by these convictions. He did not believe that a Christian should take vengeance or retaliate. In the prime of his manhood, under the solemn conviction that Christians are not allowed to take vengeance or retaliate, he submitted gracefully to a scourging or whipping from one who had become offended at him. He did not complain, but took the chastisement in the name of the Lord and suffered meekly without any effort to strike back. He had complete mastery of himself. He had the courage and determination to suffer for Christ's sake. Probably no one had a faith more simple and wonderful than did H. T. Anderson. While he was poor with respect to the worldly things of this life, yet he was rich in faith and strong and courageous in his conviction. When he began his translation of the New Testament, he had a large family to support and a very meager salary or income; yet he believed that the Lord would provide. In speaking of his work in translating the New Testament, he said that the Lord did provide and would continue to do so unto the end.

H. T. Anderson was a "man of one book." He studied the Christian religion only; and the Bible, either in Greek or English, was the only book he wanted or would have. He had no desire to study other matters. He may have made a mistake in not studying more in a general way, for near the close of his life he unfortunately gave utterance to some undigested metaphysical conclusions which were held against him. Many made his conclusions a ground of criticism. The enemies of the truth used them as weapons against the truth. If he had given his attention to the study of these questions earlier in life, he would not have made such a blunder, and the enemies would not have had the occasion to turn much of his good life and teaching into weapons against the truth.

He was forced near the close of his life to give his services to the government for bread. He accepted a governmental position of minor importance and went to Washington, D. C., and labored hard for his meat and bread. This was sad, as he desired to give all of his time to the study of the Bible and the teaching of the same to his fellows. He was stricken with disease and suffered extremely before his death. He died in the city of Washington, September 19, 1872. He had a pilgrimage on earth of sixty years, eight months, and eight days. He died in the full assurance of the Christian faith.
–Biographical Sketches of Gospel Preachers, H. Leo Boles, GA c.1932 page 165-169

Directions: From the Northeast end of the National Mall on Constitution Avenue NW, go north on Louisiana Ave. NW and connect with N. Capitol St. NW and head further north. Turn right on Rhode Island Ave. NE (U.S. 1, U.S. 29) and then turn left on Lincoln Rd. NE (Note: Turn may be restricted. May have to pass it and come back to it at a better intersection.) When getting on to Lincoln Rd. you will come to a complex of Cemeteries: Prospect Hill (on left), St. Mary's (on right), and the cemetery you are looking for is Glenwood Cemetery (straight ahead). 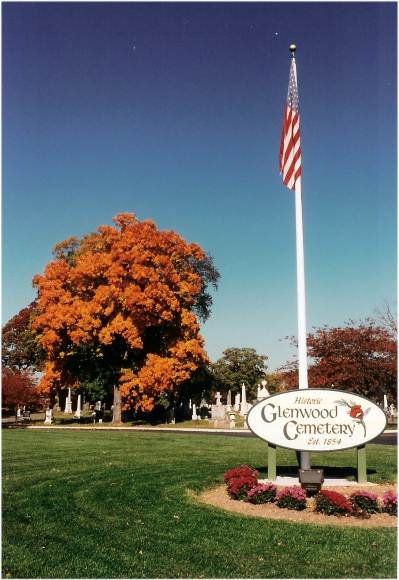 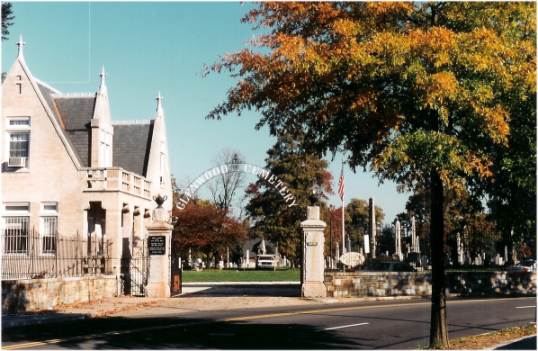 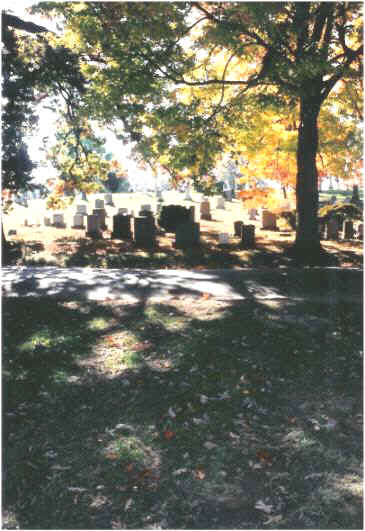 Unmarked Anderson Plot In The Foreground;
Section D In Background
Edge of cemetery is just behind where picture above was taken

Webmaster's Note: Special thanks are extended to Jacquelyn B. Hall of Los Altos, California for providing pictures of the grave location as well as information about the whereabouts of the final resting place of her great great grandfather, H.T. Anderson.