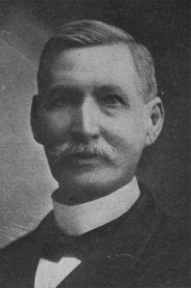 Biographical Sketch On The Life Of B. F. Manire

Benjamin Franklin Manire was born in Bedford County, Tenn., on February 11, 1829. He was the son of John A. and Mary Smith Manire. He was the only child of his mother, and he always referred to her as "the good little mother who sacredly reared and religiously trained" him for the remaining eighteen years of her life. She died in 1847. The parents of B. F. Manire were trained in the Baptist faith. In 1828 the Baptist congregation to which his father and mother belonged laid aside the "Philadelphia Confession of Faith" and took their stand on the New Testament as the all-sufficient rule of faith and worship. The entire congregation at the same time dropped the name "Baptist" and continued to meet and worship as Christians. This was the result of their reading The Christian Baptist, which was published by Alexander Campbell.

Young Manire had the privilege of hearing, during his boyhood days, many faithful gospel preachers: Joshua K. Speer, Ephraim A. Smith, C. F. R. Shehane, Elijah Craig, Willis Hopwood, J. C. Anderson, J. J. Trott, and others of the Tennessee pioneer preachers. At the age of seventeen, in the summer of 1846, he made the good confession under the preaching of J. J. Trott and was baptized by John M. Barnes.

Young Manire began teaching school in Tennessee and taught for a few years. In 1851, at New Lasea, in Maury County, he preached his first sermon. Soon after this, in November, 1851, he was employed to teach a school at the village of Van Buren, in Mississippi. This pioneer village was located on the Tombigbee River, in Itawamba County.

Soon after beginning his work as a teacher in Mississippi, Manire visited the towns of Smithville and Cotton Gin, in Monroe County, and preached at these places. His first preaching in Mississippi met with marked success and gave much encouragement to the few brethren who were worshiping at these places. Among the pioneer preachers in Mississippi with whom Brother Manire labored while teaching at Van Buren, Smithville, and Cotton Gin were Robert Ussery and James A. Butler. Tolbert Fanning had made a trip into Mississippi and had held a successful meeting at Columbus, where Robert Ussery heard the gospel and was baptized by Brother Fanning. On the third, Lord's day in July, 1855, about four years after he had begun preaching, Manire and George Plattenburg were both formally ordained as gospel preachers at Prairie Mount, in Chickasaw County, Miss. There was a large congregation at that place at that time, but there is no congregation there now, I am told.

In February, 1856, be began work as preacher with the congregation in Columbus, Miss.; but in 1857, yielding to the pressing cause for evangelistic work in the surrounding country, he gave up this work and moved his residence to Palo Alto, in Chickasaw County. A splendid school was established there, and Manire became the principal of the school while preaching for the congregation. While he lived at Palo Alto, he preached at Prairie Mount and Aberdeen. He developed rapidly as a preacher of the gospel and his reputation reached throughout the State of Mississippi. At this time he was a co laborer with T. W. Caskey, Dr. J. P. Deanes, Dr. W. H. Hooker, and P. B. Lawson. In 1859 he preached at Union Valley. T. W. Caskey and Robert Ussery had established this congregation in 1849. Union Valley was then in Choctaw County, but is now in Webster County.

In the autumn of 1860, just previous to the beginning of the Civil War, Manire moved from Palo Alto to New Bethel, which became known after the war as "Hemmingway," which was in Carroll County. He moved to this place to become the principal of a flourishing school which had been established there in 1842 by J. W. S. Merrill. He remained at the head of this school throughout the period of the Civil War, teaching nine months in each year. This was one of the very few schools that kept running in Mississippi during the war. Brother Manire was kept busy preaching in destitute places during all this time. In his "Reminiscences" he relates that on one bright Lord's Day afternoon he was baptizing while the battle of Fort Pemberton was raging, only fifteen miles away.

In 1868, Manire gave up his teaching in order to devote more time to preaching. There was a wide mission field in Mississippi, extending from Thyatira, then in DeSoto County, to Battle Springs, in Hyde County, eight miles west of the city of Jackson. The congregations everywhere had been demoralized by the war, and Brother Manire set his heart to the task of rebuilding them and encouraging the people of God to continue faithful to the Lord. He had been promised only voluntary contributions, and his support for the year 1868 was only four hundred and fifty dollars. Out of this amount he had to pay his expenses of travel and support a wife and three children. He made his first visit to Thyatira in February, 1868. His fame had preceded him, and in spite of the inclement weather he had a good hearing and strengthened the church much by his visit.

At the earnest solicitation of the brethren, he continued his mission work in Mississippi during the year 1869. For this year's work he received only five hundred dollars. Early in February be visited the congregations in Wilkinson County for the first time and spent a month with them, preaching at Antioch, Chapel, and Whitesville. He went from house to house, day and night, and often preached three times a day. In the autumn of the same year he made a second visit to these brethren, preached for some time in this county, and doubled the number of members of the congregations. The congregations took on new life and were greatly strengthened both spiritually and in numbers throughout that whole section of the State. He continued his evangelistic work to the close of the year 1872. During this time he had the assistance and encouragement of such preachers as T. W. Caskey, S. R. Jones, W. H. Stewart, B. W. Lauderdale, and W. A. Crum. In 1873 he limited his field of work to the congregations in Carroll and Choctaw counties. In 1875 he preached for the congregations in Lee, Chickasaw, and Monroe counties.

During this time he made his home at Saltillo and conducted a school for seven months each year for three years. At the close of this period he moved to Mayfield, Ky., and preached for the congregation there two years. In the meantime he made preaching tours in Texas, Missouri, Arkansas, and Florida.

Manire and his son-in-law, Mr. Young, purchased a small home in Florida, where he lived until the death of his wife. After her death he spent most of his time in Mississippi, preaching in needy fields as long as he was physically able to travel. In 1896-97 he held successful meetings for congregations in Wilkinson County and at other points in Mississippi. For two or three years he made headquarters in Jackson, Miss., and went out through the country on special preaching tours.

B. F. Manire was preeminently a teaching preacher. For a great portion of his life he had taught school, and he carried much of the habits of a teacher into the pulpit. He used both the deductive and inductive methods of reasoning. It was his earnest desire to instruct and edify his hearers. He always encouraged young preachers. He saw the need of more gospel preachers. He had much to do with instructing and encouraging one of Mississippi's most faithful gospel preachers - Brother Lee Jackson, of Oakland, Miss. He always referred to him affectionately as his "son in the gospel." There was no spirit of jealously in him toward other preachers. He earnestly solicited their help in his field of labor.

At one time, 1871-1876, Brother Manire was Mississippi editor on the Southern Christian Weekly, published by J. M. Pickens at Moulton, Ala. Later he contributed regularly to the Apostolic Church, published by W. L. Butler at Mayfield, Ky.; later he contributed to the Church Register, published by J. C. Creel at Plattsburg, Mo. While Herndon's Quarterly was being published at Columbia, Mo., beginning in 1882, several series of essays by Manire appeared from time to time in that periodical. One series was on "Election;" another, on "The Unity of the Church, or the Body of Christ;" another, on "Spirit Baptism." He also made contributions in his early life to the Christian Preacher, the Christian Review, and the Gospel Advocate. He was ever busy.

He wore himself out in the service of his Master. His sacrifices were great and his labors abundant in his adopted state Mississippi. The present generation should not forget his labors. When he became too feeble to travel and preach, he distributed his splendid library of books and magazines among several young gospel preachers and went to the home of his daughter in Florida, where he died at the age of seventy-six years. He was buried at Hampton, Fla.

Directions To The Grave Of B.F. Manire

In Florida heading south, travel to the city of Gainesville on I-75. Take Exit 77, Hwy. 222 at Mile Marker 390, Gainesville Exit, and turn left (East). Follow Hwy 222 until it runs into State Hwy. 24. Turn left on 24. (At this point you are 18.4 miles from the grave. Go NE on 24 until you get to the township of Waldo. Going through Waldo you will go under a viaduct and bear around to your left until you get to U.S. Hwy 301. Stay to the right and get on Hwy. 301 North. Cross over into Bradford County. Go until you see County Road 221 on the right. Bear off on CR221, and you are 3.4 miles from the grave. You will enter the small township of Hampton, crossing the old RR tracks. After you cross the railroad tracks go 1.3 miles on CR18 and the Hampton Cemetery will be on your right. Park in the grass. The grave is in the center of the old cemetery. 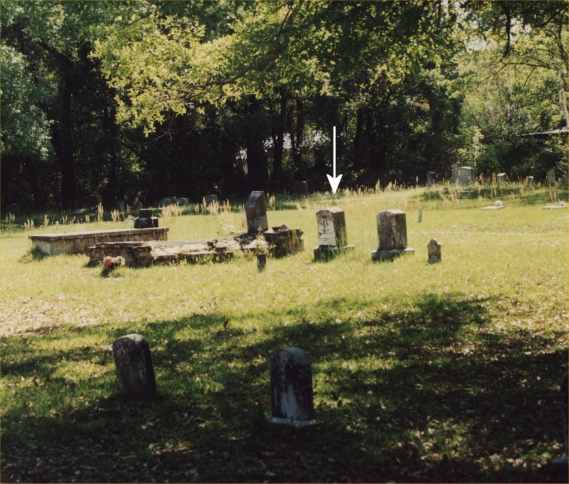 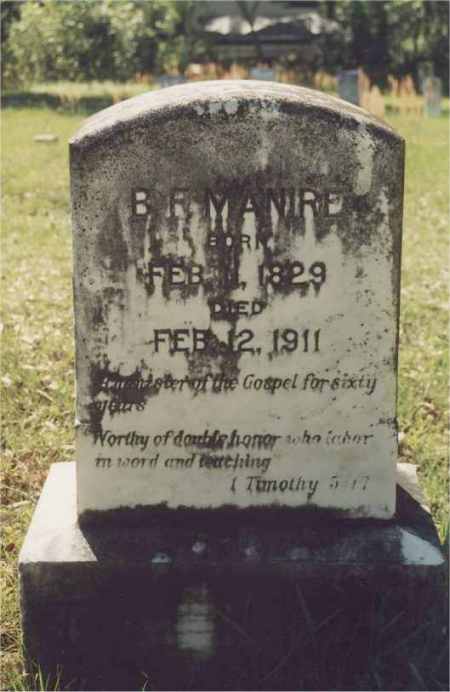