By the middle to late 1820's the influences of the Christian movement were being felt as far south as Georgia. With the writing of the Christian Messenger, Barton W. Stone's influence was strong far and wide. Many of the works that were started and perhaps faded away into oblivion would have never been recorded had it not been for letters written to the Christian Messenger and other journals. In addition, the power and influence of camp meetings were of great significance to the early growth and development of New Testament Christianity on American soil.

One such man and his wife who was influenced by Stone was Arthur and Temperance Dupree. The Duprees owned thousands of acres of land where they labored raising cotton. Located in the north central part of the state, in the Flippen District of Henry County, they had access to various parts of the state where they could teach the message of God to the lost.

In the December, 1828 edition of the Christian Messenger, p.43 a letter from another gospel preacher, James Buy, wrote to Bro. Stone saying,

The work of the Lord is going on in this state, in spite of all the opposition against it. I hear of a good work in many places in the state; but in DeKalb county the Lord is pouring out his spirit in a wonderful manner. Since my last letter, I have immersed near twenty, and expect to-morrow week to immerse twenty more. There was a communion meeting at Bethel Meeting House, in the county about mentioned, which commenced on the 8th of the month, which was attended with good consequences. The number of Elders present was eleven, to which number was added three more . . . Arthur Dupree . . ."

In the January, 1830 issue, p.47, Dupree wrote to The Christian Messenger, stating the beliefs of early disciples in Georgia.

Brother Stone: The brethren and friends of the north western section of this State, having solicited me to inform you of the present situation of the Churches of Christ among us, I have, in compliance with their wishes, been induced to make the following statements:

In the bounds of my circuit there are 23 churches, or congregations. These churches, it is thought, will, upon an average, number 25 members of good standing.

If I am correct in these calculations, and I feel confident that in them I have fallen below the real number of communicants, you will discover our number to be at least 575 church members. With us there are 20 Elders and 6 licensed preachers and exhorters.

We have an annual Conference of the Elders and Preachers. Deacons, delegates, and private, or lay members, present, have the right of participating in all matters, which come before the Conference. Our Conference assumes no authority to legislate - nor does it carry into effect its own resolutions by penal enactments; but by simple recommendations. The powers of the Conference are restricted to the bare regulation of the temporal concerns of the church - nor can it go one step beyond this, without manifest innovations, in which case the members are not bound by any natural or moral tie to submit. Our annual Conference takes place, or rather commences on Friday before the third Sabbath in December, annually.

Our Camp-Meetings commence the last of July, or first of August in every year, and are carried on till the first of the ensuing November at various times and places. They are conducted in the main after the fashion of the Methodist Camp-Meetings.

With regard to doctrine, perhaps I ought not to say anything, for fear it might be said that I exhibit something too near a tie to a confession of faith. But an idea of this kind I as heartily discard as I do any and every confession of faith under the sun, the Bible excepted.

Of this sacred repository of the divine will I think I can say it is the first and the last with the Christians here. We know of no other road to heaven - consequently, we feel disposed to travel along the king's highway till we be passed the borders of all confessions of faith and authoritative creeds.

This book, the Bible, we love, because we do believe in the truth from God. We regard it as the only rule of Christian faith, and consequently we defend it to the last point. Our only source of sorrow is, that we have not sufficient strength to proclaim it out to Christianized Infidels and to heathen lands. Yes, my brother, I feel, as regards myself, willing to spend and be spent in the glorious work of bring back a lost and ruined world to the purer fountain of life, whence flow the clear streams of eternal salvation. But with regard to the doctrine generally taught by our preachers here, and which is, with some slight shades of difference, received by the churches, I can say, they are such as are taught in other States by the Christian Preachers.

We believe in the flrst place, that Jesus Christ is truly and properly the Son of God. Secondly-That he existed with the Father before the world was created. Thirdly-We believe that Jesus Christ, our Saviour, is the CONSTITUTED LORD of all things. We believe in atonement as expressed in your letters, or address to the churches in Kentucky. [A reference to Stone's, An Address to the Christian Churches in Kentucky, Tennessee, and Ohio, On Several Important Doctrines of Religion, published first at Nashville, 1814; 2nd. ed., printed in 1821.] We believe in Baptism by Immersion, after conversion, &c. Our cause in this State is advancing in some neighborhoods rapidly, and in others but slowly. The 3d day of last July I baptized an old lady of 70 years. She had formerly been a Methodist. On the 4th Sabbath of the same month I baptized 4 of the following ages - sister Montgomery 80 - sister Jones 63 - sister Truett 61, and brother Truett 73. It was almost a novel sight to see these persons, bending under accumulated years, submitting at the last stage of life to the great command of Christ. Surely the word of God is powerful. At our Camp-Meeting in Clark, near Scull Shoals, we had a good time. The number of converts I know not, but I think comparatively few. With great respect I remain yours, in the bond of the gospel.

It should be noted that many of the followers of the teachings of Stone, as well as Stone himself, were still striving to throw off the shackles of denominational error. It was not until around 1832 that the Christians/Disciples accepted and taught that immersion was essential to salvation.

In 1832, Arthur Dupree conducted a Camp-Meeting at Republican Church near Skull Shoals in Clarke County (now Oconee). This church was made up of a group of O'Kellyites who had moved into the area from North Carolina. During that camp meeting, Dupree immersed a "large number of converts." One young man in that group, who later played a major role in the development of New Testament Christianity in the state of Georgia, was Nathan Williamson Smith. A few months later, Smith met his wife-to-be, Miss Martha Smith, in a similar camp meeting that Dupree held in Wilkes county.

Dupree and a number of other Christians evangelized throughout the state of Georgia, and were the people who initiated the restoration movement in that state.

Temperance, Dupree's devoted wife, passed away in the 56th year of her life in 1828. Arthur passed just four days shy of his 68th birthday in August, 1841.

In July, 2001, your webmaster went to the Fortson State Archives And Records Building on Capitol Ave. downtown Atlanta. There the location of the final resting place of Arthur Dupree was kept on microfilm. Much to my delight I found it was within 20 miles of my home. However, all I had was a document recorded in 1950 stating that the Dupree family cemetery was on Hickory Flats Road in the Flippen District of Henry County. There was only one problem, no such road existed on maps in 2001. So, knocking on doors and calling businesses in the Flippen District, information came that a new school was built on Brannon Road called Hickory Flats School. Could it be that Hickory Flats School was located on what was once called Hickory Flats Road? Well, the only way to find out was to go there and knock doors in the area. An initial trip over in the area brought little fruit. However I came home and got on the internet and looked up cemeteries in Henry County on a geneological site, and found that indeed the small family cemetery was on Brannon Rd. So back to Brannon Road we headed. The info we had said that it was a small cemetery on the property of 1320 Brannon Rd. just north of Springdale Drive. The present owner of the property is a Mr. Jeff Degen.

Not quickly locating the cemetery, my daughter Rebecca and I went up the long driveway to a home set back into the heavily wooded area. As we drew nearer the house, out of the corner of our eyes we saw an old dilapidated house surrounded by thick underbrush. It was almost eerie. Was this the old home place of Arthur and Temperance Dupree? Mr. Degan was not sure, but was very helpful in locating the little graveyard back up next to the road in a heavily wooded area. I was amazed at how the granite stones had been preserved through the years.

South of Atlanta, Georgia on I-75 take Exit 224, Hudson Bridge Road exit and head left (east). Travel until Hudson Bridge dead ends into Hwy. 42/23. Turn right on Hwy. 42/23. Very shortly turn left on Brannon Rd. Go about a mile and just before Springdale Rd. to your left is 1320 Brannon Rd. Pull into the driveway and stop immediately. Go into the woods between you and Springdale Rd. It will be about 25 feet into the woods. You can not see the graveyard easily from the street, though it is less than 30 feet from the road. It is covered by thick undergrowth, but you can get in with little trouble. (Now you may leave with a few Georgia Red Bugs when you leave, but you won't have any trouble getting to the graves.) There are only five graves in the cemetery. 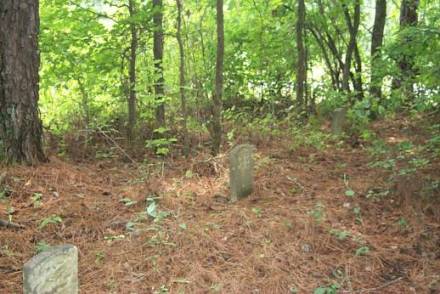 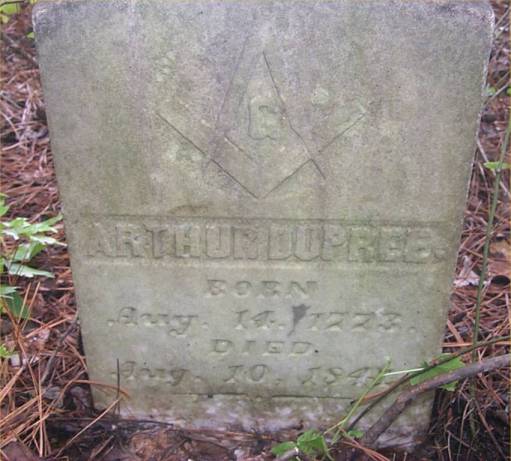 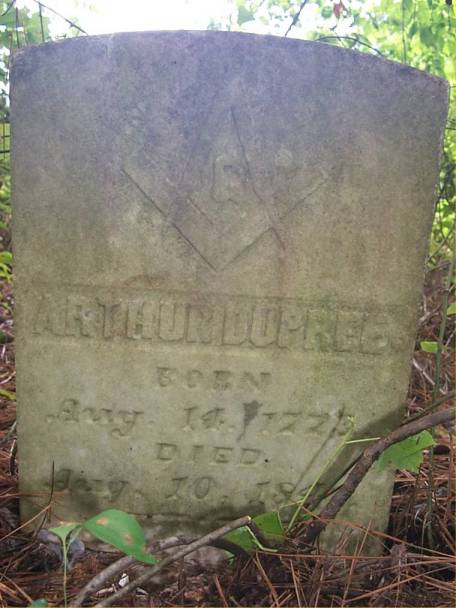 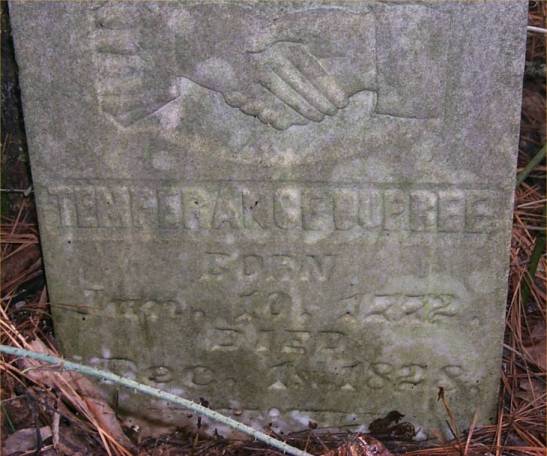 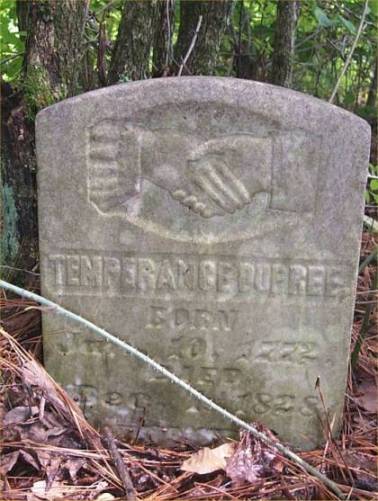