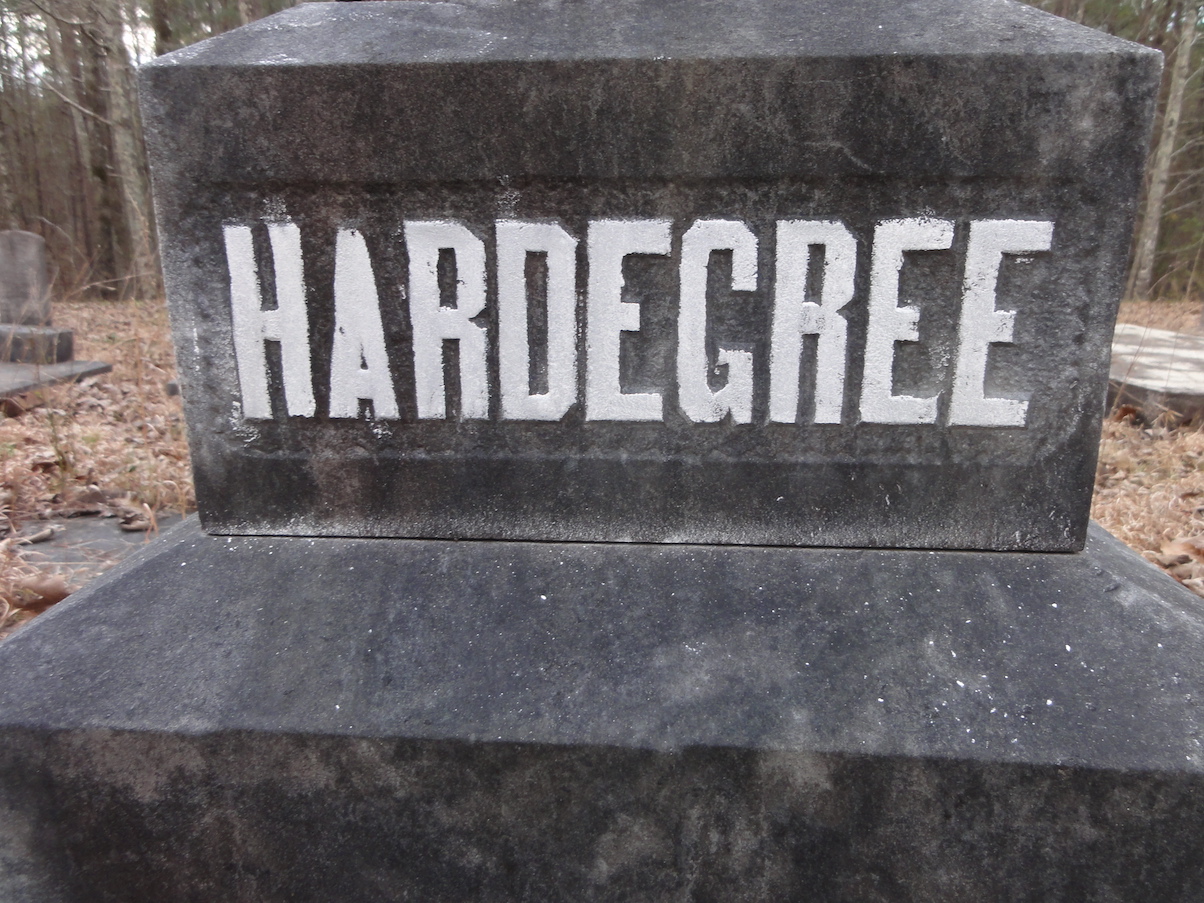 The Life of Zachariah Hardegree

One of the earliest churches of Christ in Georgia, if not the earliest, was establish in 1807 in the southwestern part of Clarke County, now Oconee County, on Scull Shoals. It was located about 16 miles from Athens, Georgia.  Historian Edward J. Moseley wrote, "The little group was composed of immigrants from North Carolina. The new Georgians transplanted their faith, being known as "O'Kellyites," that is, Republican Methodists who had abandoned nonscriptural divisive practices. Consequently, the congregation, now Antioch, was called Republican Church for some years." (Disciples of Christ in Georgia, p.63) From this small group came several preachers, like Nathan W. Smith (1813-1899), Joel B. Hardegree (1808-1870), and Zachariah "Zack" Hardegree.

Some of the earliest families of this group were the Jonathan Hardegree family who had moved down from Oglethorpe County, Georgia. His son by his first wife, Martha "Patsy" Cameron (1776-1814), Joel, preached the gospel, and at one time became "district evangelist" in Oconee County (Moseley, p.308). Eighteen years Joel's junior, his stepbrother Zachariah, also preached. The following comes from an more extensive work that was found on Genealogy.com. It reports,

"Elder Zack Hardegree, who lived on a farm in Heard County, joining Hollingsworth Ferry on the east side of the Chattahoochee River, founded Antioch Church in Heard County by donating one acre of land and the timber for the building. This church is now abandoned and the surviving members have merged with the Westview Christian Church in Newnan.

"Like other ministers of his day he preached for years consistently at some home, school house, or church throughout the Western District of Georgia. Some places mentioned include residence of John Causey in Clem. Burns school house often, Ephesus, Enon Grove and New Bethel Church.

"Since roads were in too poor condition to use a vehicle, he usually rode horseback to his appointments. In the "Carroll Free Press" for February 2, 1888, the reporter related an interesting fact: "Elder Hardegree, that good old man and zealous preacher of the gospel, who was reported dead some time ago, filled his regular appointment at New Bethel, Saturday and Sunday. I was not present myself, but those that heard him say that he preached as good discourses as they ever heard him before. I expected he was somewhat surprised to read his own obituary a few weeks ago." (Note: Correction - This news item was in the February 17th edition of The Carroll Free Press, page 2, SDH) 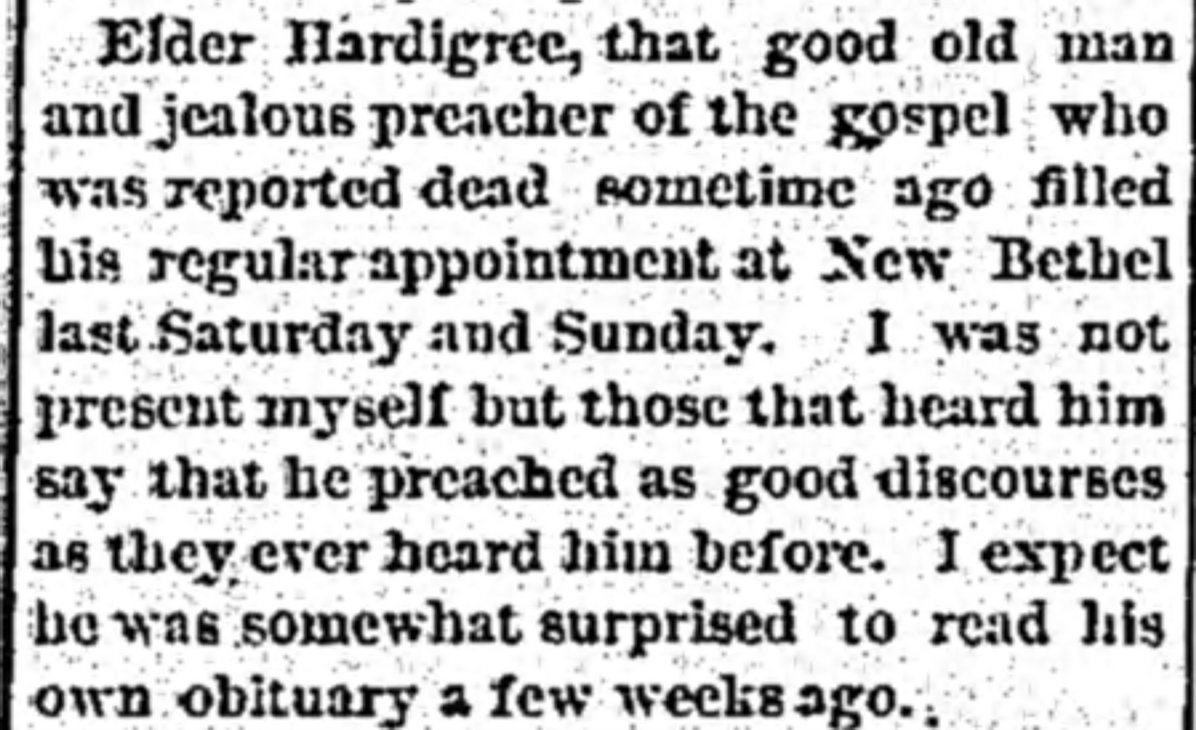 "Elder Hardegree, born December 10th, 1822, died April 30th, 1902 and was buried in the Hardegree Family Cemetery which then was near the first house beyond Hollingsworth's Ferry on the road toward Lowell. (The ferry is no longer there.)

"In the "Yearbook of Disciples of Christ" he gave his address as Yellow Dirt, which was a post office some two miles on the west side of the Chattahoochee River. He had to cross the ferry to go for his mail. (http://freepages.genealogy.rootsweb.com/~jcook/hardegree.htm [hardegree 803.FTW])

"Zachariah enlisted in the Confederate Army on March 4, 1862. He was a Private in Co. I, 41 Regiment. Surrendered at Greensboro N.C. on April 26, 1865. Jeremiah Hawk was also in the same Regiment with Zachariah. (See Jeremiah M. Hawk notes. I also have a date of birth for Zach being 12-10-1822 from History of Heard County by Lynda S. Eller) (NOTE: See newspaper clipping below that states he never killed or even shot anyone during the war. This story was shared in newpapers all around the country. SDH)

"Zachariah worked as a farmer and preacher of Liberty Christian Church near Newnan, Ga. He was on the 1891 tax digest of Heard Co. with sons Jonathan H., Thomas F., and James D. in Enon Grove District.

"One little story his Granddaughter Zella told about Zachariah was that he would leave the house without leaving any stove wood to cook with. So one day his wife put the food on a rock between Aunt Zula's (Missouri Angeline) room and the kitchen where the sun could hit it. After that, he never went off again without leaving wood to cook with. (Hardigree Family History by N. Lemons)"

Reports on this page (below) show that brother Hardegree was a faithful minister of the gospel in the Christian church (churches of Christ) in the region where he lived.

He passed from this life, April 30, 1902, and was buried in the Hardegree Family Cemetery in Heard County, just east of the Chattahoochie River. 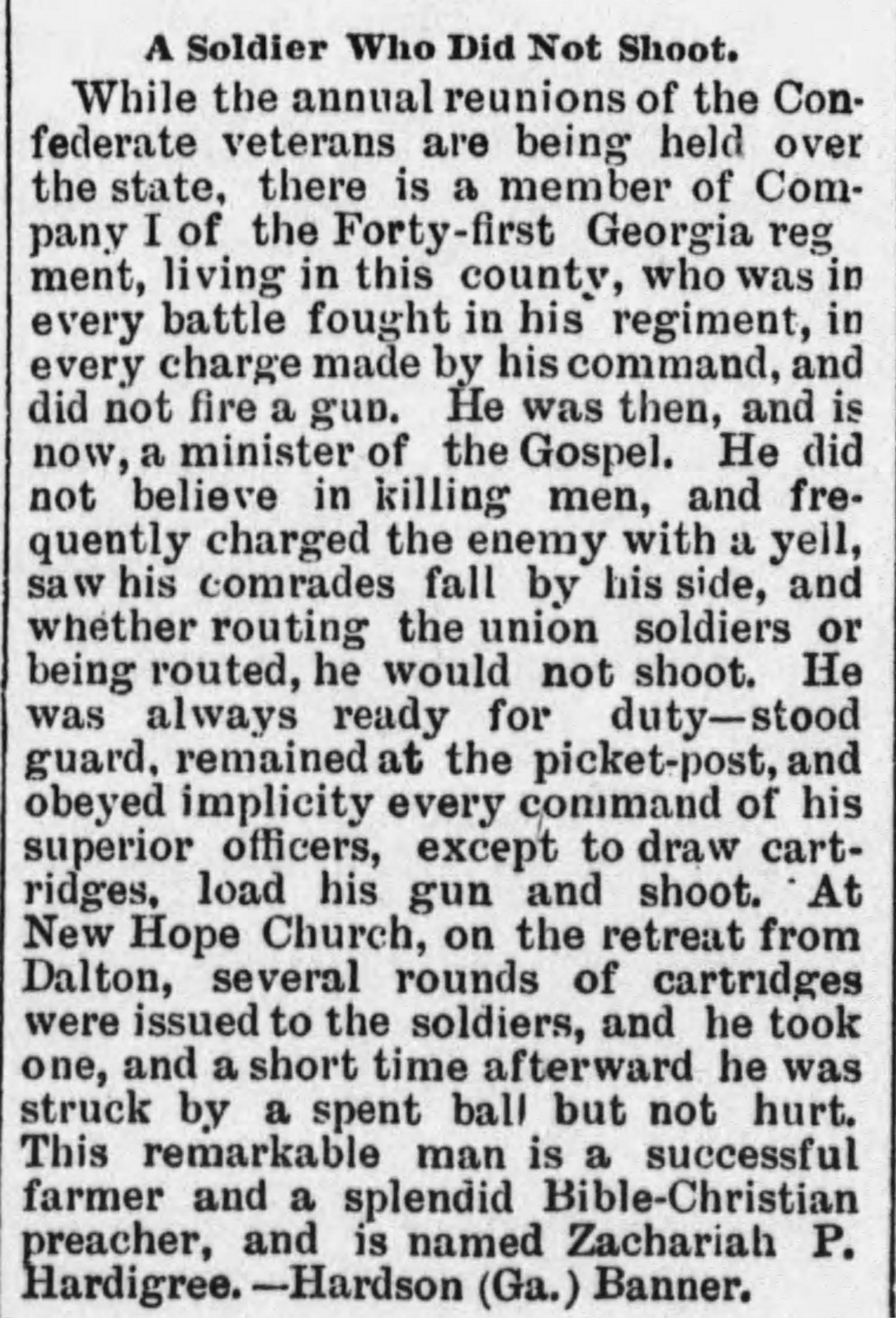 Local Newspaper Report On Happenings In The West Georgia Area - 1886

Reports In The Gospel Advocate 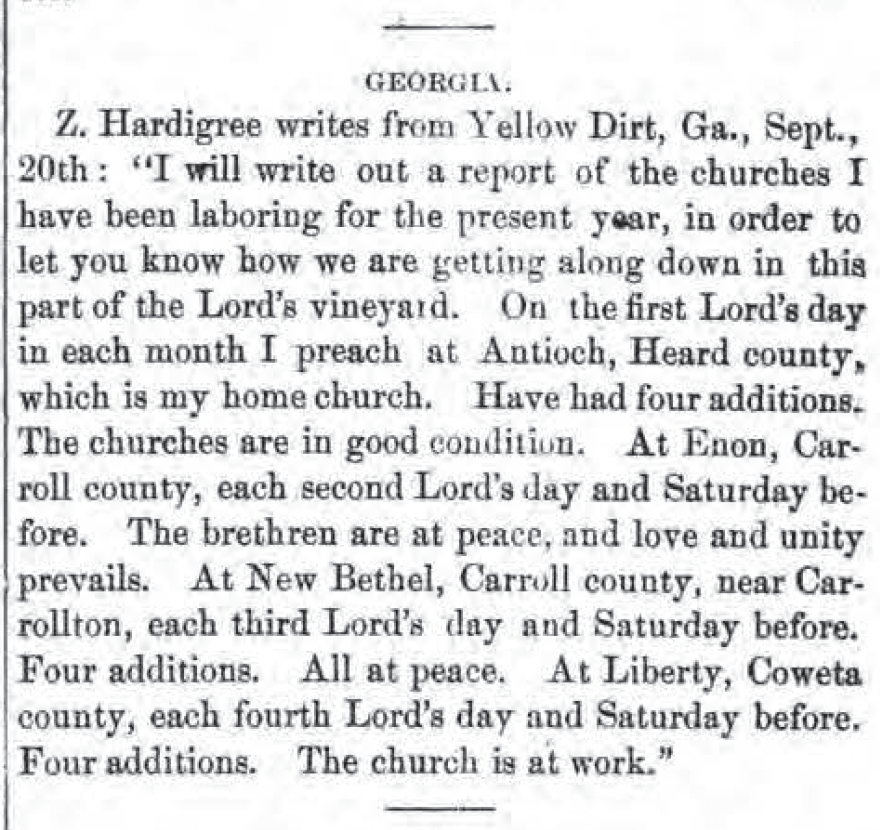 I have thought for a good while of writing a few scraps from Georgia. Protracted meeting season has come round again. But I have not had the pleasure of attending many of them, and therefore I have but little church news. I was with Bro. Z. Hardigree at a place called Enon, in this (Carroll) county, but left the meeting Sunday evening (the 2d Lord's Day inst.) He did some good preaching—had a good hearing and the last I heard from the meeting there were six additions.

Bro. Hardigree is one of our best cornfield preachers, he wields the sword of the Spirit with great force, rightly dividing the word of truth,— in a word I think he is doing much good for the cause in this section. I am sorry to say it, but. I fear that many of our preachers have chosen preaching as an occupation, and hence too often hear them say, I won't preach unless you pay me, whereas I think, a man who won't preach without pay is not fit to preach. I think the man that has the cause at heart, will preach all he can whether he gets pay or not, and I can't help but think, if our preachers would try as hard to get the brethren to sustain the cause as they did in days of the apostles that is according to the Jerusalem plan, that they would succeed much better than they do. But alas!  Our brethren in Georgia, as well as elsewhere, "want to be like the nations around them," and therefore ''must have a king," or some centralization of power to control the church. They seem to forget. that the scriptures contain, all things that "pertain to life and godliness." "But no marvel" for the church very soon forgot their allegiance to Christ, the (only law giver) and began to add the works of men, to the laws and institutions of God, and hence the man of sin—the son of perdition. But let us thank God and take courage the truth is mighty and will prevail.

We have a few sound preachers in Georgia, that will not bow to Baal, nor to any man-made calf, and I see from the reading of GOSPEL ADVOCATE that there are many and the number still increasing) throughout the United States that are still holding on to the word of God, as the only rule of faith and practice. Then "let us who are of the day be sober, be wise as serpent and harmless as doves."

I want to say, in conclusion, that I am still hoping and praying that the day will soon come, that the children of God will cease to cripple their energies by their strife and divisions, and "will be of the same mind speak the same things, and present one mighty phalanx against the enemy of souls. To God be all the praise, honor and glory, now and forever, Amen!
-John Tillery, Plowshare, Ga.

The Hardegree Family Cemetery is located in the western part of Georgia near the Chattahoochie River. In Heard county, the grave yard is very remote. Obviously, from my visit in 2015 it continues to be kept up, and at least cleared from time to time. It is located on Ferry Road, and it has probably been many years since a ferry was in place to take people across the river. However, the best way to get there is south of Atlanta, take I-85 to Newnan and head west on Hwy 34. Take the 34 Bypass to Welcome Rd., and turn right. Go several miles on the name of the road will change to Handy Rd., and then change again to Martin Girl Rd. Finally, you will turn right on Sellers Road. Pass Antioch Baptist Church. Sellers Road will dead end into Ferry Road. Turn right and pull over soon and head out into the Georgia Pines down into a Pine thicket road. You'll come to a cattle gate. You will see the cemetery in the distance. Note: When I visited, several new homes were being built in the area. Some of these directions will probably change over the years. 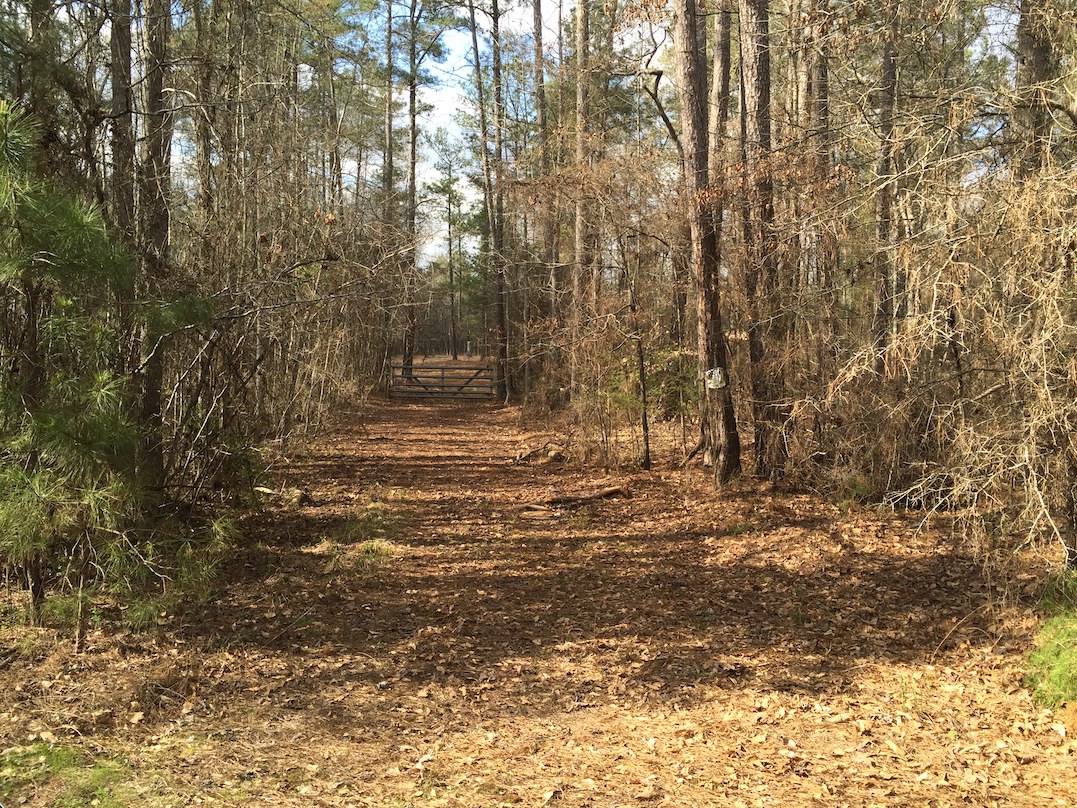 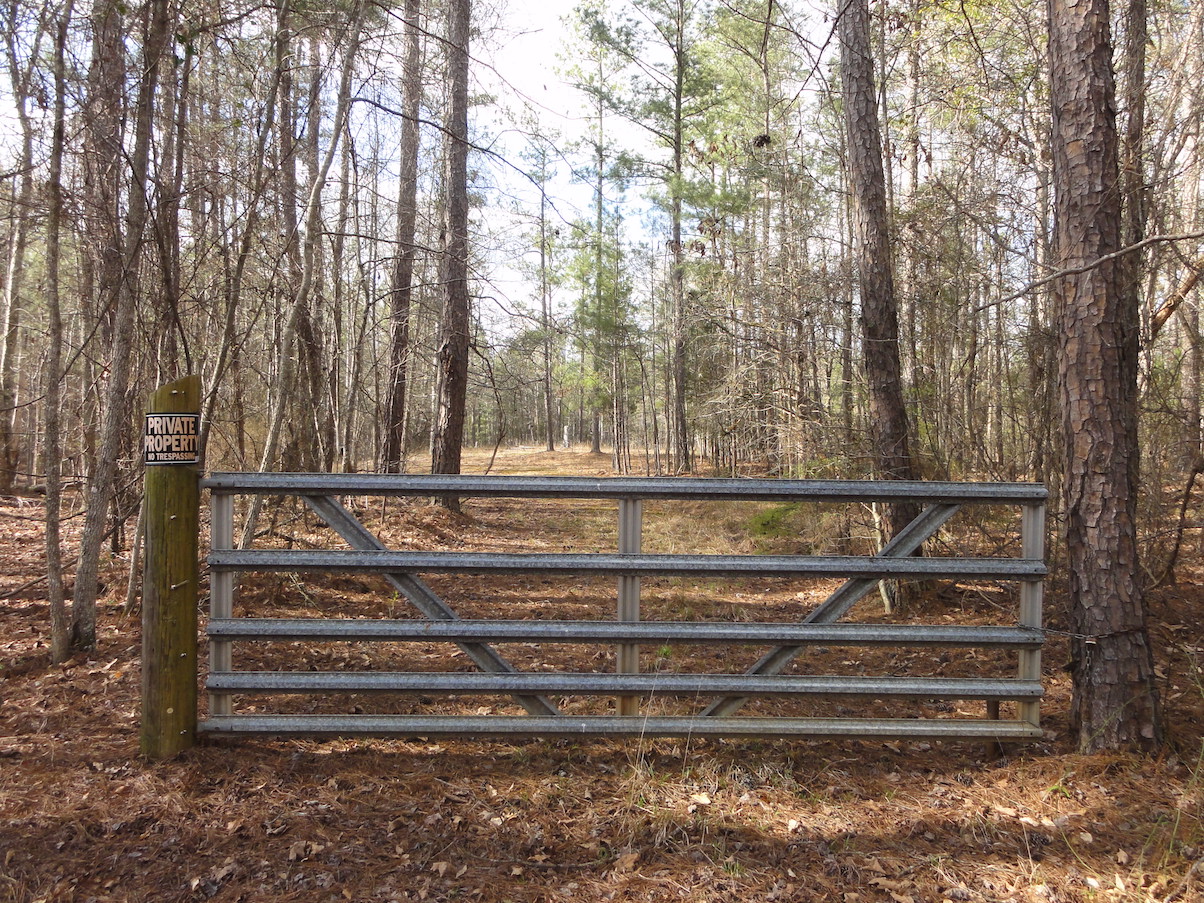 Note the "No Trespassing" Sign - Georgia law prevents restricting access to cemeteries. With no info on
contacting property owners my visit was short. 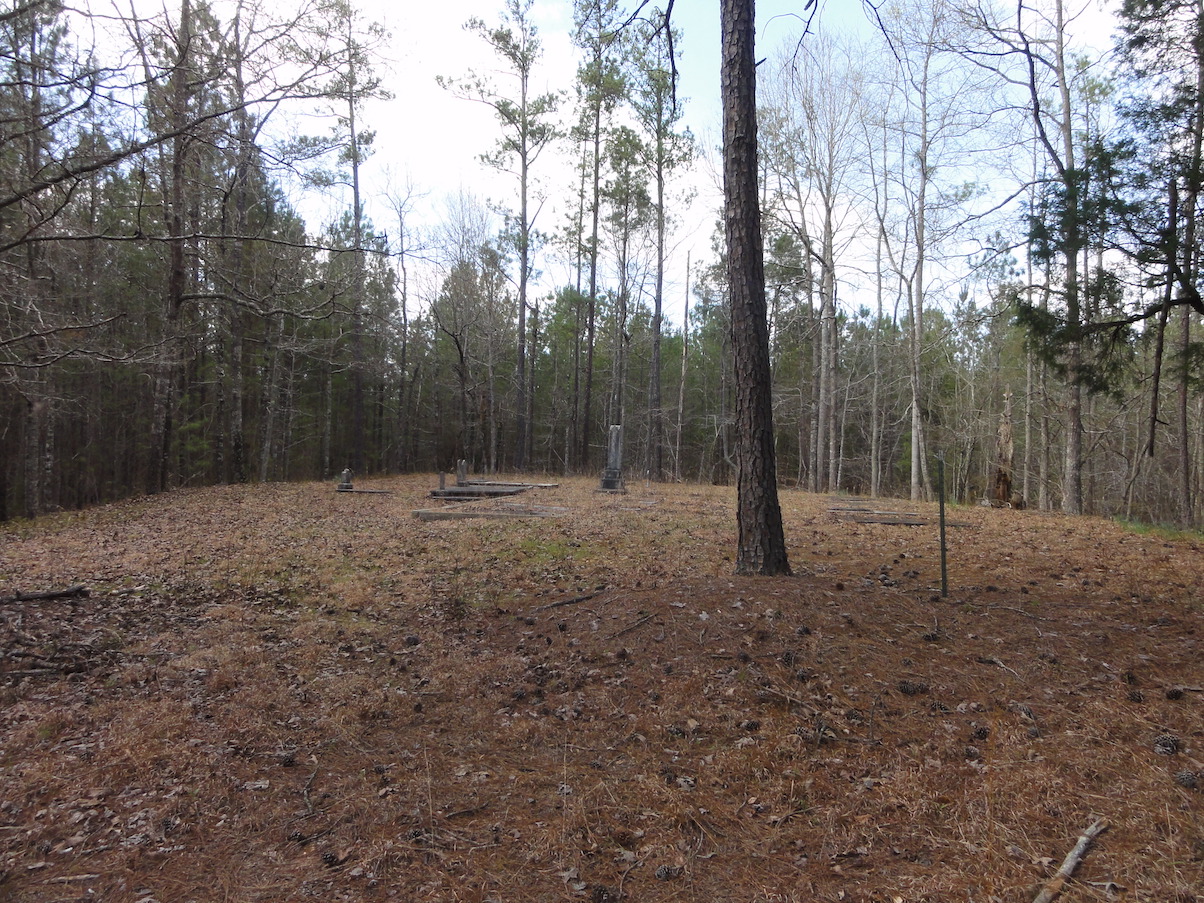 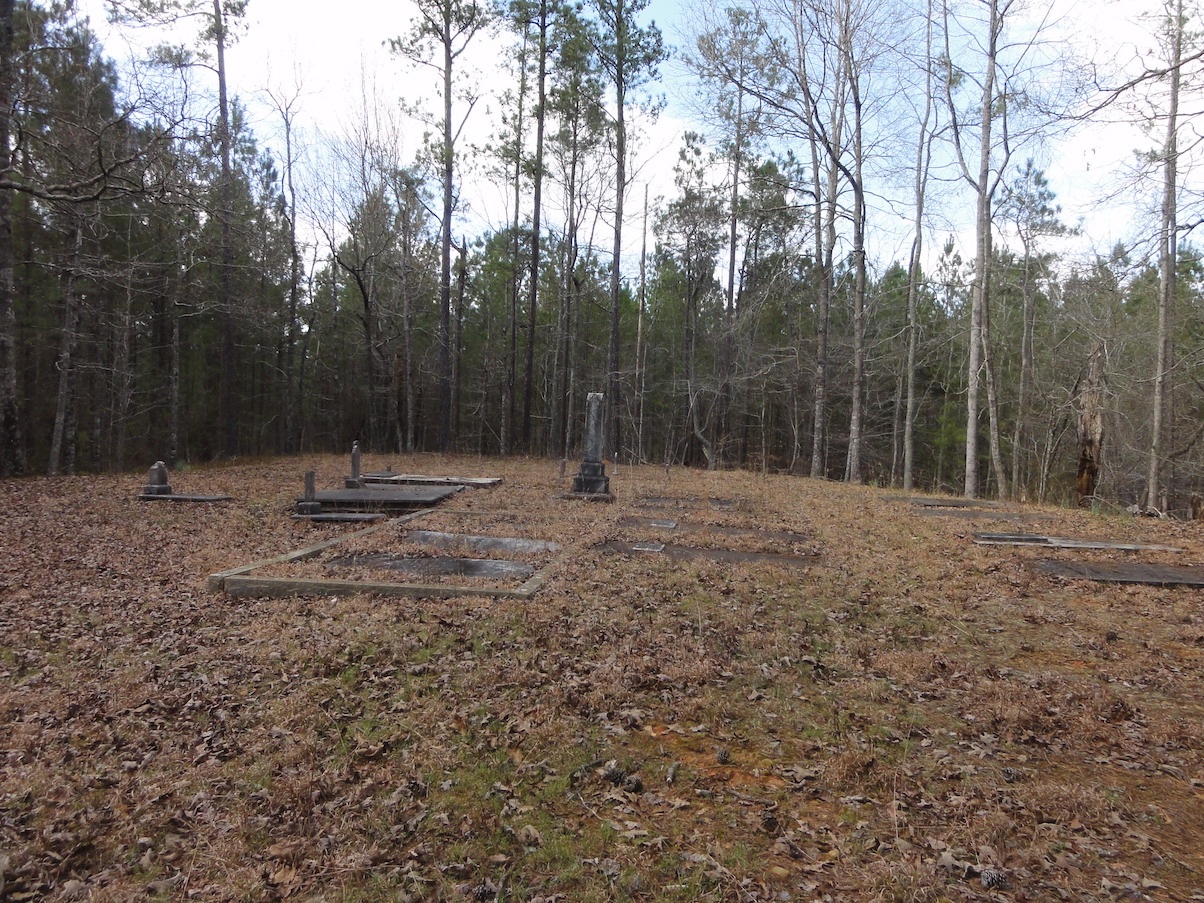 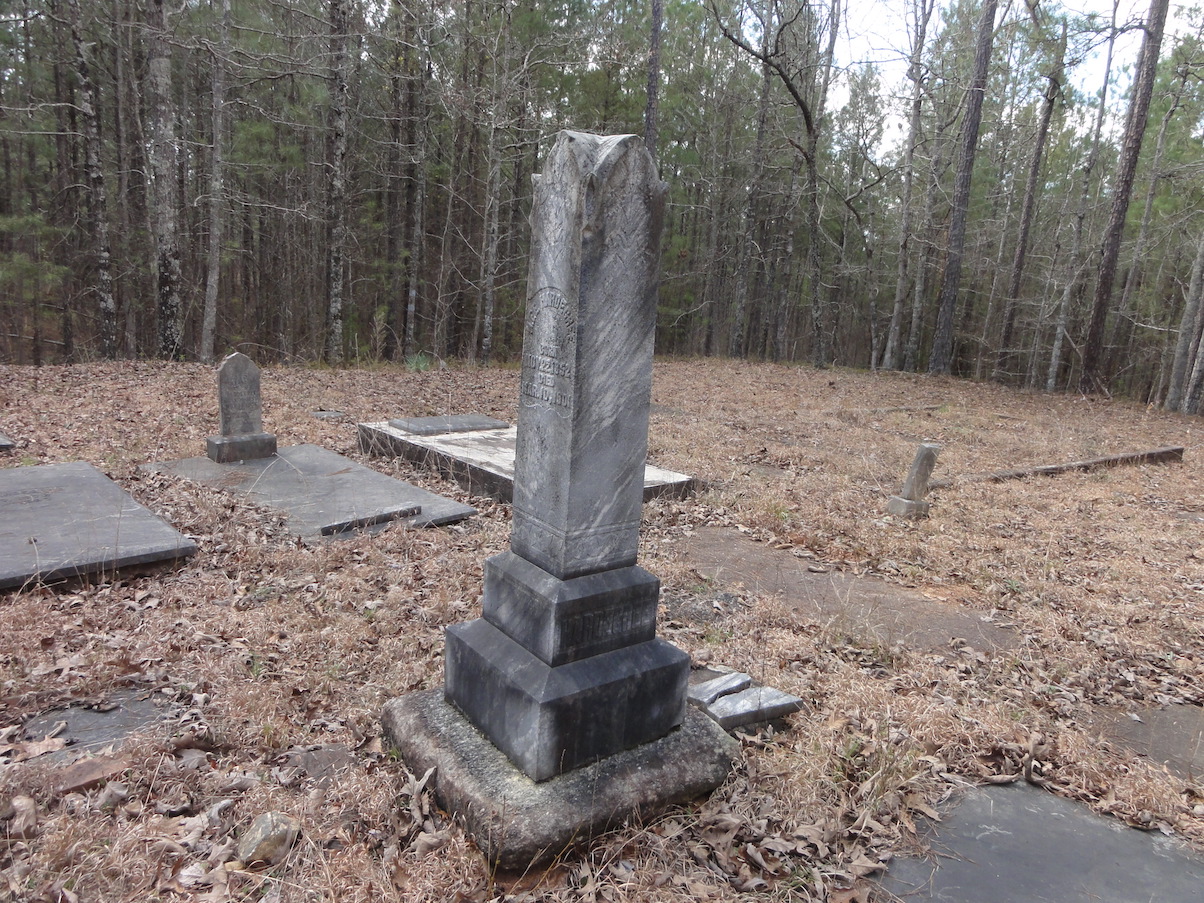 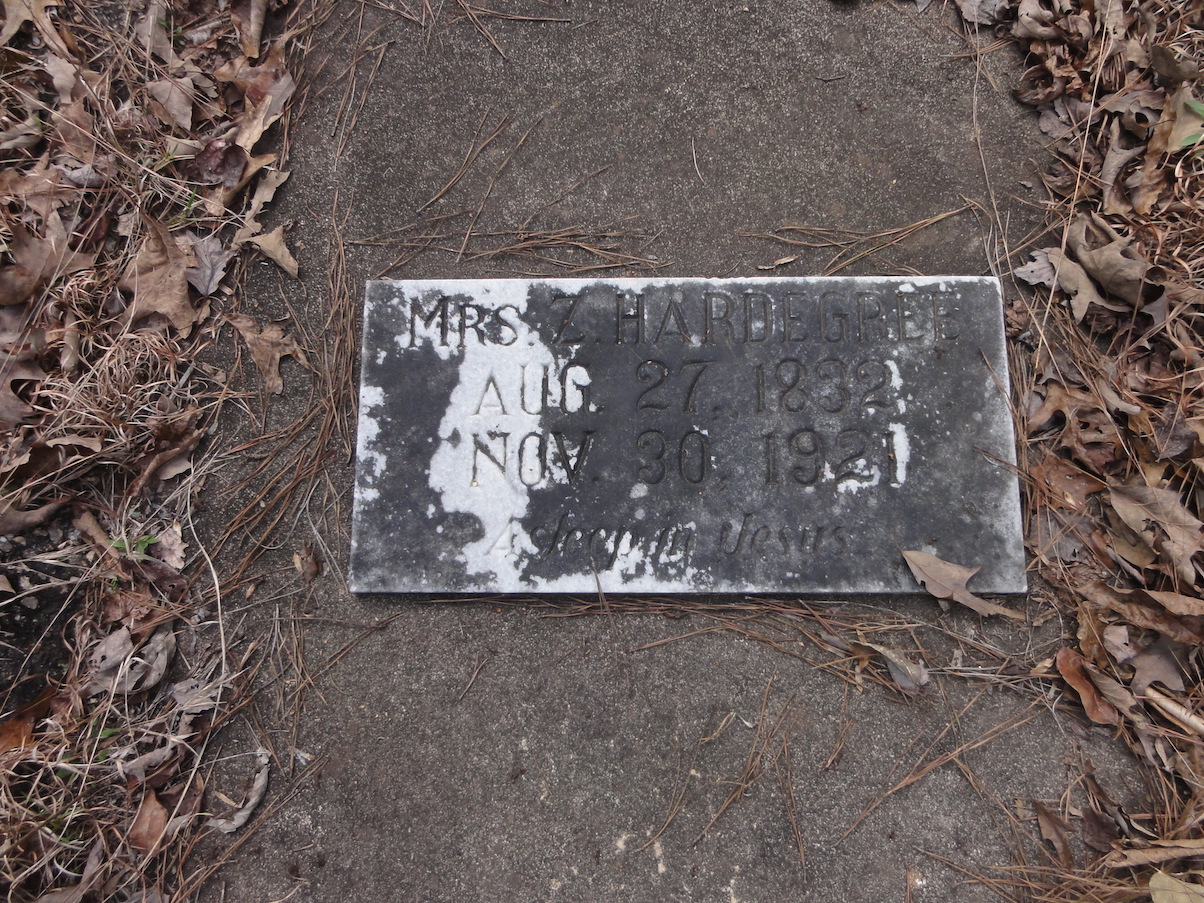 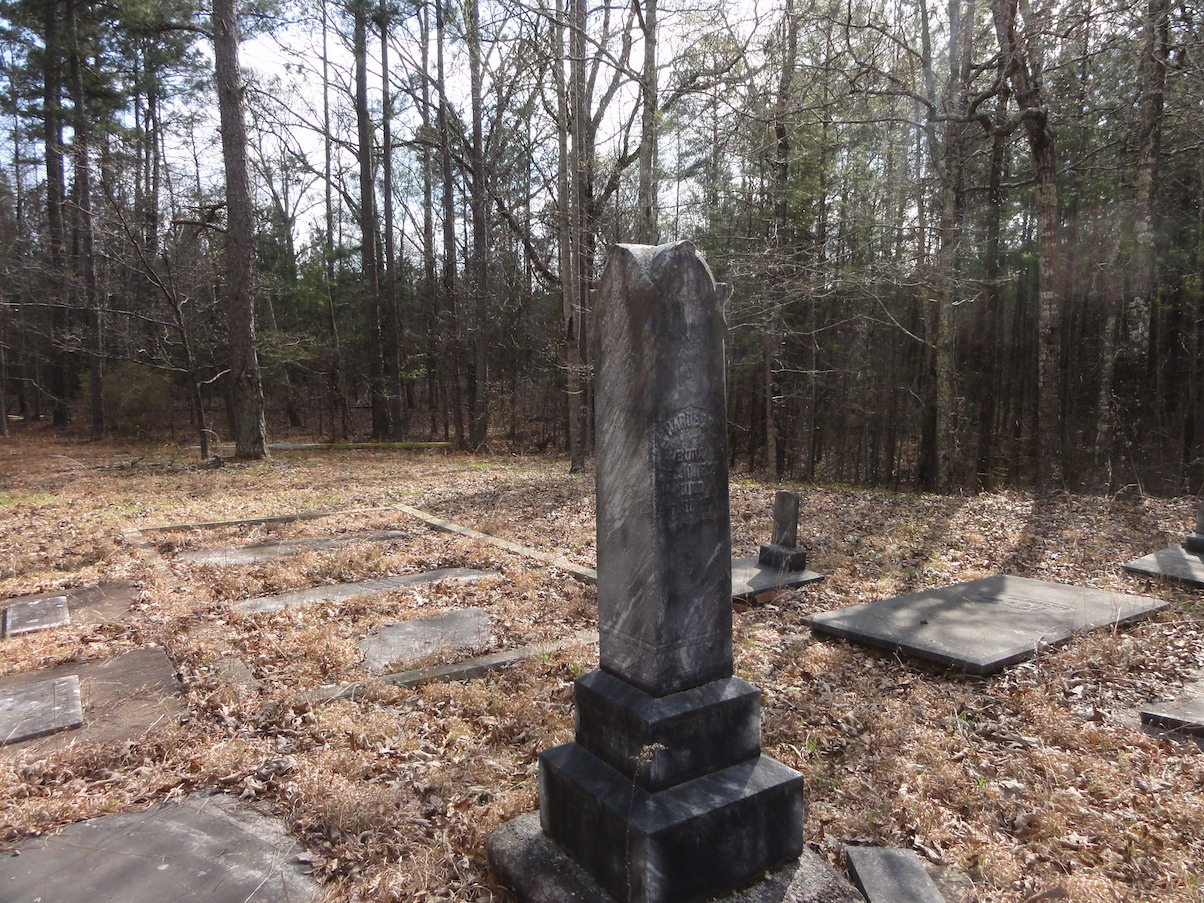 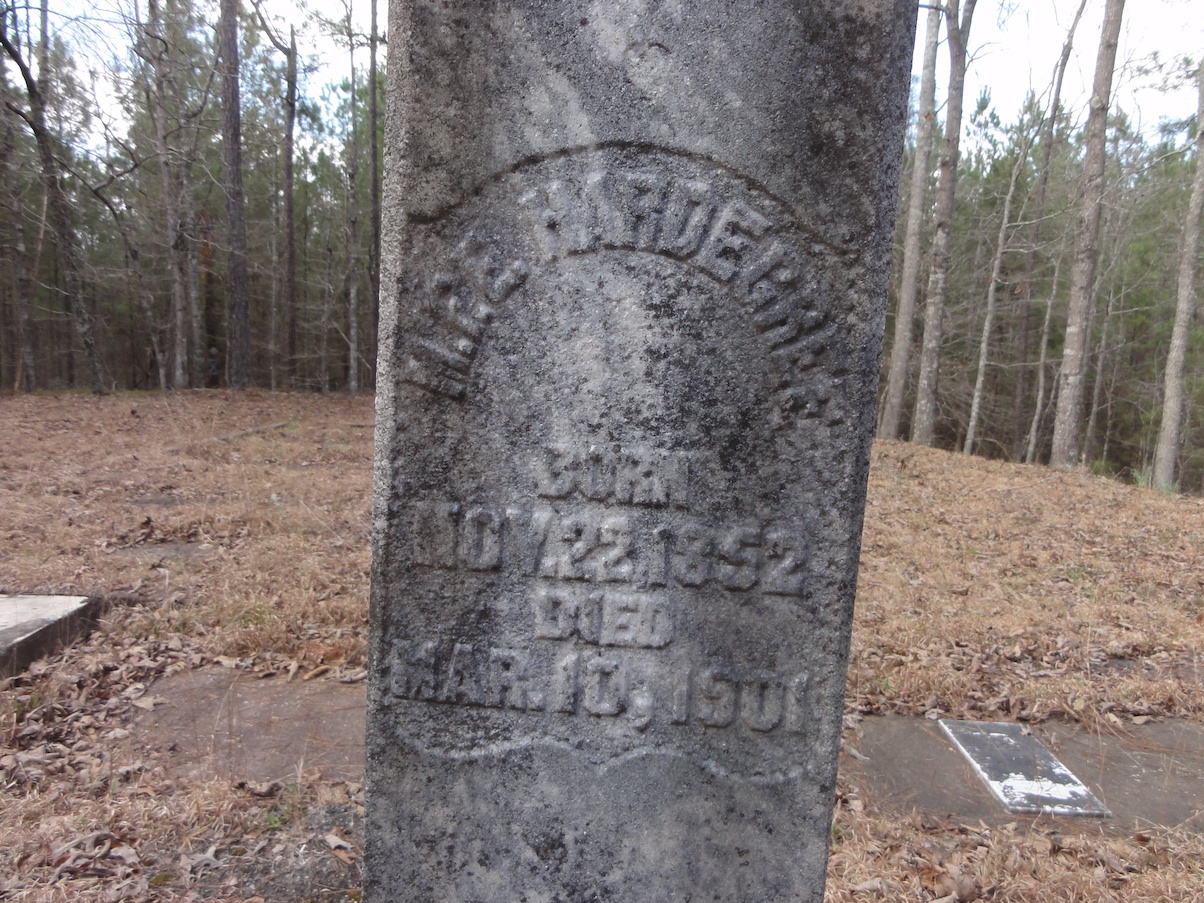 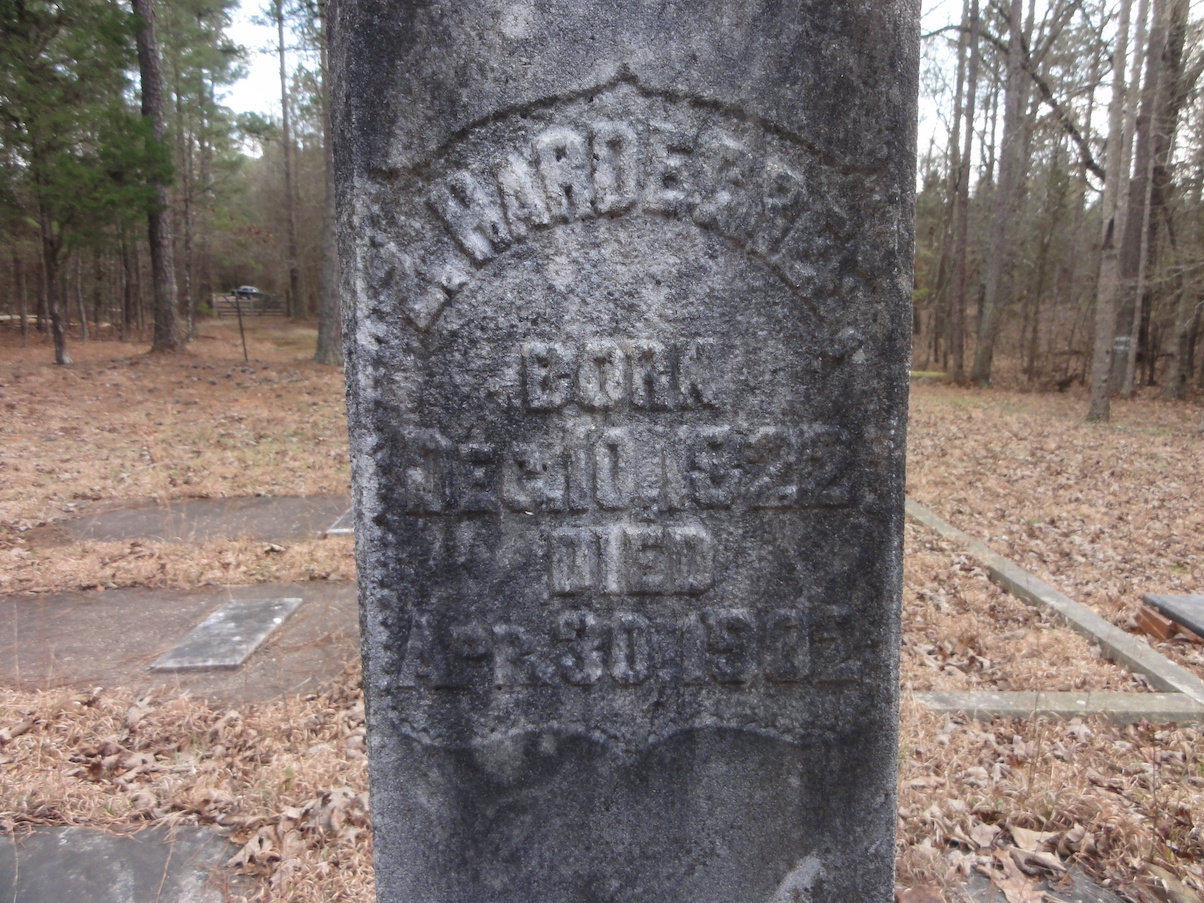 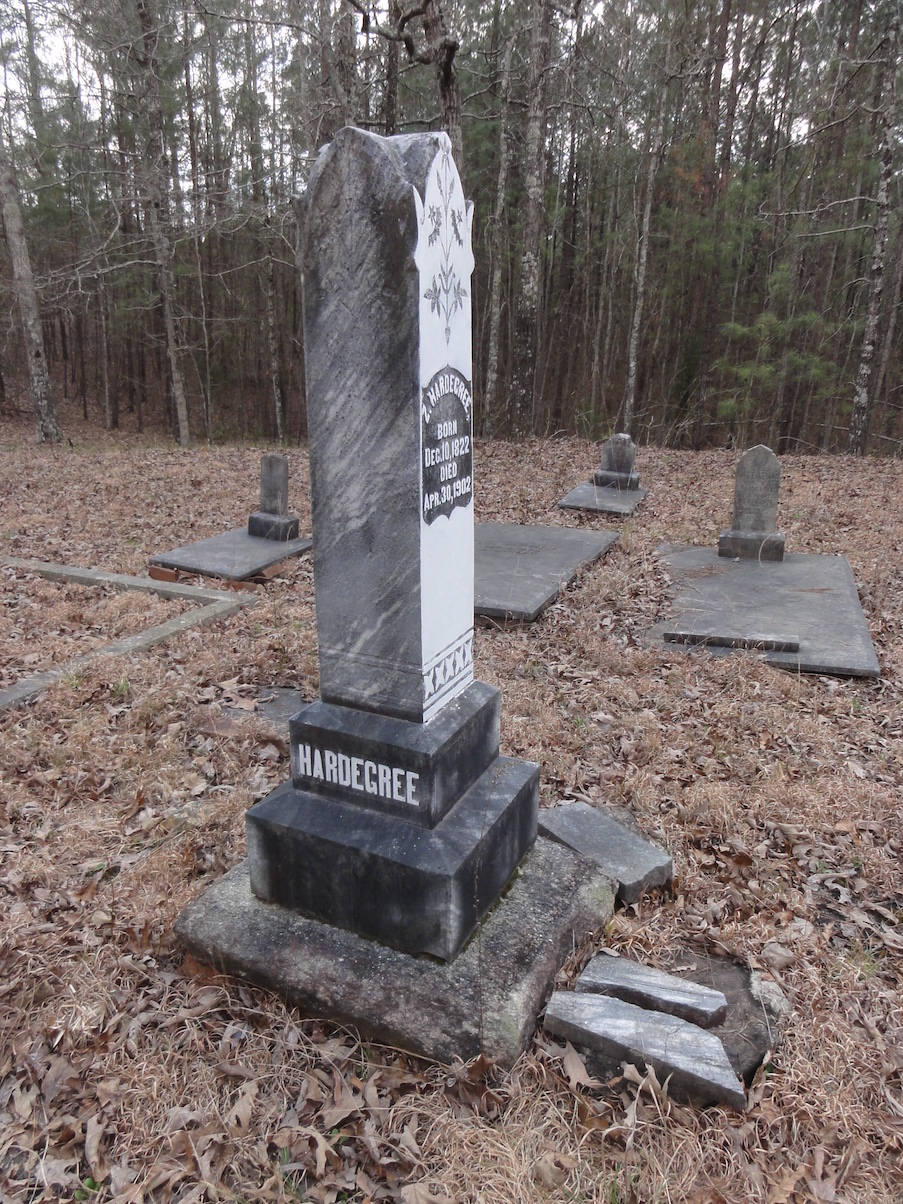 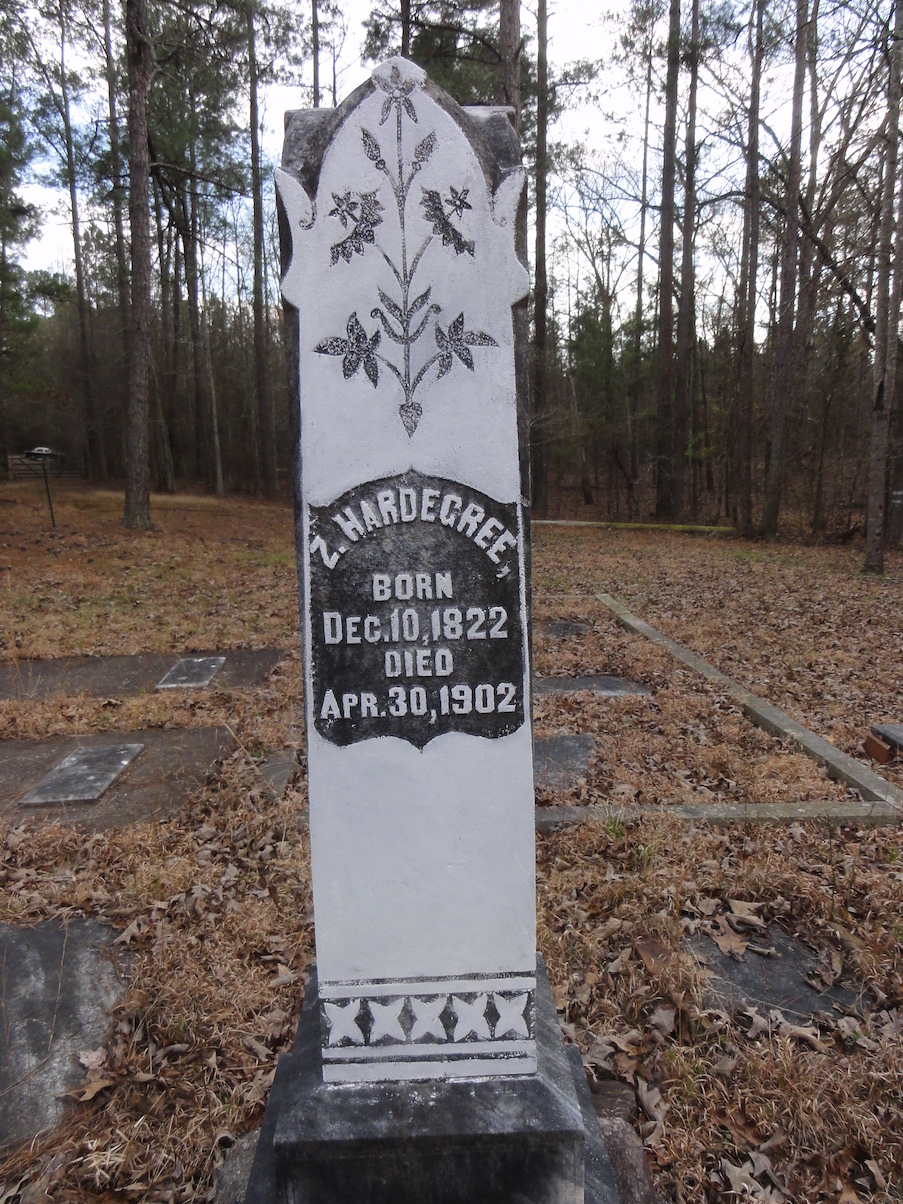 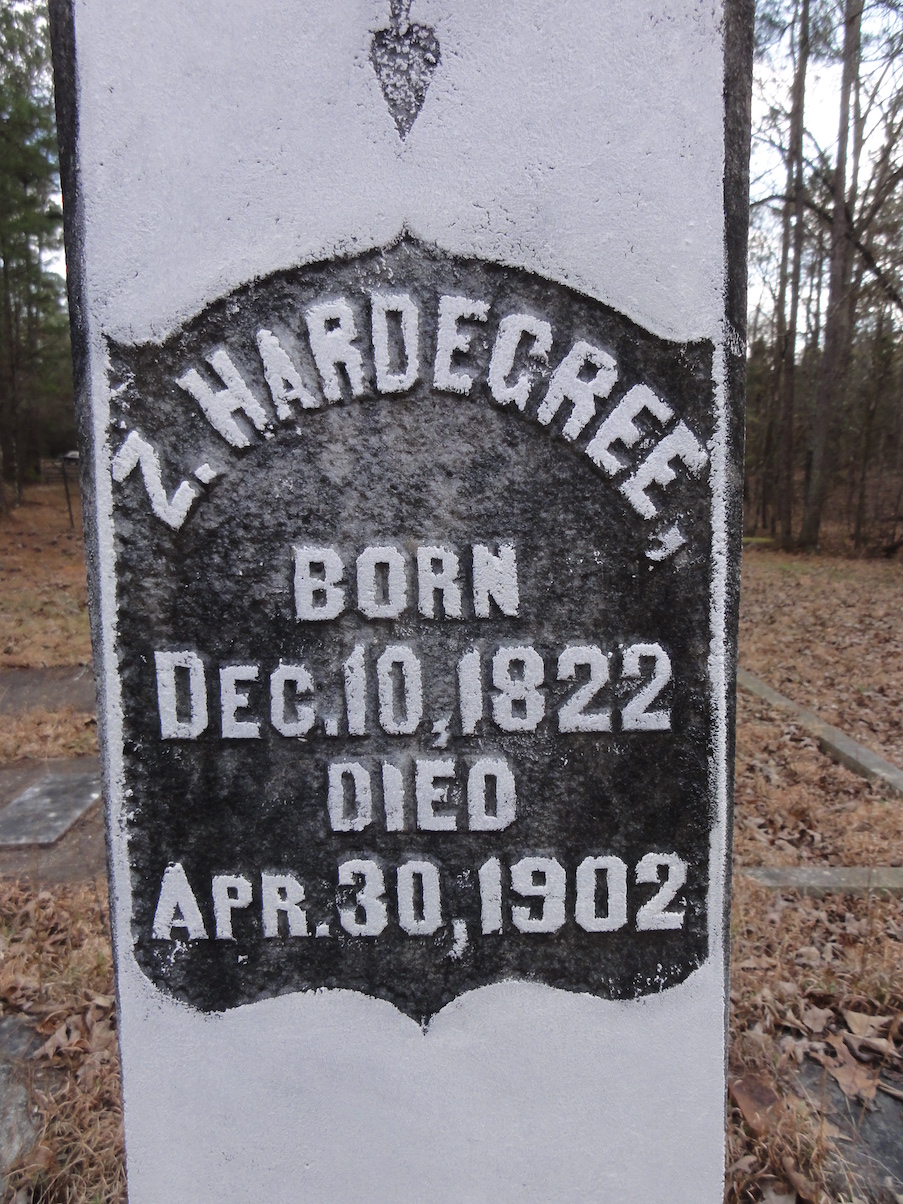 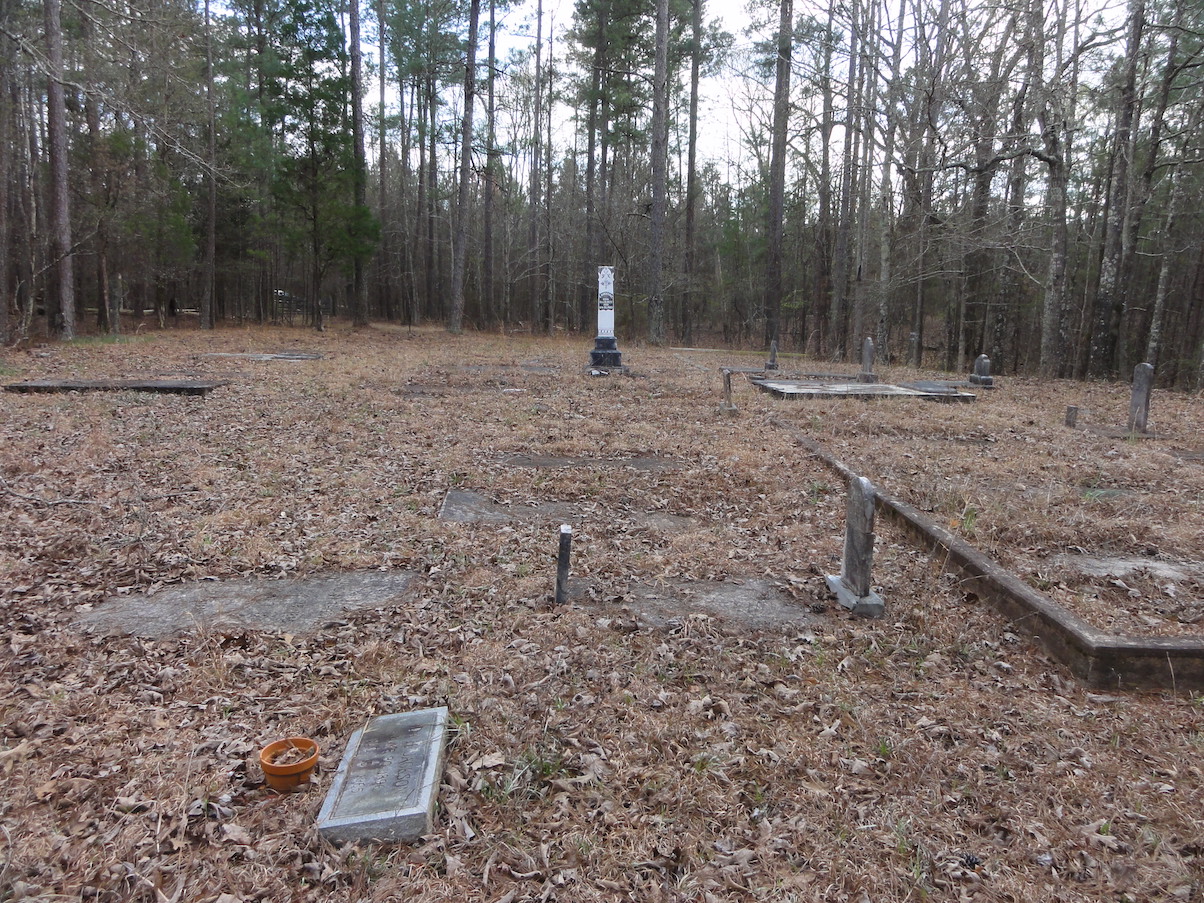 *Sometimes spelled Hardegree and others Hardigree.