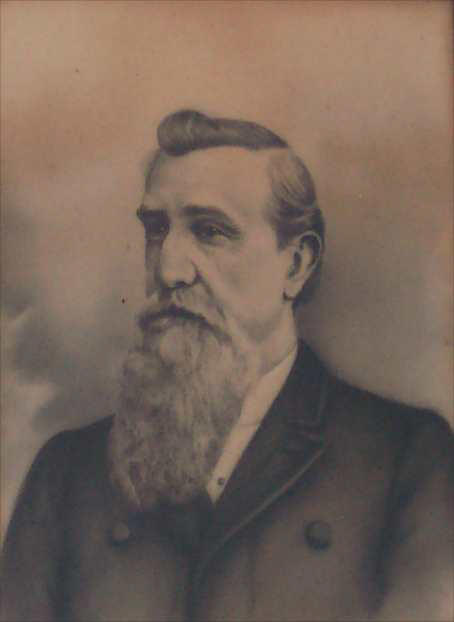 Biographical Sketch On The Life Of T.M. Harris

Thomas Marcus Harris was born near Davisboro, Washington County, Georgia on July 6, 1829. His parents were Daniel and Vashti Harris. The Harris family were members of the Methodist Episcopal Church. Vashti was a descendant of Jesse Mercer, well-known Baptist Preacher and founder of Mercer College (now University). T.M. Harris began preaching in the Protestant Methodist Church in the 1840s. He served as a circuit rider ministering to different Methodist churches. In addition he was given charge of the Mt. Zion Methodist Church in Washington County.

As early as 1851, T.M. Harris began to hear about Alexander Campbell and the Restoration Movement through his sister, Emily Jane Harris Hook, the wife of Judge James Schley Hook. Judge Hook was the son of Dr. Daniel Hook, a Christian minister already deeply involved in the church. The Hook influence, along with the reading of Campbell's writings, and serious Bible study brought him to a point that he could no longer accept Methodist teaching. In 1856 T.M. Harris was baptized for the remission of his sins by Dr. Hook in Parson's Mill Pond in Laurens County, Georgia. Along with Harris were forty Methodists that he had taught and convinced to give up denominationalism to accept the New Testament pattern. He preached his first sermon at Old Bethesda Church in Washington Co., Georgia as a Christian preacher shortly after his baptism.

Harris married Miss Mary Sarah Smith October 1, 1851. She was the daughter of Jordan R. Smith, who was believed to be the son of Rev. Jordan Smith (1777-1835) a Baptist church preacher who preached at Jordan's Meeting House. The Smiths were a wealthy family in middle Georgia. T.M. Harris was also blessed with some inherited wealth, making his work as an evangelist much easier than some of his colleagues. Because of his financial means he was able to preach free of charge, and was able to travel around with little cost to the brotherhood. He built a church building for the brethren around his home. Not long thereafter he began looking out to other areaa, and planting other churches. According to sources in the History of Washington County, GA 1784-1989 he founded many churches in Washington County, Georgia, including the Antioch church in 1856, Poplar Springs church in 1868, and Tennille church in 1887. He started the church at Davisboro, Macon and Athens. According the some sources he planted as many as twenty congregations, including thirteen in south Georgia. He wrote to the Millennial Harbinger, Nov. 1858, p. 657, that within one year he had organized five congregations. The next year he wrote to the M.H., Jan, 1859, p.56, offering $425.00 to any preacher recommended by Alexander Campbell to come and help in the work in Georgia. He said, " . . . We are rapidly growing in numbers, and in ability to pay a preacher, and we home, by another year, if we have the service of the right sort of a man, to be well able to pay for preaching. Whoever comes will have but five preaching places to attend to, they are close together, and easy to access. We have excellent good houses to preach in."

When the Civil War came T.M. Harris enlisted in the C.S.A. as a private in 1862. He then was given the field position of Captain in the 49th Georgia Washington County Volunteers. In 1864, he was named a major in Washington County's militia which was called for emergency duty when necessary. The Georgia militia aided in the defense of Atlanta that year. He served this position until he contracted Typhoid Fever. He was then given an Honorable Discharge.

After the war he served the church at Davisboro for a while, establishing other congregations in the area like Poplar Spring, 1868. But in 1869 he moved to Atlanta serving the Atlanta Church of Christ as their preacher. He helped to organize churches under the proposed Louisville Plan, serving as corresponding secretary. In January, 1873 he started editing a monthly journal called Southern Evangelist from Atlanta.

In the mid 1870s he returned to live among his beloved brethren in Washington County. According to the Christian Standard, Nov. 23, 1878 it was reported that there were eight congregations in the Washington District, with a total of 359 members. They conducted cooperation meetings on a regular basis, and Harris was generally given the presiding position.

In 1879 the state cooperating meeting (Georgia Convention) took place in Atlanta. At that meeting T.M. Harris was named state evangelist. In 1880 Harris worked to help churches throughout the state organize cooperation meetings. He organized eight district meetings that years. At these meetings subjects such as weekly church services, communion observance, regular fellowship offerings, foot-washing, Sunday Schools, whether fairs and festival for raising funds was scriptural. Though consensus was sought at these meetings, some came away still holding their own opinions.

Thomas Marcus Harris was preaching his last sermon at West Point, when his body was struck with paralysis and died at Sandersville, Georgia October 20, 1893. An obituary appeared in the Atlanta Constitution Oct. 24-27, 1893. Another obituary appeared in The Christian-Evangelist, November 23, 1893, pages 740,745. He was laid to rest in the small family cemetery between Davisboro and Riddleville at his home. The 1893 Georgia State Convention gathered just days after his death in Atlanta where a memorial service was conducted.

Note: Much of the information from the above sketch on the life of T.M. Harris was gleaned from Disciple Of Christ In Georgia, by J. Edward Moseley and History of Washington County, GA 1784-1989. In addition conversations with his grandson, Judge Harris of Sandersville, and great-niece Eve Perry of Davisboro helped to find the location of the grave, the location of the picture of Harris in the church in Wrightsville, as well as other information that helped prepare this biographical sketch.

*Moseley records that the full name of T.M. Harris was Thomas "Mercer" Harris, probably deduced from that fact that his mother's maiden name was Mercer. However according to family descendants and family records his middle name was "Marcus."

Directions To The Grave Of T.M. Harris

In late March, 2003, my wife and I got away for a couple days and visited the Sandersville and Wrightsville area. The minister at the Christian Church, Disciples Of Christ in Sandersville, Bob Raiford, kindly showed us through their building allowing us to take pictures of the stained glass windows shown below. We also visited the grave of T.M. Harris, taking the photos for this page. Elder Thomas Marcus Harris is buried between the central Georgia towns of Riddleville and Davisboro.

From Riddleville: At the Hwy 242 and Hwy 231 crossroads. take Hwy. 231 north out of town. You will pass a Fire Department and ball field on your right. The next road should be Old Davisboro Rd. Take Old Davidboro Rd. north exactly three miles to a four-way stop. (The first two miles are paved, the last mile will be a dirt road.) The road that crosses is Heards Bridge Road. Turn left on Heards Bridge Road and travel nearly 100 yards. You will see a chain-linked fence to your right. At the back of the fenced in area is the Harris Cemetery. In the cemetery is T.M. Harris, his wife, Mary Sarah Smith; at least two daughters, Mamie Harris & Emma Hook Harris Adams.

From Davisboro: At The Hwy 24 and Hwy 231 crossroads, take Hwy. 231 south toward Riddleville. Go 3.8 miles and turn left on Heards Bridge Road (not paved in 2003). Go 1.2 miles on Heards Bridge and look to your left for a chain-linked fenced in area. This will be the Harris Family Cemetery. If you go to the four-way stop ahead, you've gone too far. In the cemetery is T.M. Harris, his wife, Mary Sarah Smith; at least two daughters, Mamie Harris & Emma Hook Harris Adams. 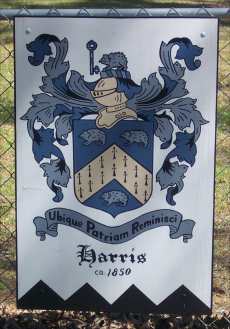 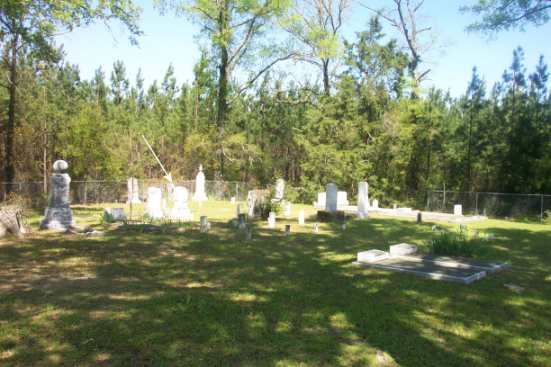 This Picture Was Taken In March, 2003. Note The Bright Hue
Around The Harris Graves. Photo Was Not Doctored In Any Way 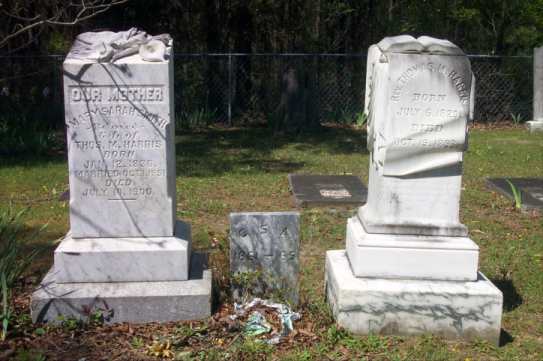 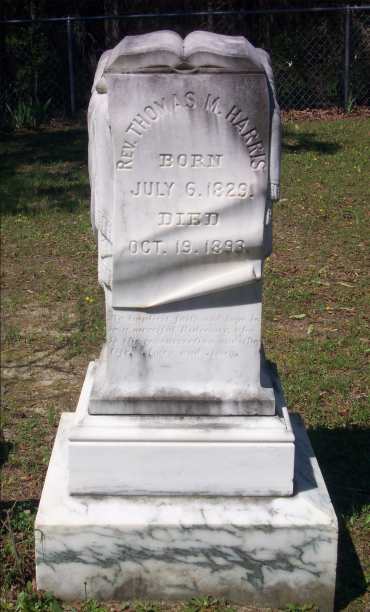 "My Implicit Faith And Hope Is
In A Merciful Redeemer: who
Is The Resurrection And The
Life" Amen And Amen 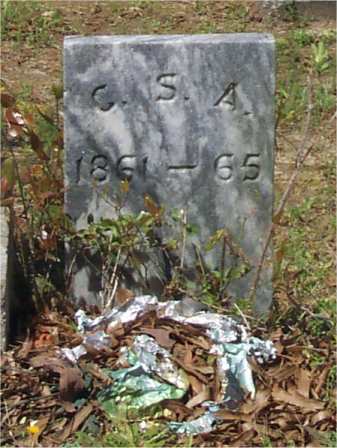 T.M. Harris Was Given The Commission Of Captain
Serving In The 49th Georgia Washington County
Volunteers C.S.A. He Received An Honorable Discharge
After Suffering A Severe Attack Of Typhoid Fever 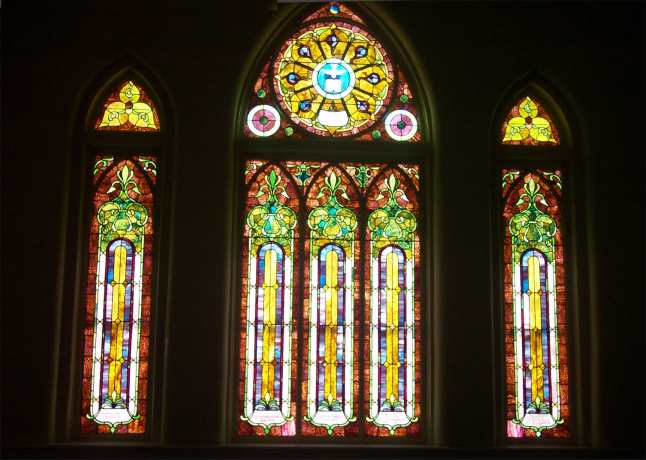 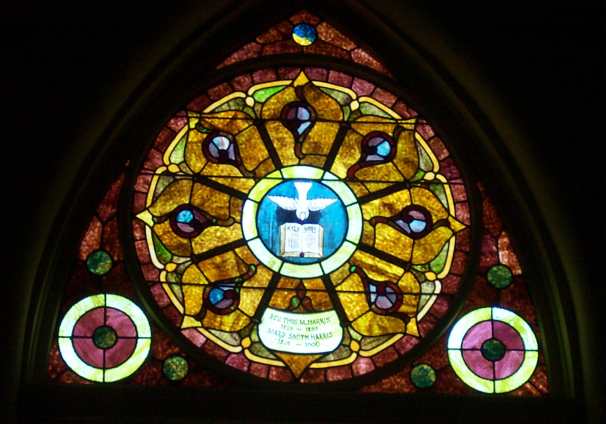 Window Presently In The First Christian Church (Disciples Of Christ)
In Sandersville, Georgia, Dedicated To The Life And Work Of Its
Earliest Members: Thomas M. & Mary Smith Harris 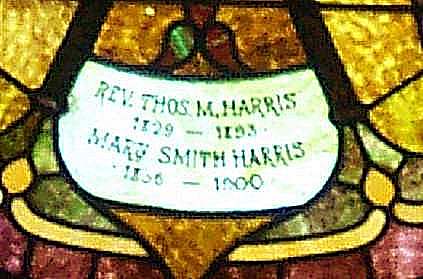