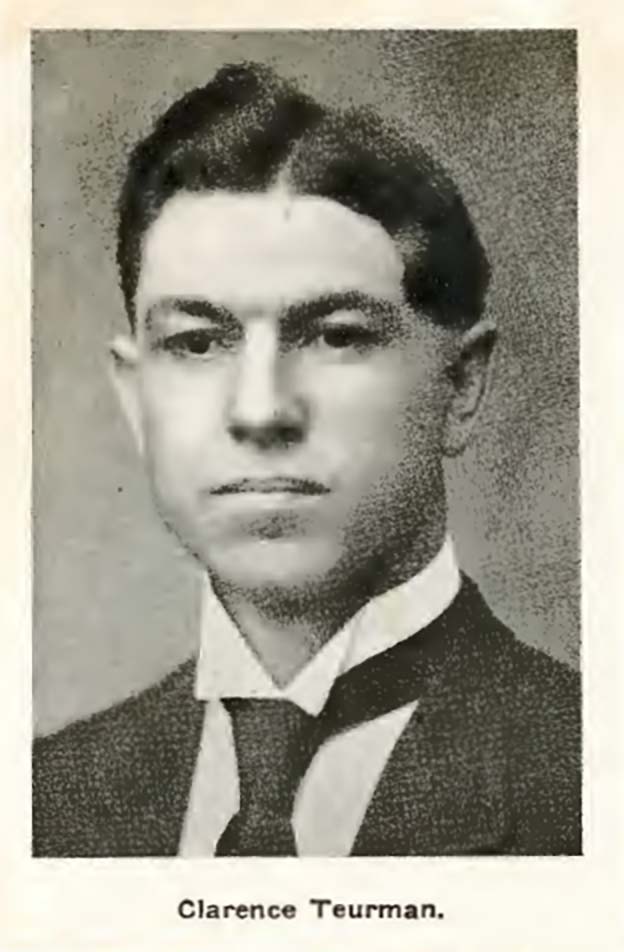 The Life of Clarence Teurman

Clarence Teurman was born August 31, 1884 near Denison, Grayson County, Texas. He was the son of Charles David Teurman (1862-1930) and Minnie Kimbrough Rose (1864-1955). Clarence was the oldest of twelve children. “Raised on the farm, where he remained till he was 22 years old, assisting in the usual farm work-attending the public schools each year. At the age of 21 he obeyed the Gospel under the preaching of O. E. Phillips.” (Gospel Preachers Of Texas And Oklahoma, C.R. Nichol, p.190.)

Clarence attended Gunter Bible College, Gunter, Texas at the age of twenty-two, and after the first of three years of study he began preaching. Early in his career he evangelized in Oklahoma, Texas, New Mexico, Arkansas, and Alabama. Immediately after his marriage to Allie Mae in 1910 they moved to Georgia where he worked with the Red Oak Christian Church located on Roosevelt Highway in Union City, just southwest of Atlanta. There they worked the remainder of his life, however, they did make occasional trips back to Texas and Oklahoma to see family and preach meetings in different locations.

While working with the Red Oak Christian Church in Union City, for a time he published a journal called, The Apostolic Way. He traveled to strengthen the churches in Georgia any way he could. The times were hard and the church was unable to support him as he needed. He did some printing to supplement the family income.

On June 30, 1923, Clarence was working printing the July 1st edition of The Apostolic Way. "The engine was give trouble, and he was trying to adjust it, when it back-fired, igniting some gasoline in the drippan, which caught his overalls." (The Apostlic Way, July 16, 1923, page 3) He suffered a severe burn of both his legs and his right arm. Initially it was thought by the doctors to be non-life-threatening. Yet, three days later he died, July 3, 1923. He was 38 years, 10 months, and 4 days old when he passed. Burial followed on July 5 in the Christian Church Cemetery there at Red Oak.

Allie Mae, still young, remarried a Mr. Otis T. Jones (1880-1978). She had two daughters with him. She was living in Cherokee, Alfalfa, Oklahoma when she passed from this life on November 4, 1971, at the age of seventy-nine.

Note: The July 16, 1923 issue of The Apostolic Way is shown below where you can read more about the sad passing of Clarence Teurman and the condolences that were sent in from all over the country. 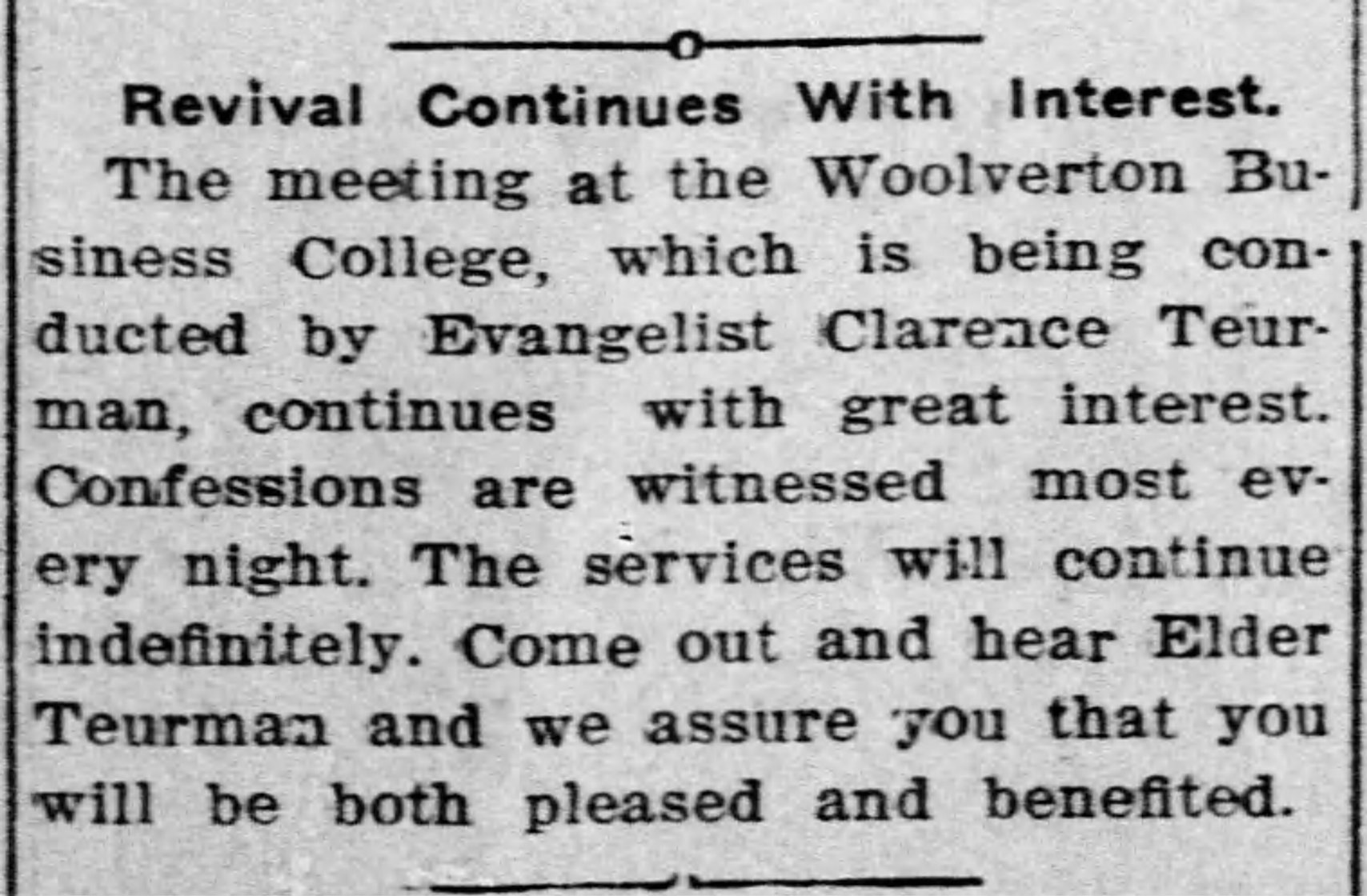 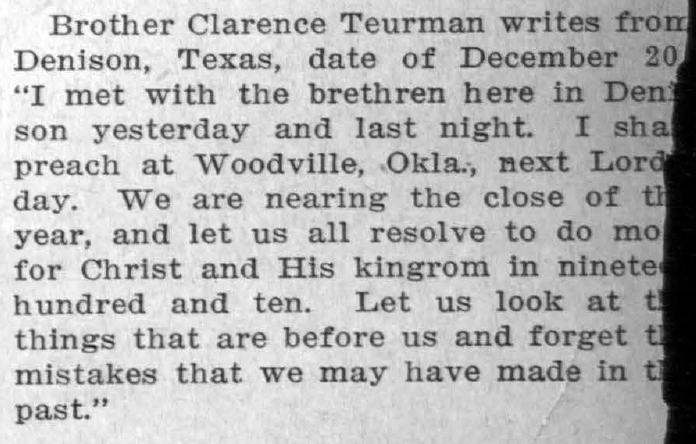 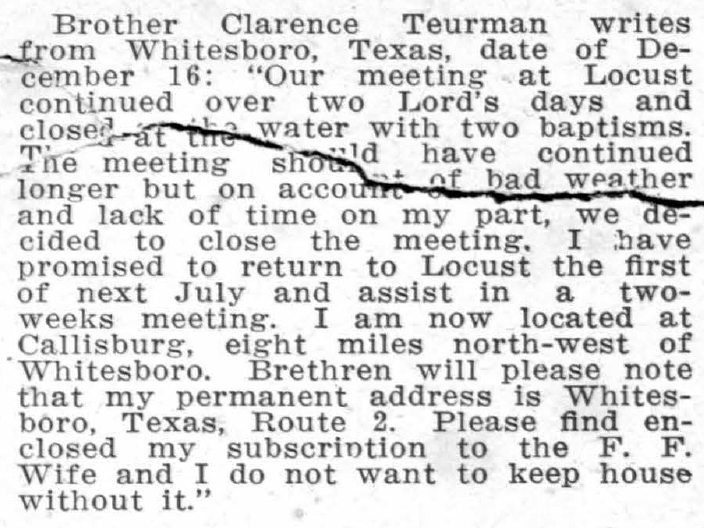 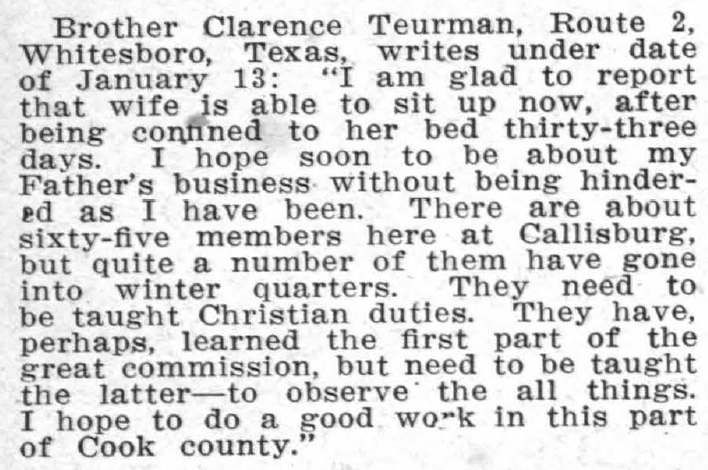 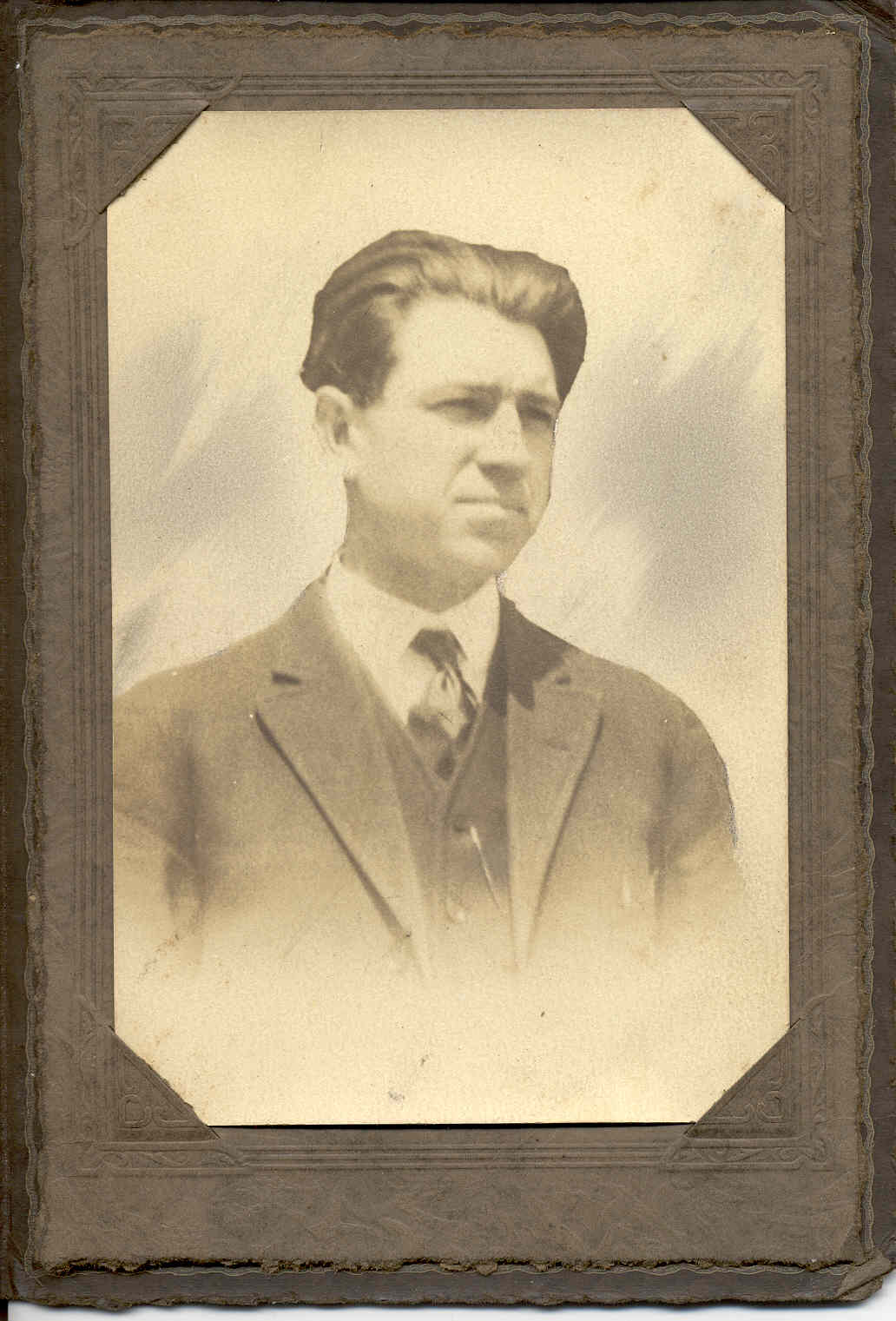 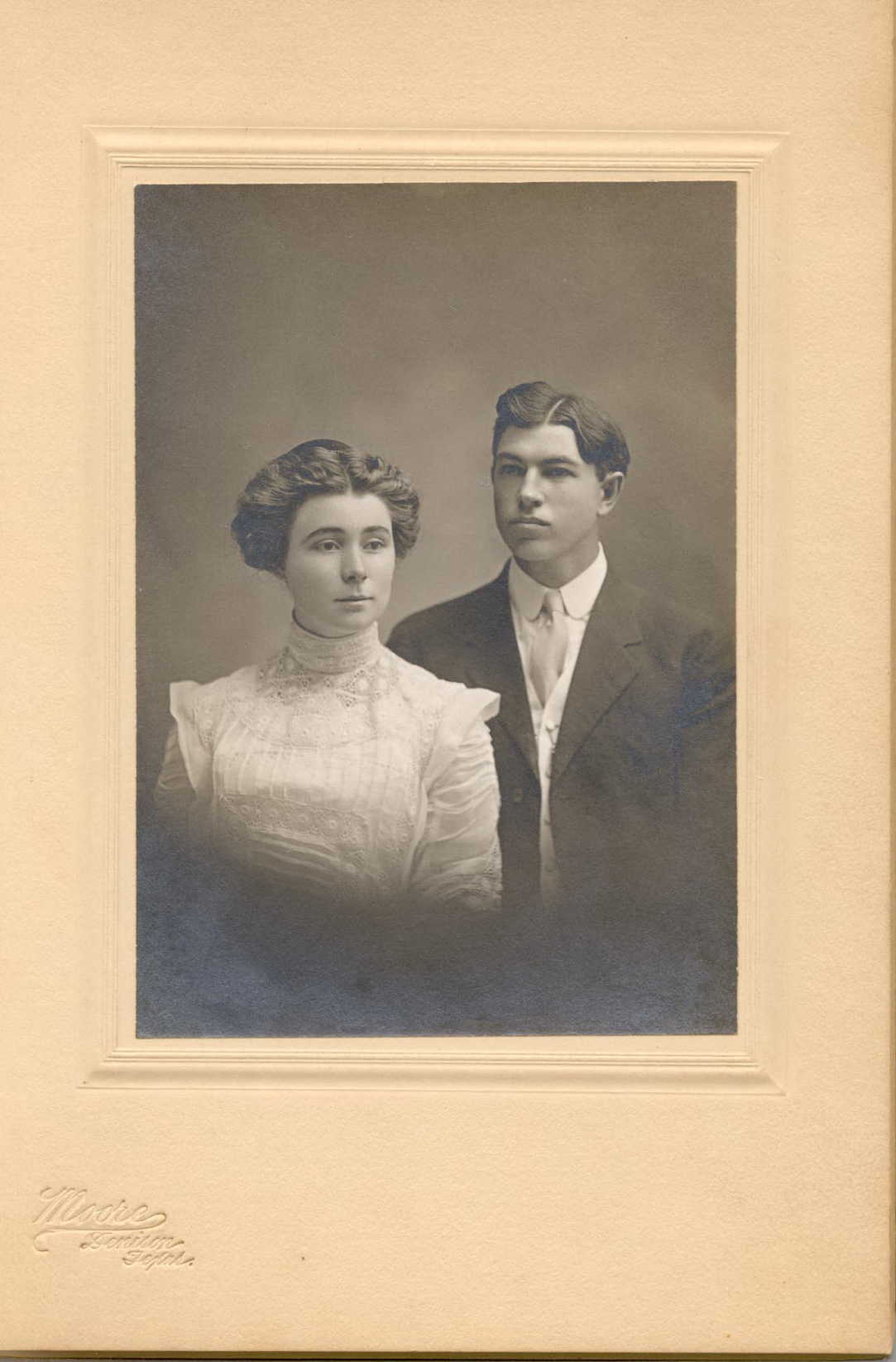 The Memorial Issue Of The Apostolic Way
July 16, 1923
Click on page below to zoom in 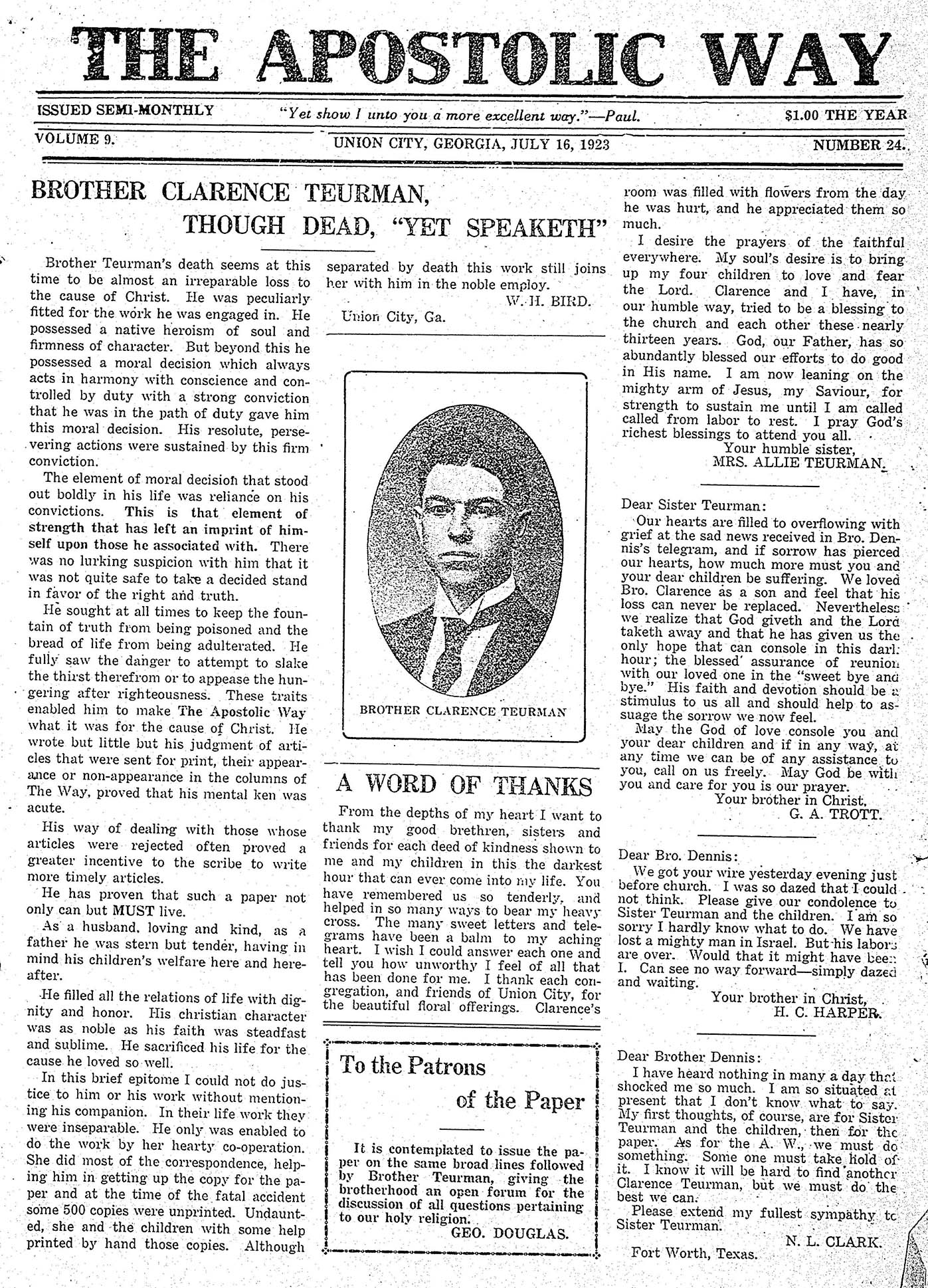 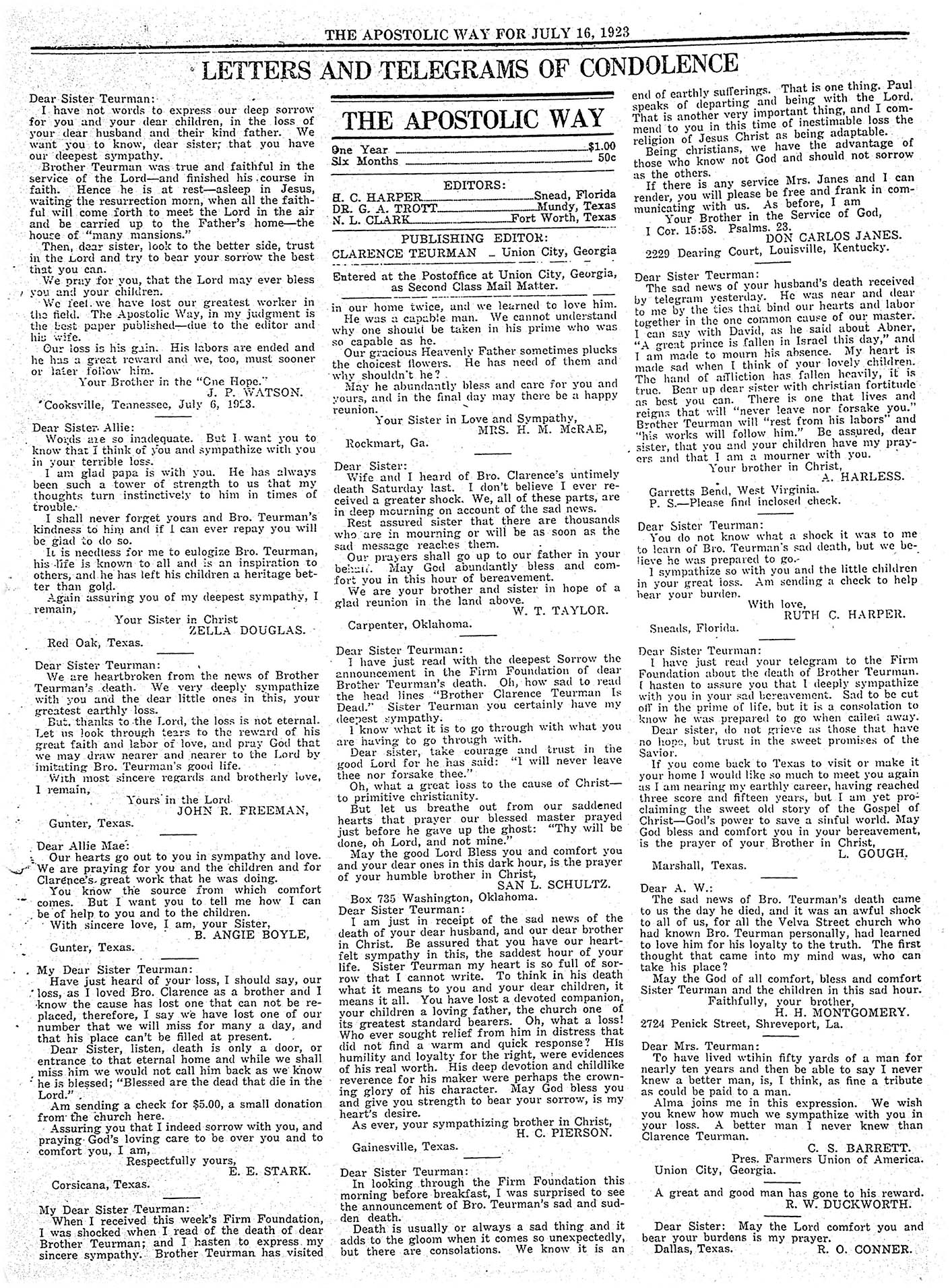 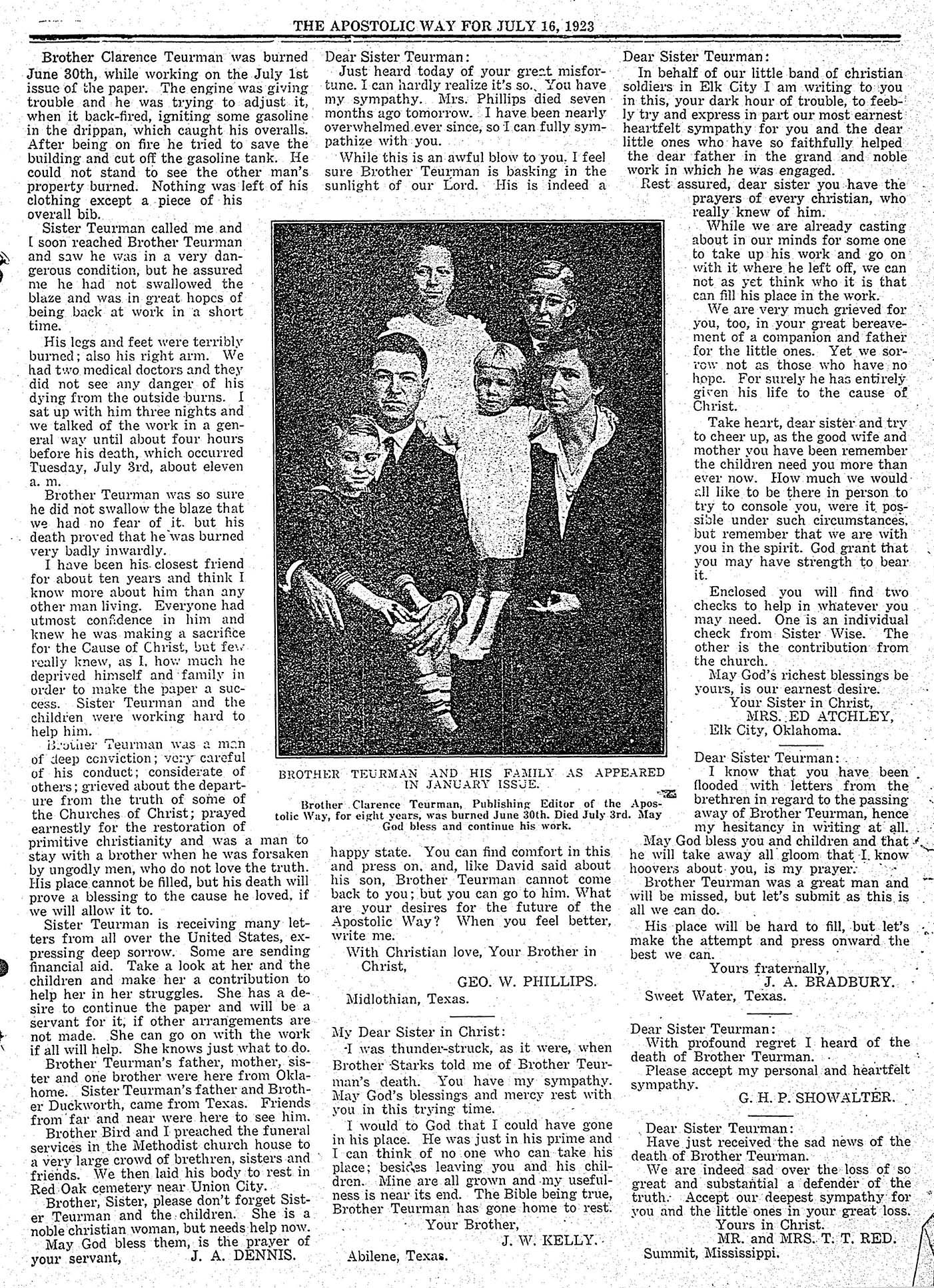 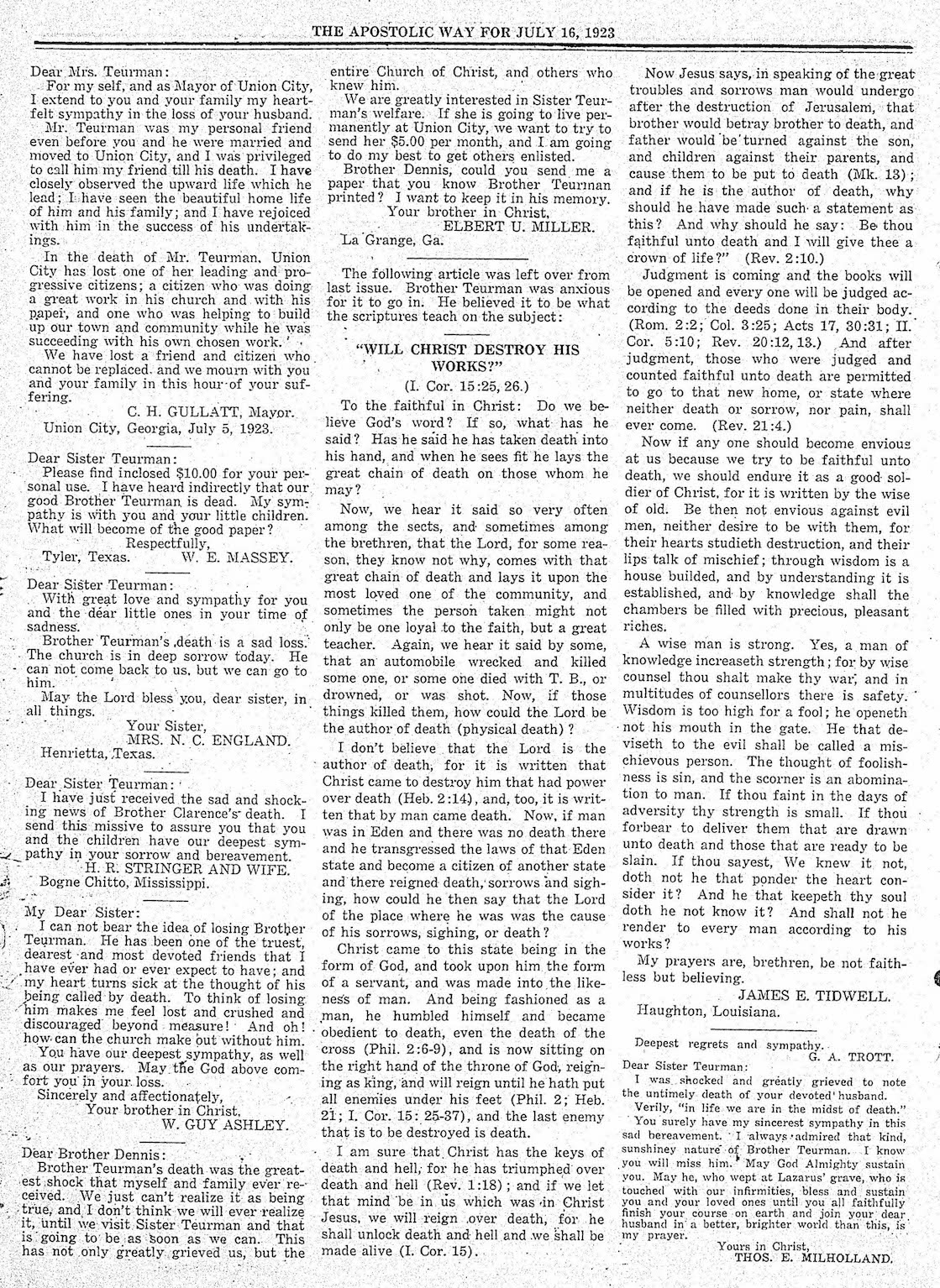 Clarence Teurman is buried in the Red Oak Cemetery (Formerly, First Christian Church Cemetery) located in a very old section of Southwest Atlanta, Georgia. Take Hwy. 29 (Roosevelt Hwy.) southwest of the Hartsfield/Jackson International Airport. The cemetery is located between Washington Rd. and Miller Rd. The best access is to try and park just west of the cemetery in an open field (2015), and enter from the rear of the cemetery. In fact, the opening at the rear is where you will want to enter. The Teurman plot is located along the ridgeline about midway. 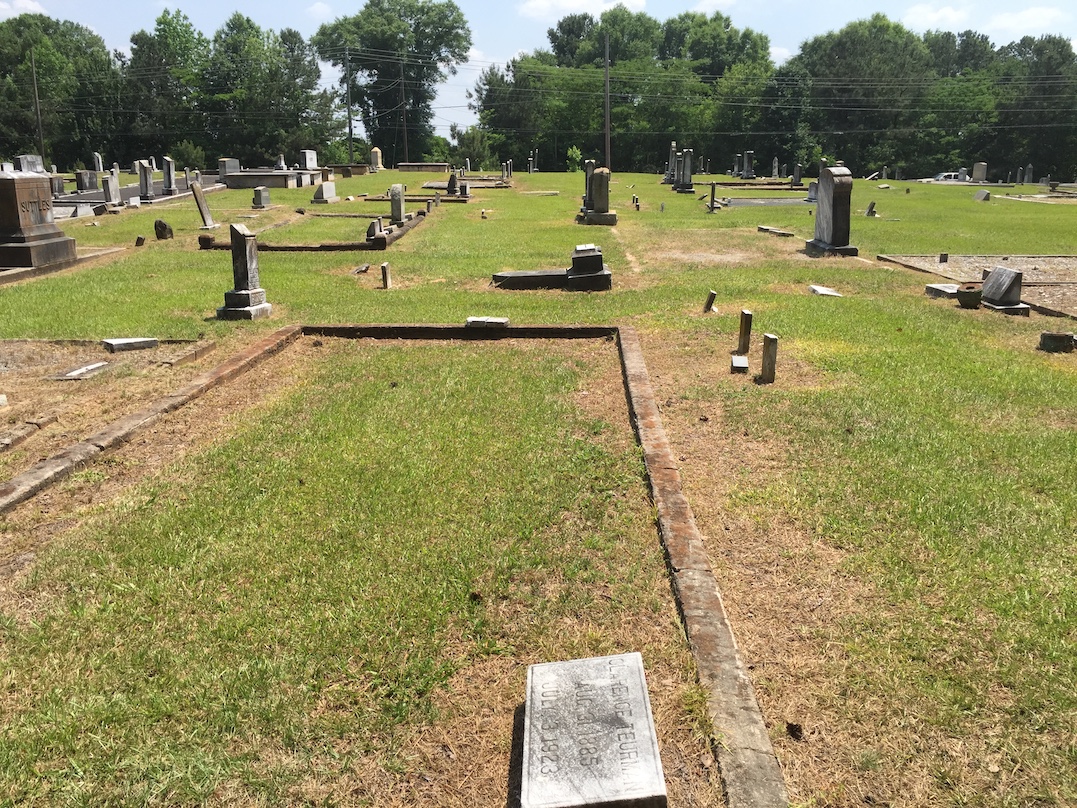 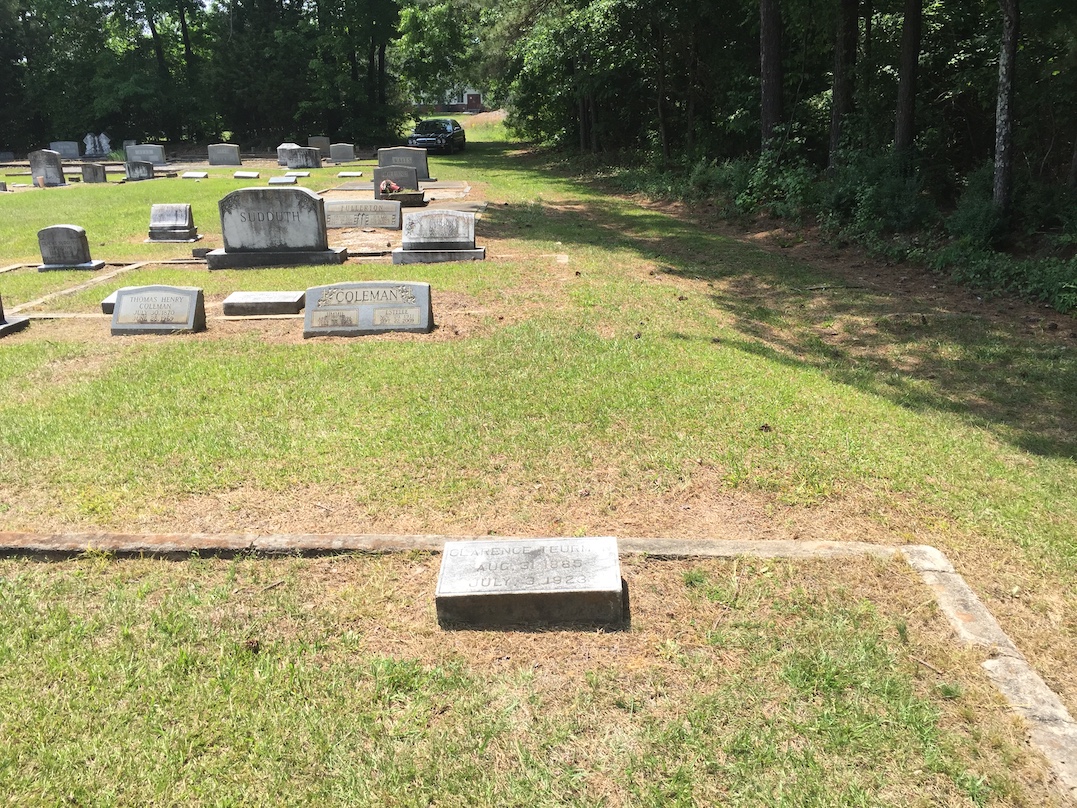 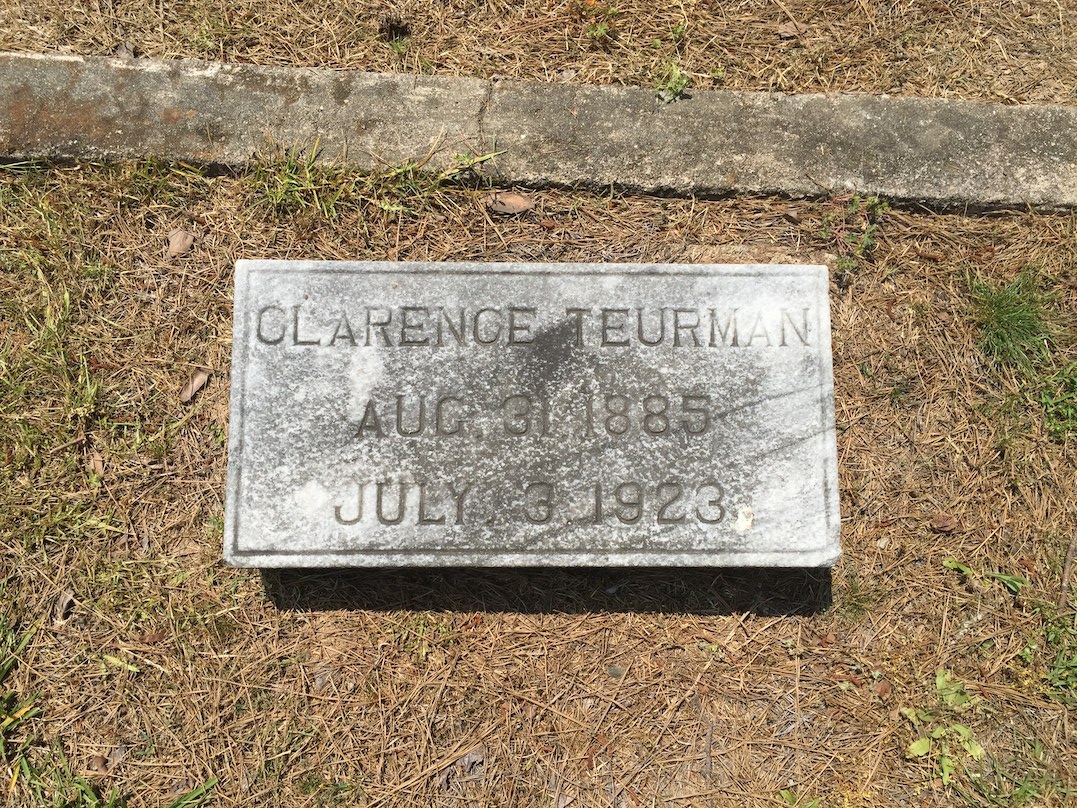 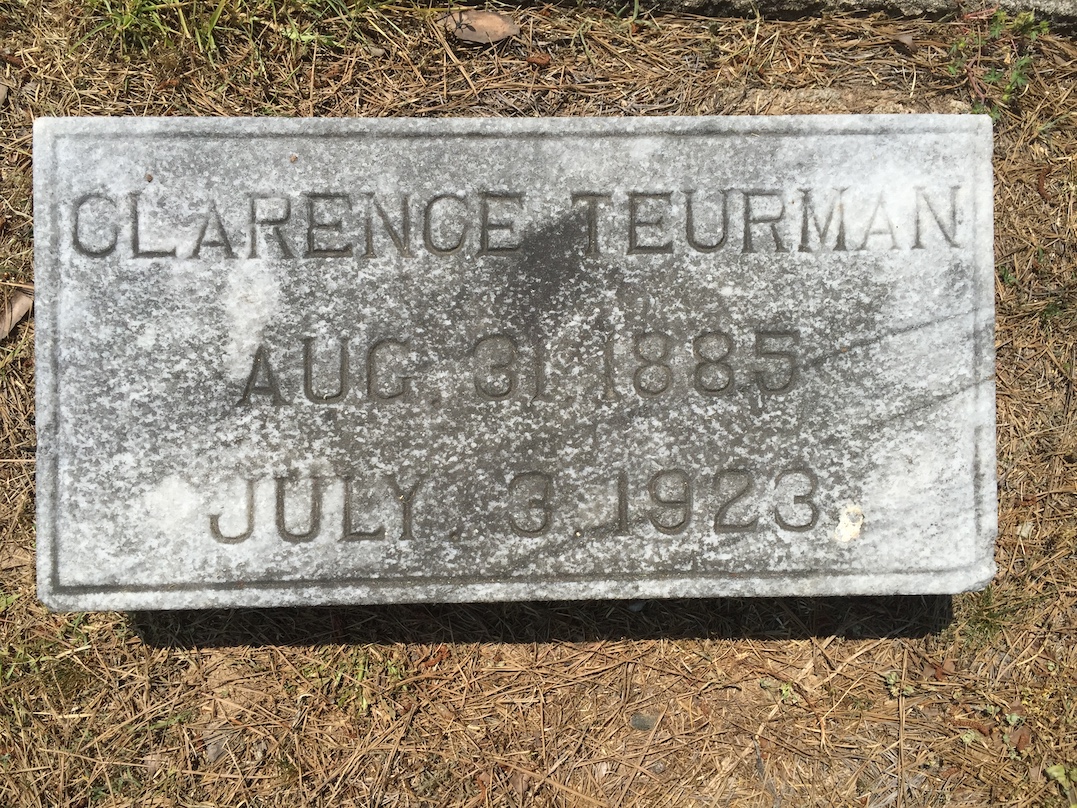