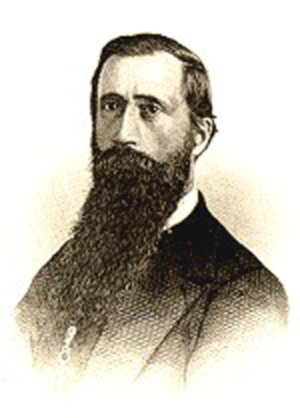 Otis Asa Burgess was born in Thompson, Windham county, Connecticut, August 20, 1829. His ancestors, both paternal and maternal, were of the Pilgrim stock. When about eight years of age his parents moved to Norwich, Chenango county, New York. He attended "Munich Academy," near his home, completed the course (except the classics) in the spring of 1847, and in the fall of the same year "went west'' to Woodford county, Illinois, and taught school till 1851, in that and in Marshall county. It was during this time that he first heard of the Disciples, and at Washburn that he first heard a full, clear statement of their doctrines. This was a forcible presentation of the gospel and its conditions, by Elder Henry D. Palmer, based on Acts 2: 38. His own words concerning it were, "It was new, wonderful. It opened a new world." He was immersed July 1, 1850; went to Bethany College in the fall of 1851; graduated July 4, 1854, and was married October 17 of the same year to Miss N. J. Ledgerwood, of Washburn, a granddaughter of Elder Palmer.

During the winter of 1854-5 he was solicitor for Walnut Grove Academy, and was instrumental in obtaining the charter for Eureka College that same winter. In the spring of 1855 he took charge of the church in Washington, Illinois, but resigned in the fall and became a professor in Eureka College, continuing one year. From May, 1861, to May, 1862, he was in his country's service, but his health failing, he returned home.

Late in the fall of 1862 he took charge of the Central Christian Church in Indianapolis. After a pastorate of nearly eight years, he accepted the presidency of Northwestern Christian (now Butler) University, in which capacity he served two years, resigning to take charge of the church on the corner of Indiana avenue and 25th street, Chicago. After a pastorate of three years he returned to the presidency of the university, where he remained eight years.

In the spring of 1881 he decided to go back to the same little church in Chicago. This was his last work. He passed away March 14, 1882, and was laid to rest in the quiet little cemetery at Forest, Illinois.

He was a man of great force of character, full of energy and persistence, of great physical power and mental vigor, and was always at work.

He was strong in controversy, and held a number of important and successful discussions in defense of Christ and his teachings. Was firm even to sternness in refuting his opponent, and seemed cold as an iceberg, but it was only seeming. His heart was as warm and tender as a little child's, and large enough to take in all the world. And so it came to pass that both his friends and his enemies were strongly so. While he was eminently successful in debate, he was just as successful as an evangelist in winning souls to Christ by his own strong personal convictions, his tenderly persuasive power, and his knowledge and use of the Word of God.

Moreover, he was successful in the management of his finances. Was deeply interested in politics, benevolence, education, Christianity at home and abroad, and freely used his means for whatever would uplift and ennoble humanity.

O. A. Burgess was a good man. In his death the church lost a pillar, and the whole world a friend.

The journey of life was begun by Nannie J. Ledgerwood on a farm in Marshall county, Illinois, near the town of Washburn. Her parents were James and Polly (Palmer) Ledgerwood. Her national descent is English-French, with a trace of Scotch and Dutch. She obeyed the Gospel under the preaching of Elder John Lindsey in August, 1852, and immediately after went to Walnut Grove and became a member of the church there, and a student of the Academy, remaining one session, till July, 1853. Was married Oct. 17, 1854, to A. Burgess, and during the more than twenty- seven years of their united lives she was his ever sought and safe counselor and devoted help-meet in all his efforts to uplift humanity.

They were living in Indianapolis when the Christian Woman's Board of Missions was organized, in 1874, with headquarters in that city. She was chosen its treasurer at that time, and has been prominently connected with that work ever since. In October, 1880, she was elected president of the Board, but removing to Chicago the following spring, she resigned that office.

After the death of her husband, in 1882, she lived with her parents in Forest, Illinois, several years. In August, 1884, she was called by the Woman's Board of Illinois to be their State president, and was continued in that position till her removal to Indianapolis, in December, 1888.

She was chairman of a deputation sent by the Board in January, 1887, to visit its mission on the island of Jamaica, to inquire into its condition and needs, and to report on all phases of the work there. The trip occupied about three months, teo weeks having been spent on that luxuriant " Land of Springs." The report was published in the July number of the Missionary Tidings of that year.

Shortly after her return to Indianapolis, in 1888, she was elected vice-president of the C. W. B. M., and in October, 1890, was promoted to the presidency, which position she still occupies.

When the Christian Woman's Board of Missions was invited to participate in the Woman's Auxiliary Congress held in connection with the Columbian Exposition at Chicago, May 15-22, 1898, she was unanimously chosen as its representative, and by request of the Congress Committee gave a concise history of the organization, methods and work accomplished by the association.

She is the founder of Burgess Memorial Hall. Her noble husband, following his Master, went about doing good while he lived. When called to his rest, she nobly sought to build a monument to his memory better than bronze, more enduring than marble. As college professor and president, also as minister of the Gospel, his work was very largely among young people, leading them in wisdom's way and inspiring them with noblest purposes. Therefore it seemed fitting that the memorial should be in the interest of education— a continuance of his life work. And so, after several years of careful consideration as to where it would best be built, counseling from time to time with a number of her long-time, tried friends, Mrs. Burgess decided to make her offering to the Board of Trustees of Eureka College. This was accepted, the Board agreeing to furnish an equal amount for the building.

Thus we have Burgess Memorial Hall, where O. A. Burgess, being dead, yet speaks, by the wise action of his devoted Christian wife. May the young people gathering year by year within its walls be led to emulate the noble life and generous deeds of Mrs. Burgess. 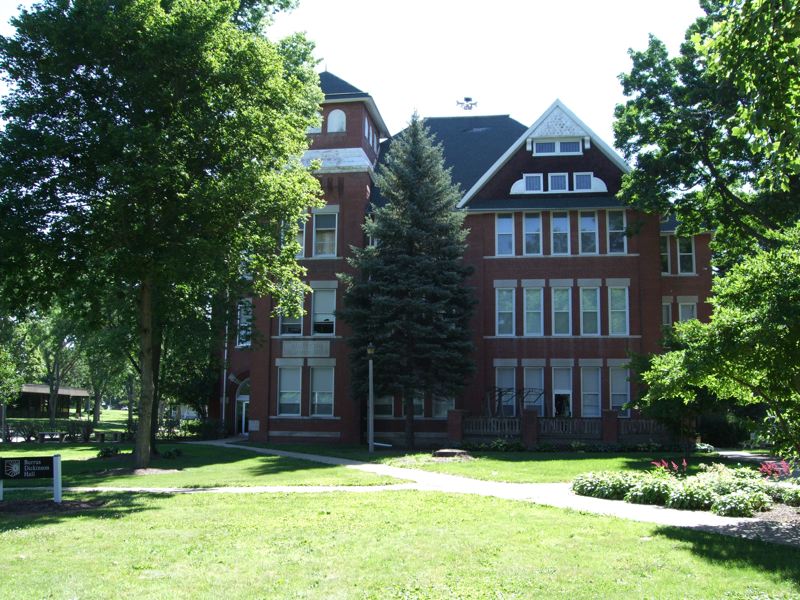 A Charitable Challenge To Match A $10,000 Contribution Given By Mrs. O.A. Burgess In 1890
Brought About The Building Of The Burgess Memorial Hall - Eureka College Was Then Just 35 Years Old 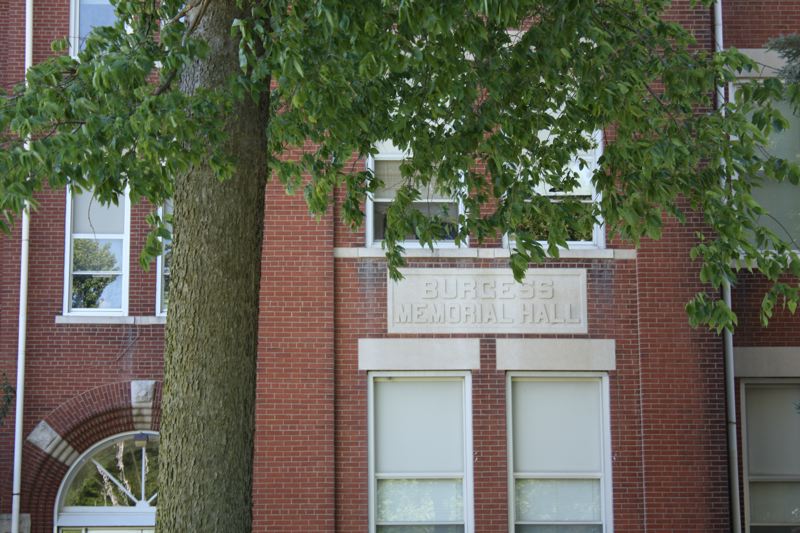 Burgess Memorial Hall Was So Named For Two Reasons: 1. Mrs. O.A. Burgess Gave The Largest Contribution;
2. The Money Was Given In The Memory Of Her Late Husband, Former Professor & Eureka College President O.A. Burgess. 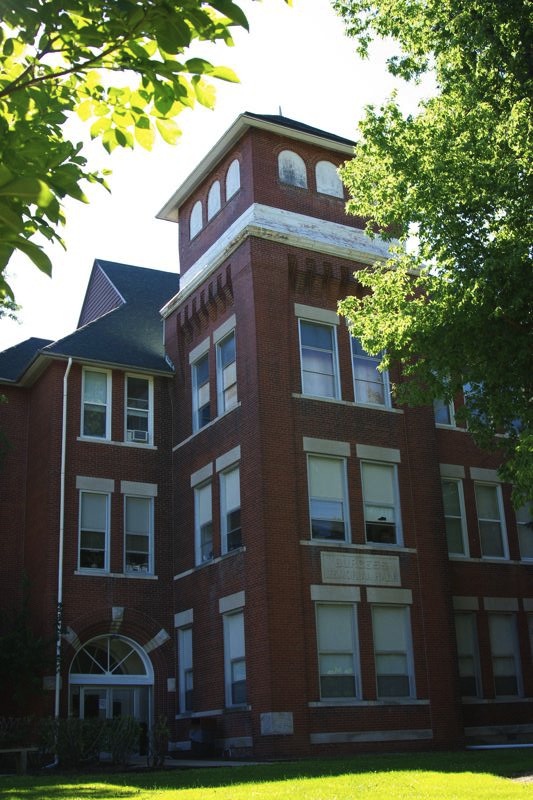 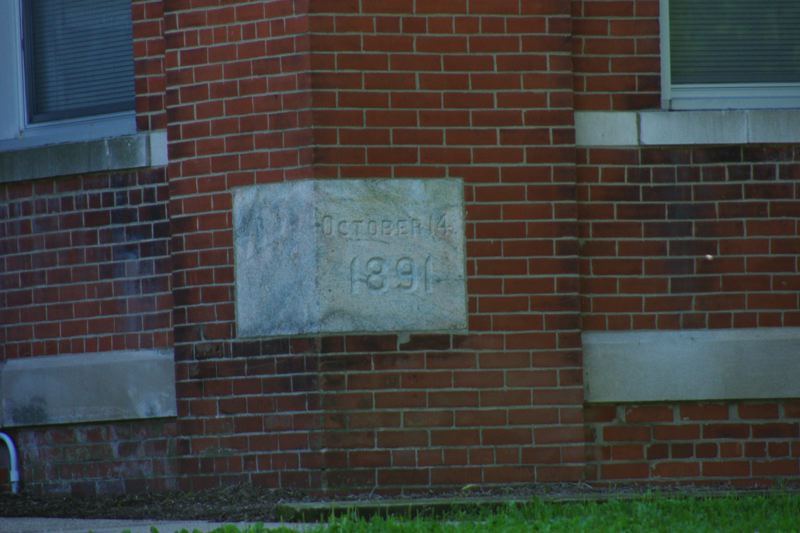 "The Cornerstone Was Laid With Imposing Ceremonies October 14, 1891" - History Of Eureka College, p.97 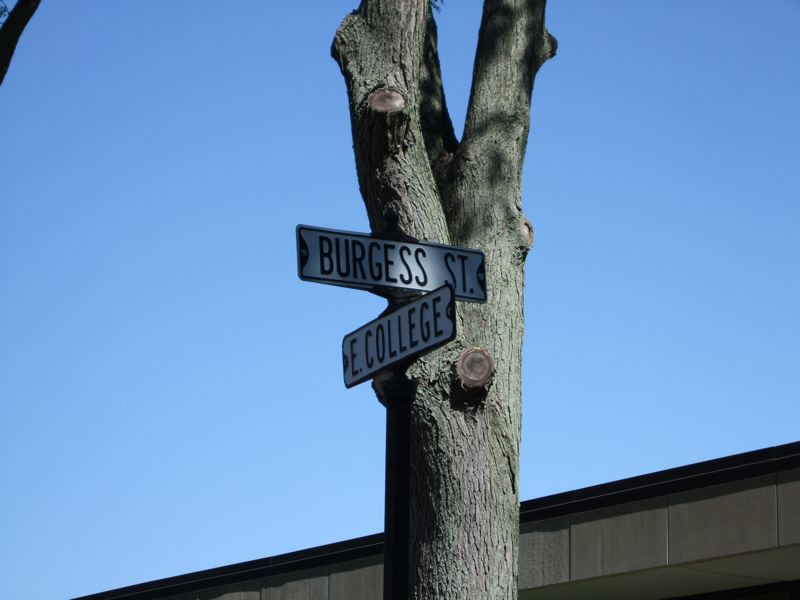 Directions to the Graves Of O.A. & Nancy Burgess

Otis A. and Nancy J. Burgess are buried in the cemetery in their hometown of Forrest Township, Illinois. Travelling NE of Bloomington on I-55 go to Exit 187, Hwy. 24 at Chenoa, and head east 16 miles to Forrest. In Forrest, turn right (south) on S. Center Street. (Hwy. 47) The Forrest Township Cemetery will be down on your left. Take the first (North Entrance) and look for an obelisk about four rows back from the highway on the right. The grave is easily found. 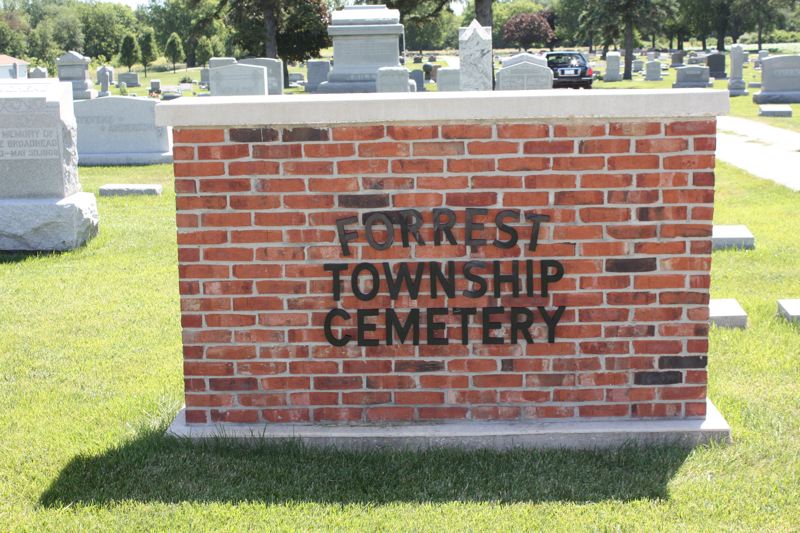 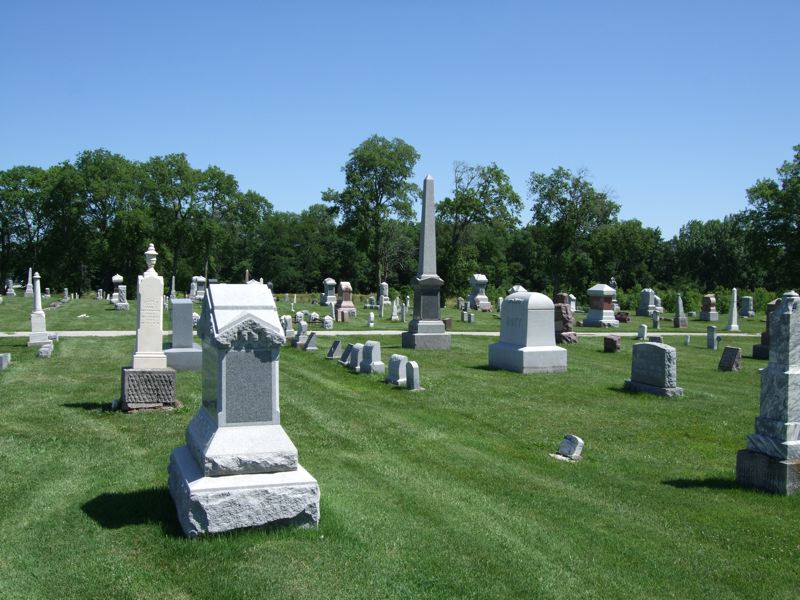 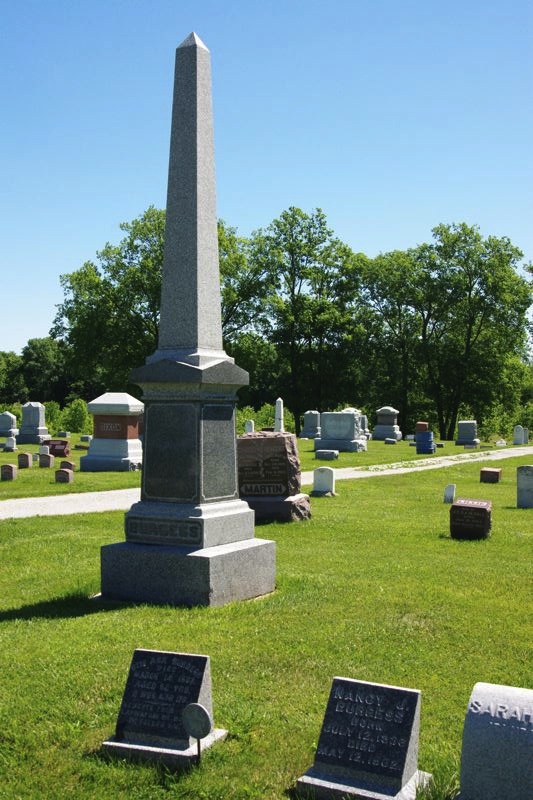 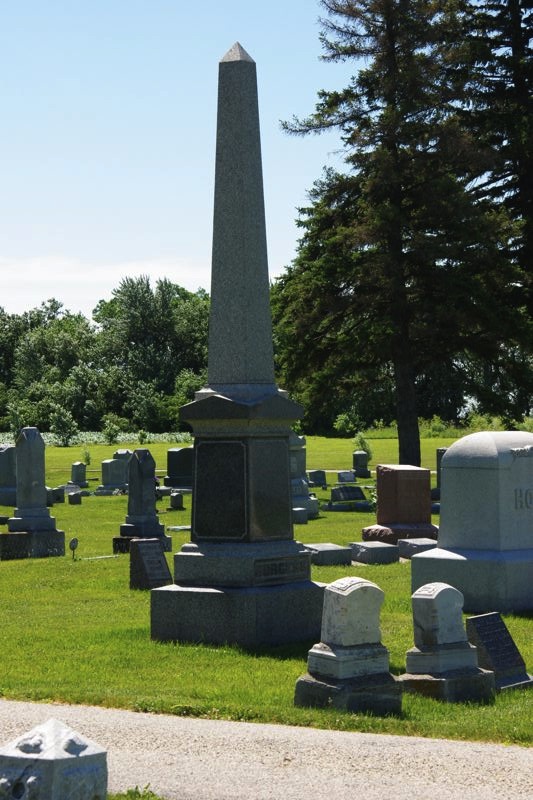 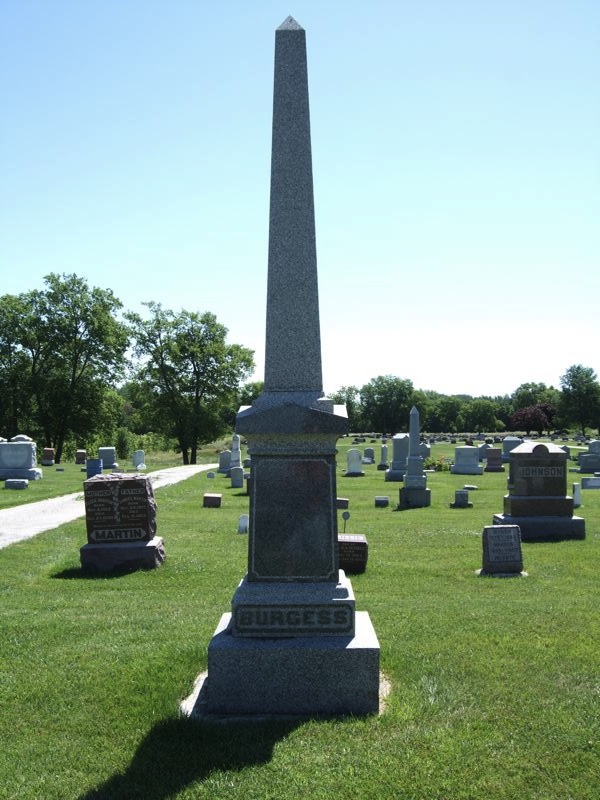 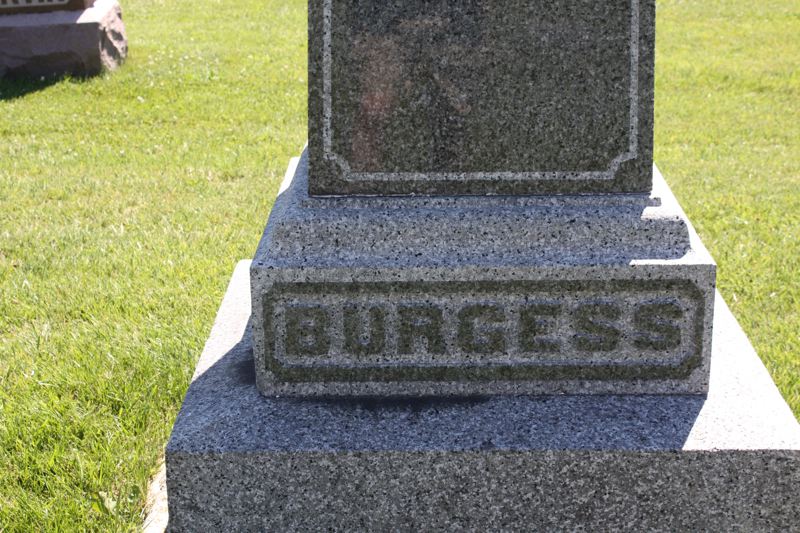 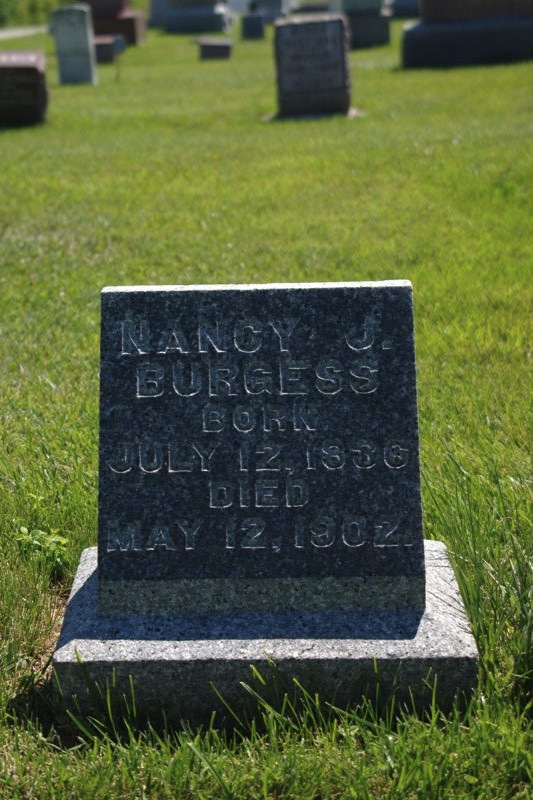 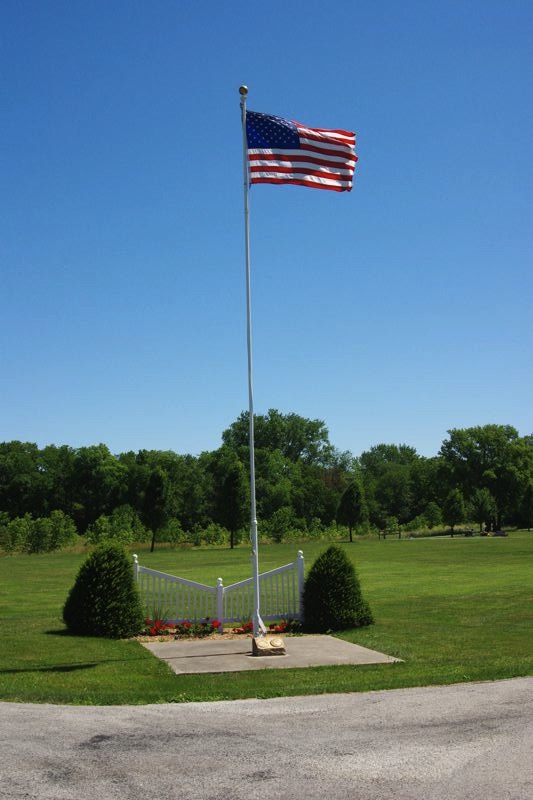