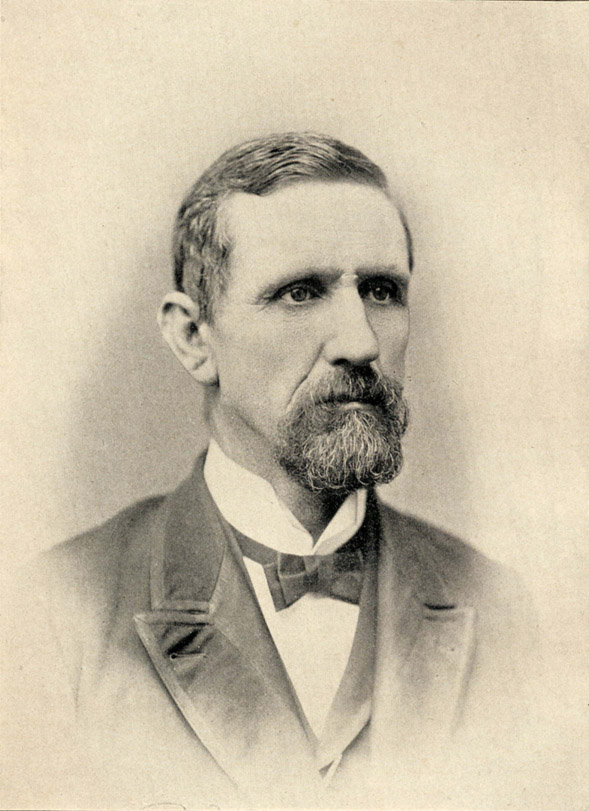 The Life Of Benjamin J. Radford

Benjamin Johnson Radford was born December 25, 1838, at Walnut Grove, Illinois, within a mile of the present village of Eureka. His parents were Virginians of English stock, with a slight admixture of Scotch on the father's side. His life, until he attained his majority, was upon the farm, working in summers and attending school during the winters. In January 1859, he began his first school teaching, at Mt. Zion, near Eureka, continuing until June. The next winter he attended Eureka College, and the next taught again, near Washington, Illinois. In the spring of 1861 he again entered college, expecting to complete his junior year. Then the war came on and he went a soldiering with the majority of his fellow students.

He was mustered out of service with his regiment in June, 1864, having served more than three years. Having secured a clerkship in Springfield, at a good salary, he was married in October of this year to Rhoda J. Magarity, of Mt. Zion, whose acquaintance he had made while teaching there, and to whom he was engaged before he enlisted. In the spring of 1865 he was induced by O.A. Burgess, his old college teacher and captain, and who was then corresponding secretary of the General Christian Missionary Society, to enter the ministry. He resigned his clerkship, and after spending a part of the summer traveling for the Society under the direction of Mr. Burgess, that fall again entered Eureka College, graduating in June, 1866. The year 1867 was spent in farming, and in the spring of 1868 he was installed as pastor of the church at Niantic, Illinois. The next spring he returned to Eureka, purchased the Woodford (now Eureka,) Journal, and while conducting that preached in the neighboring congregations on Sundays. The next year he was appointed Professor of Latin in his Alma Mater, and entered upon his work with the fall term of 1870. He continued in this work until 1881, occupying the presidency of the college part of the time. In July, 1881, he accepted the pastorate of the church in Des Moines, Iowa, and the next year was elected President of Drake University. Double labor of pastorate and the presidency caused a physical breakdown which compelled a resignation, and in July 1883, he returned to Eureka. After a short rest he was as good as new, and that fall found him teaching again in the college and preaching for the Eureka church, in both of which labors he had spent so many years.

In September, 1885, at the earnest solicitation of Isaac Errett, Mr. Radford accepted the pastorate of the Richmond Street Christian Church in Cincinnati, of which Mr. Errett was an elder. During the next summer he was chosen as Mr. Errett's associate in editing the Christian Standard, and still occupies the position of associate editor on that paper. In connection with Miss Jessie Brown, he edited several volumes of The Disciple, a periodical that met with great favor among the Disciples. In 1890 be became pastor of the Central Christian church of Denver, but returned to Eureka in 1892 and resumed his work in Eureka College, where this sketch leaves him.

As preacher, lecturer, editor and poet, Mr. Radford has become known throughout the brotherhood, and whatever reputation he has, has been justly earned by hard and continuous work. He was honored with the appointment of representative of the Disciples of Illinois in our World’s Fair Congress in connection with the Parliament of Religions, and gave eminent satisfaction as such representative.

Directions to the Grave Of B.J. Radford

Benjamin J. Radford was born December 25, 1838 and died May 1, 1933 at 94 years of age. Known as "Prof" Radford to his students, he performed the wedding ceremony for the parents of Rosemary Hartter, the Eureka Cemetery manager. Benjamin and his wife Rhoda are buried in the Olio Township Cemetery, also known as Eureka Cemetery in Eureka, Illinois. The city is located just east of Peoria on Hwy. 24. In the town center turn right on Hwy. 117. and go past Eureka College, and you will see the cemetery on the left. This cemetery was at one time the old Eureka Christian Church Cemetery. The building has long been gone. Enter into the main entrance of the cemetery and take the second drive to the left. Go midway in the section. Stop the car. Go into the section to the left. The Radford markers will face the street. Look for the redstone monuments low to the ground as shown in the photos below. 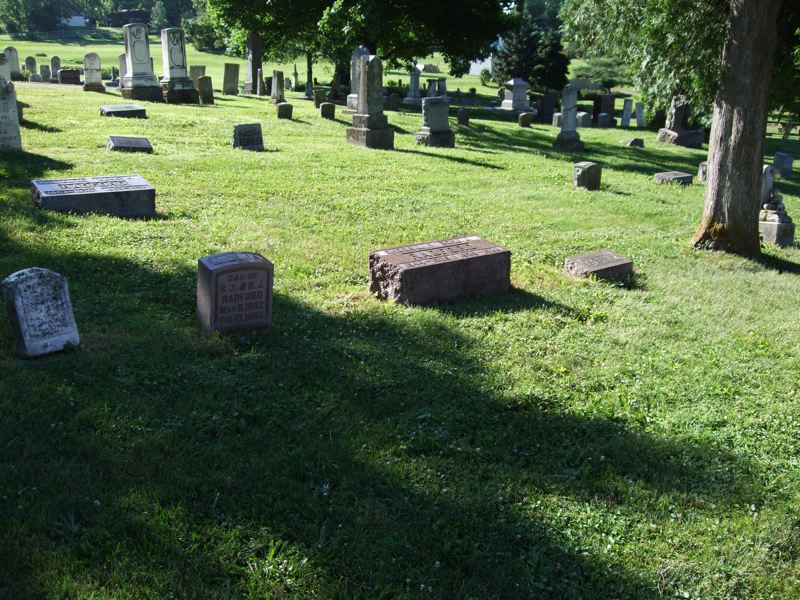 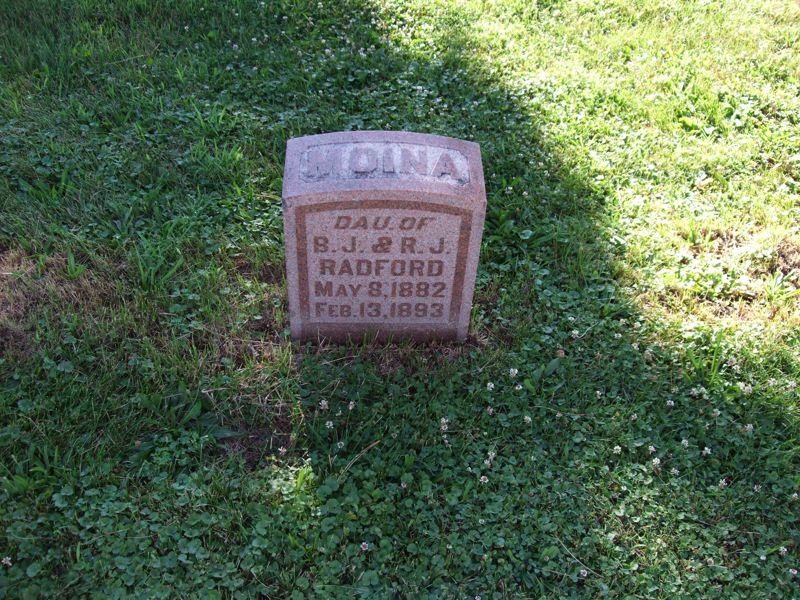 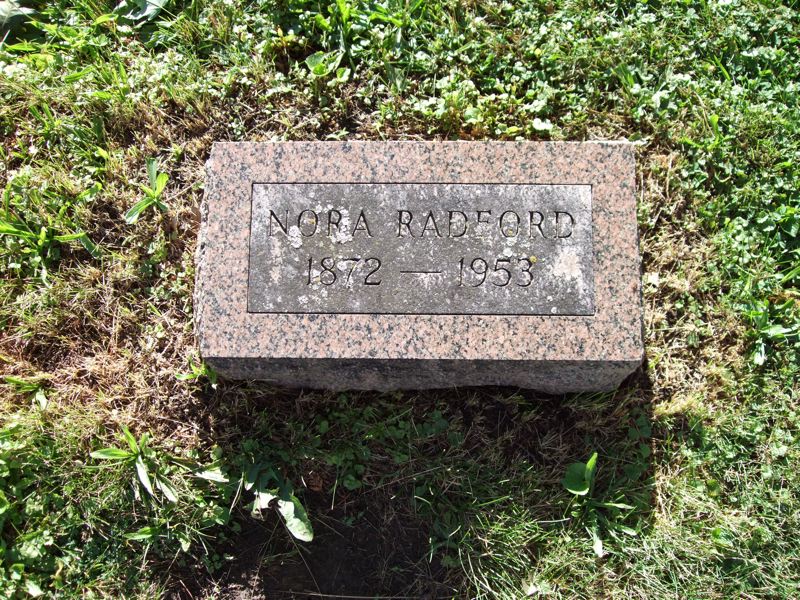 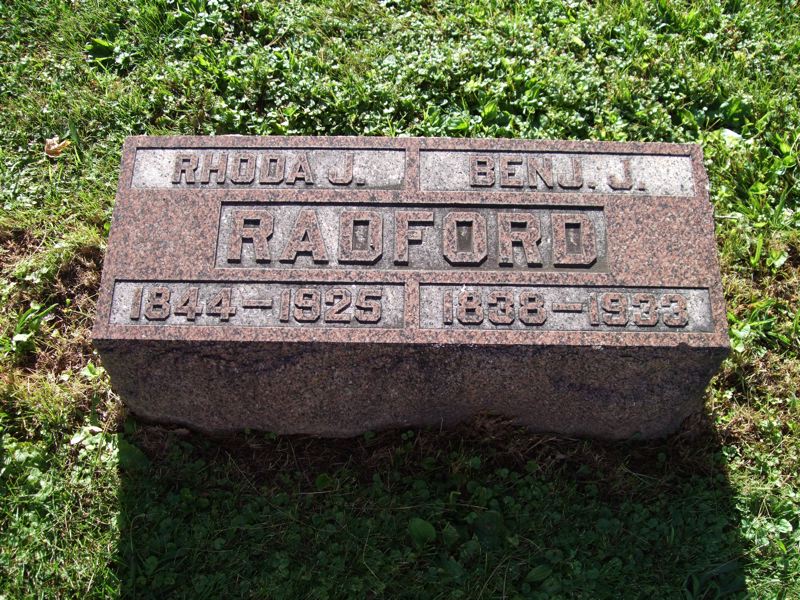 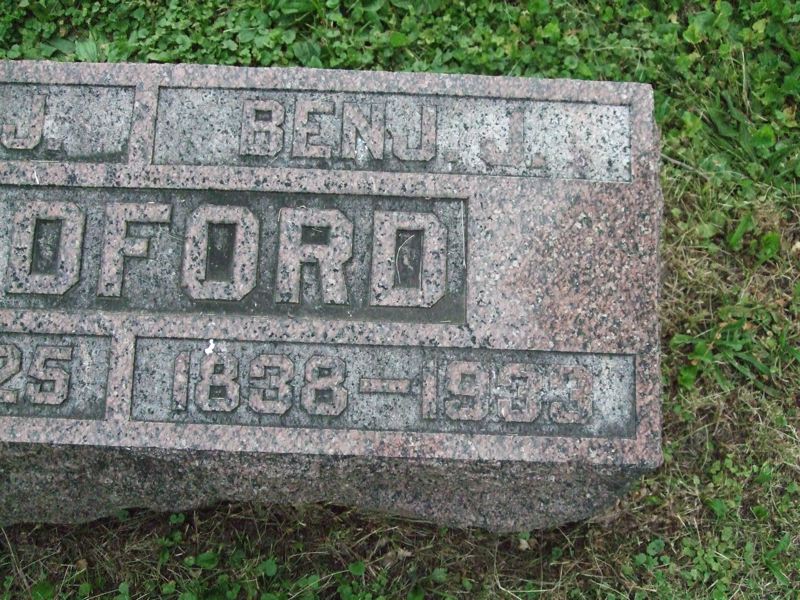