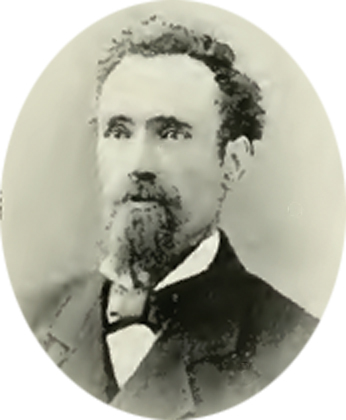 The Life Of John G. Waggoner

The subject of this sketch, so intimately connected with our religions, missionary and educational work in Illinois for more than twenty years, was born in Moultrie county, Illinois, about eight miles west of Mattoon, April 22, 1844. His father, Edward M. Waggoner, of German extraction, was born in Rutherford county. North Carolina, and with his father's family, chiefly for their anti-slavery views, came to Illinois in 1829, settling in Moultrie county, about seven miles south of Sullivan. The older Waggoners were active in the war of 1812, and made enterprising pioneers for the new West. Susan Adaline Waggoner, the mother of J. G. was the daughter of Mr. Garland Sininis, another pioneer, from Owen county, Kentucky. She died the spring after. I. G. was born, and his father died a year later.

Before his father's death, the orphan boy had been committed to his aunt, Nancy M. Wageroner. In 1848 she was married to Mr. A. II. Edwards. In their happy, intelligent, industrious home he grew to manhood, in the enjoyment of every favor of an own son. Mr. Edwards was well educated, and early inspired in all his family high and noble purposes for life. His only living son, Elder Thomas Edwards, is an able Christian minister of Gilroy, Cal.

During his childhood and youth J.G. attended the country school in winter and worked with his uncle in his tan-yard and on his little farm in summer. His early purpose to become a minister of the Gospel was ever his ruling purpose.

In the spring of '64 he formed the acquaintance of Elder J.W. Tyler, the father of the well-known Christian ministers, B.B. and J.Z. Tyler. By father Tyler's counsel and the encouragement of his uncle Edwards, he entered Eureka College in the fall of '64. Want of means made his attendance somewhat irregular, but, by making tires, sawing wood, teaching school and preaching, he was enabled to graduate in the classical course June 6, '72. Three years later Eureka College conferred upon him the degree of Master of Arts.

Bro. Waggoner has been twice married; the first time to Miss Sarah E. Cox, of Mattoon, April 4, 1867; and the second time to Miss Ann A. Fouke, of Shelbyville, Illinois, January 28, '86. He feels inexpressible gratitude to God for such faithful, noble and true companions, who have shared so patiently his burdens, and added so much to his success. True, a minister's wife often has the harder lot, but her reward awaits her at her Master's hand.

Bro. Waggoner has four living children—William II., Edward P., Harvey G., and Susan M.—all of whom have obeyed the Gospel. Be was baptized by Elder B. \V. Henry, August 18, 1859. His people generally were Predestinarian Baptists, but his uncle Edwards and wife were prominent pioneer Disciples. He began early to take some part in prayer-meetings and preached his first sermon in the spring of '65. He was formally ordained by authority of the church at Princeton, Illinois, April 10,1808, Elders George McManis and G. W. Mapes officiating. This was during his first special work, which Lasted but one year. Dining this year he held his first protracted meeting, when about fifteen became obedient to the faith.

From 1868 to 1870 he was at Lostant, Illinois, preaching and teaching school. He then re-entered Eureka College. Before his graduation the church at Harristown extended him a unanimous call to become its minister. During the following live years he served this church, which was about doubled in membership, its first young people's society was organized and several mission Sunday schools were conducted.

His health giving way, he resigned, spent two months in the Rocky Mountains, and in the fall of '77 was called to preach for the church in Shelbyville, Illinois. Daring the following live years the church, notwithstanding manv deaths and removals, about doubled its membership, and all the departments of the church were greatly strengthened. In the fall of '82 his wife's health induced him to resign and seek for her a milder climate. After ample provision for her in the home of a dear friend in Knoxville, Tenn., he took charge of the church at Greencastle, lad. After fifteen months' work here, during which the church prospered, he returned to Illinois, locating at Pittsfield. He staid here a little less than two years, and in January, 1886, he yielded to the call of the church in Eureka, where he labored during the following eight years. This last pastorate he regards as the most fruitful that he has yet had, although his work has been uniformly successful and prosperous. He regarded the field in Eureka peculiarly favorable. Its removal from the temptations of city life, the intelligence of its citizens, drawn together by Eureka's rare educational facilities, the large company of young people gathered from our best homes, a willingness to work on the part of the people, an active and wise official board, and good evangelistic help, he regards as chief elements in the church's prosperity. During the eight years there were about one hundred persons all the time on regular standing committees; the Christian Association, the Bible Workers, the Senior and Junior Christian Endeavor Societies were formed; the two Auxiliary Missionary Societies, the Mission Band and the Ladies' Aid did their best work; the Sunday-school greatly increased and about 1,035 persons were added co the church. January 1st, '94, he resigned in Eureka to take up the work in Buffalo, N.Y. Besides his regular pastoral and pulpit duties he found time to foster many public enterprises, beyond the borders of the church, to which his brethren called him. He was active in the Woodford County Christian Cooperation, serving as its chairman, and one of the prime movers in organizing- the Ninth Congressional District for missionary work, and in merging into it the comity work.

He was president of the State missionary convention in '85, and has served as one of its board about seven years. In the hoard he was regular at its meetings, and has served about four years on the Permanent Fund Committee, and seven years on its Students' Aid Committee, since the organization of the Illinois Christian Encampment Association, he has been on its board, several times president, and always active in the preparation of its extensive program. He was one of the originators of the Bible Students' Aid Fund, one of its most liberal contributors, and he solicited in cash and pledges for its use more than $6,000.

He served on the Board of Trustees of Eureka College about six years. He has ever been one of its warmest friends, and is now president of its Alumni Association. To build and equip the Burgess Memorial Hall, he spent several weeks in the field, securing in cash and pledges about 89,000. He was a true brother to every professor and a warm friend of all the students.

He has served several years on the State Sundayschool Board, and acted as president at some of its conventions. He has been the leading spirit in inaugurating and carrying forward Christian Normal Sunday-school Studies for teachers and Bible students among the Disciples.

He is a frequent contributor to our religious journals and to local papers. He has written several tracts; "What Must I do to be Save I?" and "A Plea for the Soul” having the largest circulation.

As a preacher Bro. Waggoner is clear, careful, earnest and practical. Every sermon seems to inspire to better living or a clearer conception of the truth. llis sermons are fresh without being sensational. He has held several very successful meetings, but has not worked much as an evangelist, his efforts being rather to keep the church for which he labors so full of life and warmth that the Lord may add to it daily the saved. In this he succeeds.

As a pastor he is regarded a model. His unusual freedom from favoritism, his large sympathy for the poor and afflicted, his knowledge of the temptations of the rich, his high appreciation of talent and his patience with ignorance, make him at once the trusted companion of all classes and ages. He spends much time among his people, not as a mere visitor, but as a true friend and brother, seeking to know, comfort, inspire and direct the spiritual life of all for the glory of the Lord.

Bro. Waggoner attributes his success and usefulness, whatever they are, to a happy combination of circumstances and influences far beyond his own ordering. The piety, industry and faith instilled in his childhood, in the home where the Lord cast his lot, lie at the foundation. He feels that he has always had the prayers of the church, and tries to live in close fellowship with the Father who has so mysteriously guarded, preserved and directed his life.

The counsel of his brethren of experience and wisdom has been always most welcome and fruitful of good. For help and guidance in everything he looks to the Lord, believing that to be strong in the Lord and in the power of his might is the best of all strength.

Directions To The Grave Of John & Ann Waggoner

John G. Waggoner was a well-known and respected preacher in Eureka. During his work he added over 1000 people to the church. He died March 8, 1929 at 84 years of age. He is buried in the Olio Township/Eureka Cemetery in Eureka, Illinois. Eurek is located just east of Peoria on Hwy. 24. In Eureka's town center turn right on Hwy. 117. and go past Eureka College, and you will see the cemetery on the left. This cemetery was at one time the old Eureka Christian Church Cemetery. The building has long been gone. Enter into the main entrance of the cemetery and look up ahead at where the cemetery office is located. You will want to pass in front of the office and to the top of the hill. The Waggoner plot is on the right. Also buried very near the plot are the graves of two Eureka College presidents, Louis O. Lehman, and Ira W. Langston. 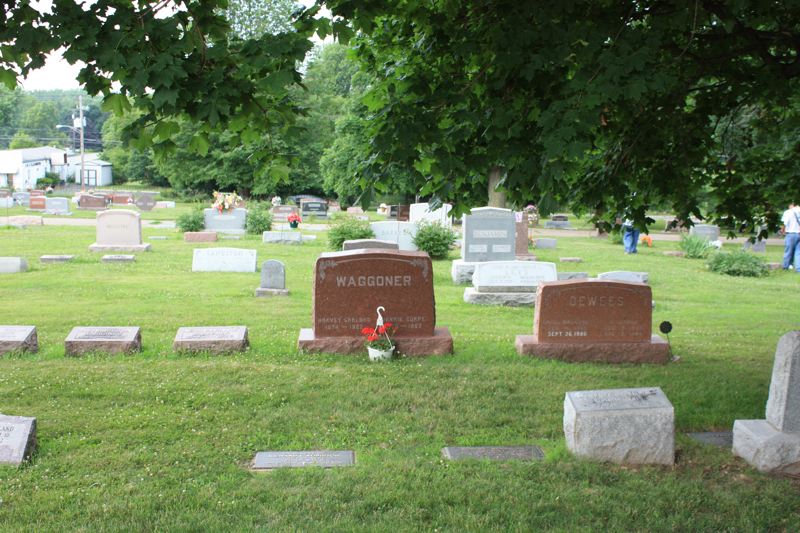 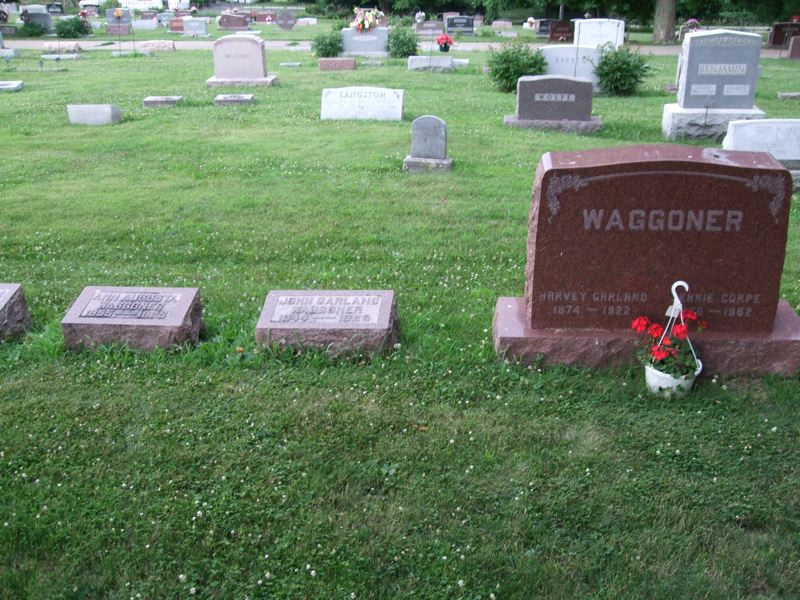 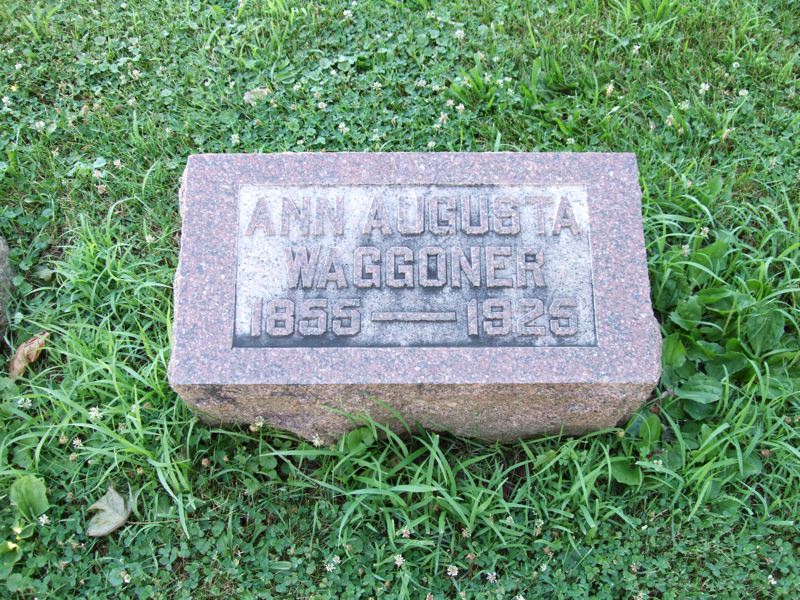 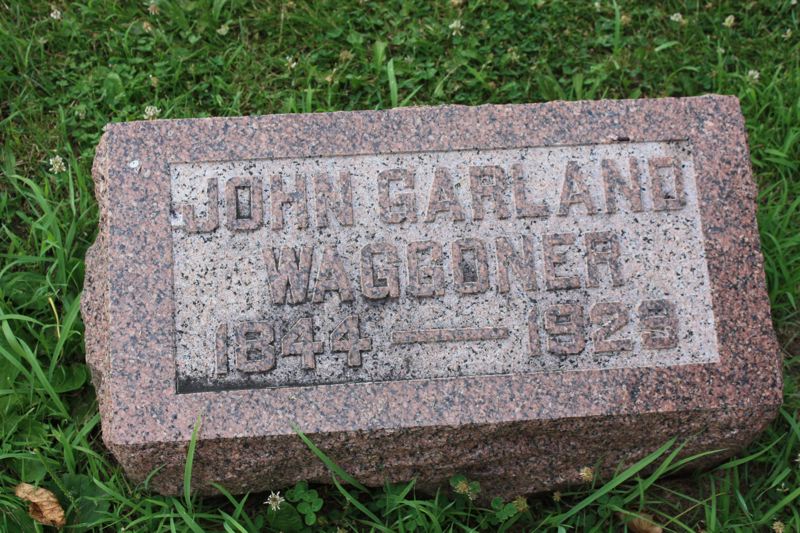