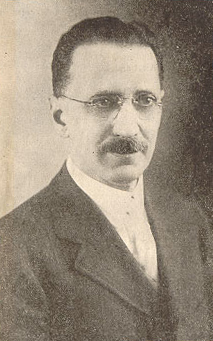 The Passing Of H.H. Adamson

On May 20, 1944, H. H. Adamson, one of the greatest and most beloved preachers in the church, passed from this life to the eternal home. He was born in Springville, Ind., November 10, 1870. He would have been seventy-four years old his next birthday.

After finishing the school in his home community, he entered the Bible Training School conducted by W. H. Krutsinger at Elliottsville, Ind. Brother Krutsinger was a good Bible scholar and a great teacher. Many young men were trained for the work of the Lord in his school. Though he passed away many years ago, his influence is still being felt in the church through his boys who are still preaching.

After finishing the Bible Training School, Brother Adamson attended the college at Mitchell, Ind. But his training did not stop with his time in school. He has been a student all his life, developing a keen mind and a profound knowledge, not only of the Bible, but of many kindred subjects. He was indeed a deep thinker and was known far and near for his wisdom and sound judgment. His counsel and advice were sought by all who knew him. He seemed to know what to say, what not to say, when to say it, and, most of all, he knew when to keep still.

He began preaching at the age of eighteen, and soon his services were in demand. He never wanted for a place to preach and turned down many calls for meetings that he could not possibly hold. In 1899 he was called to locate with the church in Bloomington, Ind. He labored part time with this congregation for a number of years, and finally gave almost all of his time to this work. This church had a steady growth under his influence, and ultimately had to construct a new meetinghouse. This house still stands a monument to his work, and indeed is a splendid building.

While giving part time to the work in Bloomington, and even before taking the work there, he preached for my home congregation once or twice a month for fifteen years. It was fifty years ago this fall that he began preaching for my home church. He was to be with it in a meeting in celebration of the long service he had rendered. I was baptized by Brother Adamson on October 23, 1901. From that day to this he has been all that a father could be to anyone. I could always go to him for help of any kind. He shared in my sorrows, in my trials, and in my joys. We truly loved as father and son. No task was too hard for him to do for me. A short time before his last illness he wrote asking that when he passed on I would speak at his funeral. He said: "Make the service simple; I think you know how to do it."

After spending eighteen years in Bloomington, Ind., he located with the church in Lewisburg, Tenn. He labored there for five years, 1918 to 1923. He has returned several times for meetings, and was held in the highest esteem by the congregation.

In 1923 he located with the church in Woodsfield, Ohio, and labored there for five and one-half years. He then accepted the work with the Vinewood congregation, in Detroit, Mich., from 1929 to 1941. This church grew and developed into one of the finest congregations in the brotherhood. At nearly every service the auditorium and the basement were crowded. All the churches in Detroit, with their ministers, sought his advice and judgment in matters concerning their work. He felt the strain of the work was too much for one of his age, and sought to find a small town with a small congregation in which to labor. He had several calls to locate with large congregations; but he wanted to be relieved of such strenuous work, so located with the church in Franklin, Ky. He was delighted with his work, and was greatly loved by the congregation. No church could have stood by a preacher better than did the brethren in Franklin.

In all his labors Brother Adamson never left a work at the request of the elders and could always return if he so desired. He never lacked a place to labor, but had many calls for located work and for meetings that he could not fill. No church where he has labored has ever departed from the faith. He was in deed and in truth a great preacher.

I believe that were David on earth today he would say of Brother Adamson: "Know ye not that there is a prince and a great man fallen this day in Israel?" He loved the truth and stood ready at all times to defend it. He was kind and gentle, but had no compromise for sin or for false doctrine. He was, however, very diplomatic and usually worked things out with little harm being done. He was meek and humble, and yet at all times dignified, whether in the pulpit, in the home, or on the street. He commanded the respect even of his enemies in the work of the Lord. His loyalty to truth and righteousness was never questioned by thotse who retlly knew him. He loved the church, and was ready at all times to give his very best for the work of the Lord. Some may have surpassed him in one way or another, but, all things considered, he was unsurpassed as a preacher. He was a splendid writer; and when he gave himself to writing on any subject, he left little to be said; yet he was able to express himself in few words. Many have been encouraged by his personal letters. It was easier to go on with your task after having read them.

Brother Adamson did not accomplish all this alone. In 1892 he was united in marriage to Miss Flora Mae Krutsinger who has been his constant helper and has ever been hand in hand and heart and soul with him in the work of the Lord. Three children were born to this union. Two have preceded him to the eternal home. He leaves to mourn his passing his devoted wife, one daughter (Mrs. Ralph W. Barns, of Red Bank, N. J.), two granddaughters, and one grandson, with other relatives and many friends throughout the land. His work led him into nineteen states, the District of Columbia and Canada. He has baptized hundreds and performed many wedding ceremonies. He took a great interest in those whom he had united in marriage and those whom he had baptized. He was called far and near for funerals and had a deep sympathy for those in sorrow. Truly a man of God and a prince among men has passed from us. But his works will live on. Eternity alone can reveal the influence of this great man.

Directions To The Grave of Homer H. Adamson

Homer H. Adamson is buried in the Rose Hill Cemetery in Bloomington, Indiana. From Indianapolis, head south on I-65 to Columbus. Take Exit 68 and go west on Hwy. 46. In Bloomington, take Hwy. 46 Bypass north around the city. On the north side, take Hwy. 45/37 and go south to W. 3rd St. and head toward town. W. 3rd becomes S Adams St. and bear right on W. Kirkwood Ave. Turn right on S. Elm St. Enter the cemetery and take the first right. Go to the second section on the left and look in about two rows, and you should see the Adamson plot. While in the cemetery be sure to visit the grave of another gospel preacher, A.W. Harvey. Plot Info: Section N. Lot 33. GPS Location of grave: 39.166127,-86.546153 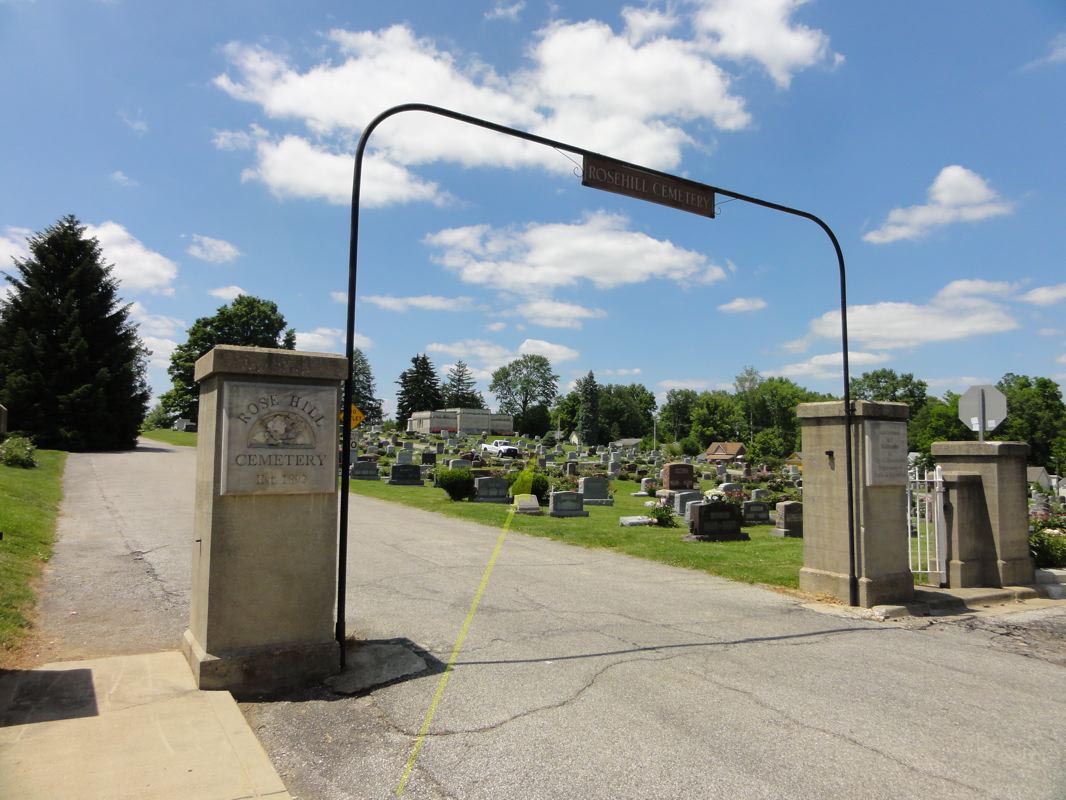 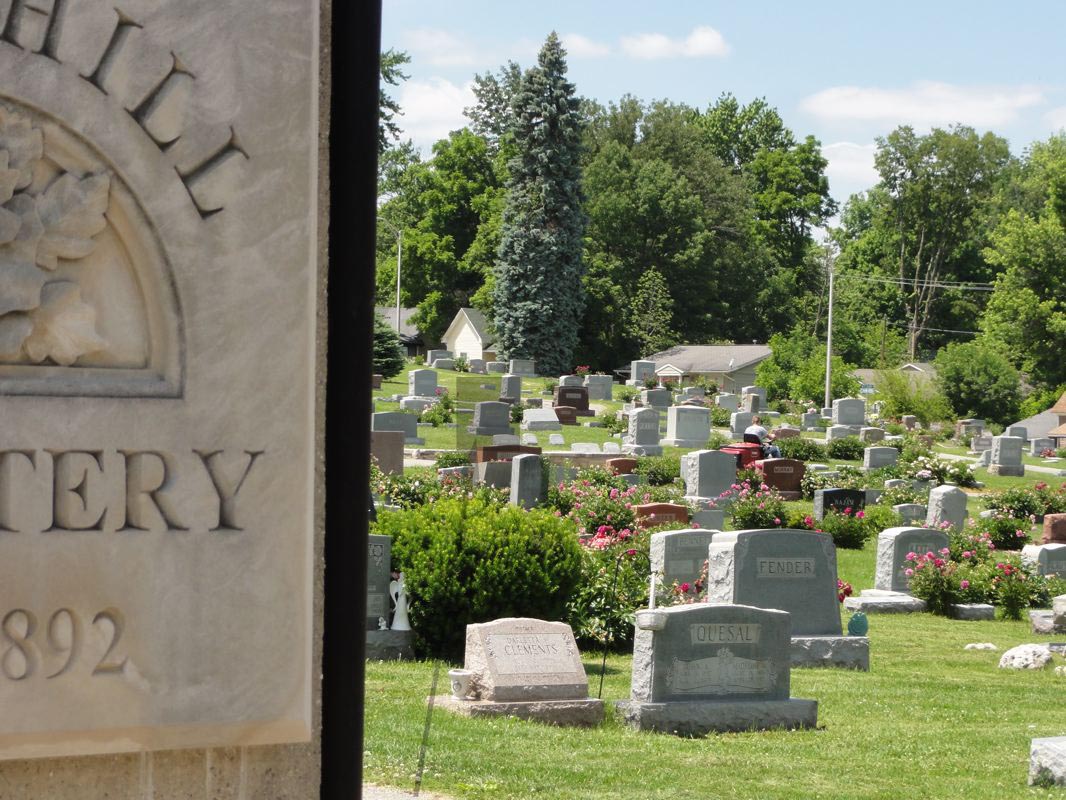 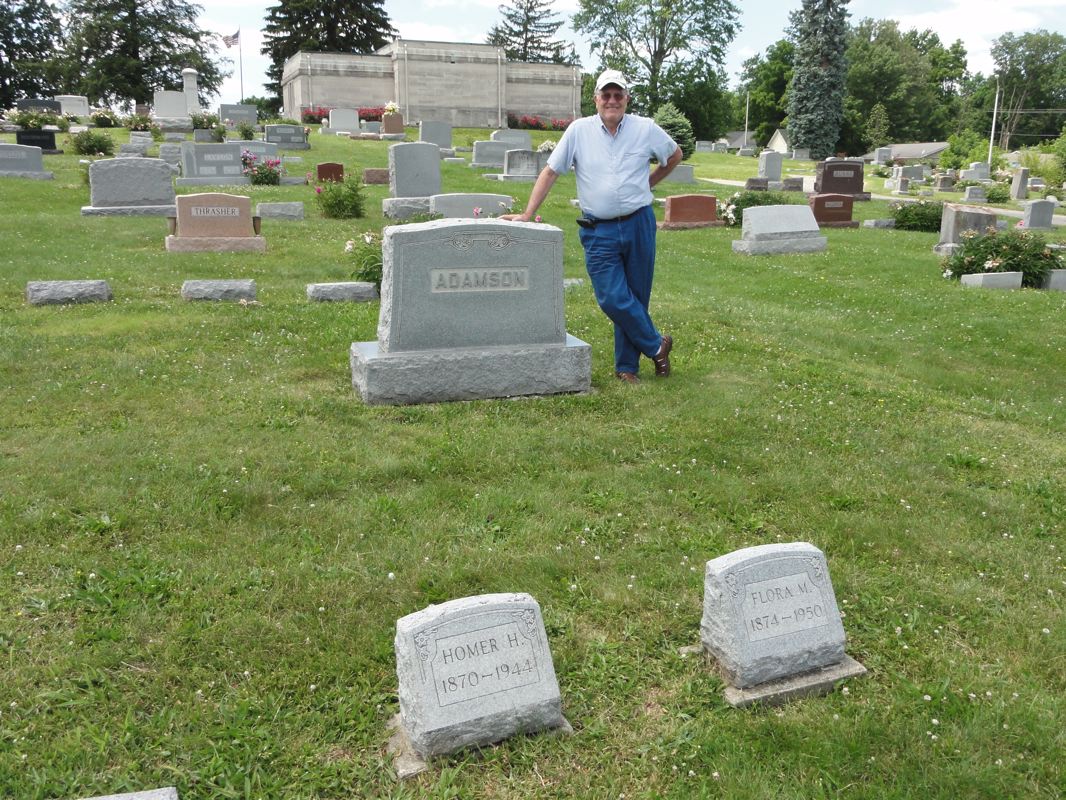 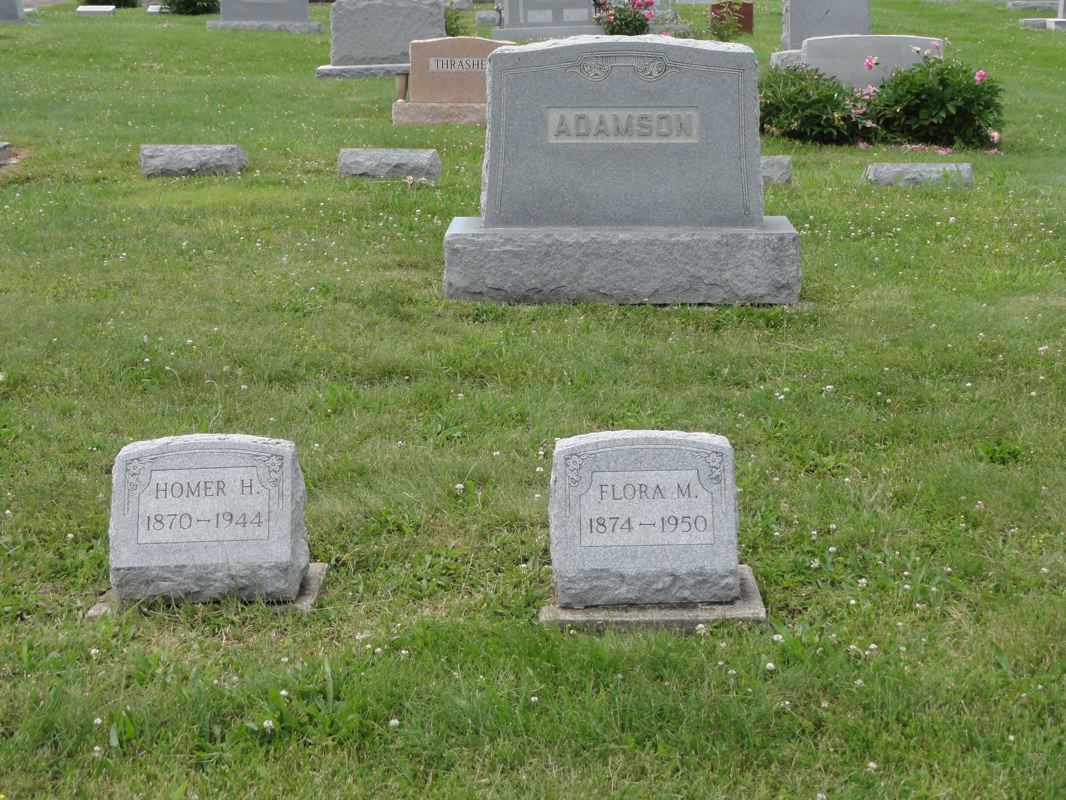 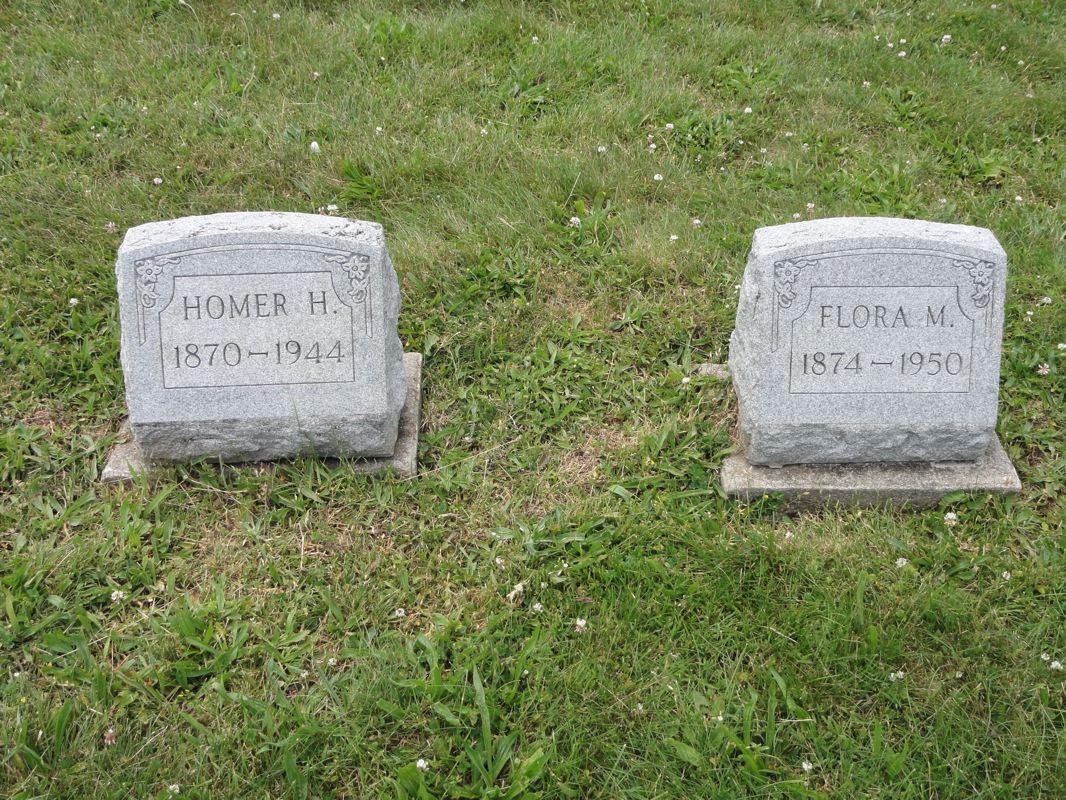 Web Editor's Note: On May 22, 2012 I visited the grave of Homer H. Adamson. It was the second day of a week's Restoration Research trip with my dear friend Tom L. Childers. H.H. Adamson was buried in Bloomington, Indiana. It was a very busy day as we were making our way to Indianapolis to spend the evening with our dear friend Terry J. Gardner. Special thanks to Tom for doing the driving on this trip.