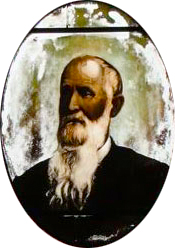 Dr. John Wesley Newland was born in this county in 1827, died in  October, 1909. He studied with his cousin. Dr. Benjamin Newland, of  Bedford, graduated at the University of Louisville, came to Bedford in 1857,  was two years at Leesville and was in active practice in Bedford till he retired in 1900. He was very successful in a business way. He was a popular  preacher in the Christian church many years and was an elder in the First Christian church at Bedford over fifty years. He enjoyed a distinction which rarely comes to any man, having ushered one baby girl into the world, as attending physician; officiated as minister when she was married; ushered her eldest daughter into the world and performed the ceremony when she was married. His death was touching, in that immediately after he offered a fervent prayer in the First Christian church, he was stricken with apoplexy and died.

Dr. Benjamin Newland, born in this county in 1821. The son of William Newland, was for many years one of the most prominent physicians in all southern Indiana, being in 1879 president of the State Medical Society. He died April 5. 1889. 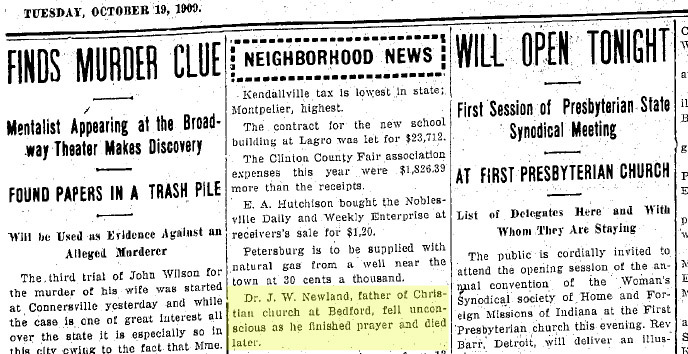 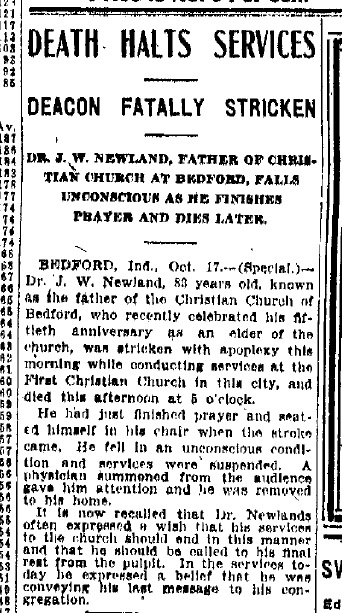 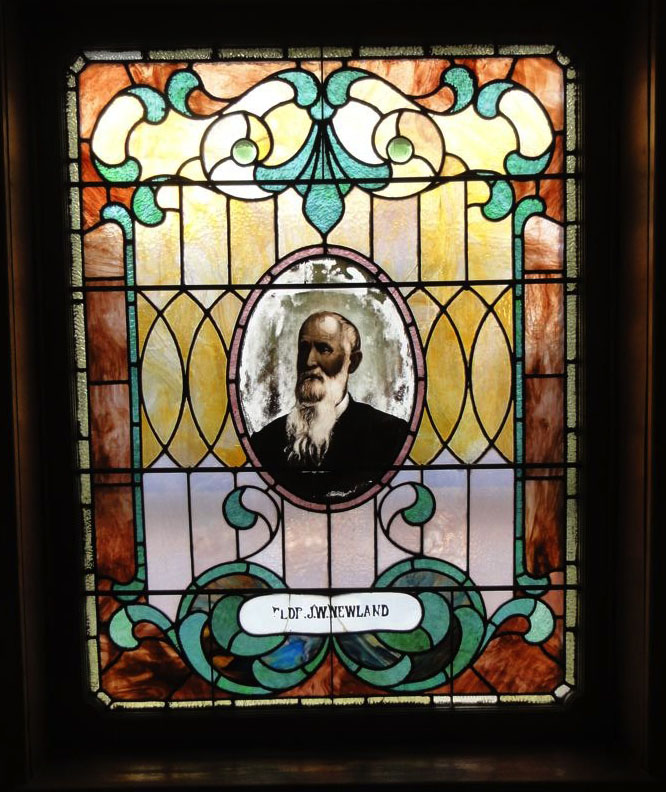 ELDER J. W. NEWLAND was born in Lawrence County, Indiana, July 26, 1827. He was raised on a farm. At the age of nineteen, he began the study of medicine. After graduating, he began the practice of his profession at Leesville. coming to Bedford in 1854. October 1, 1848, he married Sarah E. Duncan. Our Church History says "The coming into its's membership of Dr. J. W. Newland meant much to Bedford church." As long as he lived, he was ready at all times to supply the pulpit in the absence of a regular preacher. He was a very liberal giver. He visited the sick, both as a physician and as a spiritual adviser, conducted hundreds of funerals and performed many marriage ceremonies. He was a life-time elder. He was stricken in the pulpit on October 11,1909 and died a short time later.

Directions To The Grave of John W. Newland

The Newland family burial ground is locate in the Green Hill Cemetery in Bedford, Indiana. The cemetery is located on 1202 18th Steet, Bedford. From the entrance, go down the hill and up the next into what is probably the center of the cemetery. Look for a pink monument with a large globe on it, just off the center circle. This is the Newland plot. While in the cemetery, another grave of interest is that of Dr. Benjamin Newland, (Find-A-Grave) murderer of the gospel preacher, Madison Evans. Benjamin was the cousin of J.W. Newland. Both were doctors in the city. Also buried in the cemetery was P.B. May and J.M. Mathes. 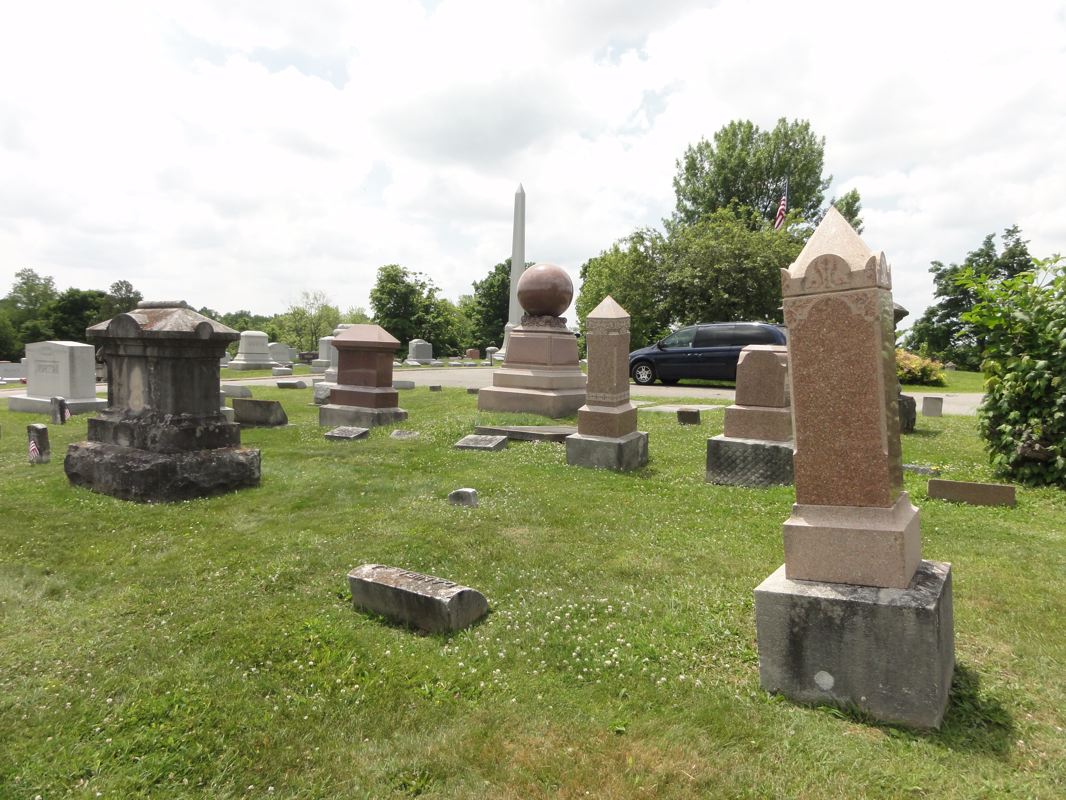 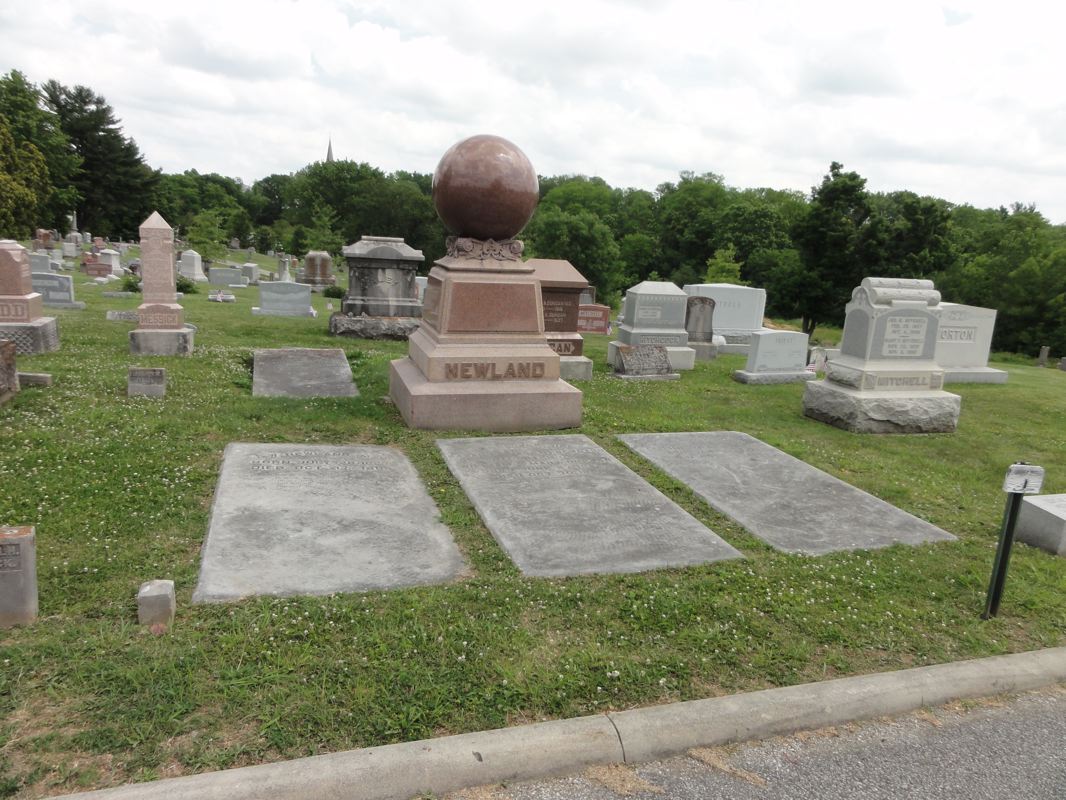 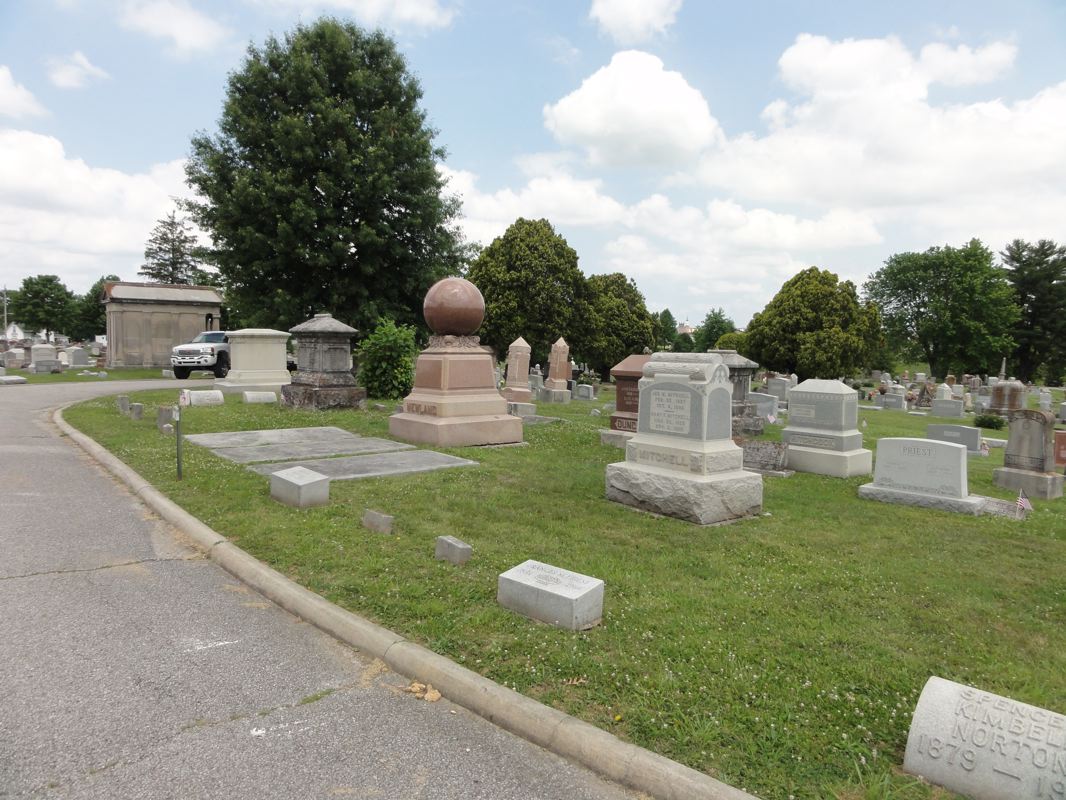 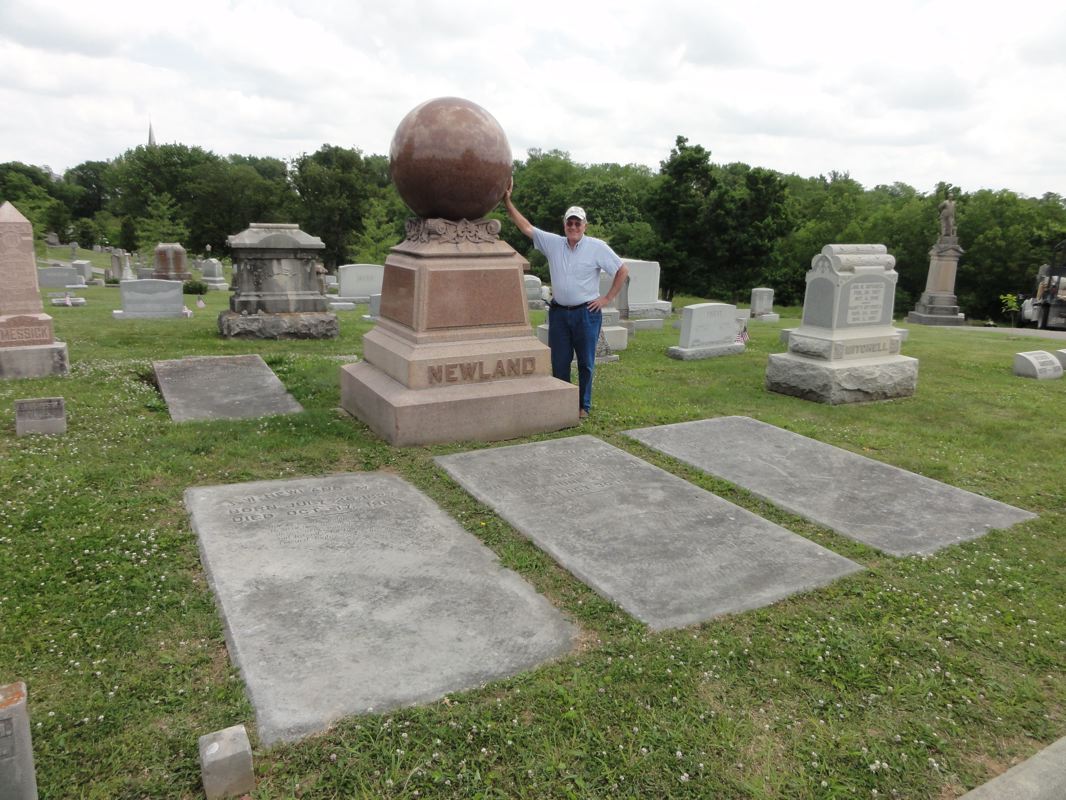 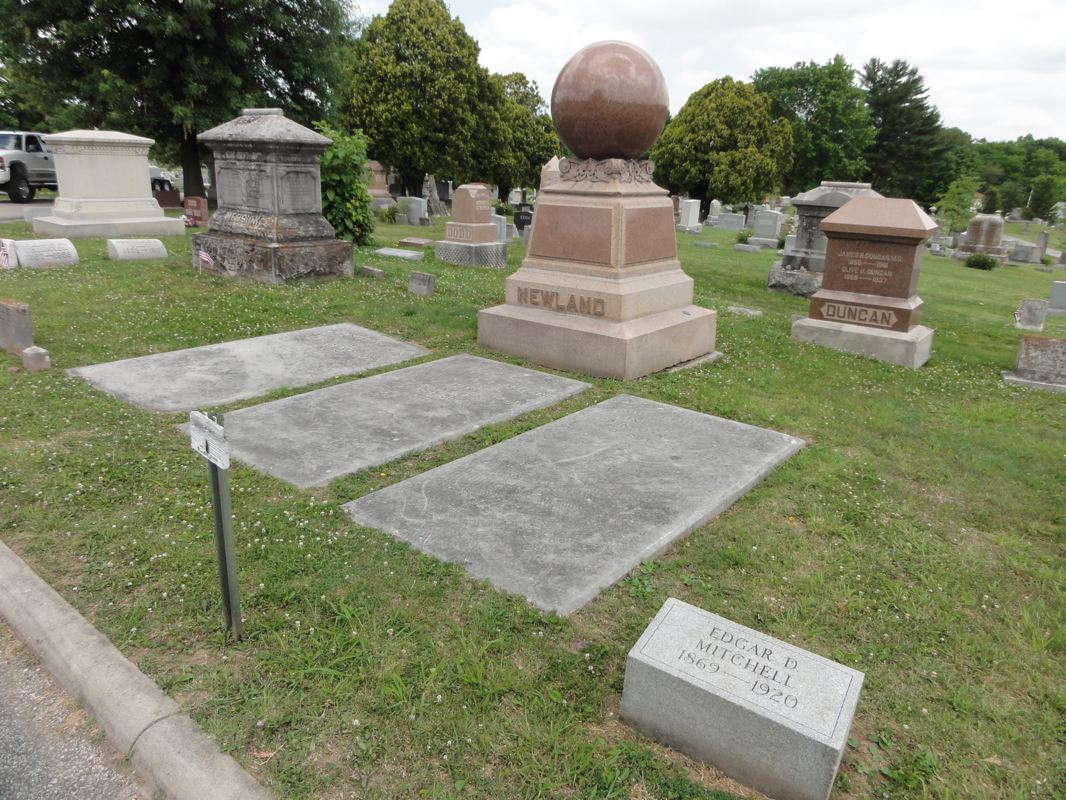 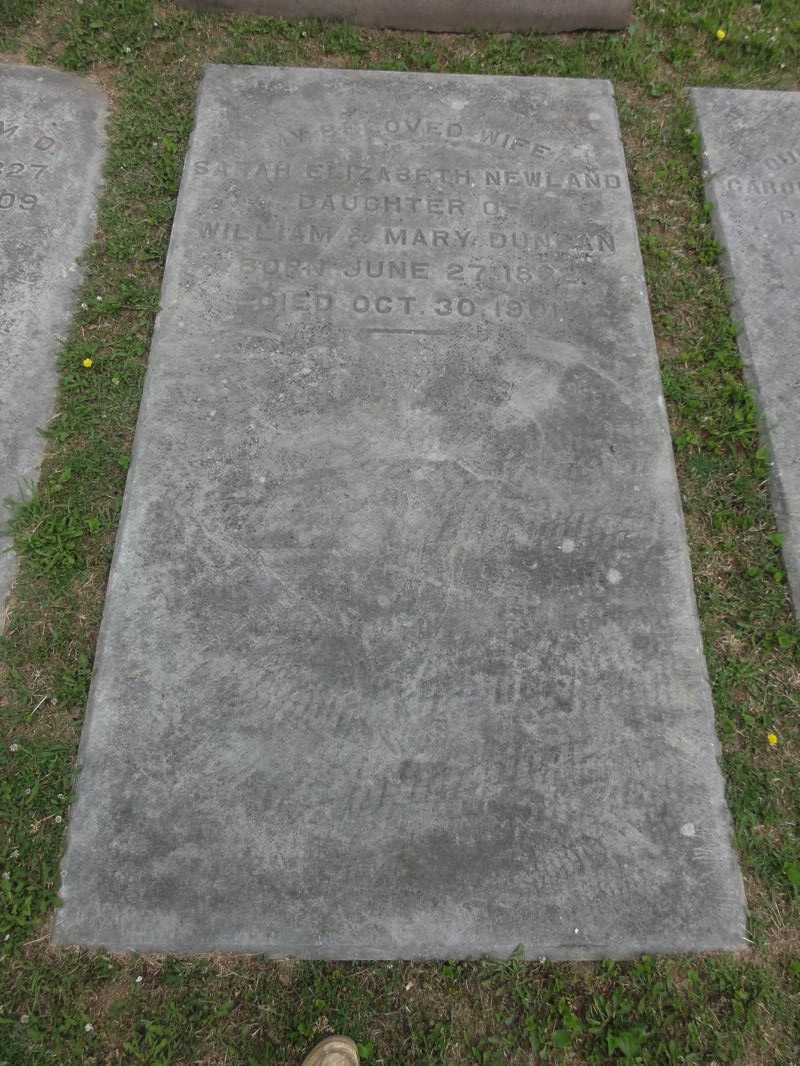 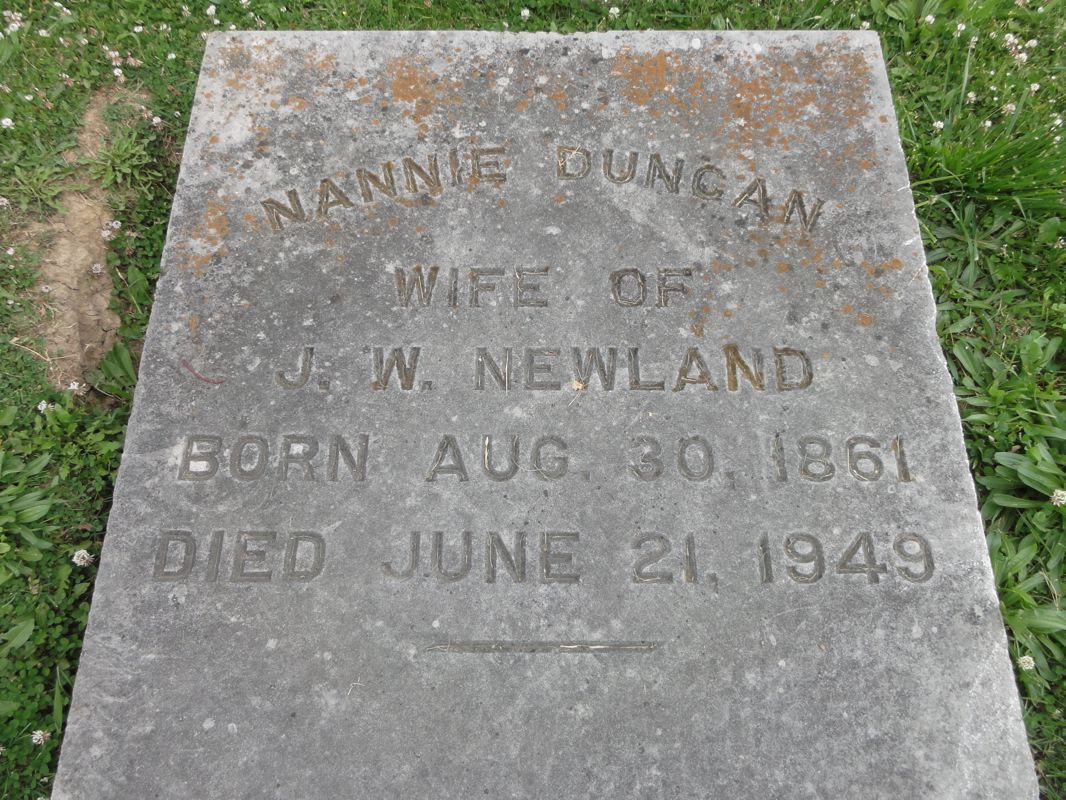 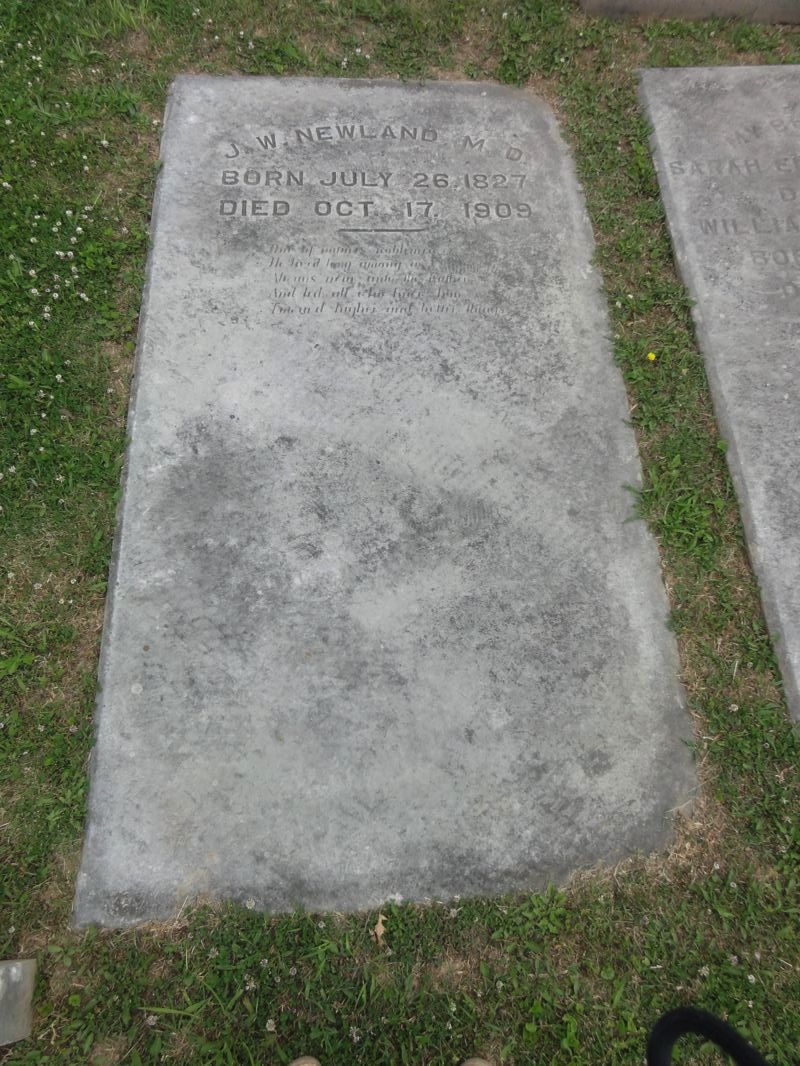 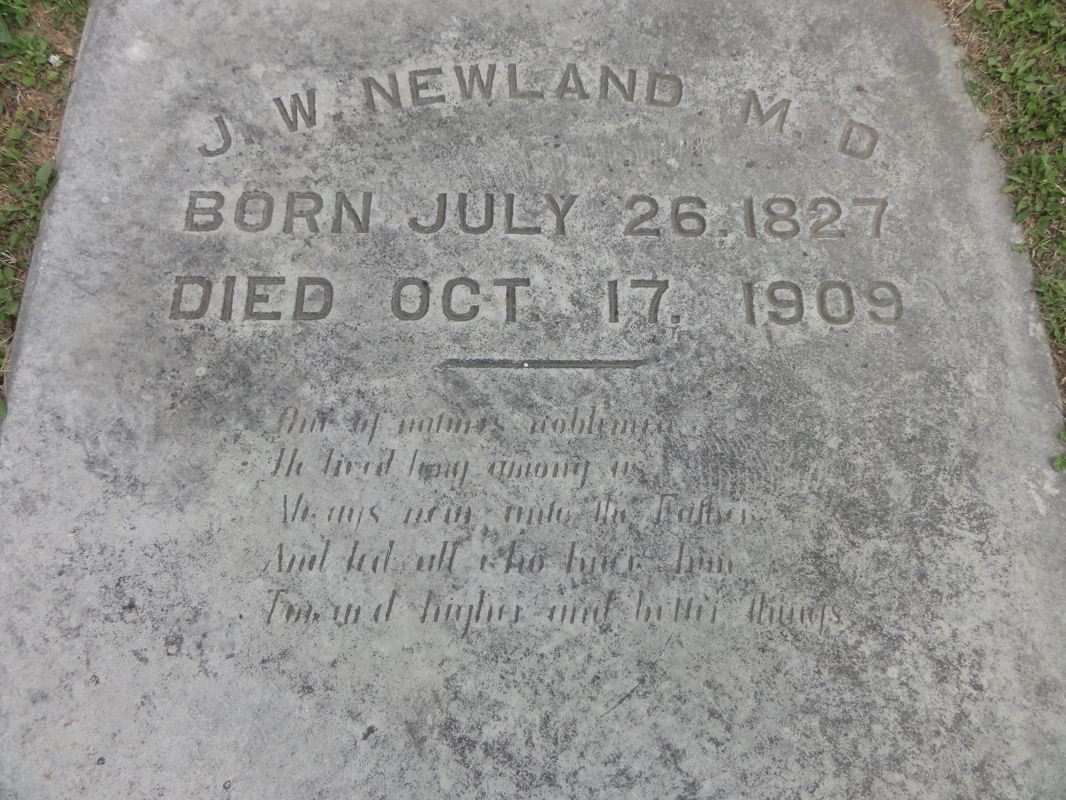 J.W. Newland M.D.
Born July 26, 1827
Died October 17, 1909
One of nature's noblemen
He lived long among us
Always nigh unto the Father
And led all who heard him
Toward higher and higher things

Web Editor's Note: On May 22, 2012 I visited the grave of J.W. Newland. It was the second day of a week's Restoration Research trip with my dear friend Tom L. Childers. Newland's grave was in the cemetery at Bedford. We had visited the Greenhill Cemetery twice and was heading out of town when we realized that J.W. Newland was buried in the Greenhill Cemetery. Thus, we turned around and went back to the cemetery to find J.W. Newland's grave.
It was a very busy day as we were making our way to Indianapolis to spend the evening with our dear friend Terry J. Gardner. Special thanks to Tom for doing the driving on this trip.