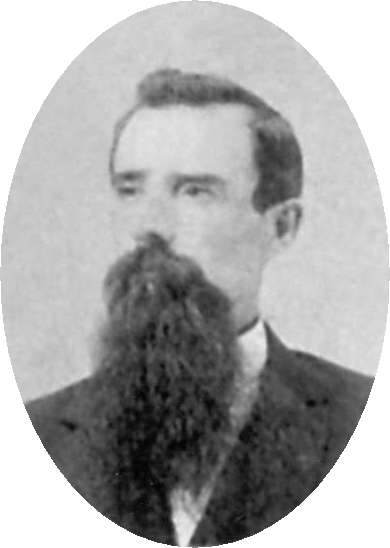 Born in Perry, Indiana, USA on 3 Dec 1850 to Elias Terry and Eleanor Sandage. Judge Emery married Margaret Jane Walters and had 13 children. He passed away on 17 May 1923 in Orleans, Indiana, USA. He was buried in the Fairview Cemetery in Orleans, Orange County, Indiana.

Judge E. Terry was a gospel preacher, known and beloved by many in southern Indiana. In 1899, his picture was added to David S. Ligon's Portaiture of Gospel Preacher.

Sorrow claims an abiding place in my heart when I learn that Bro. J.E. Terry, of Orleans, Ind., has passed in the Eternal.

It was some twenty-seven years ago, when I was living in the home of Bro. Noah Rush, at So. Boston, Ind., that I first met Bro. Terry. I was then but a poor orphan boy with ambitions and desires which but few would class above undependable bubbles of day-dream fancy. But he saw, or thought he saw, a chance of at least my becoming useful, and was, through the rest of his life, my helper and teacher.

I think of him most of all as a teacher, for that was his realm. While his wisdom and knowledge towered above me, yet he never consciously allowed it to overawe mehbhii. He never scorned my ignorance nor disdained my inability to comprehend. With patience superior to my own, he led me from my limited known to its kindred unknown as far as I was able to comprehend, and then gave me food for my own thought and meditation.

Bro. Terry was a life-long, diligent student. Diligence extended to where he became a recognized scholar. His was an analytical mind. His conclusions were the natural consequences of his reasoning. He labored to have a message for the people and his labors were not in vain. In each utterance dwelt a volume of thought. He was not a sermonizer. To be true to the teachings of God's word, was the highest of his life's ambitions; consequently he was careful of his public statements. When a new thought was presented to him it was carefully investigated before he reproduced it. He possessed the power to lead the thinking mind into depths unexplored. He presented a new thought a burning reality, or burnished an old one into a shining nowness.

A sublime teacher. Calm, self-possessed, thoughtful, void of speculation, and considerate. No excitable zealot was able was able to turn him from calm deliberation. He recognized in others their power or greatness, but attributed little to himself. He was considerate of others without reaching the line of compromise.

Quiet, unassuming and given to bashfulness; at all times uneasy among strangers, while among his intimate friends was at perfect ease. His timidity was his weakness. Of this he was perfectly aware; and has often said to me: "Tis hard for a leopard to change his spots." Had he possessed the oratory of a Webster, his name would have circumnavigated the globe.

He was not an orator. We seldom find orator. We seldom find orators possessing his type of mind. Neighter did he seek renown among his brethren. And yet, who, that knew him, has not recognized his greatness! When the unlearned conversed with him hi expressed his wisdom in the words of their understanding, and the scholar left his presence feeling that he had imbibed wisdom unexpressed or knowledge humbly stated.

His writings were not extensive. There was too much timidity in his nature voluntarily to offer his productions. As a writer he was clear, logical and forceful.

He engaged in a few public debates. In his hands the Truth never suffered. In every was he "quit himself like a man."

Brethren, a wise master workman has passed. His earth labors are over. His life, influence and teaching have permeated lives and shall not perish from the earth. May his type increase among the teachers of the Gospel.

Father, I thank Thee for his life and the influence has had upon myself and others.

By Ben F. Taylor, Wray, Colo.
Special Thanks to Terry J. Gardner for prividing this information - 10.9.2012

I was called to preach his funeral at Orleans Lord's day afternoon, that morning I preached in the church at Unionville, or Young's Creek, right when I hird(sic) bro Terry first time in my life, I was a wild boy, but he drew my attention, and that day I could & did regret part of his sermon. Subject: Pharial(sic) religion. Some man had said to me that day, when that preacher died you will be standing where he is now, and would not have believed

-S.R. Langford
Special Thanks to Terry J. Gardner for prividing this information - 10.9.2012 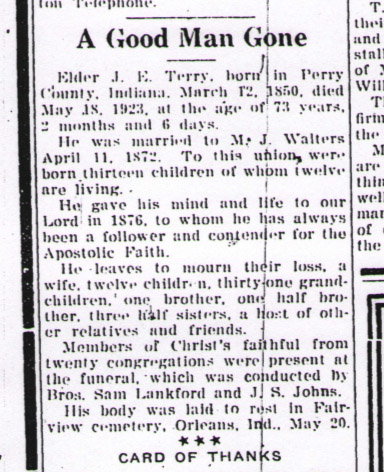 He gave his mind and life to our Lord in 1876, to whom he has always been a follower and contender for the Apostolic Faith. He leaves to mourn their loss, a wife, twelve children, thirty-one grandchildren, one brother, one half brother, three half sisters, a host of others relatives and friends.

Members of Christ's faithful from twenty congregations were present at the funeral, which was conducted by Bros. Sam Lankford and J.S. Jones. His body was laid to rest in Fairview cemetery, Orleans, Ind., May 20.

Directions To The Grave of Judge Emery Terry

The town of Orleans is located a few miles south of Bedford, Indiana. Heading south of Bloomington, through Bedford, on Hwy.37, go through Mitchell, and then into Orleans. Enter Orleans on N. Maple St. and turn right W. Adams. It will dead into Base Rd. Turn left and you will come into the middle of the cemetery. The newer part of the cemetery is where the grave of Judge Emery Terry is located. Turn right on W. Jefferson St. and turn right on the first drive. Head toward the end of the drive and stop. Go into the section about three rows where you will find the Terry plot. 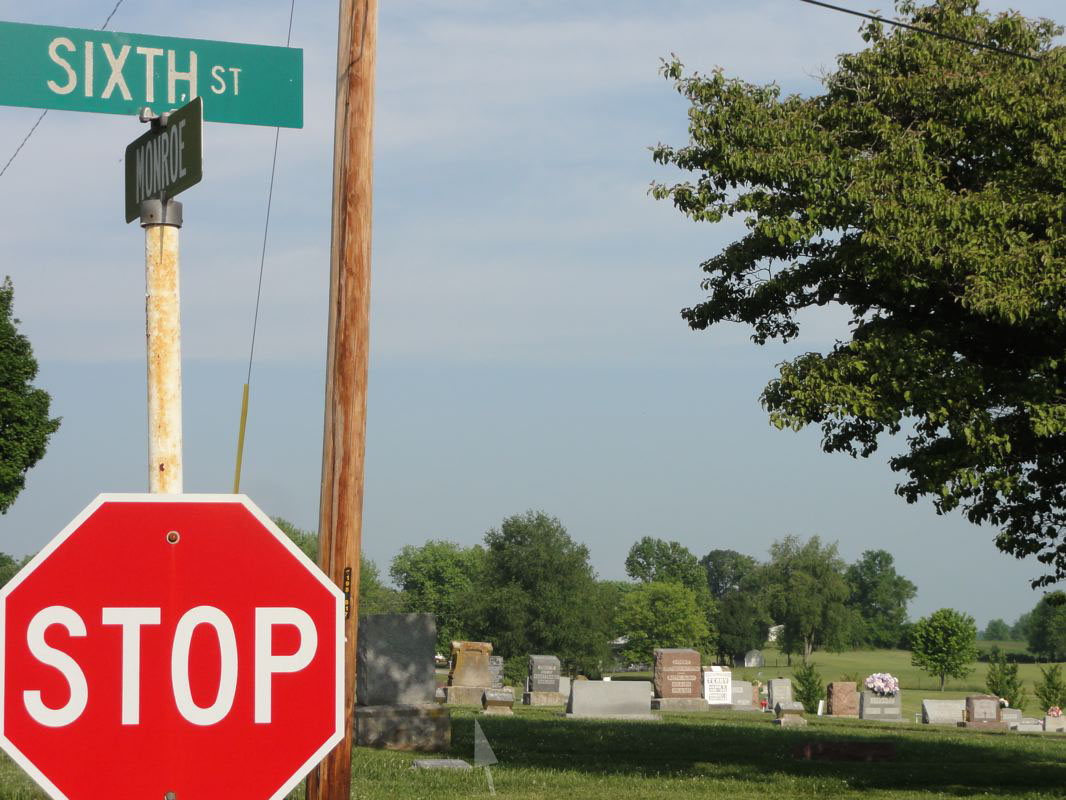 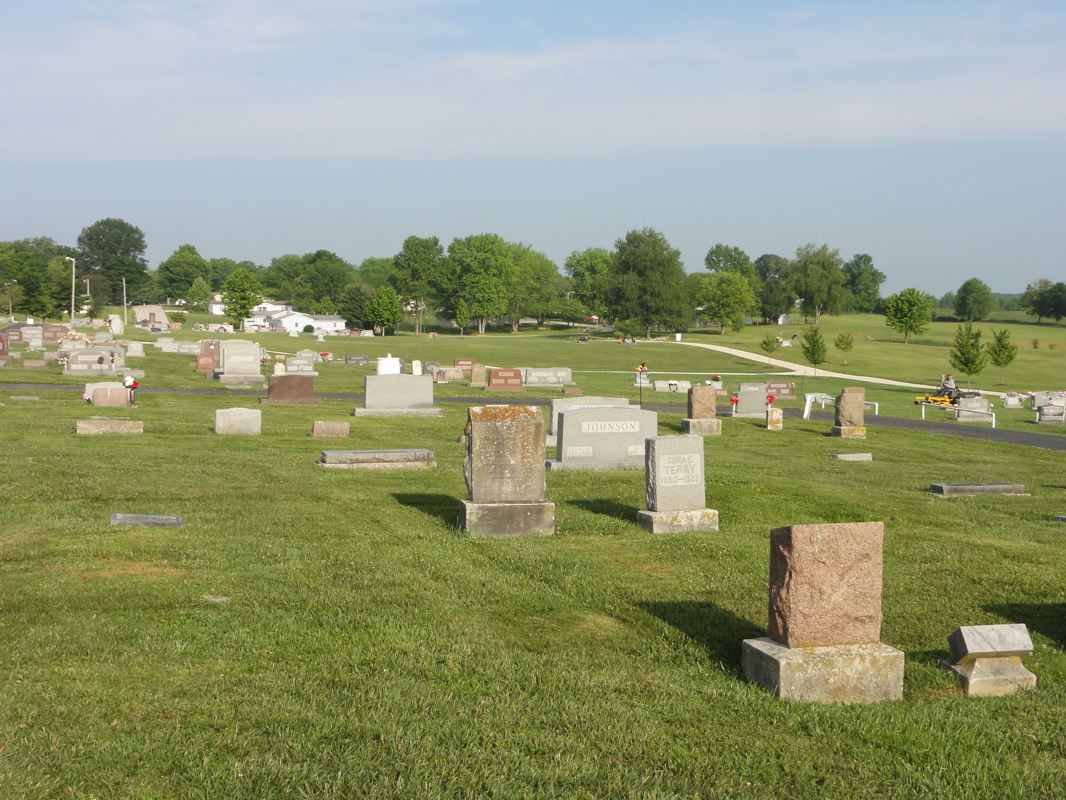 Grave of Judge Emery Terry as we initially found it 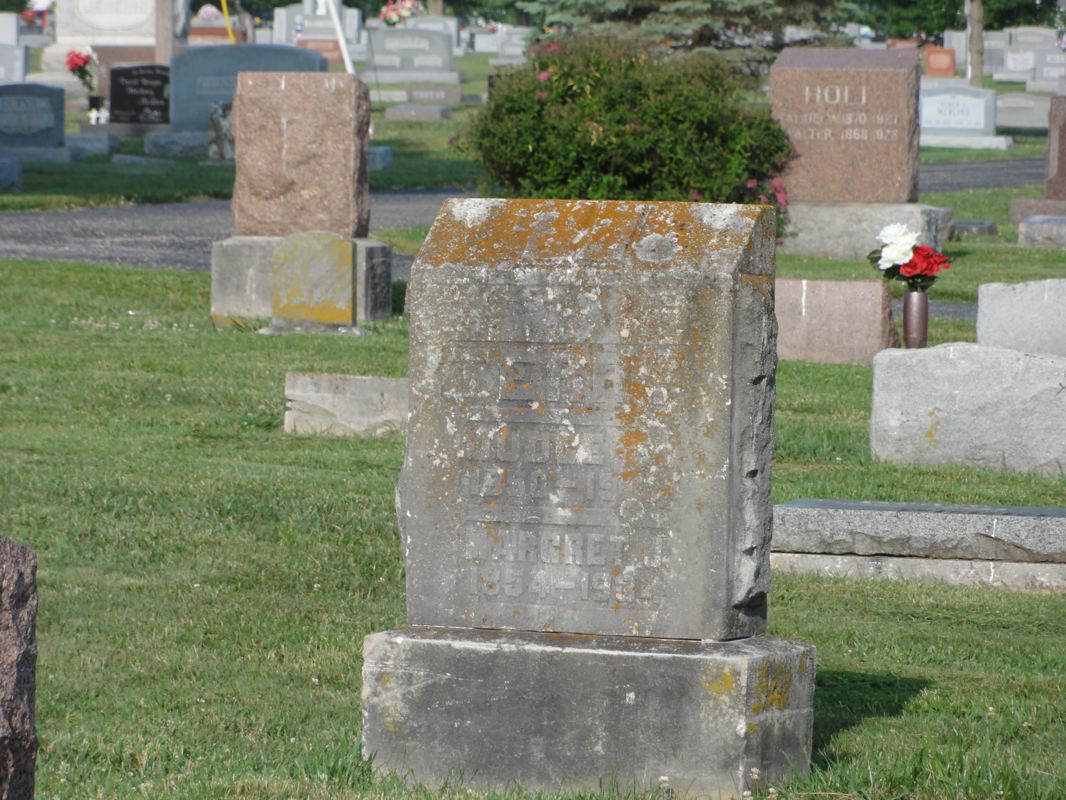 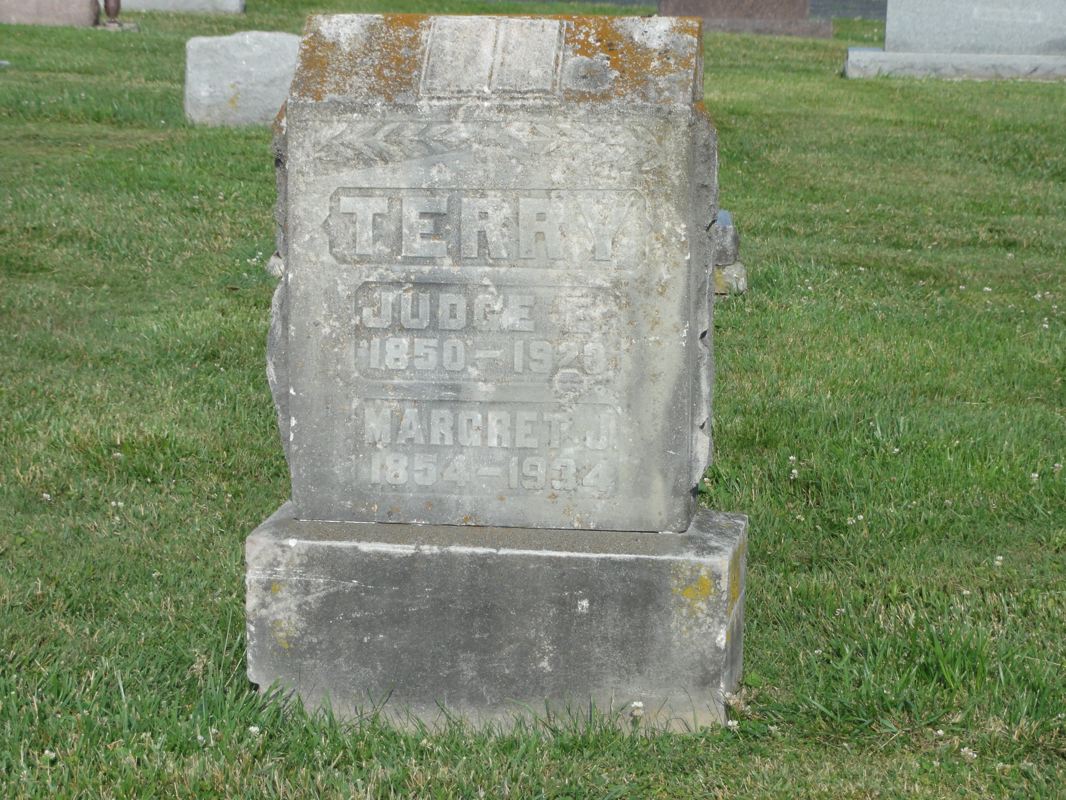 After cleaning the monument 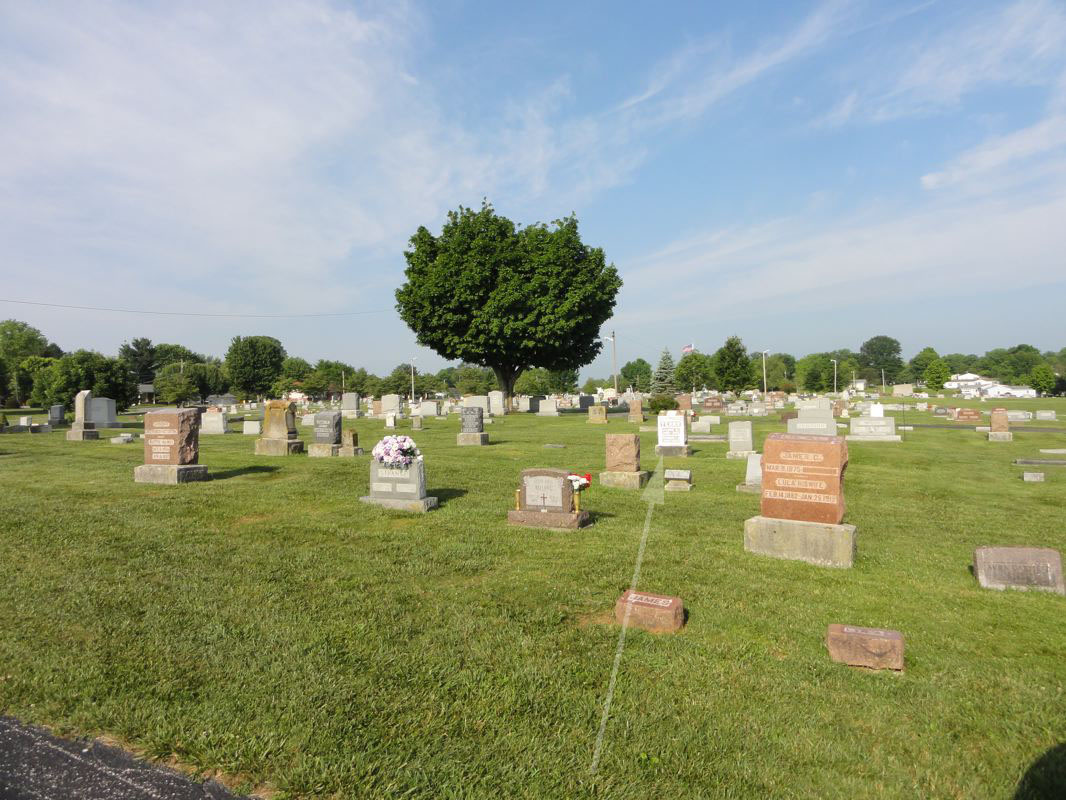 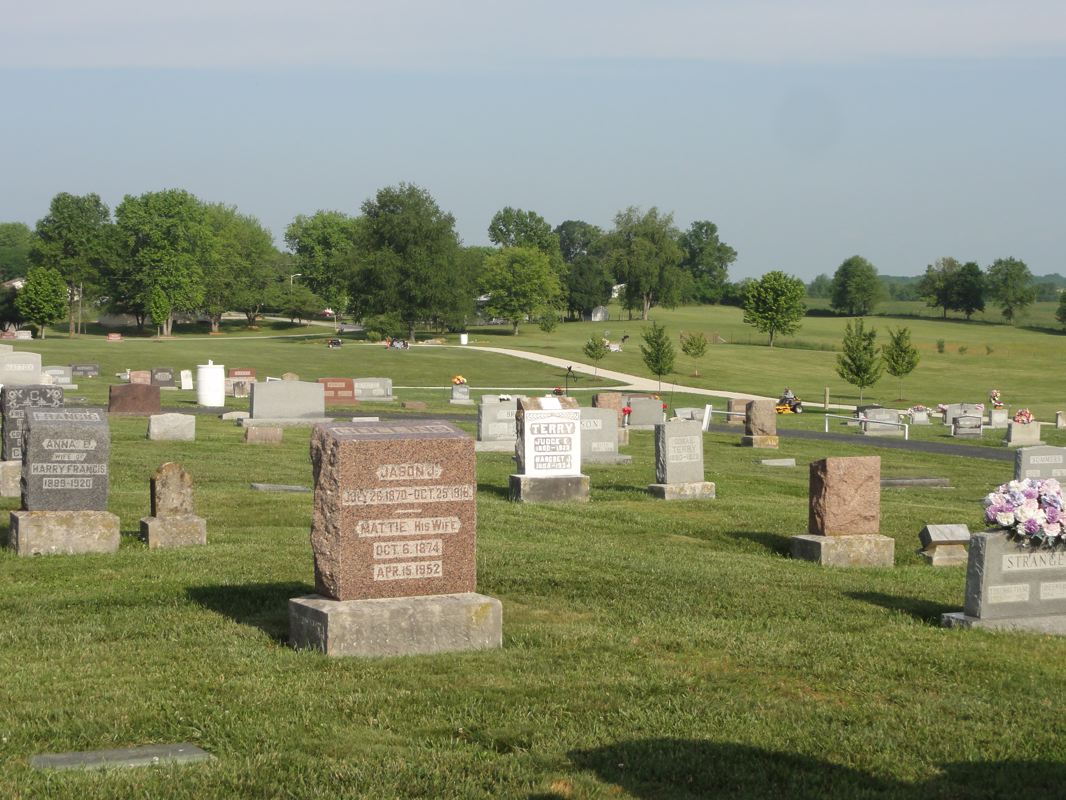 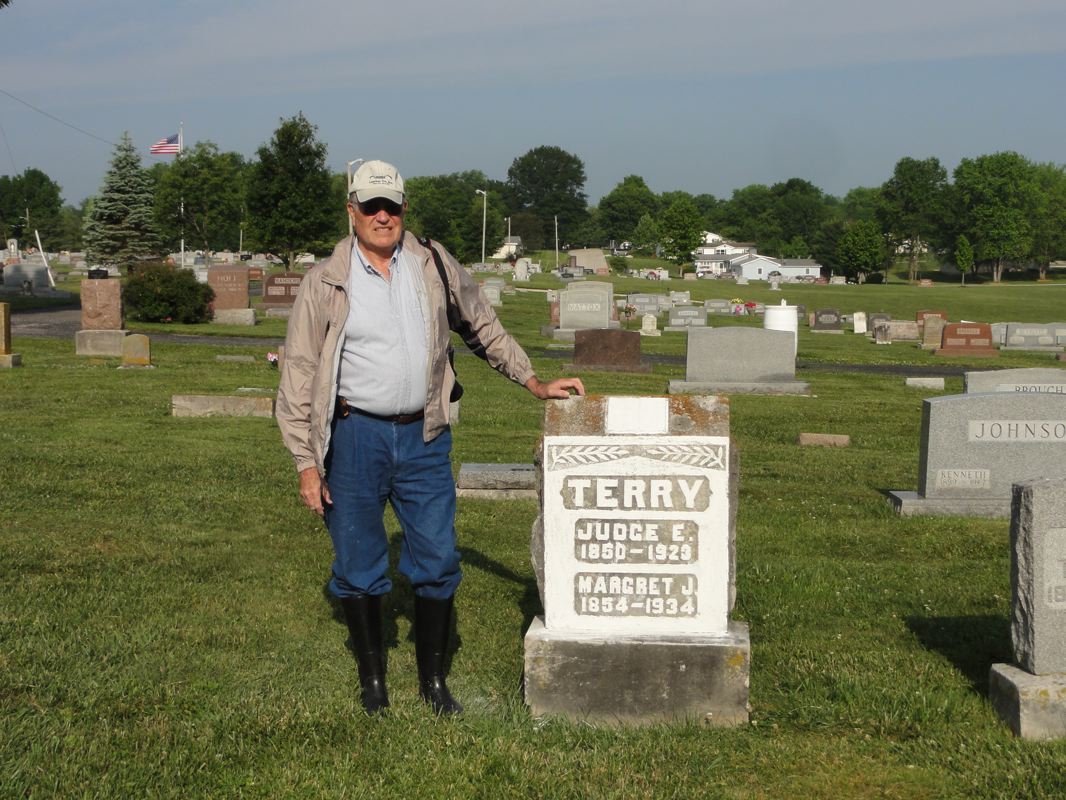 Tom L. Childers at the grave of Judge E. Terry 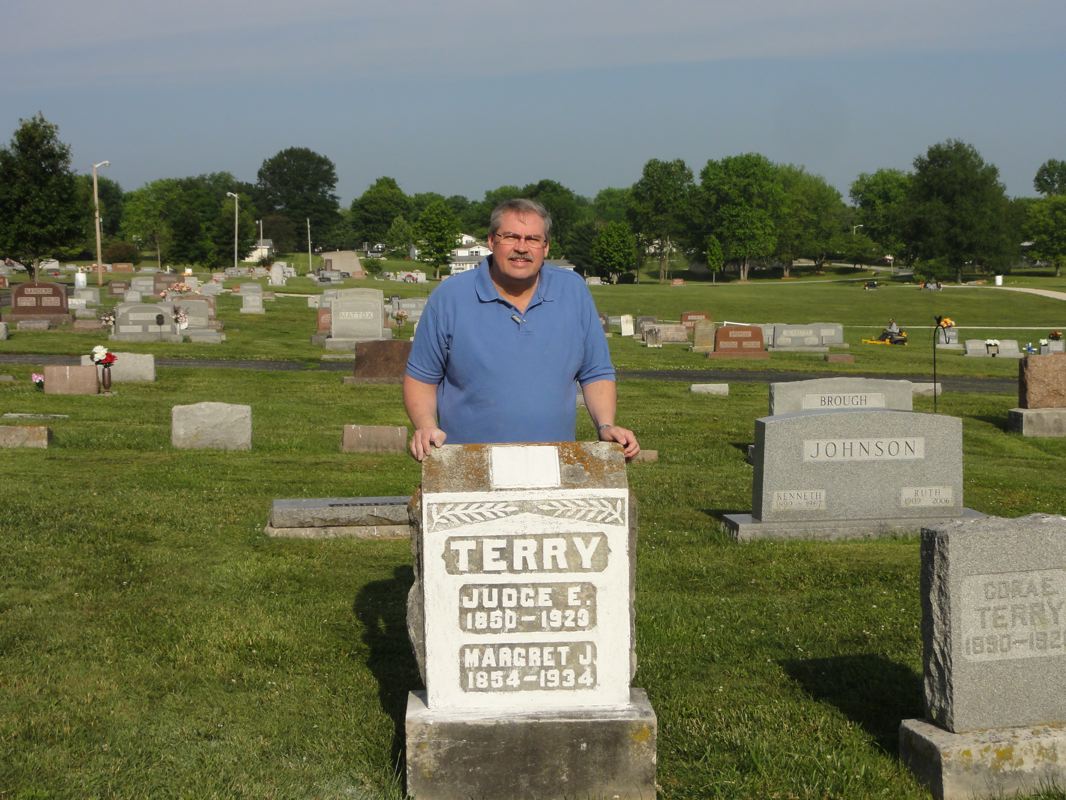 Scott Harp at the grave of Judge E. Terry 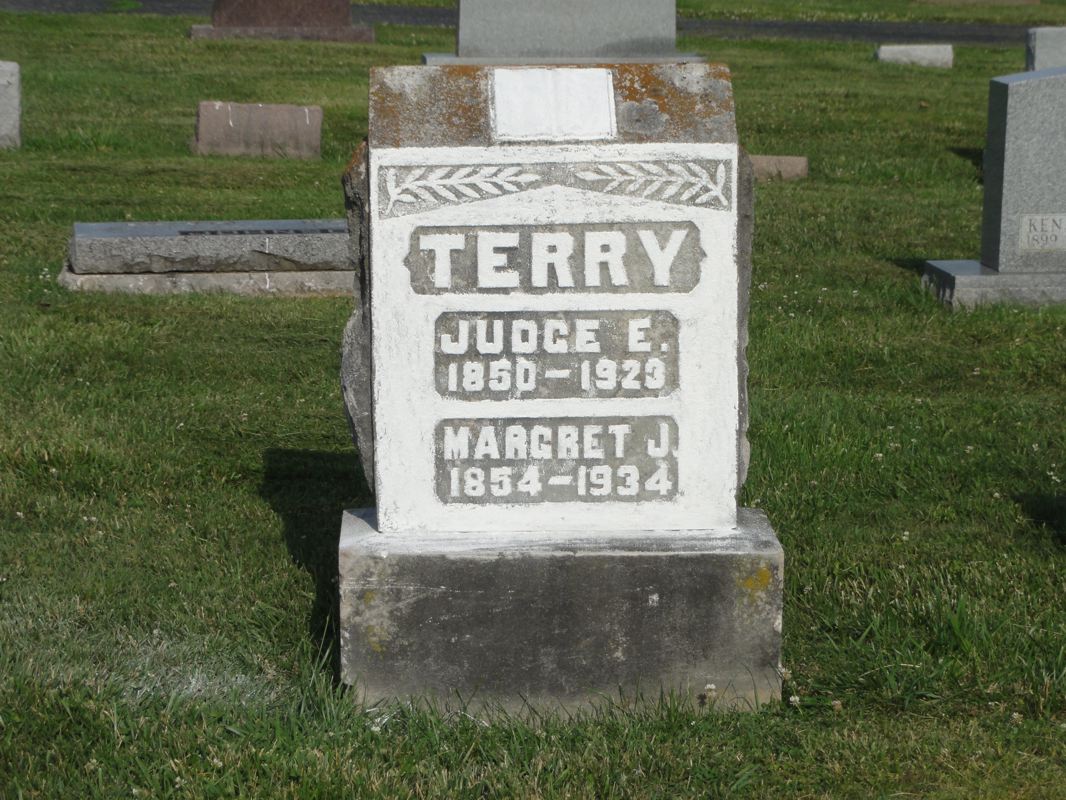 Web Editor's Note: On May 22, 2012 I visited the grave of Judge Emery Terry. It was the second day of a week's Restoration Research trip with my dear friend Tom L. Childers. Terry's grave was the second we found on a very busy day as we were making our way to Indianapolis to spend the evening with our dear friend Terry J. Gardner. Special thanks to Tom for doing the driving on this trip.