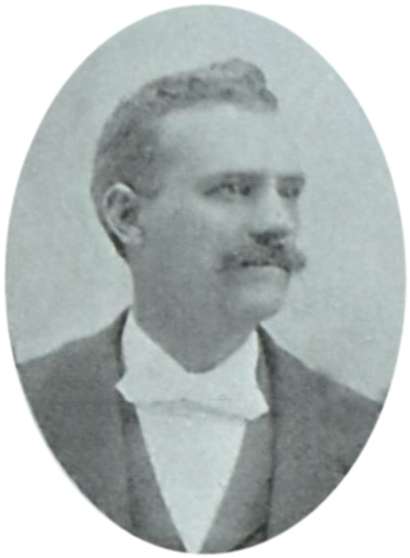 Biographical Sketch On The Life Of D.T. Broadus

David Thompson Broadus was born December 2, 1852, in Garrard County, Kentucky. He was raised on the farm and attended the public schools regularly until he was 18 years of age. After reaching manhood he took courses in some of the best schools, then he took a three-year course in a correspondence school, graduating with honors. At the age of 18 he began teaching, following that profession for ten years.

Also, at the age of 18 he obeyed the gospel and soon began public work in the church at his home.

On January 18, 1877, he married Miss Dusky Murphy. To this union six boys and one girl were born. The boys were: Clarence, Bernard, Otis, Emmett (died at age 6), Homer, and Paul (died at 4 years of age). The daughter was Amy (who died at 5 years of age).

Broadus began preaching when he was 28 years old and worked first with his home congregation for four years. In December 1884, he moved from Kentucky to Kansas, where he resided for two years, preaching the gospel.

At different times, he worked with the church at Bell Plaine, Kansas, over a period of 12 years.

From Kansas he went to New Mexico, where he spent three years in mission work. In November 1909, he began a work with a small congregation in Canadian, Texas. Evangelizing, he labored in Kentucky, Missouri, Kansas, Oklahoma, Colorado, New Mexico and Texas.

States in which he held meetings were: Kentucky, Missouri, Kansas, Oklahoma, Colorado, New Mexico, Texas, and in Minco, Indian Territory.

Broadus is also survived by a well-known grandson, Herbert M. Broadus, who lives at Topeka, Kansas, and serves as a minister and elder of the Central Church of Christ in Topeka. Herbert is well known and highly respected for the outstanding work that he has done for 36 years with the Central Church.

Funeral service was conducted for Broadus by Homer E. Moore, Clayton Gall, and A. J. Rhodes at the Walnut and University Church of Christ in Wichita, Kansas. Burial was in Wichita with interment in Old Mission Cemetery

David Thompson Broadus, the founder and first editor of the paper, The Christian Worker, was one of the great gospel preachers in Kansas whose influence continues to live in countless faithful congregations and in the very fine family he left. He was born in Garrard County, Kentucky near the town of Lancaster into a faithful Christian farm family. Lancaster was only thirty or thirty-five miles south of Lexington where many of the important events of the Restoration movement took place. No doubt he heard and was influenced by some of the great preachers of that period. Though we do not have much exact information about his immediate family, we do know that his parents and brothers and sisters were Christians. He attended the public schools until he was eighteen years of age and then "took courses in some of the best schools," followed by a three year course in a correspondence school, graduating with high honors. At the age of eighteen he began teaching school, following that profession for ten years. At the age of twenty-four he was married to Dusky M. Murphy. Four children, none of who survive, were born of that union. They were: Otis, Bernard, Clarence, and Homer T. They were all active Christians, with Otis serving as an elder in the Mathewson Avenue church in Wichita, Kansas, and later in the same capacity with the West Side church (now West Douglas). Homer served the Canadian, Texas church as an elder. One grandson, Herbert M. Broadus, is a gospel preacher working with the Central church in Topeka, Kansas where he has been for nearly twenty-eight years (1979). A great grandson, Edwin Broadus, is also a gospel preacher, now teaching in the Great Lakes Christian College. For more than ten years Edwin served the church in Duluth, Minn. as evangelist, a church he helped to establish. Truly this family has been a powerful influence for good in Kansas, as well as other places.

At the age of twenty-eight Brother Broadus began preaching and his first work was with his home congregation, where he preached for four years. In December, 1884 he moved to Kansas to continue preaching the gospel. In Kansas he established the church in Clearwater, but this effort was lost in the "disgression" over instrumental music and the Missionary Society. He also established the church in Caldwell, and the brethren continue to meet there. He did local work in Conway Springs and Belle Plaine. In the early years of the century he went to Moriarty, New Mexico, a truly mission field, where he worked for about three years. From Moriarty he moved to Canadian, Texas and worked with the small church there for a time. In 1912 he moved to Wichita, Kansas where he spent the rest of his life. In Wichita he was first with the First and Mathewson Avenue church and later worked with a new congregation at Walnut and University Avenue. Their new building was dedicated just two weeks before he died.

Through all these years he conducted many gospel meetings, and this work took him into Kentucky, Missouri, Kansas, Oklahoma, Colorado, New Mexico, and Texas. (His "ledger" shows that he once held a meeting at Minco, Indian Territory.) Herbert, his grandson, has the "ledger" he kept. It shows that he conducted meetings in more than 124 different places. Most meetings in those years were of several weeks duration, and he was often called to return for still another meeting. This ledger shows that he preached at least 7039 sermons and 1218 souls became obedient to their Saviour as a result of these efforts. He preached in a time when preaching the pure New Testament message was not easy. (It never is!) It was a time of turmoil and digression, with much effort required to keep the churches from going into digression on the Instrumental Music and Missionary Society questions. In addition to those problems, he lived in an area where the influence of Daniel Sommer was strong, and this divided many churches and weakened them all. (Brother Sommer gave up his false positions a few years before his death, and thankfully, that influence is dying out.)

Perhaps it was as a writer that he did some of his greatest work. As already stated, he was the first editor and founder of the Christian Worker. He continued in this work to the end of his life, when Homer E. Moore, a faithful gospel preacher and close friend of Brother Broadus, assumed that role and so continued to the end of his life in 1941. Before establishing The Worker, he had edited a paper called: The Christian Companion for a few years. He also wrote for the Gospel Advocate and for most of the papers then published by our brethren. At the time of his death there had been only one issue of The Worker without anything from his pen, and the total contribution he made to The Worker was about 4000 pages of manuscript. He also served for a time as the Associate Editor of the Christian Leader, and did much other writing, including a contribution to "Beauties and Duties of Life," a book published by F. L. Rowe. He, apparently, kept no record of his weddings, but they numbered into the hundreds, and he conducted more funerals than any other gospel preacher in Kansas in his time.

He retained his vigor into old age and did some of his best preaching in the last years of his life, "speaking with his usual rapidity and clearness." But the flesh is subject to decay, and he was finally stricken with a dreadful malady, thought to have been cancer, about seven months before his release. This caused much suffering that continued until the very last hours and ended in his death on Saturday afternoon, September 24, 1924 about 4:30. One who knew him well described him as "...an untiring worker."

The funeral service was conducted Monday afternoon, Sept. 26th, at 3:30 in the West Side chapel by Homer E. Moore, assisted by brethren Gall, Houston, and A.J. Rhodes. Pall bearers were: brethren McCune, Rhodes, Ordway, Houston, Gall, and Carleton, all gospel preachers. The chapel would seat only about four hundred and at least twice that many came. They came from every section of Kansas and from Oklahoma. The body was laid to rest in Wichita, and about a year later his faithful companion followed him into the great beyond. The announcement of his death in this paper concluded with that precious truth from Revelation 14:13 "...Blessed are the dead who die in the Lord from henceforth We can think of no better way to end this story, for we believe this with all our being.

Location Of The Grave Of David T. Broadus

David Thompson Broadus is buried in Old Mission Cemetery In Wichita, Kansas. The cemetery is located at 3434 E. 21st Street, on the corner of Hillside St. N and E. 21st across from Wichita State University in Wichita. Turn north into the main entrance to the Old Mission Mortuary. At the north end of the mortuary take an immediate left turn (west). Proceed through the first intersection, after which the old mausoleum will be on your right. Proceed to the next intersection and bear right (north), keeping the mausoleum on your right. Stop when you are even with the north end of the mausoleum; section "F" of the Old Mission cemetery will be on your left (west). The grave is in the third row west of the road, and is just south of a pair of very large arborvitae ("cedar") bushes. It is in lot 13, space 7. It is engraved "D. T. Broadus."

-Special Note Of Thanks Is Extended To Joe Slater, Preacher For The Church Of Christ In Augusta, Kansas. He Willingly Drove Over To Wichita, Kansas And Found The Grave Of David T. Broadus, Took Pictures, Had Them Developed And Sent Them To Me For Production Of This Site. He Also Has Provided The Good Directions To The Grave Below.