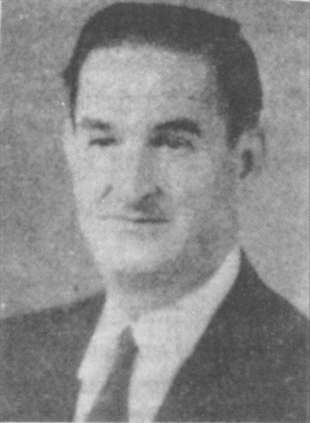 Biographical Sketch On The Life Of Paul E. Moore

One of the founders of the Christian Worker magazine was Homer E. Moore. For so many years he was so connected with it, that many people thought of him when the paper was mentioned. But the "Moore connection" with the Christian Worker did not end with the passing of Homer E. Moore, for at his death his son, Paul, became the owner of it. Paul was born in Wichita, Kansas on December 17, 1905 soon after his parents moved there from Nebraska. Paul grew up in Wichita, attended the public schools there, and with the exception of the four years he spent in Abilene Christian University lived there all of his life. He had two brothers and five sisters. Earl, his oldest brother is still living, and resides in a nursing home in Derby, Kansas. Edna Smith, the only surviving sister lives in Wichita (Jan., 1981). In early life Paul obeyed the gospel in Wichita and remained a devout Christian throughout life.

On June 27, 1947 he was married to Miss Elsie M. Mallett, daughter of Benjamin J. and Minnie L. Mallett, of Arkansas. G. K. Wallace performed the marriage ceremony for them. She too, had been reared in a Christian family, and of course they established a Christian home. Two children were born to them: Joyce P. Moore, and Paula M. Leaman. Paul literally grew up in the Christian Worker print shop where he became a very capable typesetter and printer, and after his marriage his companion joined him in this family enterprise and also became a vital part of the Christian Worker organization. In addition to helping with the actual printing of the paper, she also helped with the operation of the Christian Worker Book Store, as did the two daughters as they grew up.

When he became owner of the paper at the death of his father he continued the same policies his father had followed and worked diligently to make it a good paper as long as he was physically able to do so. He became a very well informed man in both the scriptures and in secular matters. He was personally sound in the faith and was as determined as his father had been before him that The Worker give forth no uncertain sound in Biblical matters. Through his early years he did much of the typesetting and for many years was responsible for the total printing job of the paper. His close connection with the paper made it possible for him to meet and visit with most of the preachers who came to the office. In this way he personally knew most of the preachers in his section of the country, and always prized their friendship. This was especially true of those who served as staff writers and as editors following his father's death. He was especially close to the lamented Rue Porter who became a staff writer in the early twenties and editor-in-chief in 1955 and so-served until his death in 1967.

We do not know when or where he preached his "first sermon," but since he grew up in the Church and was always active in it, it is likely that this happened while he was still quite young and participating in various Bible classes. He preached for many years, but never did what is commonly called "full time local work." He did much "fill-in" preaching and sometimes such appointments would lengthen to a considerable period of service, such as the time he preached for an extended period for the West Douglas congregation in Wichita. During this time, he not only did the pulpit work, but preached for a rather long period on a Wichita radio station. Through the years he served the churches within driving distance by being available for Sunday appointments and for such other service as they needed. He became well informed in the history of the Church in Kansas, as well as the entire brotherhood. His life was devoted to the preaching of the Word, especially through the printed page. Through The Worker many of his articles and editorials went forth to bless mankind.

His years in Abilene Christian University were important years in his life, as such a time is to any serious young person. There he associated with and made life-time friends of many who later became well known in the Church, including such men as Otis Gatewood, Francis Showers, Raymond Kelcey, Reuel Lemmons, M. Norvell Young, Batsell B. Baxter, and many others. While in school there he established and operated the College Print Shop.

His companion who, survived him, said of him: "Paul was a quiet person, but loved people and loved to visit with the preachers who would come to the print shop to visit with him. He had a wonderful memory for places, dates, and happenings as well as the Bible." One who wrote of him soon after his death said: "Brother Paul was known to be a man of constant prayer. . ."

The last four or five years his health failed, including his vision. Some thought that the years of tedious typesetting contributed to his trouble with his eyes, for he became almost blind because of glaucoma. On the 29th of December, 1970 he suffered a massive stroke which left him helpless and unconscious. On the seventh of March in 1971 he was "released" and gathered to his fathers. He was a member of the Cleveland Avenue church in Wichita and the final service was conducted by A. C. Williams and Mark Hicks, Sr. His body sleeps in the Lakeview cemetery in Wichita. This writer knew of Brother Moore, but never met him. Everything I ever heard about him was complimentary, and surely he was a worthy son of a noble father. May God bless his loved ones.

Directions To The Grave Of Paul E. Moore

Paul E. Moore is buried in one of Wichita's most beautiful and well kept cemeteries. Lakeview Cemetery is located at 12100 E. 13th St. N in Wichita, Sedgwick County, Kansas. Phone (316) 684-8200. On the east side of Wichita take Hwy. 96 to the 13th St. Exit. Turn right (east) and the cemetery will be on your left (north). Turn north off of 13th at the main entrance to Lakeview Cemetery." A divider separates in-bound and out-bound lanes of traffic."At the end of the divider is a fountain." Make a right turn (east) at the fountain"and watch for the hanging signs naming the sections of the cemetery." Each sign has a white trash barrel beside it." Go past Terrace Garden, Masonic Garden, and Garden of Love (all on your right)." Then turn left (north) and stop about 20 yards before the sign "Garden of Memory" (on your right)." The grave is in the third row east of the road in the Garden of Memory"section." It is Lot 26, Space 4." (The staff people at the cemetery are friendly and helpful, so do not hesitate to ask for their assistance if you have any questions.) 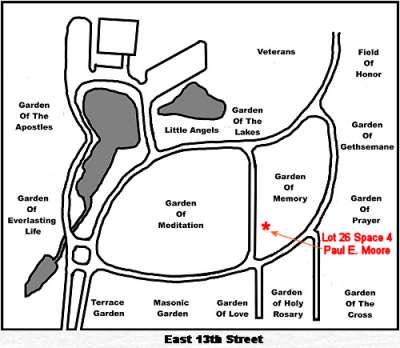 -Special Note Of Thanks Is Extended To Joe Slater, Preacher For The Church Of Christ In Augusta, Kansas. He Willingly Drove Over To Wichita, Kansas And Found The Grave Of Paul E. Moore, Took Pictures, Had Them Developed And Sent Them To Me For Production Of This Site. He Also Has Provided The Good Directions To The Grave Below. 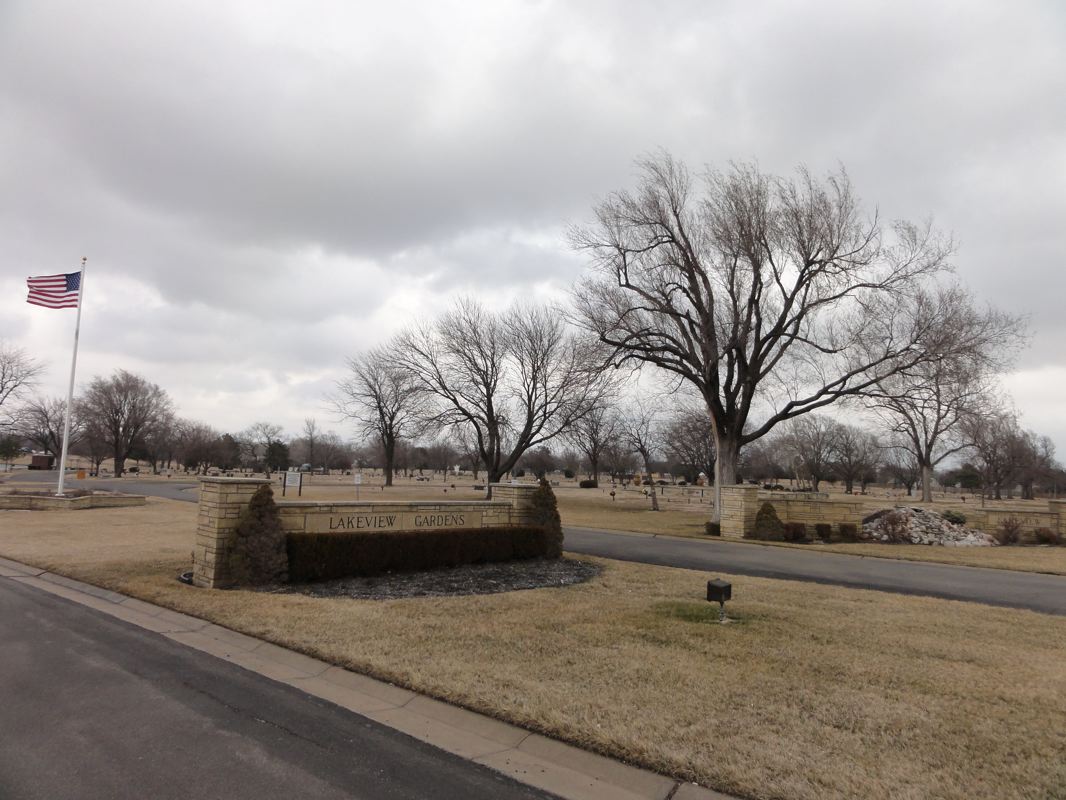 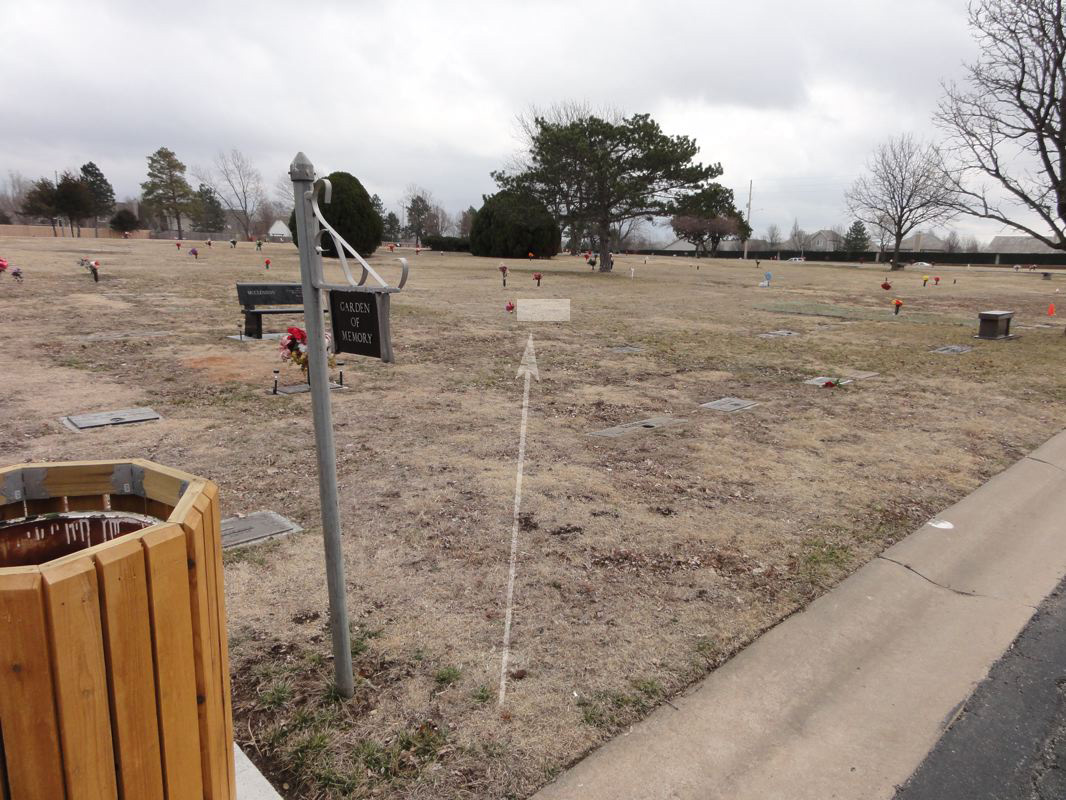 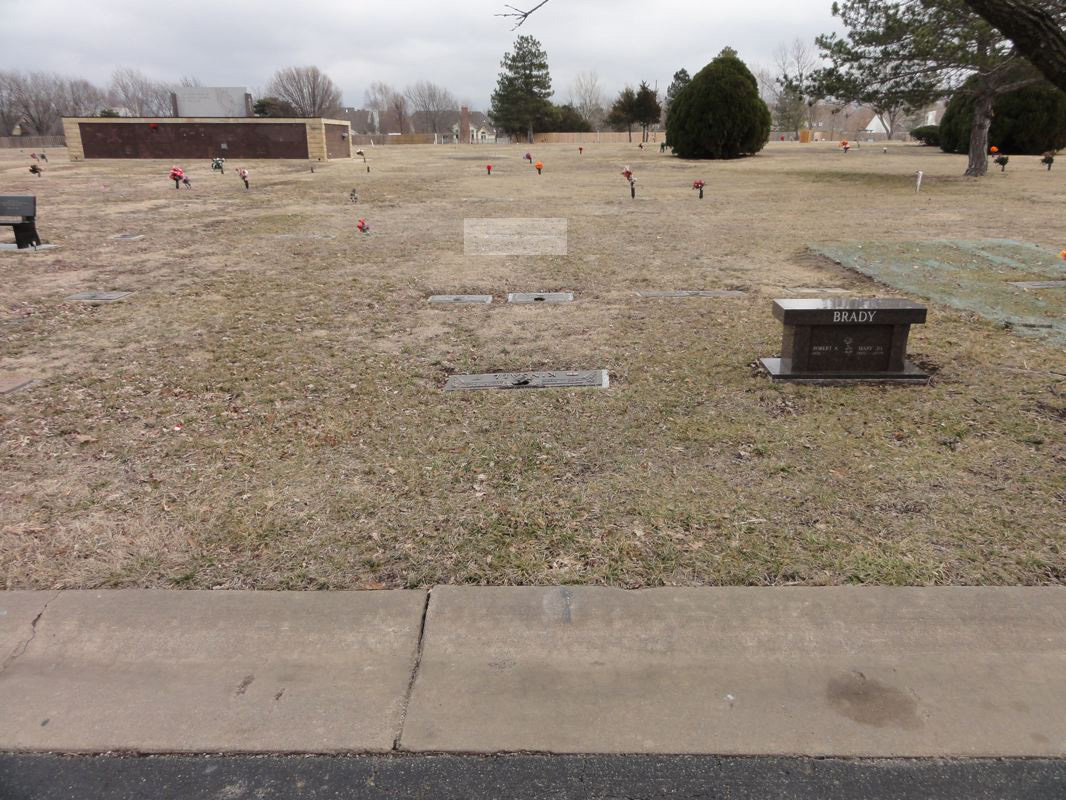 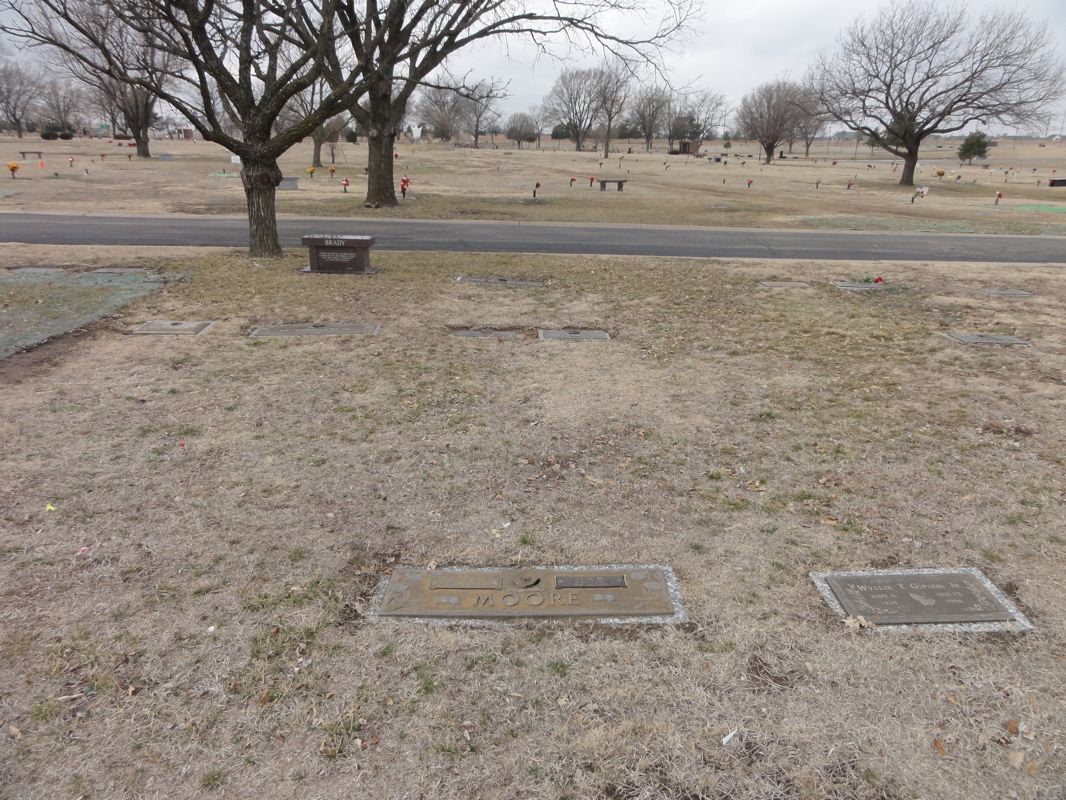 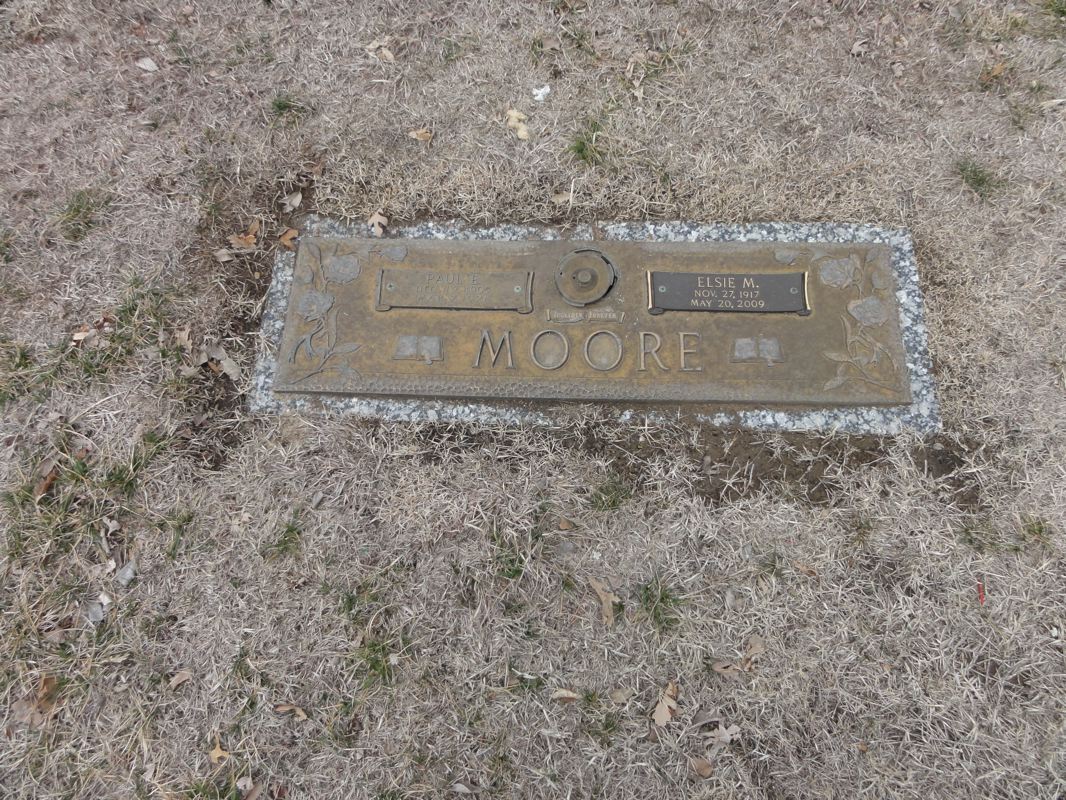 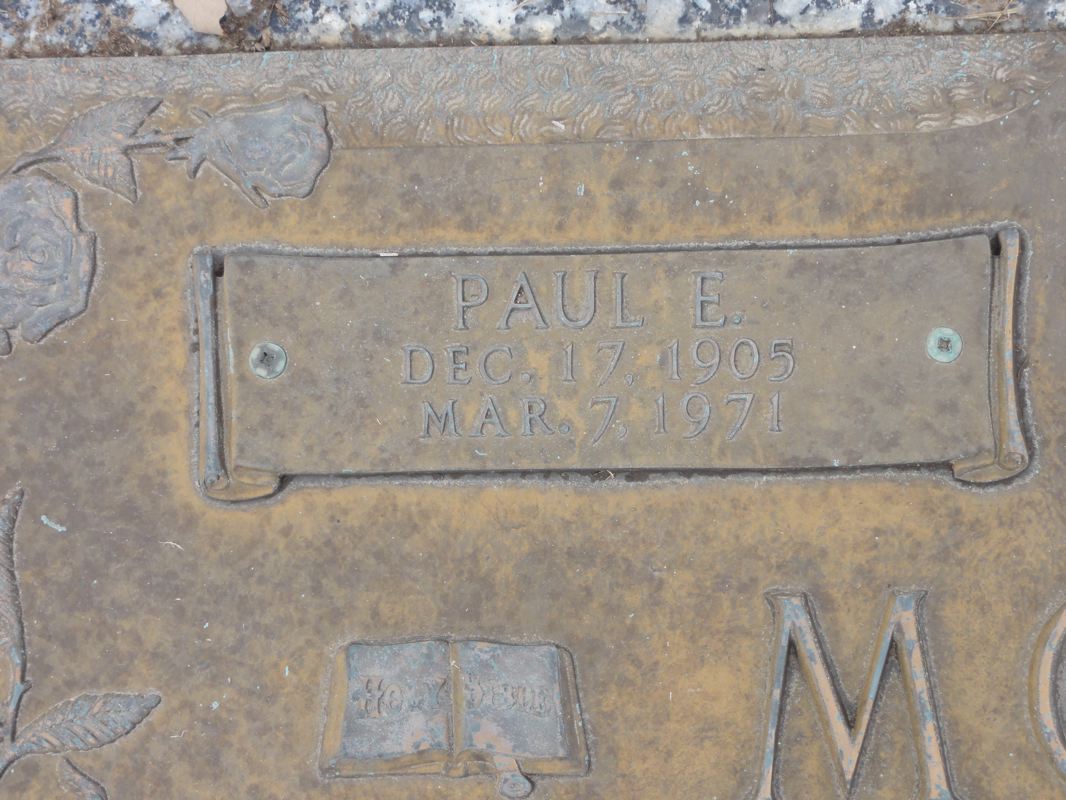