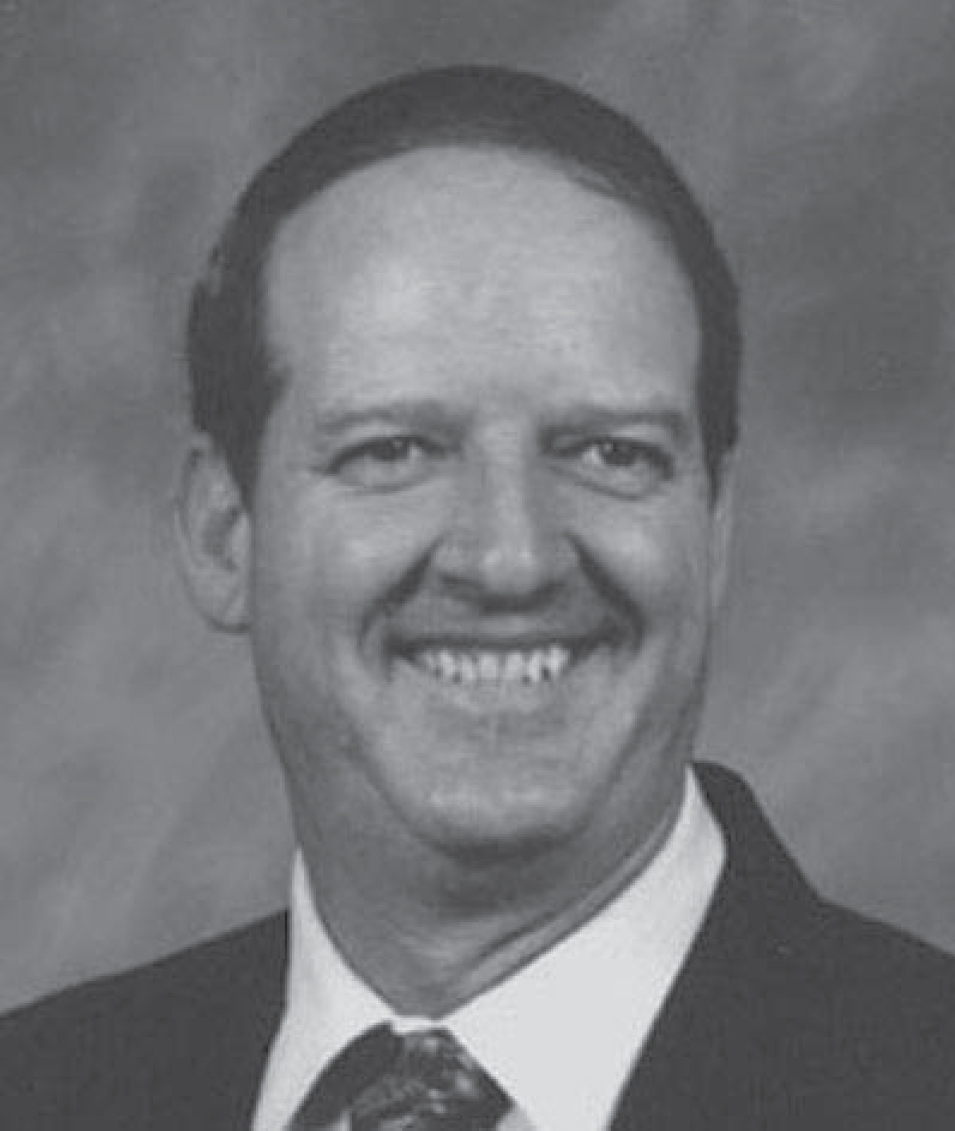 Wilburn R. Ashby died Friday, February 6, 2004. He was 57 years old. He was a minister for 31 years most recently serving at Cedar Springs church of Christ. He was an Air Force veteran of the Vietnam War. He was preceded in death by a sister, Claudette Raby. He is survived by his wife, the former Janie “Lucille” Miller; sons and daughters-in-law, Matthew Makenzie, Luke and Laura, Aaron and Christian and Caleb Ashby; father, John Ashby; mother Dezarie Ashby; and a brother, Gaylord Ashby. His funeral was held on Monday, February 9 at Cedar Springs church of Christ.

On January 24, 2004 hundreds of people, many present in body, but some just in spirit, celebrated the life’s work of Wilburn R. Ashby, my Dad. It was an awe-inspiring site to see over 200 people present, accompanied by several hundred cards and letters, wishing to let Dad know that he had made a difference in this world. What an honor it was for him to be presented with letters of congratulations and certificates from brotherhood schools. How proud I was when brother George Puckett presented Dad with a plaque recognizing his many years of preaching and brother Manson Waldridge presented him with certificates from Heritage Christian University, Faulkner University and others. One man CAN make a difference, and Dad’s thirty plus years of service to the Lord was seen the Saturday, as one after another told of their love for my father and their connections with him. Touching so many lives in his work in Tylertown, MS; Ruleville, MS and Ripley, MS, and ministering to the Cedar Springs church of Christ in Louisville, KY for twelve years, Dad truly dedicated his life to God’s work, and his presence was seen by so many. People from as far as Louisiana were present in Louisville that day. Some were there because he officiated at their weddings, some because he officiated at their weddings, some because he baptized them, some because he simply made a difference in their lives that they would remember forever. But every person there had been touched by my Dad.

I have been around preachers all my life. I have seen how much they do. I know many wonder at the end, “Have I really made a difference? If I had never lived, would the world be different? Would it be better or worse? Did I really work for the Lord, or just deceive myself into thinking I was accomplish something?” Bud Dad had no doubts that day. As some testified to their faithfulness because of his work, and others to the help in family life and devotion of time to God, and as my brothers and I told of cherished moments and dedications to Christ’s work, Dad recognized his mark on many persons. This event should remind us all that one person even a poor boy from Alabama CAN make a difference.

As many people in our brotherhood know, Dad began battling cancer just a few months following my wedding (which he performed 1999. We had a number of talks about his ailment. If anyone could have had an excuse to whine and moan and ask, “Why me?” It was my father, but he never did. While others asked, “Why Wilburn?” Dad simply replied, “Because.” It is not in us to understand all things. Not long before his death he said, “Some have asked me if I feel I deserve this. I told them no, but I don’t want what I deserve. I deserved to die the first time I sinned and be sent to eternal punishment.” I agree, I do NOT want what I deserve, and every minute, hour, and day of my life since the first trespass is a blessing that I am not worthy to receive. When we realize, as Christians, that even at our best we are still “unprofitable servants,” our outlook on things should be spent in service to our Lord.

On the beautiful wall plaque presented to Dad on January 24, there is an excerpt of Scripture from Romans 10:15 that says, “How beautiful are the feet of them that bring glad tidings of good things!” As beautiful as those words are to me, when pondering and remembering my Dad’s life, I think of another that uplifts: “Wherefore, my beloved brethren, be steadfast, unmoveable, always abounding in the work of the Lord, forasmuch as ye know that your labor is not vain in the Lord.” (1 Corinthians 15:58.)

My Dad’s suffering ended on February 6, 2004 and he became one of those blessed who “Die in the Lord.” (Revelation 14:13.) His work was finished. He held my hand and gave up his spirit. What a life he led. What a servant he was. What a future ahead!

South of Louisville, Kentucky, take I-65 to the town of Brooks. Take exit to John Harper Hwy./ Hwy. 1526 to the east. Before you get to N. Preston Hwy. you will see the Brookeland Cemetery and Schoppenhorst Underwood & Brooks Funeral Home on the right. The map below pinpoints the location of the Ashby Family plot below. 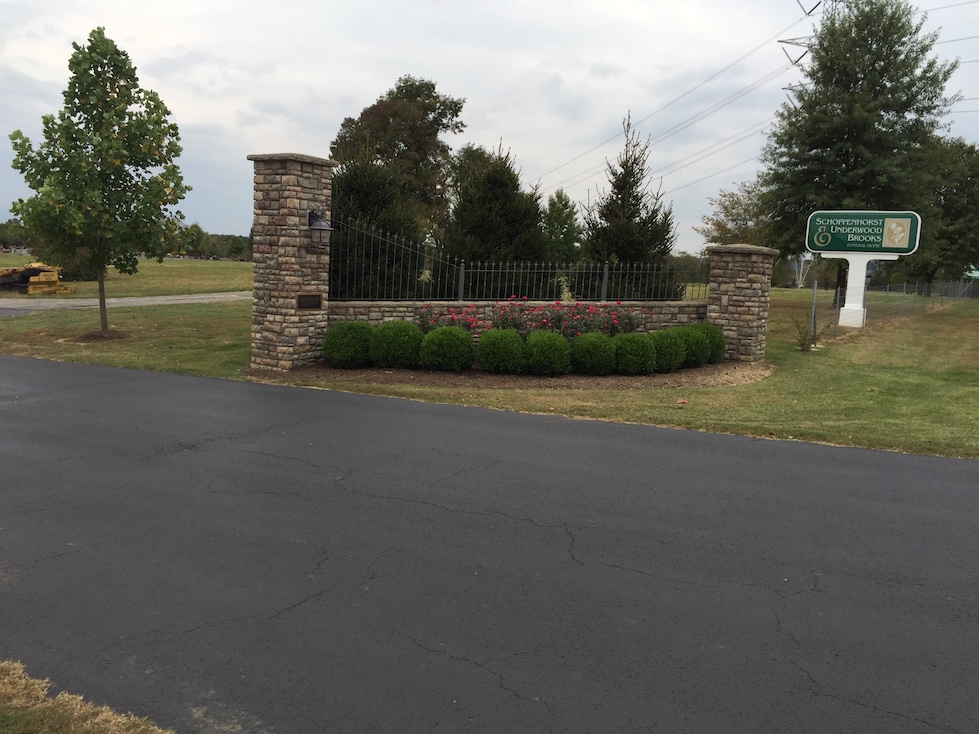 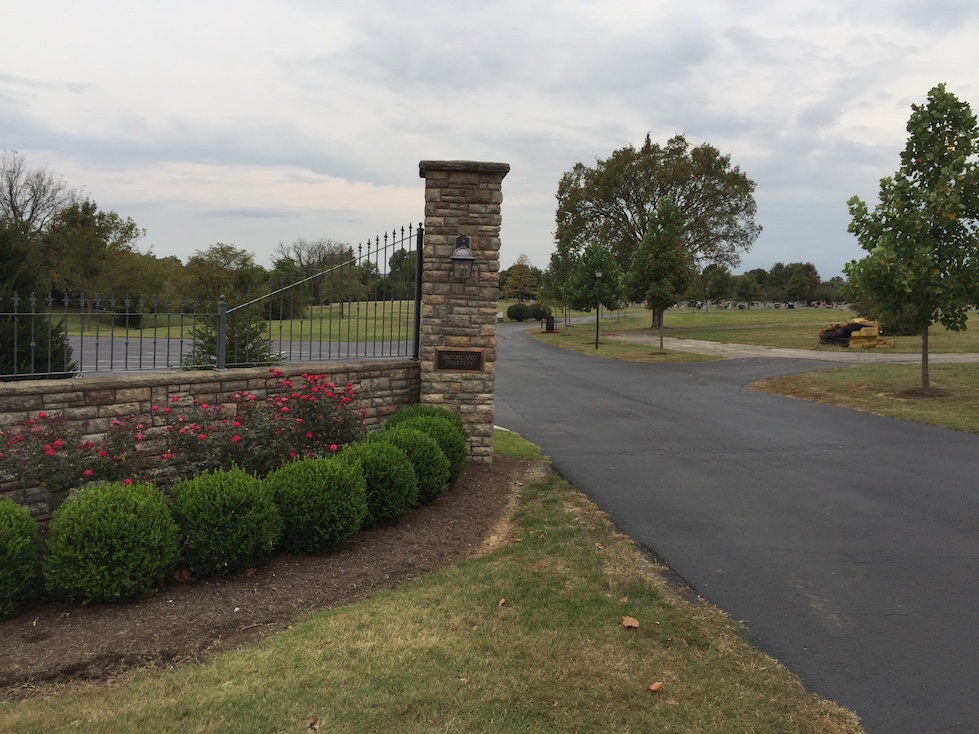 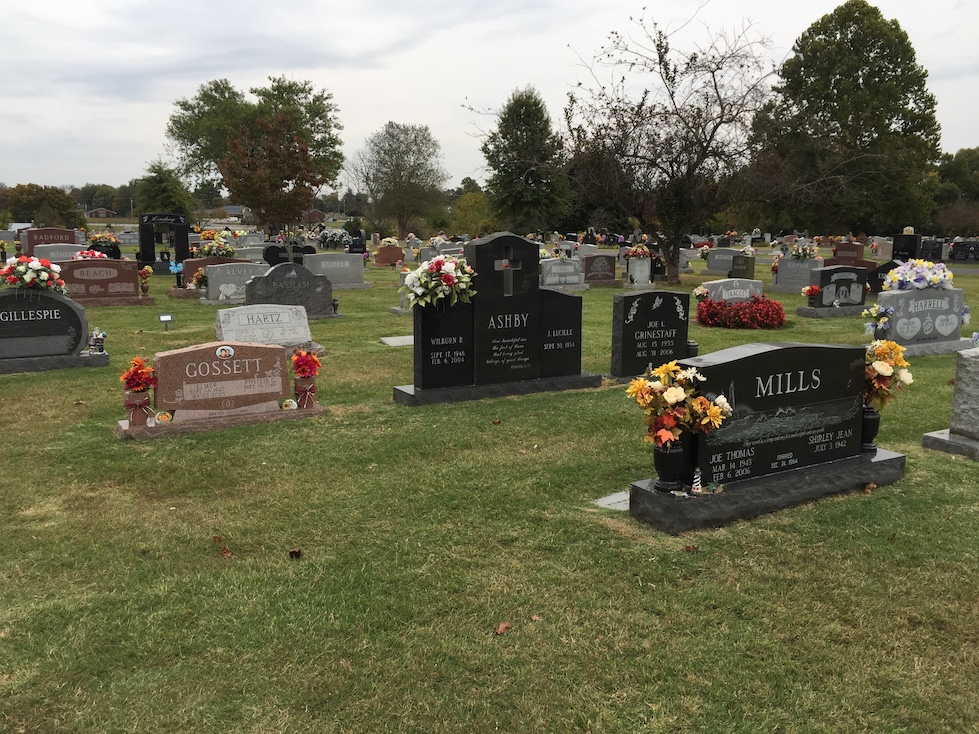 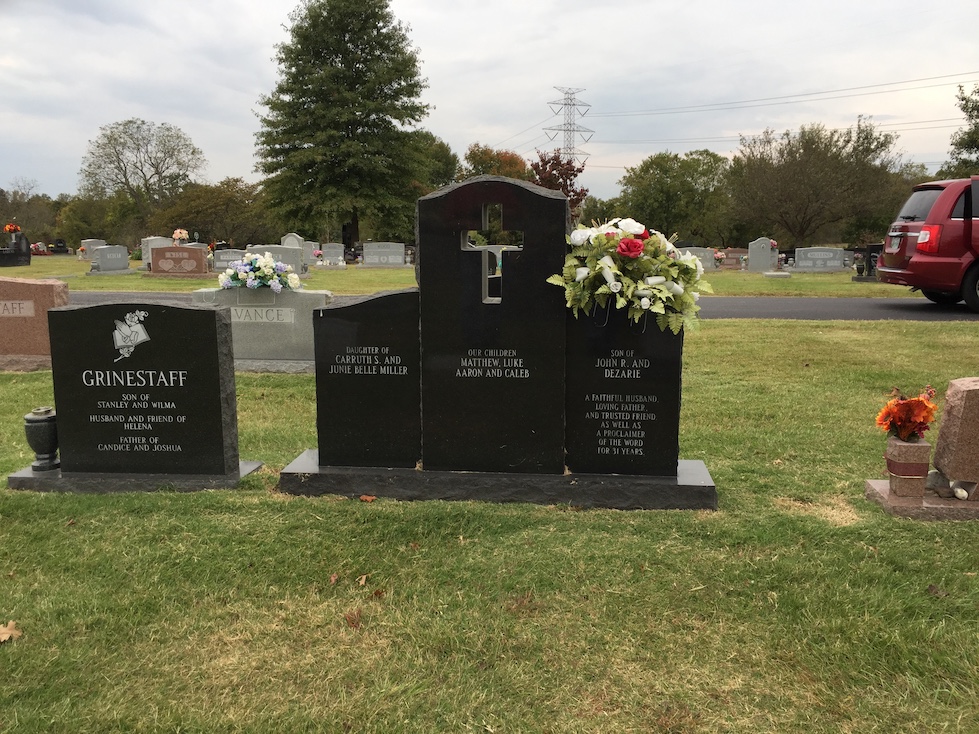 Daugther of Carruth S. And Junie Belle Miller
Our Children - Matthew, Luke, Aaron and Caleb
Son of John P. And Dezarie
A faithful husband, loving father, and trusted friend, as well as
a proclaimer of the word for 31 years. 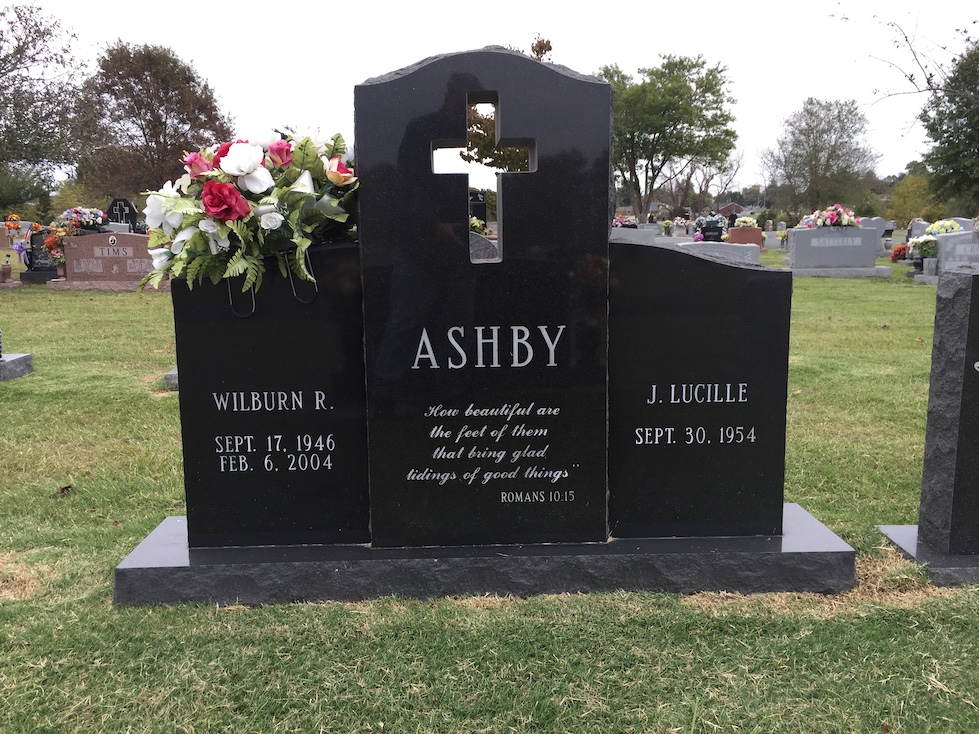 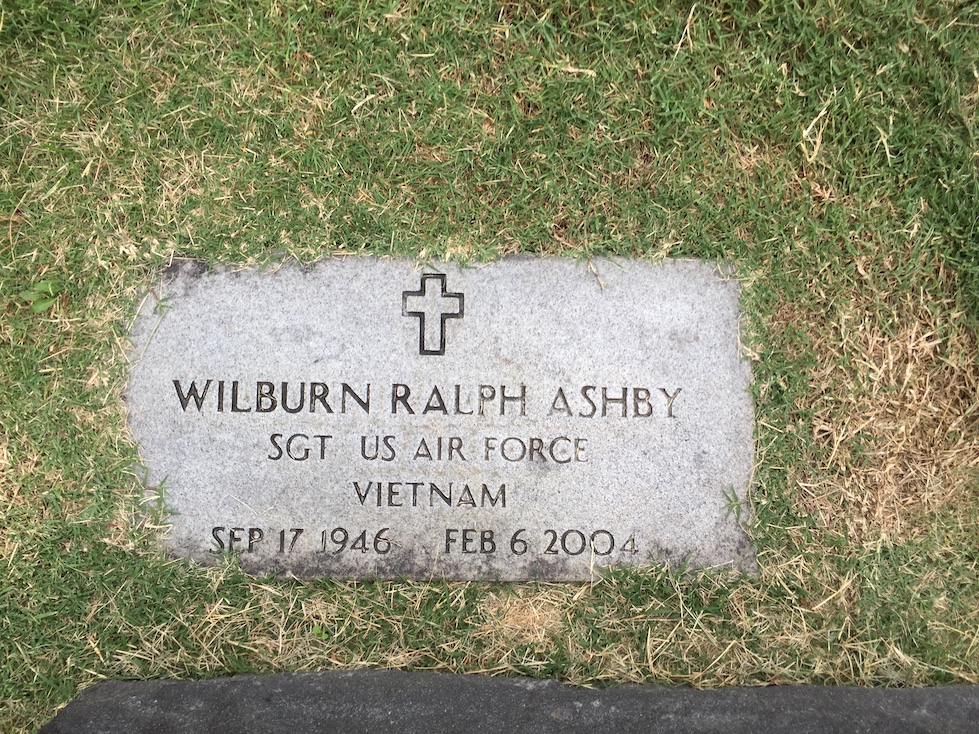