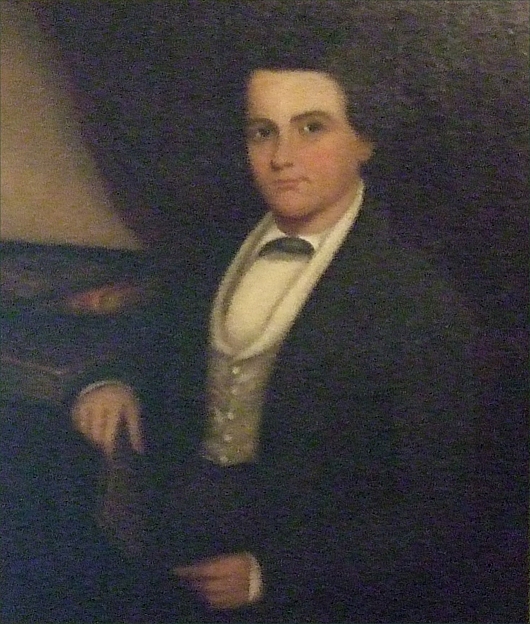 Early Portrait Of John B. Bowman

This (speaking of Robert Milligan - 1865) was the man who had just assumed the presidency of The College of the Bible. As he stood facing Morrison College and the duties awaiting him inside, he was aware of the ambitious plans of Regent John B. Bowman to open three additional Colleges in the University: a Normal College, a College of Medicine, and, to fulfill his agreements with the Legislature, an Agricultural and Mechanical College. The Normal College never materialized under Bowman's administration. But the College of Medicine, reviving Transylvania's distinguished medical history, was finally opened in 1873. There was also the Commercial College which came into being in 1867.

Across town, scarcely two miles distant, stood Ashland, the former home of Henry Clay with its estate of 330 acres; adjoining it stood another 113 acres known as the Woodlands. Regent Bowman was planning to buy these two estates as the future campus and experimental farm for the Agricultural and Mechanical College. The Kentucky Legislature had appropriated $20,000 toward the expenses of the new college.' The sale of the land scrip for the 330,000 acres granted by the Morrill Act was being negotiated. In the glutted land market of the period it brought less than fifty cents per acre, only $164,960 altogether.' This became the permanent endowment of the Agricultural and Mechanical College, and yielded an annual income of $9,900, which the Legislature "appropriated" to the University for its use in the conducting of the College. For the rest, Bowman had bound himself to raise the $150,000 needed to purchase Ashland and the Woodlands and to erect the necessary buildings to get the new college in operation. Thus for a cash outlay of only $20,000 and a grant of land which had come from the federal government, the state had an Agricultural and Mechanical College, subject to the control of a Board of Visitors appointed by the governor and ratified by the Senate. The tragedies of state church tensions so bitterly experienced in Transylvania's past (see Appendix III) were about to repeat themselves in Kentucky University.

As Robert Milligan entered Morrison College on that first day of the new term in 1865, Ashland and Woodlands were two miles away and the opening of the Agricultural and Mechanical College was one year in the future, but he was destined to have dealings with them painful and explosive dealings which would rock the Commonwealth of Kentucky and the life of the whole brotherhood.

Lexington that autumn day, with its ten thousand citizens and its dual campuses on opposite sides of town, seemed peaceful and serene. Like the whole land, the city was bandaging the wounds of the war, but these were healing because they were the clean wounds of exhausted violence, not yet festering from the greed and vengeance of the carpetbaggers. The frontier spirit stirred again. Lexington was turning its back upon the war a upon a nightmare. There was an aching determination to put it all behind; to stretch out in hope toward a new day. And nothing stood out more clearly as the symbol of that hope than the rising new University.

John Bryan Bowman was born October 16, 1824, of one of the pioneer families who had founded Harrodstown (later renamed Harrodsburg), the first white settlement in Kentucky. One of his granduncles, also named John, had studied law under Henry Clay and was one of the founders of Bacon College. He himself had attended Bacon College, graduating in the class of 1842. Since the age of fifteen he had been a member of the Harrodsburg Christian Church. After graduation he settled down to the life of a country gentleman on his inherited estate, "Old Forest Farm," between Harrodsburg and Burgin. With a modest fortune of his own and with slaves to work his farm, he had no need to stir; but sometime in this period he studied law and was admitted to the bar, though he never entered into practice.

Thus matters stood until young Bowman rose to meet the challenge of Bacon College! Though a slave holder, he remained loyal to the Union throughout the war, and afterwards became a Republican.

After coming to Lexington, Bowman and his wife, the former Mary Dorcas Williams of Paris, Kentucky, were active in community affairs. They made their home at Ashland, the former mansion of Henry Clay; grateful curators granted them this residence rent free, and the Bowmans brought the famous house added distinction through their celebrated hospitality. In a short time Bowman became one of the founders of the Lexington Street Railway, a trustee and founder of Hocker Female College, and otherwise showed himself to be an enterprising and public spirited citizen. His work for the University was a labor of love. Though the curators repeatedly urged it upon him, he steadily refused a salary.'

The new University which Bowman contemplated with such loving eye in these days immediately following the Civil War was regal as regal as a perfectly symmetrical volcano presiding over a tropical landscape, its whisp of smoke mingling with the troops of clouds that march across its highest slopes. The whisp of smoke, like its mother the volcano, is a thing of beauty. But it one should take warning that there is a fire deep in the earth; and that, deep down below the surface beauty, subterranean forces build up slowly one year, three years, five years ten toward the inevitable explosion. 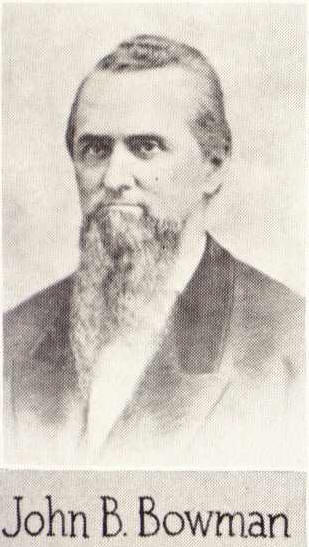 In the face of his difficulties, Regent Bowman was growing more and more arbitrary. He found himself at war with his ex¬ecutive committee who felt called upon to censure him, to order him to turn over his books for audit, and finally to demand in a Christmas meeting of 1876, the abolition of the regency." The matter was postponed until spring. Meantime, the executive com¬mittee found Bowman so uncooperative with the audit ordered by the board that on April 9, 1877, they suspended him until the June meeting of the full board." In June, Bowman came before the board to make his defense in "a bold, violent, and aggressive document." The board reversed the action of the executive committee, thus continuing the regency for another year; but they did take the treasury from him and place it in the hands of D. S. Goodies. Bowman was reluctant to turn over the accounts to Goodloe; in the next session the board ordered him to do so."

Late in June, 1877, the curators' executive committee informed the Kentucky Christian Education Society that, since endowment funds for the Bible College had failed to materialize, and since University finances were necessitating a general retrenchment, they would have to dismiss President Graham and retain Professor McGarvey half time at a salary of $750.00. The Education Society decided that the resultant "mutilation" of the Bible College amounted to an abolition of it. It determined to pull out of the University and start its own College of the Bible in the basement of the Main Street Christian Church. The story of those new beginnings are reserved for the next chapter.

The last stormy year of Bowman's regency was beset by a series of humiliations. On January 28, 1878, an investigating committee of the Commonwealth Legislature composed of five senators and seven representatives sat in the Phoenix Hotel in Lexington taking testimony and examining witnesses. As the hearing proceeded, with the help of the carefully documented financial reports made by the Arts College President, H. H. White, after his mathematically precise examination of the books, it became clear that the recommendation of the committee would be for severance.

Bowman made one last bold attempt to salvage his dream. He entertained the legislators at Ashland for dinner, and in the warm atmosphere of crystal and candlelight made his proposal: Change the name of the institution to University of Kentucky; repeal the charter and issue a new one forbidding the majority of curators to be members of any one church; set up an endowment of $75,000 for The College of the Bible and place it under its own trustees and its own management; grant at the same time a similar right to its own Bible College to any denomination wanting it.

To this proposal the committee turned a deaf ear. Its report to the Kentucky Assembly resulted in the act of March 13, 1878, to sever the Agricultural and Mechanical College of Kentucky from Kentucky University and set it up under exclusive Commonwealth control.

The Board of Curators abolished the regency the following June and ordered Bowman to vacate the Ashland mansion. When he died thirteen years later in 1891, his vision in the exact shape in which he had dreamed it had been shattered, but in its place stood a realization far more resplendent: not one institution but three a thriving church related college (now Transylvania), a growing state university, and a promising theological seminary. Forces which at the time had appeared so destructive had been truly creative.

Lexington paid belated tribute to John B. Bowman on November 12, 1914, when it unveiled a tall monument erected by bequest from Alexander R. Milligan, long time professor of Kentucky University, and son of Robert. Six hundred citizens gathered in the Lexington Cemetery for the unveiling. At 11: 3 8 A.M. the electric power in the city was shut off and all Lexington paused for two minutes to pay silent tribute to the man who had wrought far better than he knew.” 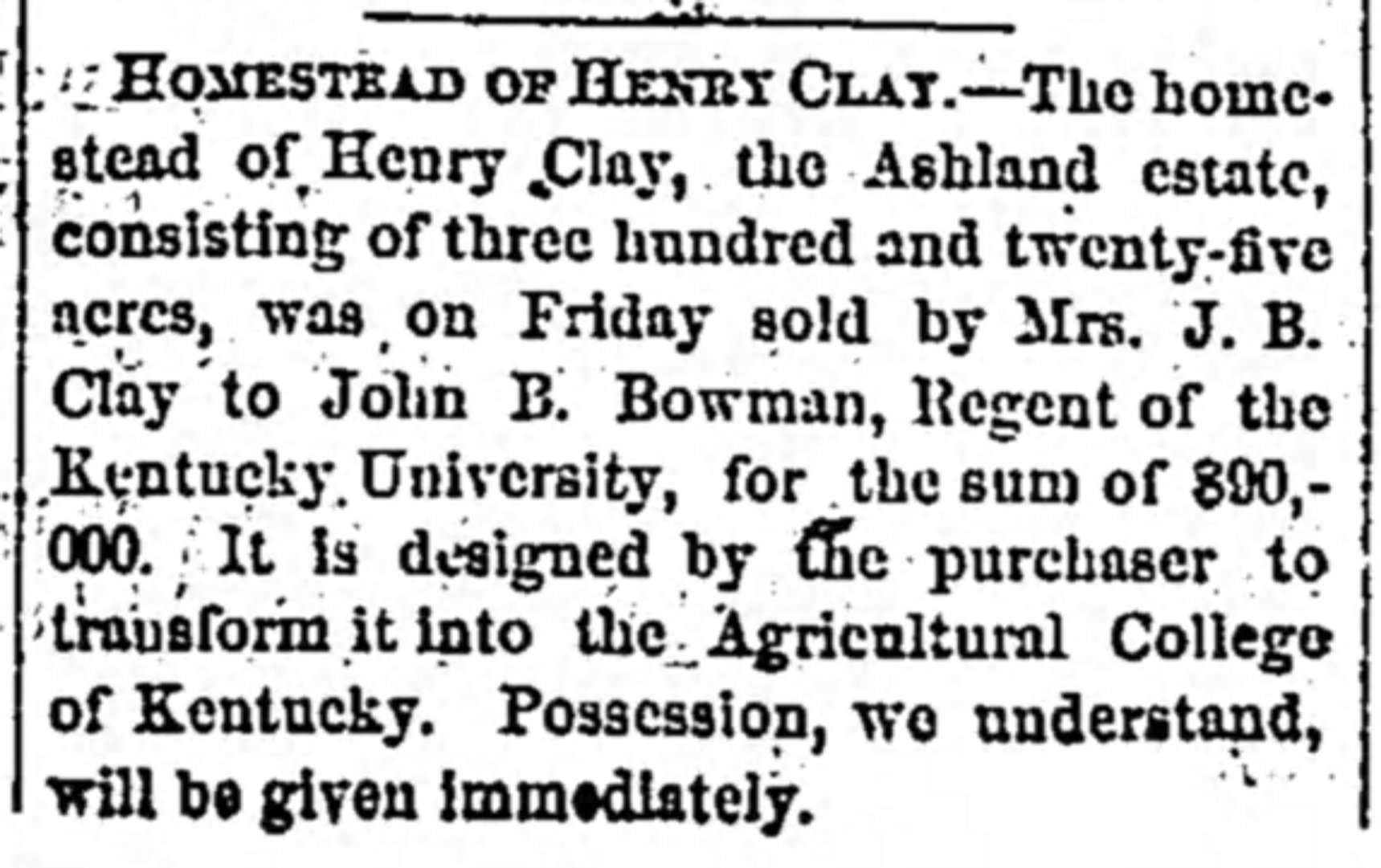 Those To Control The University of Kentucky 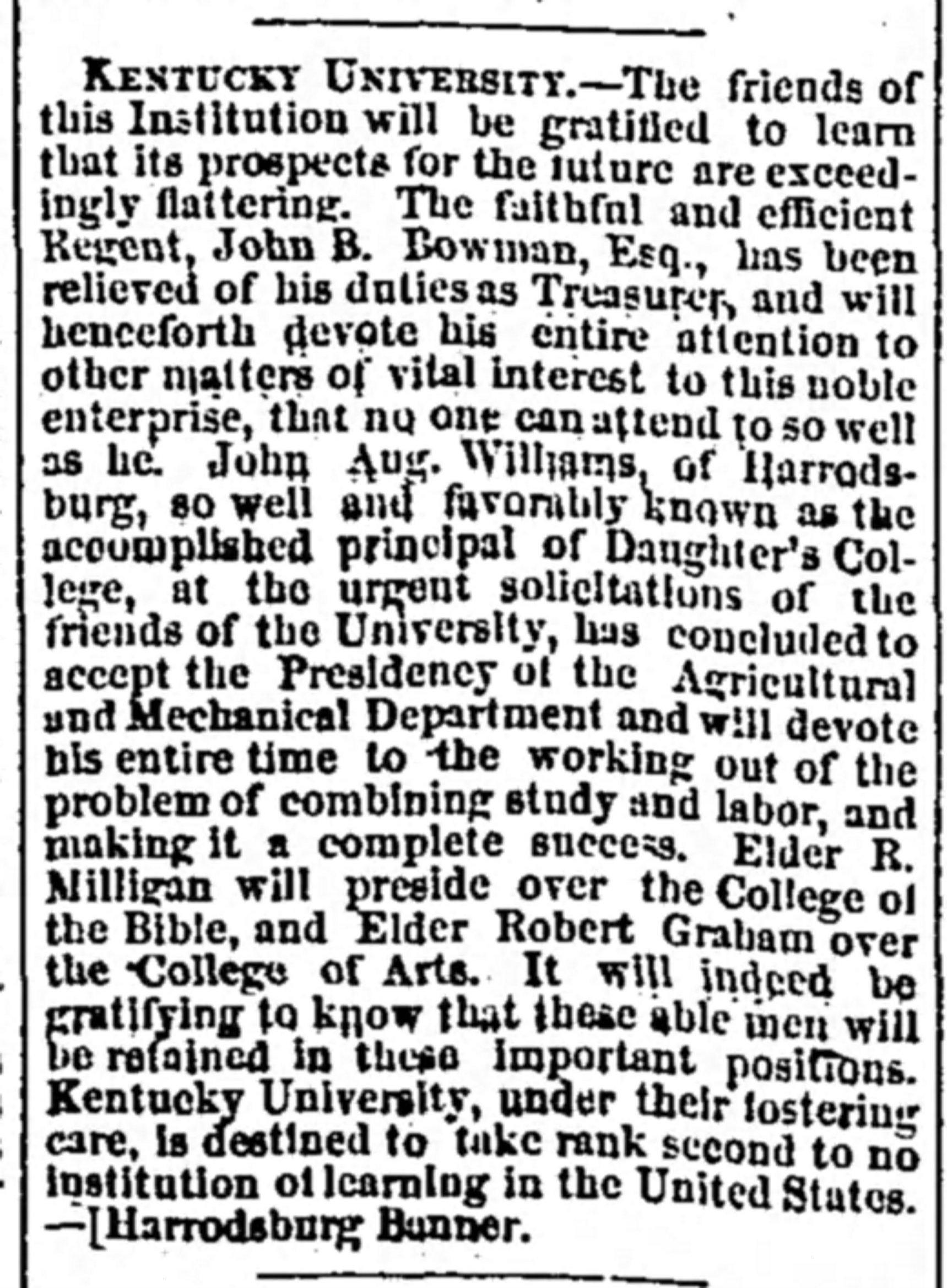 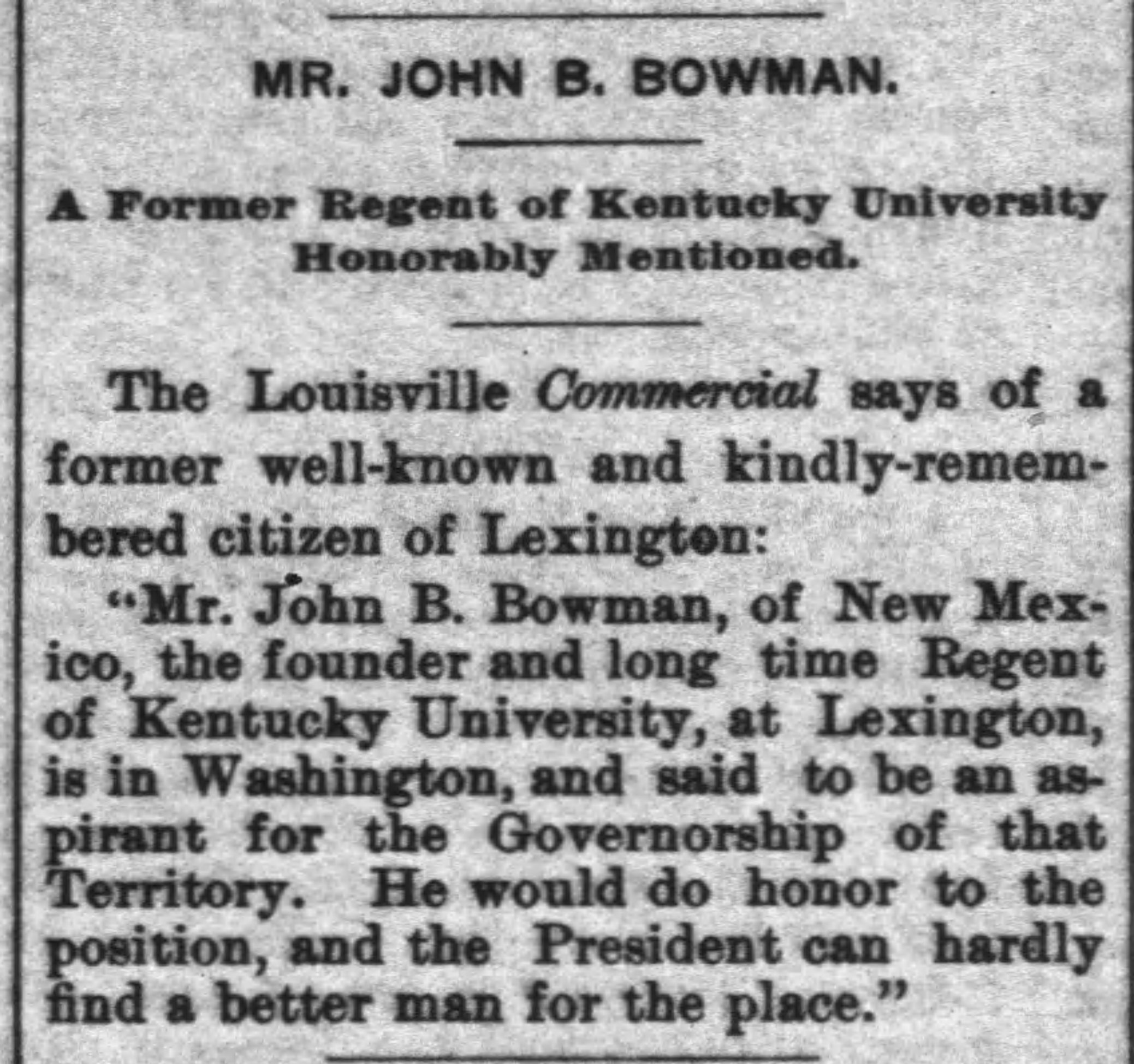 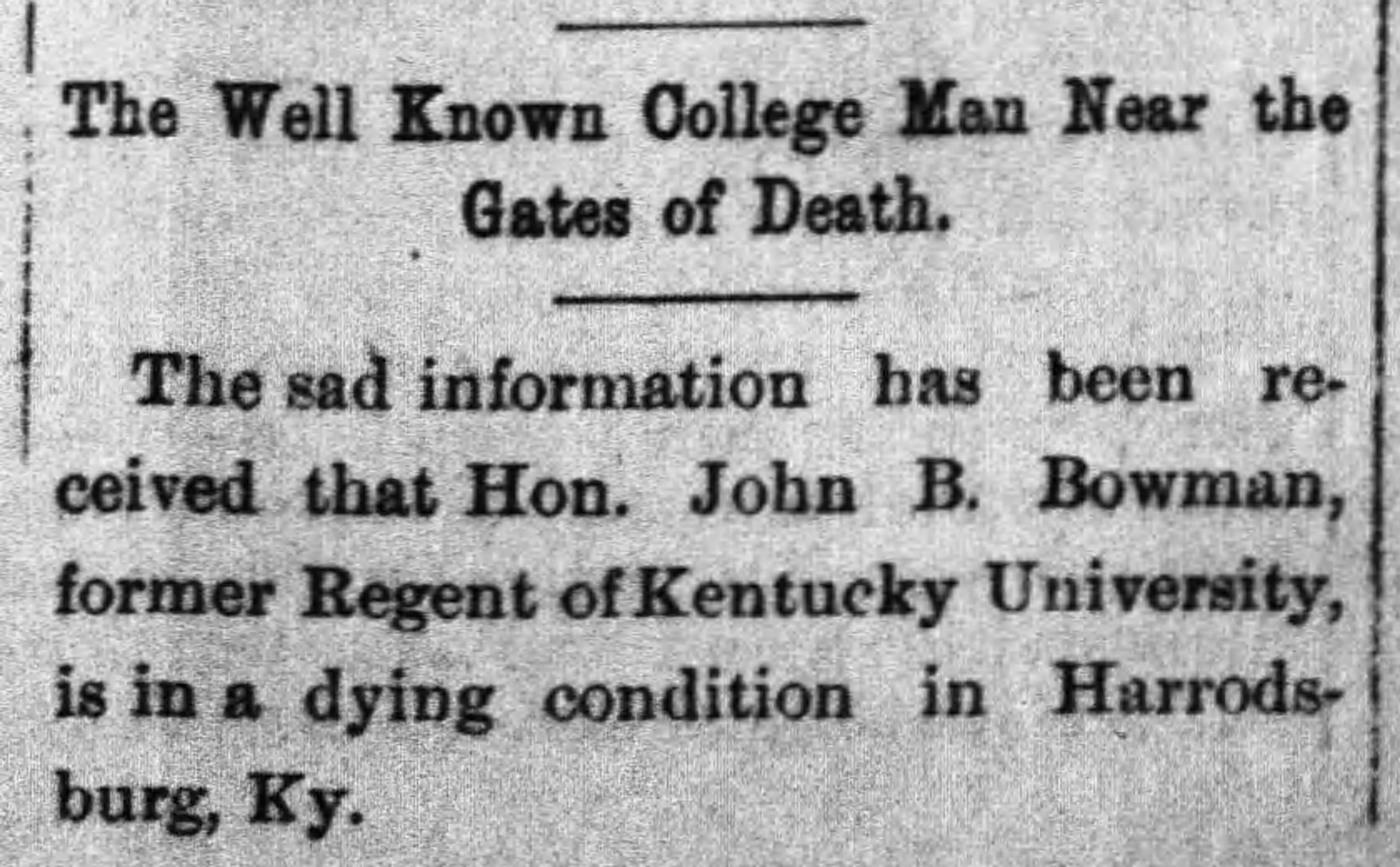 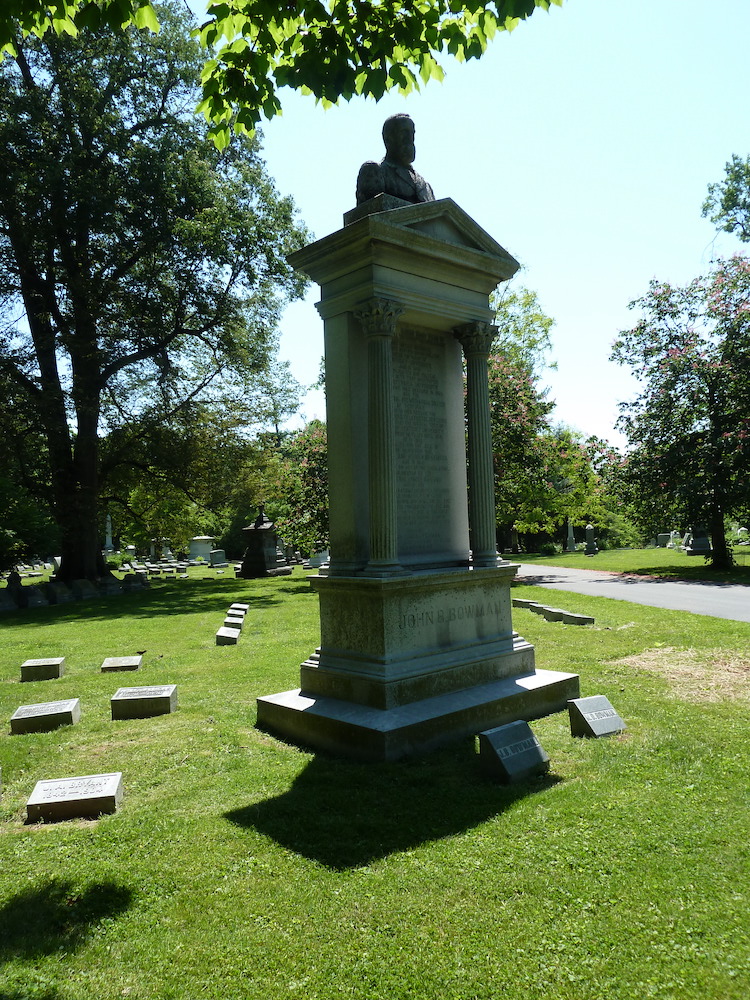 The stone for John Bowman was unveiled Nov. 12, 1914, erected by Alexander R. Milligan, 600 citizens came for the unveiling. At 11:38 am the electric power of all of Lexington was turned off for 2 minutes to pay tribute to Bowman. p. 59, Lexington Theological Seminary: 1865-1965

Lexington Cemetery is one of the most beautiful old cemeteries in America. It is located on West Main Street heading away from downtown Lexington toward Leestown Pike. Turn right into the main entrance past the office. Stay on Main Avenue passing Henry Clay Monument on the left. Go to the end of section "K" and turn right. You will go into a circle. By staying to the right in the circle you should see the monument in the corner of Section "9." The GPS location of the grave of John Bowman is: 38°03'30.8"N 84°30'25.9"W / or D.d. 38.058550, -84.507200