Isaac Denton was a pioneer Baptist preacher in southern Kentucky. He started schools and planted the Baptist religion in southern Kentucky and northern Tennessee. Though never a part of the Restoration Movement in America, he interacted with many of those who left Calvinist theology to return to the ancient order of things. Perhaps the most known connection was through his relationship with "Raccoon" John Smith. There are excerpts below showing his work, and his interaction with Smith.

"Raccoon" John Smith was a great leader among the Reformed Baptists movement in Kentucky. He and his reformers merged with Barton W. Stone's Christian movement in 1832. Then they began referring to themselves simply, the Church of Christ. In his youth, Smith was greatly influenced by Isaace Denton when living in and around Monticello, Kentucky in the early 1800s. He was immersed by Denton December 27, 1804. His biographer recalls Denton as follows:

"In 1799, Isaac Denton, an humble and godly man, came out to live among them as a minister. Settling on a small farm in the neighborhood ofSmith,he organized a church, of which he took the charge. His brethren soon built a meeting-house near where he lived, on the banks of Clear Fork, a small tributary of Wolf River. The spiritual interests of the Clear Fork Baptists could not have been intrusted to more faithful hands. He was kind in disposition, sound in the faith, and zealous in the work of his office. Under his ministrations the church prospered; it grew in piety and in numbers; the elect were industriously gathered in, and faithfully instructed in the nature of their high vocation. (page 35).

"About that time, too, he was much in the company of Isaac Denton. This good man, who, like other pastors of the day, faithfully tended his flock without tithing them, was sometimes in need of help to raise corn for his family.John,who lived close by, and was always ready to assist a neighbor, went over at seed-time and at harvest to work in his field. Denton was a kind and companionable man, always as willing to teach his young friends as they were to learn. He had a special regard, too, forJohn,whose probity and good sense promised much for the Church, should the Lord ever give him a new heart. As they toiled side by side along the young corn-rows, or through the ripe grain, they talked much together of the mystery of redemption.


"The faithful minister labored to impress on the mind of his young friend the thought that the sinner is utterly dead, so that he could not obey God if he would; and utterly depraved, too, so that he would not obey if he could. He reminded him that he could not please God without faith, nor have faith till it pleased God to give it; that though he might acknowledge, he could never truly feel his desperate wickedness till the Holy Spirit should show him how vile and wretched a thing he was.


"You can not, my young friend," he would say, in effect, "you can not have proper views of God and his law, of Christ and his teachings, nor can you ever truly repent of your sins, or believe in a Savior, till your whole moral nature has been changed by the power of the Holy Ghost."


"And what must I do," his thoughtful disciple would inquire, "in order to have this change of which you speak wrought with'i: me?"


"Nothing,John; God's grace is sovereign and unconditional. If you are of his sheep, you will be called, and you will hear his voice and follow him."


"In his own good time, John, He has marked out your wholelife,and determined your destiny according to his own wise but hidden and eternal purpose."


"You will know it by your change when it comes; till then you can only wait on the Lord and hope."


"The Lord sees no goodness in you,John.If you are ever brought tolife,it will be solely because it was his good pleasure to choose you for himself before the foundation of the world, and that, too, without any reference to your character or works foreseen by him. True, if you should be lost, if you must perish,John,it will be on account of your sins, and to the praise of his glorious justice."


"My destiny, you say, Mr. Denton, is fixed, and I can not change it. I need not, then, give myself any concern—I have nothing to do."


"Ah! great is the mystery of godliness,John; there is something for you to do."


"You must pray,John; pray in the dust and ashes to the Lord."


"That the blinding scales may fall trom your eyes, and that you may see and feel what you really are in the sight of God; for you are yet in the gall of bitterness and the bonds of iniquity." (page 48,49).

Events Leading Up to Smith's Baptism into the Baptist Church,

So great, finally, was the estimation in which his religious friends held his long and painful experience—so evident was it to them that a work of grace had been wrought in his heart, that they did not hesitate to acknowledge him as a brother, and to urge him to come forward and relate the facts to the congregation. On Saturday, the twenty-sixth of December, 1804, he went before the Church and gave a plain statement of his religious struggles during the past ten months. The Moderator formally submitted his case to the brethren. "All who believe," said he," that the experience just related is a work of grace, hold up their right hand,"—and every hand in the congregation was raised in testimony of his conversion to God. The next day, he was immersed by Isaac Denton in the waters of Clear Fork; and, as soon as the congregation were seated in the house, theEldercalled him forward to the altar, and, praying that he might become a pillar in the temple of the Lord, solemnly laid his hands on his head, and thus received him into the fellowship of the Church.

Smith had departed the Baptist Church, and went home again, finding somewhat of a cold reception from his friends and family. An interview with Isaac Denton:

While indulging in these reflections, he suddenly met his old pastor, Isaac Denton, in the road. He was then on his way into Wayne County, where he had an appointment to preach. After much cordial greeting, they dismounted, and, hitching their horses on the roadside, sat down together on a log, and entered into conversation.

"I suppose, Brother Denton," saidSmith," that you have heard many unfavorable things about me—concerning my departures from the faith, and the errors into which I have run."

"Brother Denton, you always professed to believe that I was candid and truthful, even when a boy."

"I have always believed that,John."

"I hope, then," said Smith,"that you will think I am candid now, and that I will tell you the whole truth about my departure from the faith."

"Yes," replied Denton; "Satan has never tempted me to doubt that you were a Christian from the day that I baptized you to the present moment. But you are gone—you are gone,John!"

"Where to, Brother Denton ?" quickly askedSmith.

"From the faith of the Baptists," as quickly rejoined Denton.

"Well," saidSmith," I will tell you truthfully the whole route I have traveled: I have gone from the Philadelphia Confession of Faith to the Bible as my only guide in matters of religion."

"I have set down Alexander Campbell, John, as the most erroneous and corrupt man in the world," said Denton. Smith,by no means diverted from his purpose by this denunciation, remarked: "I have heard, Brother Denton, that the doors of old Clear Fork meeting-house, where Itold my experience many years ago, and where you received me into the church, have been closed against me!"

"Yes, they are," said he; "you will not be allowed to speak there."

"I am on my way to the Valley," saidSmith,"and I expect to talk to the people; and now I ask you whether it will be agreeable to your feelings for me to preach in the house? I have often done so in times past, and I would like to do so in future, whenever I may come down to visit my friends."

"The church will not expect you to preach in their house, BrotherJohn; and I think, myself, that you had better not doit."

"Brother Denton, you say that you have no doubt that I am a Christian; now, as you do not believe in falling from grace, I may have only gone into some error, from which I may be brought back again."

"But I fear," replied he, "that you will do great injury to the cause before you are brought back."

"Will you not, then, turn, and go with me to the Valley?" askedSmith."Let me preach in the house, and I will confess all my departures from the Baptist faith, and give my reasons for every change. When I am done, I will take it as the part of a father, if you will then get up and tell me wherein I have made any departure from the Word of God."

"No, no, BrotherJohn; such a course would get us into controversy."

"Well, the controversy shall be friendly," saidSmith;"and, my dear brother, it may convert me from the error of my way."

"You well know,John,that you can out-talk me."

"Were you standing on Gospel ground, Brother Denton, I have not the vanity to suppose such a thing; but, to tell you the truth, I do believe that I can out-talk any man within five hundred miles of the place where we now sit, that will attempt to defend the ground you occupy."

Location Of The Grave Of Isaac Denton

Isaac Denton is buried in the township of Albany, Kentucky, in the cemetery at the old Clear Fork Baptist Church. The cemetery is located on Kentucky Rd. 738 about 1 mile sw out of the courthouse in Albany. Take Txennesse Rd. Hwy. 127 south from town, and bear right on Peolia Rd, CO 738. Within a very short distance the road will take a hard turn to the right. In that hard turn you will bear to the left on Clear Fork Road. Be sure to take the left fork, as the road immediately forks. To the right is Hill Crest Dr. To the left is Clear Fork Rd. Go to the end and the cemetery will be near the church. The actual GPS location of the grave is: 36°40'30.1"N 85°07'33.5"W / or D.d. 36.675019,-85.125965 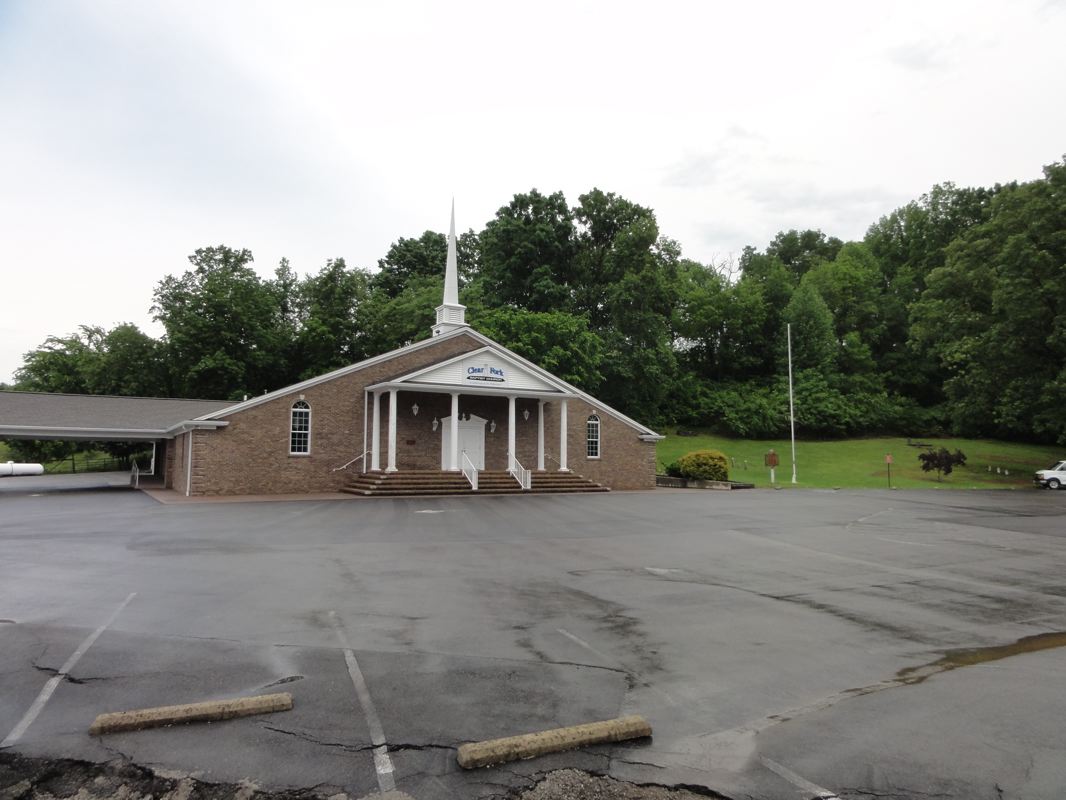 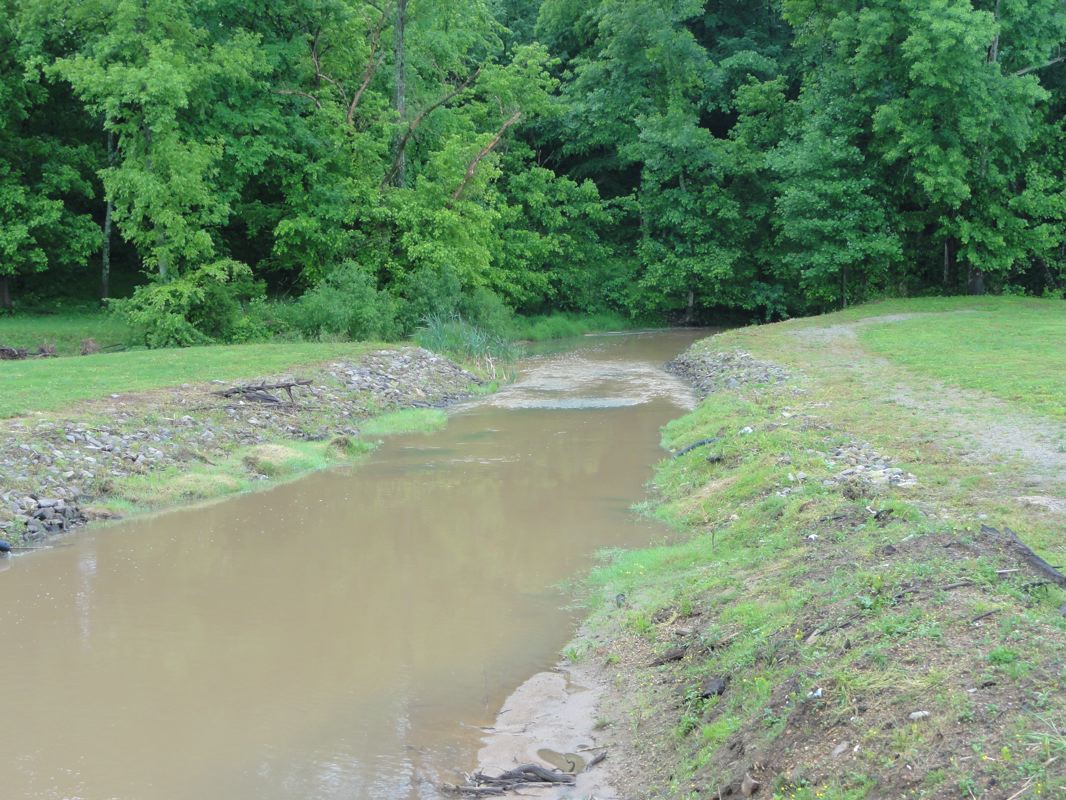 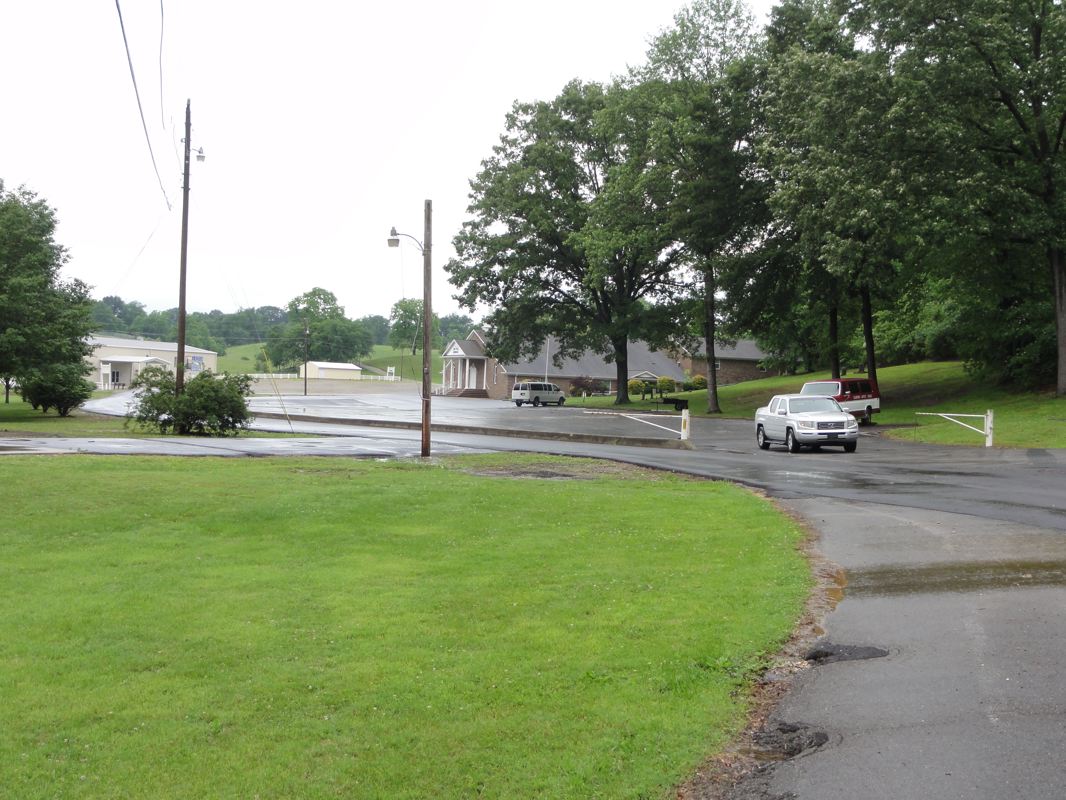 Back Toward Clear Fork Church From Rear Of Property 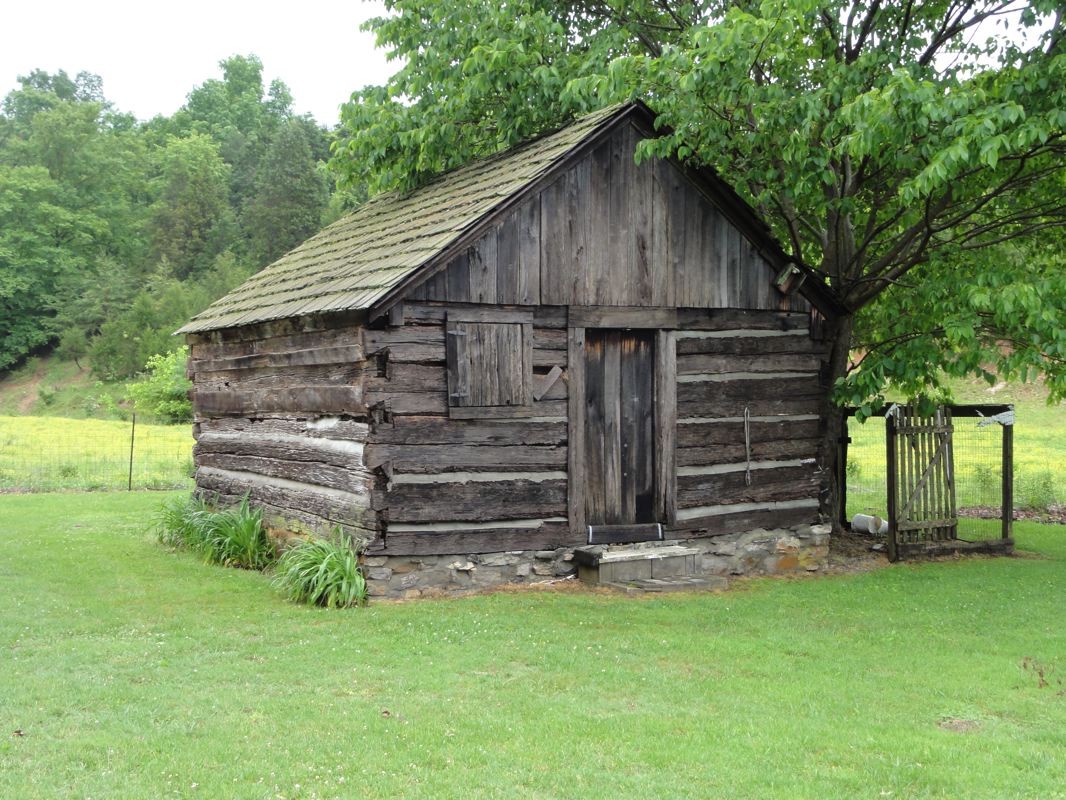 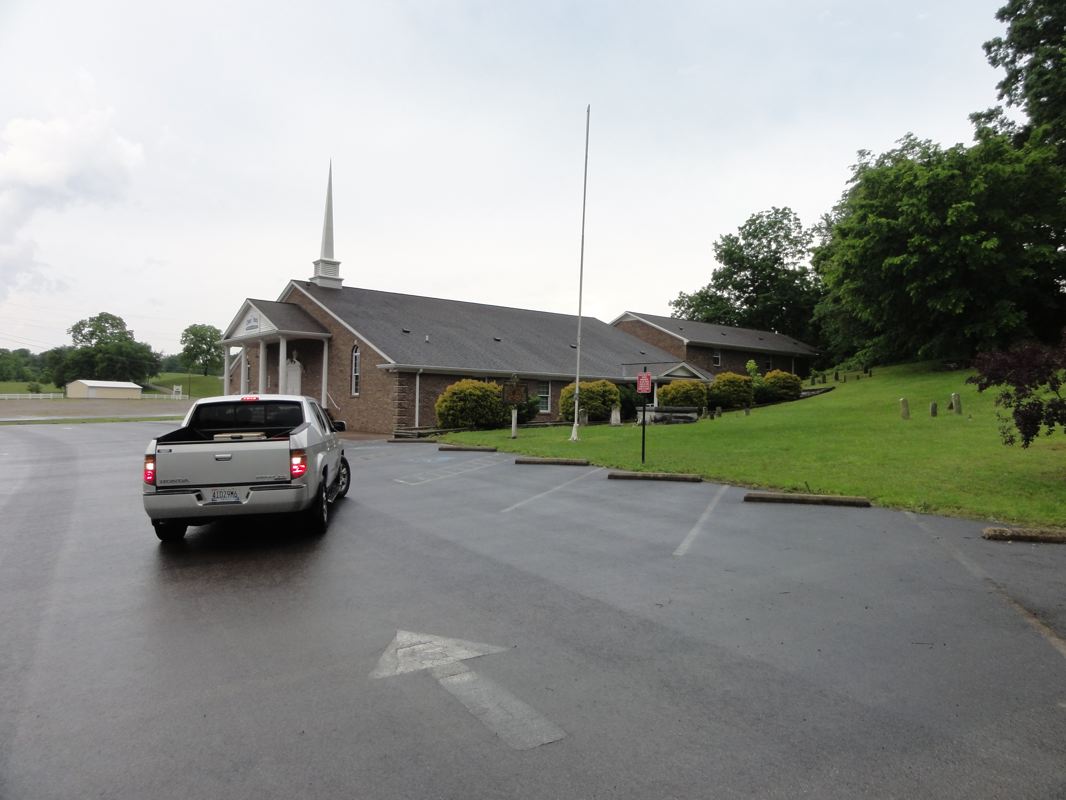 Old Cemetery Where Isaac Denton And Family Are Buried 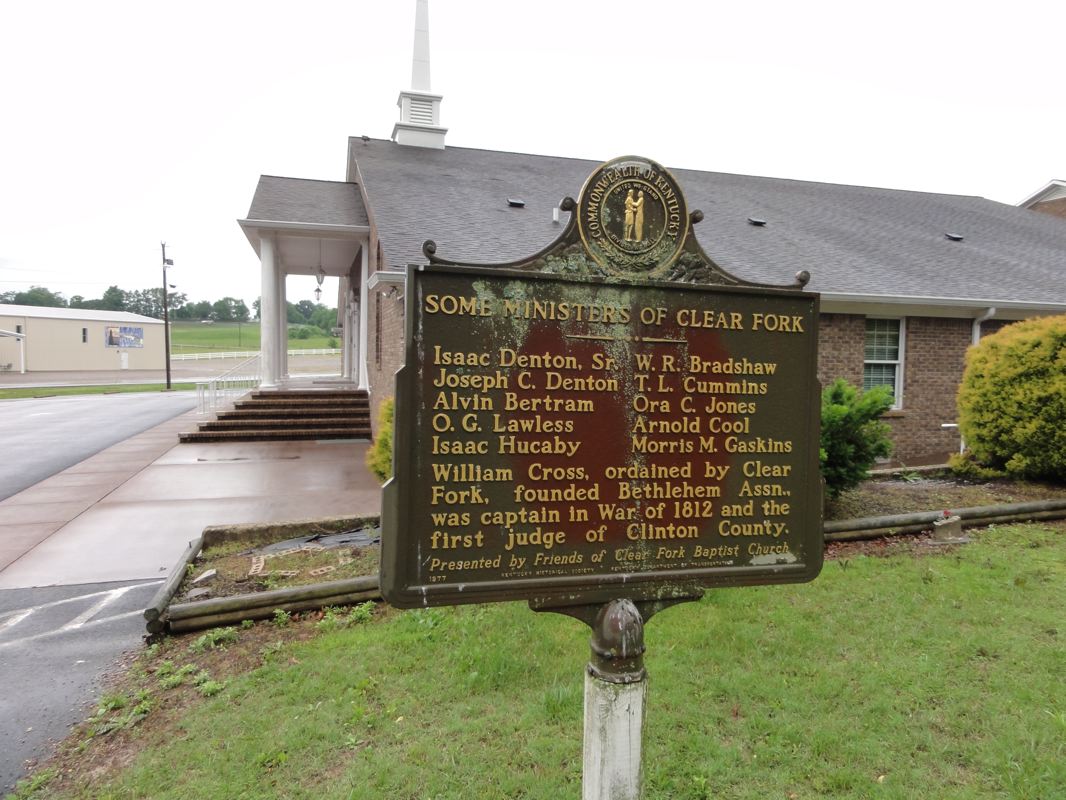 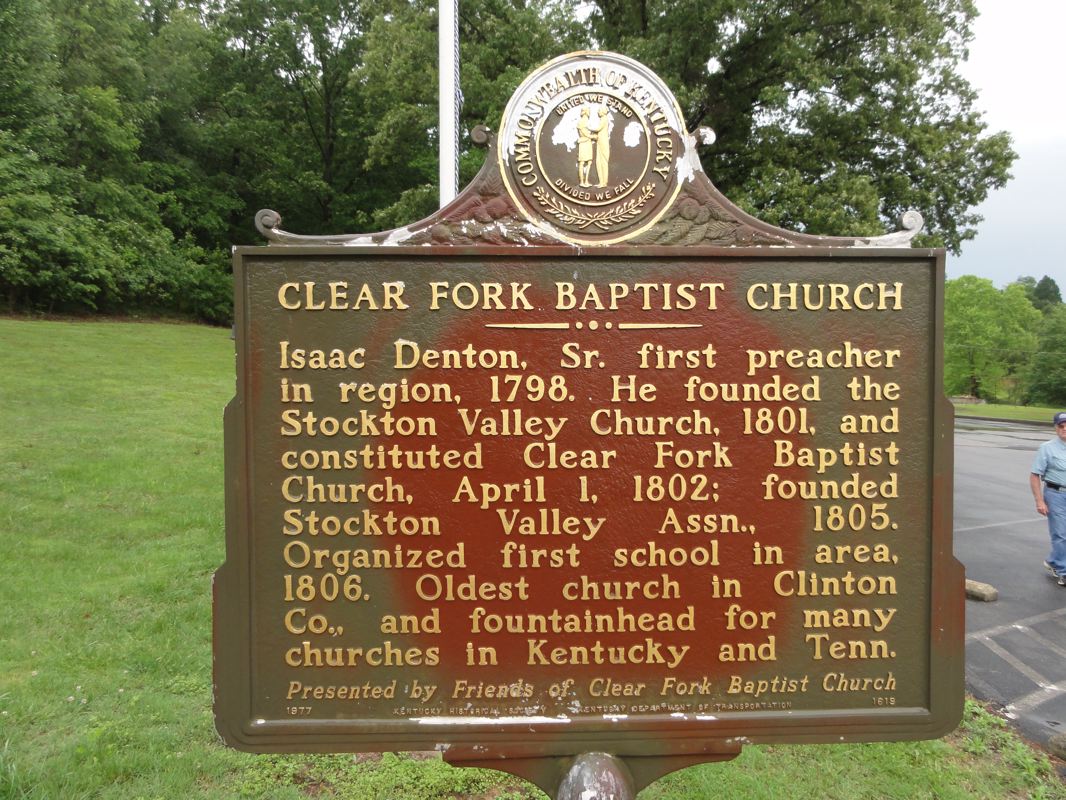 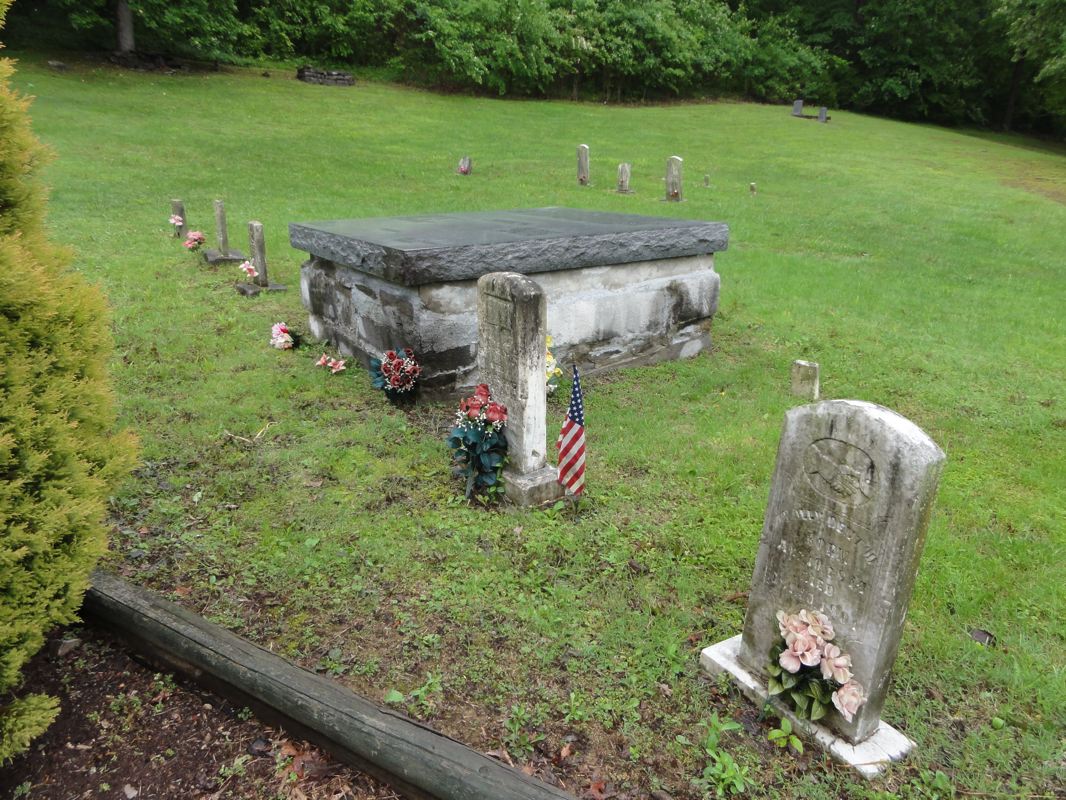 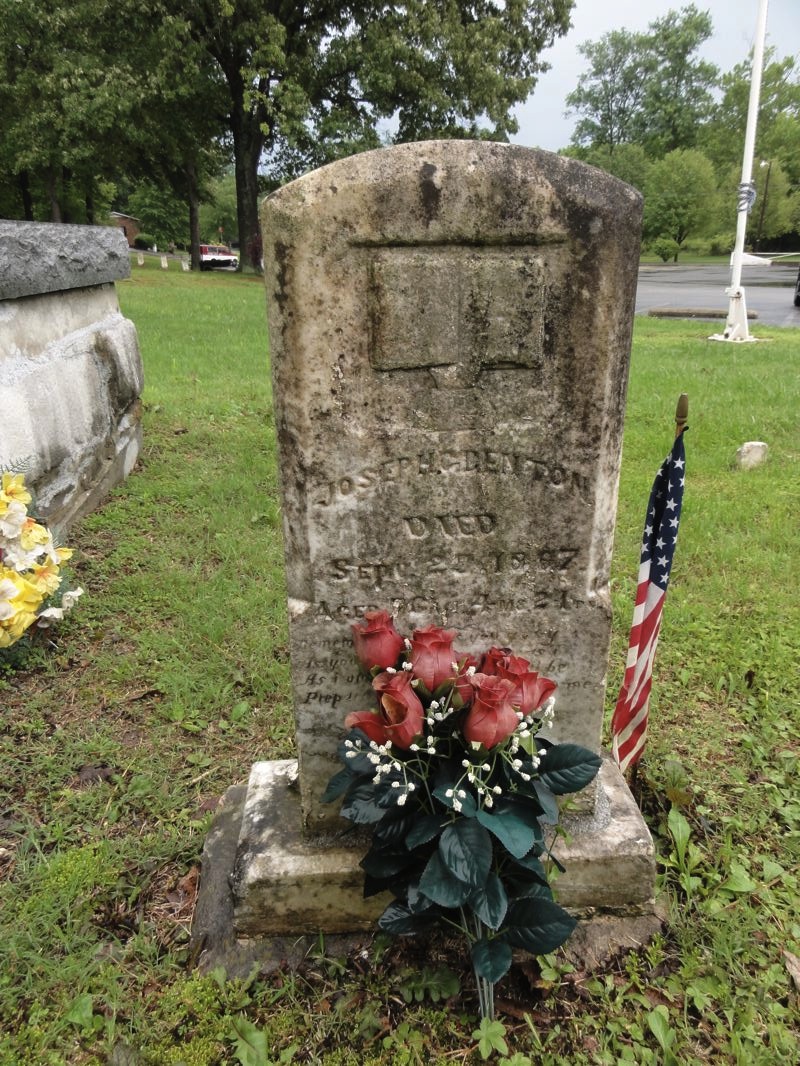 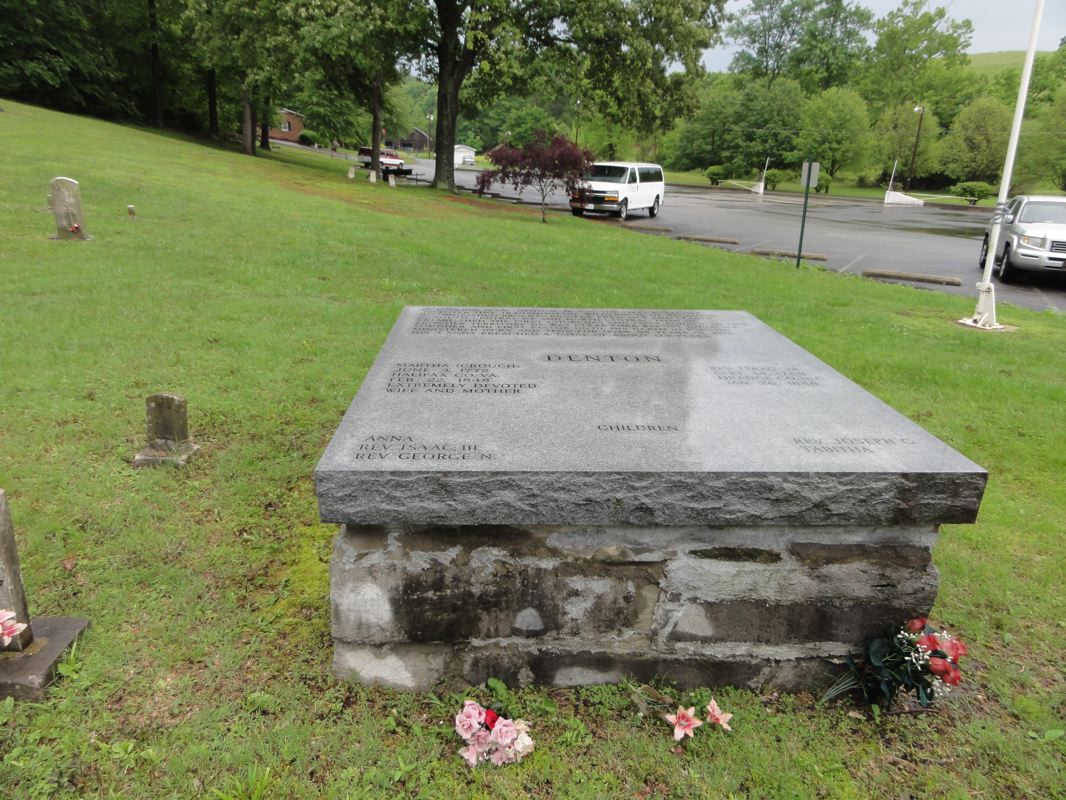 In 1798, Rev. Isaac Denton, Jr. was the first preacher
to enter this transmontane wilderness. He became a
distinguished, prolific, pioneer preacher and leader
in South Central, Ky and North Central Tenn. He
Established the first churches and first school in this
frontier territory. He was Clear Fork Baptist Church's
founder and first pastor until his death in 1848. He
ministered in Ky., and Tenn. for over 55 years. He and
his 3 sons preached a total of about 175 years. 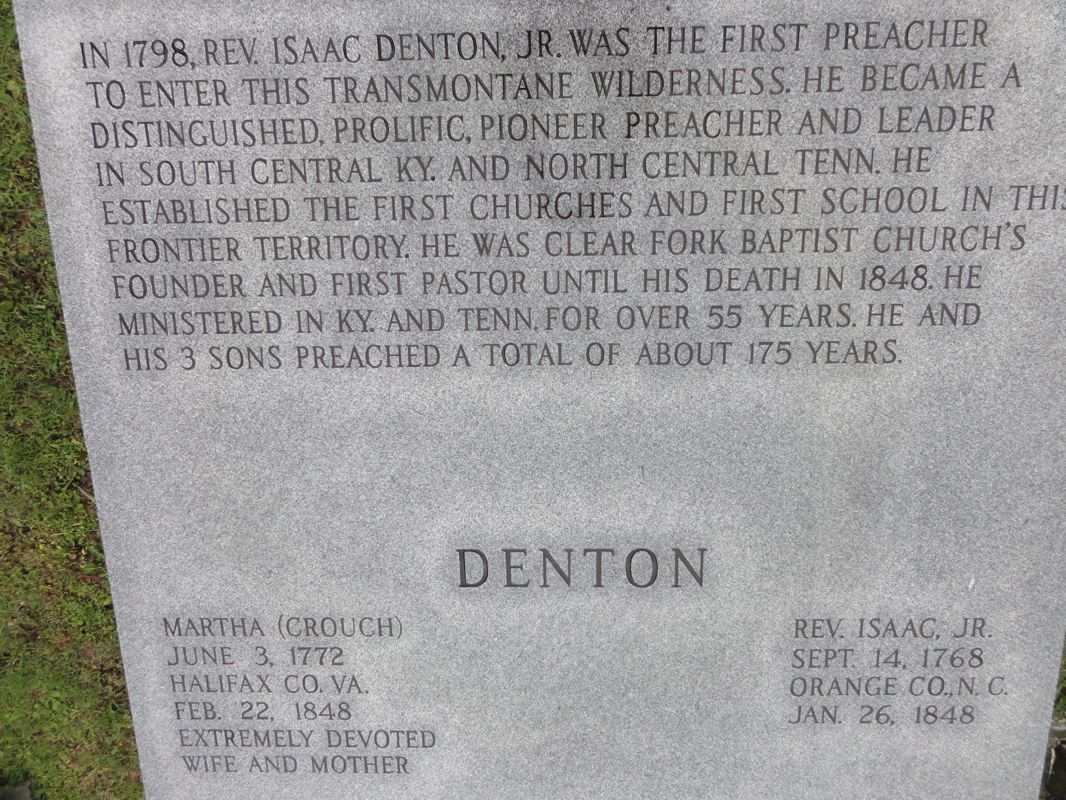 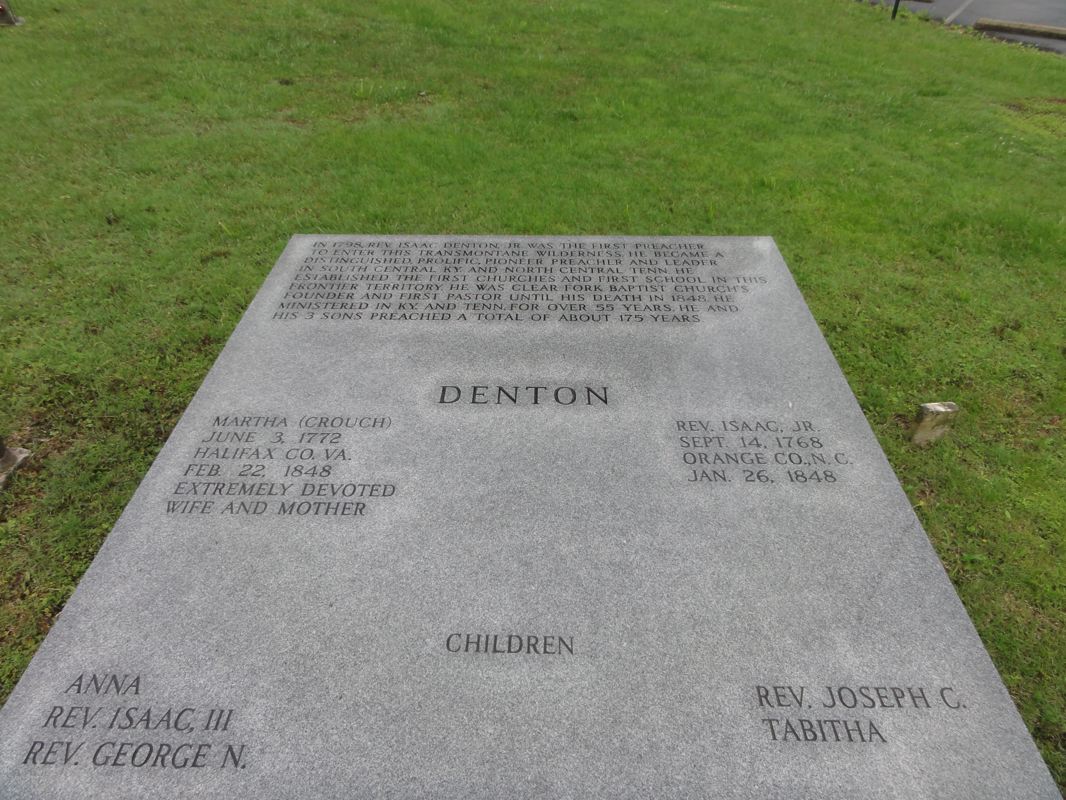 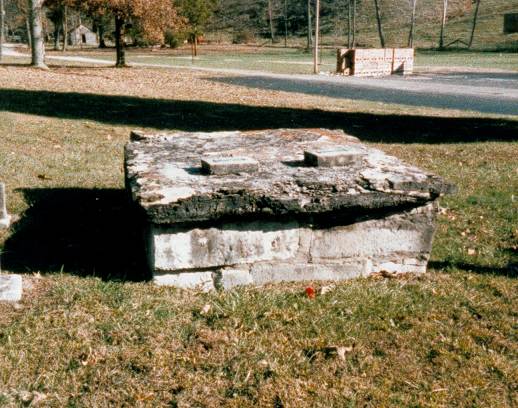 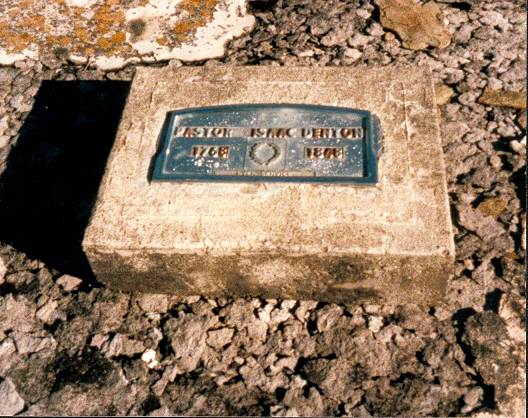 Special Thanks: Myrna Perry was a long-time librarian for David Lipscomb University and Freed-Hardeman University. She is retired now, living in Beamsville, Ontario, Canada. She has had a great interest in the Restoration Movement for many years. On one of her many car trips from north to south, she found the graves of Isaac Denton. Our sincere thanks are extended to her for providing the pictures of the older grave shots you see on this page.

In May, 2011, your webeditor, along with C. Wayne Kilpatrick and Tom L. Childers, visited the grave of Isaac Denton. Thanks to them for helping to get the newer pictures that have been added to the site.