Thornton F. Johnson is a name that is seldom heard when discussing prominent people of the Restoration Movement. However, this was a man who was highly educated, and helped in the founding and establishing of the brotherhood's first institution of higher learning, Bacon College. Johnson was born May 26, 1805, in Orange County, Virginia. He was a graduate of West Point, and a teacher at Georgetown College, Georgetown, Kentucky in 1829. He taught mathematics, civil engineering, and French. He was married to Margaret Louisa Warren (1813-1896), and together they had five children, four boys, William M. Johnson (1833-????); John T. Johnson (1836-????); James B. "Jimmy" Johnson (1846-????); and Warren Johnson (1851-????). His daughter was Annie E. Johnson (1842-1933).

T.F. Johnson associated with Barton W. Stone's Christian Church at Georgetown, much to the disliking of the Baptists who operated Georgetown College. In fact, prejudice against the reformers was so strong that when Stone and Johnson made a trip to Jacksonville, Illinois, in 1832, Johnson returned to find himself dismissed from the faculty. However, in the ensuing 18 eighteen months without its most popular teacher, Georgetown College became a ghost of its former self. In April of 1834 the college invited him to return to his old post.

Together with an elderly teacher of Latin, a Mr. Thompson, he pitched into the work of reviving Georgetown College the very next month. At the beginning only nine students showed up, and seven of these were the sons or wards of Reformers. To Johnson this showed that Baptists had lost confidence in their school and felt no interest in reviving it. Nevertheless, he fell to work. By year's end there were twenty-five students enrolled; the second year there were sixty, forcing him to employ two additional teachers; and the third year closed with 104 students and an active faculty of seven members. During this period the college had been without a president; Johnson had carried the weight of administration through the 1834-36 revival of the school.

At this point the Baptists, in the person of newly elected President B. F. Farnsworth, came forth to reclaim their possession. The old heated attacks on Reformers started afresh, and Johnson could see that his future in the school which he had saved promised to be brief. He began to make plans to open a female academy, but not to inaugurate it until the following spring (1837). When he learned, however, that President Farnsworth had employed as teachers two of the most vitriolic enemies of "Campbellism" then writing in the sectarian press, he decided to resign at once. This was November 1 or 2, 1836; was scheduled to begin November 7.

At first Johnson thought he would speed up the opening of his contemplated female academy. But then his friends prevailed upon him not to desert his engineers, many of whom had come from far corners of the United States just to study under him. "It was precisely at this point," Johnson later reported, "that I first conceived the idea of a separate Collegiate Institute." 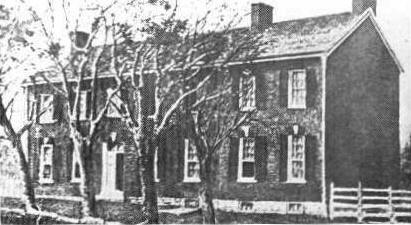 He purchased a large brick house on what is now Clinton Street, a block directly south of the Baptist and Christian Churches. Then on the first day of the new term (November 7) he resigned from Georgetown College and began the same day to assemble a faculty. He decided to give Georgetown College the advantage by opening his rival college a week later. But Thursday morning, November 10, forty-five students showed up at Johnson's new house, unsolicited, and when he formally opened the new college the following Monday, there were fifty or sixty. The first five months closed with 140 students, and the first year with 203. Tuition was $21.00 for a five-month term; board and lodging in the homes of Georgetown, $2.00 per week.

Johnson gave his new school the provisional name of "Collegiate Institute and School of Civil Engineers." He and his friends succeeded in persuading Walter Scott, the celebrated frontier evangelist and Carthage editor, to act as president pro tempore. The faculty which he assembled consisted of five professors plus two teachers for the preparatory department, as follows:

J. Crenshaw and U. B. Phillips, teachers in the preparatory department."

As long as Bacon College continued to operate under that name, its curriculum changed but little. Though religion definitely had its place, both in the offerings of President Scott and Doctor Knight and in the lives of all the teachers, the prevailing interest in the new school was scientific. It is not surprising, then, that the "Collegiate Institute" was soon named Bacon College, in honor of Francis Bacon, and his inductive scientific method. Disciples, indeed, felt they were applying that method to the study of the Scriptures in their current reformation, and saw their religious work as quite consistent with the new science. These same men were enthusiastic about the empiricism of John Locke.

Bacon College was chartered February 23, 1837, after a bitter debate and a sharply divided vote of the Kentucky Legislature." Baptist opposition was understandably vigorous; the success of Bacon College in its first years was purchased at the expense of Georgetown College, whose enrollment in the fall of 1836 declined to twenty."

Johnson was a great advocate of education in his lifetime as well as working to restore New Testament Christianity. T.F. Johnson passed from this life on October 14, 1852, at the age of 47,

-Sources: Much of this edited biographical sketch comes from Lexington Theological Seminary 1865-1965, by Dwight E. Stevenson, The Bethany Press, St. Louis, MO, pages 401-404, and other family information came from Ancestry.com

T.F. Johnson is buried in the Georgetown Cemetery, Georgetown, Kentucky. It is locates south of the city of Georgetown on Hwy. 25 heading toward Lexington. After Clay St. the cemetery will be on your left. Enter the cemetery, and make your way to the north. There will be a small road running behind his grave. Johnson is located here. While in this cemetery, you will not want to miss going by and seeing the grave of John Allen Gano on map below. 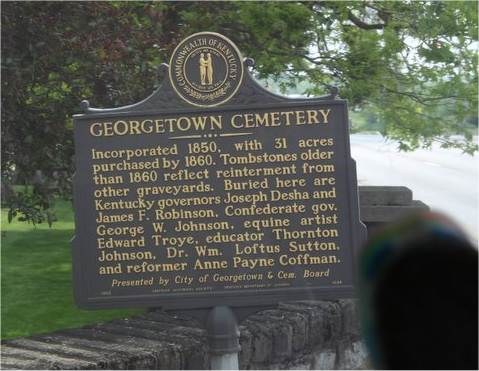