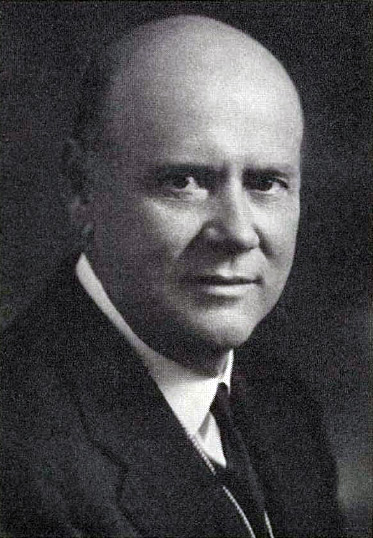 Alexander Bigby Lipscomb was born in Franklin County, Tennessee, May 1, 1876. He was the son of Granville and Mary Annie Swift Lipscomb. He received his education at Transylvania College at Lexington, Kentucky and Vanderbilt University in Nashville, Tennessee. The first period of his life was spent in Louisville, Kentucky where he preached for the Highland Church, was editor of a magazine and associated with the Louisville Courier-Journal. Later he moved to Nashville, Tennessee, and served as editor of the Gospel Advocate from 1912-1920. He preached for the Russell Street Church in Nashville for a number of years and served as president of David Lipscomb College for a short time. His last years were spent in Valdosta, Georgia, where he preached for the church in that city, and served as president of the city's board of education. He also was a staff writer for the Christian Leader and the World Traveler. He died in Nashville, Tennessee, October 4, 1940.

Note: A.B. Lipscomb served one year as the President of David Lipscomb College — 1920-1921. He was the institution's 7th President.

When the Nashville Bible School began, nearly fifty years ago, there were three teachers during the first year-J. A. Harding and two of the Lipscombs, David and his older brother, William.

The Lipscomb family came from Virginia and settled in Franklin County, Tenn. If not from the aristocratic, they were at least from the sturdy stock of Virginians. The Lipscombs are brainy, intellectual people, known by all the citizens of Nashville and by many of the citizens throughout the state of Tennessee.

Alex Bagby Lipscomb was the son of Granville Lipscomb, who was a half-brother of David, Sr. He was reared on an adjoining farm to the David Lipscomb farm, which became the property of this institution.

It was said of Jehoiada, the priest, who had been virtually regent during the early days of the reign of Joash, one of the good kings of Judah, that "they buried him in the city of David among the kings, because he had done good in Israel, and toward God and his house." These words are appropriate and might be applicable to the burial of A. B. Lipscomb, which took place day before yesterday (October 5) in the beautiful Cave Hill Cemetery, Louisville, Ky.

I remember assisting in a funeral once in that city for a poor woman, and we took her with simplicity—just a few of us, perhaps with a little handful of flowers through the gates of that magnificent city of the dead, where there are monuments and mausoleums fit for kings and potentates. On we went, winding amidst splendor, till we came to the pauper district where homeless and friendless people are interred.

I can imagine that Brother Lipscomb was buried, not in the potter's field, but in the section of beauty and splendor among the aristocratic, in company with the prominent citizens of Louisville, the city called the "Gateway to the South." On this we will not pass judgment; but whatever might be said, Brother Lipscomb wanted the best. He felt that he had chosen the best companion for life. He wore splendid clothes; he lived in the best of houses, because he built the houses to sell and wanted honest houses. His residence in Valdosta, Ga., where I had the honor of being entertained once, was the envy of the people of that beautiful little Georgia city. He selected the best of literature for his library, and knew how to cull and select the best portions for his speeches. He wanted his intimate friends and associates to be the best.

This discrimination may not all be an example for us who proclaim the good news of the gospel, for it is Jesus of Nazareth whom we should imitate, the one who was poor and needy himself, and who associated with the poor and the delinquent.

But we can, at least, learn from Brother Lipscomb and his life the lesson of dignity and of putting the religionof our Lord upon a high plane, making out of sermons moral, spiritual, and literary gems. Brother Lipscomb did not appeal to the rabble; he appealed to the thoughtiul, the intellectual, the cultured. How we do need emphasis upon the cultural side of our religious life! When preachers resort to sophistry in logic, to distasteful rhetoric, to humor and invective, and even the vulgar, it is time to call a halt; and such men as Brother Lipscomb, choice in diction, chaste in thought, and dignified in bearing,are greatly needed to influence the young and inexperienced in an age of mental and moral confusion.

Alex Lipscomb was a man of many parts. In his young days he became a student of literature and expression. He was one of the first instructors in the art of expression in the old Nashville Bible School. Early in life he became a preacher, having first studied law with the idea of being a lawyer; but, at his mother's request, he gave it up. Much of his development in the line of preaching took place in Louisville. In addition to his work as a preacher, he was connected with one of the leading newspapers of that city. When there was an urgent need for an editor of the Gospel Advocate, BrotherLipscomb's experience in the editorial field made him an acceptable man for that important post.

Having moved to Nashville, Brother Lipscomb became the regular preacher for the Ninth and Russell Streets Church, in this city, at that time regarded as the leading unit of the churches of Christ in the city. Here, too, he was selected as one of the trustees of David Lipscomb College. He became chairman of the board, and eventually was chosen as president of the institution.

Several years after severing connection with the David Lipscomb College, Brother Lipscomb and his wife moved to Valdosta, Ga., where he soon rose to prominence in that city, and where he was held in the highest esteem by the congregation for which he labored—a congregation which, in earlier days, had come under the powerful influence of James A. Harding, one of the illustrious founders of this institution.

It must have been a cross to Brother Lipscomb to becompelled, on account of ill-health, to relinquish his workin Valdosta, and a cross to those brethren to part with him.

With the passing of A. B. Lipscomb we are again reminded of the rapidity with which the years race by, and of the changes that are constantly taking place in the affairs of life. When Brother A. B. came to Nashville to be editor—at first news editor—of the Gospel Advocate, it was for the purpose of placing the paper in the hands of younger men. The venerable David Lipscomb and E. G. Sewell knew then that they must soon cease from their labors, and Brother Lipscomb rejoiced that his kinsman and one of his own name could be placed in position to carry on his work. The associates of Lipscomb and Sewell—E. A. Elam, J. C. McQuiddy, F. B. Srygley, and M. C. Kurfees—were not then reckoned asold men. They were older than A. B. by a good many years, but they were from twelve to fifteen years younger than Lipscomb and Sewell. But now even these younger men have grown old and laid off their armor. More poignant still, the young man, A.B. Lipscomb, has also been mustered out of service and gone to join those who appointed him to carry on their work! When I think of these things, I feel as David did when he lamented the death of Abner: "I am this day weak."

I was associated with A. B. Lipscomb in some things both pleasant and unpleasant, but all the unpleasant incidents were long ago forgotten and we were brothers and fellow laborers in the great cause we love. While I grieve over his going, I honor his memory and commend his work.

Brother Lipscomb published two or three books that are still valuable. He was not so much the author of these books as the compiler. He requested men to write on collected things that men had already written and published these writings in book form. Some of these books, if not all of them, are still obtainable. Three of these books are: "Consolation," "The Profitable Word," and “Christian Treasures.”

Directions To The Grave Of A.B. Lipscomb

A.B. and Lotta Fritton Lipscomb are buried in the Cave Hill Cemetery in Louisville, Kentucky. The cemetery is located at 791 Baxter Ave. (Hwy. 31). From I-64 take Exit 8 and turn left (west) go to next traffic light (should be Hwy ALT-60) Should see the cemetery on the right. However you will need to enter the cemetery from the Hwy. 31-E (Baxter Ave.) entrance. Do this by staying on ALT-60 until you turn right on Hwy. 31-E (Baxter Ave.) (North) then entrance should be up on right. When entering the cemetery go to the office and get a map of the cemetery. Lipscomb is in Section N. Lot 223 Space 8A. While at Cave Hill be sure to visit the graves of several other gospel preachers. Google Map list and location of all HERE. 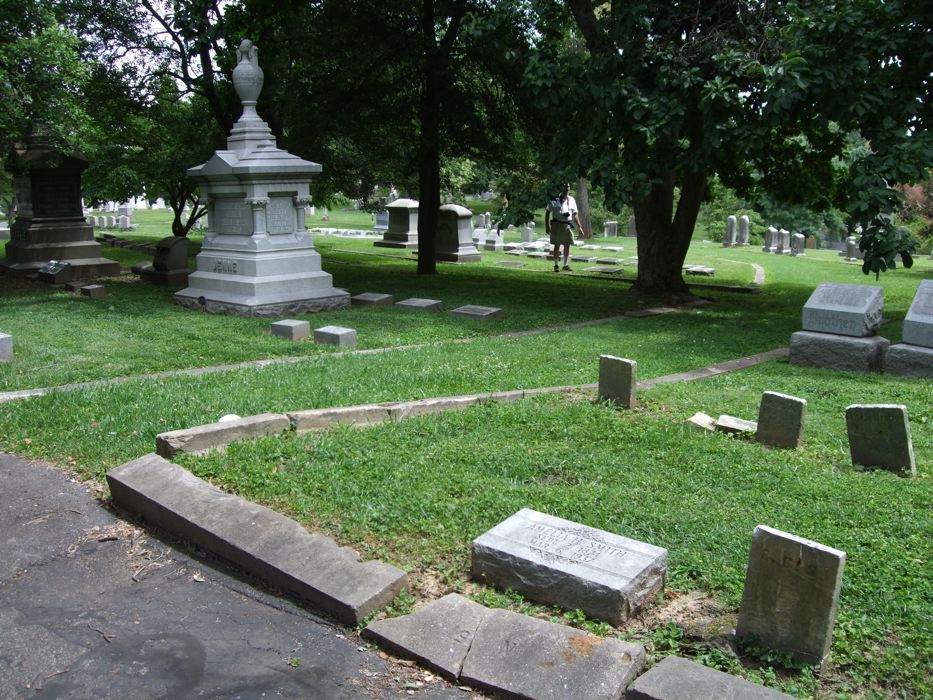 Tom L. Childers Pointing To The Lipscomb Grave In Distance 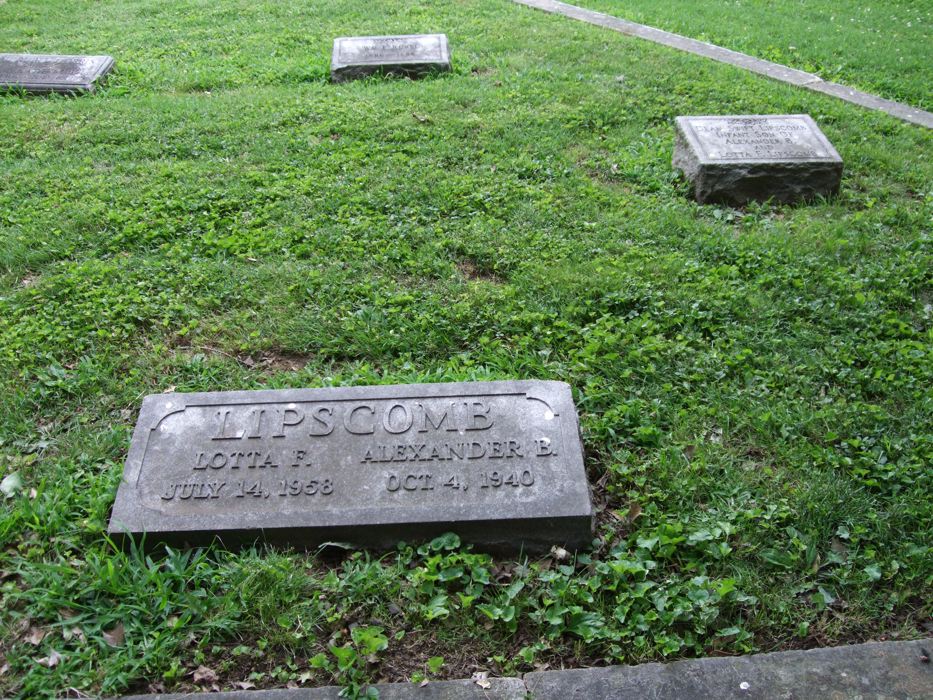 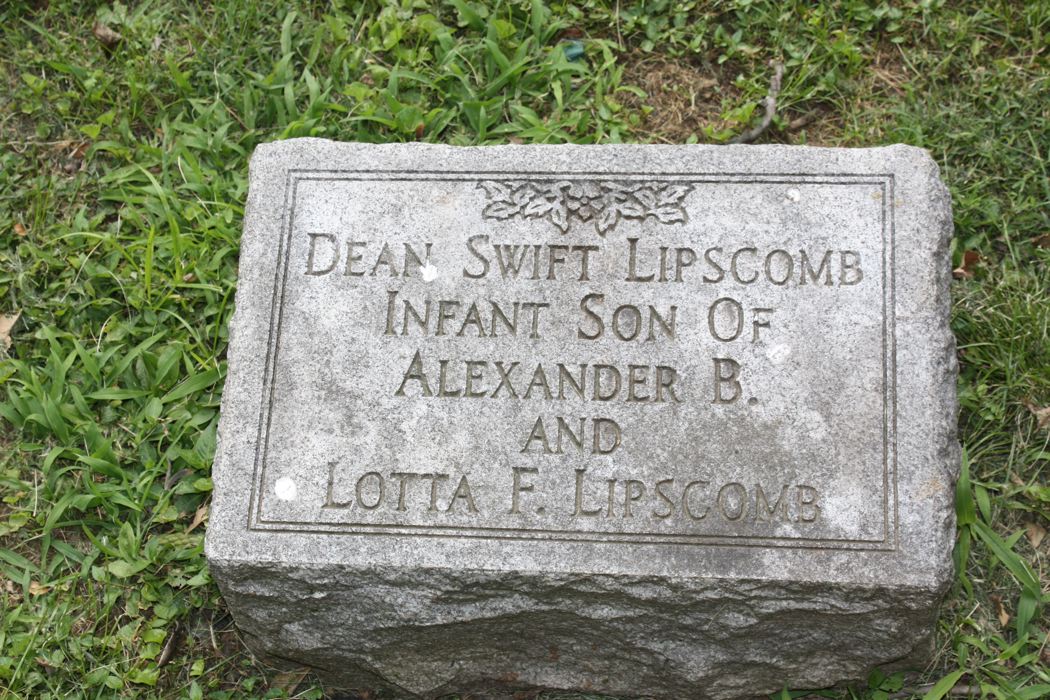 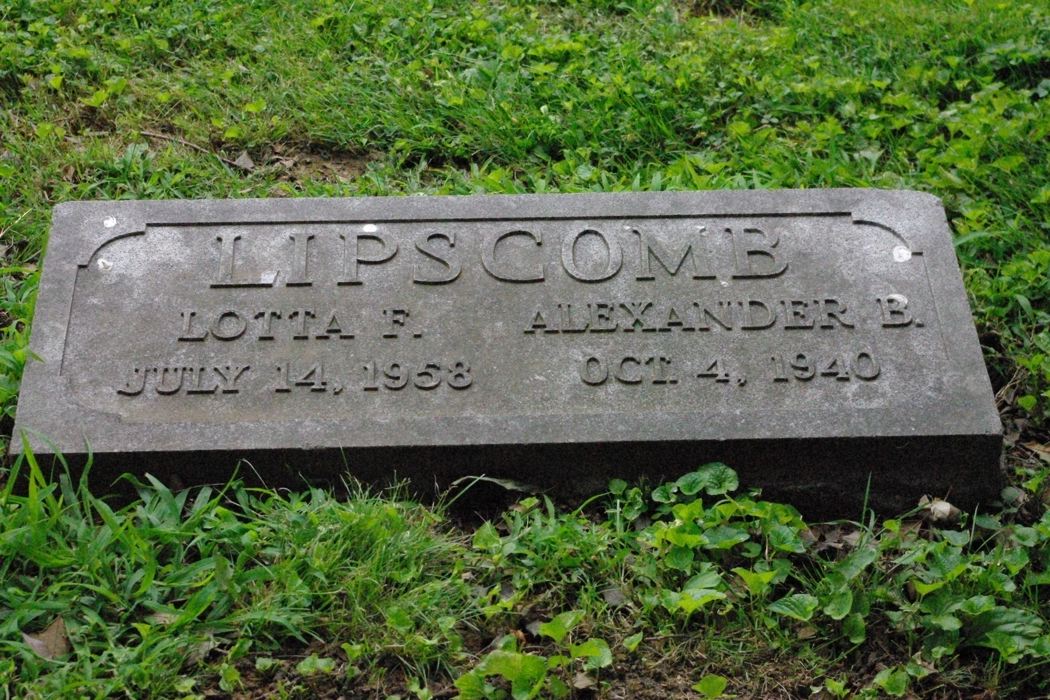