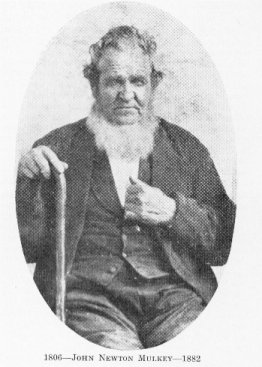 Buried At The Mulkey Meeting House, John Newton Mulkey was the son of the renowned John Mulkey, who initially led a group of Baptists to give up their traditions only to follow the Bible. Mulkey also was a very successful preacher of the gospel in his own right. Also buried in the grave yard at the Mulkey Meetinghouse are numerous Revolutionary soldiers as well as the sister of Daniel Boone, Hannah Boone Pennington. Read this article on John Newton Mulkey. 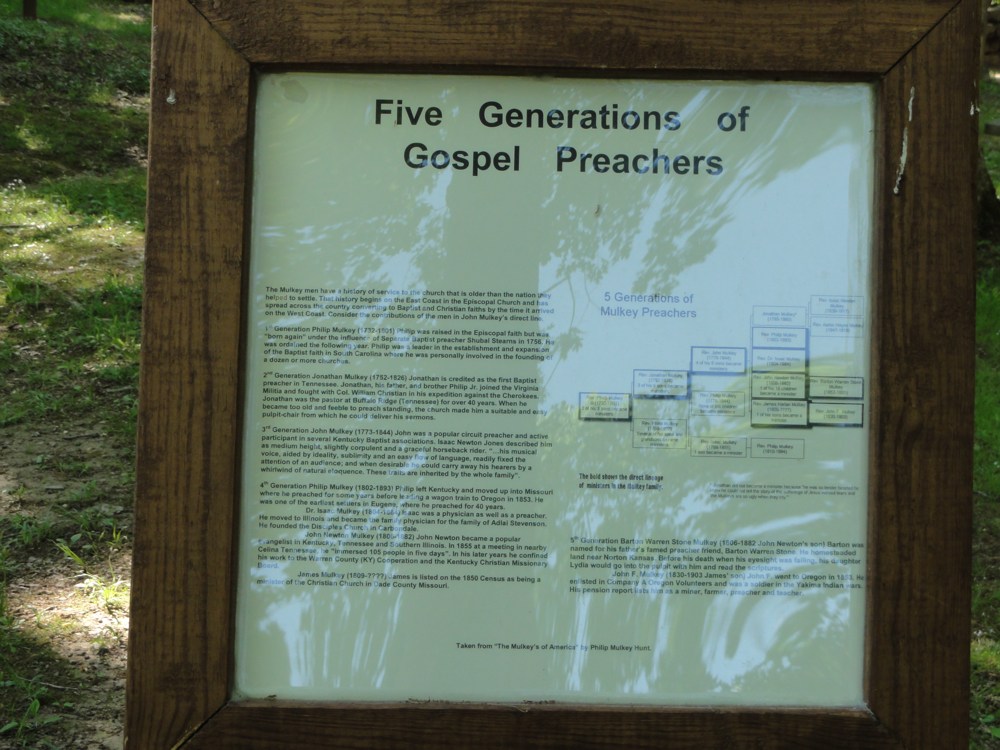 The Mulkey men have a history of service to the church that is older than the nation they helped to settle. That history begins on the East Coast in the in the Episcopal Church and has spread across the country converting to Baptist and Christian faiths by the time it arrived on the West Coast. Consider the contributions of the men in John Mulkey's line.

1st generation Philip Mulkey (1732-1801) Philip was raised in the Episcopal faith but was "born again" under the influence of the Separate Baptist preacher Shubal Stearns in 1756. He was ordained the following year. Philip was a leader in the establishment and expansion of the Baptist faith in South Carolina where he was personally involved in the founding of a dozen or more churches.

2nd generation Jonathan Mulkey (1752-1826) Jonathan is credited as the first Baptist preacher in Tennessee. Jonathan, his father, and brother Philip, Jr. joined the Virginia militia and fought with Col. William Christian in his expedition against the Cherokees. Jonathan was the pastor of Buffalo Ridge (Tennessee) for over 40 years. When he became too old and feeble to preach standing, the church made him a suitable and easy pulpit-chair from which he could deliver his sermons.

3rd generation John Mulkey (1773-1844) John was a popular preacher and active participant in several Kentucky Baptist associations. Isaac Newton Jones described him as medium height, slightly corpulent and graceful horseback rider." . . .his musical voice, aided by ideality, sublimity and an easy flow of language, readily fixed the attention of an audience; and when desirable he could carry away his hearers by a whirlwind of natural eloquence. These traits are inherited by the whole family."

Dr. Isaac Mulkey (1804-1884) Isaac was a physician as well as a preacher. He moved to Illinois and became the family physician for the family of Adlai Stevenson. He founded the Disciples Church in Carbondale.

John Newton Mulkey (1806-1882) John Newton became a popular evangelist in Kentucky, Tennessee and Southern Illinois. In 1855 at a meeting in nearby Celina, Tennessee, he "immersed 105 people in five days." In his later years he confined his work to Warren County (KY). Cooperation and the Kentucky Christian Missionary Board.

James Mulkey (1809-????) James is listed on the 1850 Census as being a minister of the Christian Church in Dade County, Missouri.

5th generation Barton Warren Stone Mulkey (1806-1882 John Newton's son) Barton was named for his father's famed preacher friend, Barton Warren Stone. He homesteaded land near Norton, Kansas. Before his death when his eyesight was failing, his daughter Lydia would go into the pulpit with him and read the scriptures.

John F. Mulkey (1830-1903 James' son) John F. went to Oregon in 1853. He enlisted in Company A Oregon Volunteers as was a soldier in the Yakima Indian wars. His pension report listed him as a miner, farmer, preacher and teacher. 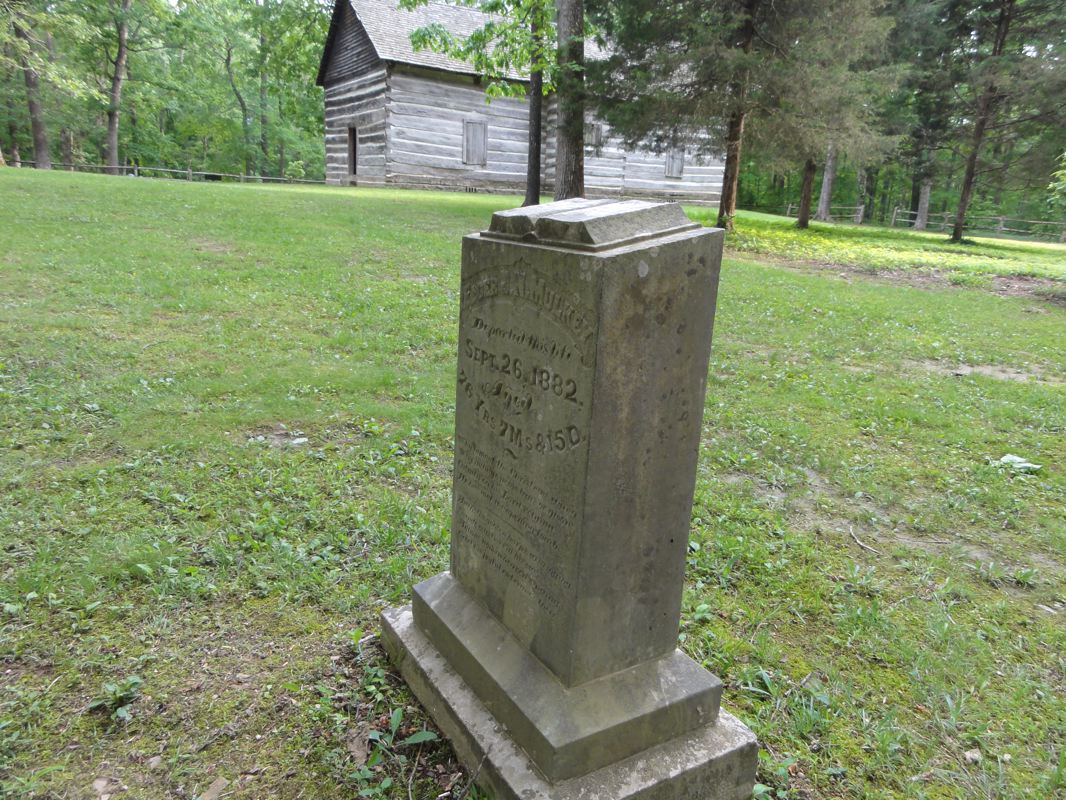 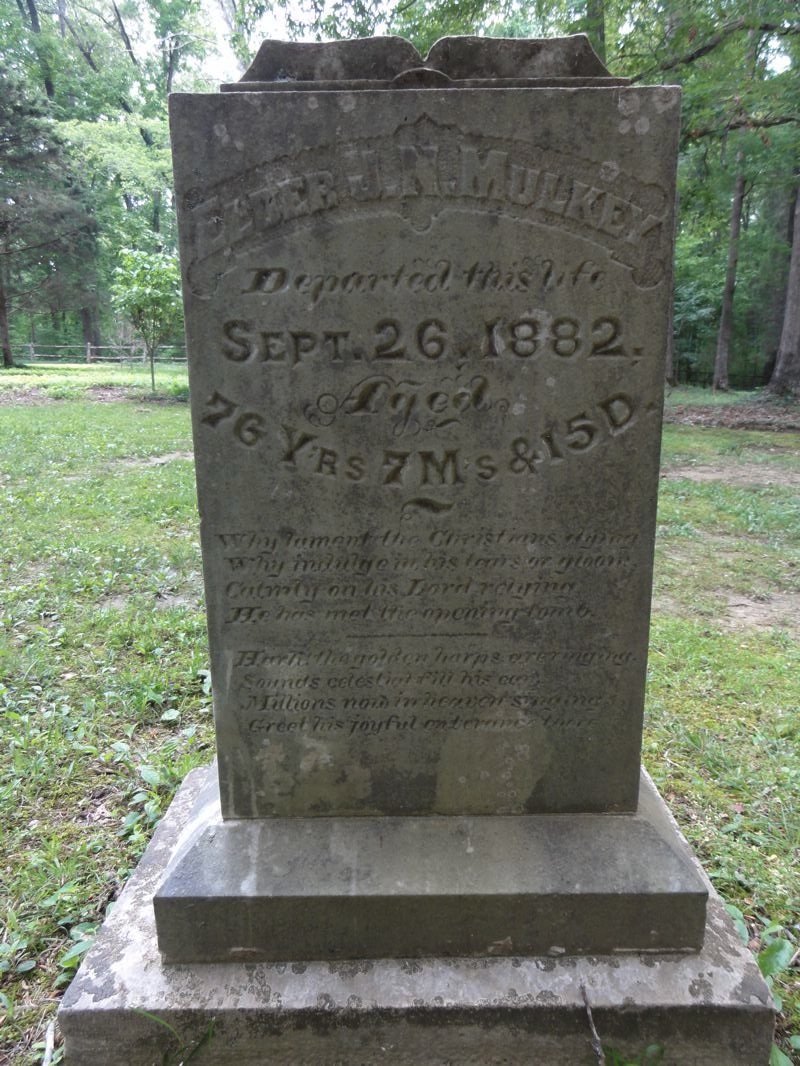 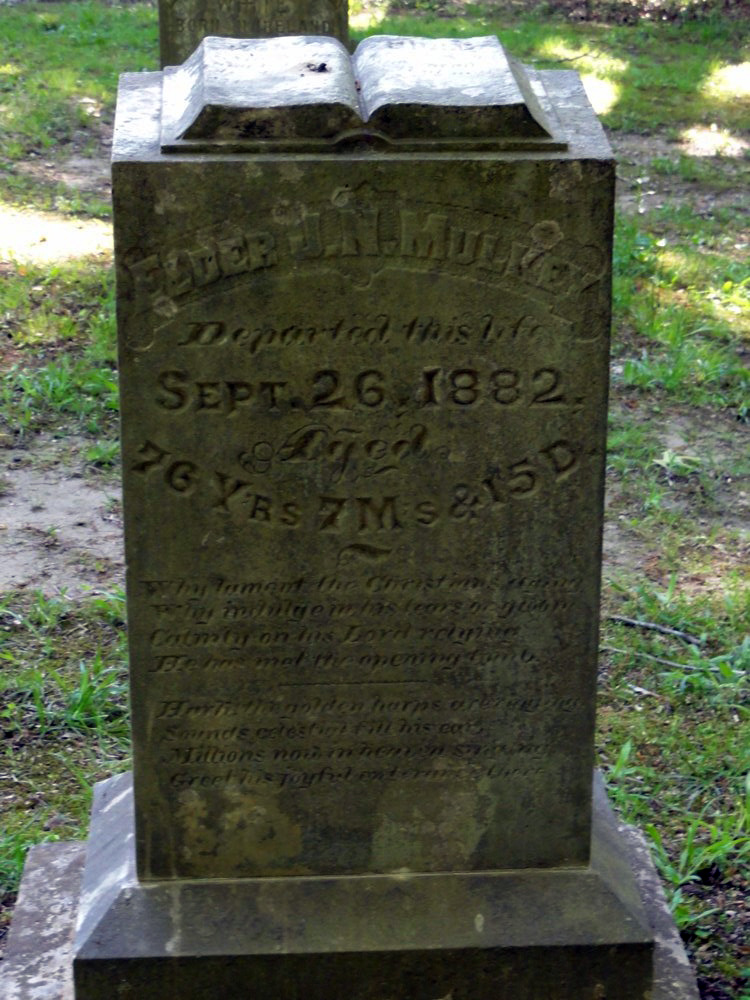