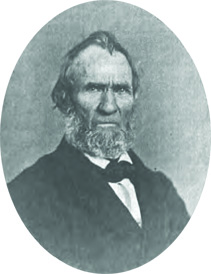 The name of John Rogers is one familiar in the records of religious progress in the West, in the present century. As an earnest and highly successful preacher and writer, he is known wherever the publications of his brethren have been read for the past forty years. Like many of the pioneer-workmen in the reformatory work in which he has been engaged; he comes, not by regular ecclesiastical education, training, and appointment, to his position as a minister of the Gospel; but, surrounded in his youth by circumstances of entire dependence on his own efforts for support, with but very limited opportunities for education, he starts in his Christian and ministerial career from a cabinet-maker's workshop, to become a pioneer preacher; and, per consequence, to support himself, in part at least, by the sweat of his brow, while he was enabled to preach the Gospel to perishing man.

The subject of this sketch was born in Clark County, Ky., six or seven miles from Winchester, on the 6th of December, A. D. 1800. He enjoyed but little domestic religious training, his father adopting the philosophy of the infidels Paine and Hume, his mother, however, being an immersed Methodist. These facts, together with the necessities that removed him from the parental roof early in life, left him more immediately to decide for himself what his religious life should be.

At an early age he became an indentured apprentice to Messrs. Batterton, cabinet-makers, at Millersburgh, Ky., and, while under this engagement, at the age of eighteen years, united with the Christian Church, under the labors of his especially venerated and devoted friend and brother, Barton W. Stone. He had none of the prejudices of early religious education to encounter; hence, the stigmas and odium poured out on those who dared to avow dissent from the popular creeds of the time, fell powerless on him. With him, as is usual with pioneer reformers, the epithets "Heretic," " Deist," "Atheist," "Agent of Hell," etc., only inspired the greater boldness in the faith, and a determined spirit to become entirely devoted to the truth which he had so joyfully learned. Hence, he immediately turned his thoughts and purposes to a life in the Gospel ministry.

Shortly after his baptism, his elder brother, Samuel Rogers, who was also his guardian, and who had recently removed from Kentucky to Clinton County, Ohio, made a return visit to Kentucky. During this visit it was determined by the brothers, the Messrs. Batterton consenting, that the indentures of John should be purchased for one hundred and fifty dollars, which being done, left him but fifty dollars with which to commence the world. It was decided that he should accompany his brother Samuel on his return to Ohio; and, borrowing a horse from his mother, they set out, in the most primitive style, on their journey, in February or March, 1819. His first attempt at public speaking was during this journey, at Kentontown, Harrison County, Ky. Shortly after his arrival in Ohio, he commenced working at his trade, with one Daniel Radcliffe, in Wilmington, Clinton County, in the vicinity of his brother's home. He continued this employment until he had earned sufficient to enable him to make a respectable appearance before the public.

Early in the summer of the same year he made his first missionary tour, traveling on foot, in company with his brother Samuel, and others whom they met on the journey. Toward the close of the summer, the brethren raised for him about sixteen dollars, with which, and the fifty dollars he possessed, he purchased a horse. He then returned to Wilmington, and again went to work for Mr. Radcliffe, to get the means to procure a saddle and outfit for the horse, which, being soon accomplished, he started out on his second tour, preaching through the western counties of Ohio, and in Wayne County, Ind. On the 28th of September, 1819, he was regularly licensed to preach the Gospel, by the conference of Christian Churches in Warren County, Ohio, Elder Samuel Kyle, the clerk, writing the document, which is still in possession of our subject. During the same fall he spent some time with the venerable David Purviance, who then lived in Preble County, Ohio, and went on a preaching tour with him in Kentucky, to visit his old friends.

During the winter of 1819-20 he employed his time in attending school in Georgetown, Ky., under the tuition of Barton W. Stone. In April, he quit school, and devoted himself more entirely to preaching the Word. At this time, April 18, 1820, he, in company with others, was regularly set apart to the work of the ministry, by prayer, and the imposition of the hands of the elders, at Minerva, Mason County, Ky. His certificate bears the signature of B. W. Stone, in behalf of the elders officiating. He immediately came into the neighborhood of Carlisle, Ky., where he has resided ever since. John Rogers became acquainted with Alexander Campbell, shortly after his debate with W. L. McCalla, at Washington, Ky., in 1823. On the 6th of December, 1824, Mr. Campbell preached in the Court House in Carlisle, on which occasion he purchased the first three numbers of the "Christian Baptist," and subscribed for it for the future, and, in his own language, " has read all that he has written from that day to this," and is still a subscriber to the "Millennial Harbinger." At the time just referred to, he had not " learned the true design of Baptism—the necessity for weekly communion—the distinction between faith and opinion—and the true basis of union upon the great and all-comprehensive proposition, that Jesus is the Christ the Son of God." Though he had been associated with those who were contending for Christian union, and in opposition to all human creeds, in which the ground had been common between the associates of brethren Campbell and Stone, yet he had not arrived at a full appreciation of these matters, until, under God, the powerful mind of Mr. Campbell brought them clearly before his view, in the " Christian Baptist." To use his own language, therefore, we may say, he " cordially embraced the views of the Reformation about the year 1831."

In 1825, in company with his brother Samuel, he made a long preaching tour through Ohio, Indiana, Illinois, and Missouri, spending most of the time in Missouri, and extending the tour as far as Lexington, which was then just being settled. In 1827, they made another extensive tour into Virginia, embracing also parts of Maryland and Pennsylvania.

After the union in 1832, as before stated, John Smith and John Rogers were associated as evangelists, to represent the parties respectively, to travel and promote the union, and preach the Gospel. They continued their united labors during the years 1832-33 and 1834. During these years many thousands were added to the congregations all over the West. The union gave a mighty impetus to the cause.

As a preacher of the Gospel, the subject of our sketch must be regarded as one of our most successful men. Not less than four thousand persons have submitted to the ordinance of baptism at his hands, and about twelve hundred of these have been within the bounds of the congregation where he has resided for the past forty-three years.

He has also been a frequent contributor to our periodicals for many years, and has published some other works, among the more prominent of which are the biographies of the distinguished evangelists B. W. Stone and John T. Johnson ; the former, published in 1847, and the latter, in 1860. Let the memories of such a man, and of such successes under God, inspire in the hearts of his brethren the affection and respect due to his declining years. 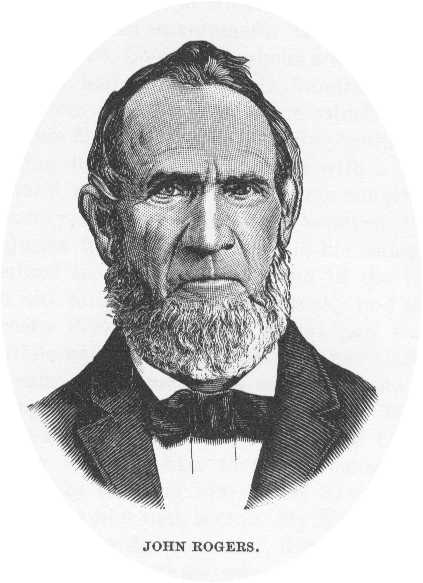 Another Biographical Sketch On The Life Of John Rogers

Directions To The Grave Of John Rogers

Heading northeast out of Lexington, Kentucky on Hwy. 68, past Paris, you will come to Carlisle. Turn right on Hwy. 36 and back to the left on Hwy 32. Just before you enter the downtown area you will see the cemetery to your left. Turn left into the cemetery, and as you near the top of the hill you will begin seeing graves. Pull to the left and stop the car. The grave is just on the left, one of the first graves you come to in the cemetery.

Before you leave Carlisle. Travel on into the city square and see the Christian church where John Rogers preached. Also traveling out of the square to the north you will see a Historical Marker showing directions toward Old Concord Church. The graveyard is still there, but the building was destroyed in a tornado in the 1960s. 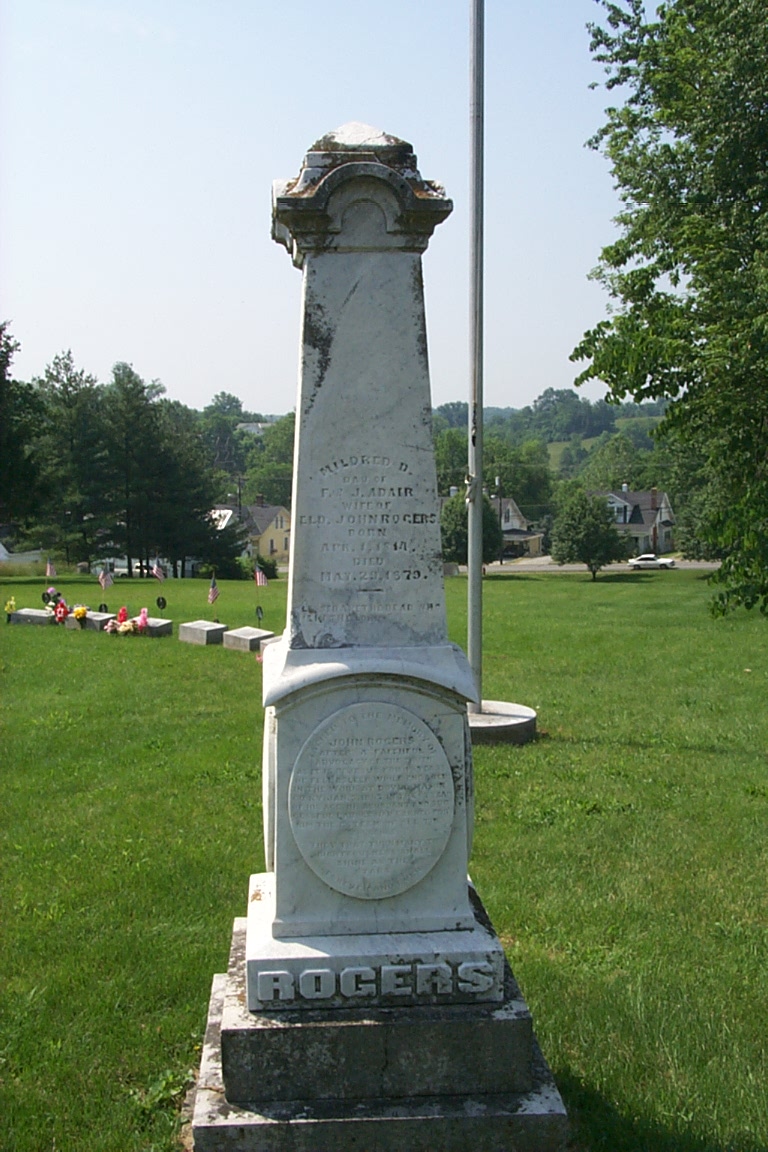 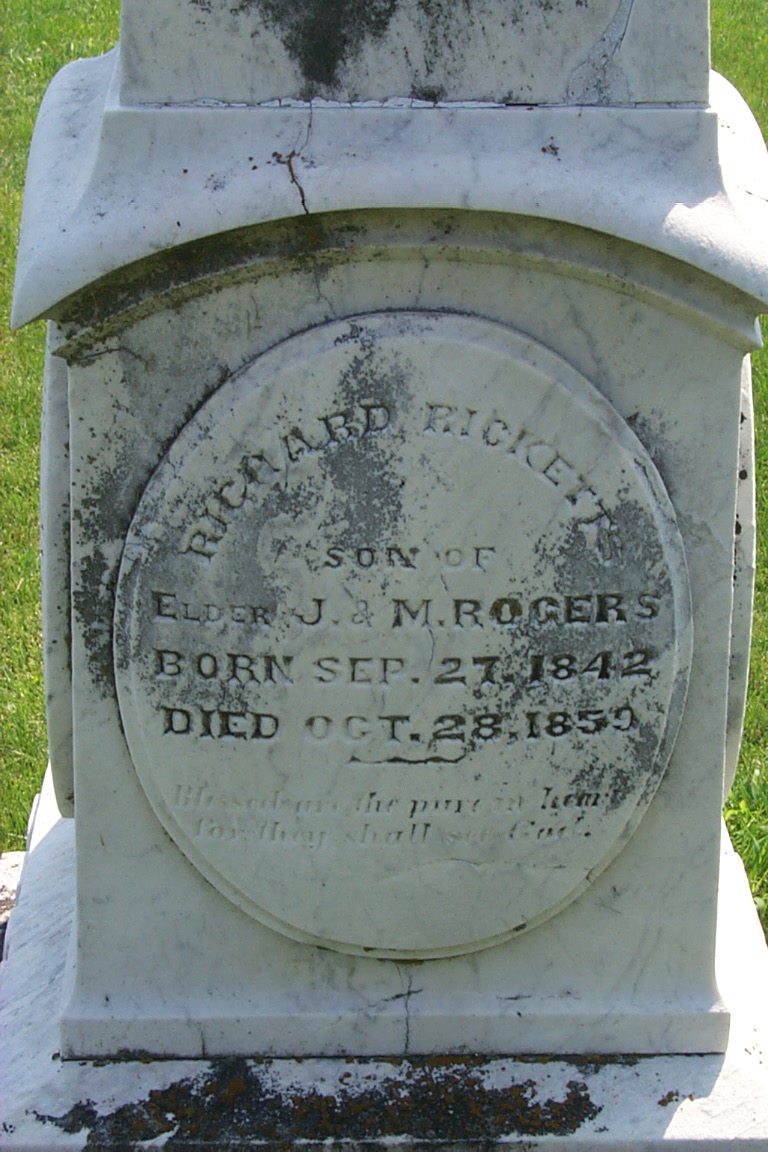 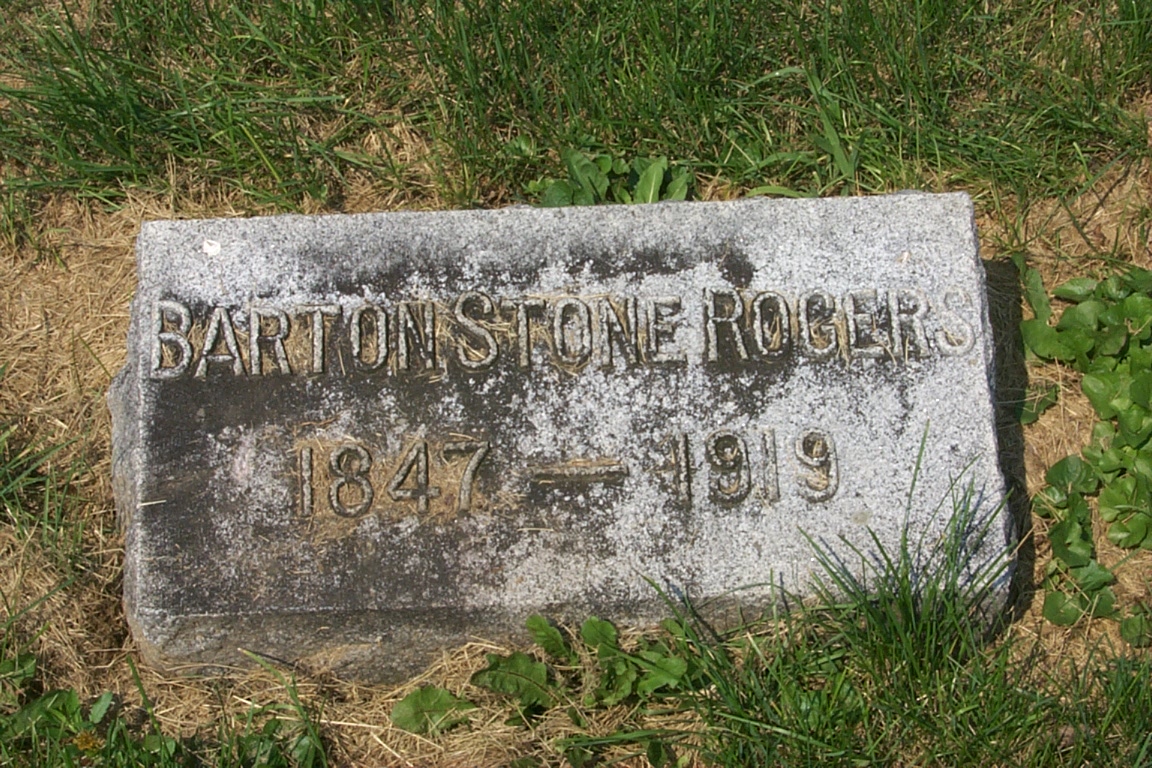 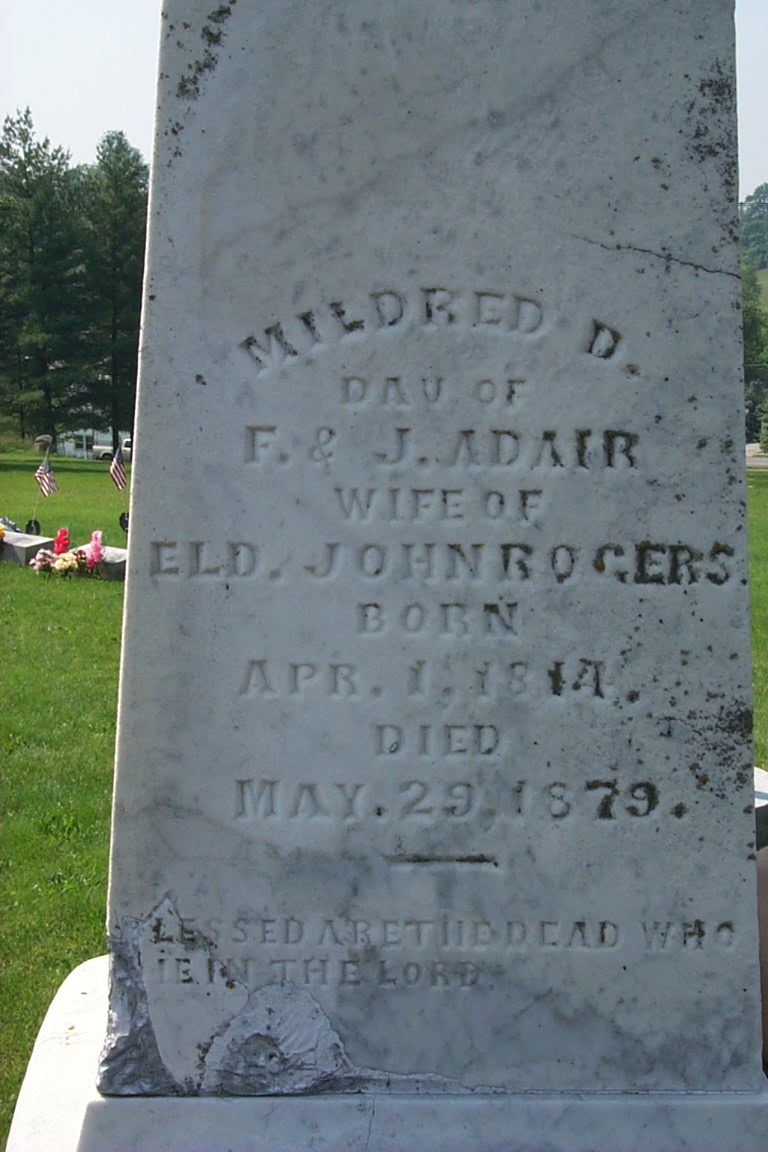 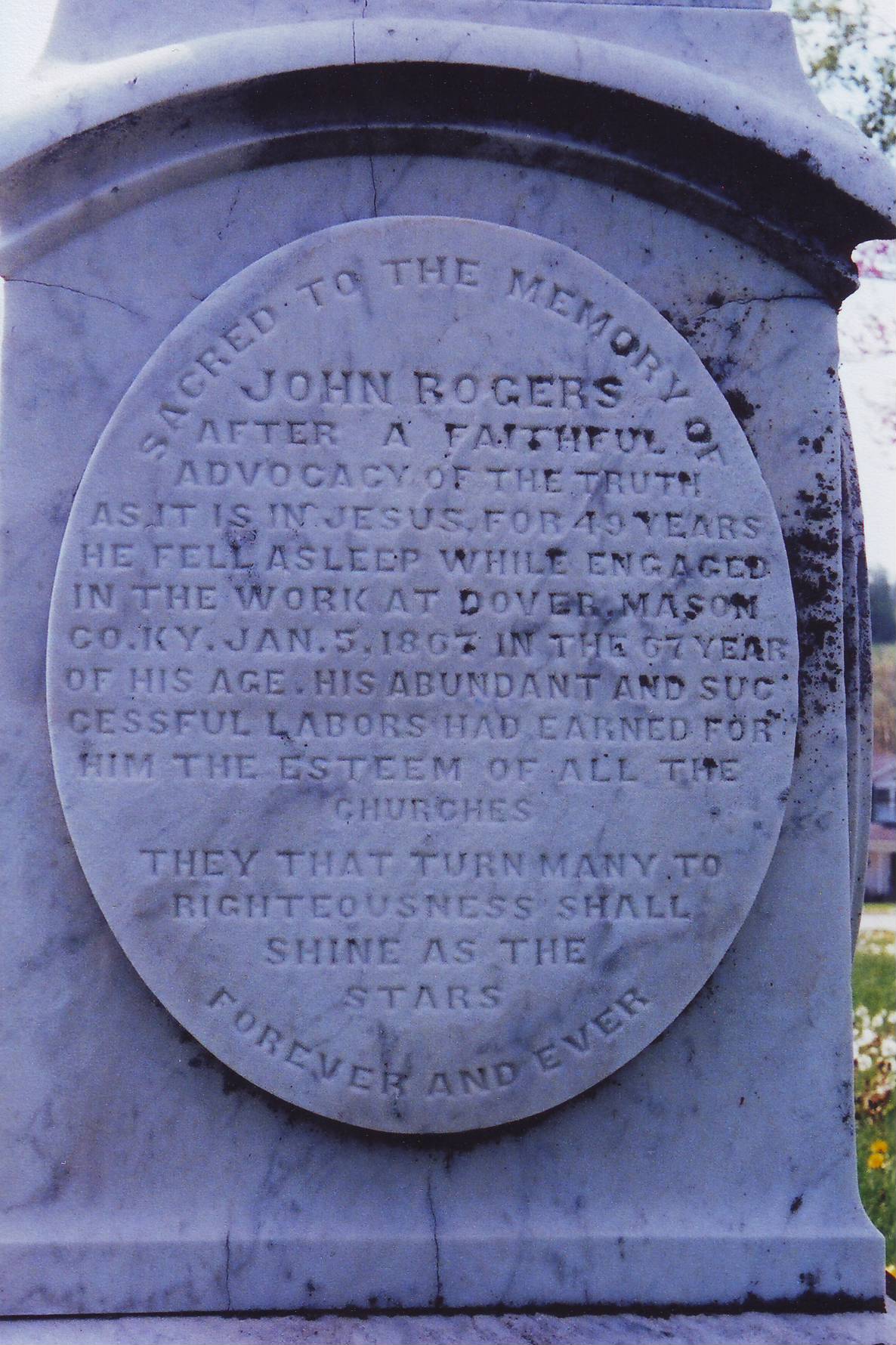 Sacred to the memory of
John Rogers
After A Faithful
Advocacy of the truth as
it is in Jesus for 49 years.
He fell asleep while engaged
In the work at Dover, Mason
Co, KY, Jan. 5, 1867 in the 67 year
Of his age. His abundant and Suc-
cessful labors had earned for
him the esteem of all the
Churches
They that turn many to
righteousness shall
shine as the stars
forever & ever