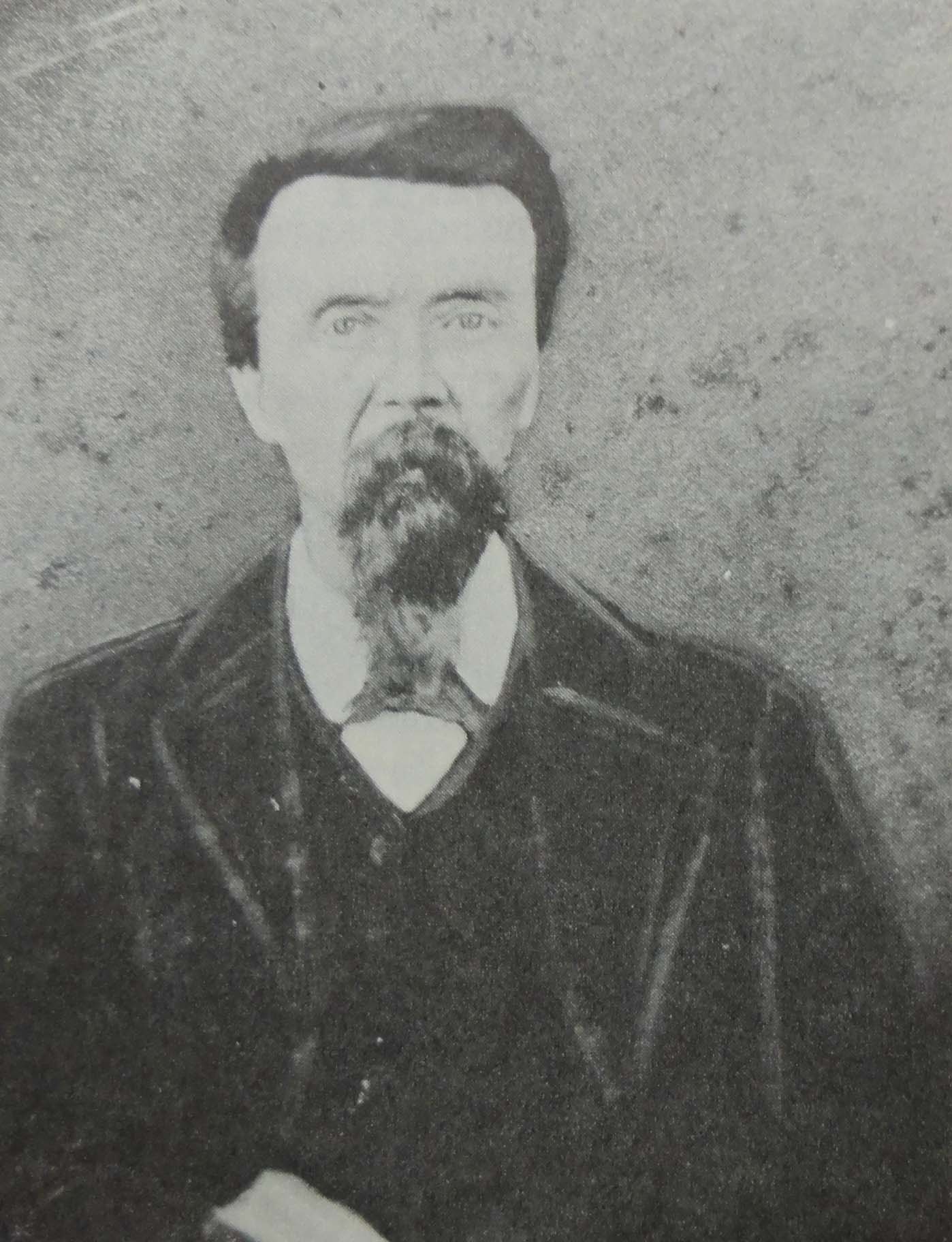 James W. Williams was born in 1840, the son of Miles Williams and Barbara Watson. He lived in a log house on Sulphur Creek or Williams Creek as it is now known. James had one brother, Richard "Uncle Dick," who lived with him. Richard was a shoe cobbler by trade. James had several half-brothers and sisters, Polly, Eunice, Rachel, Vince, Joseph, and M.A. James married Emily Keen, the daughter of Francis Keen and Elizabeth Clark Keen. James and Emily had 5 children: Richard Elias b.1864, married Ruthie Jane Kirby; Miles Francis b-1866, married Vela Murphy Hogan; Ambrose Crittenden 5-1867, married Lula French; James b-1869, died young; George Washington b-1871, married Imogene Coop.

James W. was a Church of Christ preacher, teacher, magistrate and a very much respected man in the community. The following article appeared in The Herald, a Burkesville newspaper, in Oct. 27, 1892.

Having occasion to spend a few days in this section, I will give a few lines here. I am staying with Rev. James Williams, a clever man and a good host, one whom for several years on account of a certain circumstances involving myself, I have held in grateful and affectionate remembrance. He is a good man, one who comes into the congregation, who are called the salt of the earth.

This is geographically a rough section of Cumberland County, and there is a section skirting the headwaters of Kettle, Judio, Galloway and Sulphur Creeks, called Pea Ridge and Red Banks that is pretty tough all around. There are some good citizens within its borders, a good many turbulent ones and a few who have obtained the reputation of desperadoes. Near Peytonsburg an encounter happened between a lot of Federals and Confederates. The Confederates were hard pressed, two of them broke off from the main body and attempted to escape, but being closely persuaded and fired upon they were both hit, one being killed instantly, the other a young man by the name of Sevier was mortally wounded. On the approach of his pursuers he begged for his life, telling them he had already received a death wound, but one of them inspire of his entreaties rand up and japed his pistol in Sevier's mouth and firing it, killed him. The man is living on Marrowbone today.

The soil here is poor, plenty of fine oak, chestnut and hickory are to be found. On the farm of the gentleman (James W. Williams), with whom I am staying is to be found one of the finest if not the best Sulphur Springs in this county. It seems to be a combination of red, black and white sulphur, cold and clean, and no doubt if the owner would take the trouble to build some comfortable quarters for guests near it and advert this sulphur spring it would become popular.

James W. died Aug. 3, 1897, Emily died June 3, 1903, they are buried at Christians Chapel Cemetery. They only have chimney rocks marking their graves.

This article appeared in The Burkesville Banner, a weekly newspaper published in the early 1900's. The article was written Jan. 27, 1911, by Leo Lee.

When Leo Lee was a boy in his small teens, he went often o hear the sermons of two eloquent preachers. Their names were Robert Kirby and James W. Williams. They were neighbors, friends and co-workers and Leo Lee had not doubt then that they were the smartest and greatest men in the world. They were heroes and although more than a score of years has passed since that time and one of them is now numbered with the silent dead, their pictures side by side are still hanging on memories walls, where they will hand until effaced by death itself. These are the impressions of early youth and although Leo Lee has since reached mature age and has had opportunity to listen to sermons of divine, said to be more scholarly, still his opinion is but slightly changed if at all, and the heroes of his boyhood are the heroes of his manhood.

Elder Robert Kirby possesses a personal magnetism and individuality all his own, and is of an invincible disposition. He is a born genius and natural orator, and while his scholastic education is limited, he nevertheless possesses a full store of information and is what might be truly called a self-educated man. He is a self-made man in the fullest sense. He possesses a good command of language and is adaptable and versatile. He is a fluent and eloquent talker both in the pulpit and in private conversations. He is still in the prime of manhood and intellectuality, there being no perceptible difference between the Kirby of today and of a score of years ago. To Leo Lee he seems the same, just as young, just as good, wearing the same bewitching smile that is one of his chief characteristics.

Elder Robert Kirby has preached in several different states of he Union, having been called several times to far-away Texas. He has preached in almost every neighborhood in southern Kentucky and northern Tennessee, where his conversions number hight up in the thousands. The good he has done cannot be estimated and will live a thousand years after he has gone. He is a born debater and has plucked the feathers from many a contestant.

Here's wishing that the days of Robert Kirby on earth may be many and the good work, in which he is engaged, long continue.

Seeing the deplorable conditions of our country in regard to Intermperance and great incineration among our young men, and even beardless boys to become inebriates, I am constrained to offer a few thoughts through the Herald to the good people of our county, on the evil tendencies of immoderate dram drinking and finally its direful consequences, that by your combined influence, we may be able to crush the monster from our once happy county. You may hear the cry of, Temperance, Temperance! among the people. What is Temperance? Is it immoderate dram drinking? No, Temperance is an indulgence in all things good and useful. The Bible teaches total abstinence from all things mean and sinful. Such as lying, drunkenness, theft, murder and such like. God pronounced a curse against the man who puts the bottle to his neighbor's lips to make him drunk. See Heb. 2-15.

Whiskey is an enemy to every thing that is dearest and valued in that sacred place. Then friends of home, liberty and Christianity will you help crush it out? Shame, everlasting shame be upon any man or set of men that would in any way raise their puny arms against God and all good men, in support of a thing that is such a damnable crime to society as the liquor traffic. They cry Liberty, Liberty? Such liberty as this tends to rob the poor man of his hard earnings, ruin his good reputation, destroy his peace at home with his family, blight his fondest hopes, full our county with drunkards, our prisons with criminals and murderers, make widows and paupers of their wives, orphans of their children and finally, send their souls to eternal punishment. This is poor liberty indeed! Where whiskey has saved one life it has destroyed hundreds, and still the worst of all, Church members will engage in manufacturing this terrible brew. If so, friend reform. What has been your experience since you took your first glass? Association with all the black crimes that ever blackened the pages of the history of a civilized nation Remember reader, that experience is a dear school and that your tuition is the same, cost hight. Young man, never take the first drink! One drink is not much, yet there may be a poison adder at the bottom of that cup that may ruin you forever. The little snowflake upon the mountain top is so small at first that it is almost unperceptible, but an accumulation of these little flakes will defy the power of an engine. If we license men to sell whiskey then we are at least indirectly responsible for the traffic and the heinous consequences. Whiskey dealers, a word to you, are you ready to administer to the want of the fatherless and widows who you have caused to shed many bitter tears? You have dealer out destruction and ruin to father and husband. We have not written these articles to provoke anyone to anger, but to make it possible to start a reformation among the young men and boys of our country.

Directions To The Grave of J.W. Williams

The Christian Chapel Cemetery in southern Kentucky's Cumberland County, is remotely located to say the least. It is not close to any highway in the national Interstate System. The closest Interstate is I-40 in eastern Tennessee. Just east of Cookeville, take exit 288, Hwy. 111, and head north. Go through Livingston and head west / northwest on Hwy. 52 toward Celina. In Celina take the Burkesville highway, Hwy 53, north. Crossing over into Kentucky, it will become Hwy. 61. Continue heading north a few miles and turn right on State Hwy. 485. / or Post Office Rd. It will dead end into Sulphur Creek Rd. Turn right on Sulpher Creek Rd./State Hwy. 485, and go less than a mile and turn right on Christian Chapel Road. The cemetery will be on your left. The Williams plot will be toward the back of the cemetery, nearest the woods, though you can drive around and come up close to it at the back. See GPS below. 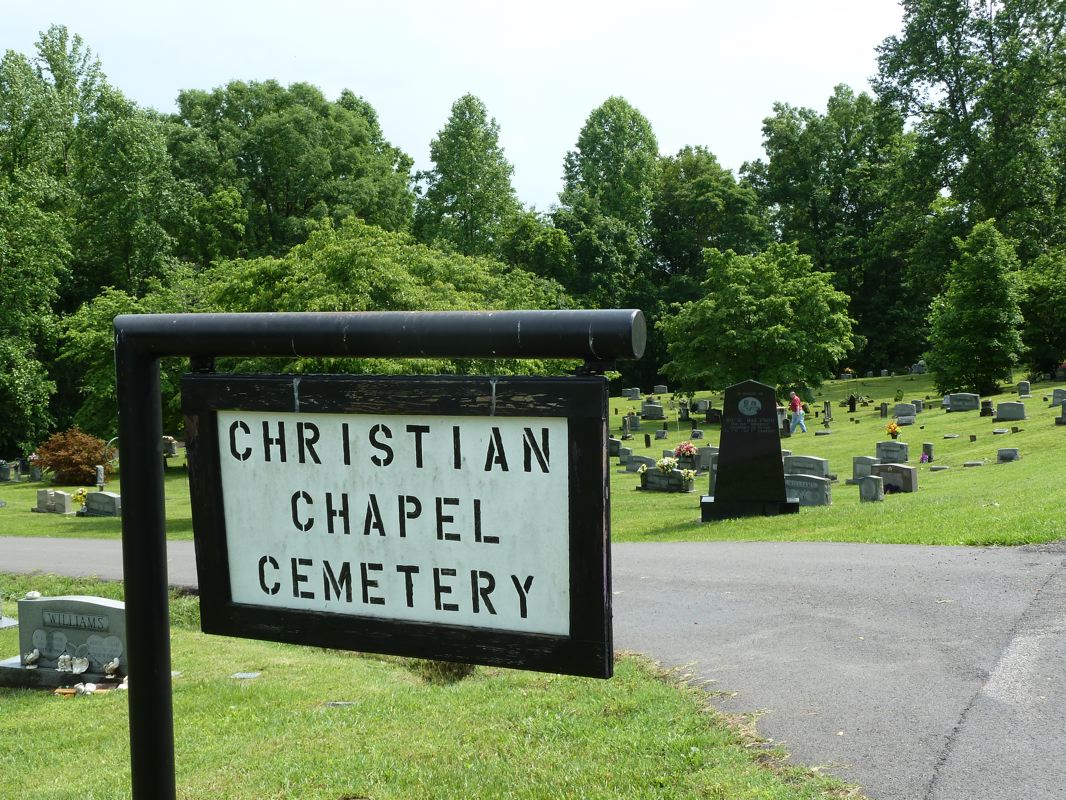 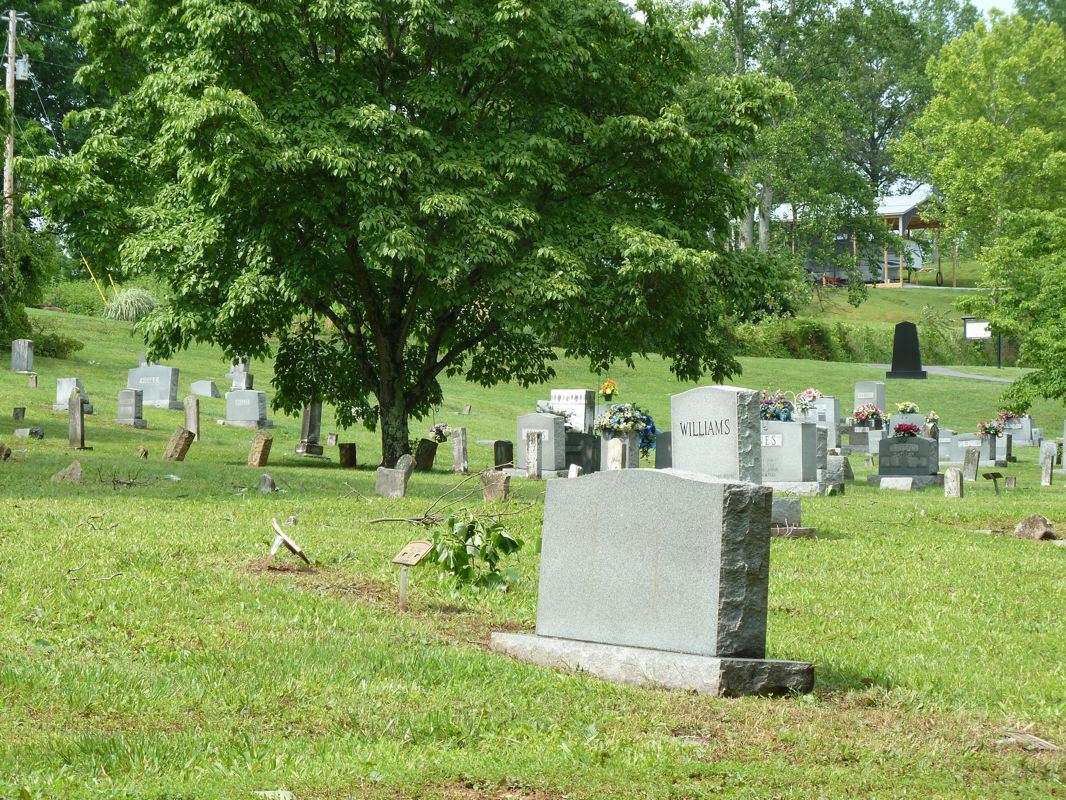 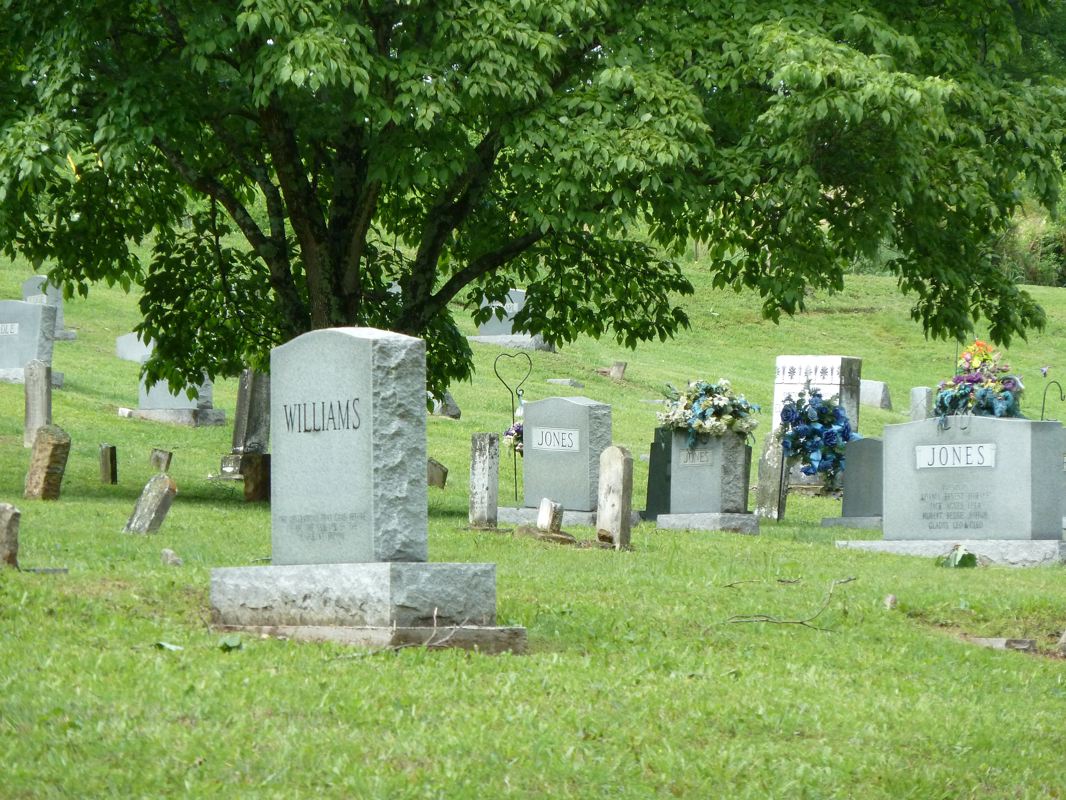 Williams plot in foreground. Kirby plot in the distance 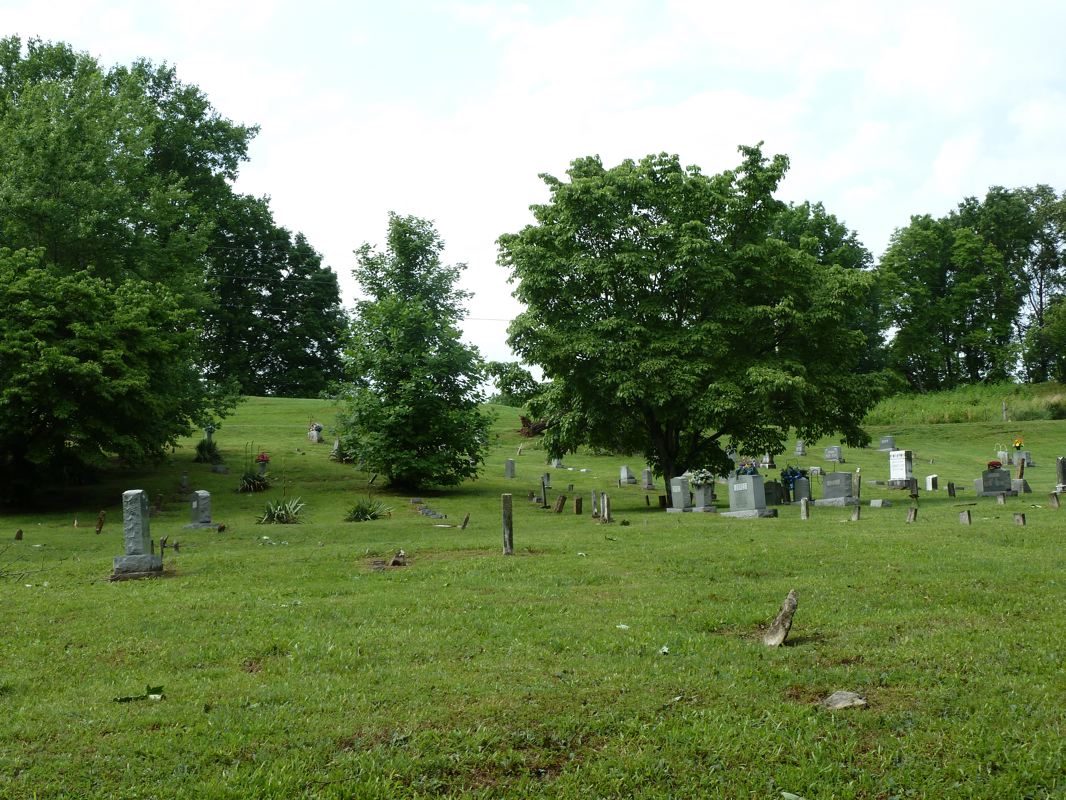 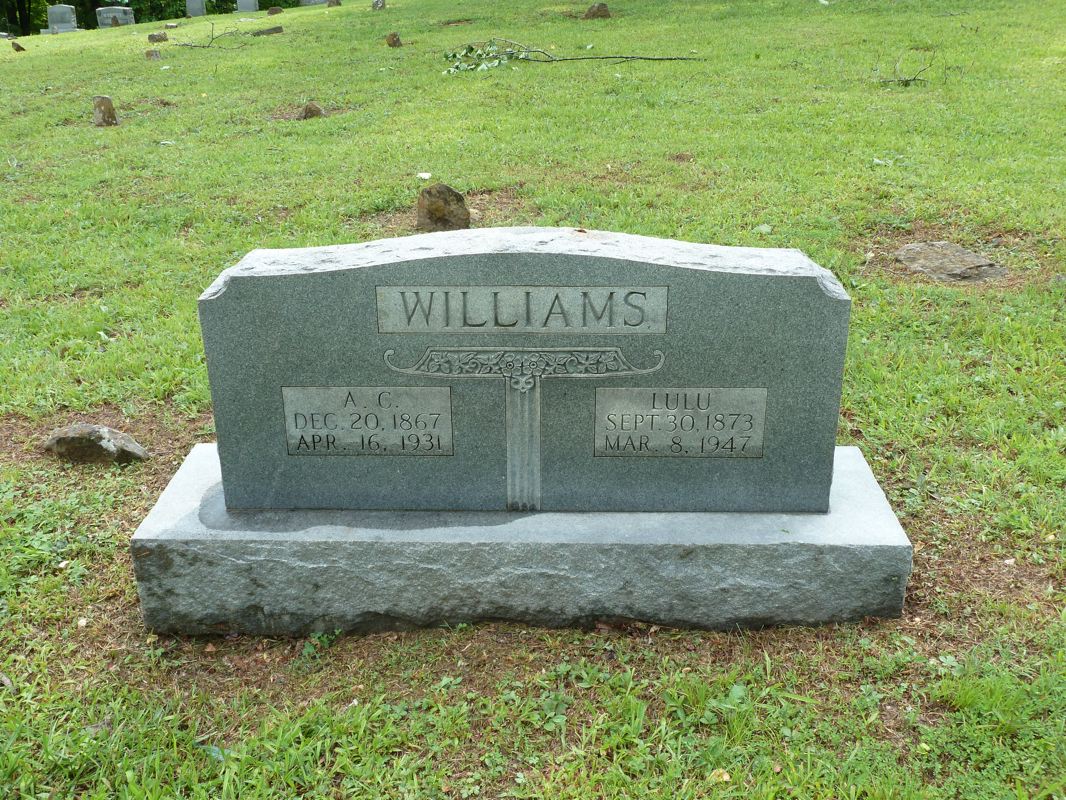 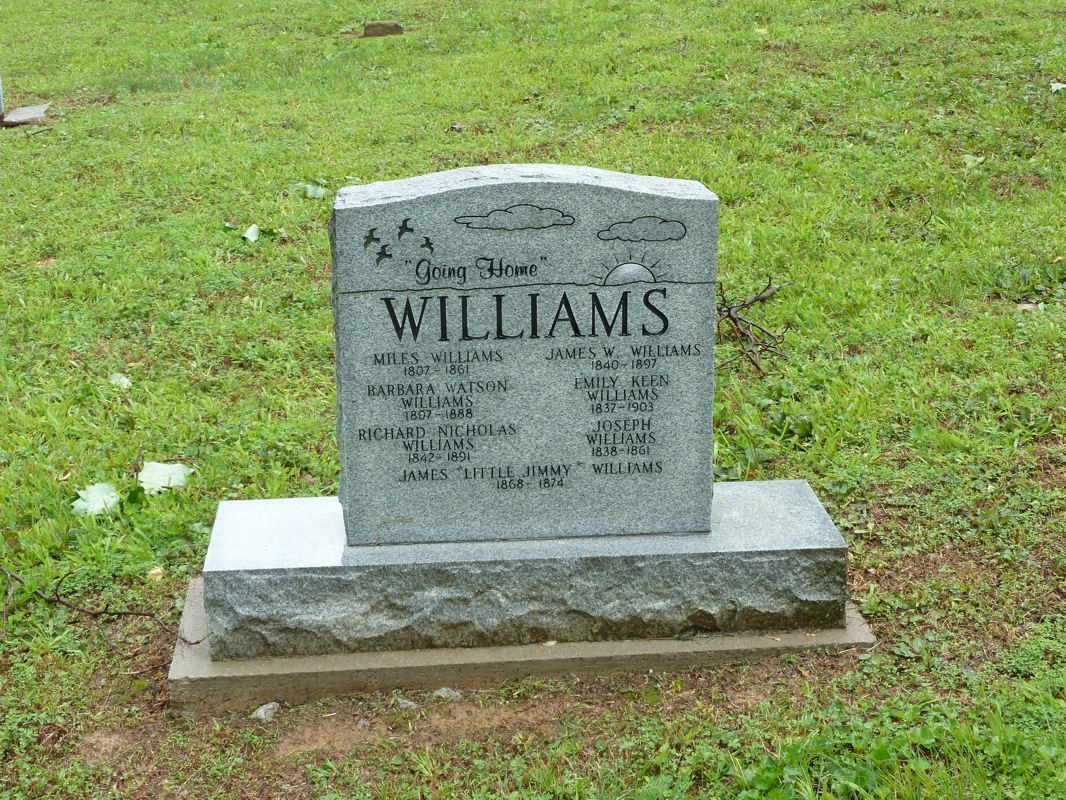 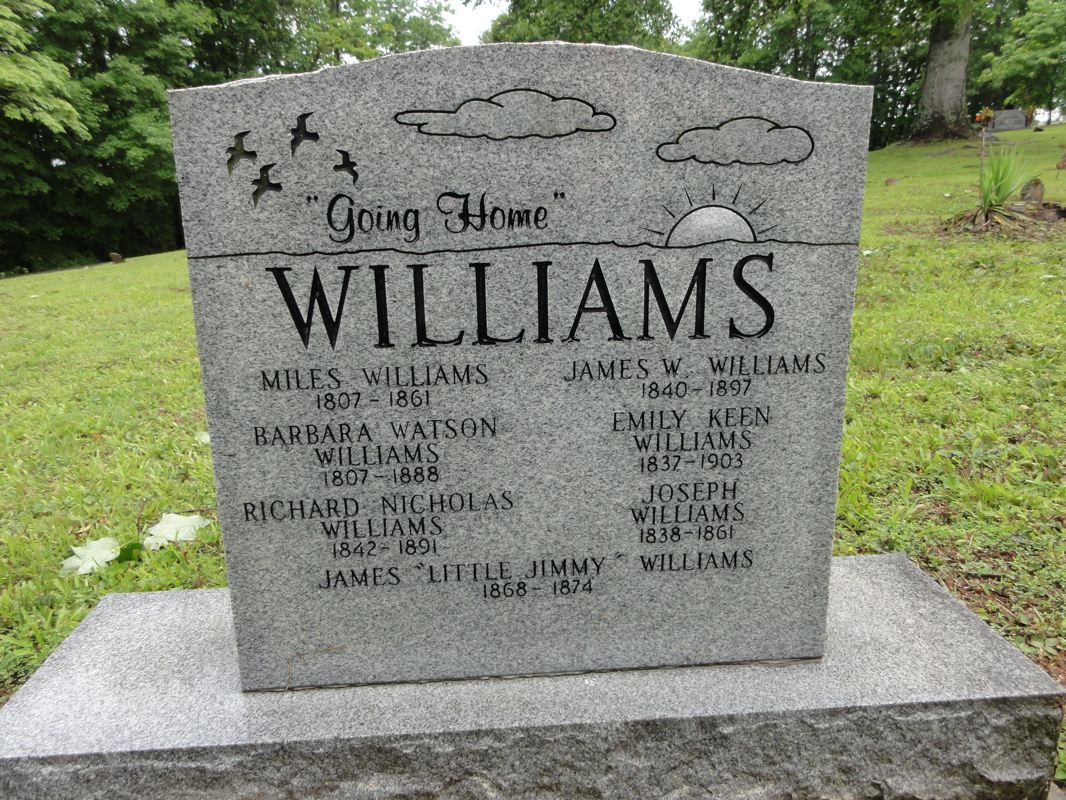 Special Thanks to Tom L. Childers and C. Wayne Kilpatrick for assisting in the locating of the grave of James W. Williams. In May, 2011, these men traveled with your web editor to search for graves in Kentucky. This grave was not on the list, but was discovered during our research.