Biographical Sketch On The Life Of T. M. Allen

In the early days of the Restoration Movement many espoused the cause of the New Testament church from all ranks of life. There were those who were in poverty, yet honest and sincere, who took up the cause and proclaimed the gospel successfully to those in that rank of life; again, many among the wealthy were found who were willing to sacrifice and help proclaim "the ancient order of the gospel." Thomas M. Allen came from among the prominent and wealthy.

He was born in Shenandoah County, Virginia, on the Shenandoah River, October 21, 1797. Little is known of his parents; neither do we find any record about his education. However, his after life shows that he was a well educated man. His parents were Presbyterians, and he espoused the cause of the Presbyterian Church early in life. When he was a young man, he happened to an accident while riding horseback which left him a crippled arm and hand for life. In company with a young lady on a short journey, a storm suddenly arose, and they took shelter under a tree. Lightning struck a tree near the two and shattered the tree, killing the young lady instantly and killing the horse on which young Allen was riding. He studied law and moved from Virginia to Kentucky, intending to practice his chosen profession. For some reason he first located in Indiana and opened an office and began the practice of law. Later he came to Kentucky. Soon after he came to Kentucky he became interested in the subject of religion. He had served in the War of 1812 and had lost his youthful interest in the subject of religion. He heard Barton W. Stone preach, and he became interested at once. He was baptized in May, 1823, by Barton W. Stone. He at once began to speak publicly on the subject of religion. At that time those who had left the Presbyterian Church and were preaching independently were called "New Lights."

He was associated in his early days as a preacher with Barton W. Stone, F. R. Palmer, and Joel H. Haden. These had not come into the fullness of the knowledge of simple gospel truth, but were still confused with different phases of denominationalism. However, it was not long until they emerged from the fog and confusion of denominational error and came into the fullness of gospel light. Thomas M. Allen preached the gospel in his own county and adjoining counties. He preached much in Bourbon County, Kentucky, and established many congregations in that county. He wrote in his journal at the close of the year 1827 the following: "During the year 1827 I married eight couples; baptized fifty-one persons; planted two churches—one at Antioch, Bourbon County, and the other at Cynthiana, Harrison County, both having increased considerably and at this time are in a very flourishing condition." In 1830 he says: "I attended the Baptist Association at Silas on the fifteenth of August and saw the association exert their lawless and unauthorized power over all usage, constitution, precedent, or rule in the exclusion of Brethren J. Creath, Sr., and J. Creath, Jr., and the churches to which they respectfully belong, simply because of their opposition to all human creeds and their views on gospel liberty. The conduct of the orthodox part of this association convinced me that they were actuated by the same spirit that in former days planted the stake and lighted the fagot." He heard Alexander Campbell preach on November 15, 1830, for the first time. He continued his labors with abundant success as an evangelist in Kentucky. He established churches at Paris. Clintonville, and Bryant Station.

In 1836 he moved from Fayette County, Kentucky, to Boone County, Missouri. There he located on the "Two-Mile Prairie." He entered the field at once as an evangelist and traveled much in preaching the gospel. Perhaps no other man in the State of Missouri ever did as much traveling on horseback and preaching the gospel as did Thomas M. Allen. In private houses, in barns, in open groves, in courthouses, in the Hall of Representatives at Jefferson City, and in nearly all the meetinghouses of his section of the State was the voice of Thomas M. Allen heard pleading for the truth and the union of God's people by returning to the apostolic doctrine and practice. No man did more to spread the cause of Christ in the State of Missouri than did Thomas M. Allen. His labors were not confined to the State of Missouri. He visited time and again the State of Kentucky and strengthened the churches that he had established in that State and helped to establish others. He labored energetically and successfully as an evangelist in many parts of our country. In 1860 we find a report in the Gospel Advocate of that year of his work in Tennessee. In the August issue of the Gospel Advocate of 1860 we find this report:

"Brother Thomas M. Allen, of Missouri, labored several weeks, in the early part of the summer, in Rutherford County, Tennessee, with good success. He has long been earnestly engaged in pleading the cause of the Master and is one of our most respected evangelists."

Brother Allen's going to Missouri was an epoch in the history of the few struggling churches in that State. He threw all the power of his life into his work and saw happy results from his labors. He was a man about six feet in height and weighed about one hundred and eighty pounds. He had a most commanding personality and a clear, strong voice. He could endure more than the ordinary man, and rejoiced that he had so much strength that he could dedicate to the preaching of the gospel and establishing churches. Through his influence Alexander Campbell visited Missouri and strengthened the churches. Brother Allen wrote frequently to the Millennial Harbinger. He reported his meetings and those of his brethren in that paper. Brother Allen never aspired to any office, but he always felt and frequently manifested a deep interest in the political welfare of his State. He was frequently urged by his party friends of the old Whig party to become a candidate for Governor of the State, but he refused to let his name be used for this purpose. Once he declined an appointments to Congress to fill an unexpired term, on the ground that it might impair his influence as a minister of the gospel and would be setting a bad example to the young preachers.

Brother Allen was a successful business man. He was what would be called a "wealthy man." He contributed liberally of his means to the endowment fund of Bethany College. His interest in that college grew out of his desire to see the churches supplied with an educated ministry. He was a friend of education and was one of the earliest and truest friends of Missouri University, located at Columbia. He was honored a number of times by being elected president of the board of directors. While he was a slave owner, yet he had great sympathy for his servants and treated them as part of his own family. Many of his slaves remained in his employ after they were freed, and all of them continued to be the objects of his care.

Brother Allen continued his active service as a preacher of the gospel until the fall of 1871. He served as a faithful preacher of the gospel for more than fifty years. He died on October 10, 1871, in Columbia, Mo. Funeral services were held by Joseph K. Rogers, president of Missouri University. His funeral was attended by one of the largest crowds ever seen in Columbia. The doors of the business houses were closed during the exercises. He had done justice, loved mercy, and had walked humbly with God, and was finally called where "the wicked cease from troubling and the weary are at rest."
—H. Leo Boles, Gospel Preachers Of Yesteryear, c.1932, GA, pages 81-85


Painting By W.S. Rogers, Hanging In The Halls Of
Christian College, Columbia, Missouri.
—Special Thanks To Alvin R. Jennings, Biographer Of
T.M. Allen: Pioneer Preacher Of Kentucky & Missouri,
For Sending A Photo Of The Painting Taken In 1951

Directions To The Grave Of T.M. Allen

Thomas Miller Allen is buried in Columbia, Missouri in the Columbia Cemetery. If traveling on I-70 in Missouri take exit 126 in Columbia, North Providence Rd. (State Hwy. 163) and go south. Cross Nebraska Avenue and Business Loop 70. Stay on Providence Rd until you get to E. Broadway and turn right. Begin looking to the left for the entrance to the Columbia Cemetery. Enter main entrance. Go down drive toward the middle of the cemetery. Begin looking to the right. Cross Rollins Rd. and it will be down on the right. If you get to Garth Rd. you have gone too far. Section is on the west side of the road. Also in this section is the grave of another RM preacher, James Shannon. He is in front and to the left of the Allen plot. GPS Coordinates for the grave of T.M. Allen: 38°56'58.6"N 92°20'15.6"W / or D.d. 38.949599, -92.337664 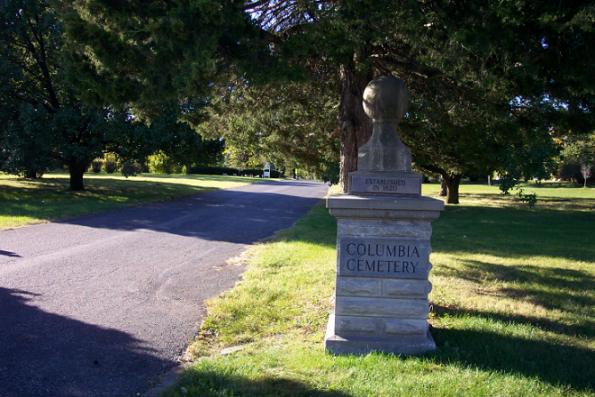 
The B/W Photo Above Was Taken In 1951 By Alvin R. Jennings. Compare It To The
Color Pictures Above Taken In 2004. Note The Effect Of The Elements In Just 53 Years