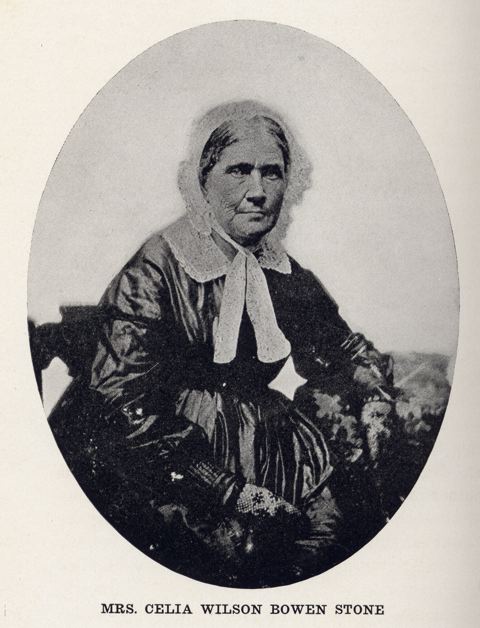 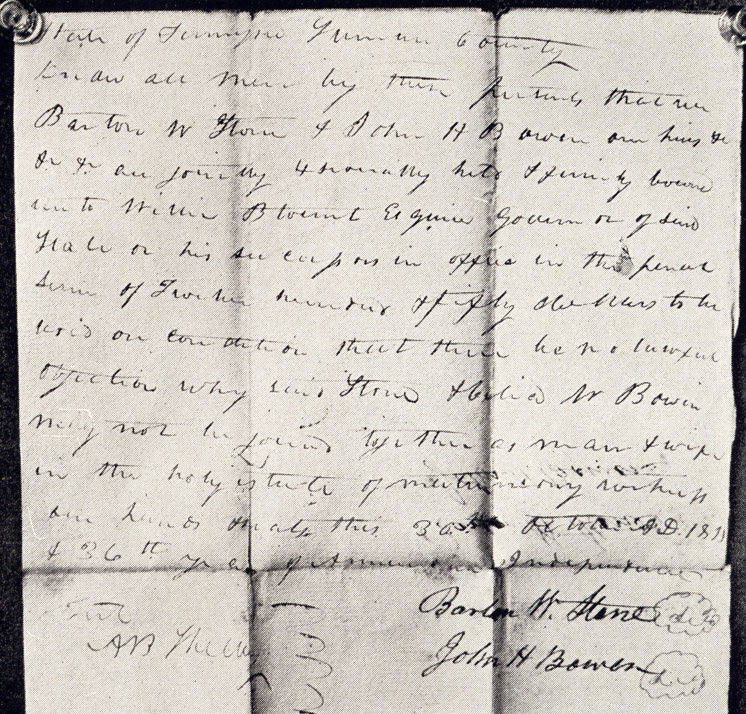 The name Barton W. Stone is synonymous to work of the early years of the Restoration Movement in North America. The wife of his youth Elizabeth Campbell Stone, passed from this life May 30, 1810, a little lest than nine years after marrying. In those short years shegave birth to four children. One of Eliza's cousins, eight years her junior, was Celia Wilson Bowen. She was the youngest daughter of Captain William Bowen (1742-1804) of Mansker's Creek, near Gallatin, Tennessee. Barton married Celia Stone, October 31, 1811. To them were born four sons and two daughters (William Bowen, John Henley, Mary Russell (Poly), Barton Warren, Catherine L. & Samuel Matthew).

She remain concort and promoter of her beloved husband throughout the remaining days of his life. When Barton W. Stone died November 9, 1844, he and Celia were visiting in the home of their daughter, Amanda Bowen, in Hannibal, Missouri. The body was returned and temporarily buried on the property owned by the Stones in Jacksonville, Illinois. When Celia decided to sell the property, the body of her husband was exhumed and buried at the old Antioch church cemetery about seven miles distance. In the spring of 1847, the grave was again moved to its present location at Cane Ridge Meeting House near Paris, Kentucky.

After the sale of the Jacksonville property, Celia moved to Hannibal, Missouri and lived out her remaining years in that town. She passed from this life Thursday, April 23, 1857. At the time most people were buried in the relatively new Baptist Cemetery on a hill just north of downtown Hannibal. She was buried in this grave yard.

During a June, 2009 trip through northern Missouri, Illinois and Indiana, C. Wayne Kilpatrick, Tom L. Childers and Scott Harp visited the old cemetery. As over 150 years had passed since Celia Stone's departure, the cemetery was in a terrible state of disrepair. Many of the stones in the park had been vandalized or removed. It was a real concern as to whether the location would be able to be found. However the grave was located. Someone had placed a little wooden cross at the head. Gone, but not forgotten! It was cleaned up, and chalked to bring out the best definition. The photos are below. If you ever visit the town of Hannibal, do not forget that though the area is best remembered as being the boyhood home of Samuel Clemens, it was also the home of Celia Stone for nearly thirteen years.

Directions To The Grave of Celia Wilson Bowen Stone

Celia Stone is buried in Old Baptist Cemetery in Hannibal, Missouri. From I-72, (Mark Twain Avenue, Hwy. 36,) take exit 157 and head toward downtown Hwy. 79 (Harrison Hill Rd.). Take the first left on Hayward Street. Then take the first right on Fairview Street. It will dead-end into Ann St. Go up the hill on Ann Street to the entrance of the cemetery. Heading up the hill into the cemetery, go until it nearly levels off at the top and be looking to your left. It should be close right next to the drive. You will need to get out and look as the marker has been laying on its back for many years. 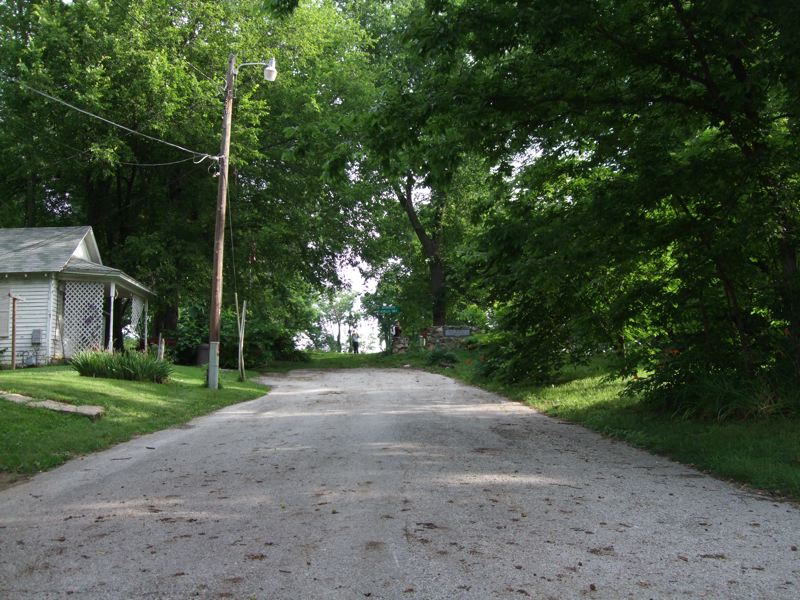 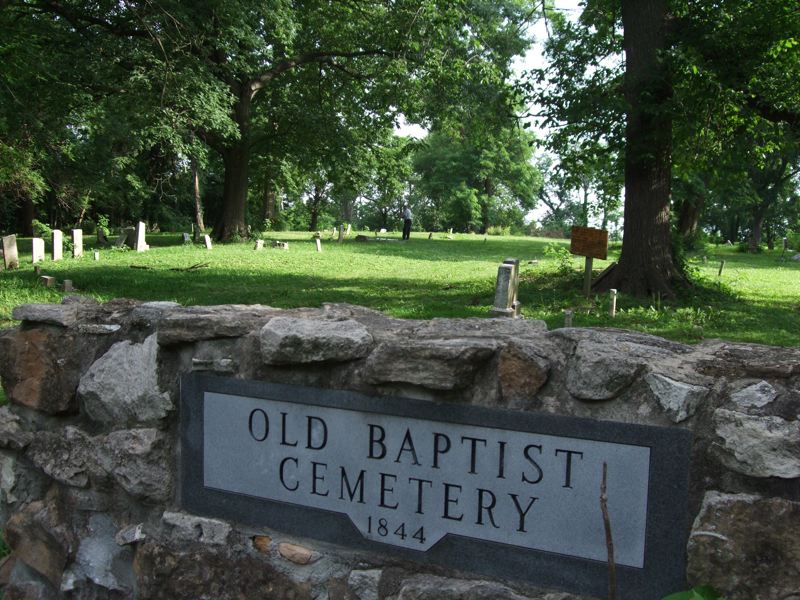 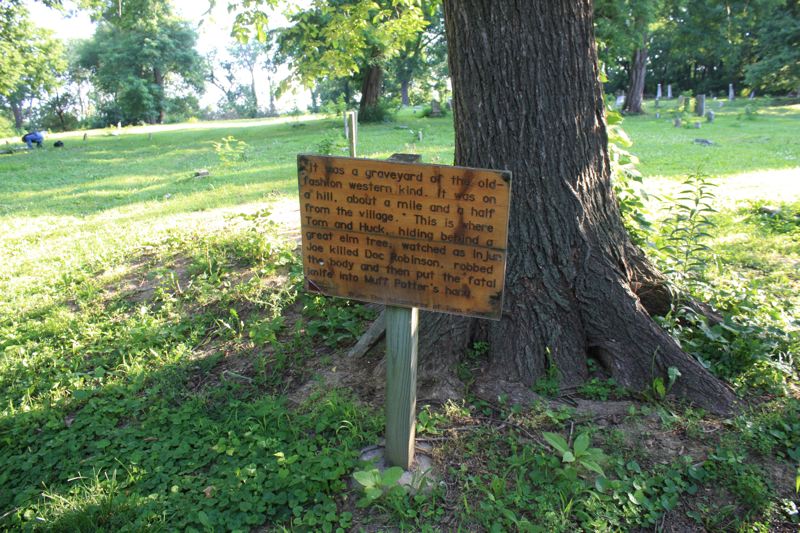 A Lot Of Folklore Of The Area Comes To Mind As You Stand In Old Baptist Cemetery,
mostly its appeal to the story the event in the old cemetery in Mark Twain's Adventures of Tom Sawyer. 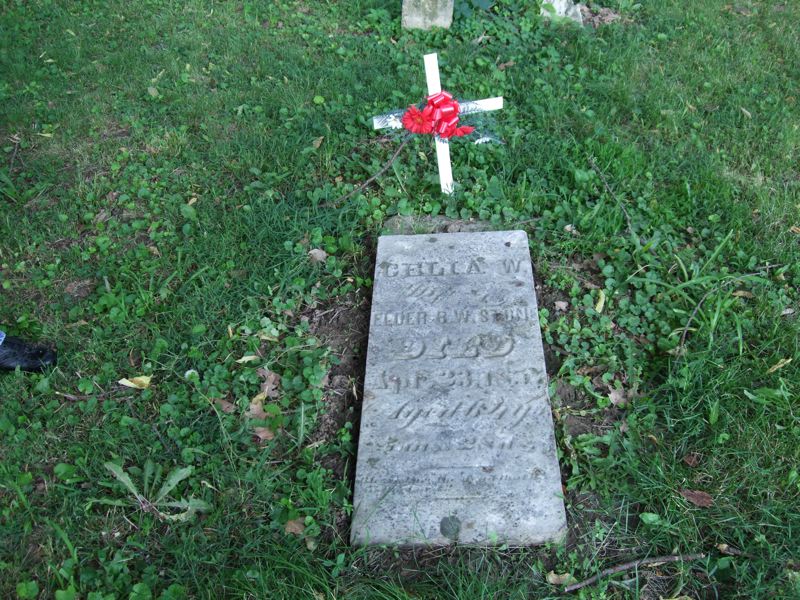 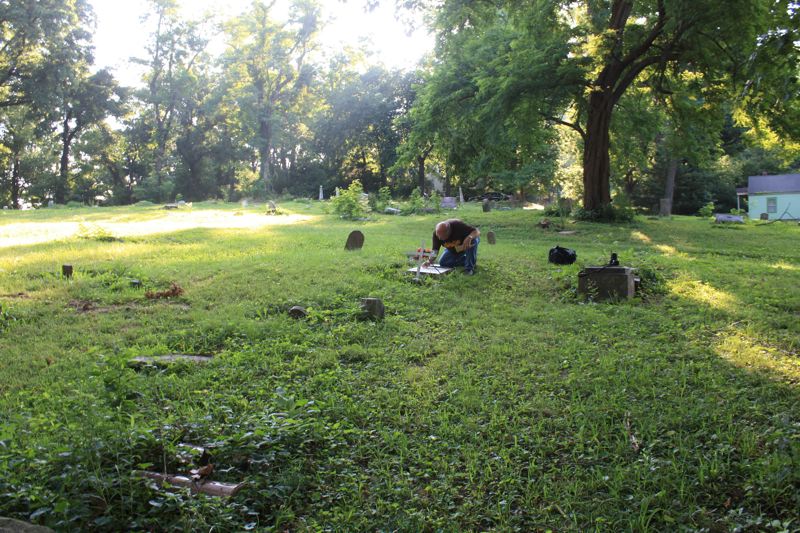 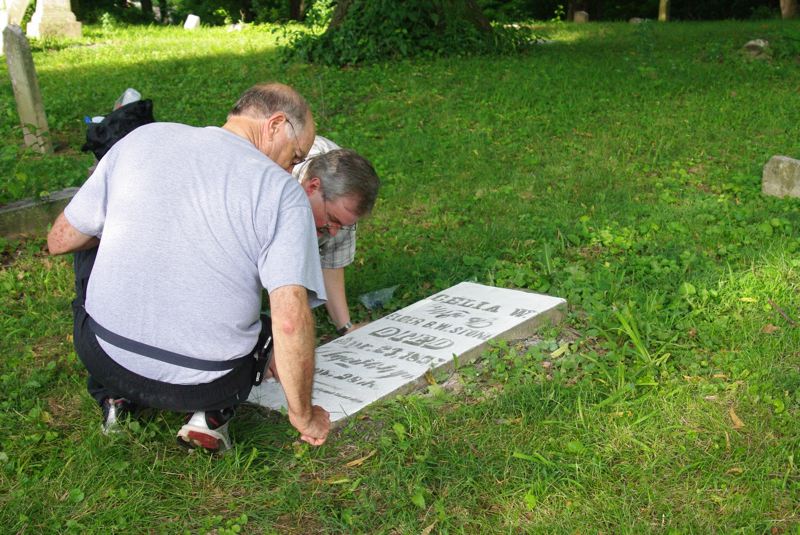 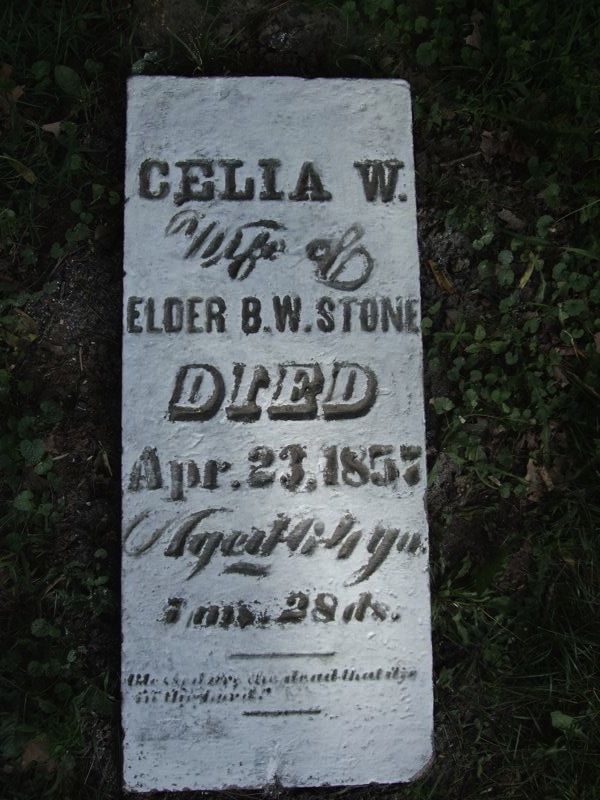 Chalking the monument protects it from degradation
as it washes off with the next rain.