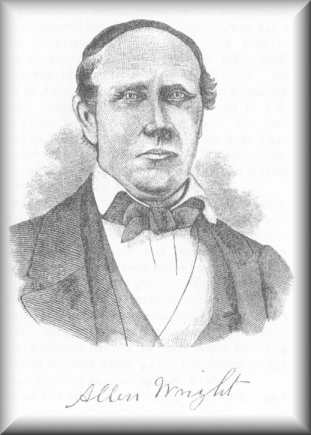 Biographical Sketch On The Life Of Allen Wright

The preacher to whom reference has been made, and who founded the church at Antioch, was Allan Wright, of blessed memory. He was born in Wayne County, Kentucky, November 19th, 1809, was the son of Evan and Rebecca Wright. On the 3rd of July, 1828, he was married to Elizabeth Summers. Shortly after this he removed to Alabama, where he remained a short time. He then removed to Vermillion county, Illinois, near Danville, where his oldest son, James N., was born. In 1850, he came to Missouri and settled on a farm in the western part of Randolph county.

He was above six feet in height, perfectly erect, and weighed probably one hundred and seventy-five pounds. He was broad-shouldered and somewhat angular. His hair was brown, but from early manhood he had been quite bald. His eyes were blue, bordering on grey. His complexion fair, and his expression earnest, cheerful and benevolent. His voice was strong and clear, yet soft as a lute. He sung well. Many a time have I seen a large audience moved to tears while he sang alone some favorite hymn at the beginning of the service and before he had spoken a word.

He was not a scholarly man, but spoke and wrote his vernacular correctly. I do not know what educational advantages he enjoyed, but he was an educated man only in the sense that he was trained to think accurately and investigate earnestly. He read much and thought profoundly. As a preacher he was argumentative and logical, as an exhorter he was not excelled, even in those days of splendid exhorters.

In more recent times preachers have greatly improved in their ability to reach the heads of their audiences, but many most successful in this direction are greatly wanting in " heart power," and while they convince they do not always move.

Allen Wright convinced the judgment and moved the heart. He was at the time of which I have spoken still a young man, and quite poor, with a growing family around him. He toiled in the field during the week, and preached on Saturday night and Sunday, at such points as were accessible, and returned to his labor on Monday morning. He often yielded, however, to the entreaties of the people and preached the unsearchable riches of Christ to them while the plow stood still in the field. He preached without salary, and for the most part in those days without compensation. I recall one scene which deeply touched my heart, young as I then was. He had preached for several days and was about to take leave of us. We had followed him out to the style-blocks to bid him good-bye. My father drew out his pocket-book and divided the scanty purse with the dear preacher, whom we all loved devotedly. The great tears came into the preacher's eyes. His voice was husky with emotion, as he said: "I thank you, Brother Ben; this will be a great comfort to my dear wife." Then, somewhat recovered, he said almost gleefully, "I think if anybody on this earth deserves to go to heaven, it is my wife, who remains at home and cares for the children, while I am away preaching, and Bally (pointing to his horse) who carries me to my appointments."

He continued to preach quite extensively over Randolph, Macon and Howard counties, making occasional visits into the counties on the south side of the Missouri river. During these years he was remarkably successful, baptizing many and establishing churches.

In 1841 he removed to Green county and located not far from Springfield, on a farm, where he remained until the death of his wife, on the 23d day of March, 1843. During, the years he resided there he preached as he had opportunity, and planted many congregations in southwest Missouri. After the death of his wife he spent three years as an evangelist under the direction of the State Meeting, as it was then styled.

By his first wife he had three sons that reached manhood, James N., Joseph B. and Spencer P., the eldest and youngest of whom are still living, and actively engaged in the gospel ministry.

In 1846 he located in Georgetown, in Pettis county, where, on December 22d, same year, he married Miss Lydia Virginia Fristoe. In all these years he was quite successful. In Southwest Missouri he cooperated extensively with that prince among men, Joel H. Hayden. Large congregations greeted him wherever he went. In almost every meeting persons confessed the Savior, and congregations were built up. While laboring in this region an incident occurred which illustrates the character of the times and the courage of the preacher.

At a meeting held perhaps in a grove, two young ladies made themselves quite conspicuous and greatly disturbed the congregation, in much to the annoyance of the preacher. He therefore reproved them sharply in very plain language. The next morning he started on his way to a neighboring town. While passing through a dense wood, a young man dashed up behind him and announced that he was the brother of the young ladies whom he had so severely reproved, and that he had come to punish him for the offence, that he must get down from his horse and fight him. The preacher remonstrated, argued, entreated and almost begged. He told him that he was a man of peace and did not want the disgrace of a fight. The young man was incorrigible, so the preacher alighted, tied his horse by the wayside, removed his coat and announced himself ready. The young man rushed upon him, was in an instant knocked sprawling on the ground. In another instant the preacher was upon him and administered to him a severe chastisement. At length the young man cried enough, and was released. The preacher then said "Young man, I bear you no malice; you forced this battle on me; you have been badly worsted. Now if you will never tell it I will not," and he did not, till just before his death, and then he would give no name. He always felt, he said, that he returned good for evil, for he made a decent man out of that young fellow.

Shortly after his second marriage he removed to Lexington, and became the pastor of the church there. This was perhaps the first church in the state to employ all a preacher's time. Here he remained for more than ten years. Though the pastor of the church, he was permitted to spend much of his time evangelizing. Here he had more time for reading and better opportunities to secure good books than he had before enjoyed. He had already become a fine speaker and a man of great influence among the churches. He soon became a recognized leader, and one of the ablest men in the state in his church.

His ministry in Lexington was much of the time under circumstances "that tried men's souls," and under which a weaker man would have failed utterly, but he secured the affection of his brethren and commanded the respect of the entire community. His influence was felt for good throughout all that region of country, having preached for all the churches more or less, and having secured a strong personal influence in all of them. It was here he lost his second wife, (who died May 24th, 1857,) by whom he had two children, Allen Wright, Jr., and Ella V., the last named having crossed "over the dark river."

After the death of his second wife he again became an evangelist. He visited his son James N., who was then devoting his whole time to the church in Barry, Pike county, Illinois. On his return he held a meeting in Hannibal, which resulted in forty-five accessions to the church, including the mayor of the city and his family.

In the fall of 1858, or early in 1859, he married Lizzie R. De Jarnett, of Pettis county. He then bought a farm in the county and began to preach in the region round about. During the summer of 1859 his health began to fail. He, with his wife, made a visit to Republican Church, in LaFayette county in the summer of 1860. While there he was taken sick at the house of his old friend and brother, Anderson Warren. He could not have fallen into kinder hands, nor among a people who loved him better, but notwithstanding all that loving hands and skillful physicians could do, his sickness proved to be "unto death." He passed away on the 19th day of July, 1860, mourned by thousands who had come into the kingdom of God through his influence. Brother McGarvey, then of Dover, Missouri, and the writer, were called to attend his funeral. A large. audience was present at the old Republican Church, and all wept and mourned him as if he had been a member of their own household. His devoted brethren there claimed his body, as he had organized their church. They laid it away to rest only a few feet from the pulpit where he had so often preached the gospel. They also erected a neat monument to his memory and there his dust sleeps.

Rest, my dear brother, the first man whom I remember as a preacher of the gospel, and whom I shall hope to see first among the redeemed of the Lord, if he shall count me righteous for Christ's sake, and permit me to enter in through the gates into the city.

Location Of The Grave Of Allen Wright

The city of Higginsville, Missouri lies just east of Kansas City in the northwestern part of the state. Traveling east onI-70 from Kansas City, go to Exit 49, Hwy. 13 and head north six miles to Higginsville. In town turn right on Hwy. 213. Go to Hwy. T (Aullville Rd.) and turn right. Heading out of town the road will turn to the south. In less than a mile the Old Republican Christian Church Cemetery will be on your right. The church building where Wright preached his last sermon no longer stands, but was on the property adjacent to the cemetery. Wright's grave will be in the cemetery. 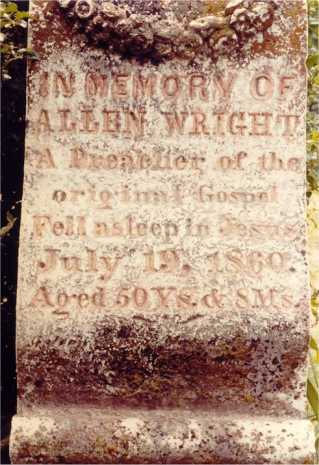 Note: Special Thanks To Bill Goring, preacher in Kansas City, Mo. For Providing Information & Picture Of The Gravesite Of Allen Wright. Bill Was Born In Higginsville, Mo.