The Life And Work Of O. H. Tabor

O. H. Tabor, DD, STD, (1903-1993) was a gifted preacher and minister, author of eight books and hundreds of weekly newspaper and Firm Foundation articles entitled “The Abundant Life;” a musician and composer, missionary and Christian Broadcaster for over sixty years with the Churches of Christ in West Texas and New Mexico.

Orbin Herschel Tabor (or O. H. as he was known) was born in Whitt, Parker County Texas in 1903, and moved to the West Texas with his family in 1920, where he lived the remained for the rest of his life. He came from a musical family, and could read and compose music, a gift he carried with him all of his life. He married Nettie Pearl (Polly) Hall of Floydada, Texas. They had three children, Kay, Ruthye and Claude. Kay and Ruthye have since passed. O. H. was a minister of the Church of Christ for over 60 years, a radio host of a weekly gospel show in Lubbock, author of eight books published by Dryden Sinclair for The Western Christian Foundation, wrote many hymns, was a regular featured writer in The Firm Foundation under the title, “The Abundant Life.” O. H. and his wife Polly were loved and respected not just by the congregations they served, but by the communities in which they lived. O. H. and Polly lived through four wars and the Great Depression, turbulent sixties and economic hardships in West Texas. These experiences helped shape their ability to see the needs of others and provide help and comfort, as well as spiritual guidance and hope during troubled, dark times. He baptized, married and put to rest thousands of believers during his years with the Church.

O. H. began his preaching in Morton, Texas at the age of 26 in 1932, after having worked in as a pharmacist for a short time in the local drug store. O. H. was baptized by A. Hugh Clark, and had been asked to preach occasionally and assisted with summer meetings by the local Church when he was asked to become the full time minister of the Stamford Church of Christ in 1938. It is difficult now to appreciate the great risk this was for O. H. and his family, as they were in the midst of the depression and hard times, and O. H. had a steady job. Yet, he left secular work behind him and entered the ministry at the most challenging economic time of the last century for his love of the Lord. O. H. and Polly remained there for three years, then moved to Lamesa, Texas, where he became minister from 1941-1947. In 1947, O. H. and Polly were invited to Carlsbad, NM from 1947 to 1951, and then on to the Southside Church of Christ in Lubbock, Texas, from 1951-1956. O. H. and Polly then were invited to Lovington, NM from 1956 to 1959, and back to Carlsbad, NM, at the Fox and Lake Street Church from 1959-1964. They returned to Lubbock, the Parkway Drive Church, from 1964-1968 and then retired in Lamesa, working as a part-time preacher and missionary at the Downtown Church of Christ, from 1968 until his death.

With hard times and the depression, Polly would feed the hungry, often making extra soup and bread, peas and beans, as men, women and children approach their back porch on Sundays. She gave out clothes and invited visitors to Church services to meet other members. This led to dozens of pot lucks each Sunday at the Church, open to all, leading to a growing and vibrant congregation, filled with hope, songs and love.

During his years of service and ministry, O. H. participated in multiple conferences and meetings as a preacher and teacher in many states, from California to Kentucky, including with the most prominent preachers of his time. He had a half hour radio show in Lamesa, Lovington, Carlsbad and Lubbock for over twelve years, and was an invited guest speaker at other churches, also creating dialogue with other faith leaders, including a Catholic Priest, who gave him a prized Bible. As the featured writer of the Firm Foundation for twenty-two years under his “Abundant Life” articles, O. H. reached thousands of brothers and sisters throughout the nation with his message of love, care, how to deal with adversity, prayer and worship of God and Christ Jesus. He was beloved for these articles and their common sense and deep spiritual insights, drawn from the New and Old Testaments and his rich life. In Lamesa (the Lamesa Press Reporter), Lovington, Carlsbad and Lubbock, he also was a featured article under the “Abundant Life” every Sunday. He later earned a joint Doctor of Divinity and Doctor of Sacred Literature degree from Covington Theological Seminary, and was recognized at the graduation ceremonies as the Valedictorian of his class.

O. H. wrote eight books during and after his ministry, published by The Western Christian Foundation: The Deeper Life, Fountains of Hope, Hills of Hope, Springs of Faith, Beams of Light, Conflicts and Crises of Christianity, The Abundant Life, and Fruitful Living. 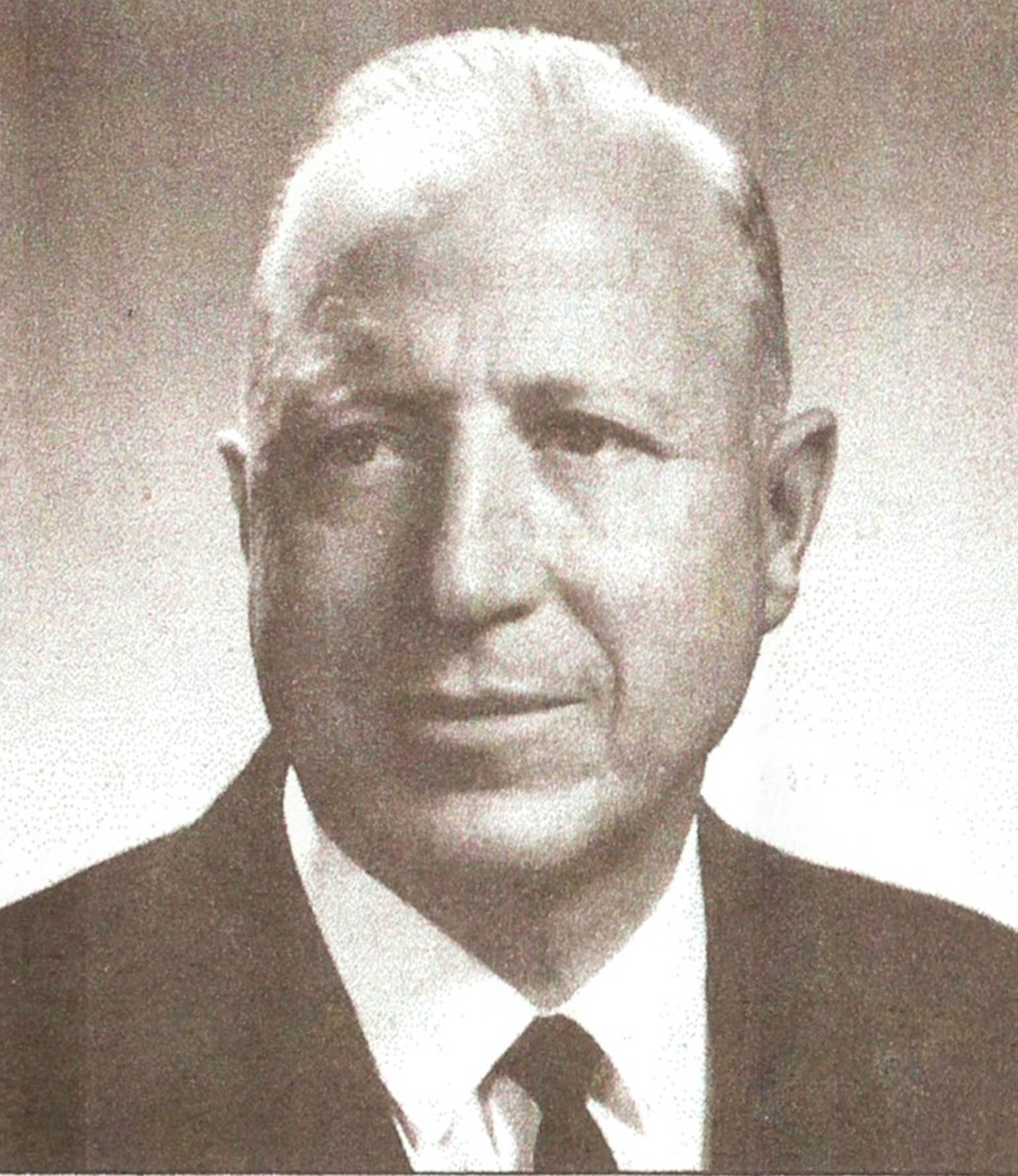 In the introduction to his book, Fruitful Living (The Western Christian Foundation, 1978), he wrote:

“Jesus said, ‘I am the vine, you are the branches. If a man remains in me and I in him, he will bear much fruit; apart from me you can do nothing.’ The beautiful life is a fruitful life. We all want to make our lives fruitful. As God’s children we should live as those who have heaven’s glory in our souls. A fruitful life is one that fills its mission on earth. This little book is sent out in hope that it may help someone to bear precious fruit for Jesus Christ and thus remain in him. Perhaps some sad may once again look up after reading some of these words. Perhaps someone who is discouraged may find strength in these chapters to go on and try again. Perhaps someone who has fallen beneath what he desired to be may find strength for bearing more fruit, which is so precious in the sight of the Lord.”

In the many sermons he preached, O. H. was able to lead his congregation through the challenges and trouble of their daily lives to the Gospel of forgiveness, mercy and love of God in Christ Jesus. In the invitation each Sunday, there were few times that the front pew was not full with those needing prayer requests, confessing and asking for God’s guidance, or to be baptized into Christ.

On one very stormy Sunday night in Lamesa, Texas, with tornado warnings having been issued and elders standing on the front steps watching for funnel clouds, the service continued with hymns singing out to God. O. H. went a little faster that night, but at the invitation, he still had several members come forward asking for prayers. The service finished without a tornado touching down, but two of the elders said they saw funnel clouds in the distance heading towards the town. They passed over the church and town that night during the service.

“Pop,” as he was affectionately known to his grandchildren, and Polly were warm and giving. Many of their grandchildren’s favorite memories were the Saturday night kid’s parties, where he and Polly would host dozens of children to pray, play games and make long lasting friendships. When O. H. passed in 1993, his grandson, Roger Busse of Oregon, performed the service and eulogy. He recalls one of his favorite memories being O. H. preaching on the Prodigal Son. O. H. put the emphasis on the father, and oriental lord, running down the road with his robes flowing in the wind to reach out and embrace his lost son. “This is who God is,” he would say, “running and embracing us in love as we come to him.” 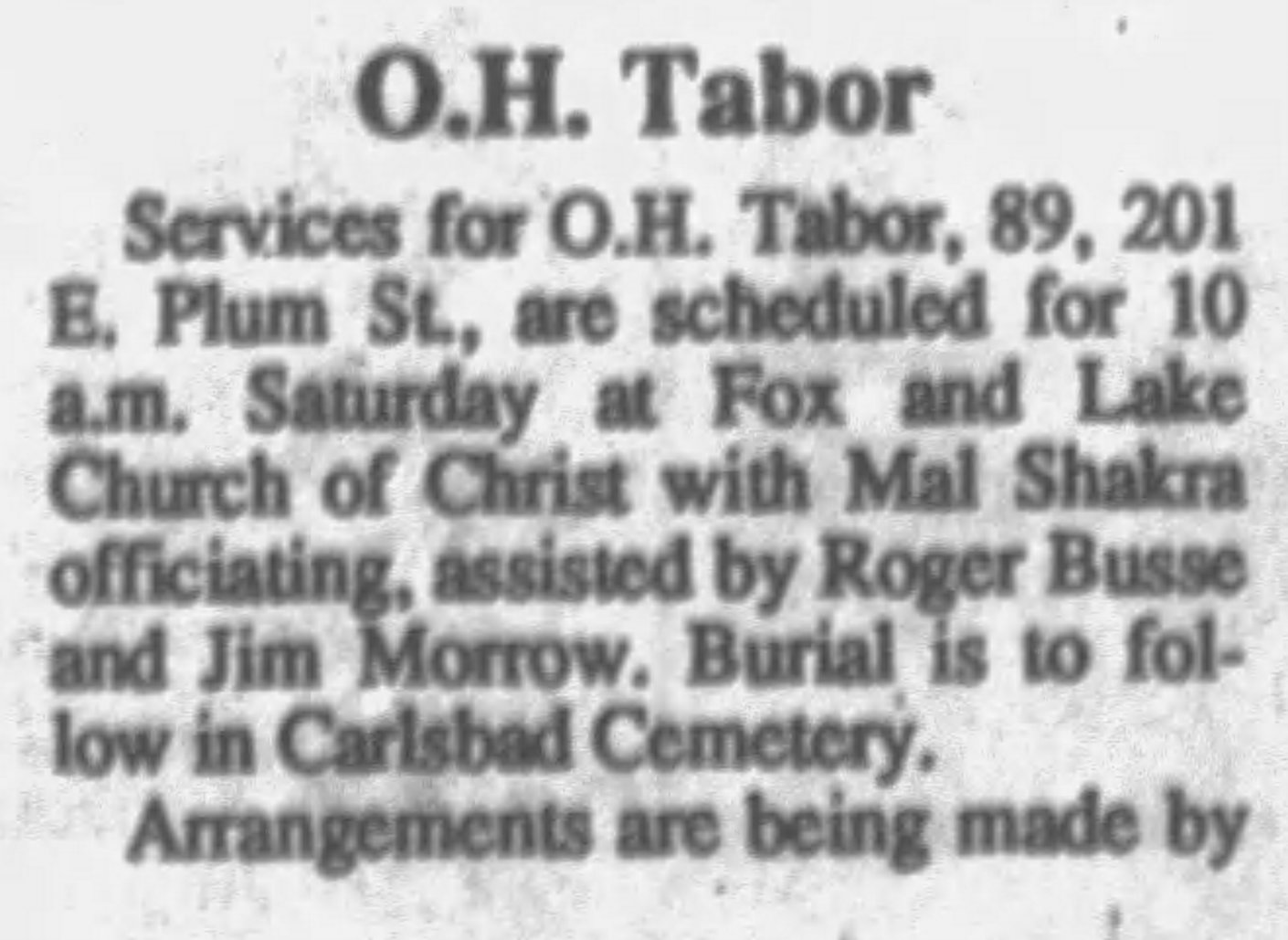 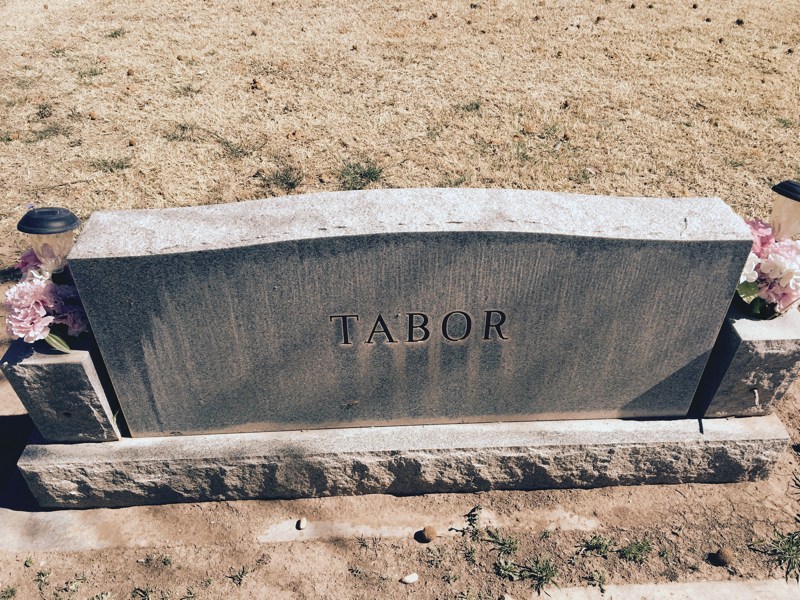 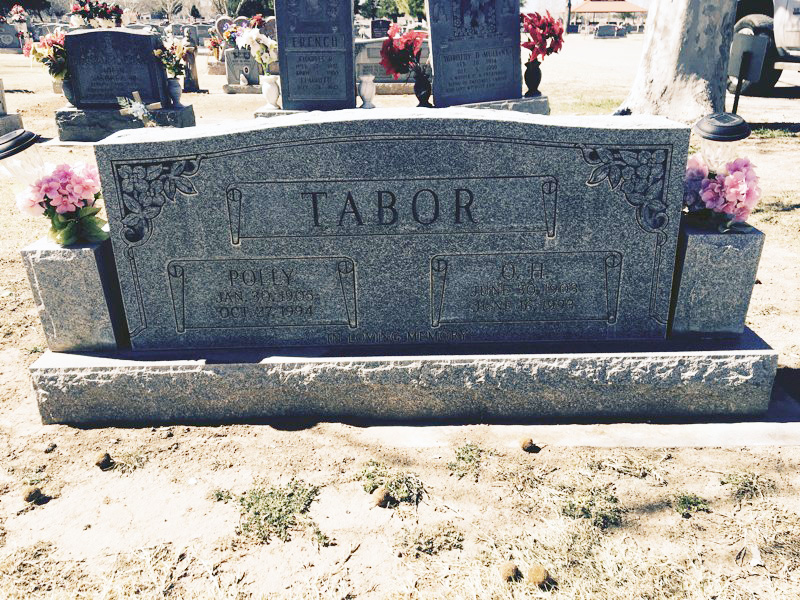 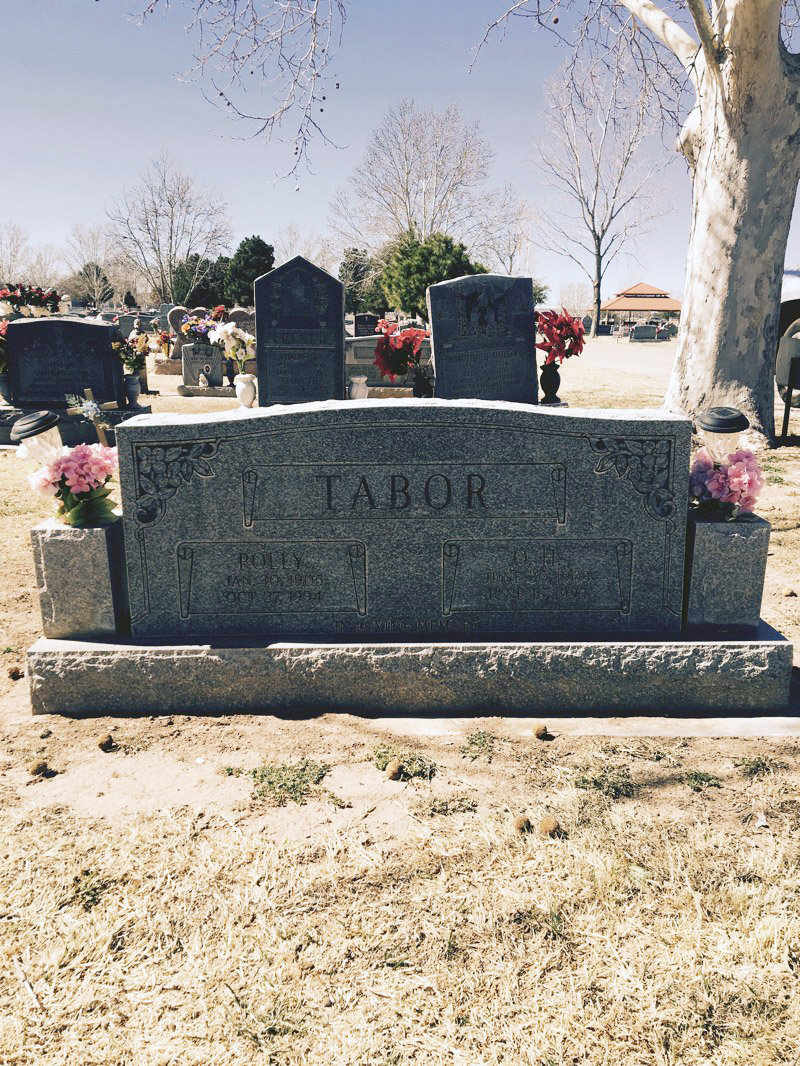 Special Recognition: Special thanks to Texas preacher Kirk Castleman for bring to our attention the person and work of O. H. Tabor. He worked diligently to provide the information made available on this webpage. He enlisted the assistance of Bruce Daughtry, the youth minister for the Sunset church of Christ in Carlsbad, to go out to the cemetery and locate the graves of brother and sister Tabor. Many thanks to his contact and acquiring of a wonderful life sketch by Roger Busse.