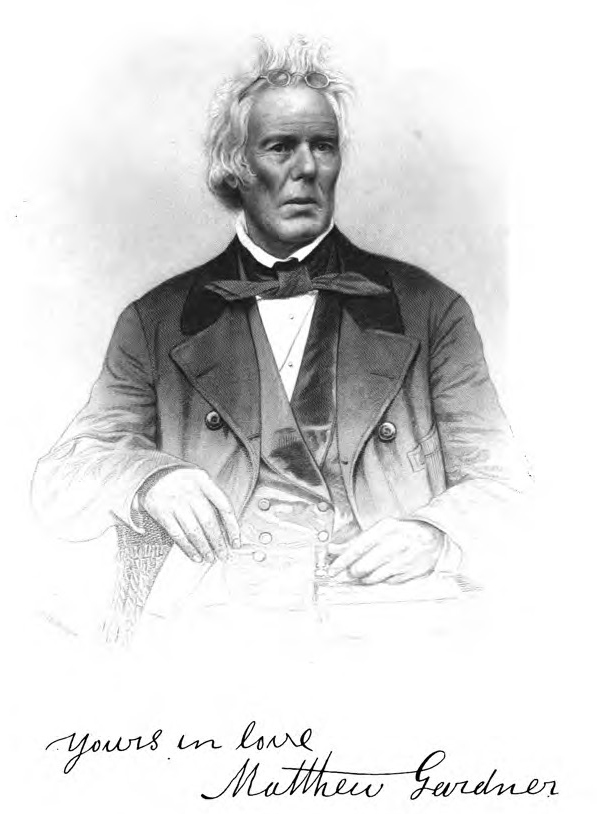 The Life of Matthew Gardner

Matthew Gardner was born in Stephentown, New York on December 5, 1790. In the fall of 1800, his father moved their family to what is now southern Ohio, near the Ohio River. In the summer of 1810, Christian minister, Archibald Alexander, came into the region where the Gardner's lived, and preached in their home. In August, young Matthew expressed faith, repented and confessed Christ. In September, 1812 he attended a Christian Conference in Bracken County, Kentucky, where he determined to commence public speaking. Barton W. Stone was in attendance at this meeting.

On May 20, 1813, Matthew married Sally Beasley. Within weeks he was called to arms to defend his nation in the second war with England. His term was short, and he returned to his home and purchased 100 acres from his father-in-law for the purpose of farming the land. Matthew and Sally were the proud parents of eight children.

The 2nd day of March 1818 was of particular significance, in that Matthew Gardner was ordain to the Christian Ministry. Immediately, he set out to establish a congregation of the Christian church in his community. The Union Church in the west part of Brown County, Ohio was instituted during the summer of 1818.

In 1823, Matthew subscribed to Alexander Campbell's Christian Baptist. From that time, Campbell, his reform and teachings, became a study to the Christian preacher. In 1832 when churches under the influence of Barton W. Stone merged with the Reformed Baptists of Kentucky (Campbell's Disciples of Christ) he strongly objected for many reasons. One was the teachings of Campbell on salvation, that baptism for remission of sins was necessary to be saved. His second objection was that Campbell's Disciples refused to allow "women to enjoy privileges in the church equal to men. The Christian church had women preachers. Third, Disciples take the Lord's Supper every week. Such regularity, in his thinking, demeaned the greatness of the feast. Fourth, Gardner believed that the Disciples of Mr. Campbell taught that the fullness of the action of the Holy Spirit was through the Scriptures alone, to which Christian Churches denied.

Over the years of Gardner's ministry, he took opportunities to hear Alexander Campbell, and discuss his differences with him personally. He debated Disciples preachers, and fought time and again when Disciples preachers sought to divide the churches he worked to establish and build. He was deeply saddened over the years at lost companionship with so many preachers and churches who left the Christian Connection for the sake of unity with Campbell's Restoration Movement. So much was his effort to destroy the influence of Alexander Campbell in Christian Connection churches that he wrote a pamphlet in 1868 and distributed it among the churches. To make sure it was preserved, he inserted its contents into his autobiography.

Through the years of his life, Matthew Gardner, experienced false accusations about his integrity, on occasions being dragged before magistrates. At times he had to go to law in order to clear his name when falsely accused. Each time he was exhonerated, but deeply stressed in the process. He experienced heavy loss in his family over the years, experiencing the deaths of three of his children, and one of his daughters-in-law. When Sally, his wife of fifty-six years, passed away in September 1869, his world was turned upside down. In his autobiography he went into great details to speak of his loneliness and love for his dear Sally.

Late in life, Andrew Gardner reckoned that his ministry he brought over 5000 people into the church as well as establishing twenty-two congregations of the Christian Church.

In his eighty-third year, while on his ninth excursion to the home of his youth, New England, Matthew Gardner was attending a camp meeting, when he fell in his hotel room, breaking his left leg near his hip. His sons were able to make the journey to collect their father and take him back home. However, his health continue to fail until, on the 10th of October, he passed away.

Next to his wife, his body was planted under the sod just behind the Union Church he had established in the inaugural year of his ministry, there to away the determination of his Creator.

Matthew Gardner's Autobiography was released the following year, being edited by his long-time friend, and pastor of the First Christian Church in Cincinnati, Nicholas Summerbell D.D. The work was published by Christian Publishing Association.

Chronology of the Life of Matthew Gardner

1770
MG’s father’s family moved to New York, on the line of Massechusetts.p.9

1788
The territory now known as Ohio was first settled. p.10

Fall, 1800
Gardner family moved to Ohio, setting out on September 1. Reached Pittsburgh by October 1. Took four weeks to come down to Limestone, (now Maysville, Ky). Moved into the new house about 16 miles west, they built on the river, 1 January, 1801. MG was 10 years old.

April, 1809
At 17 MG decides boards a flatboat heading to New Orleans. = Striking out on his own. Becomes a universalist under the influence of the riverboat captain, Mr. Jenkins, p.15

Summer 1810
Archibald Alexander, the Christian minister comes into the neighbor to preach. He preaches at the home of MG’s father. p.22

October 1810
MG and a few others are baptized by Archibald Alexander “in the beautiful water of the west fork of Eagle Creek, below the old state road to Decatur, about two miles from my father’s house.”  A church was organized there afterward. P.25

December 5, 1811
A few days before his 21st birthday MG’s father evicts him from his home, never allowed to return, due to his refusal to exit the Christian Church. (His father had left the church due to a disagreement with Archibald Alexander over working on the “sabbath”) p.27

May 20, 1813
Marries Sally Beasley. P.30 Three days after their marriage he returned to preaching.

July 1813
MG answers the summons to arms in the war with England. P.30

January 1814
After buying 100 acres from his father-in-law, he moves into a cabin, already built on the property. P.31

Fall of 1821
William L. McCalla, Presbyterian, moves and settles across the river (Kentucky side) preaching in a Presbyterian church. For a time he and MG share the same school house to preach when McCalla would come over to preach to a few Presbyterian families living in MG’s neighborhood. P.46.

1823
Organizes a Christian church at the old stone meeting house, NW of Maysville about 5 miles, and about 3 miles from the Ohio river. P.51, 52

August 1823
MG brings suit against William L. McCalla once again for lies and slander in a pamphlet he wrote slandering MG. This time in Augusta, Kentucky. 4 day trial, MG wins the suit p.52-58

1822 or 1823
MG began preaching in Georgetown, Ohio, county seat of Brown County. Church organized amidst much opposition of Presbyterians and Methodists. Building erected soon after. P.60

March 1824
MG gets knocked overboard the ferry heading to Kentucky side. Saved by 14 year old boy. Also gets thrown from a horse. p.61-63

August 1825
MG visits Cane Ridge while on a preaching tour in Kentucky. Seemed to him as holy ground. p.64.

1826
MG establishes a church at Russellville, a town on the Ripley and Hillsborough Pike. A brick chapel was built. The church grew to 300. Elder John T. Powell invited to preach there.  P.66

1830
MG publishes a pamphlet on the Godhead, in reaction to Mr. John Rankin, Presbyterian who had published a document to promote Presbyterian view. P.68ff

Spring 1833,34
MG preaches at Millersburg on road between Maysville and Lexington. Church established there. P.71,72

Fall 1835
MG goes to Jamestown near Zenia and preaches in the Disciples church house. Establishes a Christian Church there. p.79-80

1839
Elder John Phillips organized a church at Higginsport, on the Ohio River. About 3 miles from Union Church. p.92

1839 or 1840
MG organizes the Mount Pleasant Church in Clermont County, between Felicity and Ohio River. p.88

April 14, 1841
The Western Christian Association was organized. MG was elected editor of a new paper called, “The Christian Union.” p.92-93

Later Part Of 1842
Millerism began spreading in the area. William Miller, who taught that the world was coming to an end in 1843. “Forty-three-ism” p.95

Spring and Summer 1846
CM contends with the Free Masons. p.99

1849
MG wrote a book against Freemasonry, and accused by Mason as being a womanizer, led to his being a defendant in a court case. p.105ff

August – September 1854
MG makes another trip to New England. p.118-120
January 22, 1856
Trial within the church over hay stacks that he had purchased from a member. The member thought MG had defrauded him out of $193. 16 years previous, the case was settled in the state Supreme Court where it was determined that MG owed the man nothing. But, the man started bringing it up again. So, MG had the local magistrates try it again. Again, MG won the case. The plaintiff had to pay court costs. p.122ff

May 21, 1860
Storm hit the church where MG was meeting. Full of Christians at Bethlehem Church. The winds ripped the roof off the building. No one perished, but several hurt. MG was not hurt at all. p. 131

Summer, 1860
MG wrote a pamphlet on “Facts for the Churches, Elders, and Brethren of the Southern Ohio Christian Conference.” In it he condemned freemasonry.  p.132-133

October 1860
Southern Ohio Conference met and charged MG with false statements in his pamphlet, and it was determined that either he rescind his pamphlet or be censured. p.135ff

October 1861
MG approached by the Union Church to become its pastor again. He had determined to give up full-time work by the time of his 70th years. So he declines the invitation, but commits to come and preach for them on a regular basis. p.140

1863
The Ripley Christian church had a Disciples’ preacher come in for a meeting. There was an effort to merge their efforts. MG appeared. When given the opportunity, he expounded three differences in the Christians and the Disciples. “First: Disciples do not permit women to enjoy privileges in the church equal with those of the men. The Christians do. Second: Disciples do not receive into full church fellowship any believers who are not immersed. Christians do. Third: Disciples eat bread and drink wine for the Lord’s Supper, every first day of the week. Christians do not.” The merger failed. p.144

MG claims to have organized twenty-two congregations of the Christian Church. 5000 have come into the church by his preaching. At Union church up to a thousand have been received. At Bethlehem church above 1300. p.153-154.

October 1866
MG resigns his pastorate at Bethlehem Christian Church due to having preached over 40 years. p.172.

April 1, 1868
MG completed a pamphlet, in which he gave a written explanation and defense against Mr. Alexander Campbell’s teaching, he called, Campbellism. p.183-199

July 26, 1873
MG fell in his room while at a Camp Meeting near Hyannis, Massachusetts. He broke his left thigh-bone at the hip-joint. p.249

The Autobiography Of Matthew Gardner

Shinkle Ridge Cemetery is located in Higginsport, Brown County, Ohio. From Cincinnati, take Hwy 52 east. This road hugs the Ohio river for many miles; called the Ohio Scenic Byway. Passing through the small community of Utopia, turn left on county road 548. Turn left at the end of the road on Boudes Ferry Rd. Turn right on Shinkle Ridge Rd. The church and cemetery are on the right. The Gardner monument is behind the church building. Look for a pink granite monument. 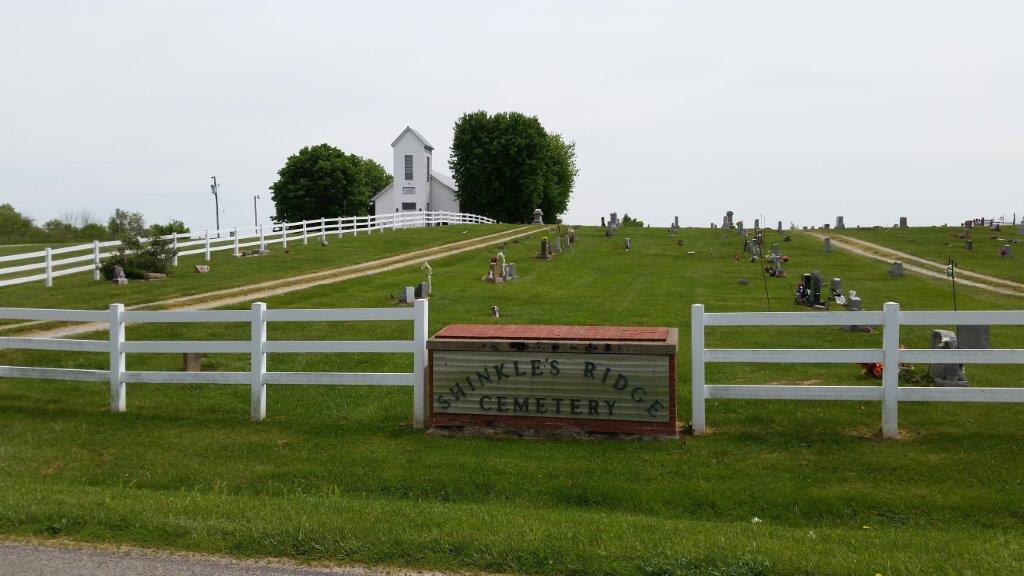 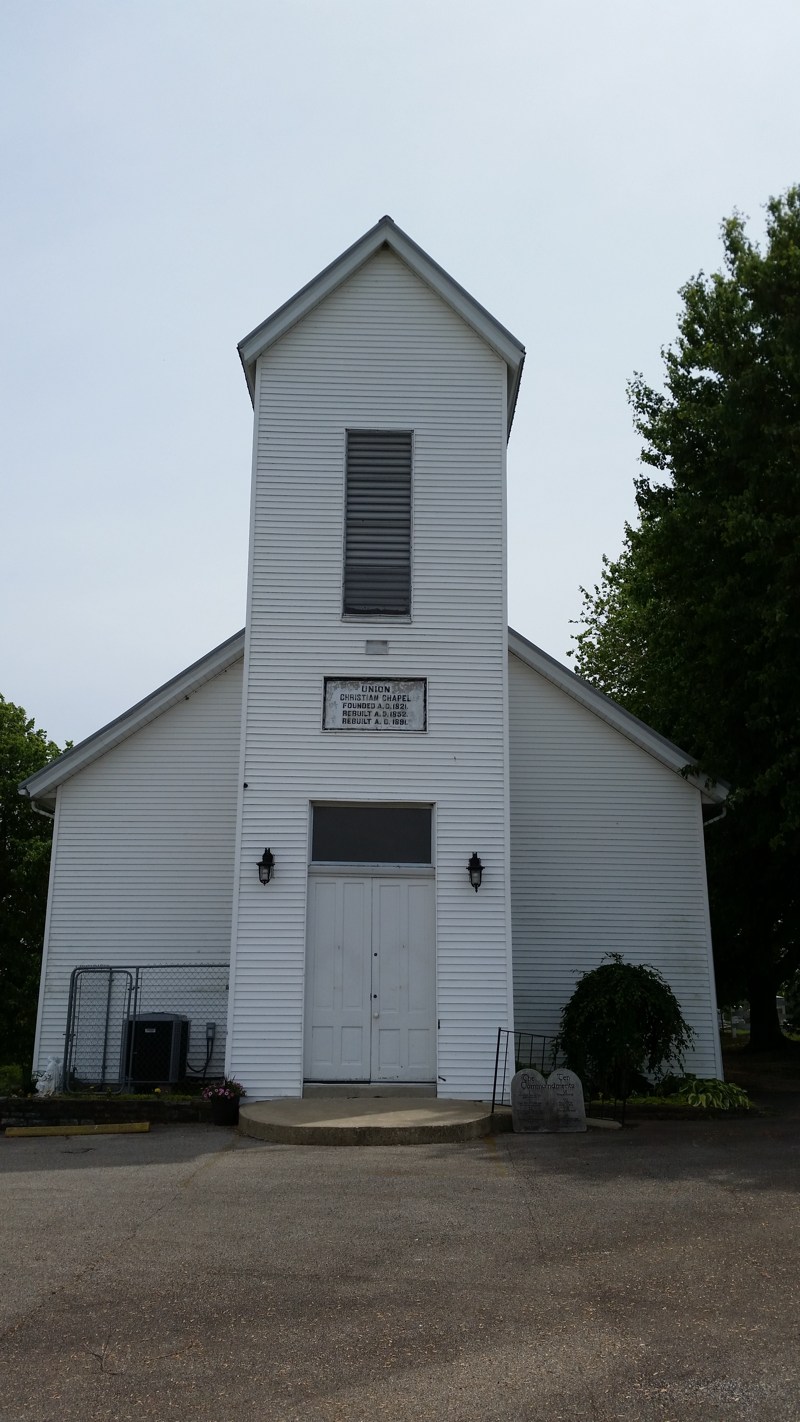 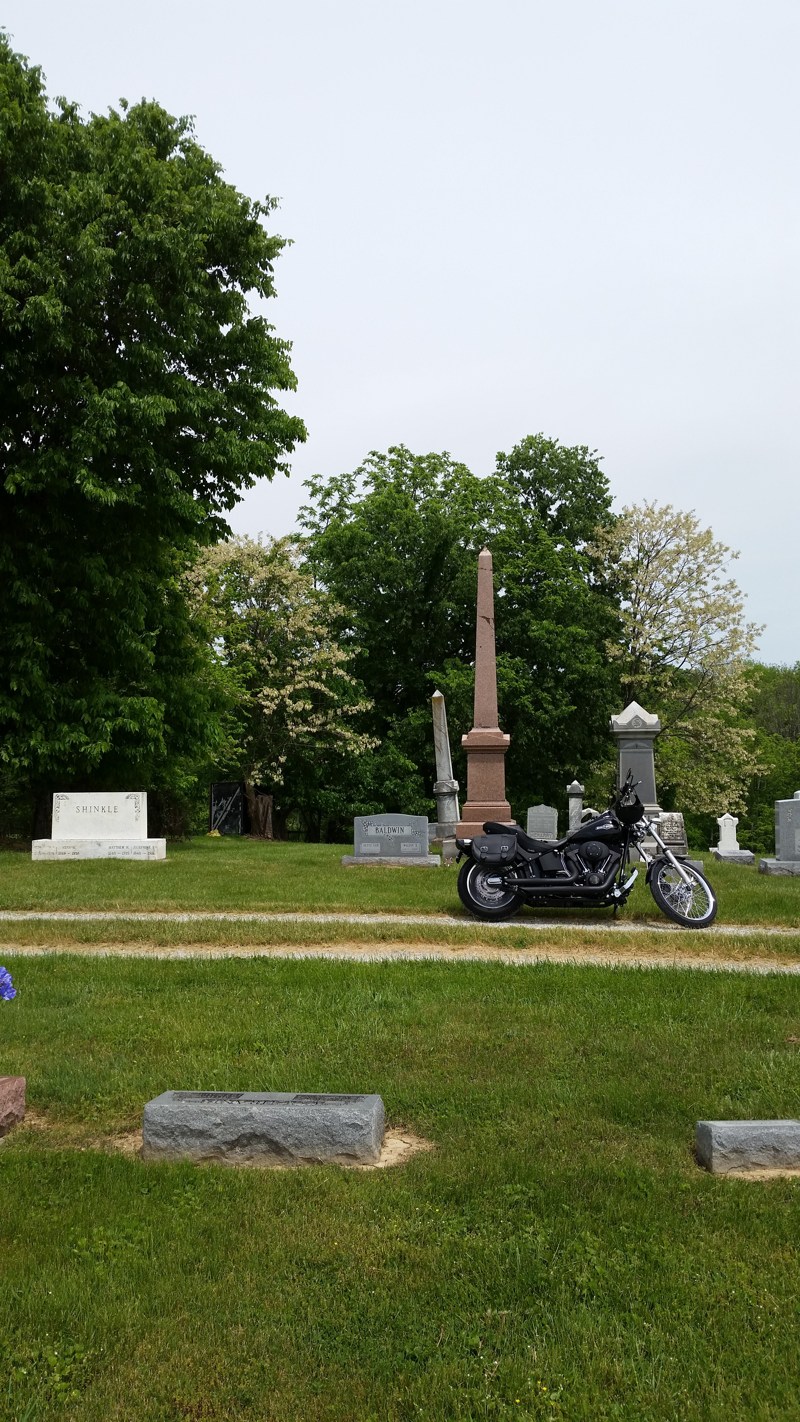 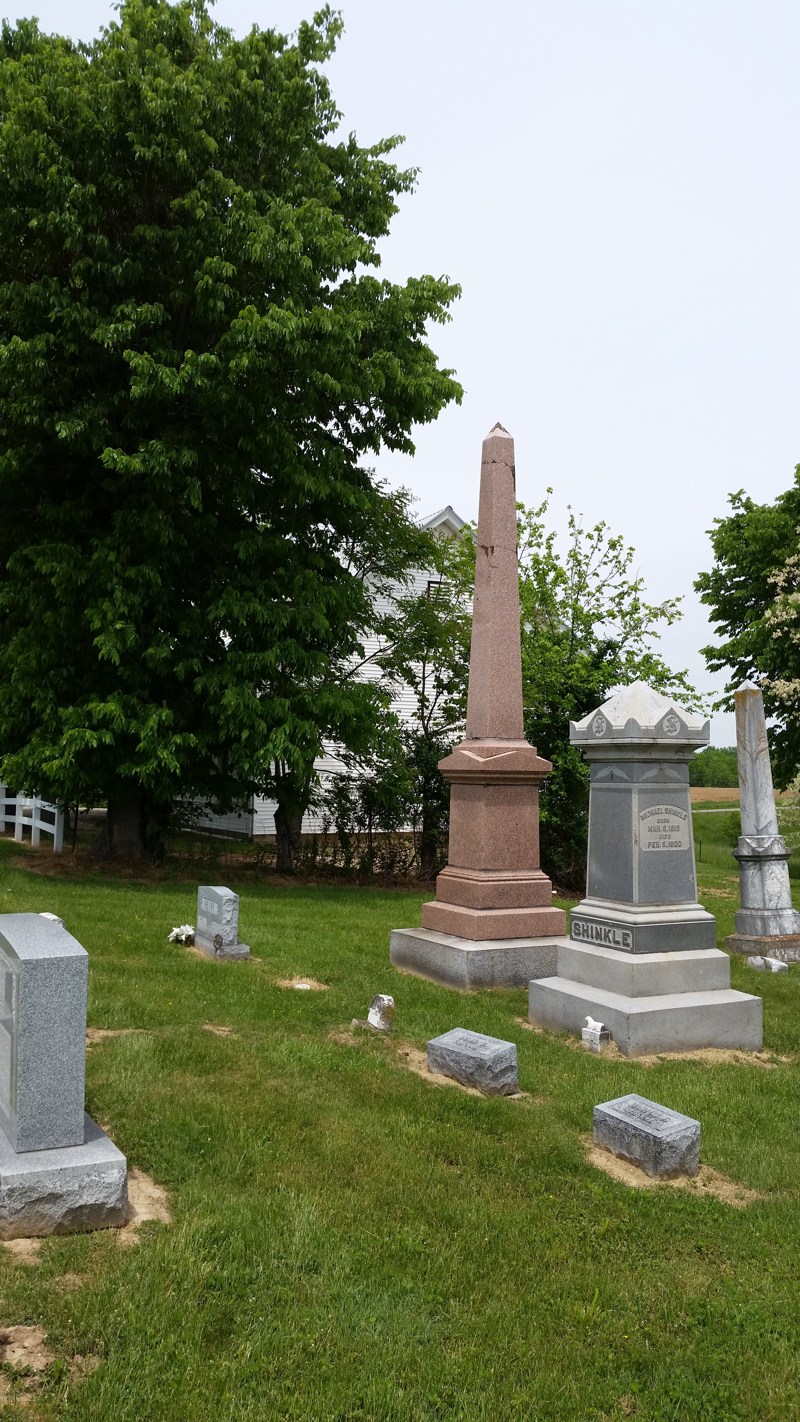 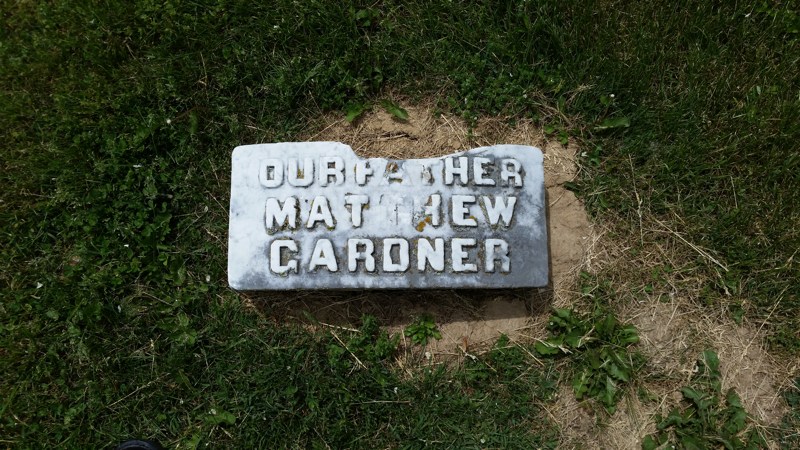 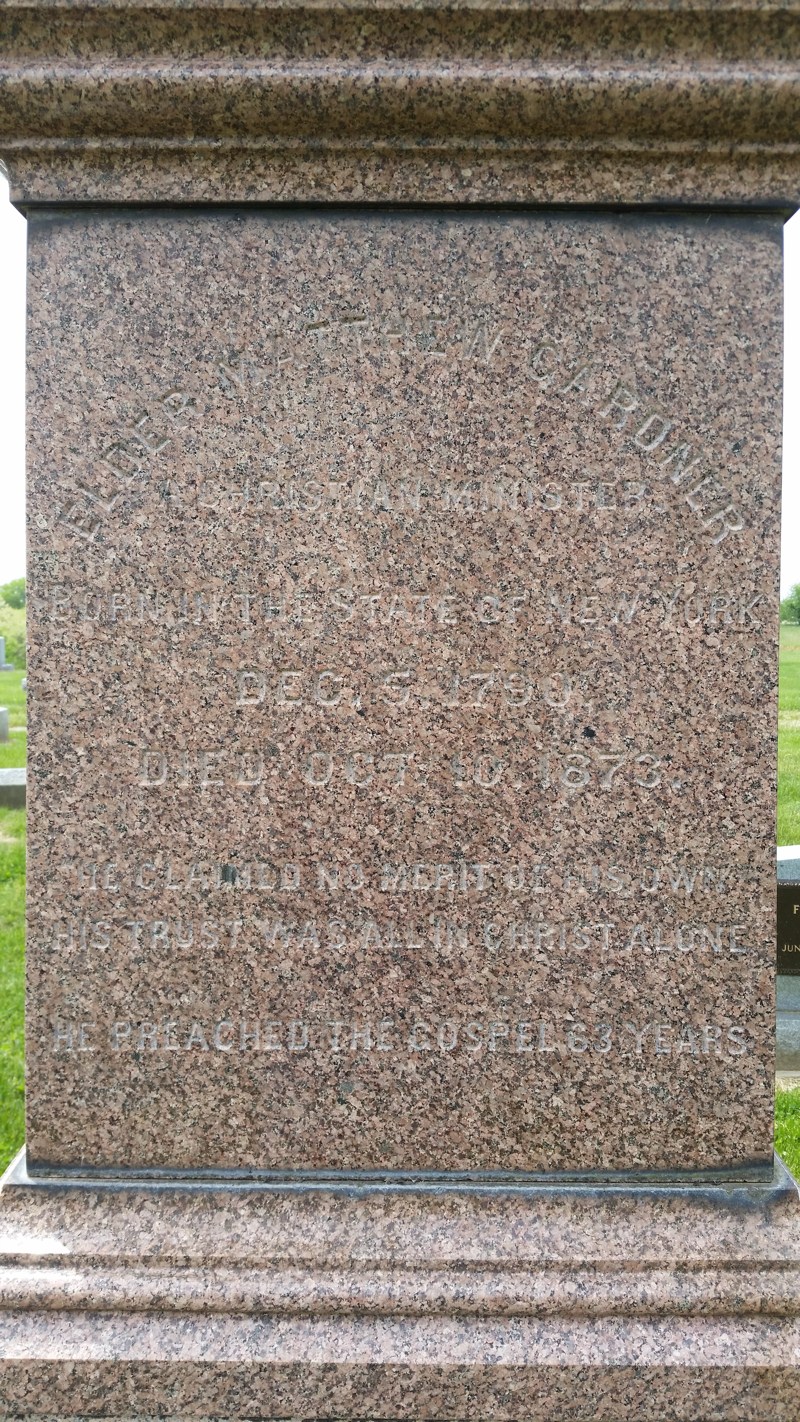 Born In The State Of New York

He Preached The Gospel 63 Years 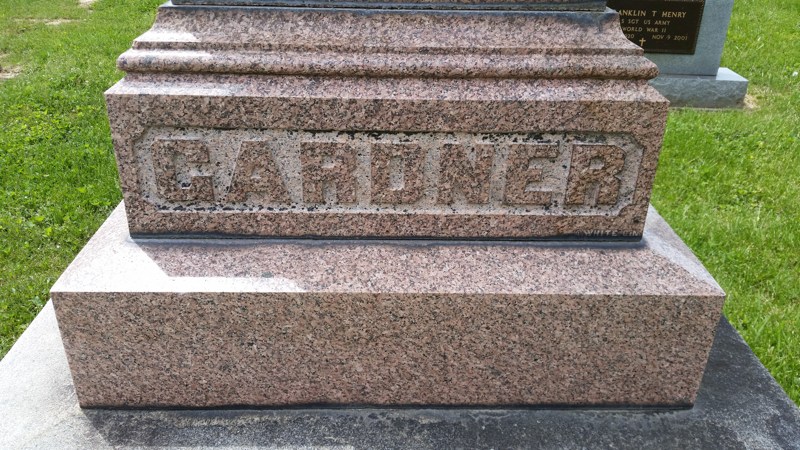 Special Recognition: Thanks to C. Wayne Kilpatrick for locating and photgraphing the grave of Matthew Gardner.