This well-known, faithful minister of the Gospel was born, September 17, 1813, in Youngstown, Trumbull County, Ohio, to which place his father, Samuel Hayden, had emigrated from Pennsylvania, in 1803.

In a family of eight children, seven of whom were sons, Sutton was the youngest. In boyhood, he sought every opportunity to indulge his inclination for study, and used such books and facilities for education as lay in his way. He was especially fond of religious books, and read with great delight "Hervey's Meditations" and the "Pilgrim's Progress" at a very early age. Other works, mostly of a religious character, fell into his hands, some of which required close application and study, to which he diligently applied himself, and, by this means, made considerable progress in the acquisition of useful knowledge. From the age of fifteen to seventeen, he laid the foundation of a classical education in his own native village. He rose rapidly in his classes, surpassing older students in the study of the classics, for which, rather than mathematics, he had a taste.

His religious convictions were early, and marked. His parents were honorable members of the Baptist Church, and he was trained in the doctrinal views and practices of that body. Previous to his obedience to the Gospel, he passed through the usual Baptist experience, so common at that day, of "getting religion," and often wondered why it was that God was so long in coming to give relief and bring joy to his soul. At last, he had the Gospel plan clearly explained to him by that gifted and eloquent servant of God, Walter Scott, by whom he was immersed, March 20, 1828, in the fifteenth year of his age.

He soon began to exercise his gift in exhortation, traveling considerable with other preachers as associate and aid, especially with his brother William.

In the summer and fall of 1832, when nineteen years of age, he began to hold meetings, and his labors were every-where crowned with encouraging success. He was married, May 31, 1837, to Sarah M. Ely, of Deerfield, Portage County, Ohio. 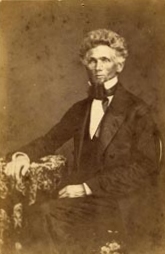 In September, 1840, he settled in Collamer, Cuyahoga County, Ohio, then known as Euclid, as pastor of the Church; and, in 1850, on the founding of the Western Reserve Eclectic Institute, at Hiram, Ohio, the Board unanimously elected him Principal of the seminary. Under his administration, seconded by able assistants, the institution rose to great strength and prosperity. After holding that position seven years he resigned, and returned to Collamer. The next year he was elected Principal of the McNeely Normal School, at Hopedale, Ohio, and accepted, laboring there for one year in the double capacity of Principal of the school and preacher for the Church. He resigned in August, 1859, and returned to his Church in Collamer, which had been constantly urging him to resume his labors among them. He has been located at that point ever since, where he is greatly beloved by the entire community. Excepting the periods already mentioned, that has been his principal field of labor for twenty-seven years, presenting a rare but instructive example of permanency in the work of the ministry.

He has also been quite successful as a musical composer and publisher. He is the author of the first compilation of church music published among the Disciples. It appeared when he was only twenty-one years of age, and was much sought after. It was a great benefit at the time, in furnishing runes for the use of the infant churches. He has published several musical works since, one of which, the "Sacred Melodeon," has run through many editions, and had an extensive sale. He was also one of the committee that compiled the new edition of the "Christian Hymn Book," and, in the preparation of that work, rendered valuable assistance.

Brother Hayden is distinguished for large conscientiousness, intense delicacy of feeling, earnest religious convictions, and great purity of life. He is a model Christian gentleman, an excellent pastor, and a scholar of no mean attainments.

His religious convictions were early and deep. His parents were members of the Baptist Church, and he was brought up in that belief, but was never satisfied with the doctrines of that church. In his fifteenth year he heard the gospel preached by Walter Scott, by whom he was immersed, and soon after began to speak in public. In 1832 he began to hold protracted meetings. In 1840 he located with the church at Collamer, Ohio, as its pastor, and in 1850, when Western Reserve Eclectic Institute was founded, at Hiram, Ohio, he was unanimously elected its Principal. After seven years successfully devoted to that work, he resigned, and returned to his church work in Collamer.

Early in 1808 he accepted a call from the church at Eureka, Illinois, where he spent three years in earnest, faithful work in the congregation and among the college students. He was a man of refined nature and of fervent devotion, and his influence always and everywhere was excellent. He was much beloved for his work's sake. In 1871 he again returned to Collamer, where he spent the remaining ten years of his beautiful, useful life, ministering to the church. with which he had lived so long, then entered into his rest.

Directions To The Grave Of Amos S. Hayden

A.S. Hayden is buried in the East Cleveland Township Cemetery, in Cleveland, Ohio. It is located at East 118th Street. In downtown Cleveland take I-90 north toward the lake, and exit off Exit 123b. Hwy. 322. and turn right. Take first right on E.30th St. and go one block. Turn left (east) on Hwy. 20. Go about 3.6 miles and turn left on East 118th St. Cemetery is on the right. The cemetery is open from 8am to 4pm. See 431k map of grave location in Cemetery here! 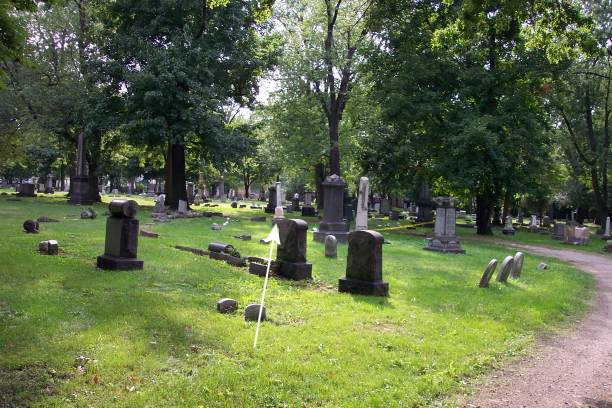 Hayden Grave In Center Of Cemetery 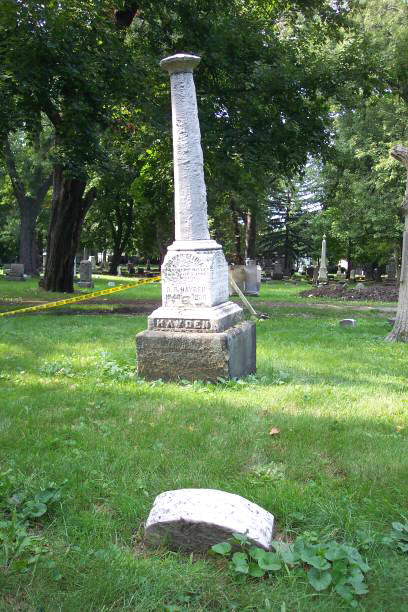 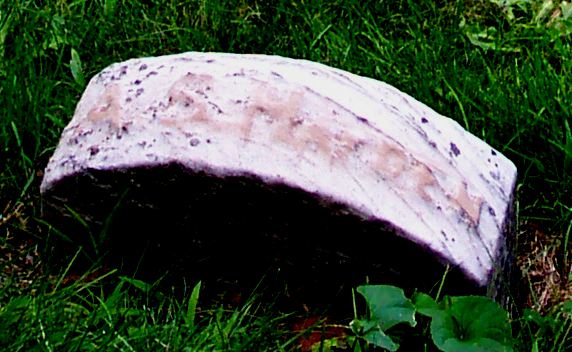 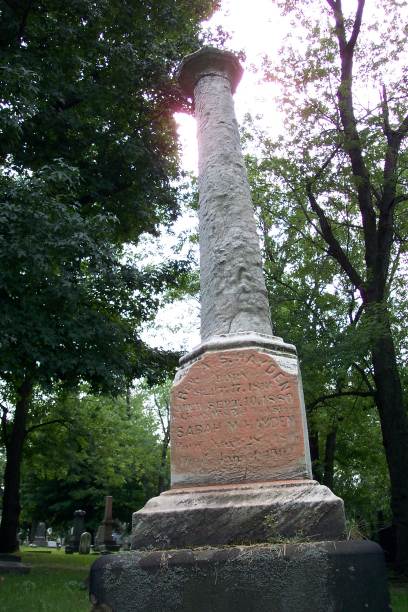 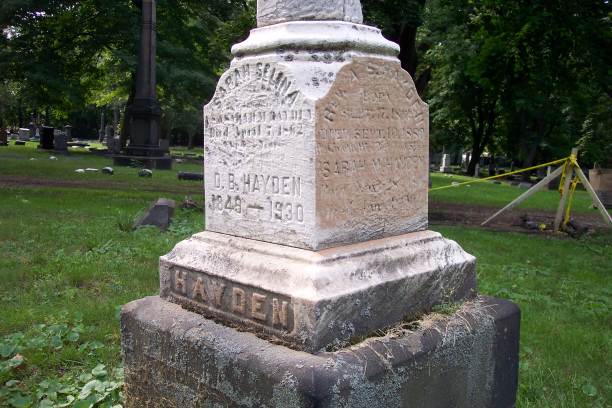 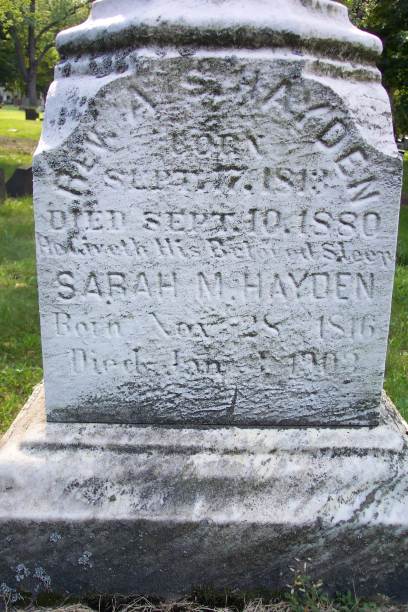 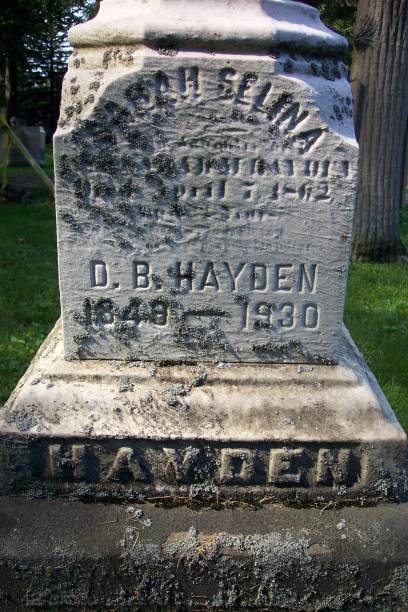 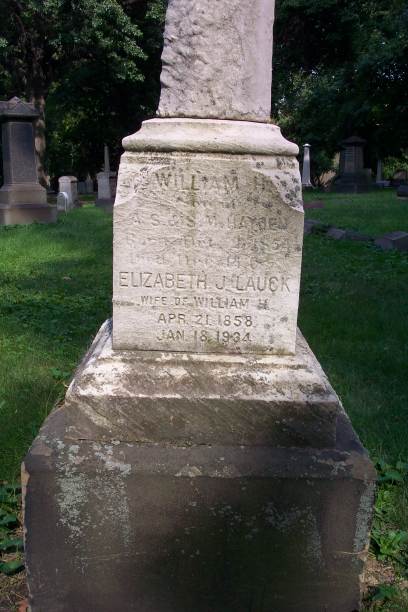