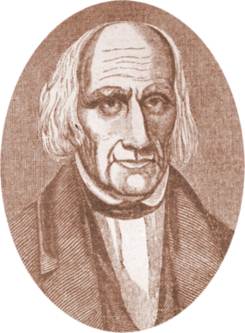 Biographical Sketch On The Life Of David Purviance

The subject of this sketch has so completely dropped out of notice that it is refreshing to call such a humble, faithful servant of God back to the attention of the present generation. His work along with that of other pioneers was an important work, and he should not be forgotten.

David Purviance was born on November 14, 1766, in Iredell County, N. C. His father was a colonel in the Revolutionary War. The family moved to Sumner County, Tenn., in 1791. Soon after the arrival of the family in Tennessee, John Purviance, a brother of David, was killed by the Indians while he was in the field at work. The Indians were so hostile and savage in their attacks upon the white settlers that Colonel Purviance moved with his family to Cane Ridge, Bourbon County, Ky., where they settled on a farm and went to work.

A great religious awakening took place in Kentucky and Tennessee about that time. The Purviances were of the Presbyterian faith and were greatly affected by the religious revival of that period. One presbytery broke away from the old, established rule of the church and began to license many uneducated men to preach. This caused a rupture in the Presbyterian Church and resulted in the formation of a new branch of Presbyterians, called the "Cumberland Presbyterian Church." This new sect grew for a few years very rapidly in many parts of Kentucky and Tennessee. The Purviances espoused with zeal the faith of the new sect.

David Purviance received a good education, the best that the country afforded at that time. He war, instructed in Greek, Latin, and the higher branches of learning by Dr. John Hall. He married and settled on a farm near Old Cane Ridge Church. While he was pious in his youth, he did not want to preach, but his ambition was to be a statesman. He was frequently elected to the Kentucky Legislature from Bourbon County. Though he had the rough exterior of the backwoodsman, he was a leader among men. He loved humanity and was interested in community life which would help his fellows.

While in the Kentucky Legislature he came in touch with such famous statesmen as John Breckinridge, Felix Grundy, William Garrard, Col. Samuel Burke, and James Garrard, the latter of whom later became Governor of Kentucky. He frequently met in debate John Breckinridge and Felix Grundy, and it is said that he met these young and polished statesmen - without fear, and often defeated them in debate. They learned to respect the ability and integrity of David Purviance and became his warm friends. He was loved by the people because he became the champion of their welfare. He was enthusiastic in all that he undertook to do.

He was an emancipationist, like Clay and others, and fought the institution of slavery with all his might. He saw, with disgust, slavery fastened on the State. He was a candidate in the election for delegates to frame a new constitution for Kentucky. However, he was defeated because of his opposition to slavery. While he was not elected to the constitutional convention, he was reelected to the Legislature. To the surprise of his friends, he abruptly withdrew from politics and began preaching "the unsearchable riches of Christ." He joined Barton W. Stone in preaching the simple gospel as revealed in the New Testament. He knew that he could not preach the gospel and remain in politics. Though he stood very high in the estimation of his own people and had flattering prospects for future progress in statecraft, yet, like Moses, he turned from all of these and resolved to spend his life in preaching the gospel. In 1803, he, with Barton W. Stone and others, seceded from the Presbyterian Church, and shortly after this helped to establish a church which worked and worshiped according to the New Testament pattern. He helped to perfect the work of the old Cane Ridge Church. It should be remembered that this was some years before Alexander Campbell began to preach the full, simple gospel as revealed in the New Testament. David Purviance became an elder in the Cane Ridge Church and was ordained by it to preach. It is claimed that be was the first preacher that publicly repudiated infant baptism and insisted that immersion in water of a believing penitent is the only baptism taught in the New Testament.

David Purviance was one of the drafters and witnesses of that famous document, "The Last Will and Testament of the Springfield Presbytery."

In 1807 he moved to Ohio. He had not been there long until he was elected to the Ohio Legislature; and he was a power for good there, as he had been in Kentucky. He was always a friend of the poor and oppressed and watched with a keen eye the interest of the unfortunate. He did not give his full time to preaching the gospel. He always had a desire to carry out his early ambition to be a statesman, and this kept him from giving to church work the best that was in him. Some one has said that the church has never had a man "who could serve Caesar and God so evenly and justly as David Purviance." John T. Johnson gave up political life because he could not serve both. James A. Garfield was a great preacher; but when he became a politician, he gave up preaching the gospel. No one today can be, a successful preacher of the gospel and be a politician. The two will not mix. He who becomes a success in politics usually does so at the expense of his spiritual welfare.

David Purviance was known as a mighty prophet of God--a Samuel for God and truth. He was a loyal friend to Barton W. Stone and helped him as no other man did in getting the ancient gospel clearly before the public in that section of the country. He met Barton W. Stone for the last time at New Paris, Ohio, in 1843. When they met in the church house, they embraced each other, and the whole congregation was moved to tears as these two heroes of the simple truth of the gospel fervently engaged in this act. Barton W. Stone and David Purviance did more than any other two men in establishing the cause of primitive Christianity in Kentucky and Ohio. We should give honor to whom honor is due and not forget this early hero of the faith.

David Purviance died on August 19, 1847, at the age of eighty-one. He had endured many hardships, fought many battles for the truth, and won many victories for our Lord. There were truly giants in the church at that time, and David Purviance was one. 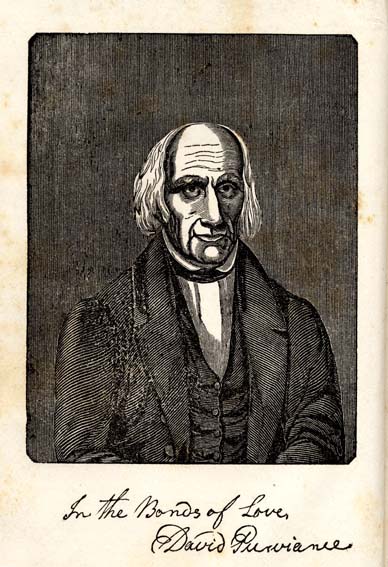 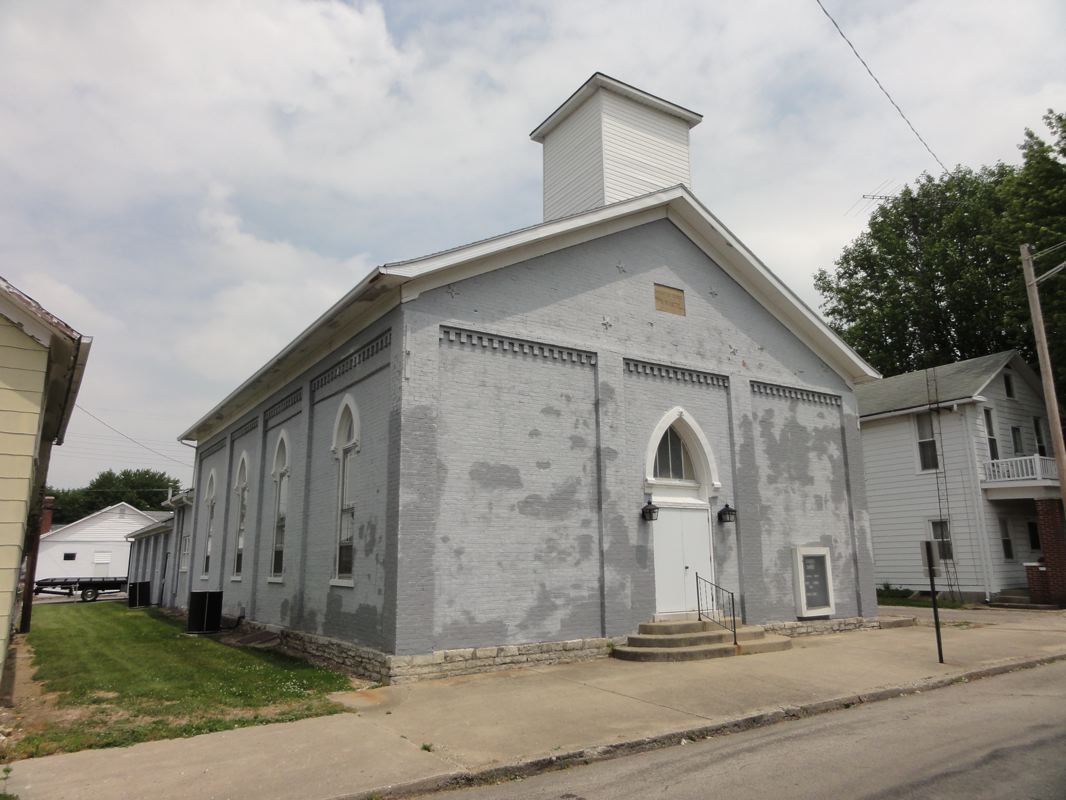 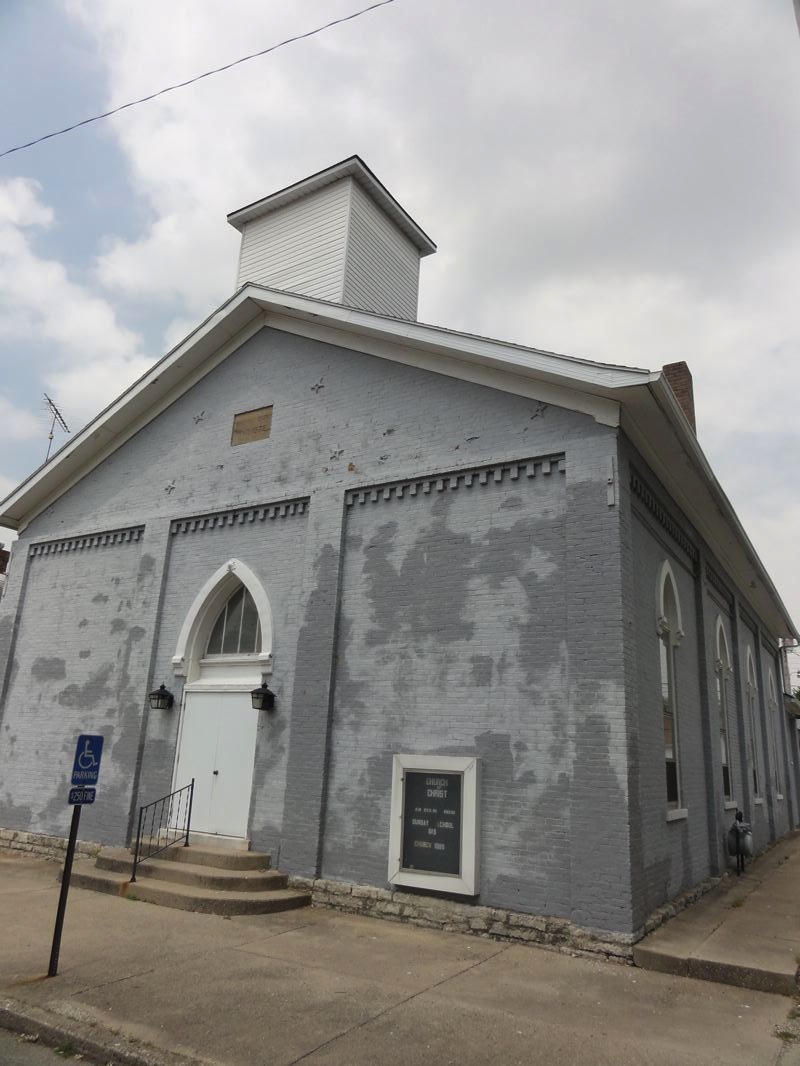 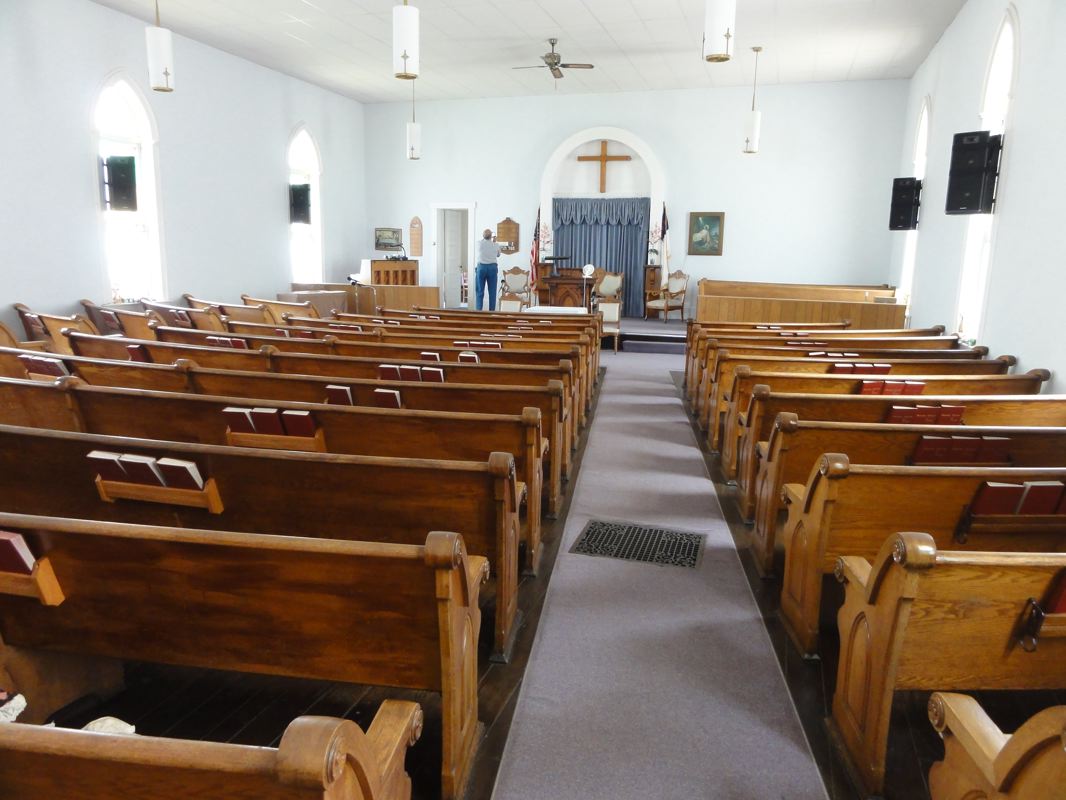 Tom L. Childers taking photos at the front of the auditorium during visit in May, 2012 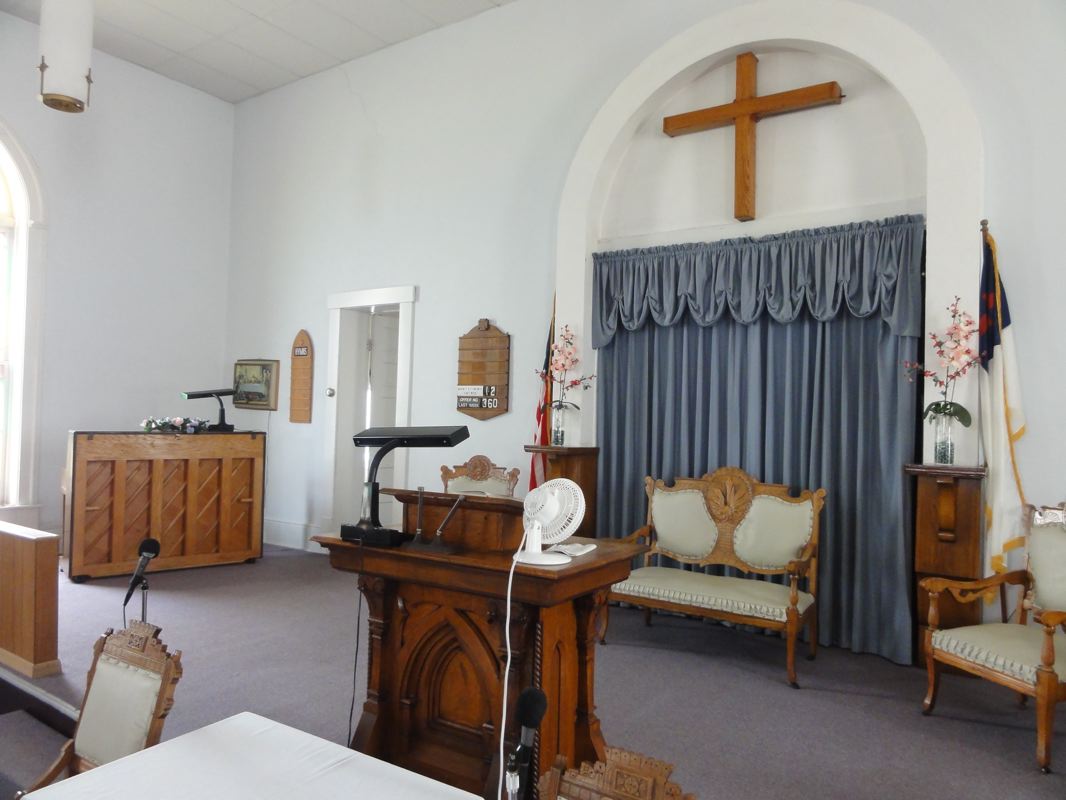 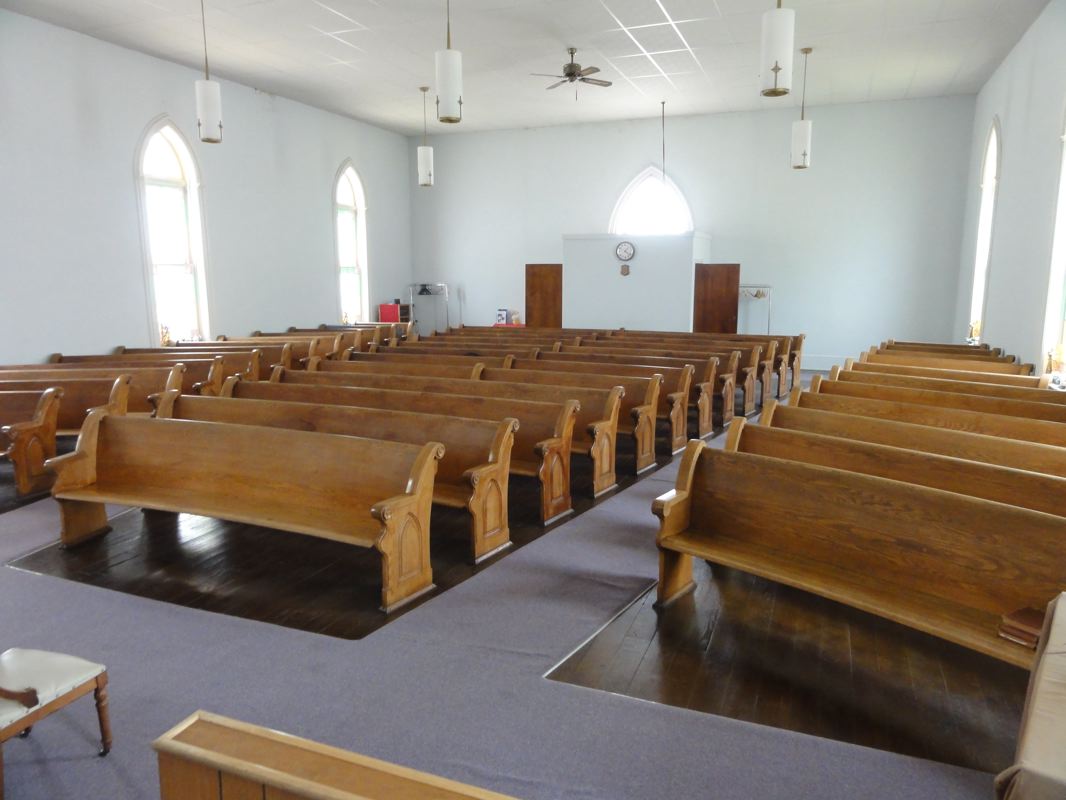 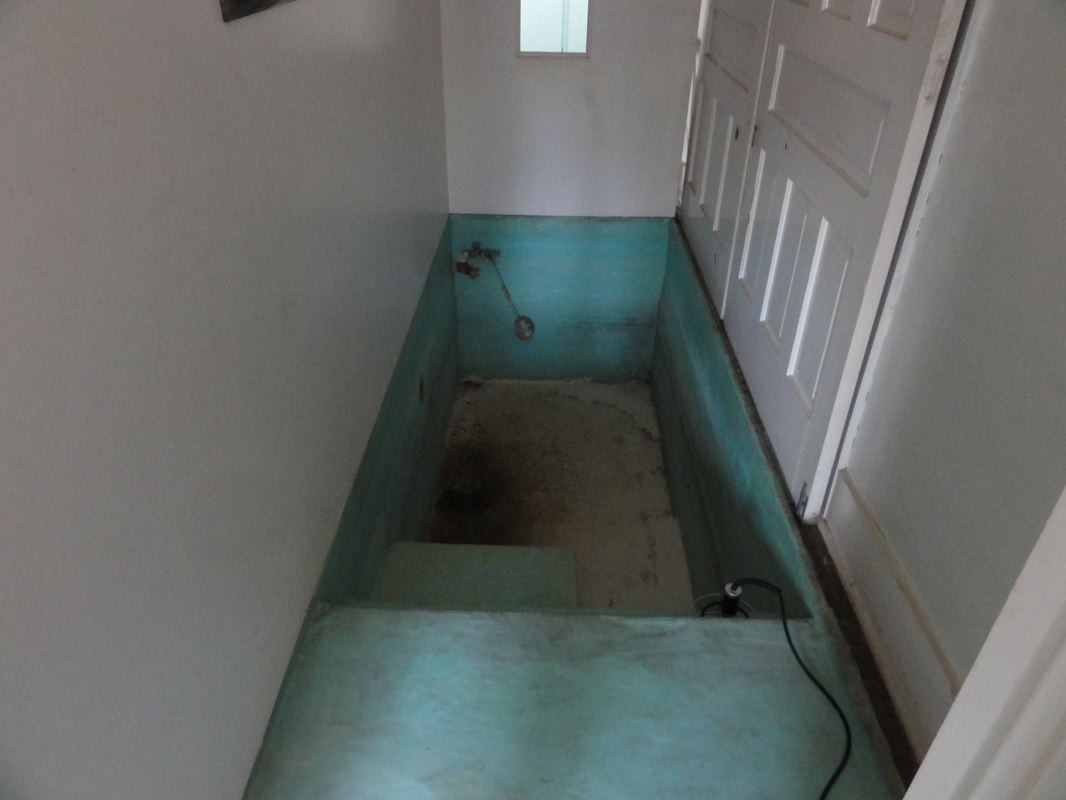 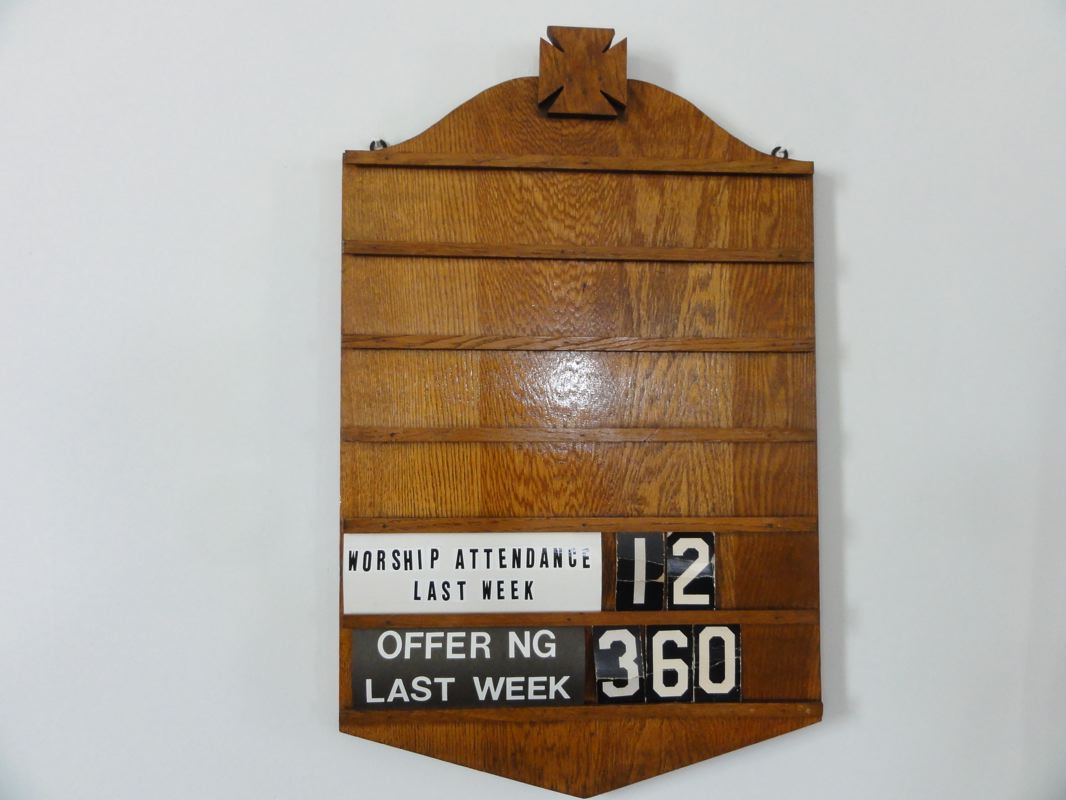 Location Of The Grave Of Elder David Purviance

David Purviance is buried in the "Old Graveyard," now called Old North New Cemetery in New Paris, in the most western part of Ohio. On I-70 take exit 156. Just north of exit head east on Highway 40 National Road E. Turn left on Hwy. 320 and head north to New Paris. Cemetery is located on the north side of town. There is a marker there to identify the location of his grave. There is a map above of the location of the church building and cemetery. The photos below are of the grave. I had the joy of visiting New Paris in September of 2005. I took some of the photos you see below. However, special thanks are extended to Mr. & Mrs. Paul Garrett of Barberton, Ohio for sending some of the pictures and map you see on this page. 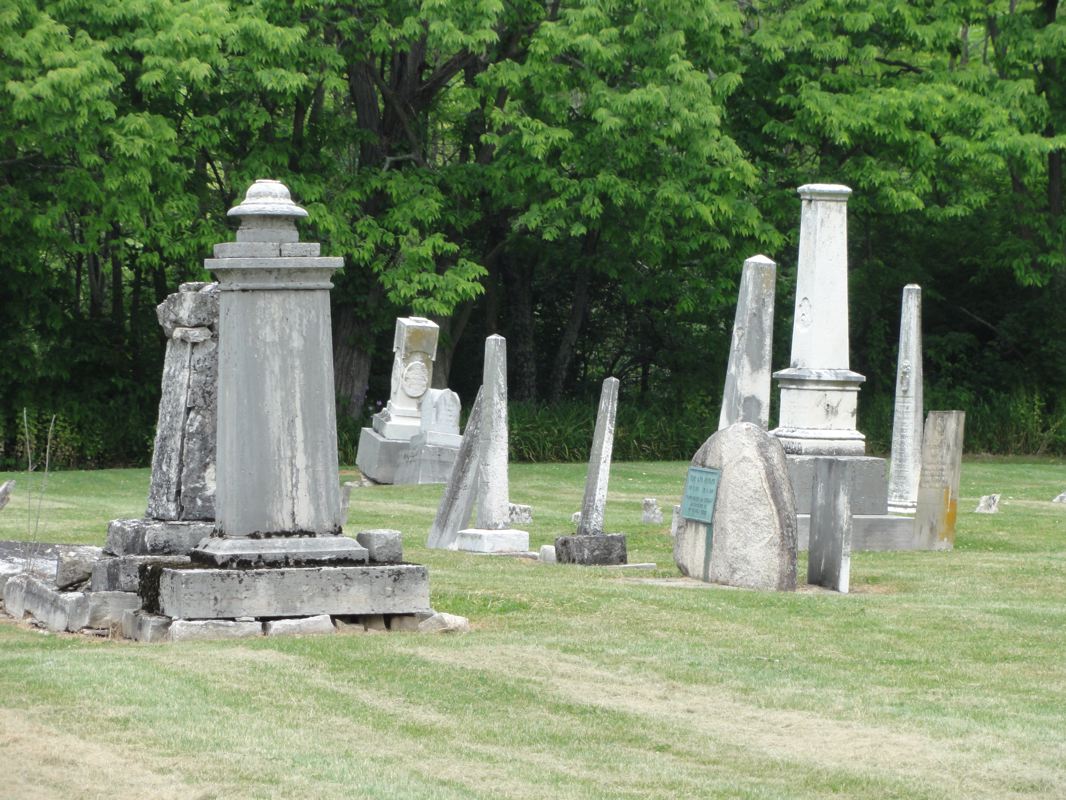 The Purviance Family Plot in the Old Graveyard In New Paris, Ohio
Many stones are now unrecognizable 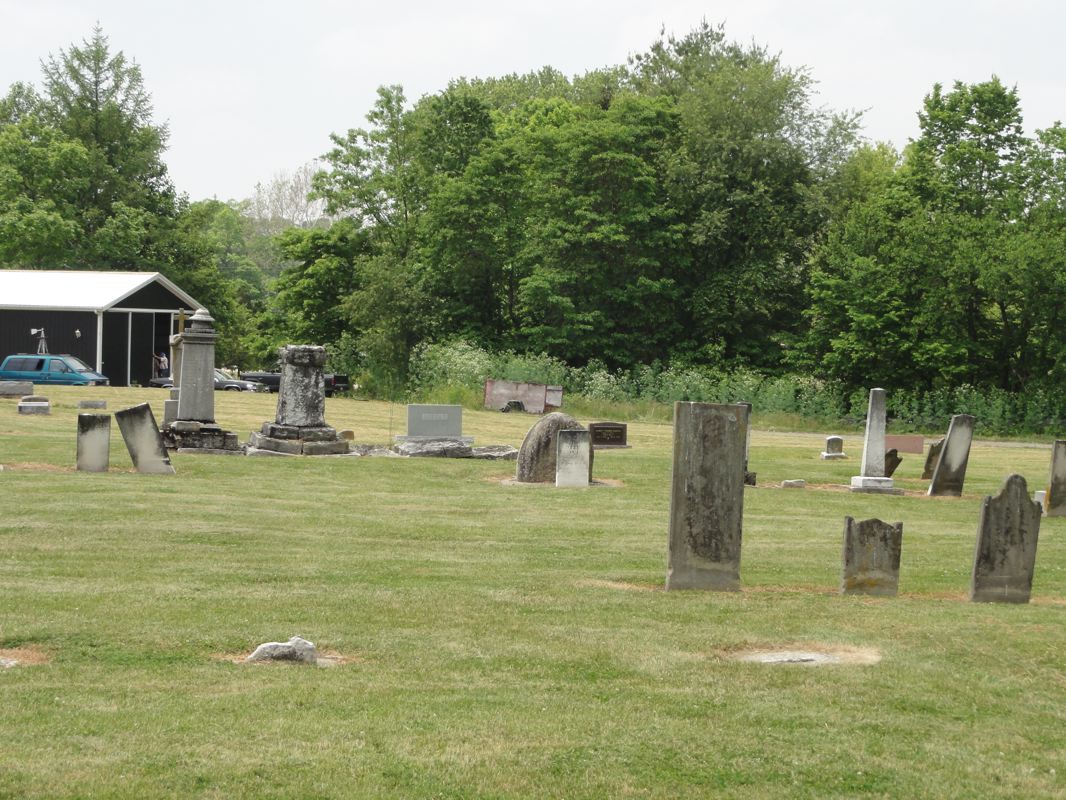 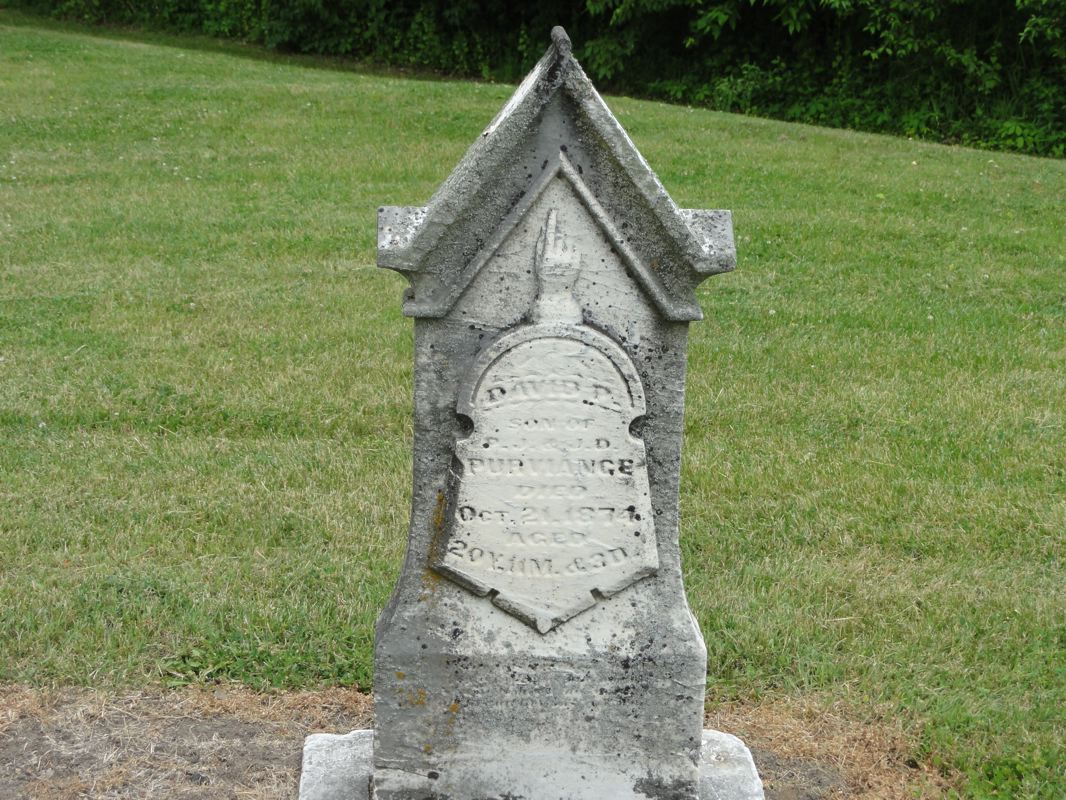 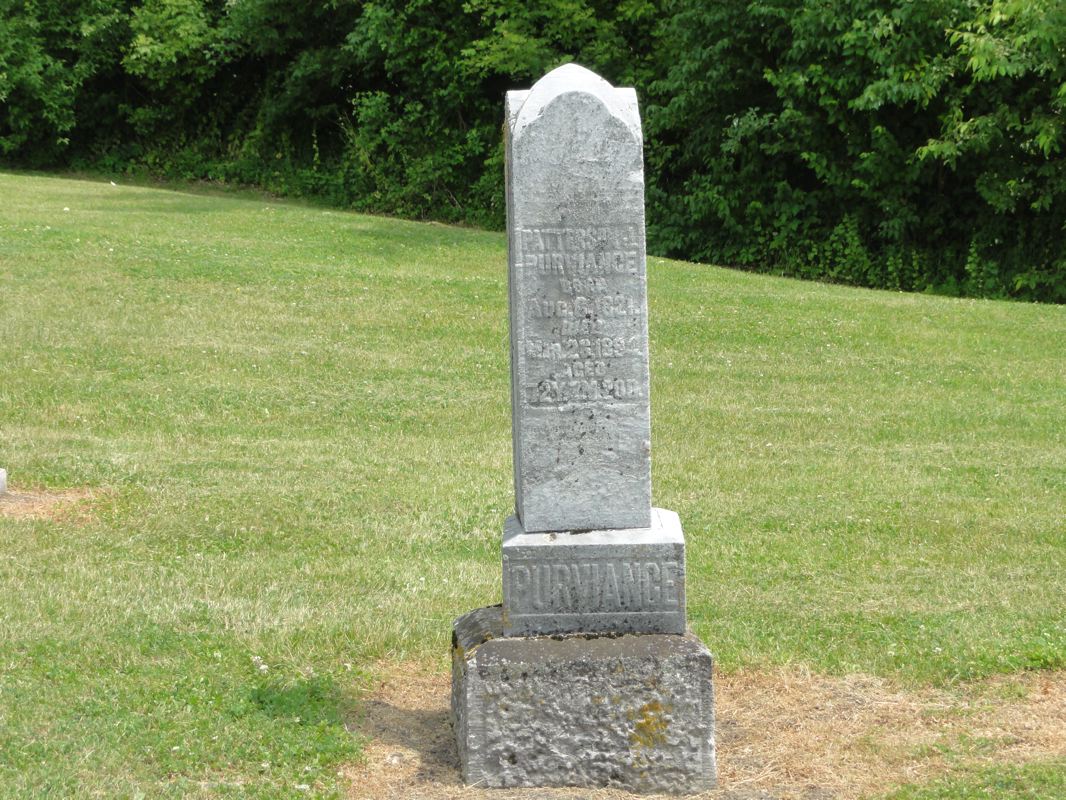 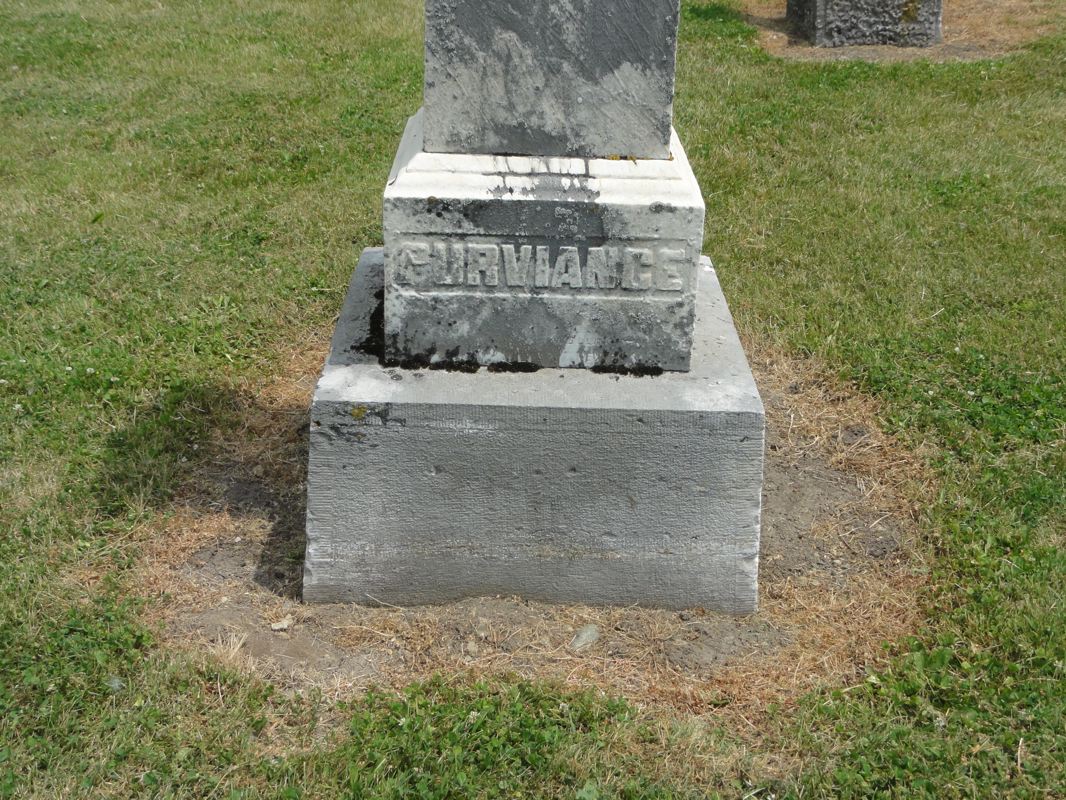 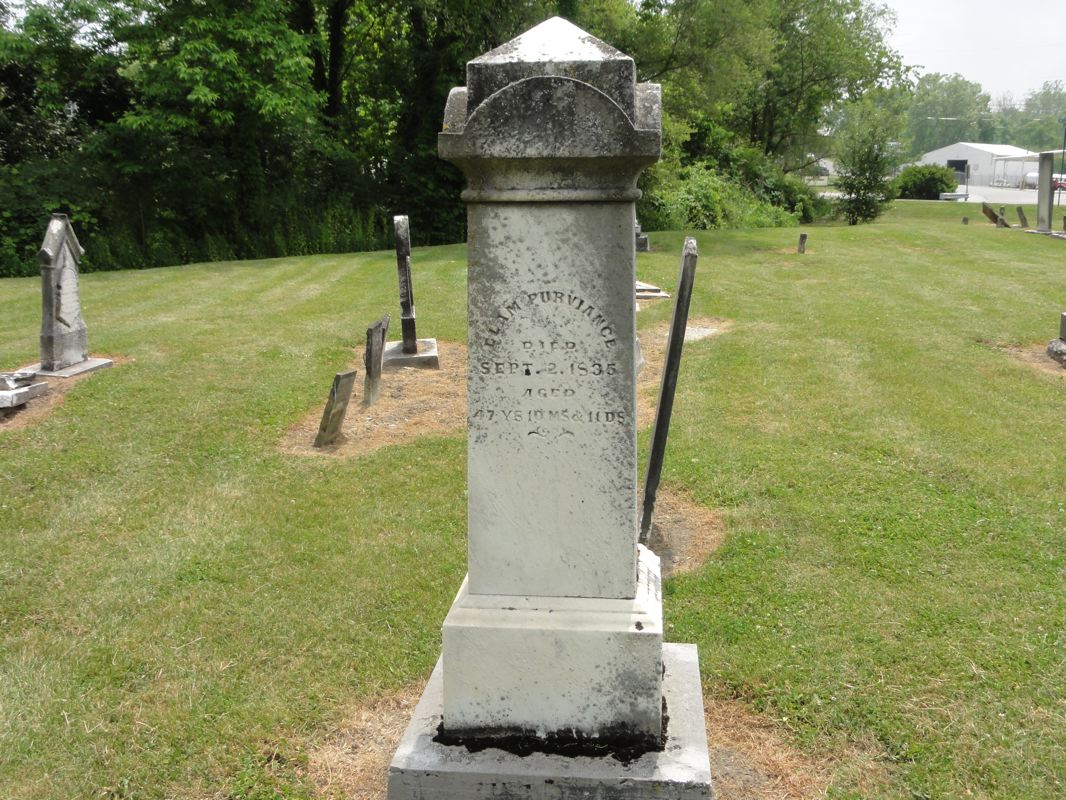 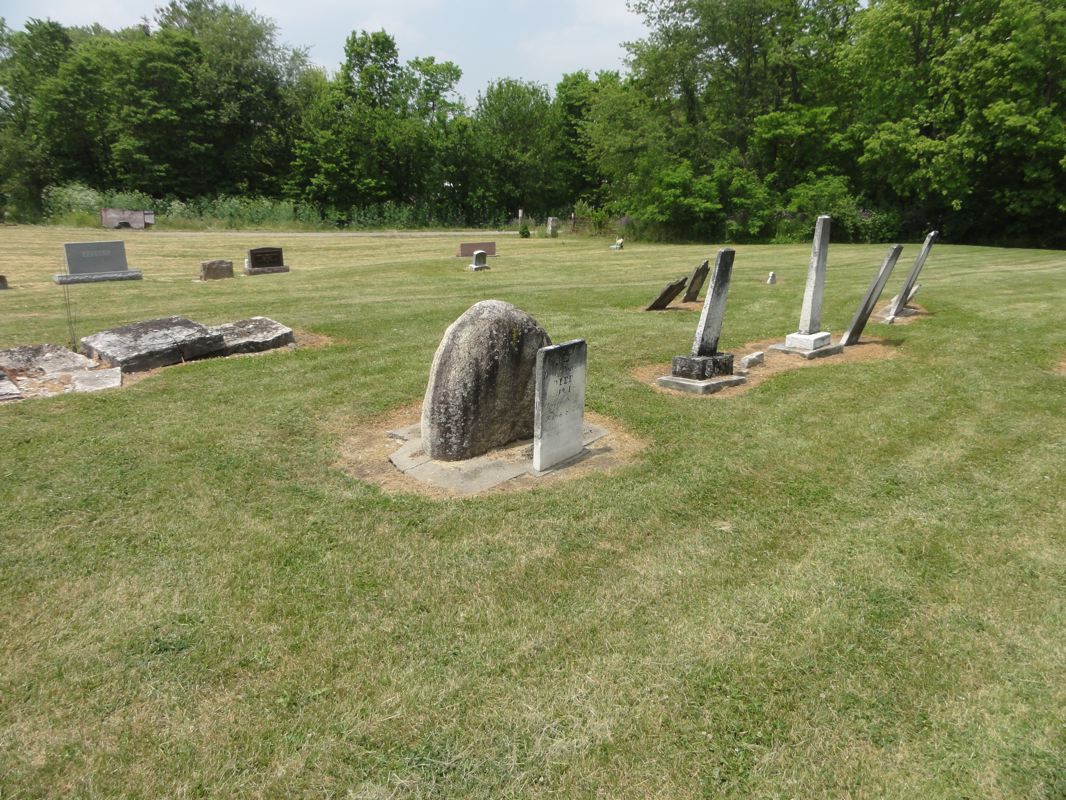 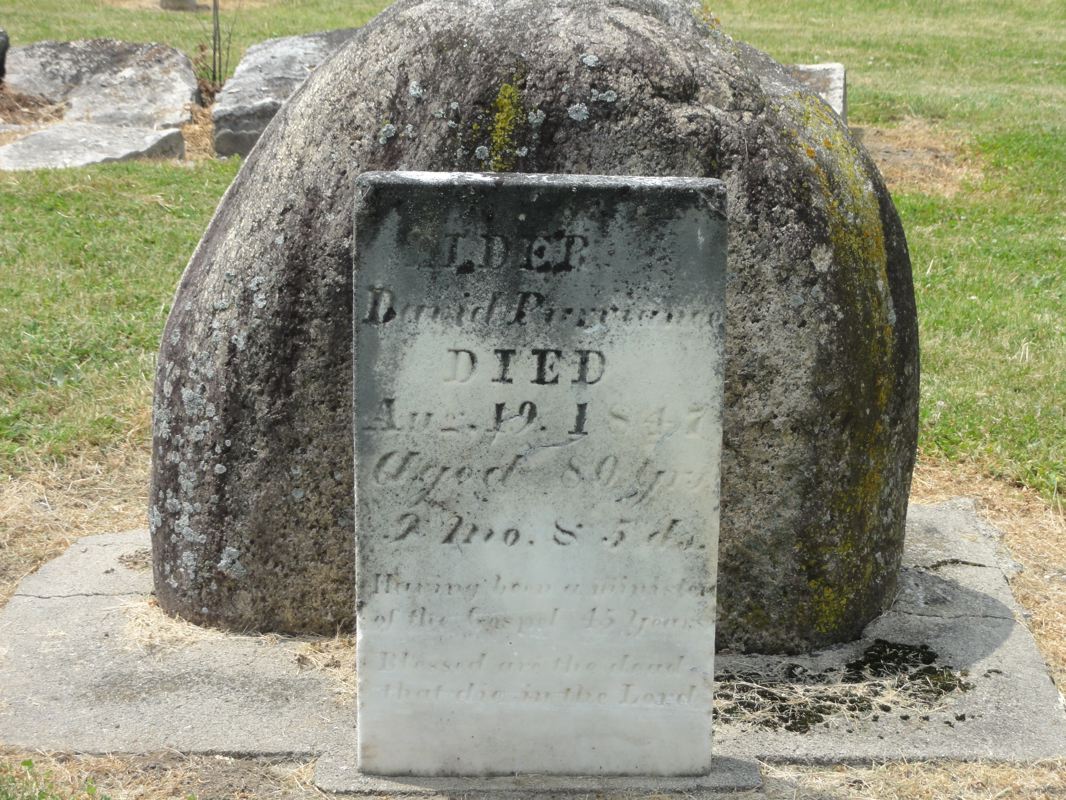 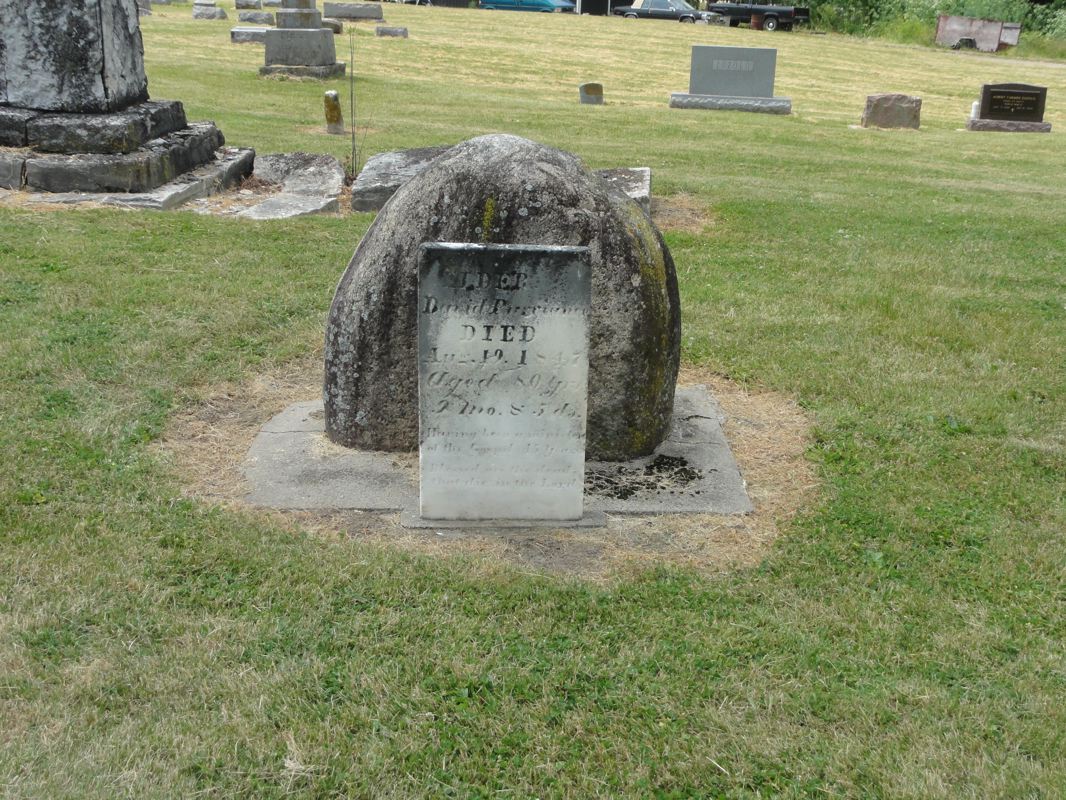 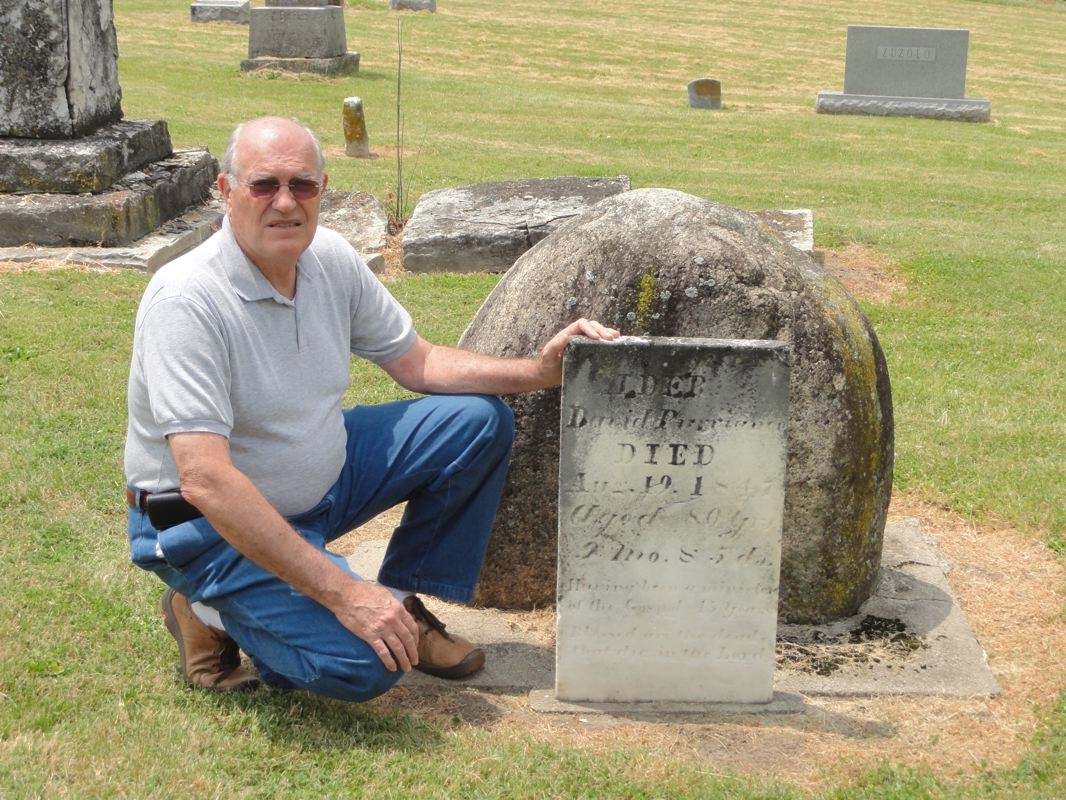 Tom L. Childers at the grave of David Purviance 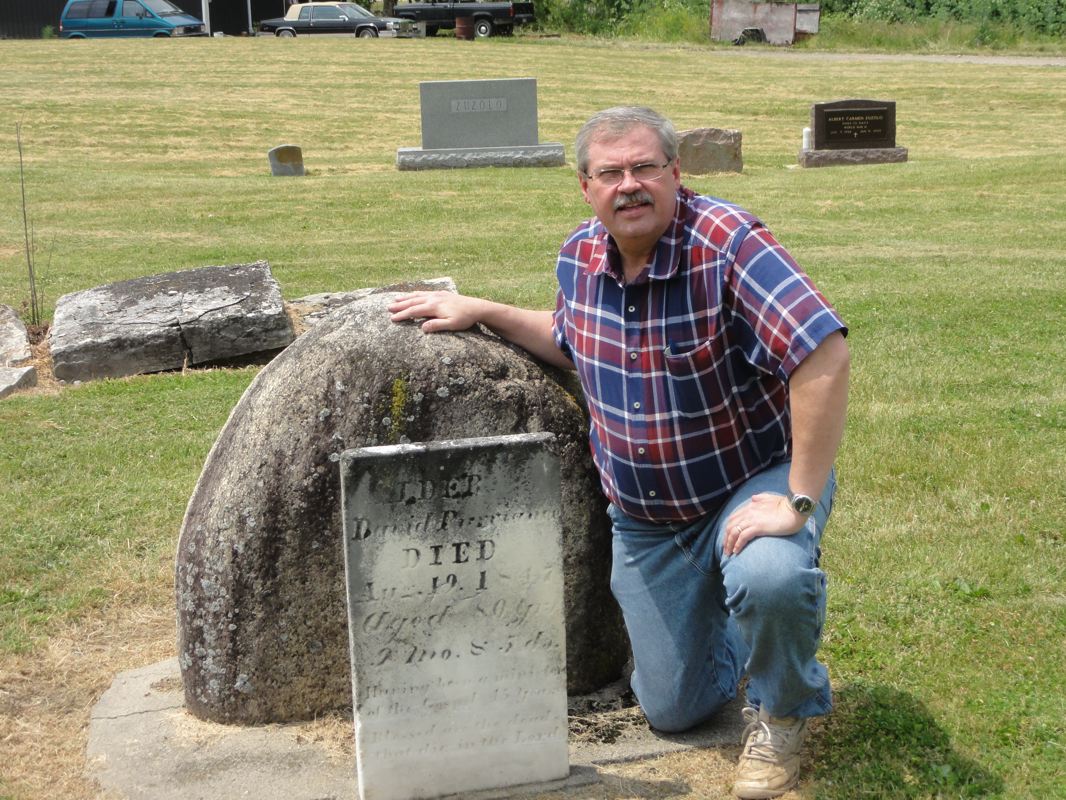 Scott Harp, Webeditor, at the grave of David Purviance, May, 2012 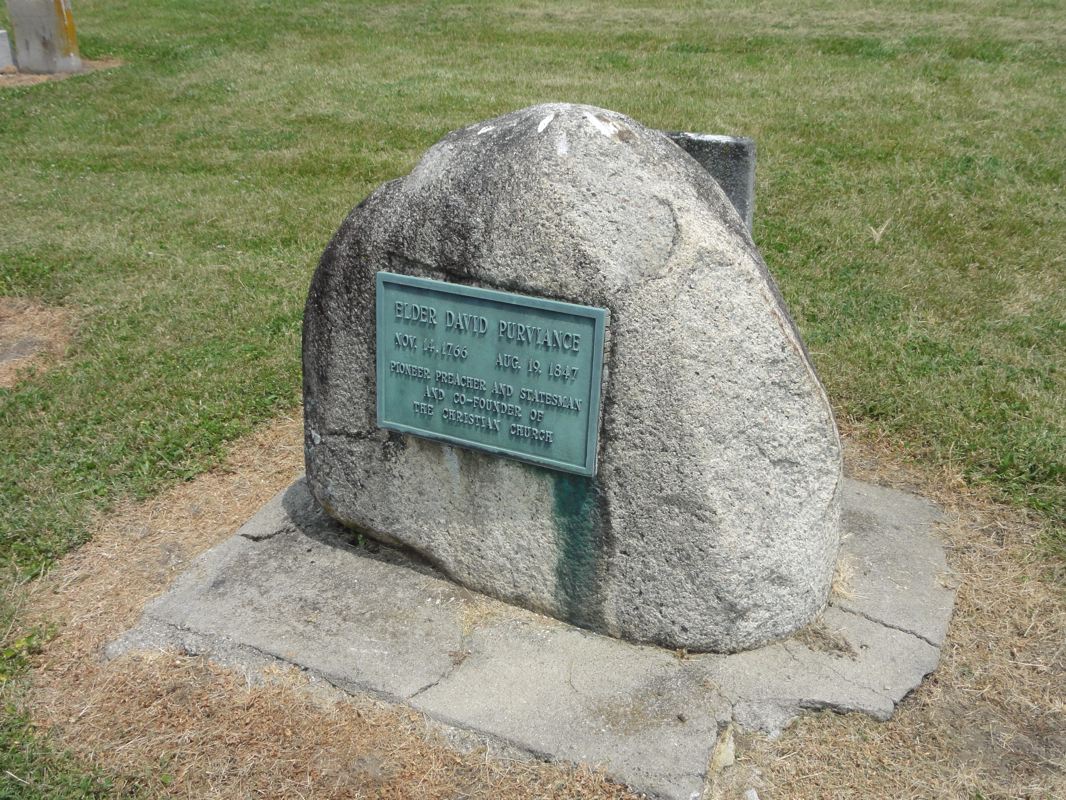 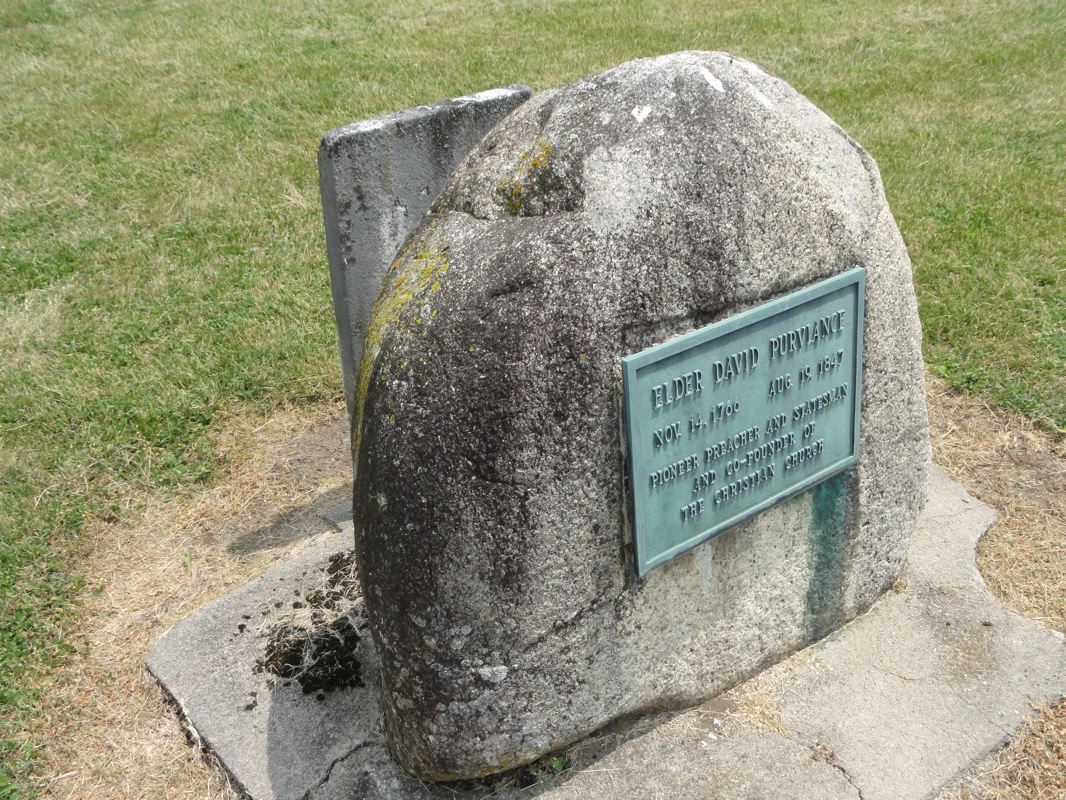 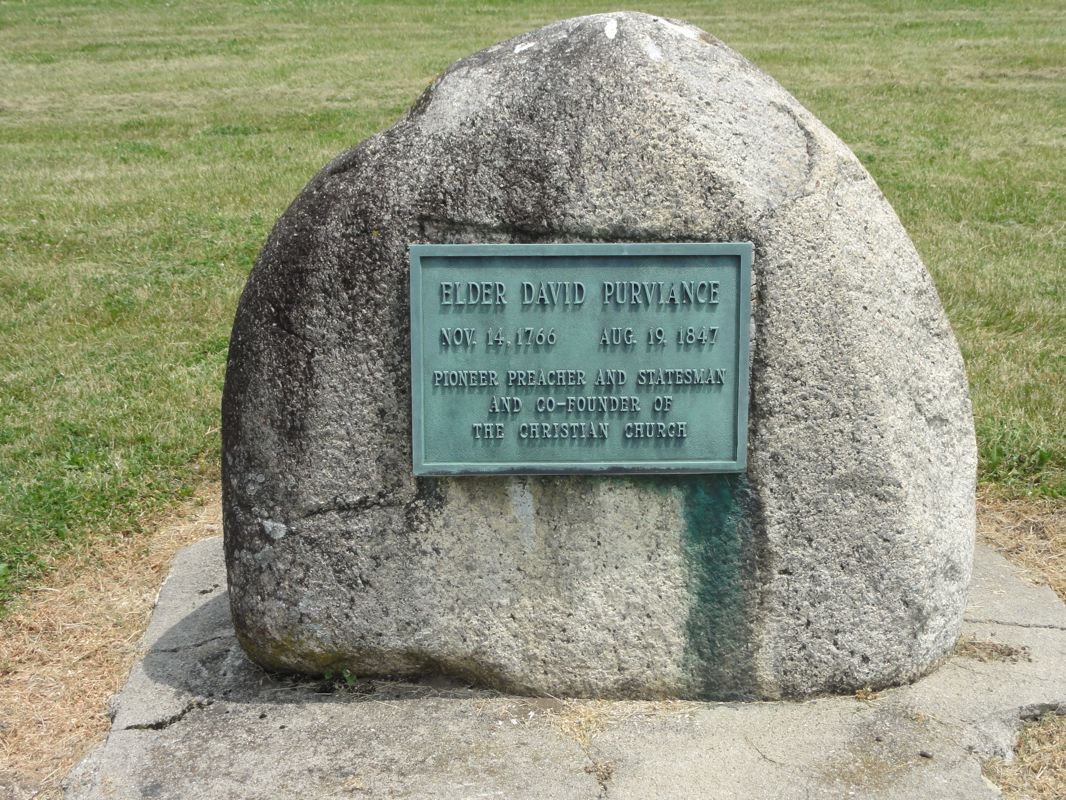 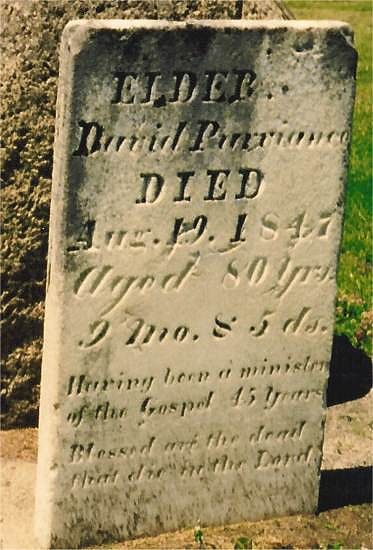 Having Been A Minister
Of The Gospel 45 Years

Blessed Art The Dead
That Die In The Lord.