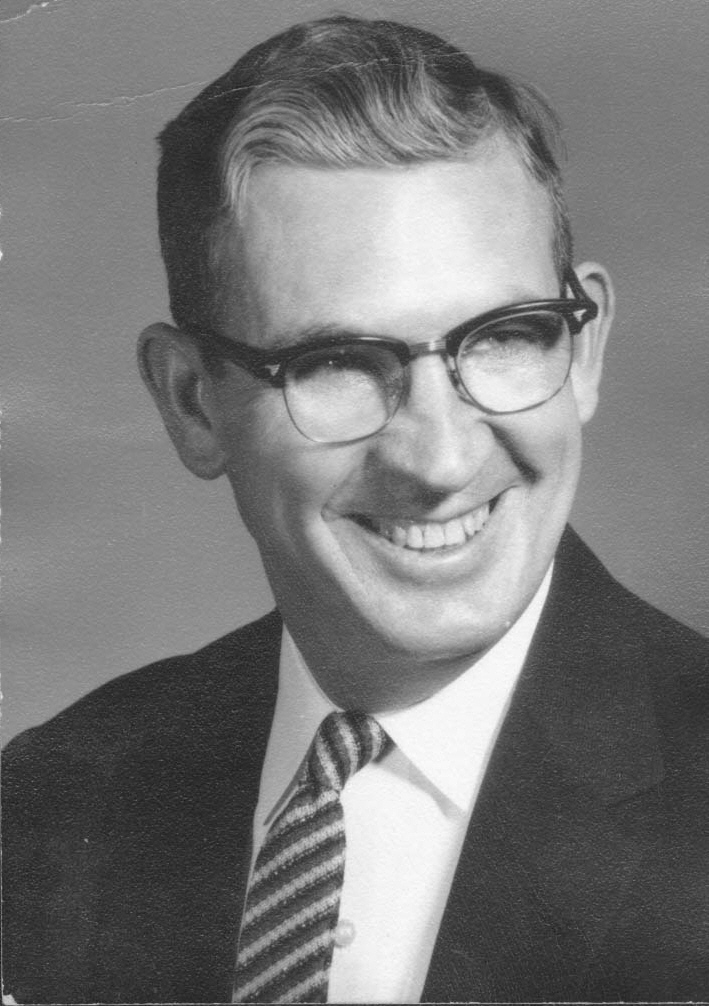 A Sketch On The Life Of Arthur Davis 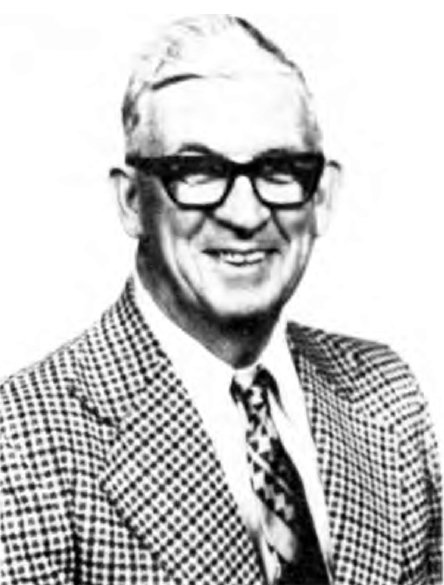 Arthur Page Davis was born on a farm near Itasca, Texas on December 20, 1911, of W. Arthur and Sarah Jane Davis. Seven sons and one daughter were born to them. Two of the children died in infancy, and at the time this article was first published only the daughter, Mrs. Archie Davis, and one son, Wm. Kenneth remained. (In 1979 James Lee, another of the sons, lost his life in a tractor accident.) In 1917 the family moved from Itasca to Cold Springs in Kiowa County, Oklahoma, where Arthur grew up. A new lake that has been built between Roosevelt and Mt. Park now covers the Davis farm. The entire family, including the parents, were faithful and active in The Lord’s work, with the father serving at Cold Springs as an elder, and his brother Kenneth long a “pillar” in the Roosevelt church.

We do not know when Arthur decided to be a preacher, but perhaps he was like most boys who grow in the right environment, “always had it in the back of his mind.” In 1929 he obeyed the gospel under the influence of the lamented W.M. Mann, who ran a cotton gin in Cold Springs and preached the gospel. Brother Mann did encourage him to preach, and no doubt had much to do with his final decision in the matter, He attended Star Valley, a rural school near their home, then Cold Springs and finished High School in Roosevelt, graduating in 1930. After this he went to Abilene Christian University, where he graduated in 1936. In 1932 he “preached his first sermon” in his home congregation at Cold Springs. While in school in Abilene he often preached at nearby places, doing so at every opportunity. (Brethren who provide such opportunities for young men seldom know how much good they are doing.)

I first became acquainted with him while he was still in school in Abilene. I went to Cold Springs to conduct a meeting. He came home to be with us in the meeting, and together we worked to reach the lost in the community. He was a devout Christian, and it was a pleasure to be with him. Our friendship continued to the end of his life, and one of my most enjoyable meetings was with the Mt. Home, Arkansas church while he was working with them. He had things ready for a good meeting and we had one, baptizing quite a number of people. The last time I saw him he talked much about these “preacher stories” being published in the Christian Worker. Little did either of us imagine that soon I would be writing one about him. He urged us to put these stories in book form so they can be preserved. He was then talking with Brother Lloyd Connell and me about this and Brother Connell asked about his personal support for such a venture, and he promptly replied with a very generous offer. He practiced what he preached.

He was married to Miss Joye Eloice Bryan, of Roosevelt, Oklahoma on September 29, 1938 by Paul Southern in Abilene. Her parents were Ernest and Lillian Bryan, faithful Christians, and also parents of Alvis Bryan, one of our faithful preachers today. Three daughters were born to them. They are: Gloria (Mrs. I. V.]. Melton, Sheila (Mrs. Donal Eastam), and Merry Lynn (Mrs. Mike Weatherby). Joye worked faithfully by Arthur’s side, and together, they made a “good team.” They were getting ready to go to California for some special work when she became ill. She was taken to the hospital in Winfield, Kansas, where they were living, and died suddenly following surgery on July 27, 1956. On August 5, 1957 Arthur was married to Renna Lee Harrison, of Ft. Worth, Texas by F.F. Conley in Electra, Texas. Her parents were Isaac and Rosa Lee Cooper, and she too had been reared in a Christian home and had been faithful since her obedience to the gospel. No children were born of this union. She and Arthur worked together in every possible way, and they enjoyed their work for The Master. After Arthur died, she said: “We had a beautiful relationship and had been honeymooning almost twenty two years.” One could not be around them without being aware of this “beautiful relationship,” for it was obvious that they loved one another and their work. What a blessing for both of them!

Following graduation from A.C.U. he worked with the Penalosa, Kansas church, then with The Church in McPherson. He went back to Texas for a period of work with the Lipan church, but most of his life was destined to be spent in Kansas, and he was next with the Dodge City church, where he worked for about four years, and here did much radio work. From Dodge City he returned to Oklahoma, working with the congregation in Elk City, and again did much radio work. Pratt, Kansas was next, followed by Winfield, where he was living when he lost Joye. From Winfield he went to Mt. Home, Arkansas in the beautiful Ozarks for a profitable work of five or six years, then to Dill City in Western Oklahoma. (This was the closest he ever lived to his parents home.) From Dill City he went to St. Johns, Kansas where he preached until 1970. They moved to Liberal, Kansas and worked with the Fourth and Grant Sts. church for about six years, when he “retired” on Social Security. Though he had “retired” he did not quit preaching. The elders of the Western Ave. church in Liberal did not want him to leave Liberal, so they engaged him as “associate minister.” He filled the pulpit when needed, taught the auditorium class on Sunday morning, and usually gave a short devotional on Wednesday evening after the classes. He also preached when needed in nearby churches. He had expressed the desire to preach as long as he could, and with this arrangement he was quite happy and kept busy. He had always conducted many meetings in Kansas, and this work continued. They bought a home in Liberal, and when he died, she continued there, and The Church was careful to see to it that she had plenty to live on. (That’s Christianity!) He had been quite active in the bus work, and loving children as he did, this was especially pleasant to him. He was interested in mission work and helped in one special effort in Salt Lake City, when he went there to help with the door knocking. He was also there for the Catewood-Farnsworth debate, and felt that much good came from these efforts.

In May of 1979 they started to California where Sister Davis’ brother was seriously ill. They spent the first night with their daughter, Merry Lynn, in Dumas, Texas. The next morning, May 7, when he was called for breakfast, he did not respond. The Lord had called him “up higher.” Apparently, he did not suffer, he just had a heart attack and died. Though the Doctor had given him the usual advice about “taking care of himself,” it was not known that he had any heart problems. Two services were conducted. The first being in the Western Avenue meeting house in Liberal, conducted by F.F. Conley, Tom Bedichek, and Leon Talley. The body was taken to Frederick, Oklahoma, where Joye had been buried, and the final service was conducted there by Glen Walton, Alvis Bryan, and LeMoine Lewis, his room mate for the four years he was a student in Abilene Christian University. Arthur Davis was a faithful Christian and a faithful preacher of The Word. He has now been gathered to his father to be with the redeemed forever. Blessed be the name of The Lord!

Arthur Page Davis, 67, of Liberal, Kansas, died May 7 of a heart attack at the home of his daughter, Merry Lynn Weatherby, in Dumas, Texas. He was born December 20, 1911 in Itasca, Texas to William Arthur and Sarah Jane Davis and was raised on a farm near Roosevelt, Okla.

He was baptized by W.M. Mann at his boyhood church of Cold Springs, Oklahoma, where he began preaching when he was 21. Following graduation from Abilene, Texas Christian College in 1936, he devoted his life to preaching mostly in South Central and Southwestern Kansas. At the time of his death he was serving as associate minister for the Western Avenue Church of Christ in Liberal, Kansas.

Services will be at 10 a.m. today in Western Avenue Church of Christ with F.F. Conley, minister from Elk City, Okla. officiating.

A second service will be at 10 a.m. tomorrow in Frederick, Okla., Church of Christ. Burial will be in the Frederick Cemetery by Roberts Brothers Funeral Home of Hooker, Okla.

-Source: This information came from Find-A-Grave. At the bottom of the page it notes that the obituary was submitted by Sandra C. Hayes, Descendant of Joseph and Sarah (Fuller) McDaniel, Sr. Special thanks to her and the picture that is located on that site.

Directions To The Grave of Arthur P. Davis

A.P. Davis is buried in the city cemetery at Frederick, Oklahoma. Frederick is locate SW of Lawton, Oklahoma on Hwy. 5. From Lawton, head west on Hwy. 62. At Snyder, head south on Hwy. 183. At Frederick head to the center of town and turn right on Hwy. 5, W. Gladstone Rd. and head out of town. Go about a mile and turn right on N2200 Rd. (There should be a Frederick Cemetery sign on the highway). Go out that road and enter Frederick Cemetery at the main entrance (E Ave.) and head to the far rear of the cemetery. Turn left (6th Street). Stop at the second section on the left, (cnr. of D Ave and 6th Street). The Davis plot is near the road in the NW corner of the section. 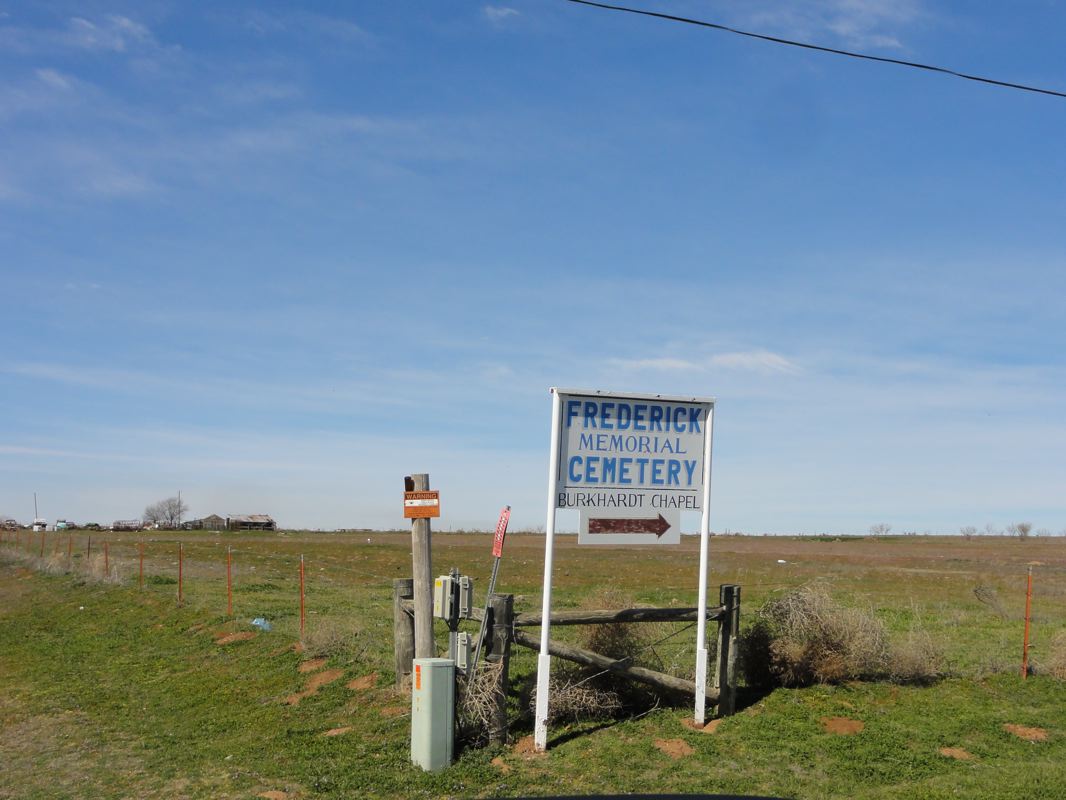 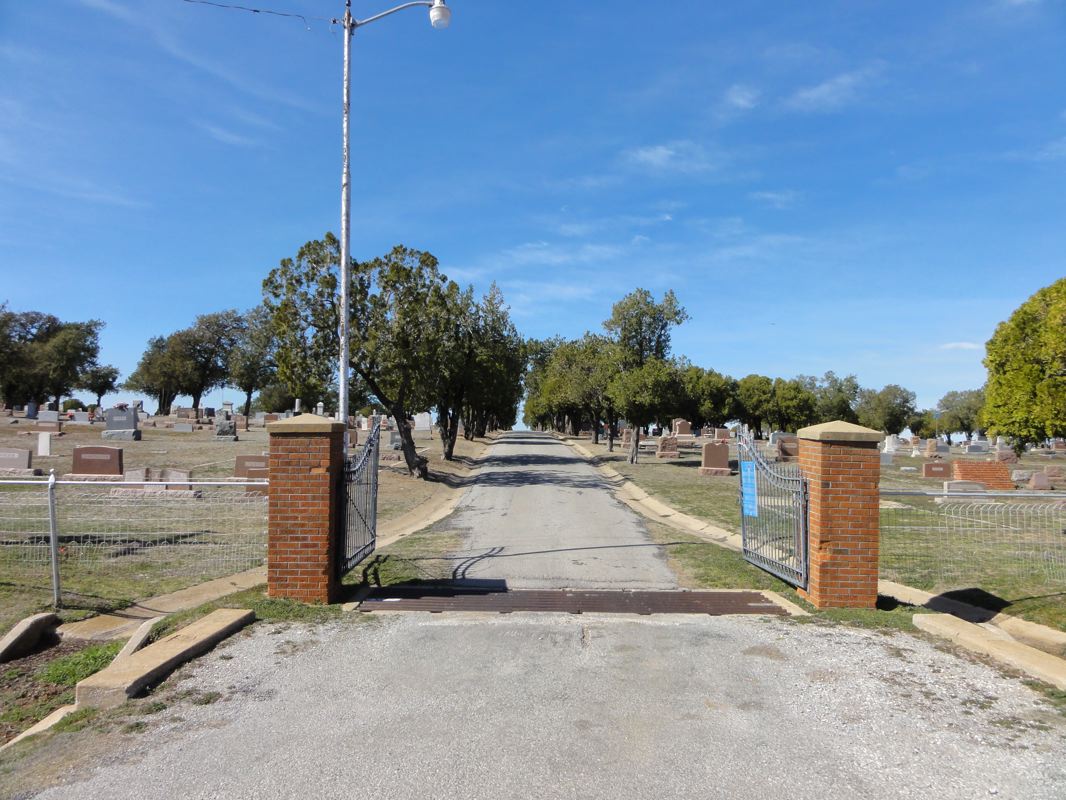 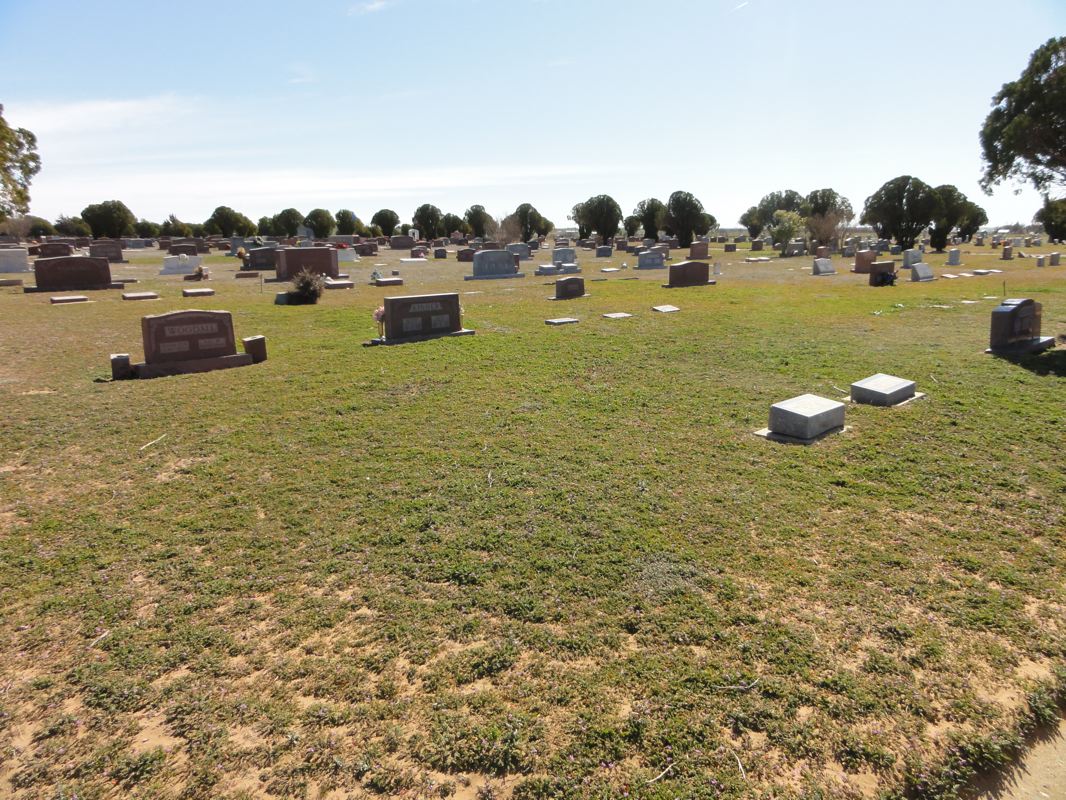 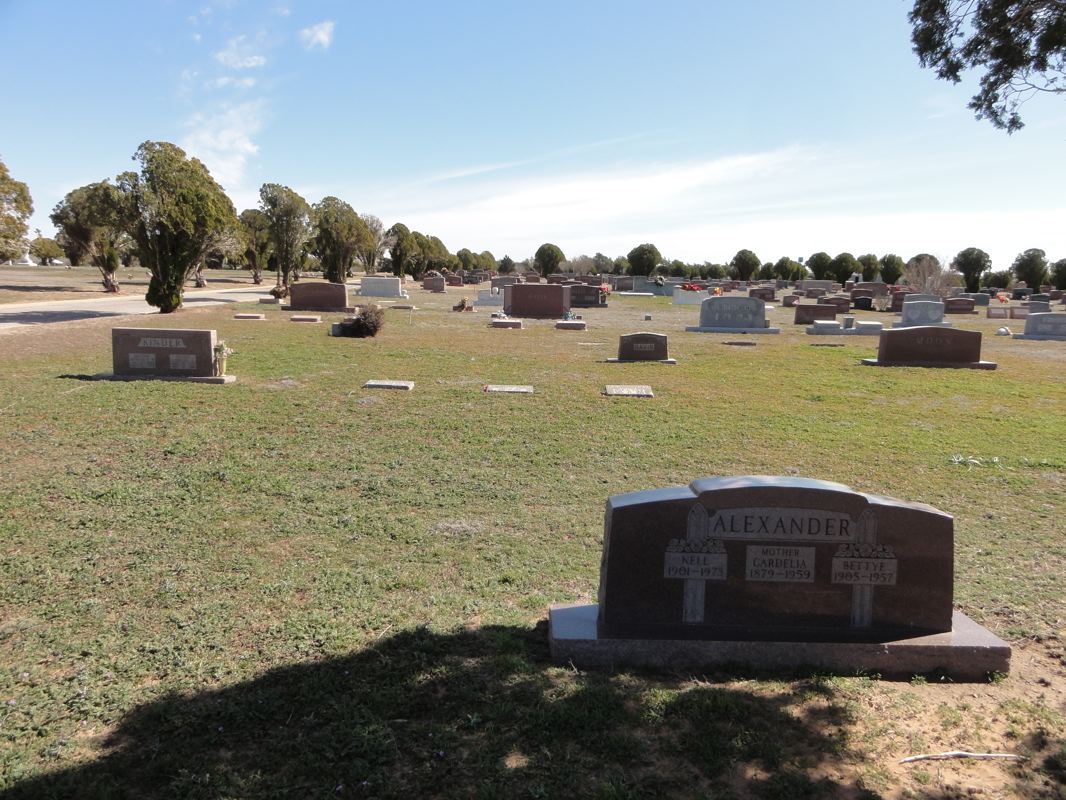 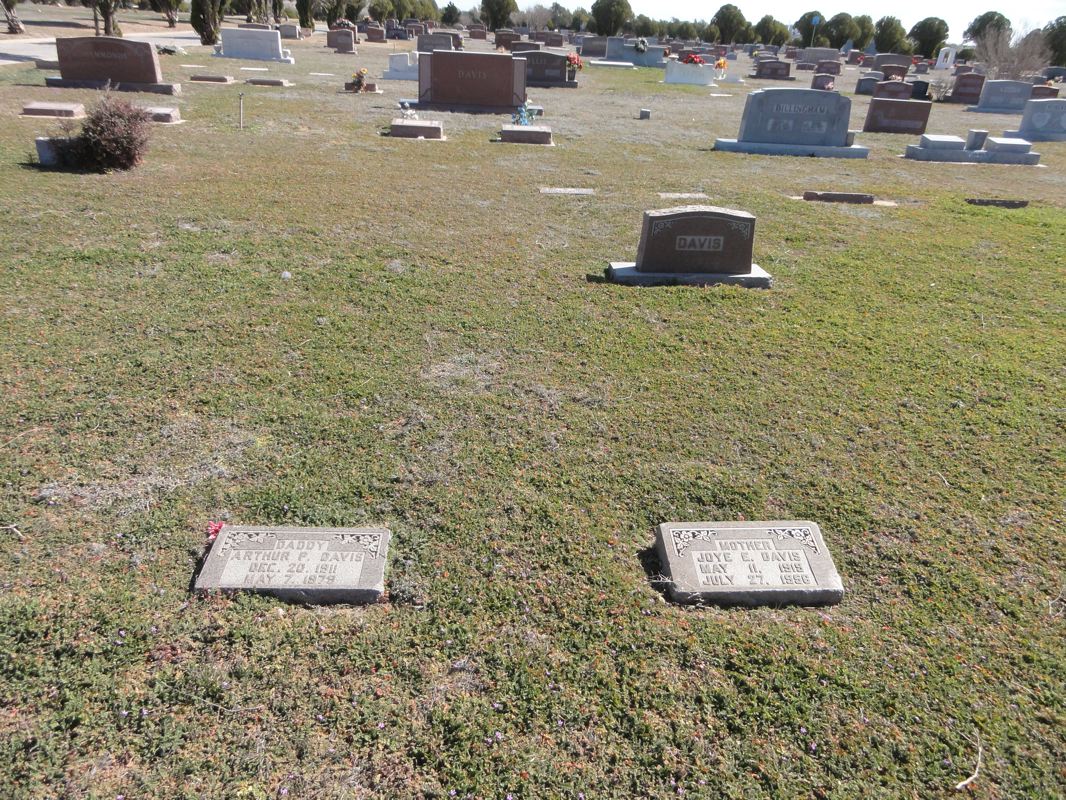 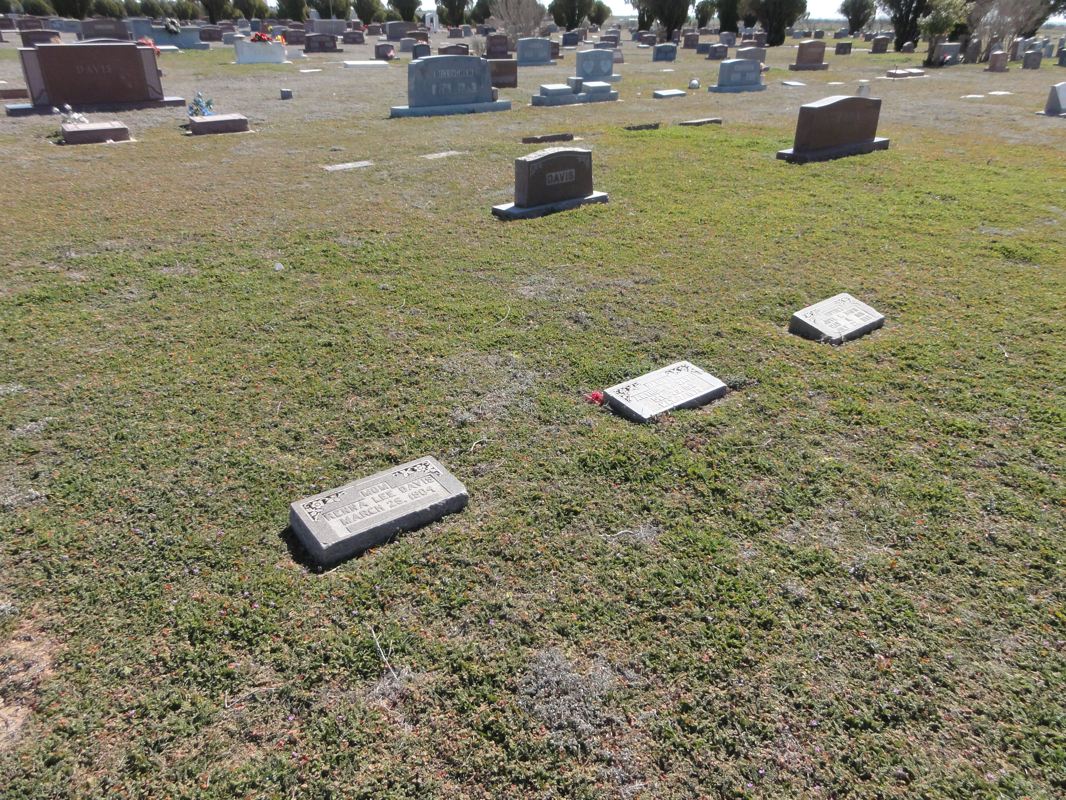 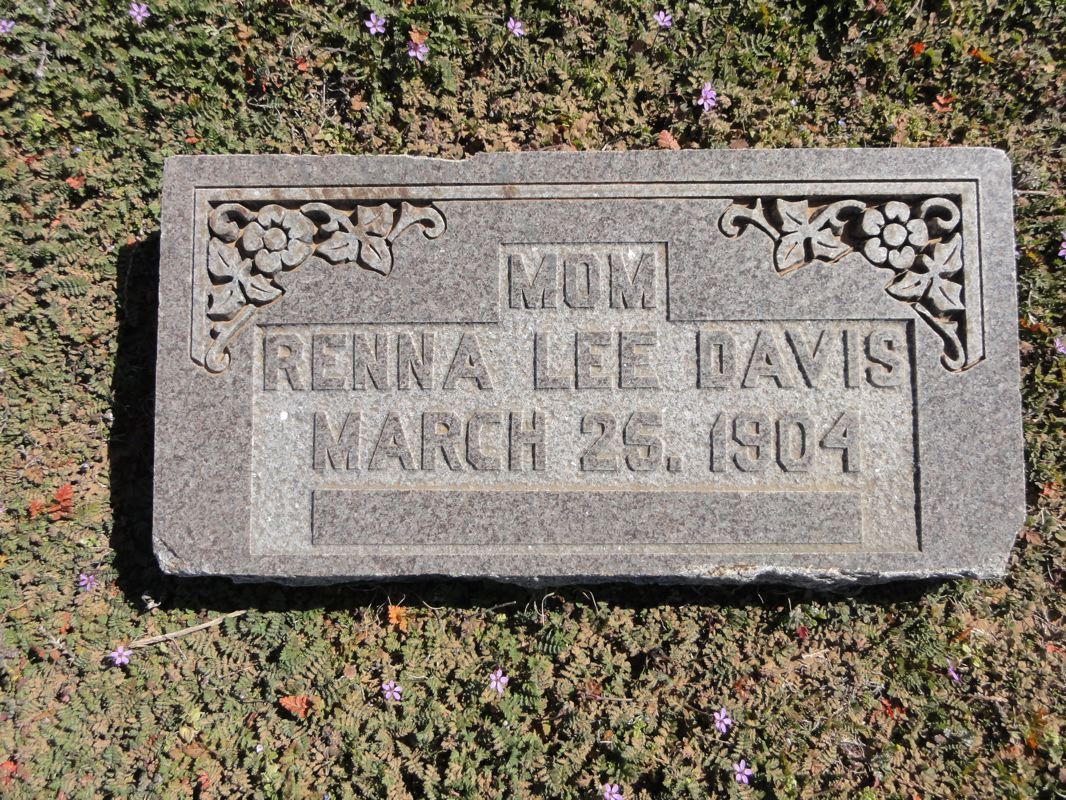 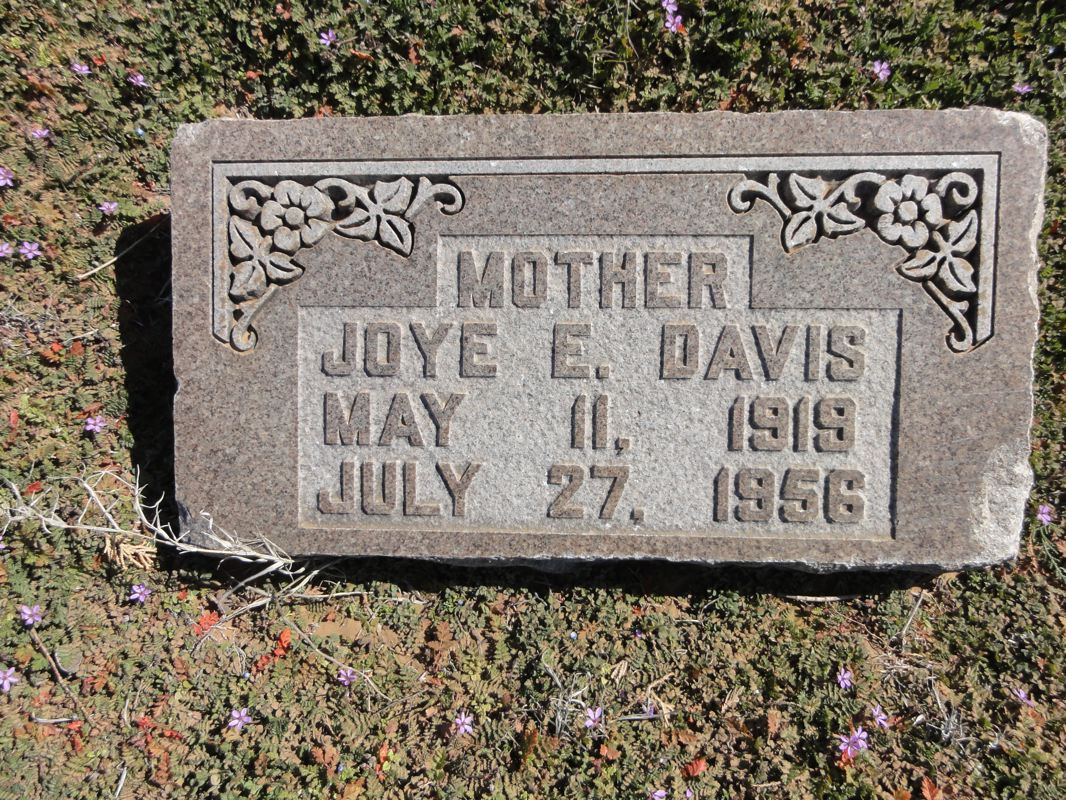 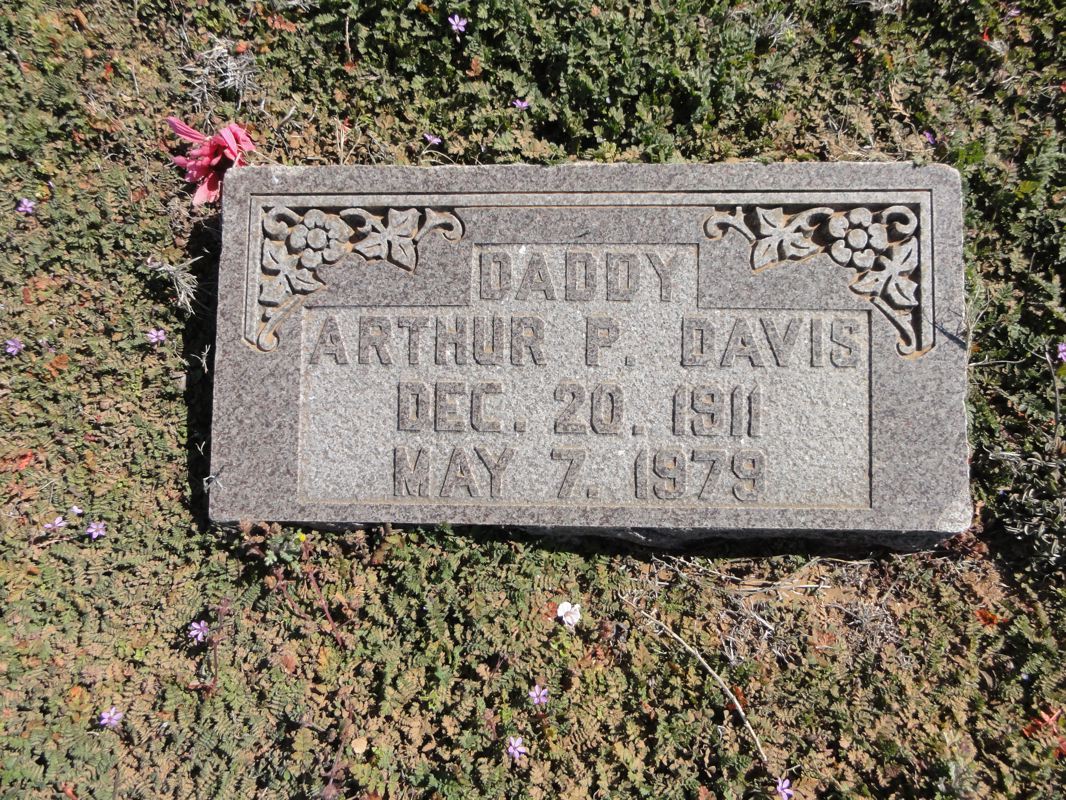